Young People Haul Up a Ton of Debris

This time we had six divers don their gear and jump in to see what was "lurking" down there.  Only to find out that as soon as they jumped in, they couldn't see anything.  The divers this day were: Kevin Augarten, Kim Cardenas, Mark Eaton, Jeff Larson, Dan Prosperi, and Tom Weisel.  Dan drove all the way up from his home in San Diego, is he crazy or what?  Yeah, crazy about a clean ocean!  : 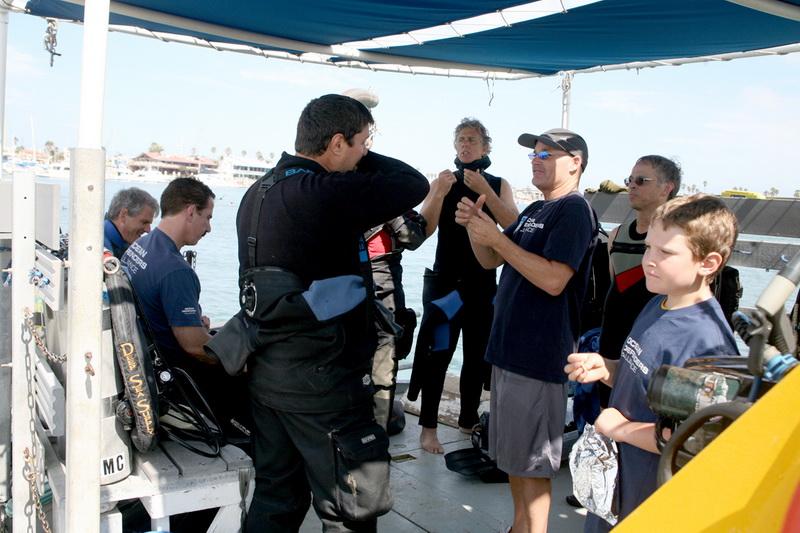 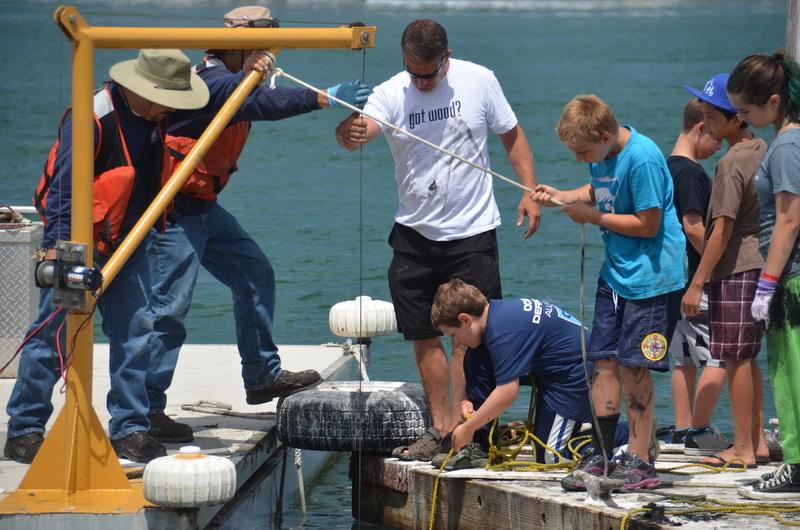 Our volunteers on the docks were: Melissa Beaugrand, Andre Casanave, Lisa Davis, Alani Gonzalez, Vickie Gonzalez, Jim Lieber, Rex Levi (boat Captain), Osidan Morris, Charlie Parker, Christy Parker, Leila Parker, Julia Ransom (still photographer), Connor Upham, Steve Upham, and Kellin Weisel.  Rounding out the troops were Xuan Zhong and Angus Yates, who were there filming the day's activities and are going to create a video documentary for an assignment they are doing at USC's film school.  Stay tuned to see that!  They should have it ready for debut by the end of July.

Jeff Larson jumped in the water first: he was going to film the underwater scene in order to show all of you (ODA's awesome land team!) how much debris was down there.  As soon as he dropped two feet below the surface, he handed the camera right back to me, saying it was useless.  He couldn't see anything beyond his hand in front of his face.

Despite that bit of bad news, the entire dive team made the splash and descended down to the bottom.  Visibility was so bad that they couldn't even see their gauges…so this turned out to be a "dive by braille" expedition. 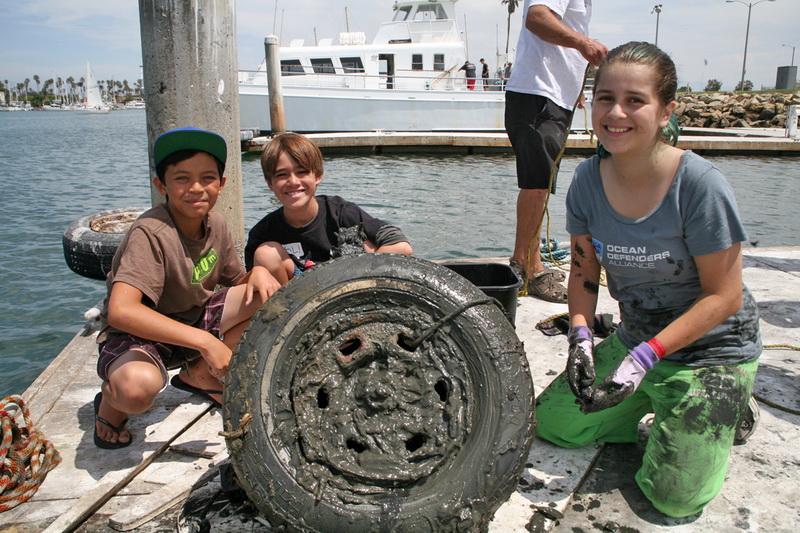 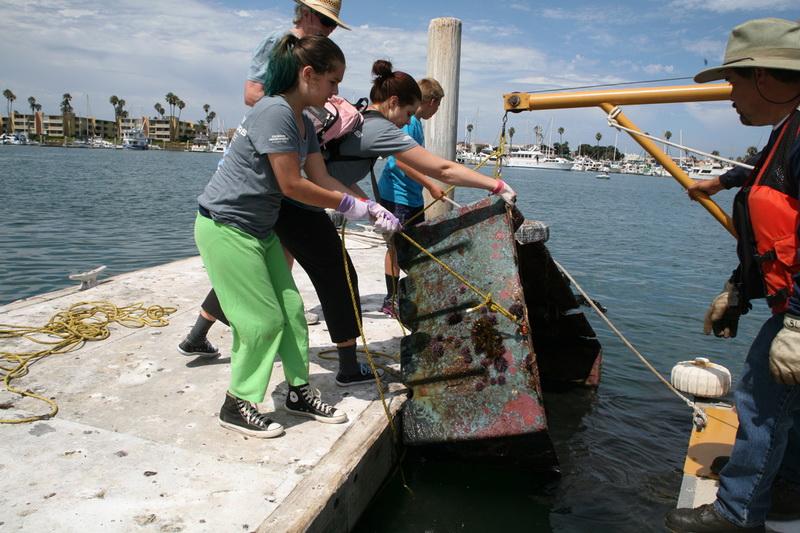 Within two minutes, some of the divers had found stuff and attached the lines that the dock support people had given them, and our hard-working onshore "dock crew" started hauling the debris up to the surface.  For the next two hours it was chaos...and by "chaos" I mean "a hugely productive ocean-cleaning session!"

We pulled up plastic pipes, rubber tubing (some of it was six inches in diameter), hand carts, deck carts, microwave ovens, huge valves of some sort, a fiberglass tub, conduit with wires, large pistons from a diesel engine, a delicate high heel shoe, a bottle of vodka (3/4's filled), a very large metal stair step with railing still attached, a lobster trap, fishing poles, radio antennas, and a slew of other things too degraded to identify. 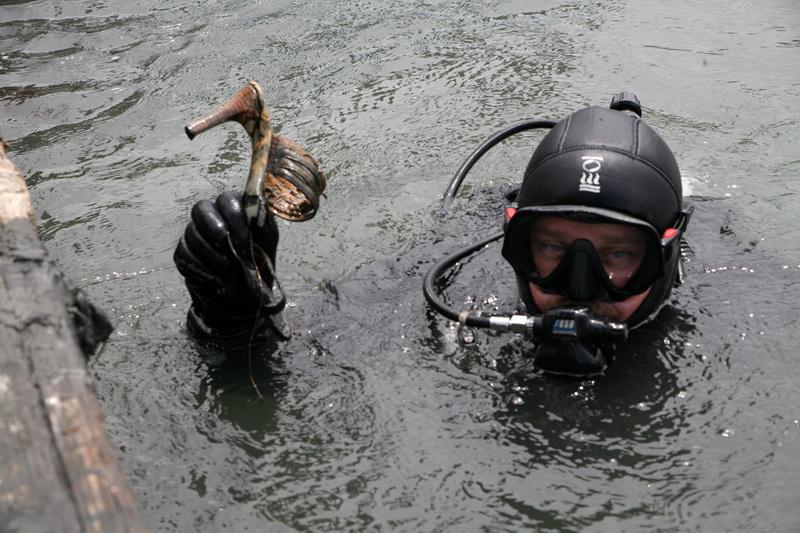 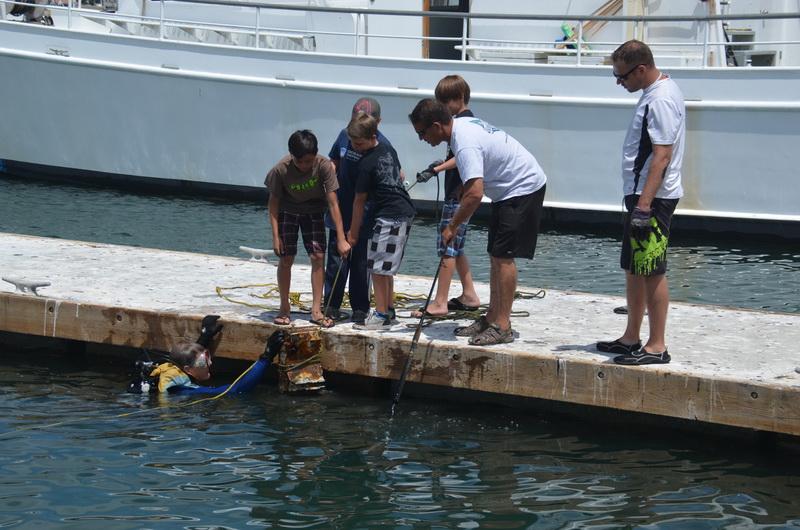 Last but not least (as they are the most offensive): batteries.  Yep, we found five of them.  Four of which were the huge type used to power boat engines.  Each one weighed about 100 pounds.  The batteries are highly toxic and would be leaching lead acid into the water for decades if it weren't for ODA's dedicated volunteers.

By the time we were done, the pile of debris was so high that we had to rearrange things into two more piles, just so it wouldn't fall back into the water.  So, when you look at the pictures, make sure you look at all the piles.  In all, I estimate that it weighed 2,000 pounds-plus or minus a little bit.  Yes, ONE TON!

Many Reasons to Clean the Ocean

As the stuff was being staged to put in a trash bin, we saw several octopuses crawling out and trying to get back into the water.  Just want to remind you that even though these guys can find shelter in the debris, it is NOT healthy for them. 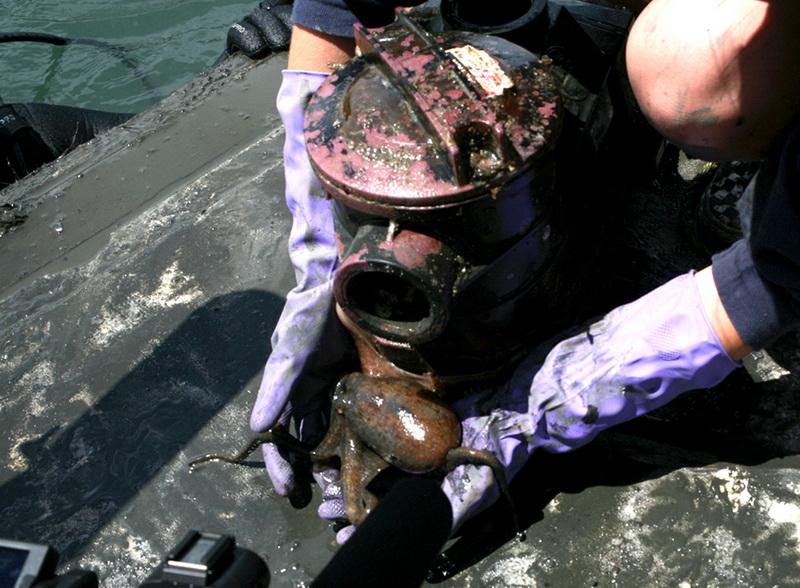 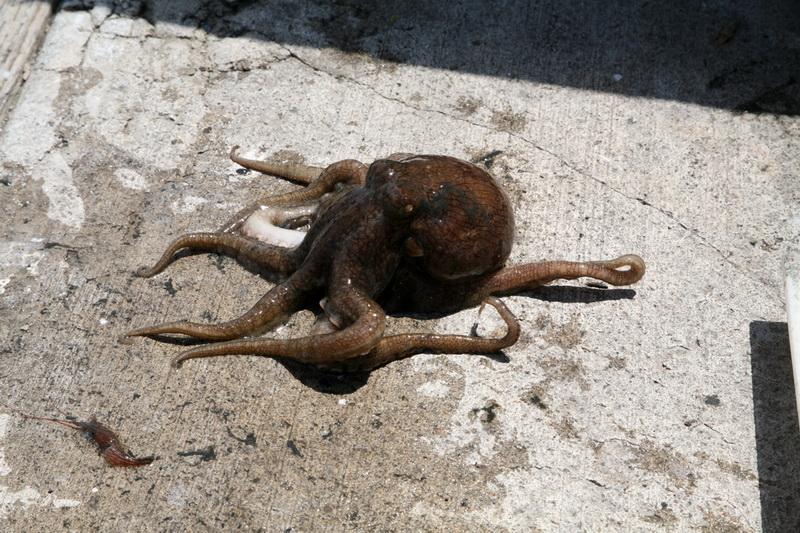 The plastics and electronic gear leach toxins into the water.  This stuff slowly degrades over time, but the toxins build up in the animals' bodies, and they suffer from a variety of illnesses directly related to those poisons.  That is why it is so important to get all this man-made debris out of their homes. 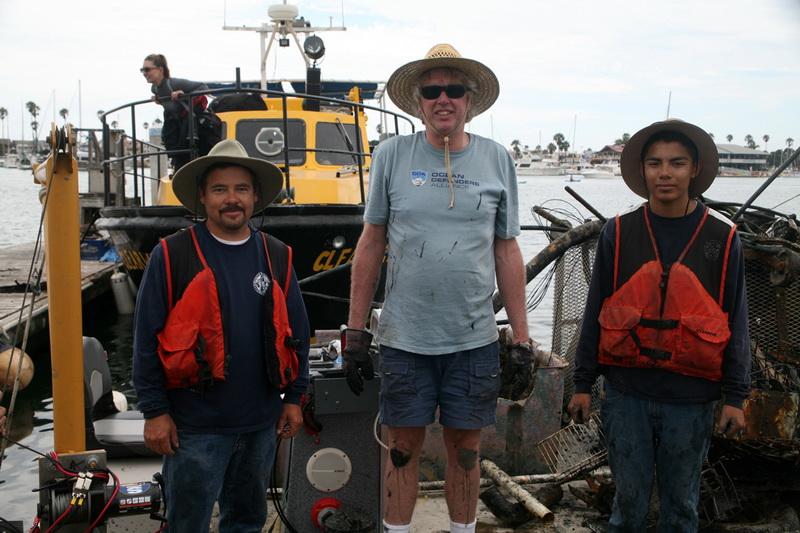 I want to thank all the great volunteers that came out.  Kudos also to the guys from the harbor maintenance crew (Estoban and Chris, pictured at right with me in the middle) who helped us lift the heavy stuff with a crane on their barge.

Even though we all got dirty, everyone was smiling the entire time.  I wish people were more responsible and would not toss this toxic debris into the oceans in the first place, but until that happens, ODA will continue making the oceans safer and cleaner for our friends that call the oceans home. 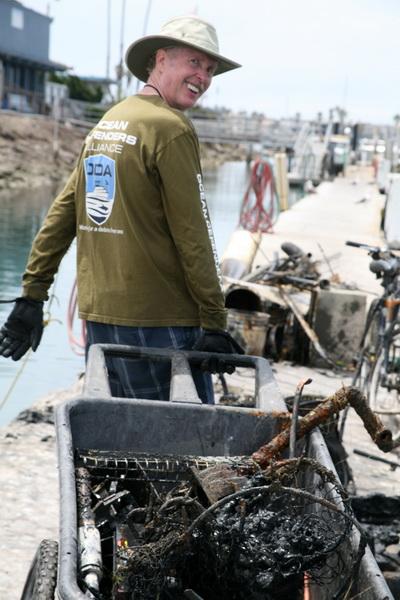 If you want to join us for the next harbor cleanup, please visit our volunteer page. If you can't make it, but want to support our work and help keep this kind of cleanup going, please visit our donation page. Taking care of the oceans takes all kinds of help, so we thank you for doing what you can!

We have a slew more images for you to check out! Click below to start the slide show.