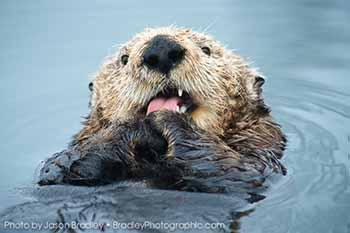 Two articles have been published by the Los Angeles Times this month that remind me why—like never before—we need sea otters back in our waters.

One article covered a legal action seeking to overturn the cancellation of the "otter free zone" law that confines sea otters to a narrow strip of ocean along the central coast of California.  The other article delves into the topic of removing urchins from the coastal waters just off of Palos Verdes by enlisting hordes of scuba divers.  The plan is that they will be armed with hammers and other devices to smash the urchins.

Are you wondering why these two issues are related?

One of the reasons California's coastal waters are so rich with a wide variety of fish and invertebrates is a beautiful and biologically important plant called giant kelp (Macrocystis).  This particular kelp provides a variety of functions to underwater ecosystems by providing habitat for fish to breed in, refuge from predators-and for animals like seals, sea lions, and sharks it offers a place to hunt for a meal. 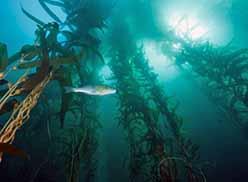 Kelp also helps protect our beaches, bluffs, and coves from the fury of waves that are generated by the powerful winter storms that come every year.  Kelp serves as a shock absorber, and the force of the waves are greatly diminished by a healthy kelp forest.

In 1982-83 our region experienced an unusually warm El Niño event, which by some estimates, wiped out 90% of the kelp.  It has never returned to its previous abundance due to several factors: pollution, kelp harvesting, and an explosion of the urchin population.

Urchins eat the roots of kelp plants, called "holdfasts."  Urchins are so good at devouring the holdfasts that they create entire zones where kelp cannot grow at all; these are referred to by many divers as urchin barrens.  Kelp forests harbor up to 800 different species of marine life!  How do urchin barrens compare?  They harbor almost none.

There are three main predators of urchins here in California: lobster, sheephead fish, and sea otters. 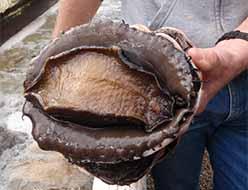 Back to my original point: one of the otters' favorite prey is abalone.  Historically, abalone ranged in huge numbers up and down the coast of California.  Blaming otters for the decreasing abalone populations, the commercial and sport fishing communities put pressure on the CA Department of Fish and Wildlife (DF&W) to ban otters from the waters of Point Conception (near Santa Barbara) all the way south to the Mexican border.  This law went into effect in 1986.

Unfortunately for abalone and those of us who like to see them in their natural habitat, humans have found them to be very tasty, and today a single abalone can command a price of $200 on the black market.  There is a huge demand for them, hence the high price.  Abalones were declared commercially extinct in southern California in the late 1990's, and the take of abalone was banned.  Note that the abalone disappeared during the time that the otters were banned. 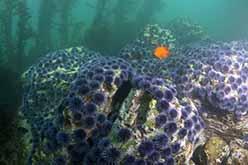 Now we are left with an ocean habitat that has been severely degraded because the otters are no longer down here doing what comes naturally to them: eating abalone and urchins.  The urchins are out of control and destroying not only the kelp beds, but also the many fish communities that used to call these forests home.

The DF&W thankfully came to their senses in January of this year and threw out the law that banished otters south of Point Conception.  They realized that the otters don't understand a line on the map that humans have created, and they acknowledged that the otters need to expand their range if they are to maintain a healthy population.

However, the commercial fishing community doesn't want the otters to come back.  They want all the shellfish and abalone for themselves, so they can continue to sell them.  Hence the lawsuit trying to re-instate the absurd and wholly unnatural "otter free zone."

What is missing from their logic, I feel, is that in time, with the otters re-establishing themselves in our waters we will see the kelp come back to a semblance of its former glory—and with the kelp will come greatly increased numbers of fish.  Everyone will benefit: from the tourists who want to see otters, to the sport and commercial fishing interests who will have more fish to catch, to the sport divers who enjoy the peace and tranquility of swimming amongst the giant kelp.  One need look no further than Monterey and Pacific Grove to see how much money "wild otter sight seeing" brings to a local economy; much more than fishing-and it is sustainable.

Please keep abreast of this issue, and oppose this ridiculous lawsuit by the Pacific Legal Foundation.  Future generations will thank us for our foresight.

I am not saying that otters will cure all of the ills that our coastal waters are experiencing, but bringing back wild otters is one thing we can do at no expense to us, and the gains over time—both biological and economic—will be enormous.  Otherwise it will take an expensive and heroic undertaking by hordes of divers with hammers to keep the urchins at bay.  What would you rather see: an army of divers with hammers?  Or otters armed with stones that they use to crack open an urchin for a meal?