The new crews forming Ocean Defenders Alliance Hawaii (ODA-HI) continue to “make it happen!” As summer changes to fall, we are forging more allies, finding additional debris-removal opportunities for the near future, and actively foraging for marine debris to remove!

It is also my pleasure to tell you about a new friend of ours; a hard-working and dedicated ocean conservationist.

While on the Big Island of Hawai'i, I had a meeting with Megan Lamson and some of her colleagues at the Department of Land and Natural Resources (DLNR).

I spoke with them at length about ODA’s work with various government agencies in California, including our friends at the Channel Islands National Marine Sanctuary.

I explained how ODA helps the people and agencies responsible for various protected lands—and how we hope to establish a similarly collaborative relationship with the DLNR. They seemed very receptive, and let me know about others in the area to contact who might be helpful to our alliance.

Megan and the rest: If you are reading this, thank you for your time, and I look forward to future conversations!

In addition to her great work at DLNR, Megan volunteers with a group called Hawai’i Wildlife Fund (HWF). As their Vice President, she has been coordinating the Hawai'i Island Marine Debris Removal Project and anchialine pond restoration projects in southeast Hawai'i for HWF since 2008.

This group has done some amazing things here. One of the most interesting, to me, is that they have removed about 100 tons of marine debris from a single beach on the south side of the island called Kamilo Beach. I had read about this beach and really wanted to have a look for myself…so I was excited when Megan asked me to join her for a beach cleanup there on Monday, September 4th.

When the day came, I headed to a spot along the road to meet up with her and her volunteers. Because it was a holiday, Labor Day, she only had one volunteer show up. Nice to meet such a dedicated ocean defender as you, Sam! 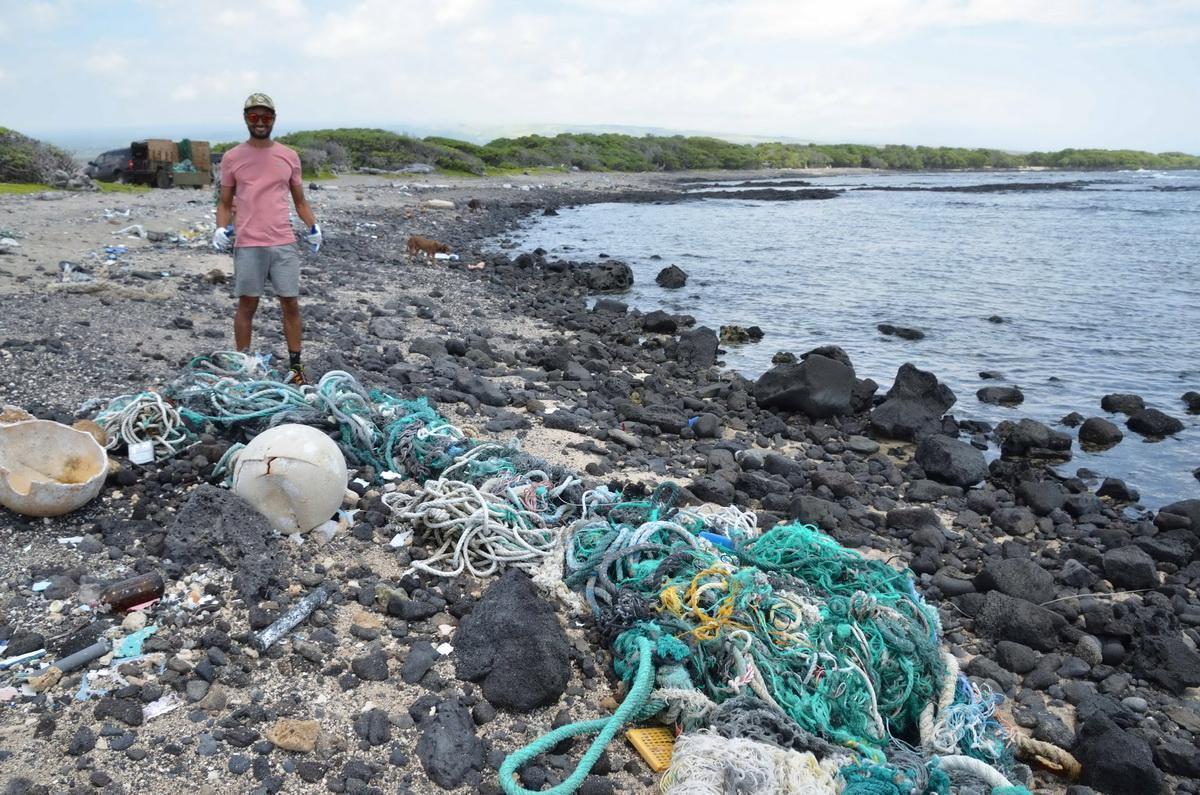 Being the trooper that she is, the lack of people didn’t sway her at all, and soon we were careening down a rough road and headed to that beach. 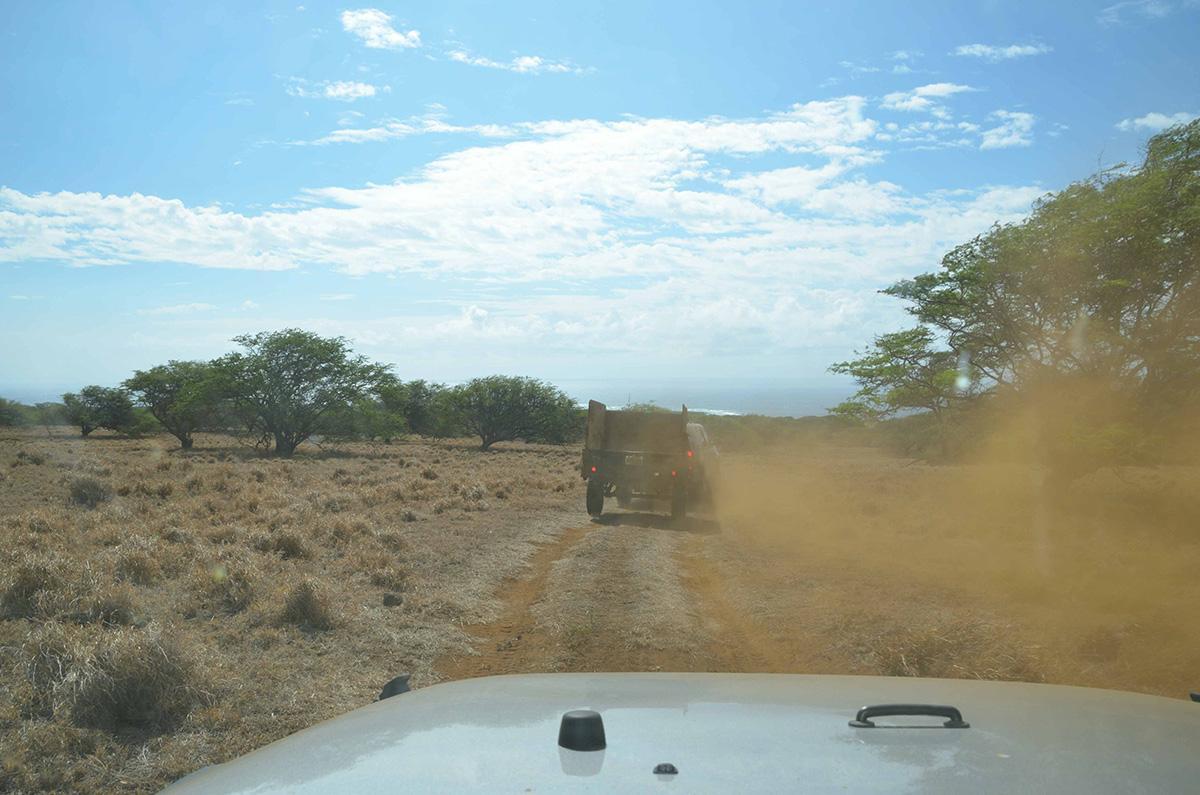 I think the Romans had better roads! It took us an hour and a half to go something like seven miles! It was a hellacious ride and I was relieved when we finally exited our vehicles. Relieved, that is, until I saw the beach…

Smothered in a Blanket of Deadly Debris

I’ve seen a lot of beaches trashed by plastics, but this was like nothing I had seen before. Plastics of every sort, size, and color you could imagine. From fishing nets to boat fenders, and tooth brushes to trap lines. 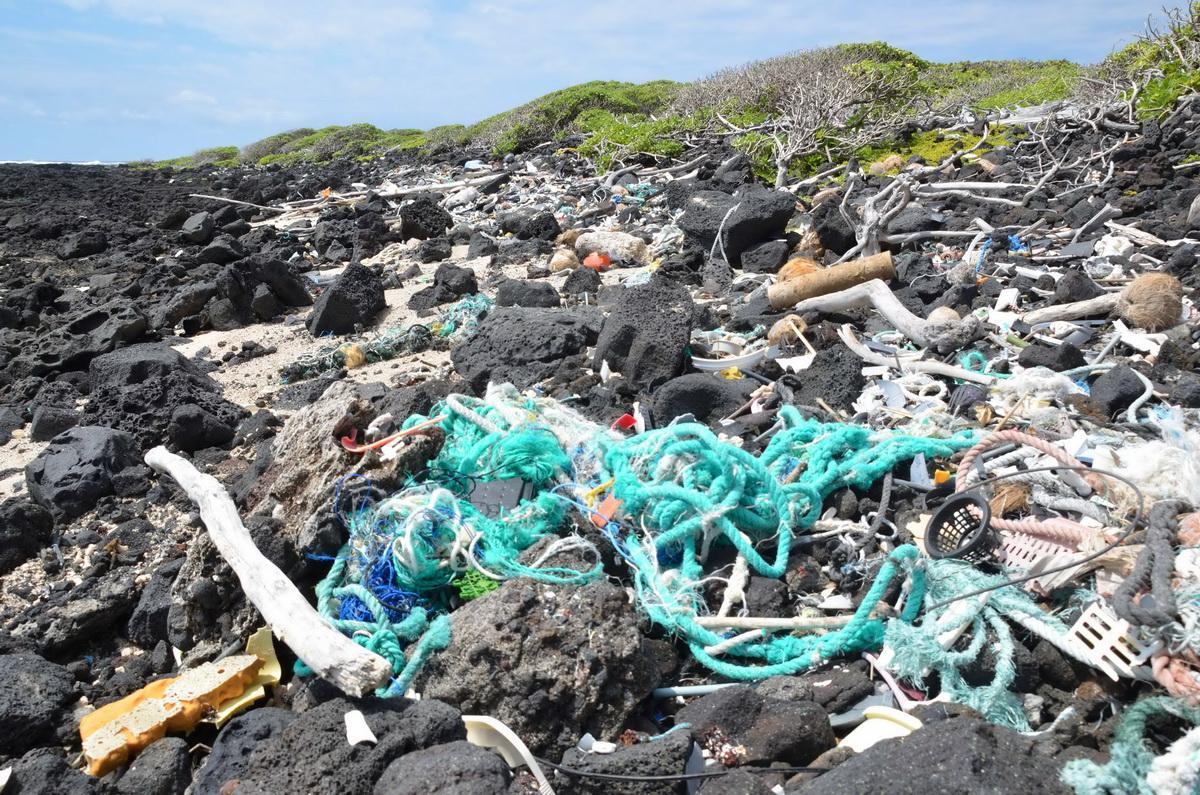 Here you can see Megan hauling out 1,000 feet of trap line. 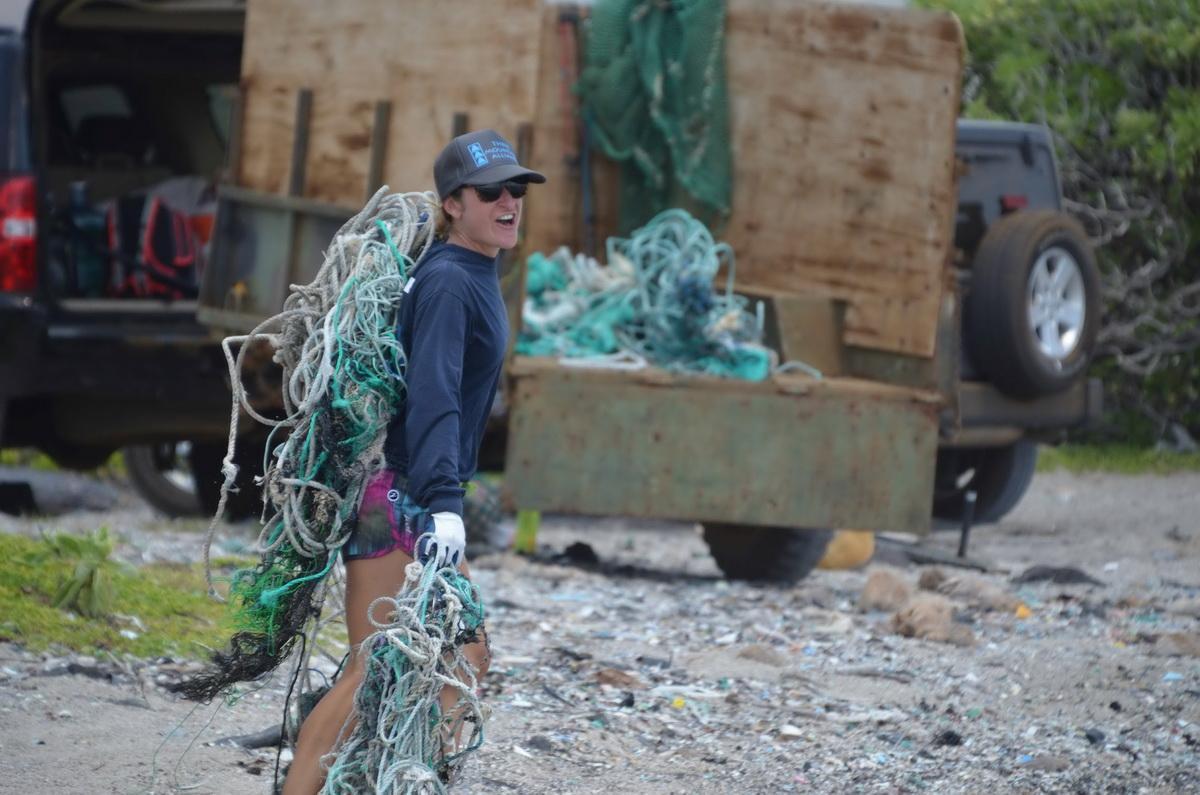 This is the kind of line that is made out of polypropylene, and scientists estimate will last about 450 years in the seas. That is, unless someone does something about it. Which is what we at ODA do!

I found one fishing net that was in the high tide zone. It was bright green and had to be new because there was no growth on it at all. 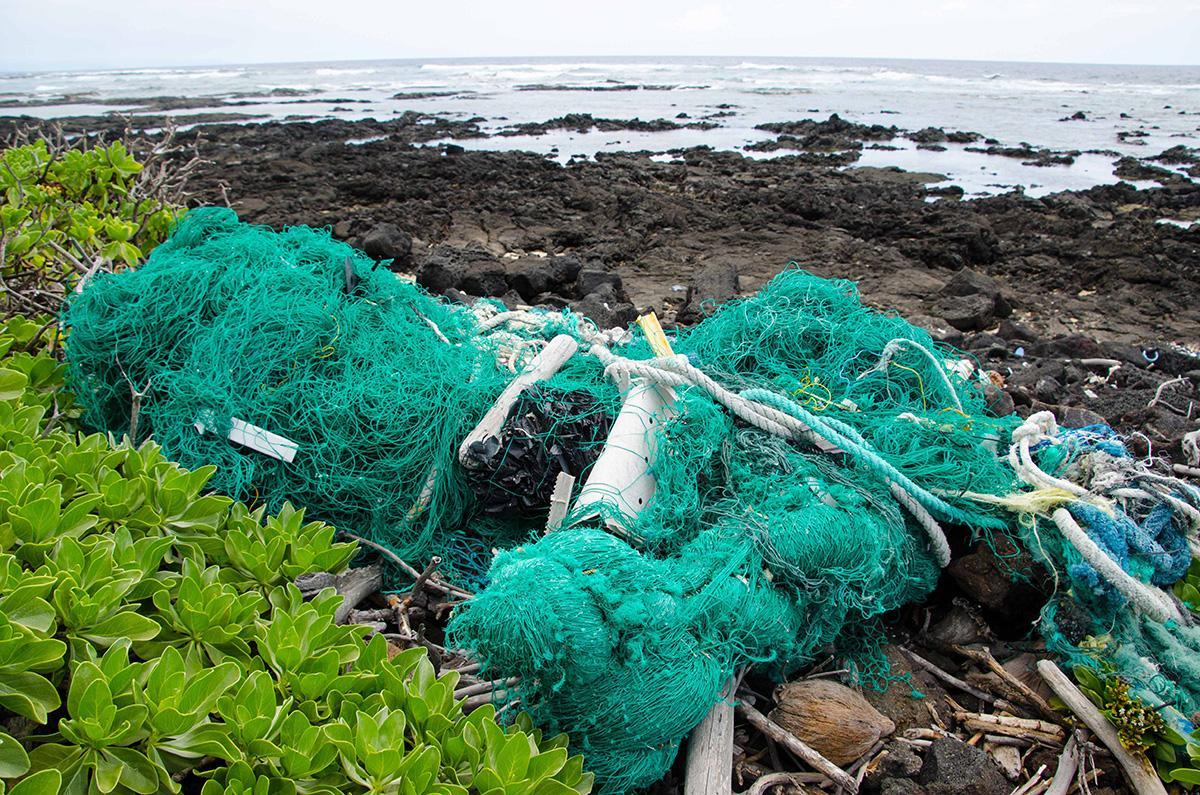 When I tried to move it, I tugged at one small section of it and couldn’t even budge it. Megan and her team went back to get it later; it weighed 800 pounds!!

HWF owns a truck and trailer. Wow, did those ever come in handy. We removed about 1200 pounds of debris, 600 of that was nets.

After roughly three hours of slogging this stuff off the beach and into the trailer, we had the trailer ¾ full and I was fully out of energy and strength. 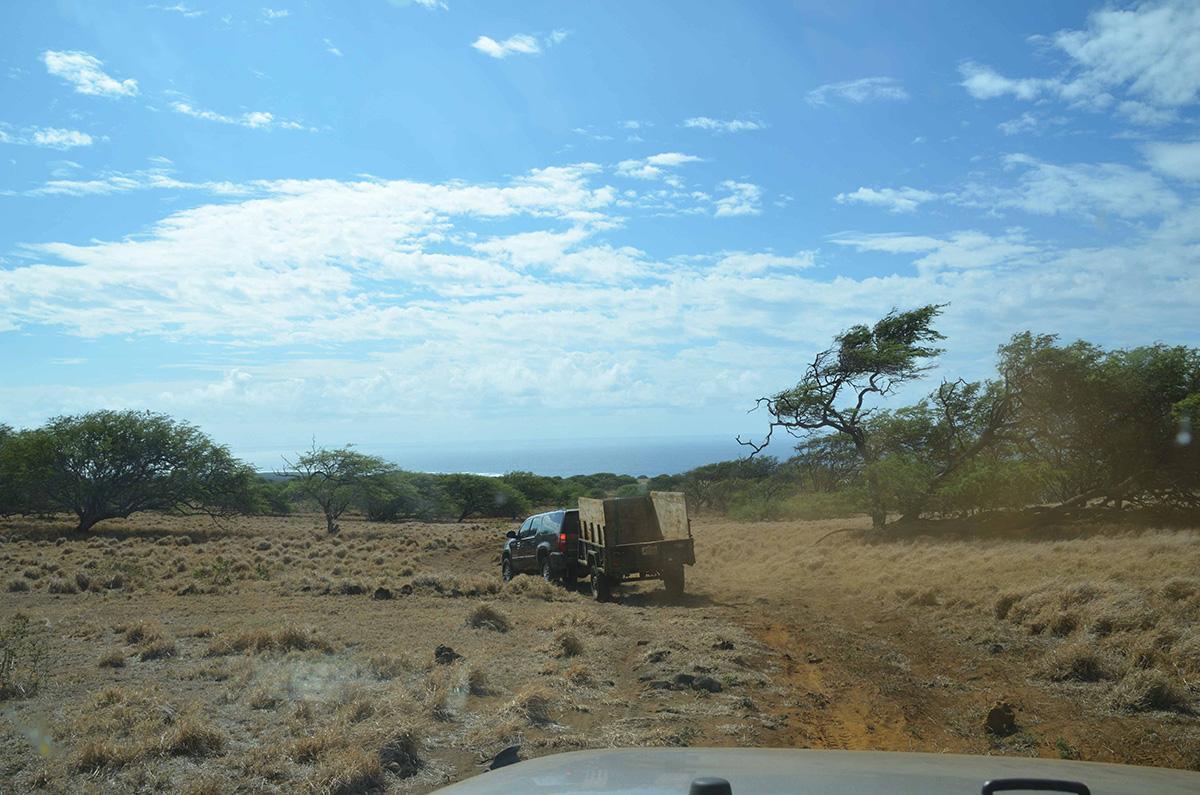 We then made the return trek, which was even worse than the ride in because it was the heat of the day and we had to go uphill the entire way.

My hat is off to Megan and her crew. This is exhausting work that never ends. Once you’ve got the beach semi-clean, the next high tide delivers more of the same.

Constant Stream of Debris from the Pacific Gyre

This part of the island just happens to reside smack dab in the middle of where the Pacific Gyre delivers its contents from what has become known as the Pacific Garbage Patch. This is where much of the plastic that finds its way into the ocean gets caught up and brought together in a huge swirling vortex of currents, wind, and waves. And when these currents hit land, usually a remote island, its contents are pushed up onto the beach. 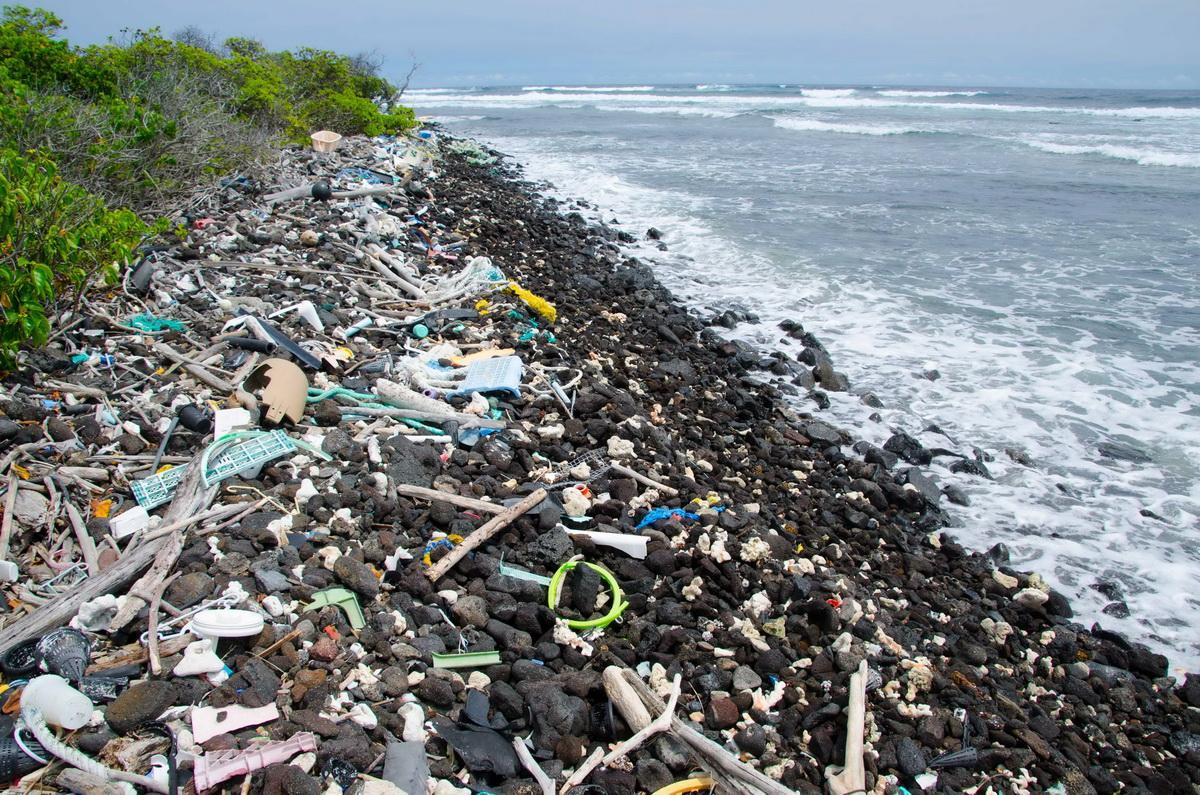 The Garbage Patch affects more than just water and beaches. Sea birds, turtles, sharks, whales, and dolphins often mistake various debris for food. They end up ingesting a lot of this toxic waste. When they consume this debris, they are not only harming themselves, but for those humans who eat seafood, you are ingesting ever-increasing amounts of the same pollutants.

While it was very disheartening for me to see so much needless waste, it also was empowering. Every day we gain more knowledge about the scope of the problem. The big question is, “Will we humans be able to stop polluting our oceans before it is too late?” Scientists predict that if we don’t significantly change our consumption-driven ways, by 2050 there will be more plastic in the ocean than fish.

There is Hope…And You Are Part of It

That, my friends, is a future I don’t want to be a part of, and I’m sure you don’t either.

I hope you will join me and everyone else at ODA—in any way you can: by diving, working on the boat, helping on land, or by funding our ongoing cleanups.

Let’s come together and do our part to ensure that the oceans, and therefore all of us and all sea life, have a chance. As air breathers, we depend on our oceans for 70% of our oxygen.

We’d love to work side-by-side with you on the Big Island. Please check out our Crew Application if you’d like to be a deckhand or diver, or have a look at our Onshore Volunteer Application if you’re interested in other ways to help, such as coordinating volunteers, manning an information table, or helping to raise funds to fuel the boats. Please also remember that you can make a donation any time through our website.