It’s nice to have friends helping ODA out…

One of our longtime dive volunteers, Mike Wynd, sent me an email letting me know that he had come across three abandoned lobster traps on a recent dive he had taken. 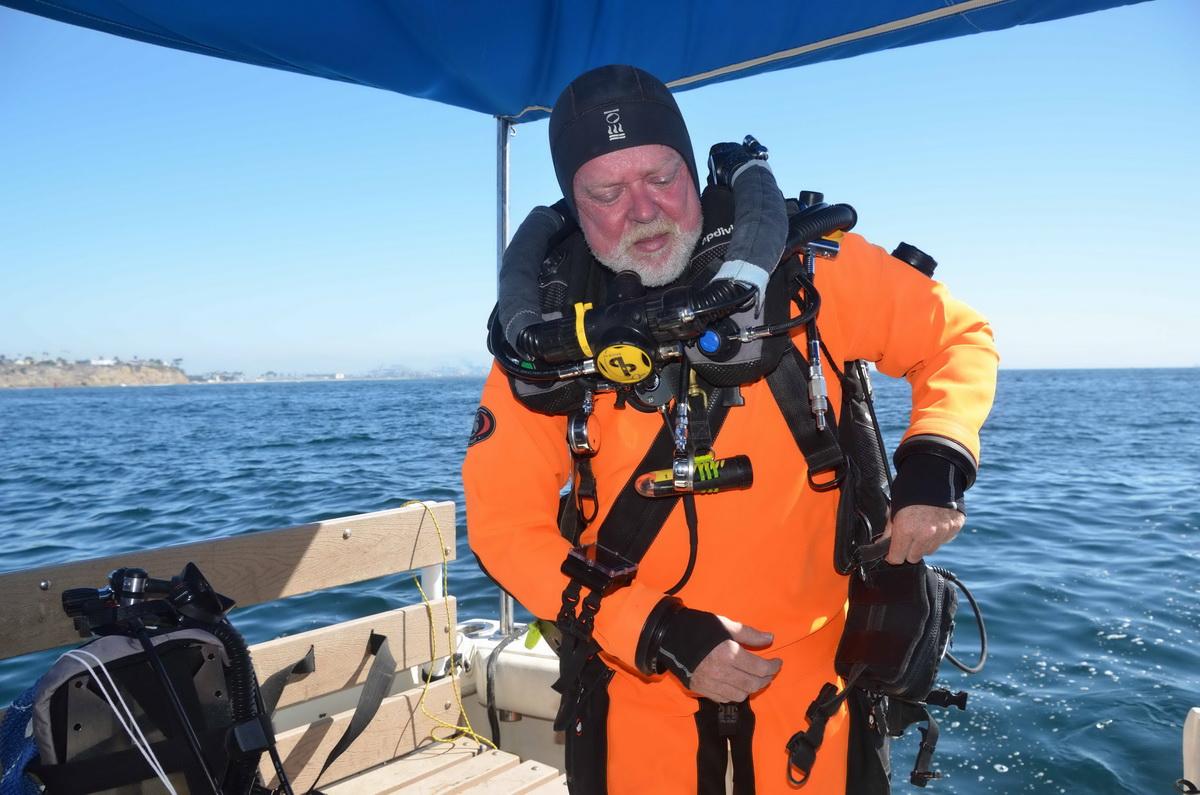 Since we were already scheduled to go out with a dive team, we simply mapped out a new route so we could try to locate and remove the traps.

So, on Sunday, October 6th, a boatload of divers and crew headed out to sea, to get to work removing this derelict fishing gear from our coastal waters.

This time out, we had several new volunteers join us including Kyle Krull, Alvin Weinberg, and Lisa Weinberg (who took most of these pictures). 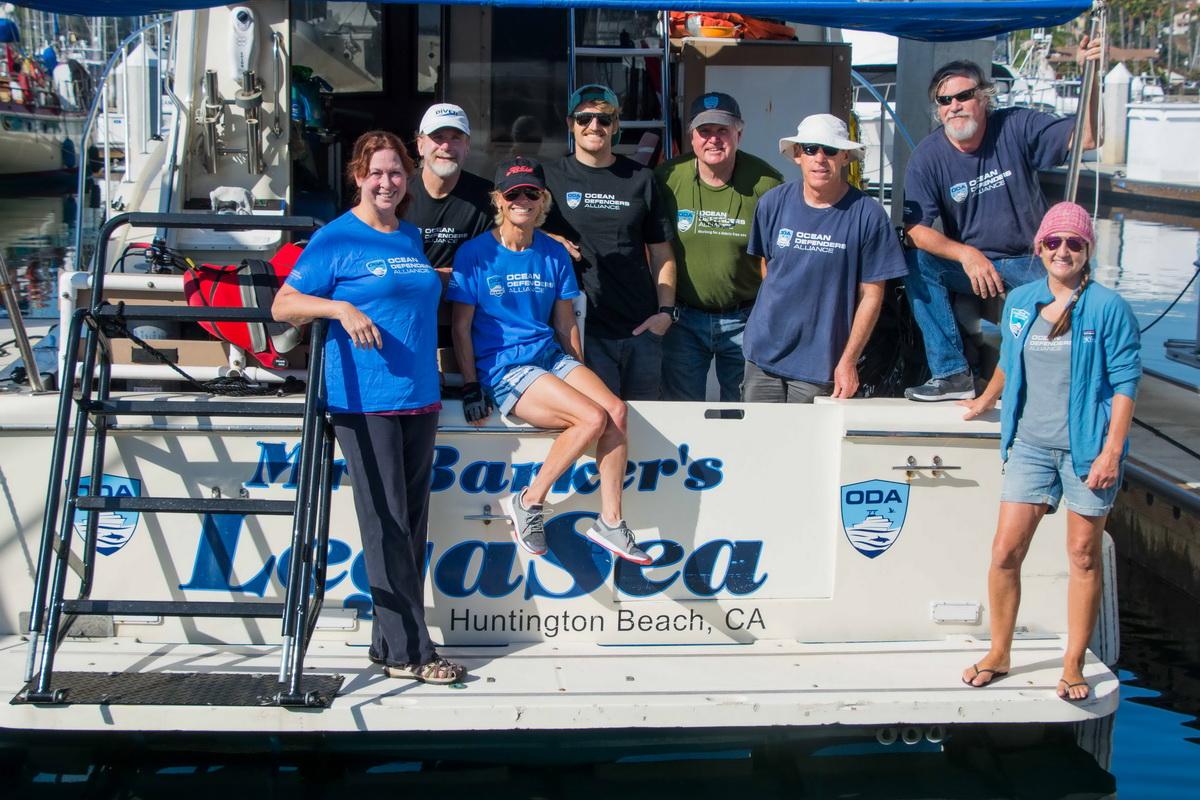 Kyle and Alvin joined our longtime divers Kim Cardenas, Al Laubenstein, and Geoff Walsh to round out the dive team.

Helping out on deck were Jeff Connor, Sue StSure, and Lisa.

Rolling with the Punches

Before we left the boat slip, we took the RIB (rigid inflatable boat) off the boat and put it in the water so we could use it in the debris recovery process. We quickly found the battery was completely dead, and it wouldn’t start.  NOT a good start for our day.

So, we put the RIB back on our flagship vessel Mr. Barker’s LegaSea and pushed off.  The area where Mike told us to look was really close by; in fact, we hardly had to leave the harbor.  It was just outside the mouth of the Los Angeles harbor entrance. 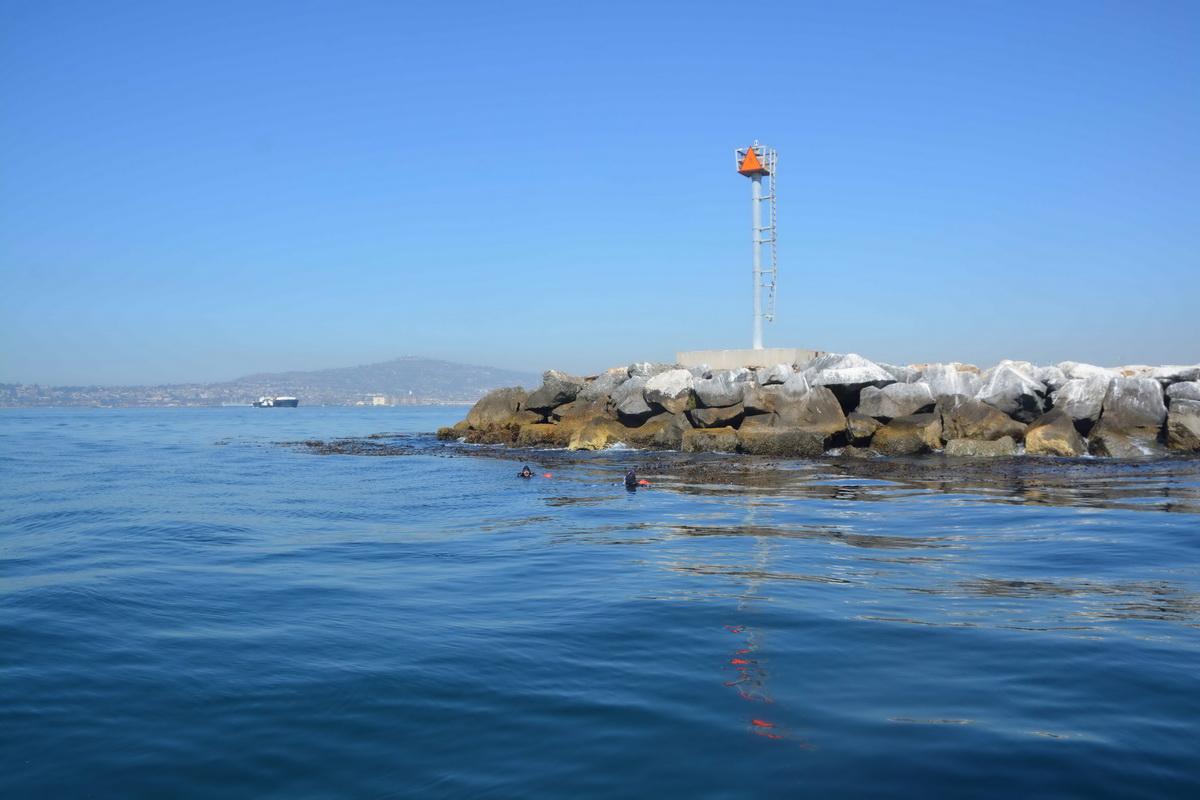 Because we didn’t have the RIB to assist us with, we had to do what is called “live boating.”  This means I would not drop the anchor and we would use the LegaSea as our safety boat.  I kept the engines running so I could move the boat close to the divers in case another boat came near, or if the divers needed help in any way.

We dropped Kim and Geoff off first, and within five minutes we saw the first lift bag pop up. This means that the divers had located debris and attached a “float bag” to it which when inflated then pulled the debris to the surface.

Five minutes later and another was floating nearby.  By then Kyle, Al, and Alvin had dropped down and they sent two more bags up. 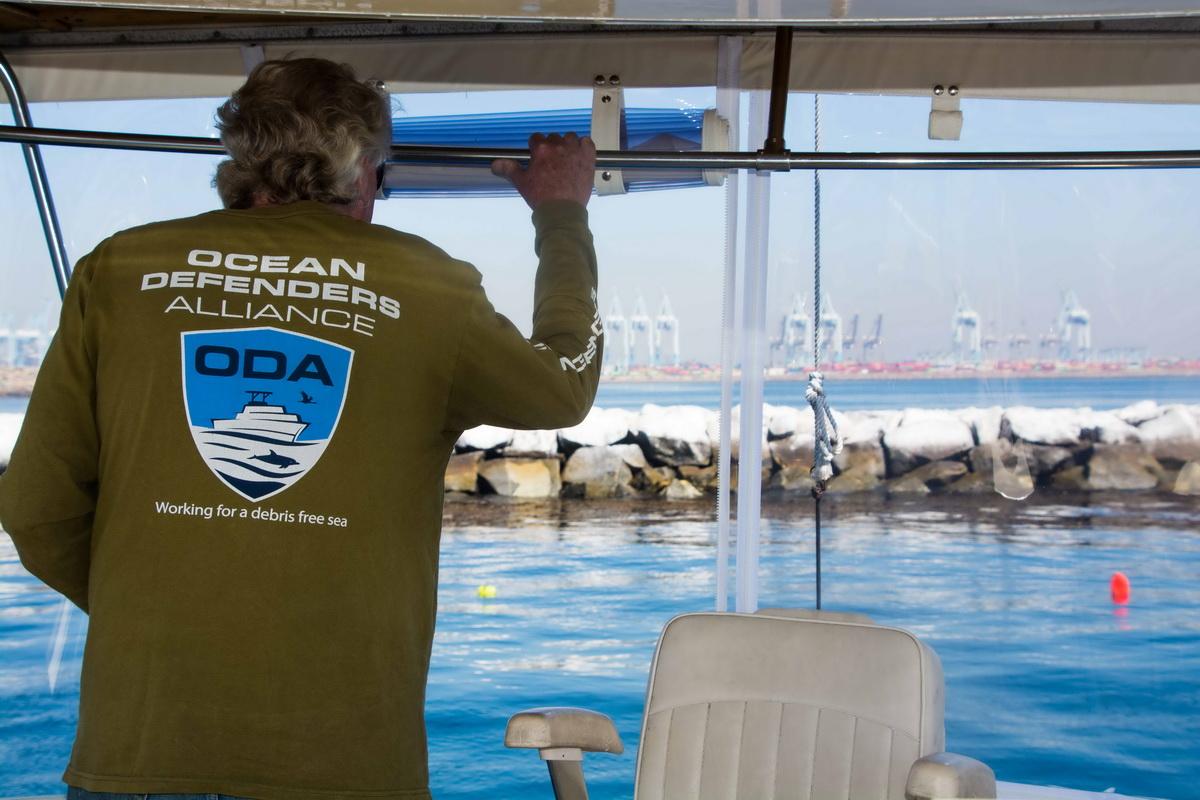 Before they were finished, we had five lift bags bobbing right near the breakwall.

We Got Our “Booty”

As soon as all the divers had surfaced, I got the boat relatively close to them and they climbed aboard.  Kim and Geoff stayed in the water and one by one, dragged the lift bags out away from the breakwall so we could position the boat to get whatever debris the bags were attached to hooked up to the line on our davit (crane) and then haul it out. 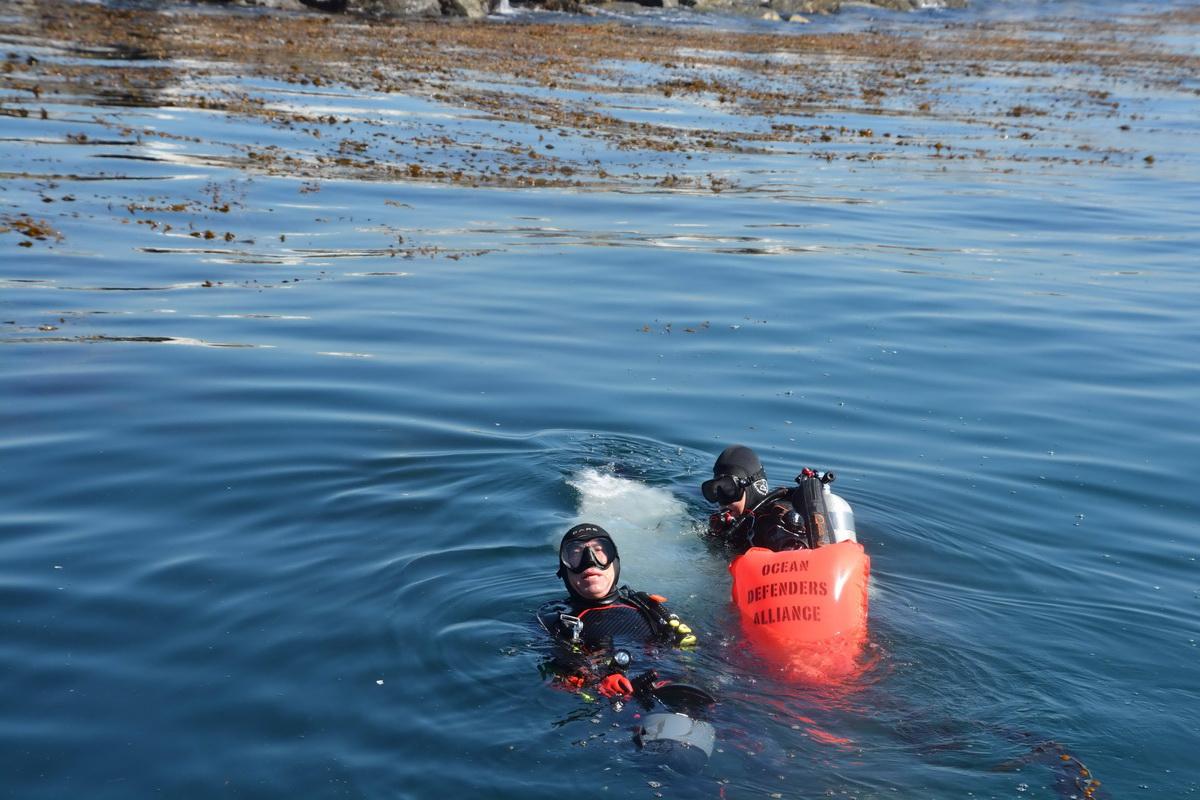 For the next 40 minutes we repeated these steps and soon had three lobster traps, one hoop net (which is used by recreational fishermen to catch lobsters), and one anchor on the front deck. 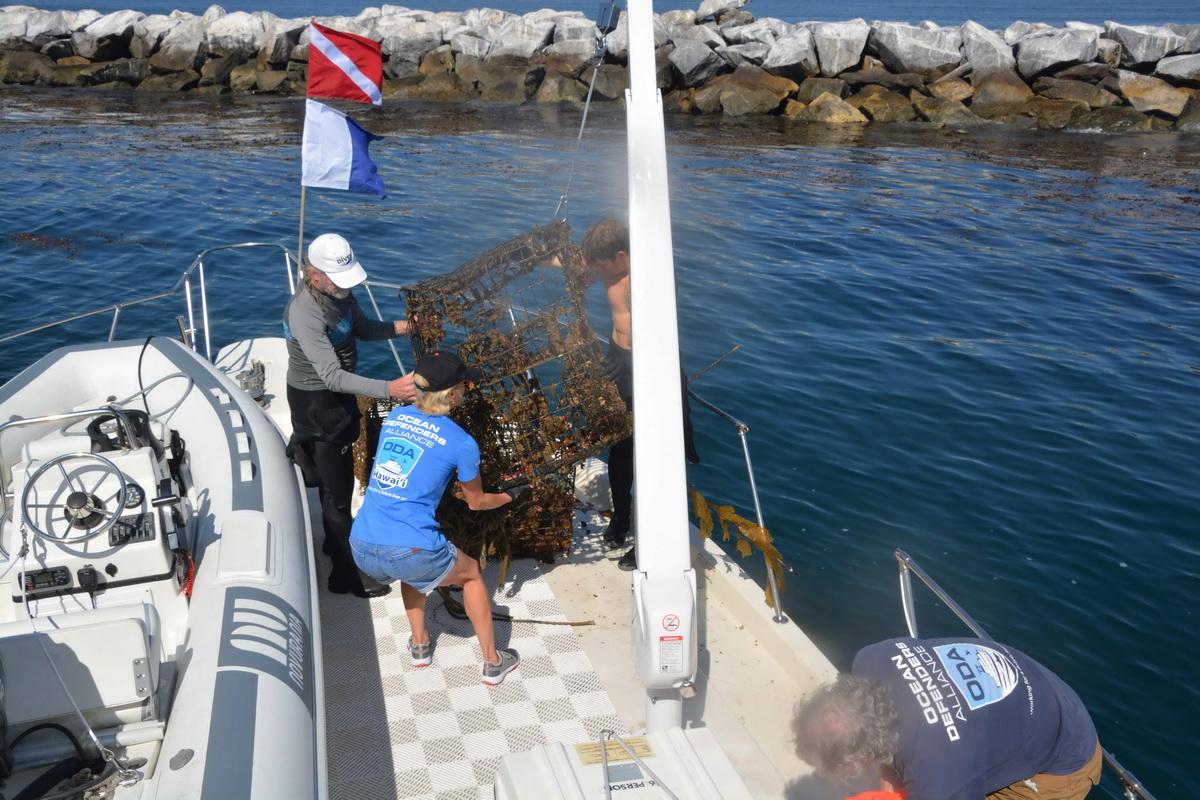 After that, we headed out to a site we haven’t visited for about 10 years:  The Fog wreck. 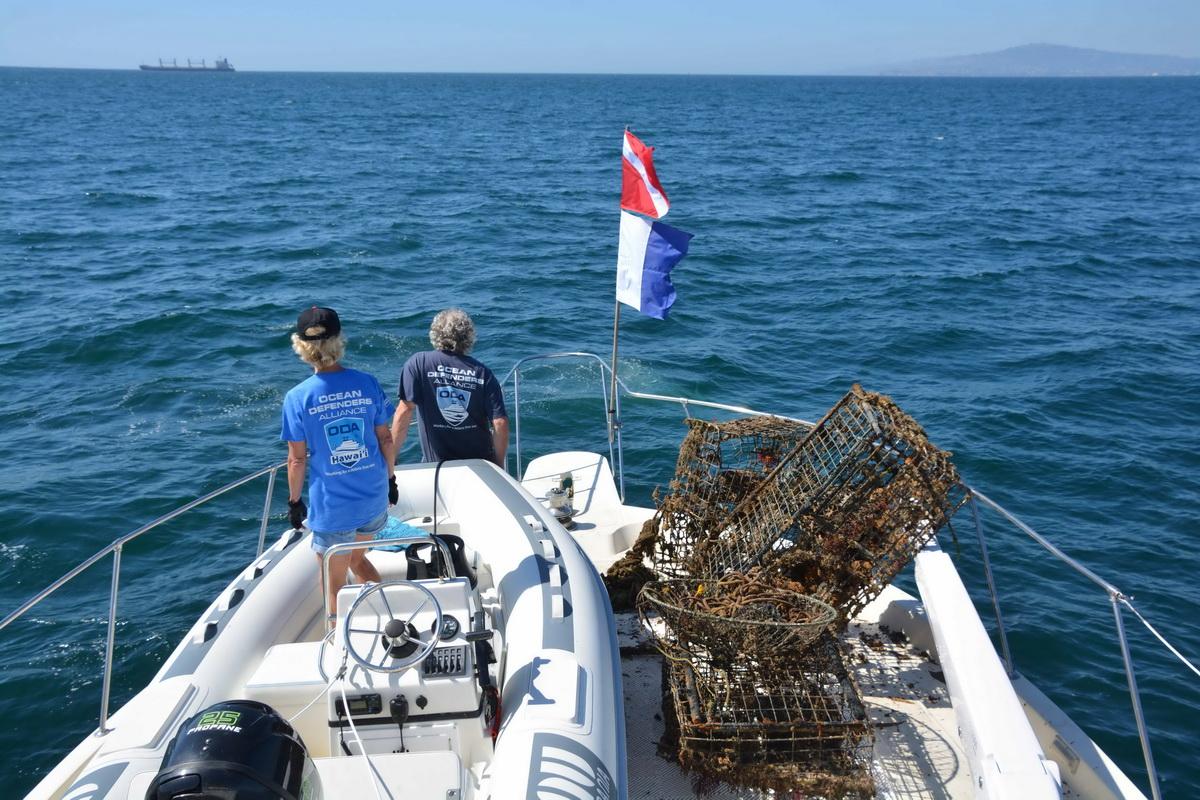 The last time we dived on it we had found a huge section of squid net on the sunken vessel.  It took us about three months to remove it all, and it was our first time getting such a sizeable amount of net up in one haul.

As we got near to the site, our GPS unit started acting up.  I will not bore you with the details of what it was doing, but it made it impossible for me to feel confident that we were actually over the site.  When I saw what looked to be a wreck on our depth finder, we dropped the anchor right there.

All five divers headed down to 97 feet where the wreck lies, swam around for 20 minutes but could NOT find the wreck…Dang.  All they saw was sand, even though the UW vis (underwater visibility) was pretty good at 20-30 feet.

We were disappointed that we didn't locate the wreck, but once we get our GPS repaired we will return!

Mission of the Day Accomplished

So, we struck out there, but we were thrilled that we still got so many traps out of the water.  A great day for our friends and the oceans. 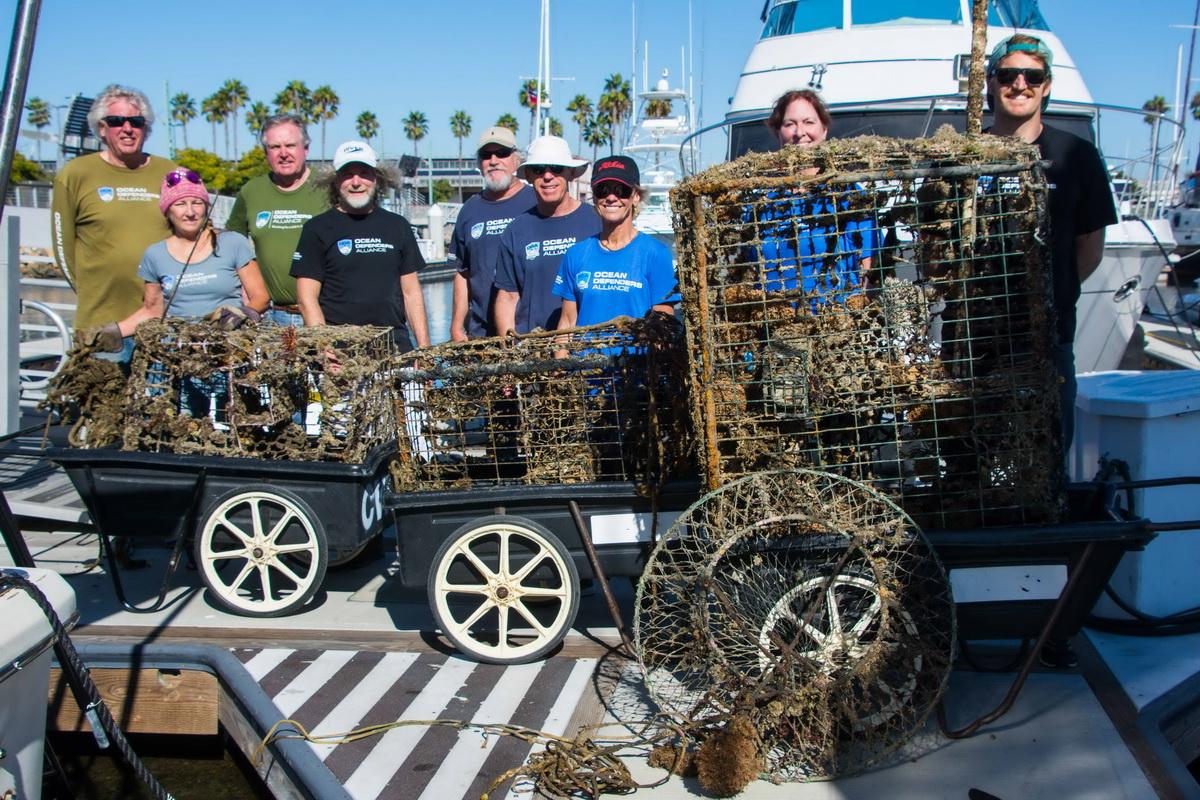 Thanks to all the people that helped out today: Al, Alvin, Geoff, Jeff, Kim, Kyle, Lisa, and Sue!  Special shout out to Mike Wynd, keep those debris reports coming in!!

If you have seen ocean debris in the form of abandoned fishing gear like lines, nets, or traps, or a concentration of plastics, please visit our Debris Report page and share the details with us.