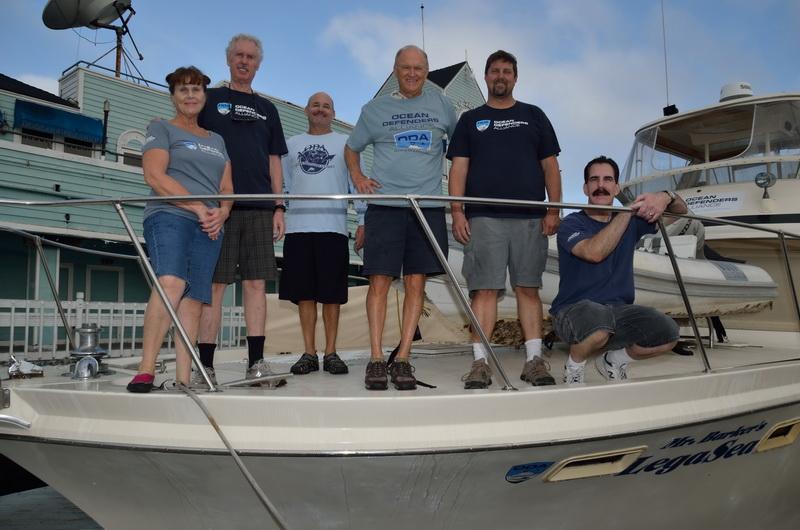 To see larger images, check out the photo gallery below.After having been out of commission for almost two months while our boat Mr. Barker's LegaSea had one of her engines rebuilt, we finally were able to head out on the seas again.

On Sunday, September 27th, we cruised over to Catalina Island to continue removing debris from Lovers Cove, which is designated as a Marine Protected Area (MPA).

It was an ideal crossing, absolutely no waves at all, and the bright rays of the sun turned the water to an azure that you see in the tropics.  The cool ocean air was a welcome relief from the oppressive heat that has been blanketing California for the last two months.

You may recall on our last outing here, we removed 1,600 pounds of stuff that was littering the sea floor in this MPA!  Last time out we removed the big pieces of debris from the sunken wreck called the Godspeed.  This time, we focused on the smaller items left from this capsized boat. 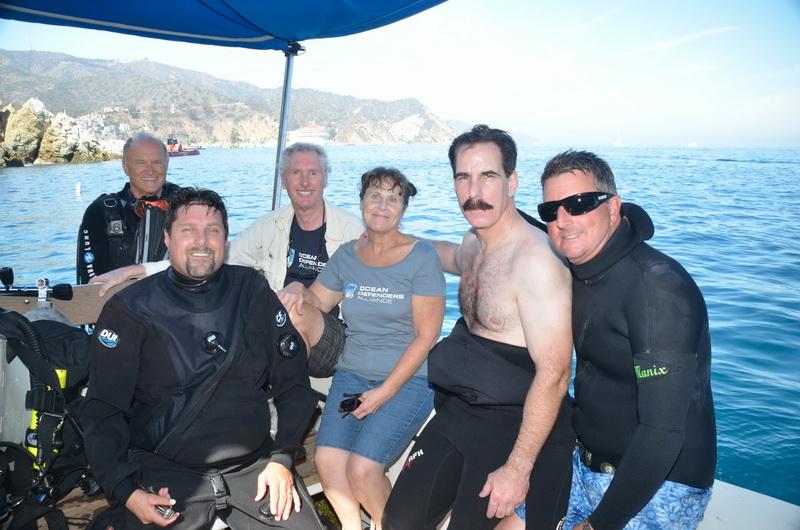 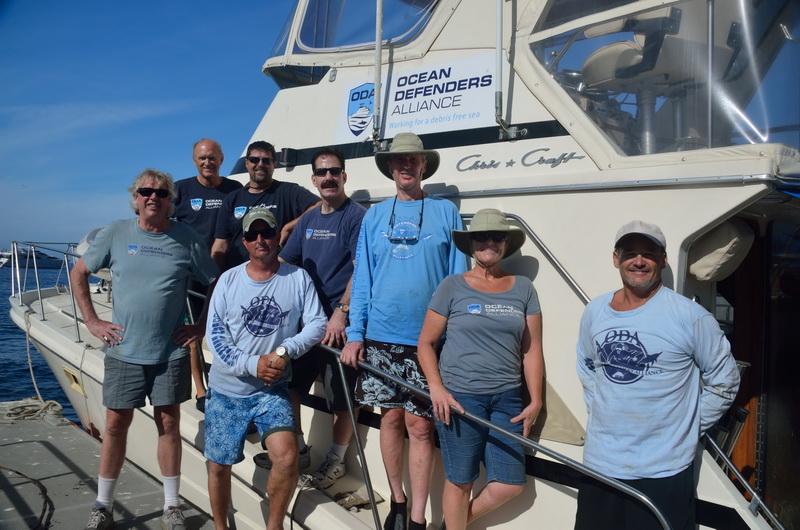 As usual, we had our excellent ODA Dive and Boat Crew. Our dive team was: Kevin Augarten, Jeff Larsen, Jason Manix, and Dave Merrill.  The deck crew was: Lisa Davis, Rex Levi, Jim Lieber, and I.

This wreck broke apart in shallow water; in fact a lot of the debris was in less than 10 feet of water.  The divers took "goodie" bags with them in order to collect the smaller items. As soon as they filled one up they would surface and Jim would slowly make his way towards them in the RIB (rigid-hull inflatable boat), where Rex loaded the debris onto the floor of the small craft.  After about a half-hour, we had to stop because the RIB was getting full.

So Jason, Jim, and Rex took the RIB and went back to the dock where they then hauled the trash up to a waste bin.  We are very thankful to Avalon Environmental Services for donating the use of the waste bin. 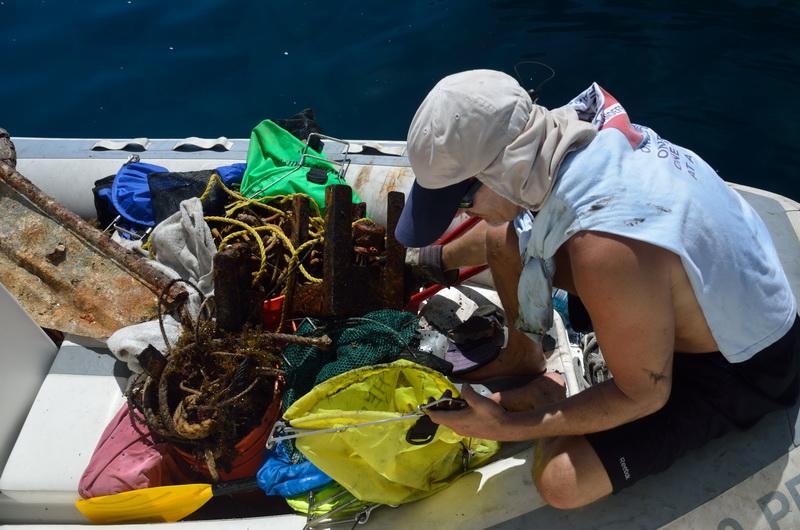 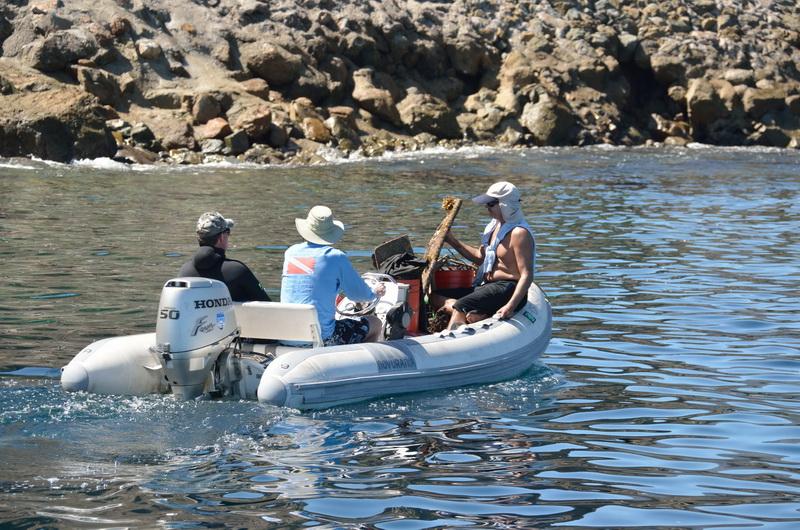 As soon as the guys got back to the LegaSea, we took a quick lunch, discussed what was left on the bottom for us to remove.  There was a large metal drawer, a large section of shag carpeting, and a VERY large rudder.

This time the guys used lift bags to get this heavier stuff to the surface.  Most of it was less than 100 pounds, so we were able to put it on the LegaSea's rear dive platform.

But the rudder was a different story.  It took five lift bags to bring it to the surface.  Because it was so heavy we decided to use our davit, and store it on the foredeck.

Putting Pollution in Its Place

After we got everything and everybody back onboard we headed the city of Avalon's pier about a half mile away.  Jason had contacted the folks at the Avalon City Hall, and they agreed to let us use the hoist on that pier. Boy, did that come in handy!

Some of the bigger items we removed were the rudder, a 20-foot section of a mast, rigging for the sails, a starter battery, a variety of cabling, and a small welding table.

It was quite the adventure getting this debris off the LegaSea.  Jason operated the hoist, while I positioned the boat as close as I could to the hoist's hook.  When we got into position, Dave and Rex attached the hook to our load and Jason hauled it up.  Somehow it sounds easier when I'm writing about it than it actually was, but hey, we got the job done, and no one got hurt.

After all that was said and done, we bid Jason farewell at the docks and headed back home to San Pedro.  We had a pleasant crossing, again with little or no wave action.  The boat ran great, and we all had a good time.  When I called the disposal company the next day, Steve Batty (the generous owner) said that it all weighed 1,190 pounds.  Can we call it 1,200?  That is over half a ton!!

While we all can feel good about what ODA has been able to accomplish, there is a sad series of events going on with our local waters this summer.  On this trip to Catalina we hardly saw any wildlife during our crossings. The water temp was 72 degrees; much warmer than is typical for this time of year, normally it would be about 62.  Jeff Connor was on a dive this week in Redondo Beach, and reported 75 degrees at 50 feet deep!  Unheard of in my lifetime.

This warm body of water is wreaking havoc on our wildlife, and this is going on all the way up to Alaska.  Scientists have started calling this phenomenon the "the blob," because it is just staying in one place and not moving.  This warm water is driving the animals that typically call this area home to go further out to colder waters in search of food. 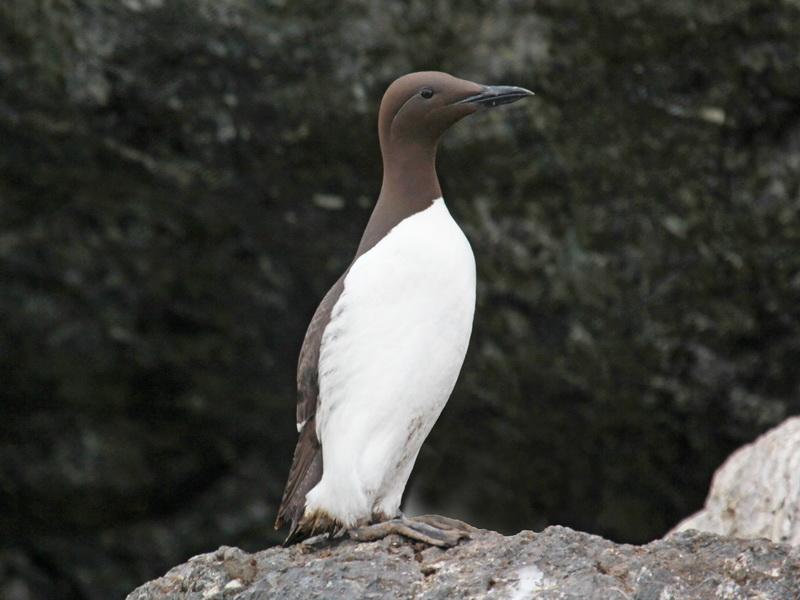 common murreOne of the side effects is that we are hearing about sightings of animals that would normally only be found in the tropics.  Blue footed boobies, hammerhead sharks, whale sharks, yellowtail, Bluefin tuna....while it is exciting to have the opportunity to see them in our local waters; it is a sign that our ecosystem is out of whack.

California sea lion pups are dying in the thousands because their mothers have to go far distances from shore to catch their normal prey, and can't get back to their pups in time to feed them.  I am not seeing the sardines and mackerel like I use to.  Also, not spying many seabirds, and have been reading reports about tens of thousands of common murres dying of starvation.  Murres are a small bird, about the size of a football.  They can dive up to 250 feet deep in search of small fish.

Our oceans are changing rapidly due to human related activities like pollution and overfishing.

What You Can Do About It

Thanks to our great volunteers and supporters, ODA is on and under the water, doing all we can to keep our native marine wildlife around for future generations to experience and enjoy.

Won't you be part of this effort to remove pollution and defend ocean life? We'd love to have you onboard with us. :)