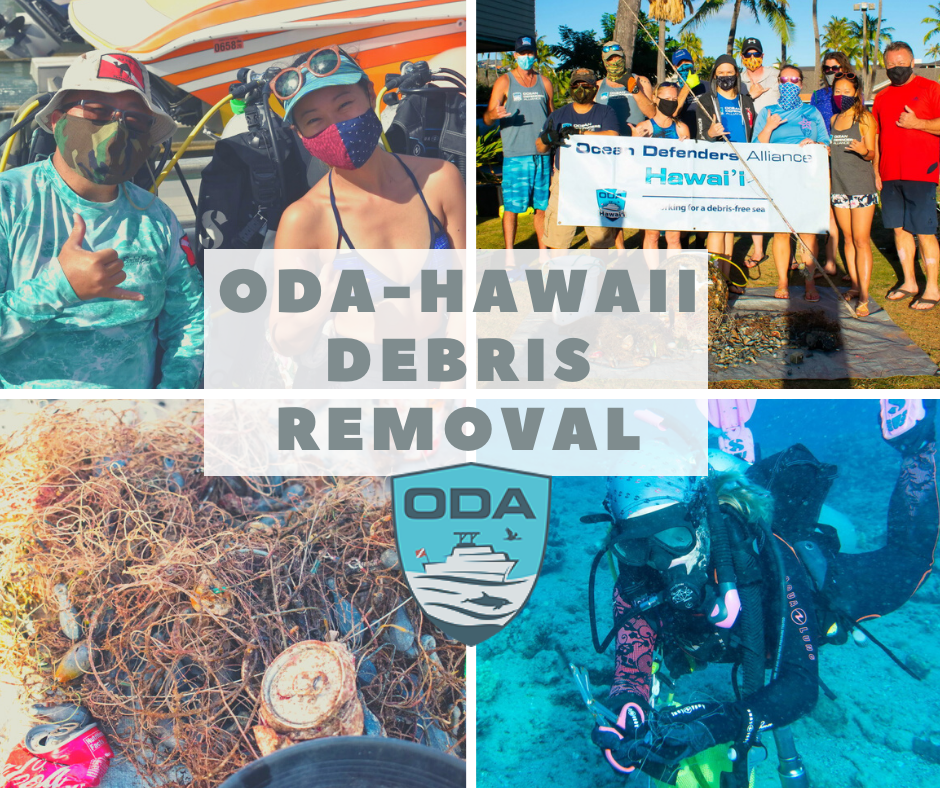 It’s been a little over a month since the last cleanup dive we did on Oahu, so you would think there wouldn’t be much more to remove.  You would think!

Ten ODA volunteer divers grabbed their gear and boarded our partner Island Divers Hawaii’s boat on Sunday, January 10th.  They headed out late in the afternoon, not sure if they would be able to get in the water safely as the weather service was predicting winds and big waves.

But once they got outside the harbor and got closer to the site, the started thinking “maybe we can get it.”  The team decided to put one diver in the water to check conditions before everyone got geared up.  So, Kevin Wong did the honors, and after a few minutes was able to determine that it was safe.  Yahoo!

Fifteen minutes later, the captain dropped off all divers close to the sheer walls of Spitting Caves. 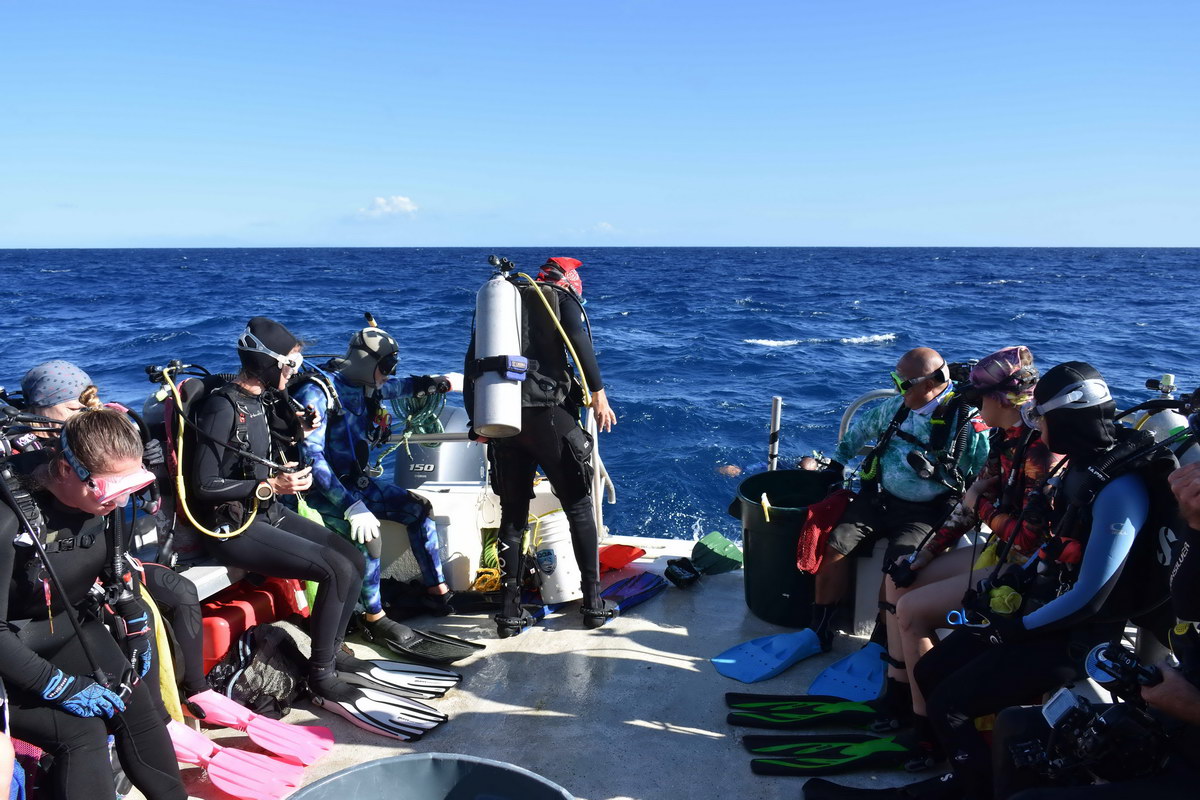 We’ve cleaned this area so many times, the divers know just about every nook and cranny. Unfortunately, debris continues to accrue at this site…

Once again ODA-Hawai’i Oahu volunteer coordinators Ken Staples and Glenn Roberts rounded up the experienced ODA divers and next thing you know all the divers were set to go.  Dive team this day was: Henry Bennett, Pam Holder, Arlice Marionneaux, Dan Okamura, Glenn, Ed Sisino, Ken, Zach Trevathan, Katie Weback, Rose Zhang, and Kevin.  Be sure to read to the end to hear about Rose's unique find on this dive outing!

They organized into two separate teams, with five in each.  Each team had one person act as the safety diver to ensure that if something went wrong, they’d be able to help immediately. 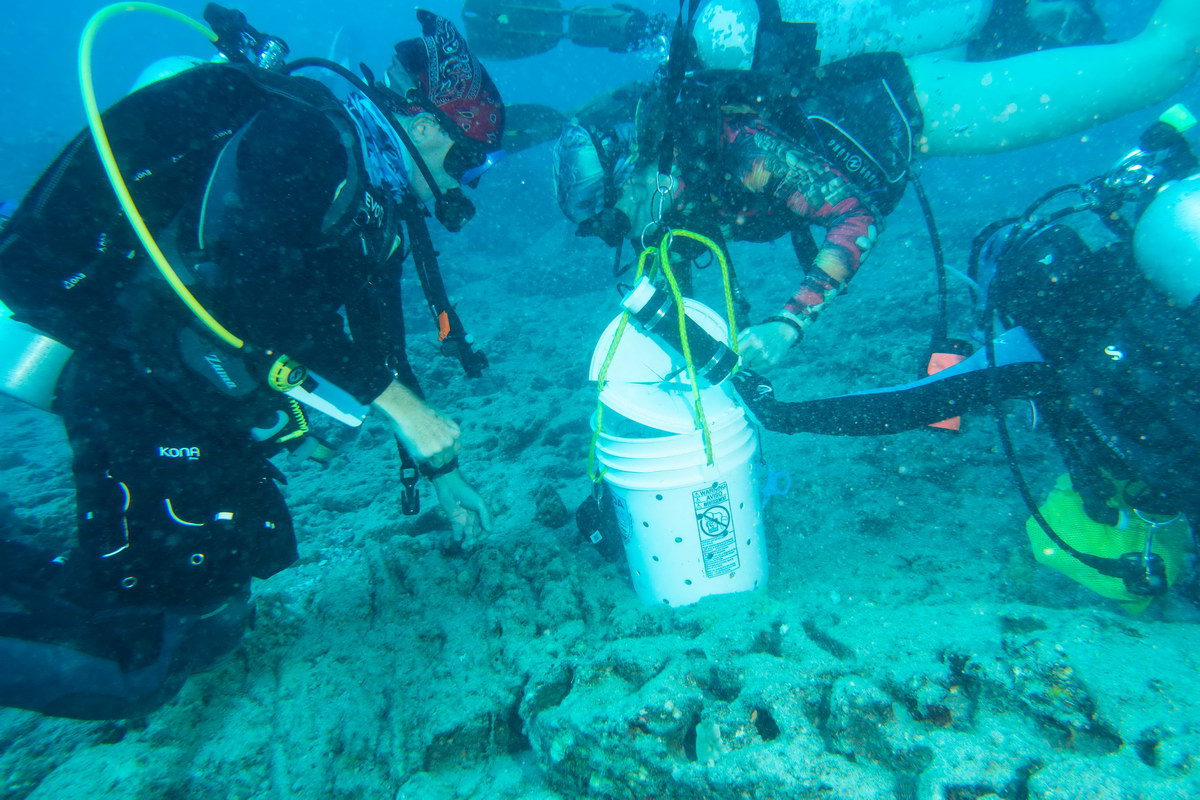 Ken was one of those safety divers and took all these great underwater shots to boot! Be sure to look at the entire photo gallery below. :-)

The teams were mostly working at 50 feet deep and found a huge amount of lines and lead weights.  Hard to believe they were just there on December 13th! 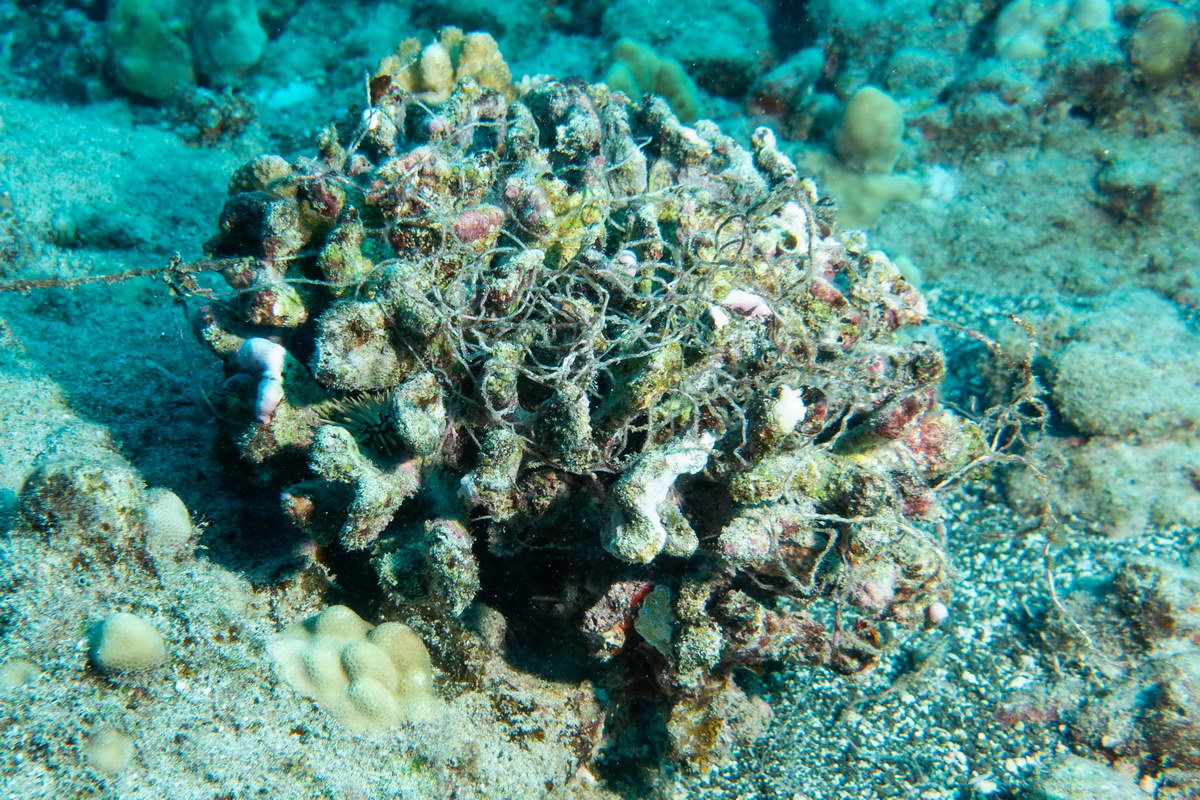 They emptied all the debris in two five-gallon buckets, and at the end of the dive, hooked up our lift bag and towed each to the surface. 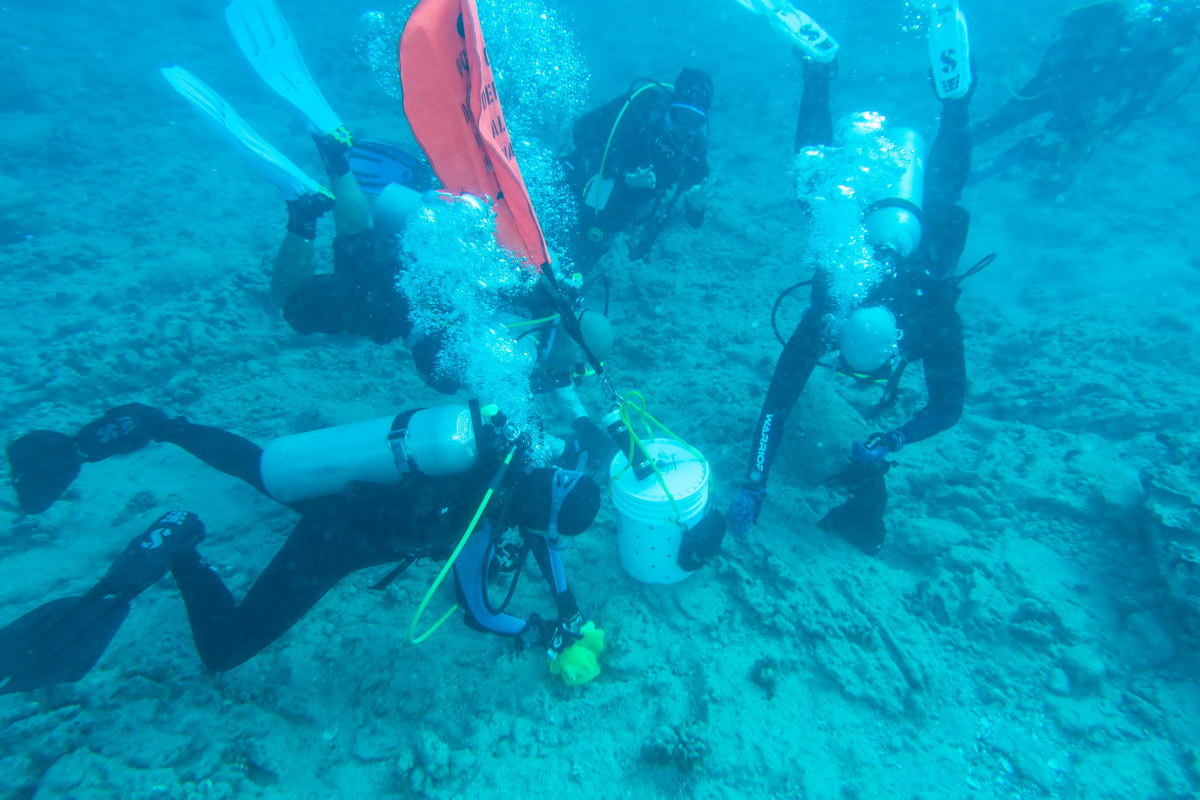 The underwater visibility wasn’t great at around 50 feet, but no one complained as they were singularly focused on removing as much of the lead as they could during a one-hour dive. 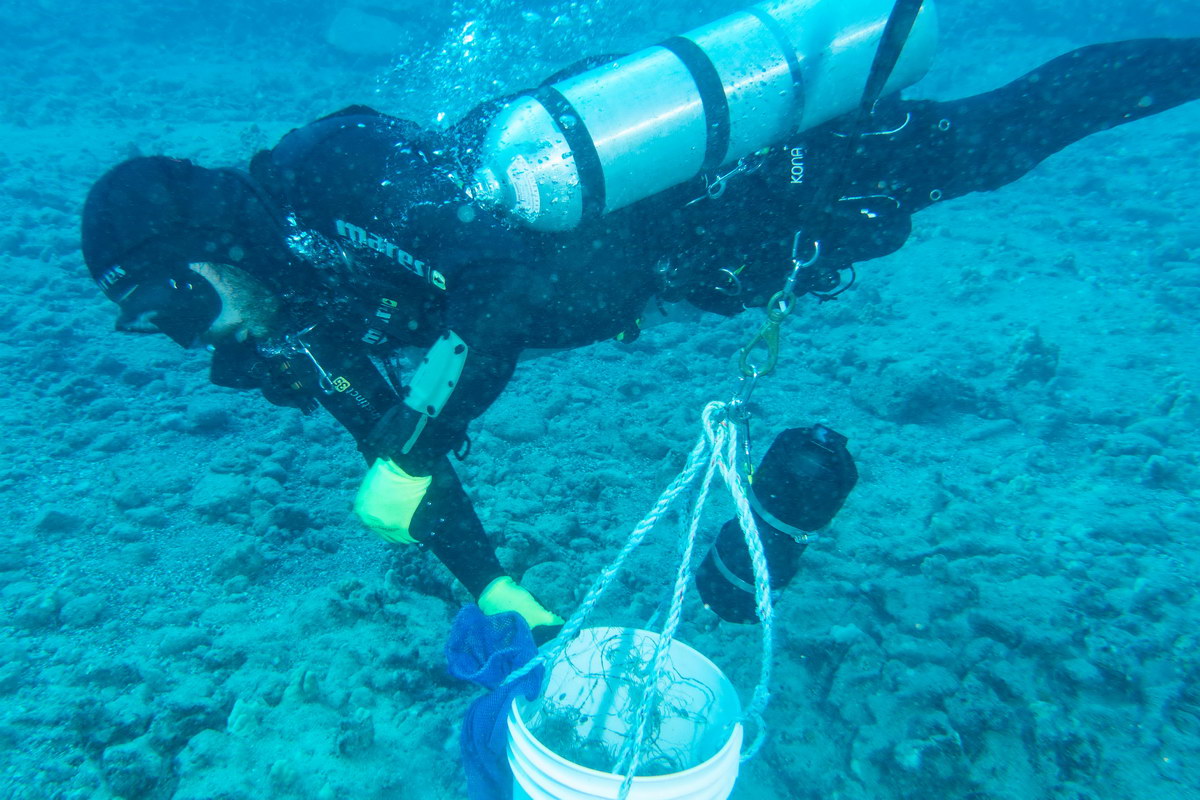 The entire time down there they only worked on an area of about 80 feet by 80 feet.  It’s just shocking to me that one small area could be so polluted with lead.  But it was, and we will be back for more next month! 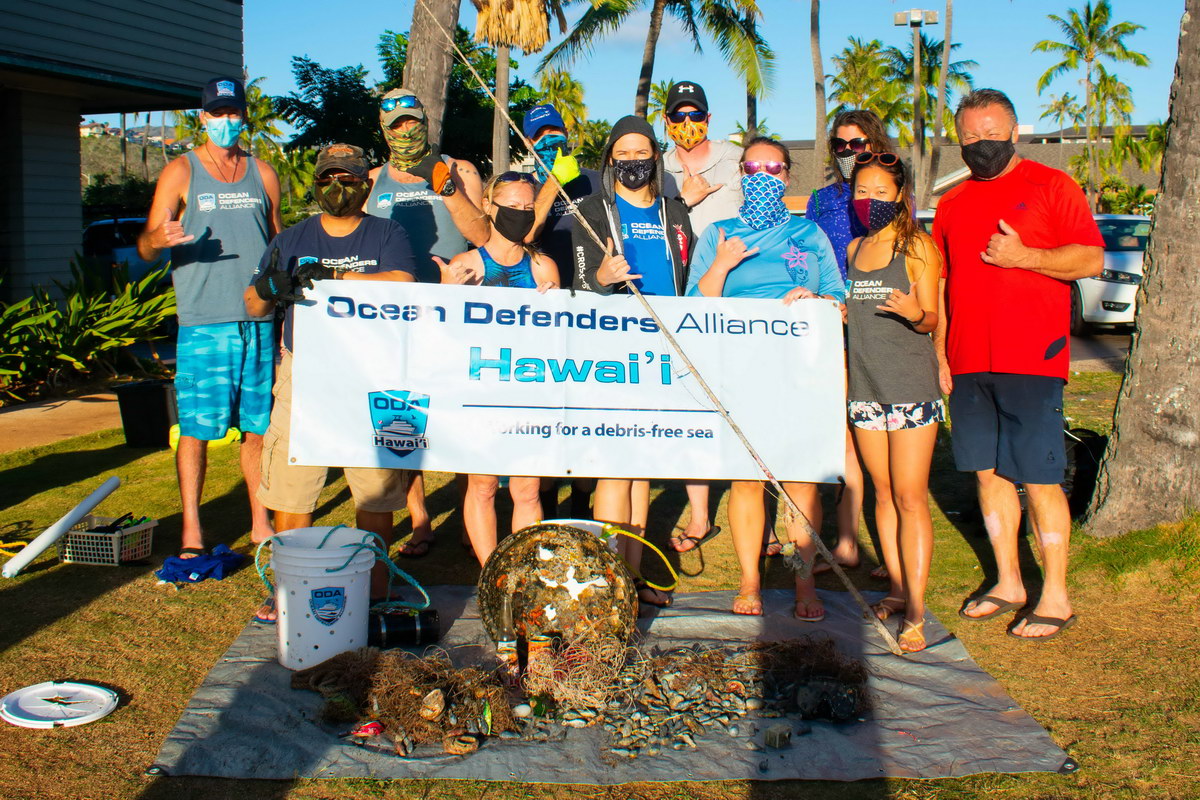 In all we removed roughly 3,000 feet of line, 136 pounds of lead, and 45 pounds of miscellaneous debris.

Thanks to the entire team: Matt, Marc, and Bailey who handled the boat and decks, and diver-cleaners Henry, Pam, Dan, Ed, Glenn, Ken, Zach, Katie, and Kevin.  You all made the waters of Hawai’i safer for our friends in the oceans and all ocean lovers thank you!

INTERESTING ITEM FOUND: Rose found a really unusual treasure while on the lookout for man-made things to remove -- someone's GoPro camera!  It looked to be in good shape so she thought somebody lost it recently.  But when she got home and opened it up she found a memory card that looked brand new.  She popped it into her computer and found some video that still worked and was dated from July 24, 2014!  Wholly mackerel, almost 8 years old and still functioning.  The video showed a teenager motoring a small boat right near the cliffs of Spitting Caves, then the camera dropped into the water and was twirling in circles as it found its resting place on the bottom.  Rose would like to get it back to its owner, so if anybody knows who lost a nice GoPro in July of 2014, look up Rose Zhang on Facebook.

If you’re someone who loves the ocean, we would sure appreciate you joining our efforts. You can be part of defending the oceans by making a donation to help keep our boats and divers at sea. Thank you!