It somehow did not seem right that while one of Hawaii’s most celebrated surfing  competitions was going on, we were jumping in the ocean to SCUBA dive! 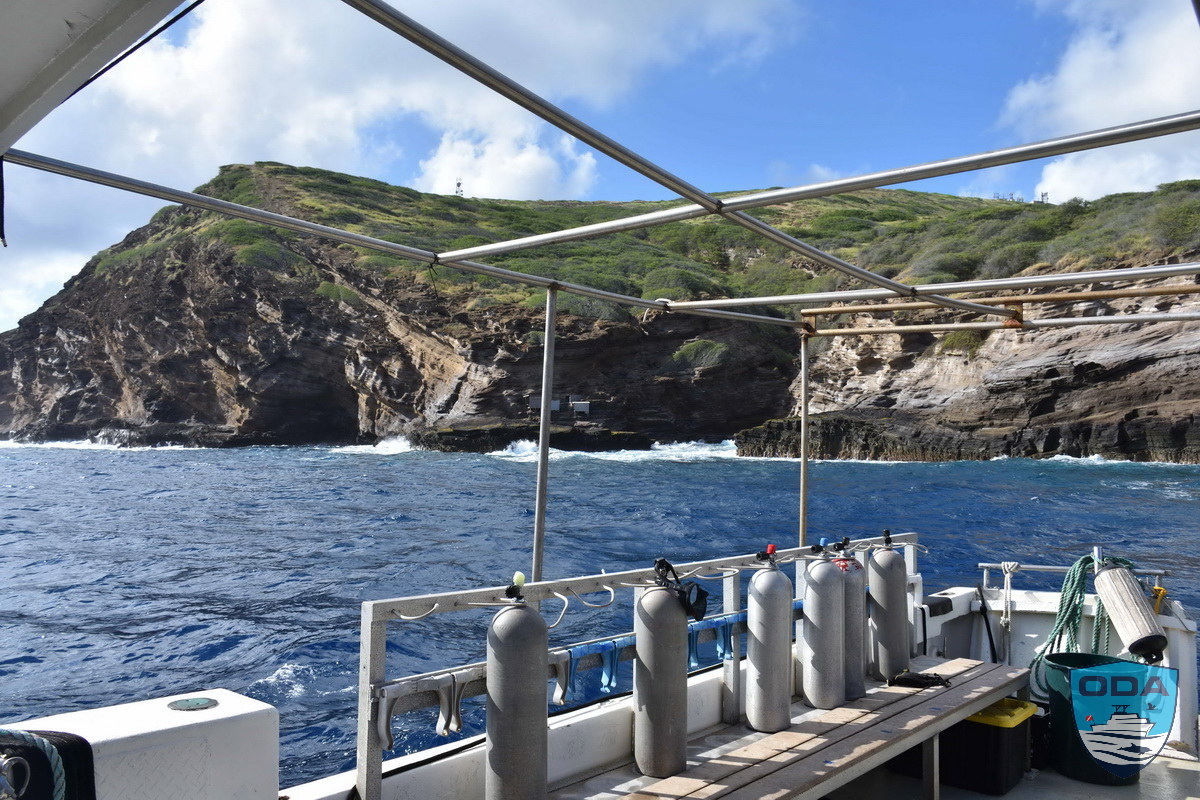 The Eddie Aikau Big Wave Invitational was on the North Shore and we were diving on the south side of the island, on this Sunday the 22nd of January.  Still, with 50-foot waves happening north, there was bound to be some swell wrapping around.  That said, we made it safely to Fish Camp with Matt Negaard’s expert captaining skills and were able to get underwater.  The visibility was not the best but good enough for us to put a dent in what needed to be done. 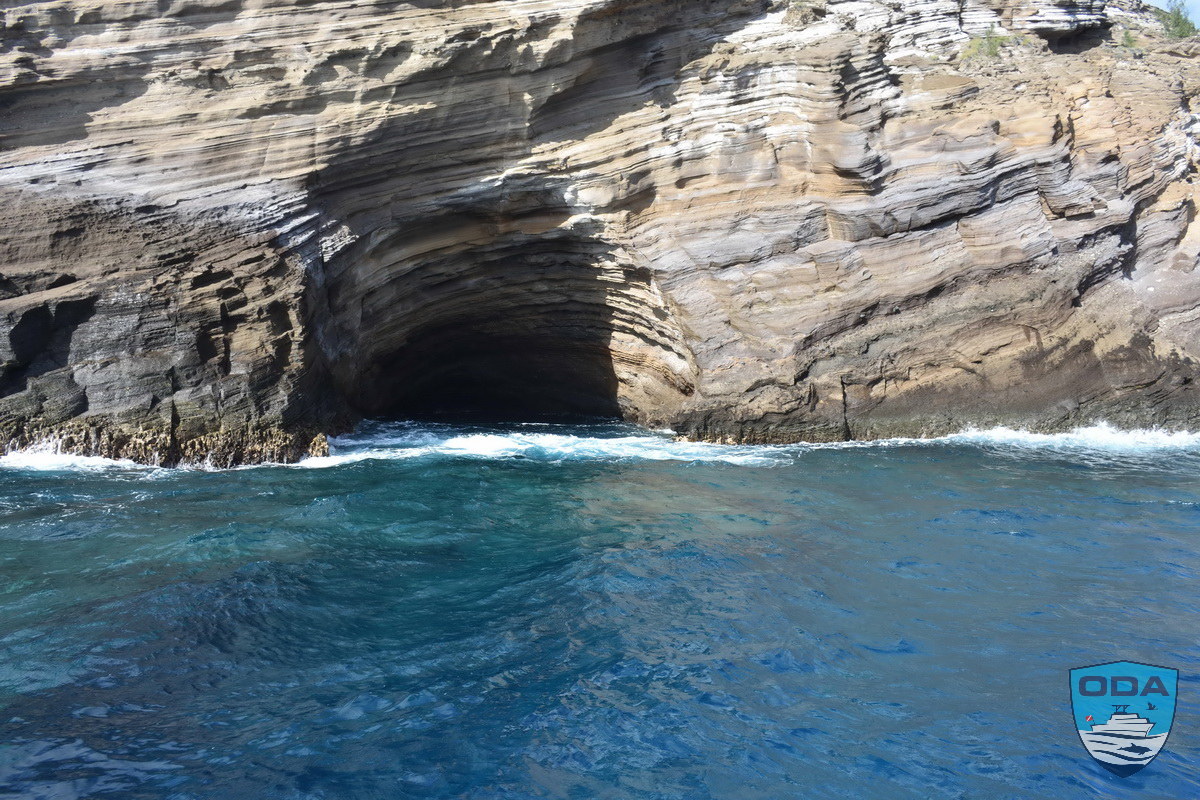 A regular cleaning at Fish Camp is always on our agenda as there’s so much to clean up there on an ongoing basis due to the recreational fishing there.  Fishermen perch on the cliffs above the water dropping their lines a long way down, and often their lines get stuck on coral or rocks, and in trying to pull them up, the gear (fishing line, weights, and hooks) disengages from the pole and falls in the water.  Sometimes the poles go down, too! As you read on, you’ll see that we find a wide variety of other things, too. 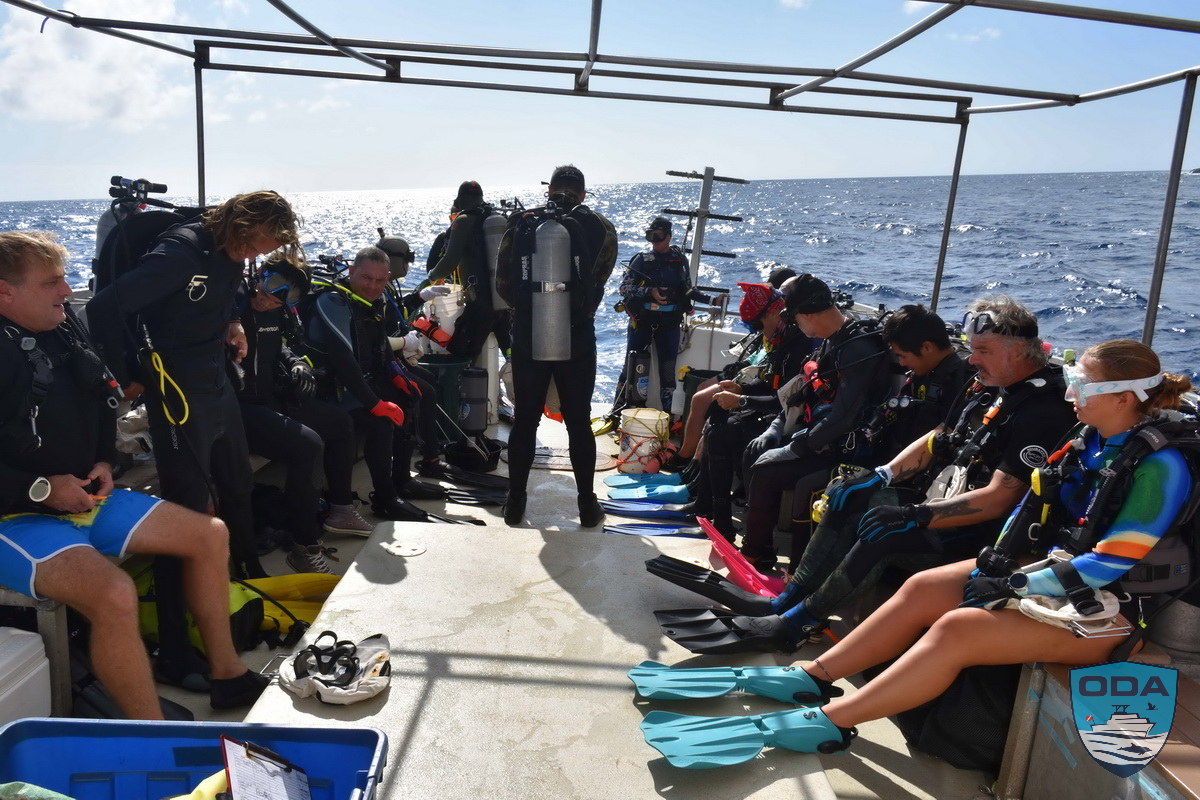 My job was to take pictures but honestly, I feel like I failed miserably! It is just so, so hard to not stop along the way to extricate fishing line when there is just so much crisscrossing the sand and rocks! At times, I let my focus go and I succumbed to the “pull” to pull the debris. 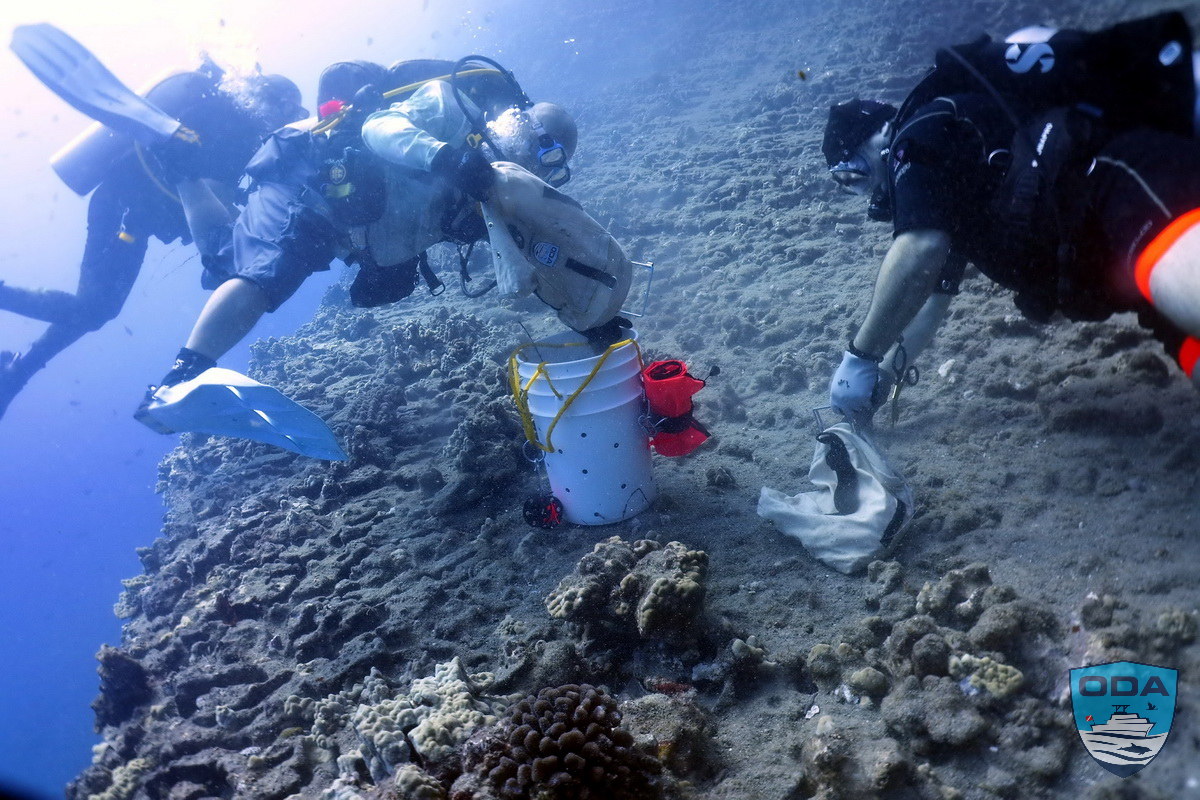 We were all busy! There were ropes to gather, cans, roughly 900 yards of fishing line was pulled, lots and lots of wire, many chandelier hooks and the fishing weights were large and came in at 175 lbs.

The big success of the day was Ed Sisino’s determination to finally get that ladder that we always see as we are finishing our dive and heading out to sea for the boat to pick us up.  Unfortunately, by that time we cannot drop to the 90 feet where it lay! But on this day, Ed and newcomer Josh dropped a bucket at the ledge and then headed out to claim the prize!  (Captain Matt informed them later that there was another ladder!). 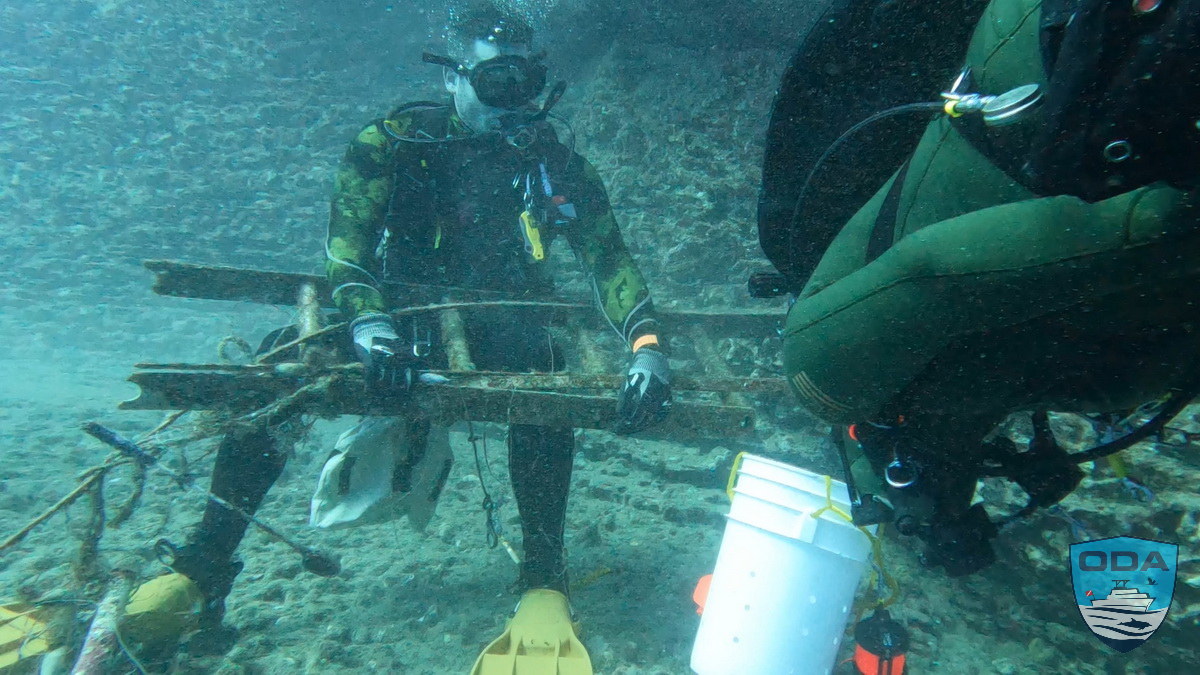 For more photos of the ladder removal (and many others), be sure to check out the photo gallery below!

Much too soon our dive was over.  This is always the part that makes me a little unsettled as we have to gather everyone to head out to sea, but Dive Instructor Anna Sorrentino makes sure we are all present and accounted for. 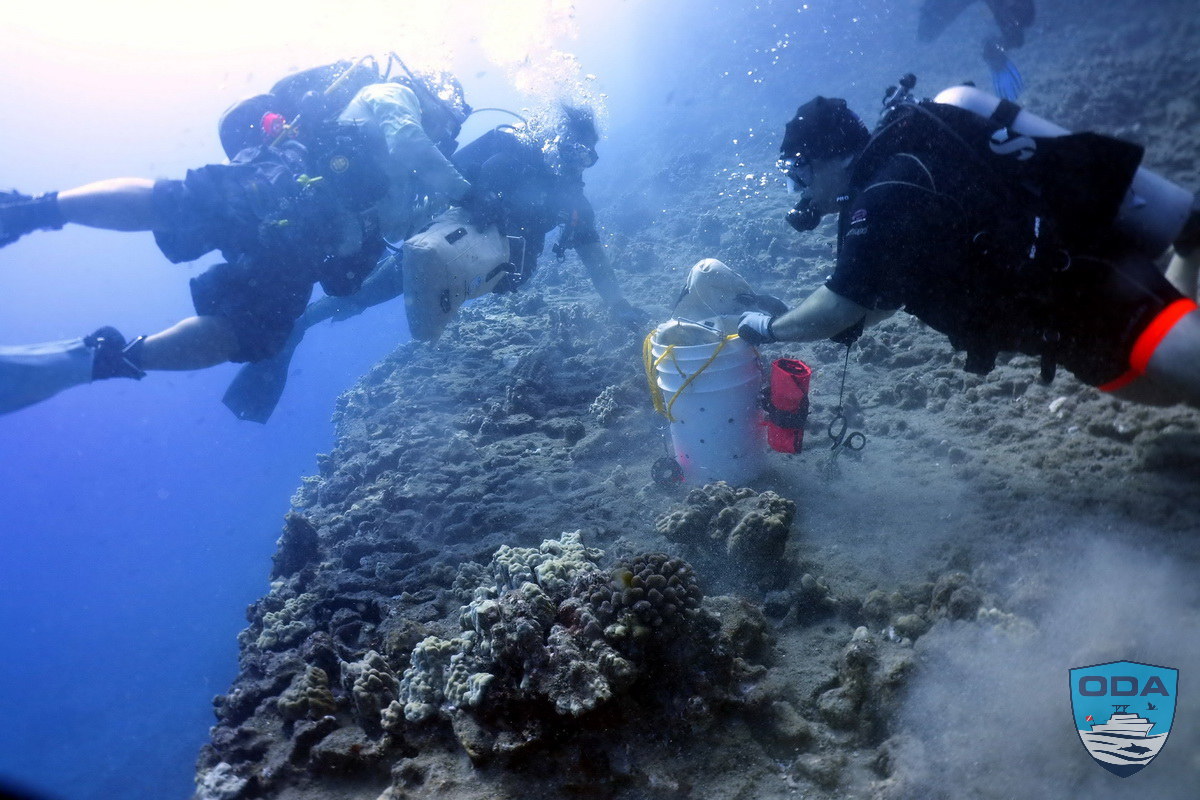 Each of the buckets are lifted by their handlers as the rest of us avoid them for safety.  After a three-minute safety stop, we all pop to the surface to await the our rendezvous with the partner Island Divers Hawaii’s vessel Sea Fox.

With 16 of us in the water and four pick-ups (we had three buckets), this took a while.  Waiting at the surface is at times not the most pleasant as you are bobbing with the swell or fighting waves.  But again, we’re so thankful for Captain Matt’s skills and everyone working together to get the entire dive team onboard as quickly as possible.

We’re grateful for boat crew Temple Liebmann’s skills as she helped to get everyone on the boat and also took all the above water photos! 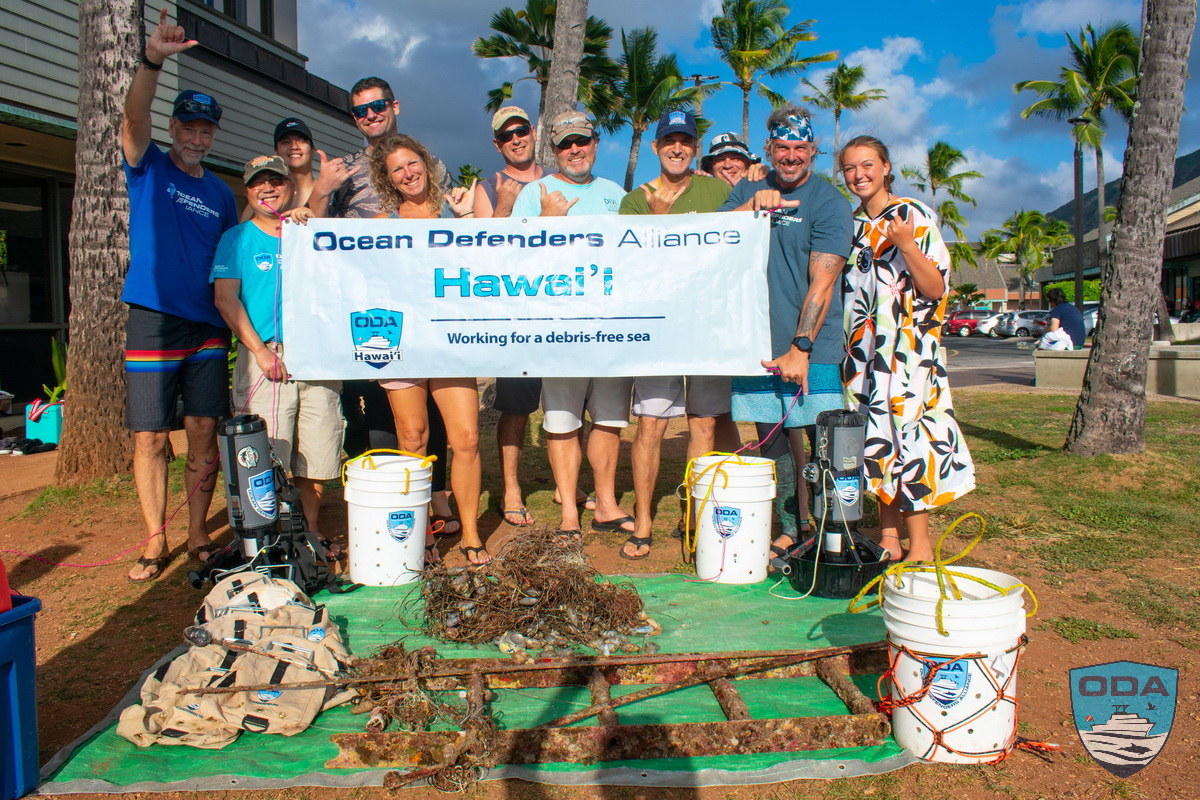 Take a moment to watch a short video or read the story about how ODA came to be! We believe ODA is needed on every coastline where fishing occurs, so we are working slowly and steadily to expand our reach.