Different Ways to Defend the Ocean

It’s been a few weeks since I last let you know what we’ve been up to.

We did our last underwater ocean debris cleanup in California on June 6th.  First let me give you the bad news and then I'm going to give you a bunch of good news...so please stick with me! On returning home from that trip we had two mechanical breakdowns with the boat. 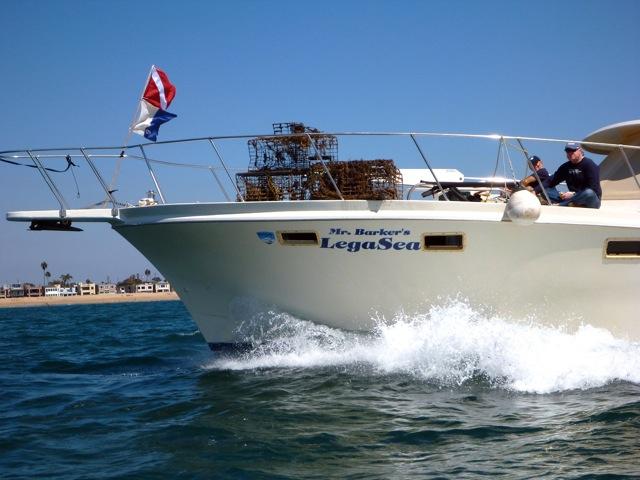 This is the way we like to see her: Carrying hauled-out marine debris back to shore for proper disposal!

The first was that the generator wouldn’t turn off.  We had to cut off the power source to get it to stop.  Turns out the electrical control module failed. Thankfully, we had a new one installed this week.  We’ll be taking the boat out this weekend to see if all the repairs hold up.

The second thing that went wrong was this: We suddenly found some diesel fuel in the bilge. The bilge is the lowest compartment on a ship, below the waterline, where the two sides meet at the very bottom. Back at the dock, we had the fuel removed from the bilge, and then had the area steam-cleaned so we could try to trace for a leak, but we didn’t find anything.  My brother Jim (ODA crewmember and board member) and I then took the boat to a fuel dock, had all the fuel removed from the tanks. Once they were empty, we did a pressure test to see if there was an air leak.  Nope.  Both tanks are fine.  So, now we are trying to see if any of the hoses are leaking.

So, you can see why the LegaSea is not working for the moment…but we have been active in other ways. Here comes five different "good news" reports!

On June 4th, I had the opportunity to give a talk to about 20 students at the Vista View Middle School. 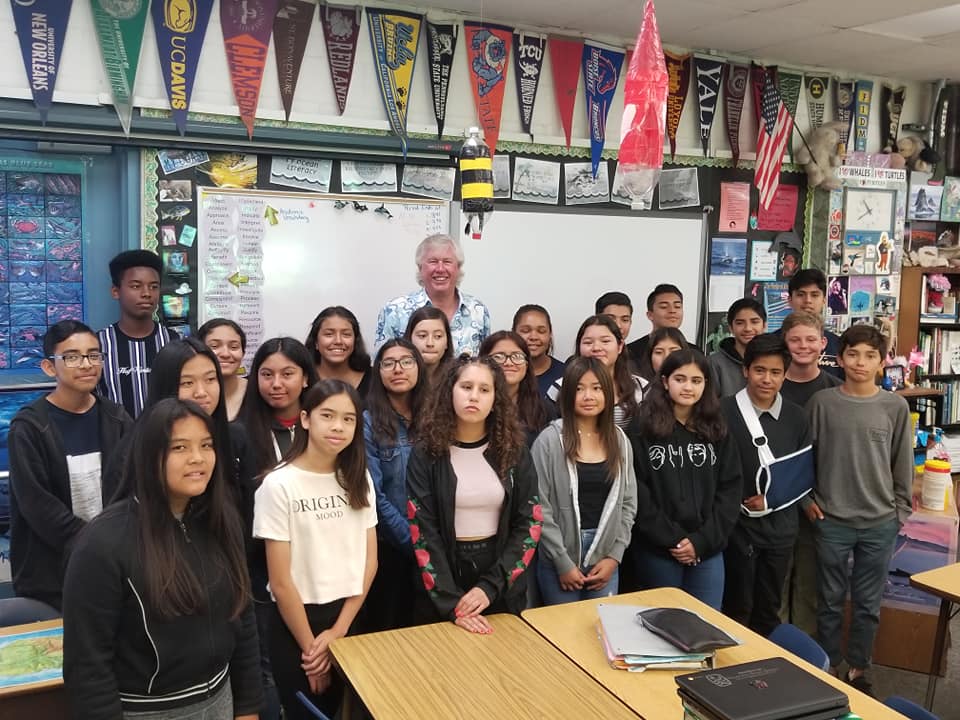 One of our volunteers, Daryth Morrissey, is a marine biology teacher there and invited me back to let her current students know all about ODA.  Ms. Morrissey is a very inspiring teacher and it shows on her students’ faces. 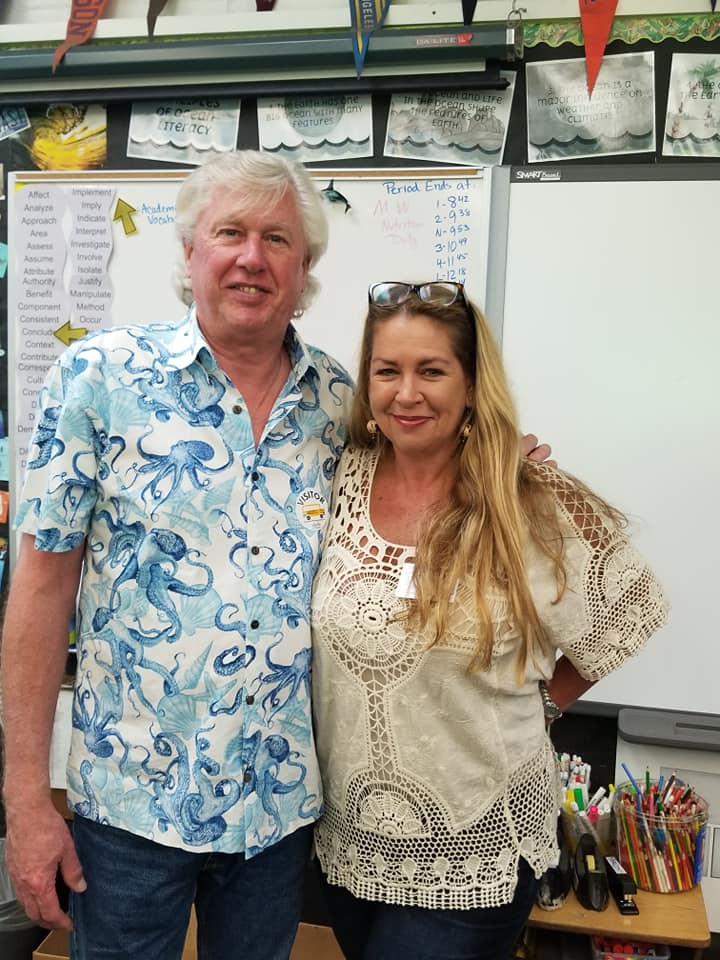 On June 5th, I was on a panel discussion about ghost gear, at the Aquarium of the Pacific, in Long Beach, California.  The event was called “Meet the Team Solving the Ghost Gear Problem to Protect Marine Life.”

There were three others on the panel with me: Richard Ogg, a commercial crab fisherman in Bodega Bay, CA;   Kirsten Gilardi, a scientist with Wildlife Health Center at UC Davis and Ex-officio Board Member with SeaDoc Society; and the fourth person to fill out the panel was David Stover, CEO and Co-Founder of Bureo Inc. a company that takes old nets, cuts them up, heats the material and then turns that into a resin that can be used to make skateboards. 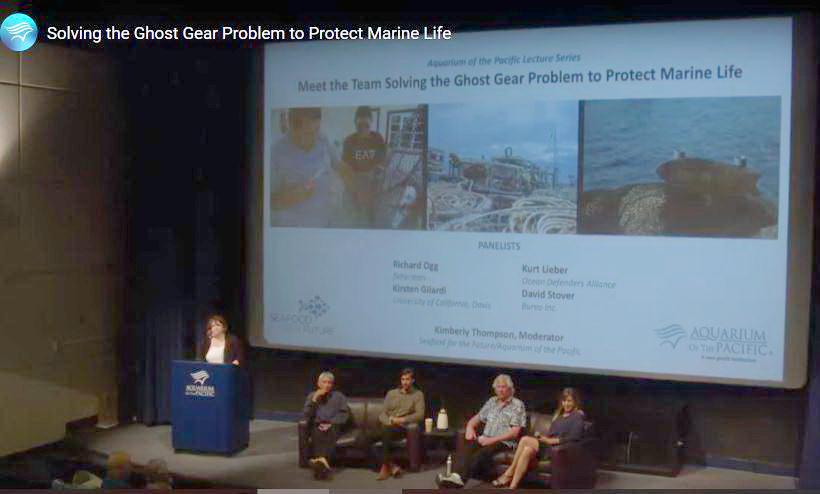 My gratitude goes out to Kim Thompson (Director of Seafood for the Future), Linda Brown (Lecture Coordinator), and the staff at the Aquarium for making this happen.  ODA diver and boat captain Dave Merrill regulary volunteers at the Aquarium and suggested to Kim and Linda that ODA participate in the discussion.  Tanks, Dave!

You can watch the full panel discussion here: http://www.aquariumofpacific.org/events/archive/ghost_gear

Shawn Broes organized the event and sent me a note later that said it was very well received by his club.  Several people signed up to get our periodic updates via email.  Welcome aboard you Sole Searchers!

That same day, I met with four students from Santiago Charter Middle School, their teacher Holly Mikkelsen, and the principal of the school.  They traveled from the City of Orange to see the ODA flagship LegaSea. 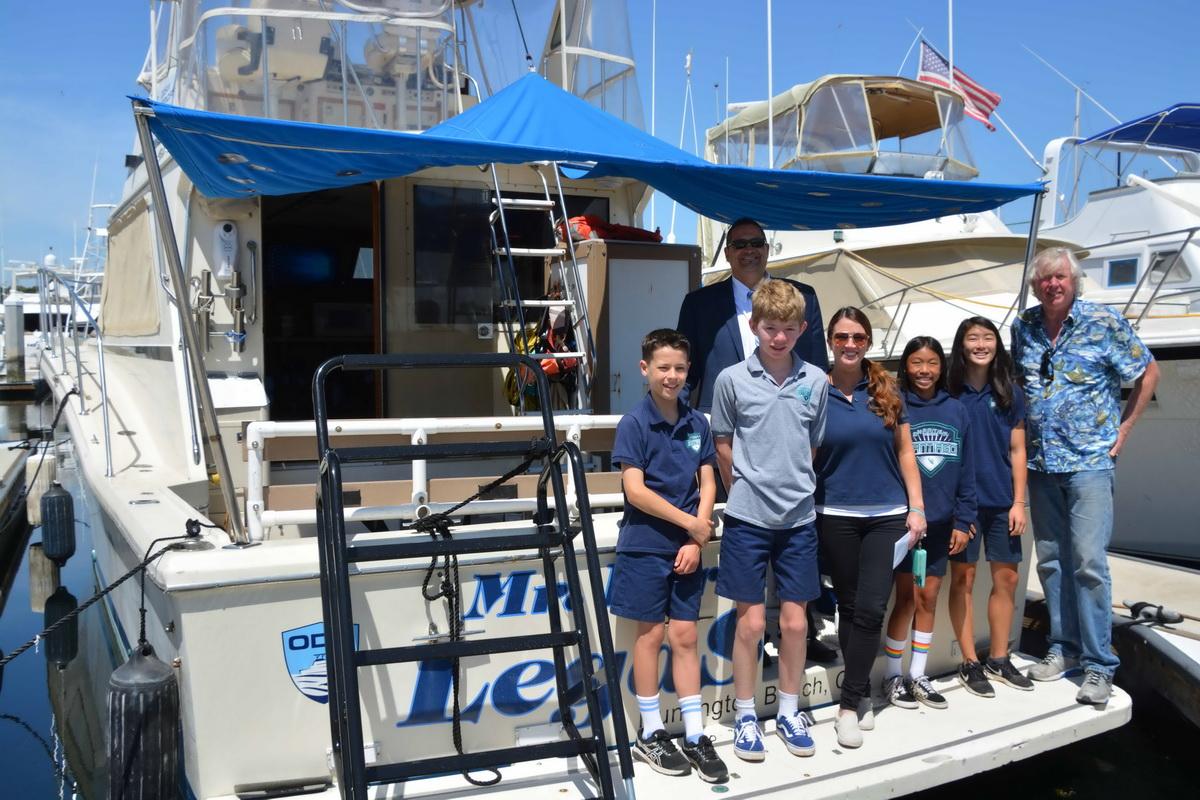 I had the opportunity to show them how the boat operates and played a short video that talks about the damage that monofilament lines can cause to marine wildlife.  At the end they handed me a check – a donation to ODA!  This is the second time students from this school have donated some of their hard-earned money to us for clean oceans.  Knowing how serious 14-year-olds must be to let loose of their money means the world to all ODA volunteers.  Thanks for being such caring and generous people!

A Harbor that Cares

To top it all off, on Wednesday June 19th, I had a short meeting with Mark Sandoval and Gary Hirtensteiner who work for the Channel Islands Harbor in Ventura County California.  Mark is the Harbor Director and Gary is the Harbor Master.  The topic of conversation was focused on seeing if they would let us start doing underwater cleanups in the CI Harbor again.

As you may recall, we removed roughly 10,000 pounds of marine debris from the harbor several years ago. 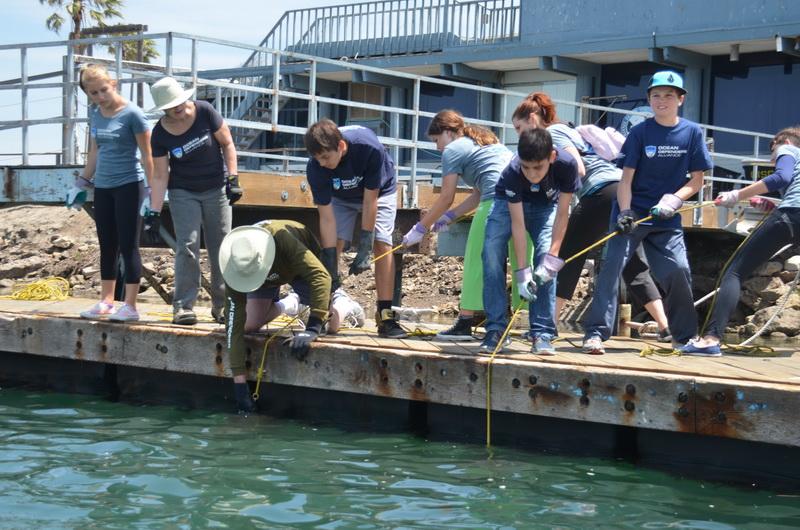 We stopped doing it when we moved the LegaSea back down to San Pedro.  We’re planning to move the boat up to the CI Harbor in August and thought it would be a good time to do these cleanups again.

It took them all of five minutes to agree.  Fantastic!!  Stay tuned all our Ventura County friends, we’re going to need your help in a few weeks.

ODA believes that for change to occur, people must be made aware of the issues, problems, and challenges that currently threaten the oceans’ health and survival. So, even though we haven’t been active on the water for the last few weeks, a lot of important educational work has been going on behind the scenes.

Thanks for your patience and understanding that we are doing all we can to keep moving forward, despite the temporary setbacks with our California-based boat.

Our ODA-Hawai’i crew will be out on Oahu waters tomorrow, and you can bet that the minute we have the LegaSea’s leak situation under control we’ll be out plying the seas, removing hazardous abandoned fishing gear, plastic, and all kinds of debris!