With springtime fast approaching, we at ODA are gearing up for a busy time of year.  On March 8th, we conducted two separate ocean defense activities on the same day.  We had a boat load of divers go out to remove net, and we also had an information booth at the Whale Festival, in Dana Point.

It was an absolutely beautiful day in California, with partly sunny skies and temperatures in the mid 70's; ideal for being outside, without getting fried by the sun. [Note: be sure to check out the photo gallery at the end of the article!] 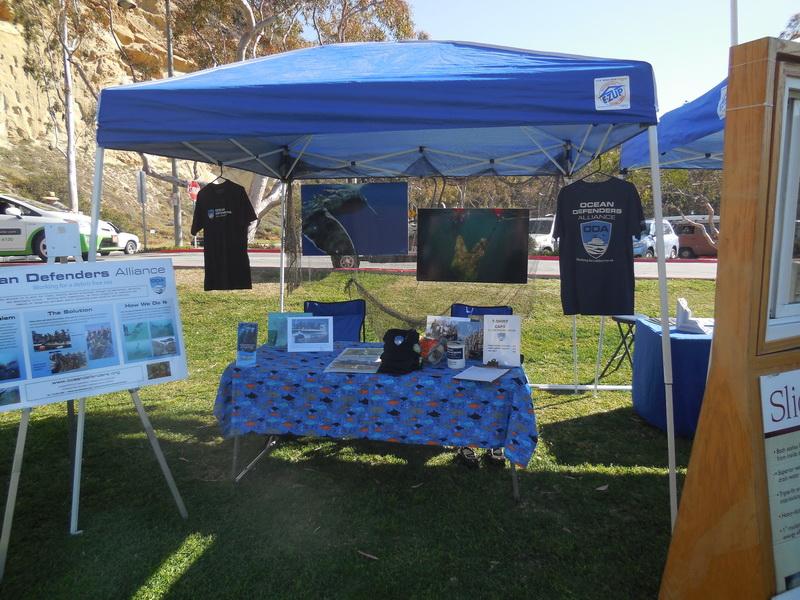 ODA Advisory Board Member Cheryl McCarthy took the reins and organized the information booth at the Whale Fest, and recruited her husband Marc to help out. This festival has been held for over 10 years and seems to grow in attendance every year.  Cheryl and Marc were busy all day.  Hundreds of people stopped by the booth, many of them signing up for our e-news and buying some of our cool t-shirts (organic cotton, of course!).  Thank you everyone who stopped by and learned more about what ODA does to make our local waters and global oceans healthier and safer for all living beings.

You may recall that we scouted a site near Huntington Beach two weeks ago in preparation for removal of deadly abandoned netting on and around it.  After that day, we showed the excellent video (thank you Peter Fulks!) from our scouting dive to our debris recovery dive team and were ready for the next task: removing it! 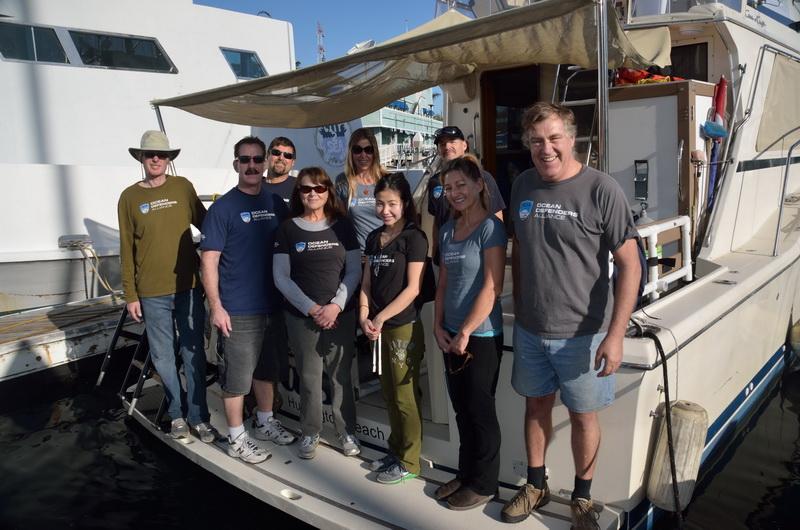 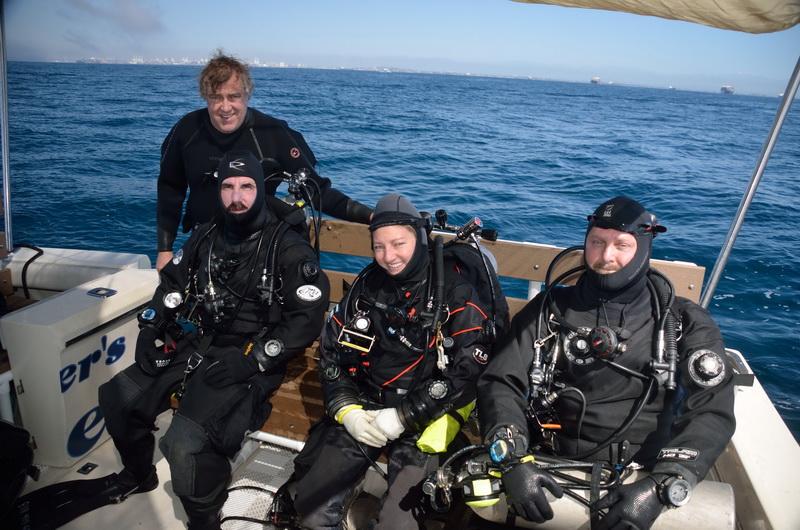 The dive team this day consisted of: Kevin Augarten, Kim Cardenas, Jeff Larson and Walter Marti (underwater video).   Also on deck we had Lisa Davis, Pamela Henricksen, Suzi Kitazawa, Jim Lieber, and me.  Rex Levi captained the boat.  We were also excited to have with us a reporter and cameraman from TakePart.  Watch our website to see what they say about ODA in the next week or two.
The day started off smoothly, and we motored over to the site in no time at all.  We were treated to some gray whales passing by, as well as several pods of dolphins.  Along the way we passed dozens of those HUGE container ships that are still anchored off the coast waiting to be unloaded.  I sure hope there is nothing perishable on them, because if there is, well…I wouldn't want to be the one to have to open them.

The seas were relatively flat, with only 1-2 foot swells, and the underwater visibility was excellent at 20-30 feet.  As soon as we dropped anchor we saw more whales, which for us whale huggers is always a good sign and wonderful experience!

Underwater World Coming Back to Life

Walter was the first in the water, so he could get to the site and do some filming before the rest of the dive team go there and started doing their work-and clouding the water.  As soon as the debris removal divers start working on the net, visibility is reduced to near zero and filming is fruitless.

As you can see from these pictures, the site has some really nice wildlife on and around it including huge metridiums, which are a type of sea anemone, and many dozens of sand bass.  What is remarkable about the sand bass is that when we first started removing nets from this site about seven years ago, there were no sand bass here at all!

Literally, as ODA has removed more and more net, these fish have moved back in, and they are now much larger than they were just a few years ago.  This is a gratifying indication of two things: that they are getting older and more mature, and it is because ODA has created a safe habitat for them to do so.

On the first dive, the team attached some lift bags to sections of net.  This allows the divers to utilize the pulling force from the bags to carefully pull the nets off the reef structure.  Then they can cut around the edges until they have a section of net that is cut free, allowing the lift bags to bring that piece of net to the surface.

The dive team surfaced after a 40-minute dive.  After a surface break, the dive team headed back down the anchor line and started the careful process of cutting the net away from the wreck; we on deck soon saw lift bags floating on the surface.  We quickly got the RIB (Rigid Inflatable Boat) in the water and Jim jumped in to retrieve the bags as they began drifting away from us.  Unfortunately, as soon as Jim started to pull away, he found that the steering wasn't working.  Now we had three people in the RIB drifting away from us with no way to steer back to the boat… 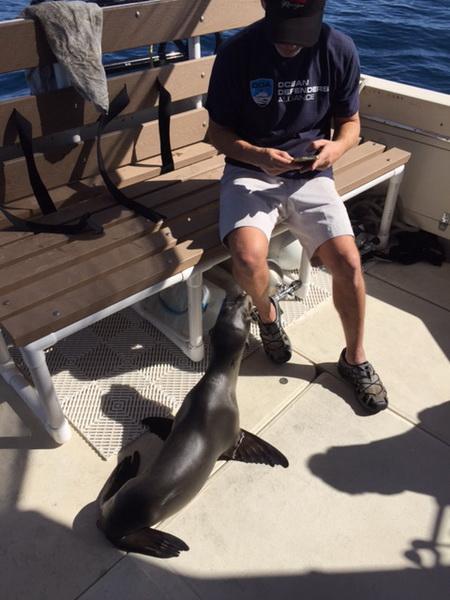 Of course we had radio contact with them and knew they were fine, so we waited patiently for the divers to surface.  While we kept our eyes peeled for lift bags to come up, we had a sea lion pup jump up on the rear dive platform.  He/she was too cute for words, and actually came onto the rear seating area and checked us out.  In this picture it looks like the little guy is hoping Rex is ordering out for an anchovy pizza.  As you may know, the sea lion population is having a very difficult time in southern CA right now.

Back to the Dive Scene

The divers surfaced after another 40-minute dive, and as soon as they were back onboard safely, we pulled up the anchor and got to the RIB and our three castaways. We quickly got them AND the RIB back on the deck.

We then started retrieving the five lift bags scattered around us.  We got all the bags and their contents hauled onto the boat and headed back to shore.

All in all it was a great day!  We saw lots and lots of wildlife and removed about 150 pounds of abandoned, deadly, fish- and mammal-entangling net.  Most of this net was made out of nylon, the material that scientists estimate will last 650 years or more in the water, actively destroying wildlife the entire time.

There was also some gill net mixed in with the pile.  Gill nets are constructed with monofilament line; the kind that is impossible to see is an even more invisible death trap for any fish, sea lion, shark, or dolphin that happens to swim into it.  Much remains to be removed, and you can bet we will soon return to do what we do best: remove this horrible ghost gear! 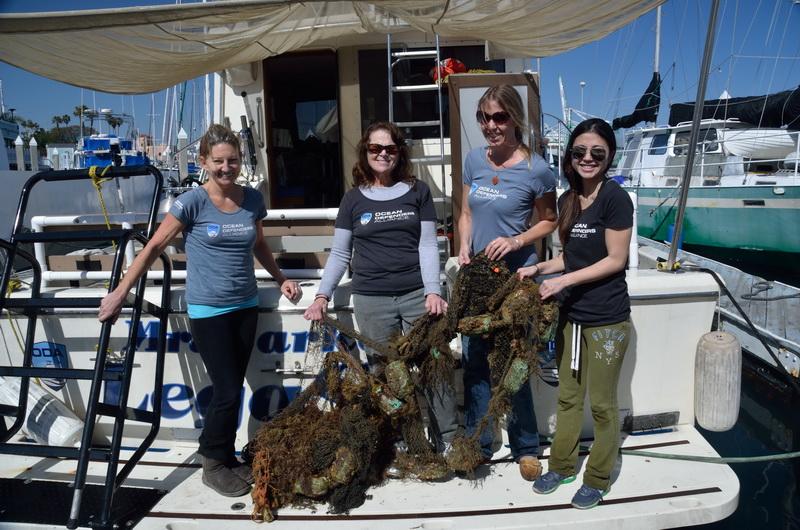 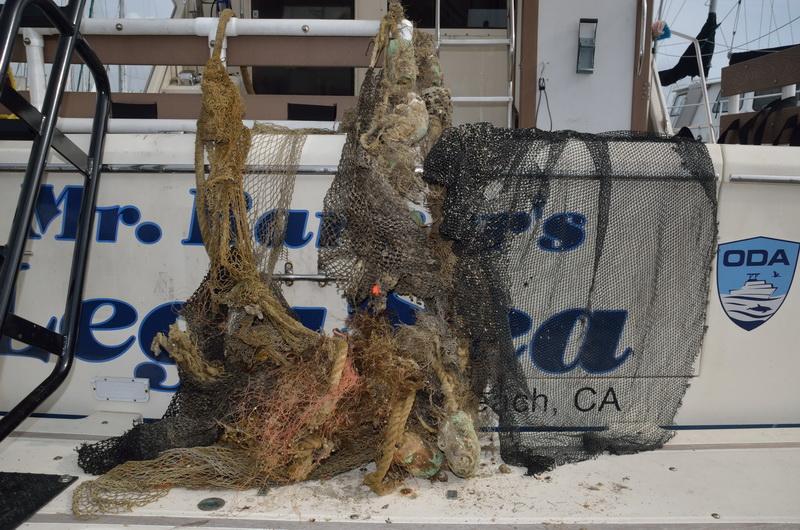 This destructive net is now gone, and ocean life is safer-at least in this area.  It is a fantastic feeling to be a part of such meaningful work, and without you we could not do it.  We look forward to seeing even more wildlife on this dive site in the very near future as we work to remove ALL of the net from this area, and we thank you, our fantastic volunteers and donors, for helping us make it happen!