After many outings being turned back due to big waves, we FINALLY got a break in the weather on Sunday, July 31st! 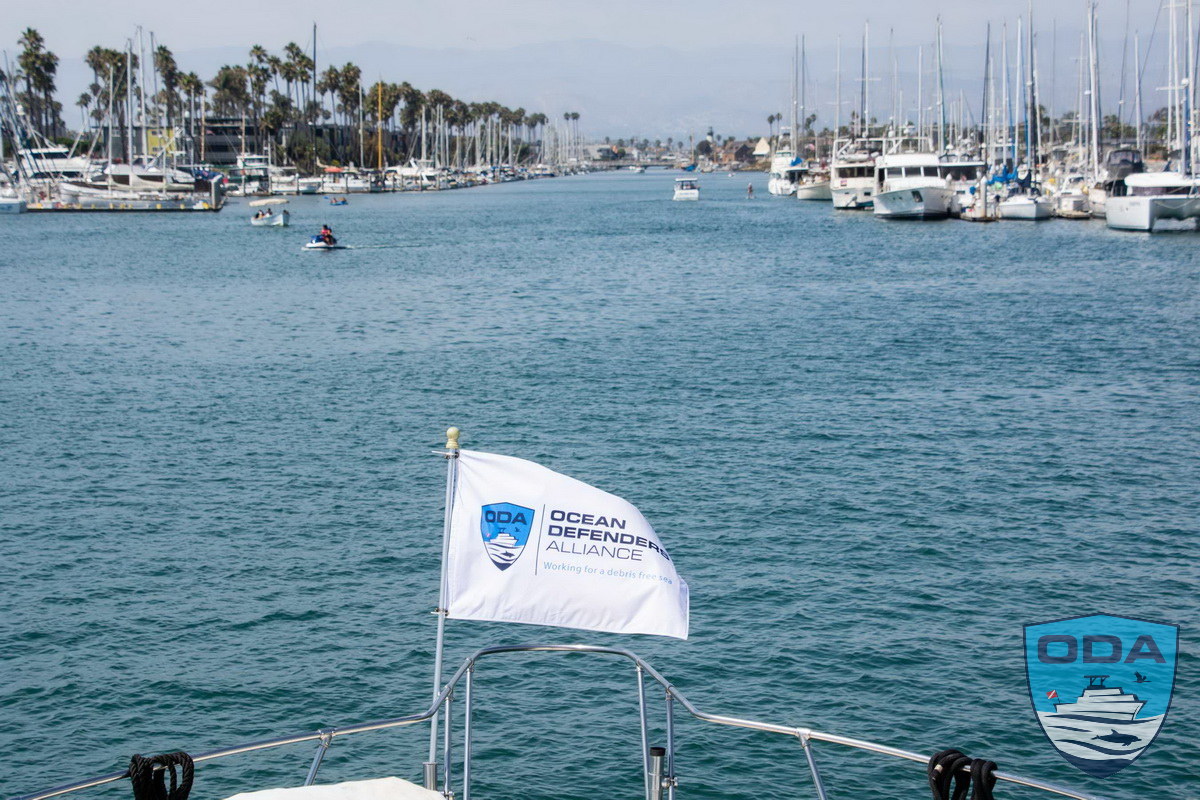 I’m not exaggerating that statement about turbulent waters as we’ve only had favorable dive conditions two times since April.  Even though we tried to get out during the “dry spell,” we seemed to always get pounded by the waves.

Watching the weather forecast, I spotted a window of opportunity, and put out a call for a dive team, with a boat crew.  Unfortunately, it seemed many of our regular volunteers had family obligations.

Nonetheless, we put together a small team of 4 divers and 2 deck crew. 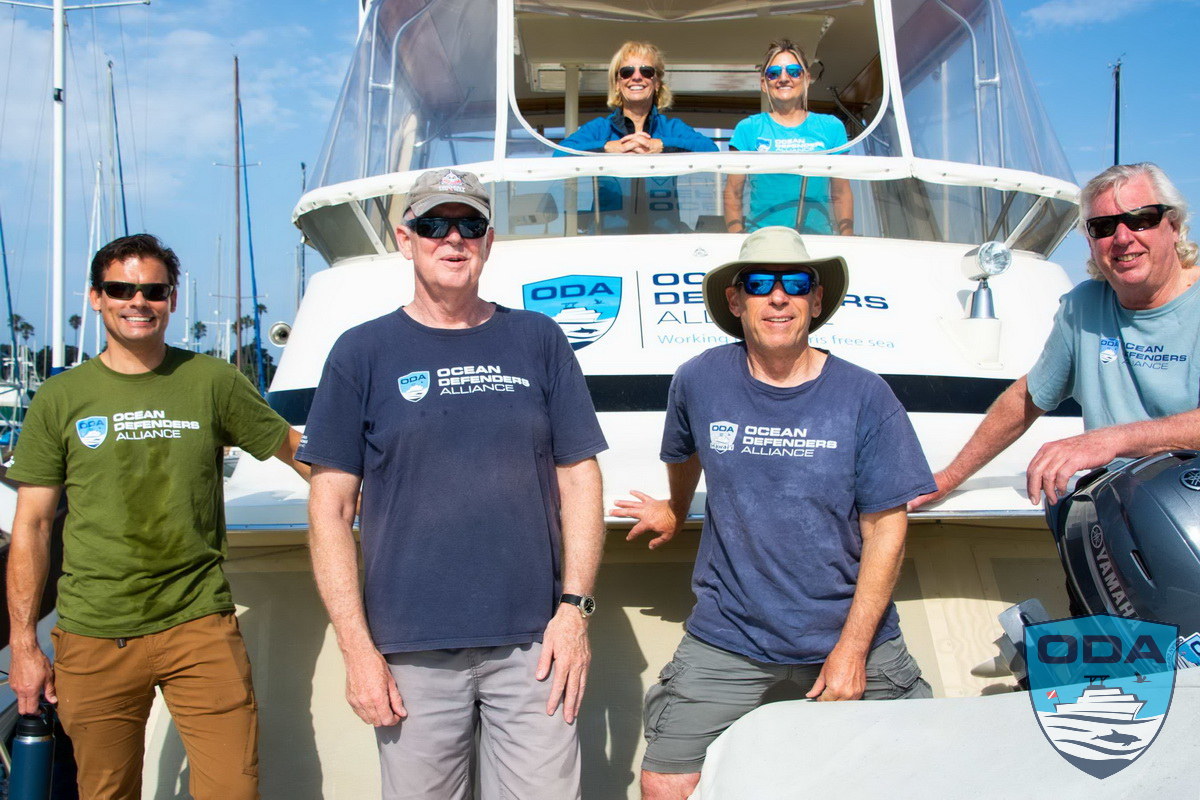 Divers were:  Kim Cardenas, Craig LaPorte, Geoff Walsh, and Mike Wynd.  Helping me out on the boat was Sue St. Sure.

We pushed off from the boat slip around 9:30am and were amazed at how flat the seas were.  Because of that, we decided to head 15 miles down the coast to a dive site called Harrisons Reef, which sits 200 yards off the coast of Malibu.

Geoff dives here a lot and has seen dozens of lobster traps set here during lobster season.  This location is on our “hit list” because we know that typical fishing practices would leave behind some abandoned traps and their whale-entangling lines. 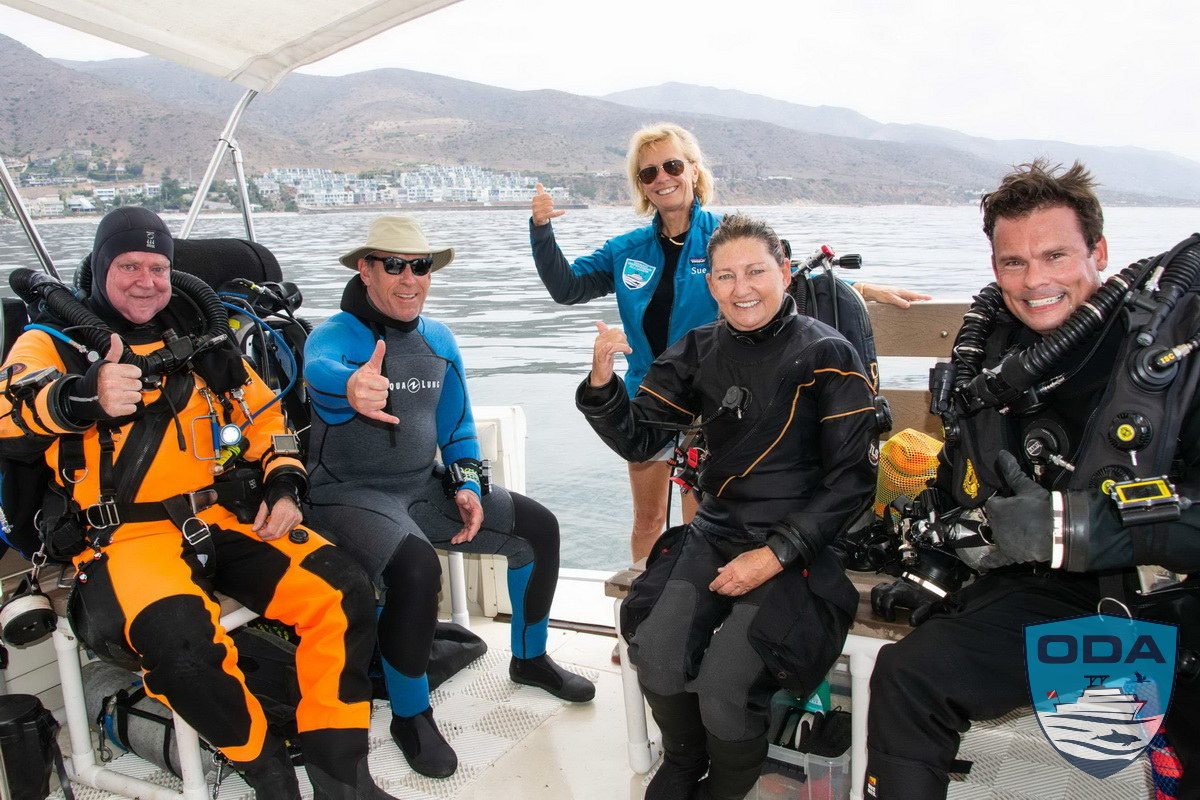 Smooth sailing along the Malibu coast

About seven miles from our boat slip in Channel Islands Harbor, there is a very distinct transition in the underwater environment.  As we were cruising, I made note of the bottom topography.  We were moving over a sandy bottom, which was about 100 feet down.  Then we passed a deep trench, where the bottom dropped to over 500-feet deep within a matter of a few hundred yards.

This area is known as the Hueneme Canyon.  It appeared to me to be about one-mile across as we transited along the coast.  Once we got to the other side of it, the wildlife changed dramatically.

We went from seeing a few gliding pelicans to huge congregations of seabirds, sea lions, and dolphins. 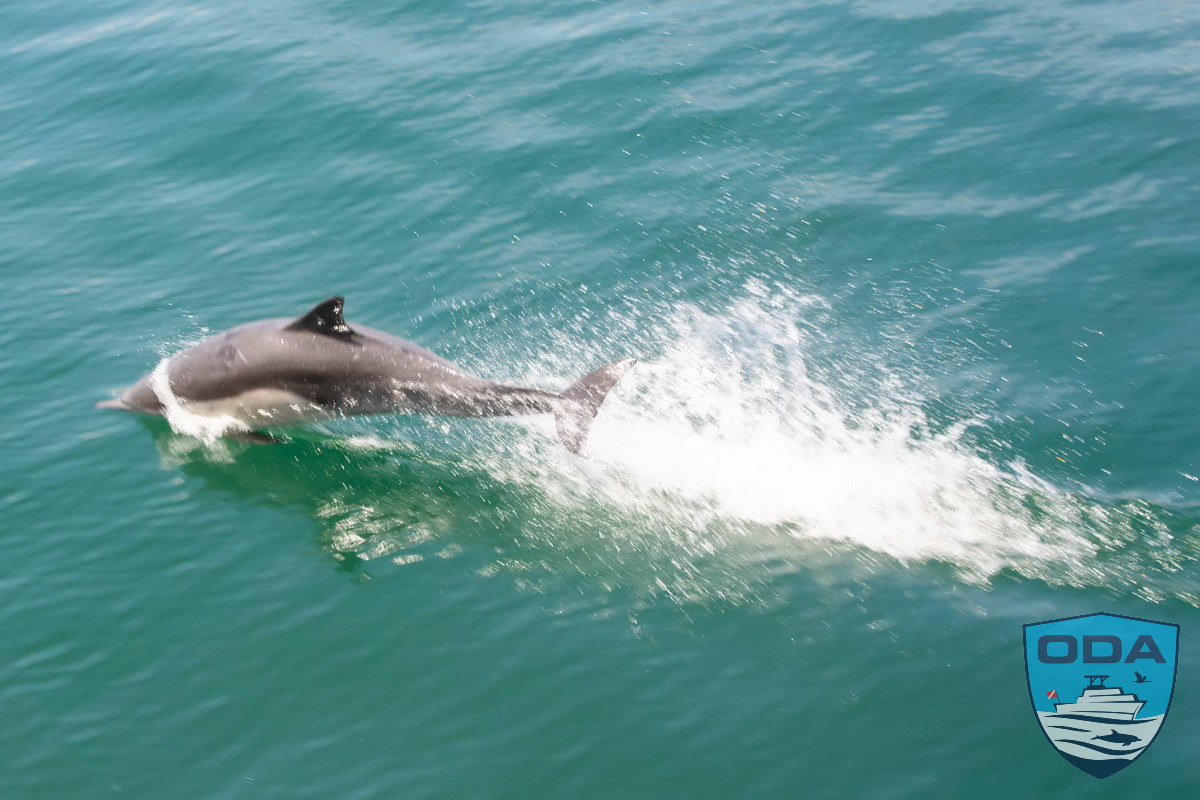 You could see fish jumping out of the water no doubt trying to evade the dolphins from below and the birds diving on them from above.  It was quite the site to see.

I didn’t want to get too close for fear of chasing them off and interrupting their lunch feast.  So unfortunately, we didn’t get close enough to take any pictures worth showing you.  However, we did get a some pics of a few dolphins that would break away from the feeding to have some fun by “riding” our bow wake.

At one point Kim was on the bow enjoying the frivolities and could almost touch them when they came up for a breath of air. 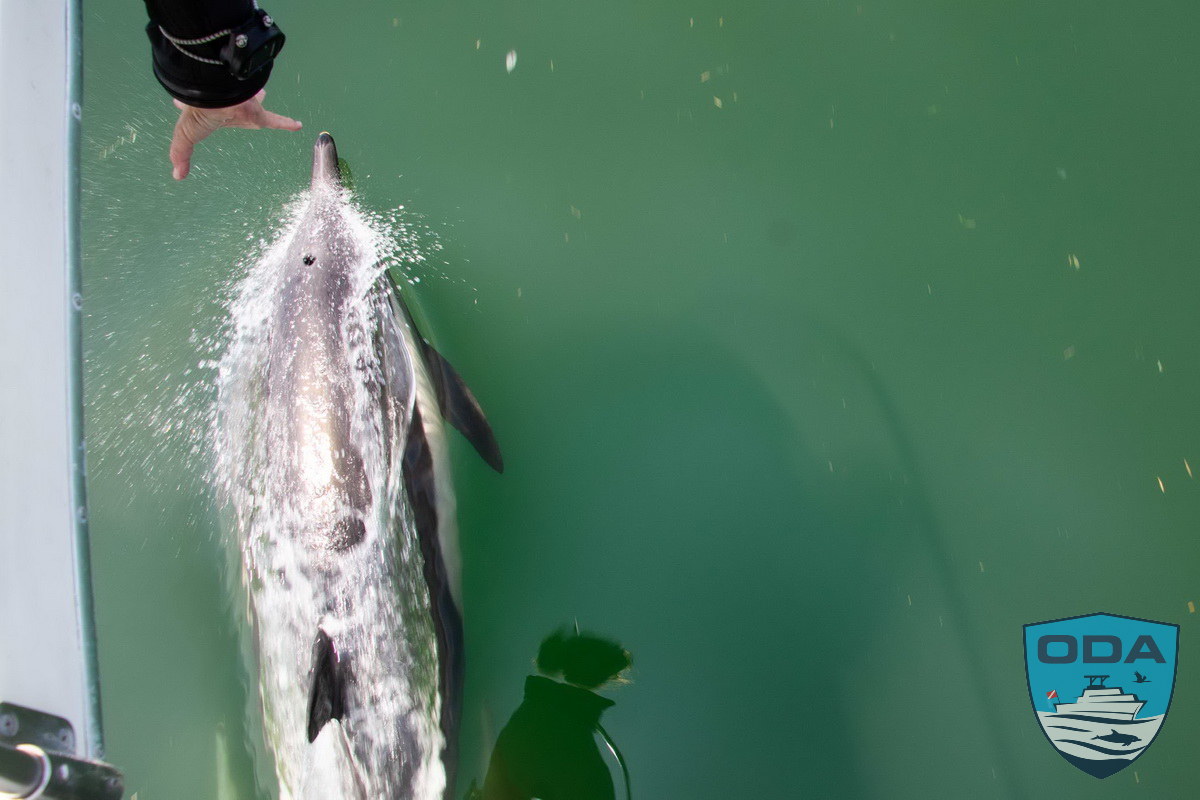 It took us an hour-and-a-half to get there, but we finally did, and dropped anchor in 50 feet of water. 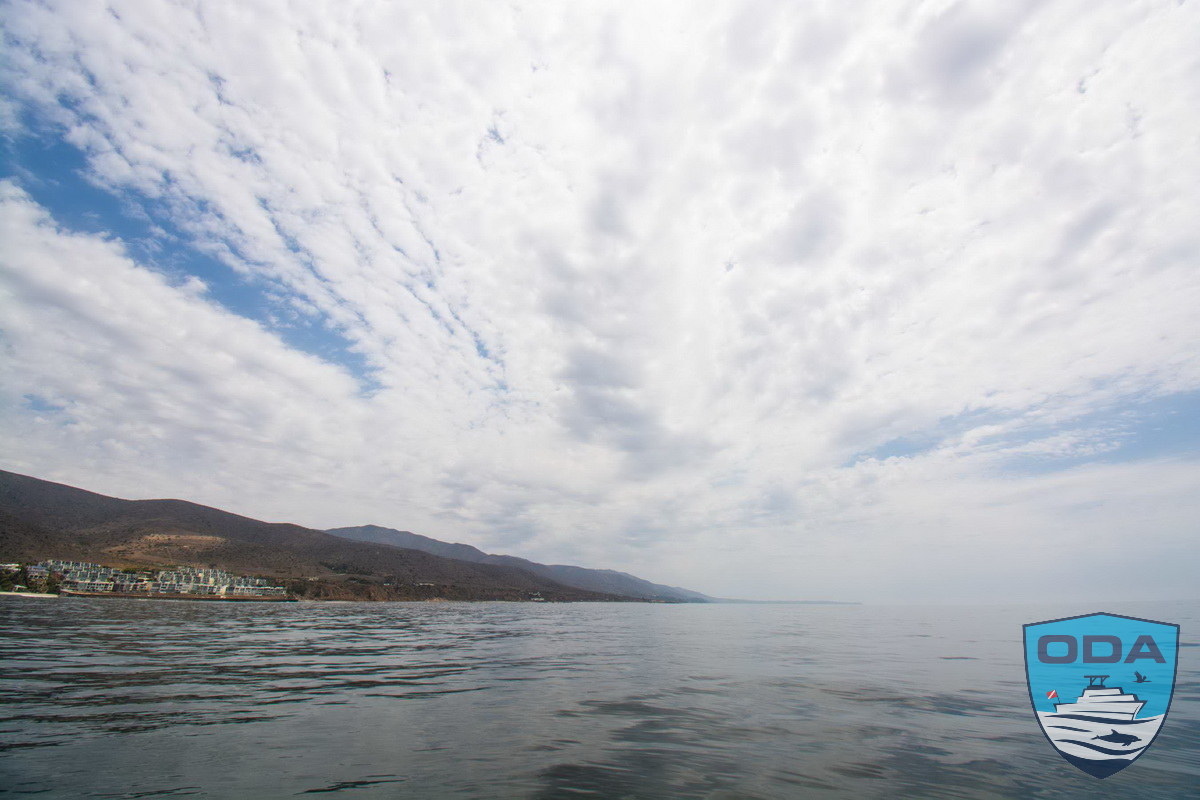 Geoff told Kim, Craig, and Mike what to expect on the dive, and they all headed down around 11 o’clock.

Here's a cool pic of Craig about to enter the water. 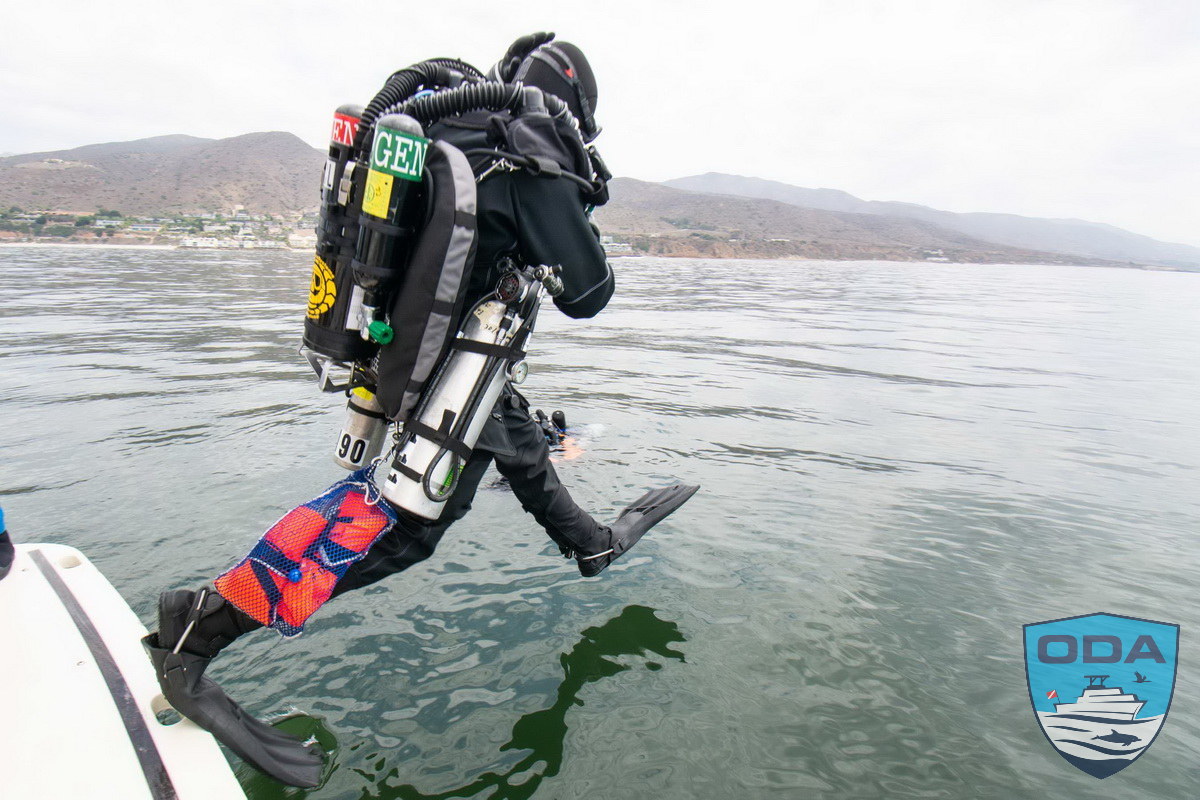 As soon as they splashed into the water, you could tell the underwater visibility (vis) was NOT going to be on our side… Dang.  We could hardly see their fins. 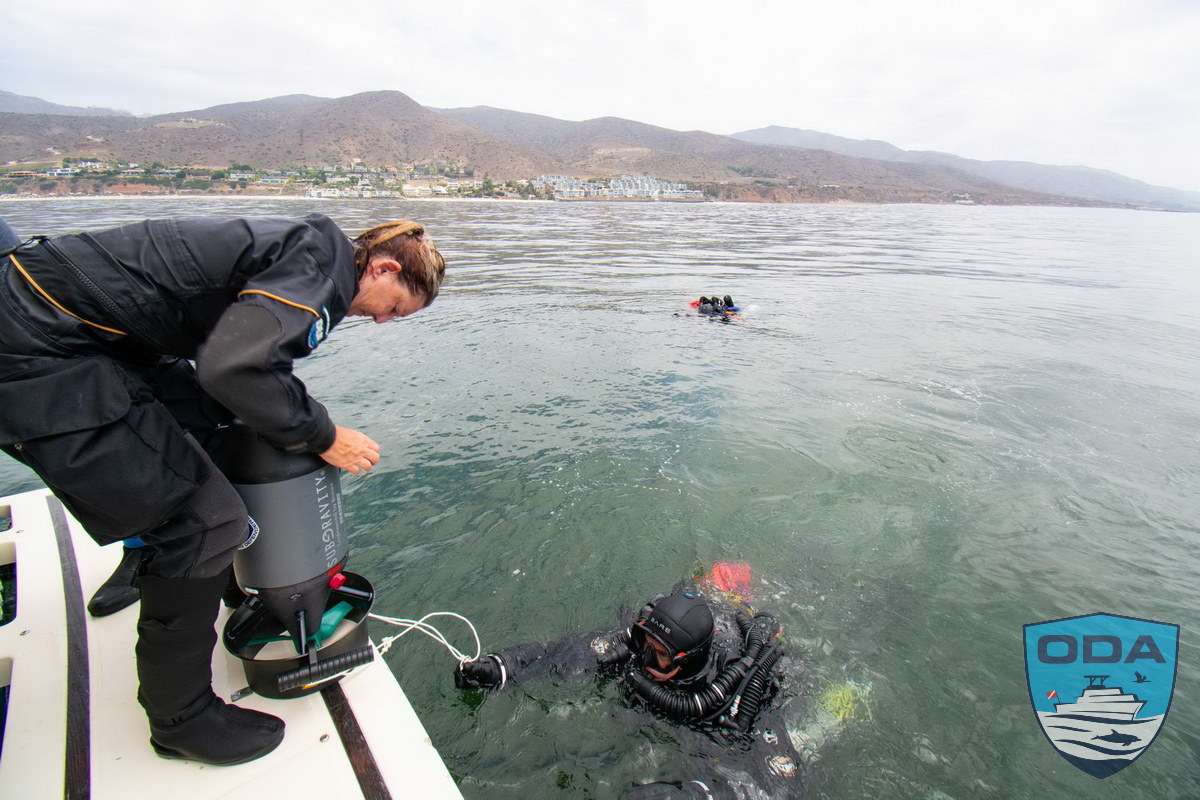 Kim and Geoff did the same a few minutes later.  Sue and I sat watch on the boat for about 30 minutes when we saw a lift bag hit the surface in front of the boat.

The seas were so flat that you could see the reflection of the ODA lettering on the bag as it floated by us. 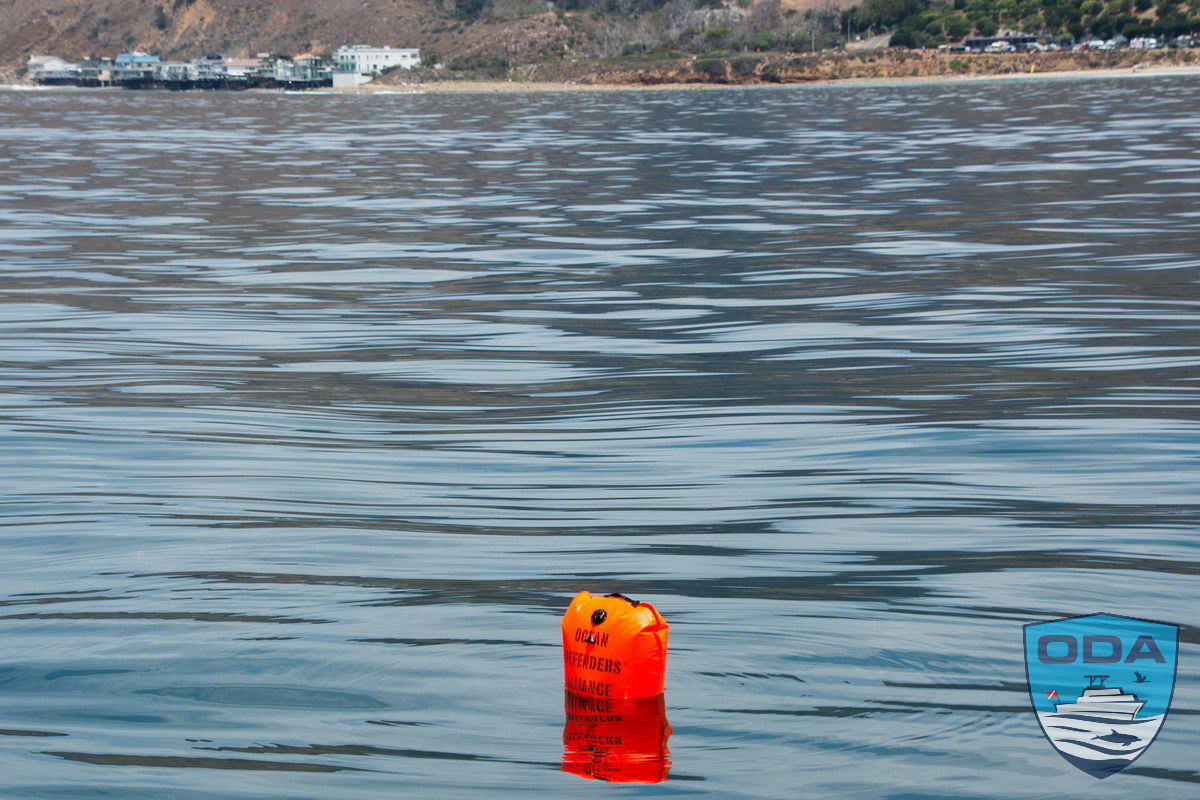 Craig and Mike surfaced separately, and once they were onboard, we heard about how bad the vis was.  Less than 5 feet!  It was so bad that they got separated twice, found each other both times, and then lost each other for the rest of the dive…

Kim and Geoff surfaced about five minutes later and were several hundred yards in front of the boat.  They used their scooters to get them back to the boat in no time at all. 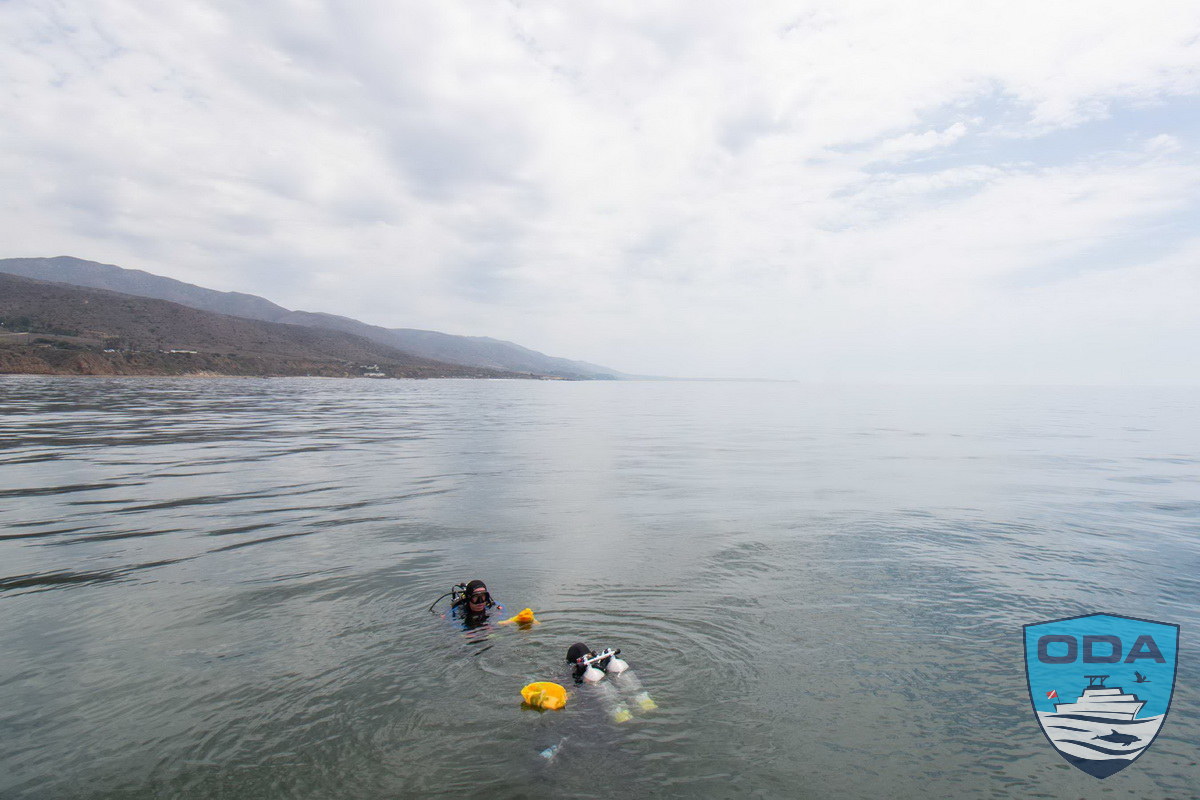 Once everyone was back on the boat and out of their gear, they shared their stories about what they saw and what they didn’t see.  Mike saw a five-foot Angel shark, which is a rare occurrence.  Craig saw a large halibut.  Geoff and Kim saw lots and lots of reef fish, including Garibaldis, kelp bass, crabs, and a few sea lions.  They all talked about the clouds of bait fish swimming at the surface.  Most likely sardines.  No doubt this is what the dolphins were chasing.

What they didn’t see were any abandoned lobster traps, although Craig did stumble across one section of a trap and that was what he had sent up with the lift bag. 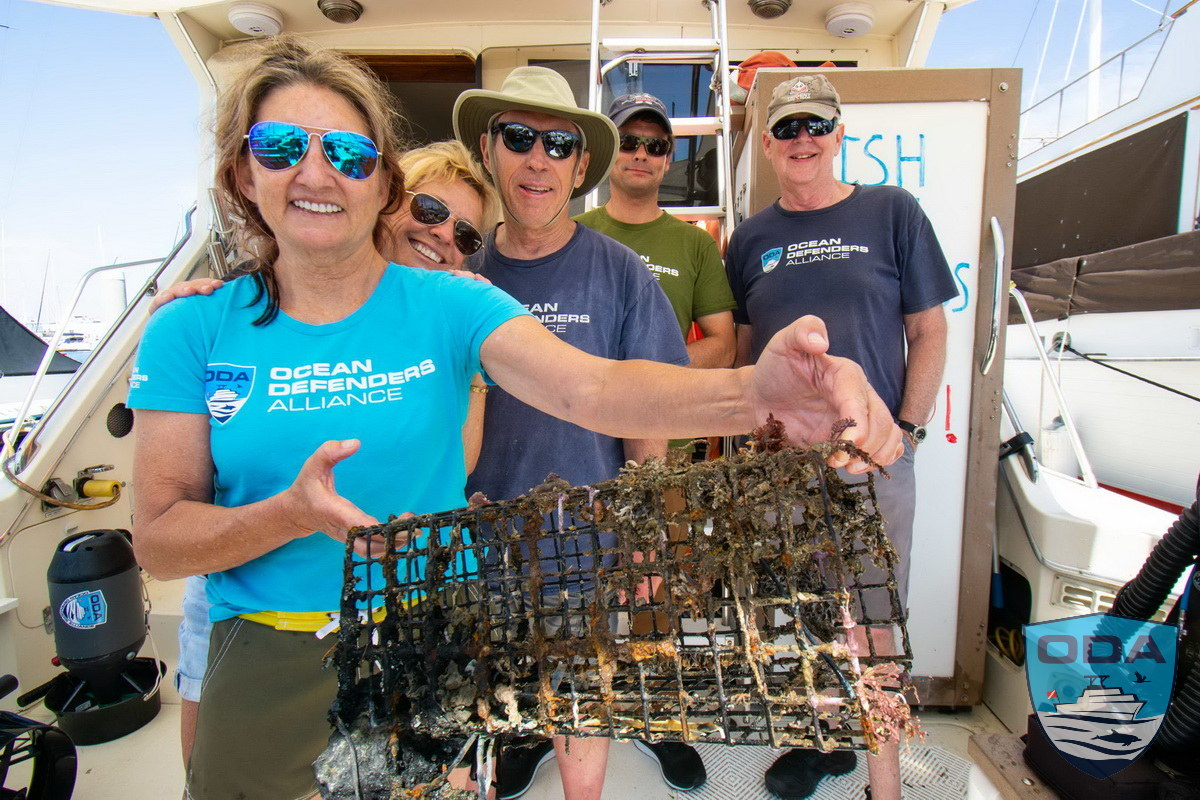 Because the vis was so bad, we decided to give it another go in the future.

As we pulled back in the harbor, we talked about how grateful we are that on the great majority of our dives we return with a bow-full of abandoned fishing gear…and that led to discussion of how amazing our partners are – the ODA donors – for caring about ocean wildlife and their habitat. We’ll never give up trying to defend them from the relentless onslaught of marine debris!