One of our dive partners on the Big Island of Hawaii is Kohala Divers, owned by Rebekah and Gregg Kaufman. They’re located on the northwest coast of the Island. 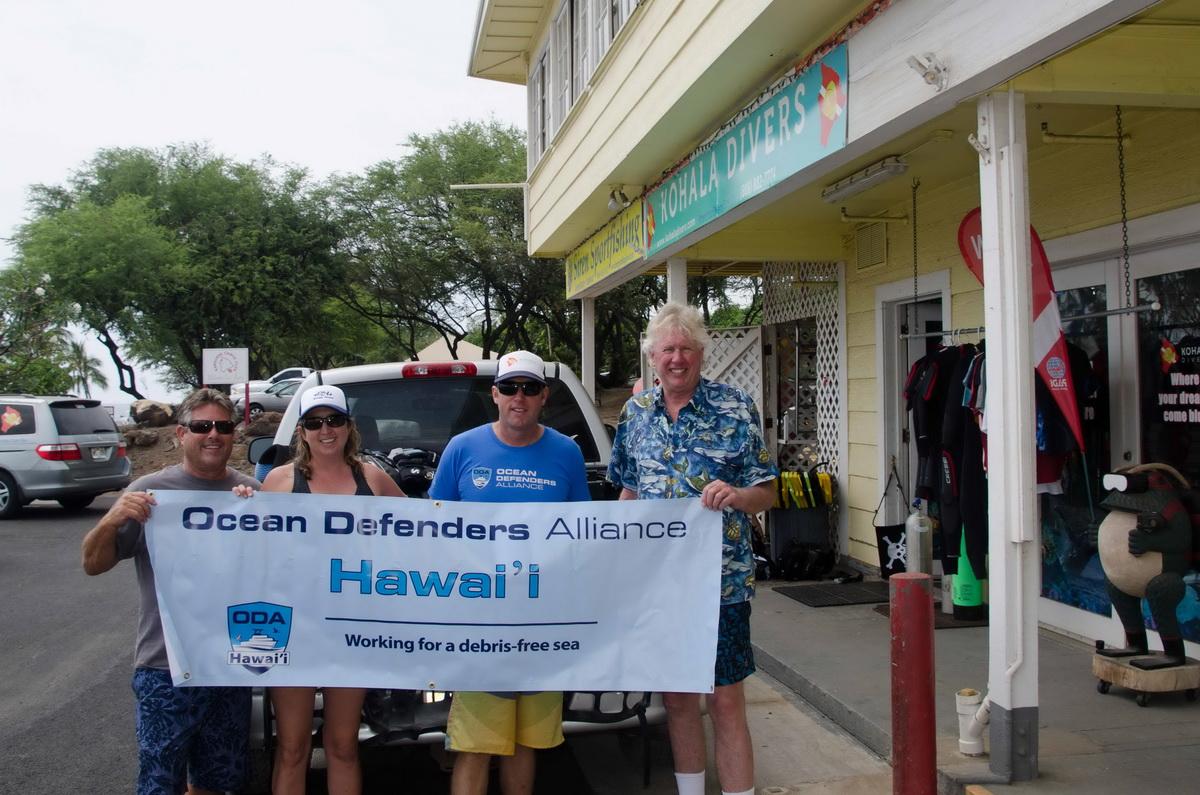 Rebekah and I had been planning an underwater cleanup dive in Kawaihae Bay for several months and finally we able to plan it for Sunday, January 27th.

Our goal was to continue cleaning a site that’s near where the Army has a ramp. This ramp is where they practice getting their amphibious vehicles on and off the transport vessels, called Tank Landing Ships.  The last time we worked this area was September of 2018, and even though they had vessels going in and out all day, we were working far enough away from them that the divers could do their work without fear of interfering with any of the Army’s operations.

So, I contacted the Harbor Master and told her about our plans.  She said it was OK, but that there would be boats there again.  I told her how it all worked out for the best last time, and she said she was fine with that.

We met up at the site around 9am and noticed that this time there was a really big vessel in the area we wanted to work in…dang.  There was no way we could work safely around that boat… 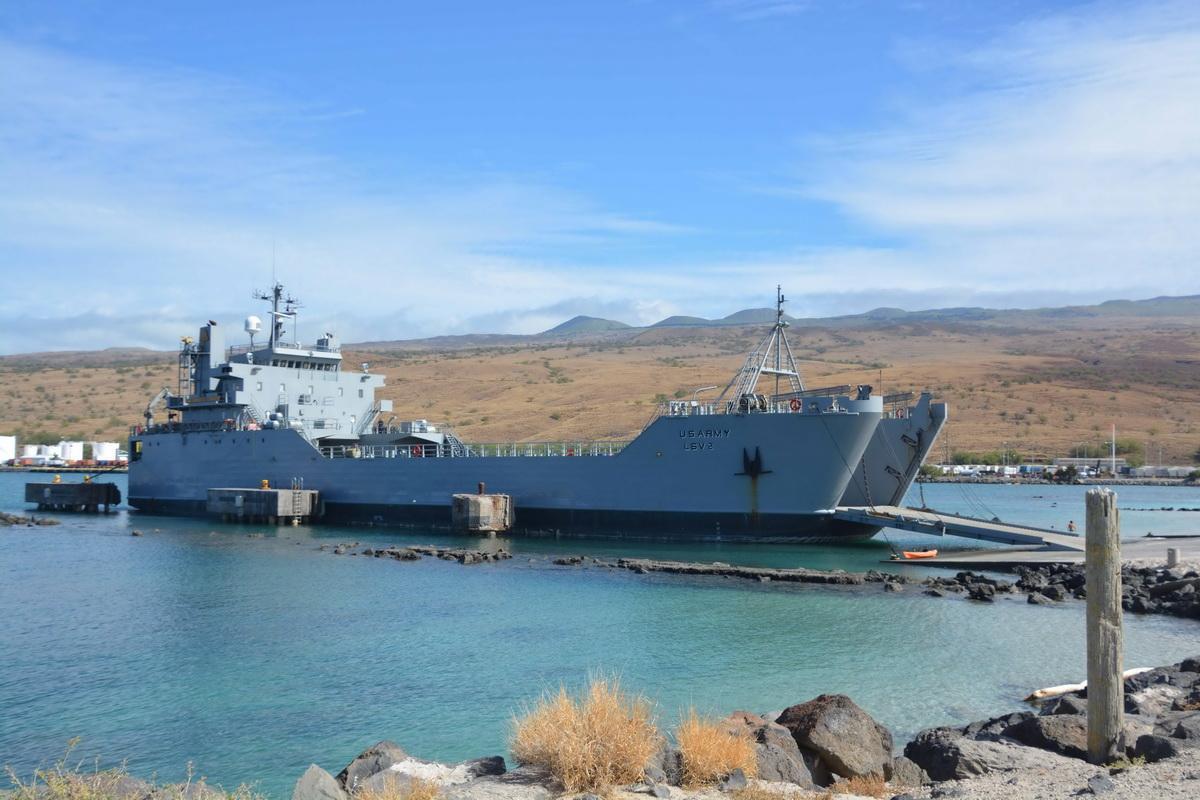 So, we went to Plan B.  We would work on the outside of the breakwall.  Gregg said that he had seen lots of debris there in the past and he had also spotted several tires.  Tires you say?  We love getting those chemically-laden things out of the ocean!

As with every ODA dive, we held a meeting prior to diving in so that everyone knows who their partner is and how to work together to remove debris safely. 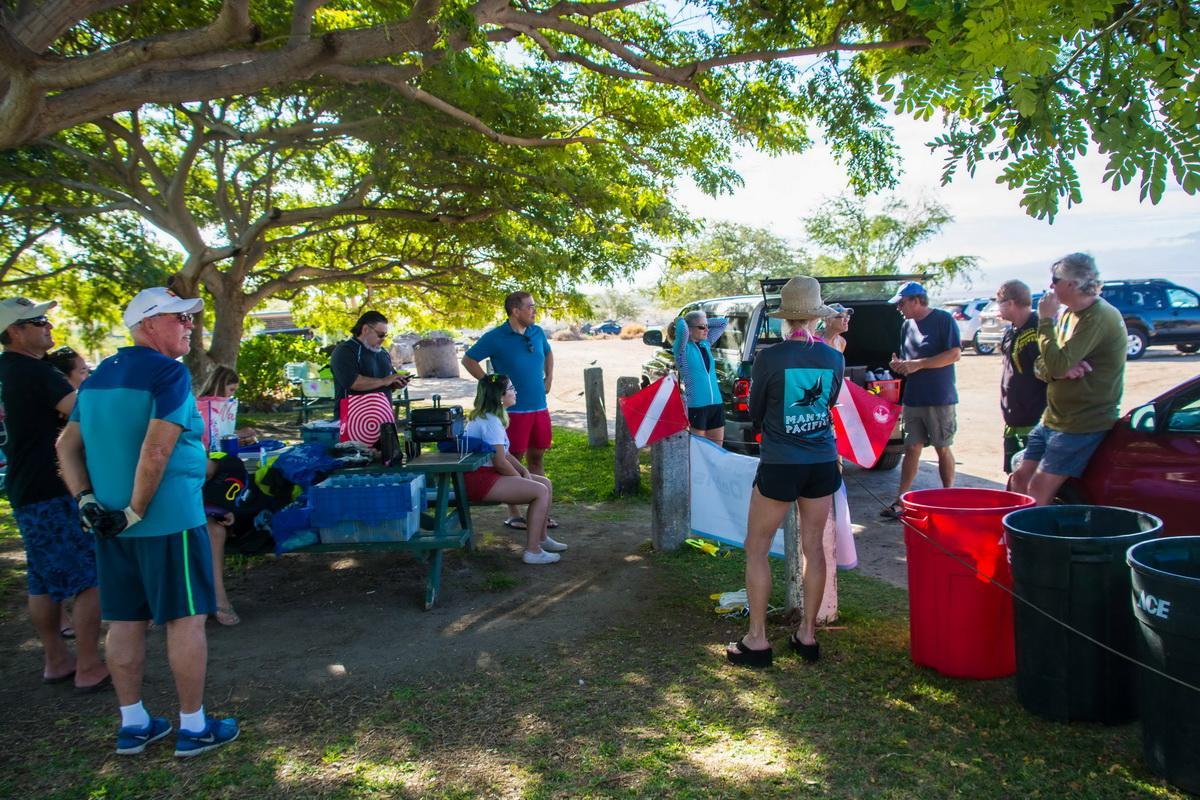 After a briefing, eight divers suited up, made their way to the ladder that would lead them down to the drop off point.

Leading the divers this day was Chuck Weber, who is a dive instructor.  The other divers were: Radine Coppersmaith, James Kregness, Brendan McDougall, James Sturz, Sheryl Weinstein, Ava Williams, and Kean Wong. 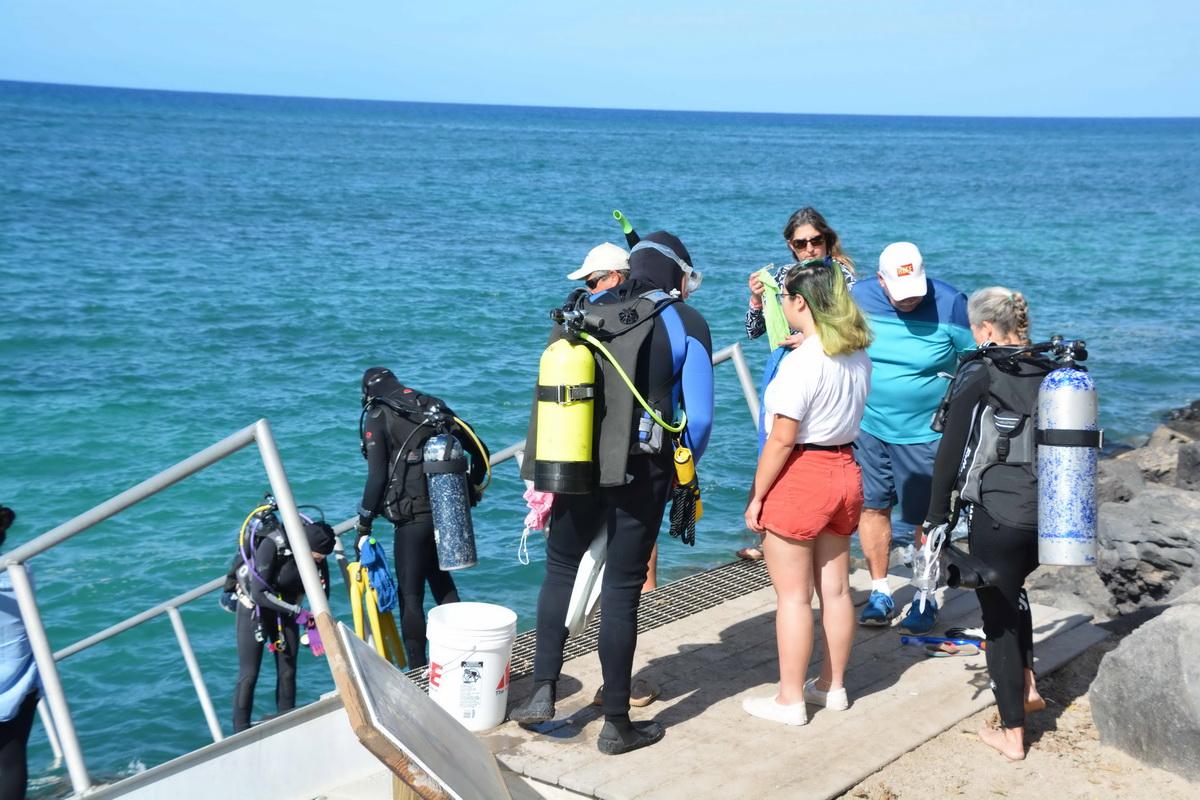 Adding to this star-studded cast were Kiana and Arie.  Nice to see such young folks joining in our efforts to clean up the oceans! 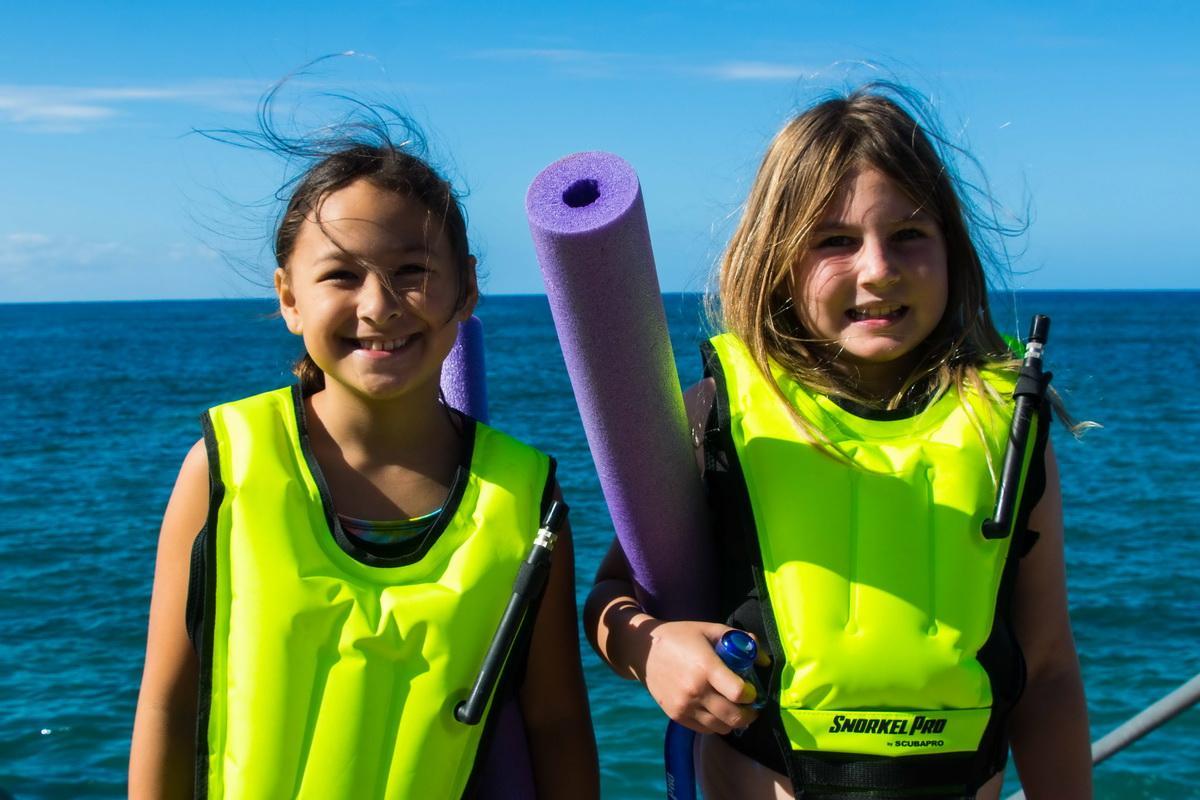 As the divers dropped down, you could tell underwater visibility wasn’t going to be very good, and it turned out to be pretty bad at less than 15 feet.  There was a strong surge in the currents, and it kept getting worse as time wore on.

The divers were down about an hour, and came up with some bottles, beer cans, golf balls, hundreds of feet of fishing line and lots of lead weights.  The haul weighed about 100 pounds, which might not seem like much, but all of it was potentially hazardous to the turtles, fish, and corals that call this place home. 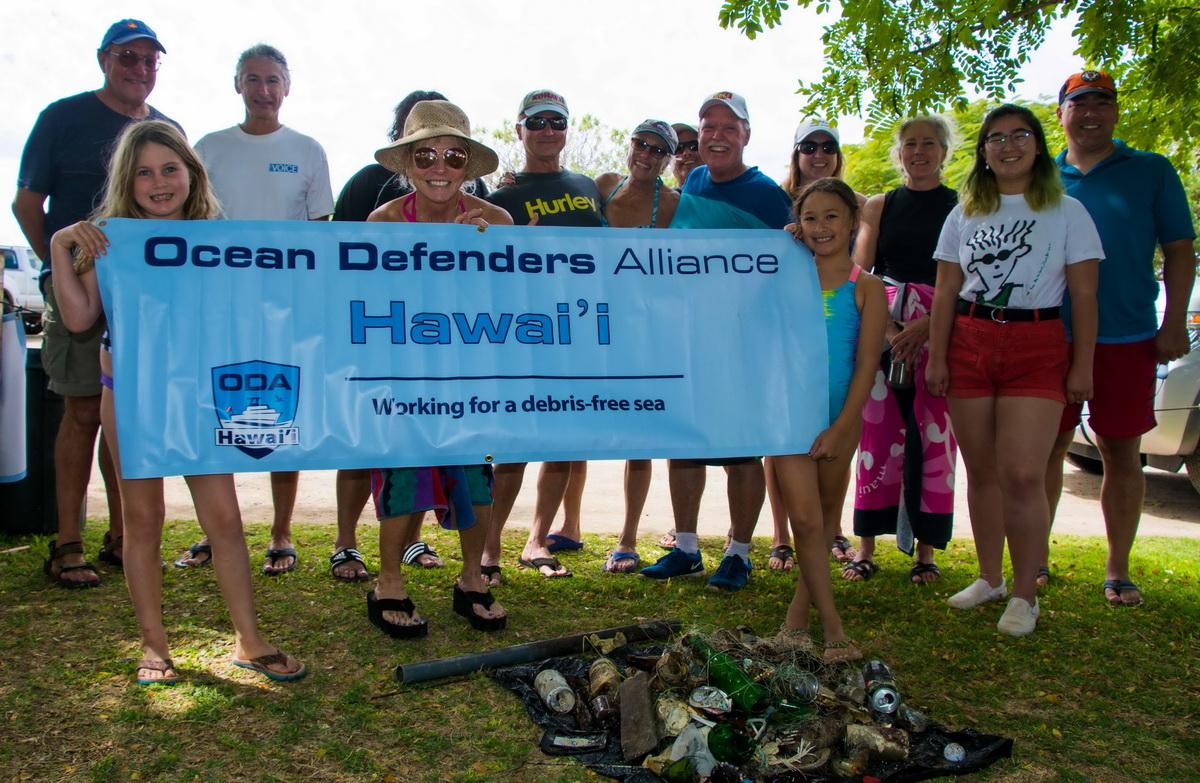 It was just great having so many people show up.  Half of them were veterans of ODA cleanups, and the other half were newbies.

After the dive, we sat around and ate some food that everyone brought to share and talked about our next cleanup.  We have a new site in mind and will tackle it in May.  So, stay tuned, and hope to see more of you out there next time.

We all had a blast, and while we were sitting around telling our BIG FISH stories, Kiana and Arie were still at it, bags in hand, cleaning up the parking lot.  How can you not be optimistic about the future, with that kind of dedication to our oceans?!?!

If you're on the Big Island and want to take part in any of our ocean, beach, or harbor cleanups, please drop us a line at ! Thanks for caring about our oceans!