ODA Hawai’i had an epic day—this time on the Big Island!

As we head toward the end of 2017, it has become increasingly clear that our efforts to expand our activities into Hawai’i are not only necessary, but deeply appreciated by the locals I’ve met so far. We are honored and humbled to work in this area with the wonderful people of these paradise islands.

After spending a few days on Maui, I landed on the Big Island (BI) on Tuesday, December 5th.

I timed it so I could attend a two-day seminar in Kona hosted by NOAA. The main subject was the health of the coral reefs that surround these islands. I know: Awesome, right? It was, but also sobering.

I remain hopeful, but this conference highlighted some of the challenges facing local reefs; ghost gear (along with other dangerous/plastic debris) is definitely a problem.

Before I even arrived, my pro-active friend Cynthia Ho sent an email to several ocean-loving people, telling them I was excited to “talk trash” (get it?) with anyone who cared to know more about the destruction that man-made products have wrought on our marine wildlife, and maybe even do some ocean-related cleanups together while I was here.

One person got in touch with me immediately: Jae Robertson. Over the course of several weeks, Jae had been informing me about a net in the surf zone along the west coast of the BI. I met up with him on Friday, December 8th, to go look at the site and figure out the best way for us to get that deadly hazard out of there. 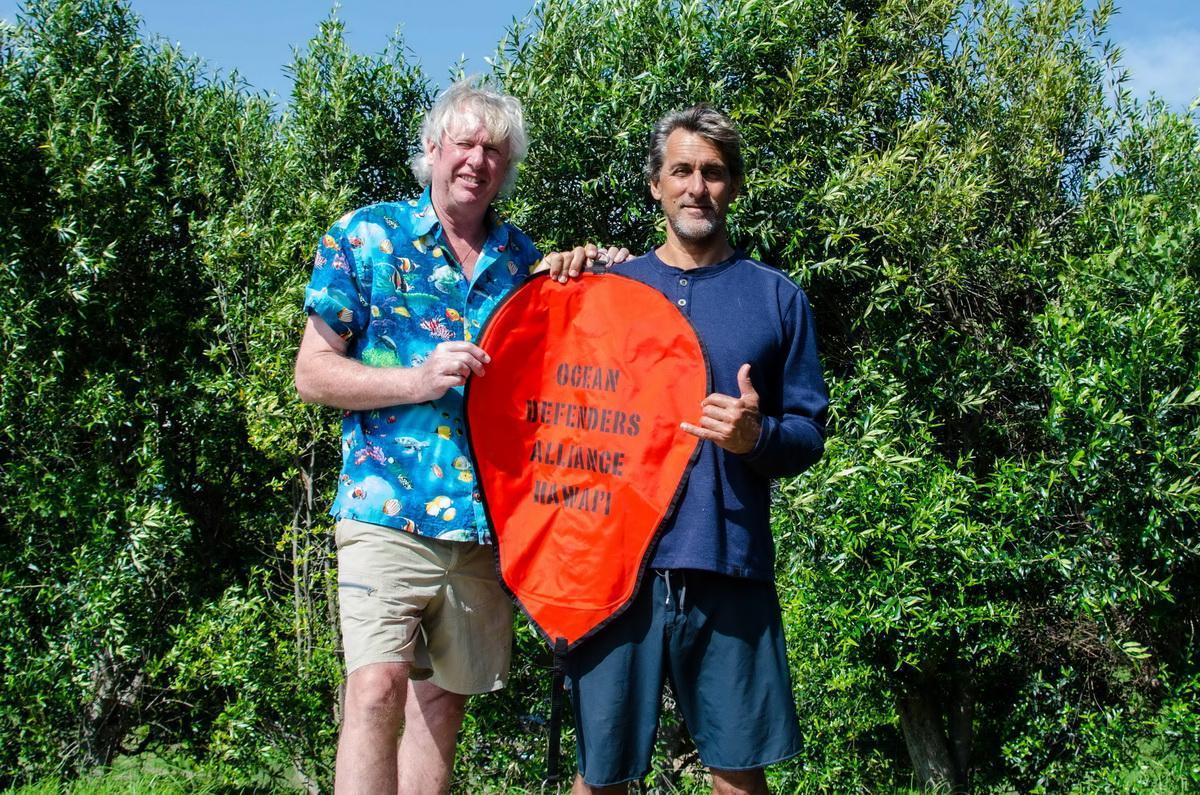 This area is very remote. Fabulous for the seclusion and peace of wildlife…but getting down to the water’s edge was a challenge, to say the least.  We were totally “driven” to get to this marine debris; the debris can “try” to hide but Ocean Defenders are always committed to finding it and removing it!

We jumped in Jae’s 4-wheel drive and headed down a “road” (more like a path) that was nothing more than crushed lava rocks.  As we headed down said road, there was an ominous sign: a huge 4-wheel drive vehicle sitting to the side with its massive tire gone flat—and the rubber of the tire shredded like a piece of cheese that had wrestled with a grater…and lost.

When we finally, and thankfully, got to the beach he pointed out the net. I could see it clearly, but getting there was going to be as difficult on us as it was on that truck we passed. 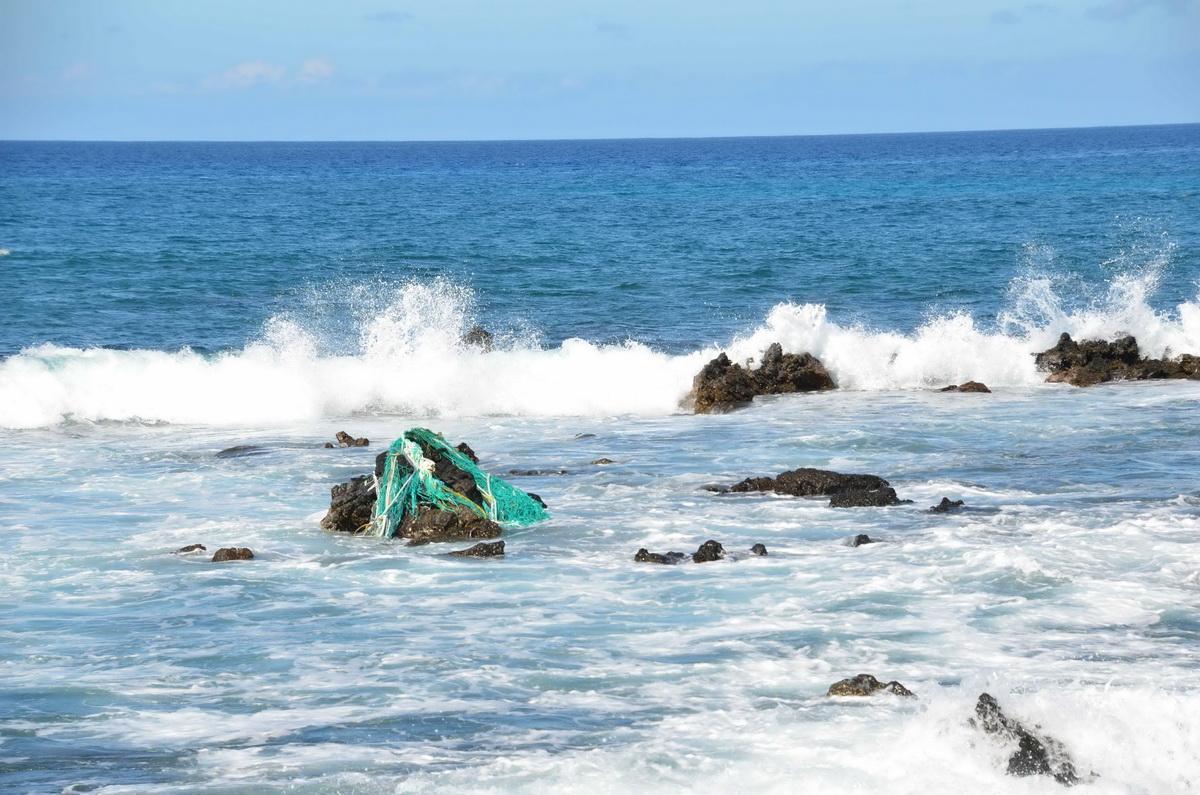 It was half in and half out of the surf zone (a super hazard for marine animals), and about 300 yards from where we stood. Not a bad walk if it was on pavement or sand, but the entire area was a varied lava flow. Not the smooth kind of lava, but the kind that looks like every piece of it was meant to pierce something, a tire, a shoe, a leg—perhaps even a cranium.

Jae is a surfer, fit, and has lived here most of his life. As I followed him, I saw he was completely at ease traversing this beach: kind of like watching a Mountain goat climb up and down a rugged cliff without losing a breath. I, on the other hand, was wondering “How can I get out of this and keep my ego (and body) intact?!?”

Since I didn’t see an easy escape plan, I followed Jae ever-so-slowly, making sure each step landed on safe footing. Those rocks had more cutting edges than a broken piece of glass: One slip to either side could result in a jagged gash.

When we finally got to the net, I could see it was going to be a difficult task. It was plastered over a lava rock, and sat there getting hammered with each new wave that came in. It was a tangle of many different nets and had a HUGE line running through it. The line through it was 2-1/2 inches in diameter and made of some kind of plastic. 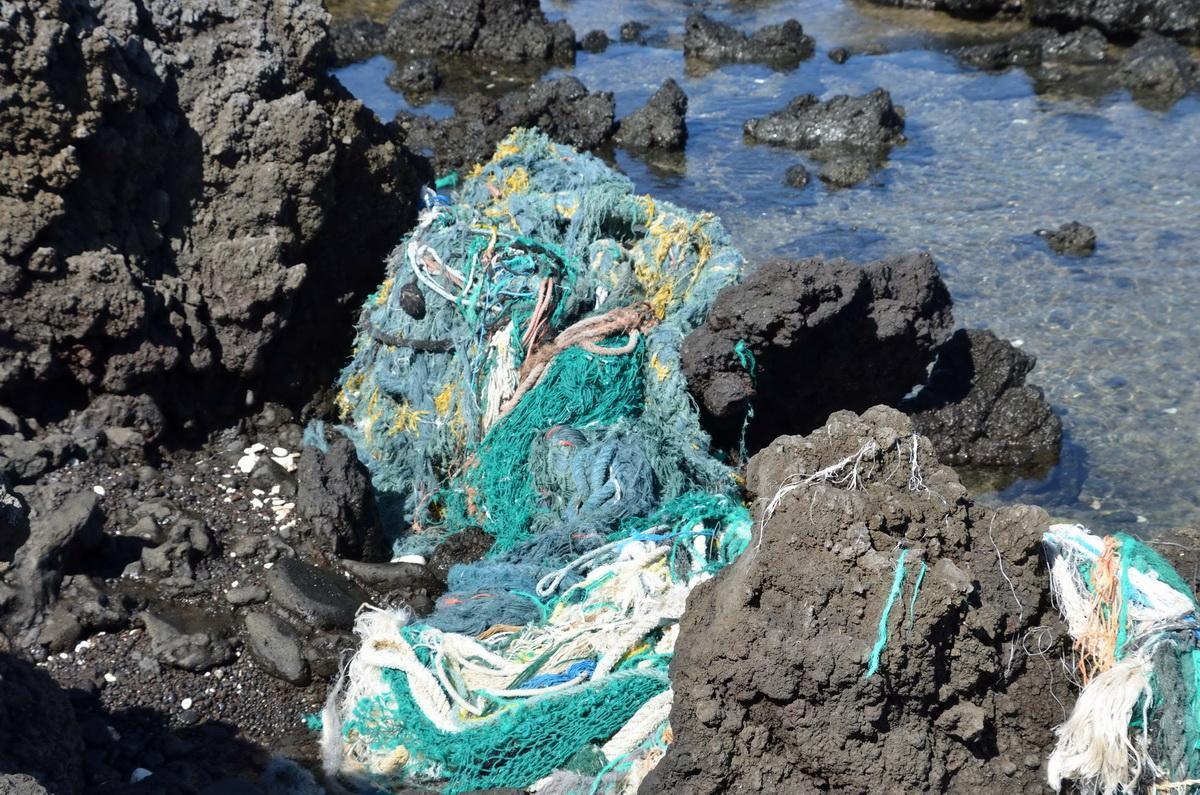 Jae told me that there was another net on the other side of a rock outcropping. So, we hiked over to it…and it too was a mess—on a lava rock jutting out from the bottom of the flow and poking about three feet out of the water.

Luckily, I have a lot of experience in how to cut through net and line like this and knew exactly what knife would do the job. Unfortunately I only had one of them with me…

After we finished scouting, Jae and I ran around that afternoon trying to find someone who sold the kind of knives we needed. We found two who would probably do the job.

We agreed to meet the next morning. Two of Jae’s friends would meet us, and together we’d get all that stuff out of the water. See how our alliance grows?!

When I arrived that morning, Jae was already soaked to the bone with salt water and sweat.  So were his buddies: Mike Varney and Todd Clark. The four of us hacked away and cut the massive pile into 60-70-pound chunks that we could lug out of there. This photo Mike wearing some of the thick rope as he makes the 300-yard trek to our staging area. 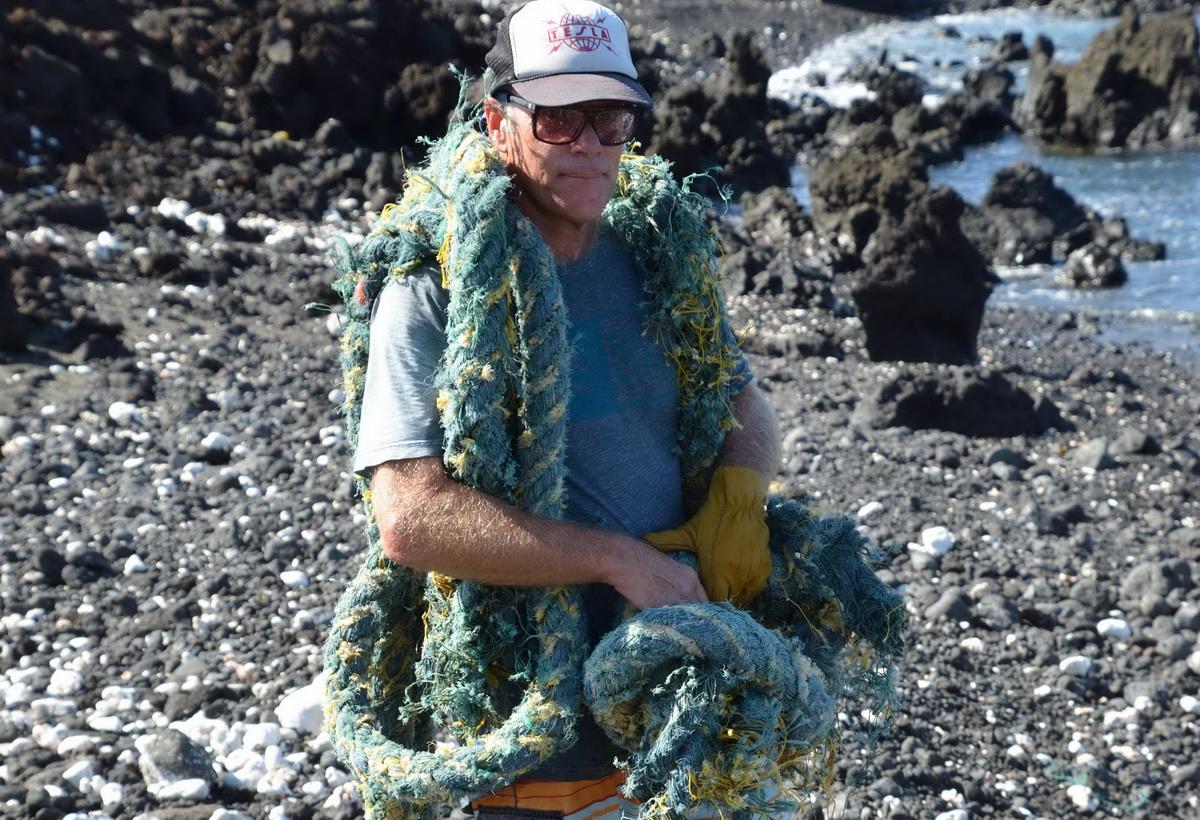 After two hours, we had all of the first net cut up and hauled to a staging area. Next, we started on the other net. By this time two more ocean defenders had arrived: Lono Humphreys and Aimee Croteau. Before too long, I had to leave to meet with a group of lovely folks from Kohala Divers. We were scheduled to go do an underwater debris cleanup that afternoon. So much to do in these islands!

As I was leaving I looked back to see Jae up to his neck in the water, trying to get more net off the lava rock. That is a lasting image in my mind. Jae, you are a net-pulling warrior!

Three more people showed up after I left: Asher Robertson, Zane Robertson, and Bill Foster. Here's a fun shot--even the dog got in on it--and there are a lot more in the photo gallery below - be sure to check them all out!

They got all the net out of the water and to the staging area, so it could be hauled way. They also removed hundreds of pieces of broken up buoys and crates. 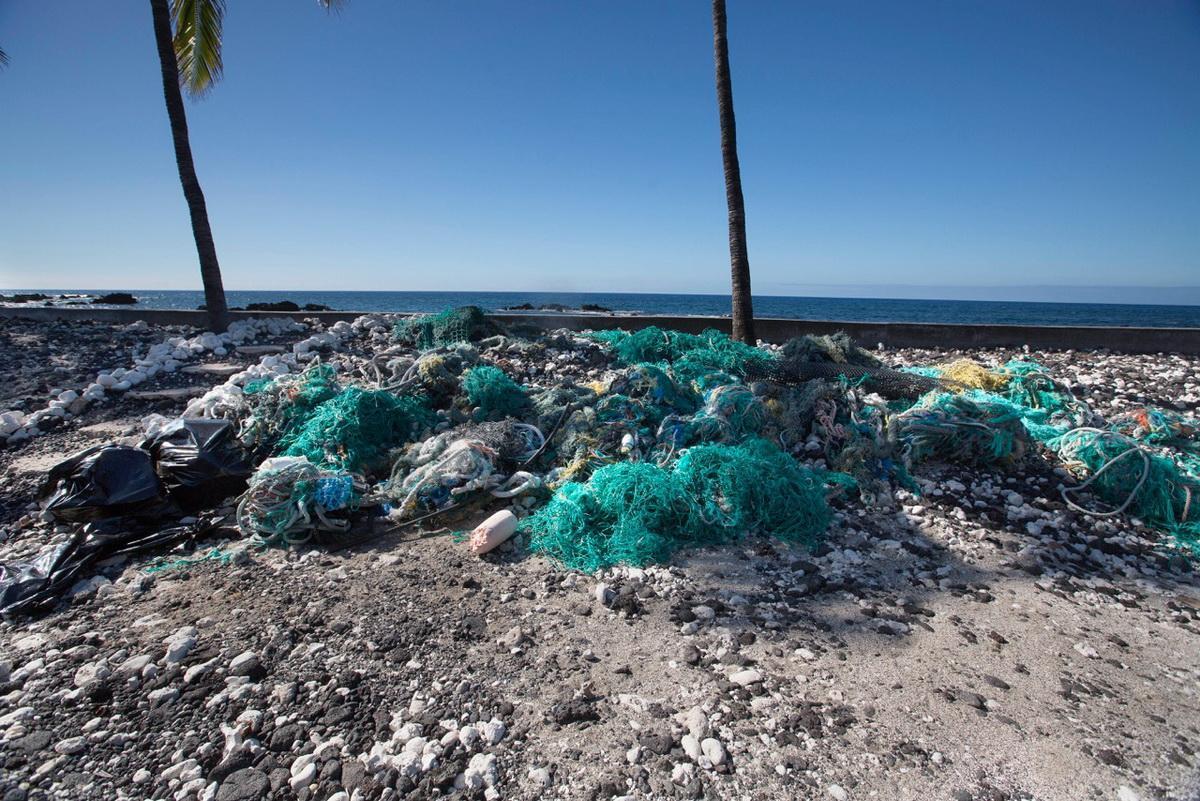 The area was a mess when we began, but now looks entirely different. And much safer for marine wildlife! Especially to the turtles, whales, dolphins and fish that call this magical place home. I like to imagine them nodding in silent approval.

Mahalo to EVERYONE who made this a HUGE day for ODA – and ocean life – on the Big Island!