In Memory of Mike LaPrade 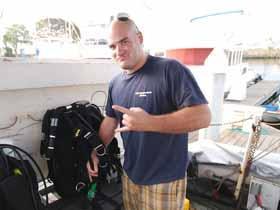 On July 24, 2011, ODA lost a great friend, colleague and a morale booster with the accidental passing of Mike LaPrade. Mike was 27 years old and died while doing what he loved - deep sea scuba diving. Mike was diving on the wreck of the infamous Andrea Doria in the Atlantic Ocean at depths of over 250-feet. This was to be a dream come true for him, as this site is the "Mt. Everest of Scuba Diving". The exact cause of death is still being determined.

The following are comments from a few of us who knew and admired Mike:

Mike LaPrade started diving with ODA in 2009 when we were removing nets from the Caissons. He was a delight to have on-board and in the water. The work we do can be pretty depressing, dealing with these ghost nets that just keep killing animals for months, years and decades. Mike took this very seriously, but at the same time, was always cracking jokes and livening up the mood of the entire boat.

The last time Mike came out with ODA was in June of 2011. We went back to the INFIDEL for 2 days to resume removing that net from the wreck. When the got down to the site they found a new net, this time with 6 dead sea lions entrapped. Mike was visibly shaken when he got back to the surface. On the second dive Mike LaPrade, Mike Wynd and Andrew Ainslie cut the seal carcasses away and also found a Cabezon that was trapped in the net. Mike cut that fish out of the net, and you could see the joy in his face as that little fellow swam to freedom. Back on deck, he had a huge smile on his face.

That was the essence of Mike LaPrade, despite the grim reality of what humans are doing to our oceans, he liked to look at the bright side. In his last email to me, he said he could hardly wait to get back to the INFIDEL, that he had had fun....What a guy and what a delight to be around. We will miss you my friend, but your spirit lives on with every net we remove and every fish we release.

Mike and I met shortly after I moved to the States three and a half years ago. He'd been technical diving for a short while and was about to start diving rebreathers and I clearly remember the insatiable barrage of questions. The 'what', the 'how' and the 'why'. For some reason, despite me being old enough to be his father, we just clicked and he became one of my best friends.

Over the years Mike built up his rebreather skills to become an integral part of our team on the deeper and more demanding dives. Whether cruising in the kelp in the Casino Point Underwater Park or investigating a shipwreck at 100 metres, Mike's passion for diving was infectious. Even when conditions were bad his enthusiasm would make for an amazing day.

I was reminded shortly after his passing that Mike would often say "I like everyone...!". Well, everyone loved Mike. It may seem like a cliché to say that I'm a better person for having known him, but in this case it's absolutely true. I'm going to miss him terribly.

About three years ago I first met a young diver with more energy than a Labrador puppy on a boat. He wanted to learn everything, do everything, see everything.

He was half my age, but that never really seemed to matter. At first I thought that it was because we shared a common passion - but as I watched more closely, I realized that Mike was one of those unique people who can make friends with anyone. He had no enemies, no one spoke badly of him, and any time his name came up in a conversation, people smiled. "That Mike!" was a common opening.

His mischief was legend. There are way too many stories to fit in here... But on our second last dive he quietly attached all his stages to my buttring. I was watching my iPod and didn't notice which frustrated him, so he started nudging ant pushing me. When I finally started to turn, floundering like a beached whale, I heard him - and everyone above me - chuckling. He spent the whole deco moving up and down the line talking to people, hugging Julie Brown, and causing more chaos. He provided entertainment for all of us on the 3-hour hang.

He showed up to an Ocean Defenders boat in pjs one day with a ratty white bathrobe. I mocked him about it and he just told me I was jealous. Next trip he bought me a leopard print snuggy which he insisted that I wore.

Underwater he was like a bulldog. The net removal project loved him because he would stay down longer, work harder, lift more net than anyone... And stay cheerful throughout the tiring, sometimes depressing work as we lifted carcases off the bottom. He would take on any project. Tyler Stalter's "new wrecks" aka rock piles seemed to amuse him more than anything - even at 300 feet.

I will miss you so much, Mike. We all will. Rest well, you've earned it. You touched us all.

Mike was an amazing blessing to the diving community. Besides being one of the more talented divers I have ever met, he was by far one of the most fun guys on every boat I was on with him. He was extremely generous, constantly letting me borrow gear. This is such a blow to the diving community. I will miss having Mike around. His amazing attitude and contagious laughter will never be forgotten. I knew very few people who loved being in the water as much as he did!

If you wish to make a donation to ODA in Michael LaPrade's memory, you can provide a gift online via PayPal or by send a check via US Mail. ODA will notify Mike's parents and grand-parents that you made a donation in his honor. In order for ODA to know it's a gift in memory of Mike, please add a note in the comment section at Paypal, or include a paper note/memo with your check. To get started, please visit ODA's Donation Page.

ODA is a registered 501c3 non-profit organization. Donations are tax deductible to the full extent of the law (please consult your tax advisor). Thank You.