UPDATE: We had three media outlets come to our event! One had a quick clip on the news that we couldn't capture, but here is a link to another report with great photos: https://www.civilbeat.org/2021/09/slideshow-diving-for-tires-and-trash-in-kaneohe-bay/

After months of planning, I finally landed on Oahu last week, September 8th.  With Covid-19 still running amuck amongst us, travel restrictions have gotten tighter but doable.

Two big goals on this two-week trip is to do underwater (UW) cleanups at two sites that we have never worked before.  One on Oahu, and the second one on the Big Island of Hawai’i. 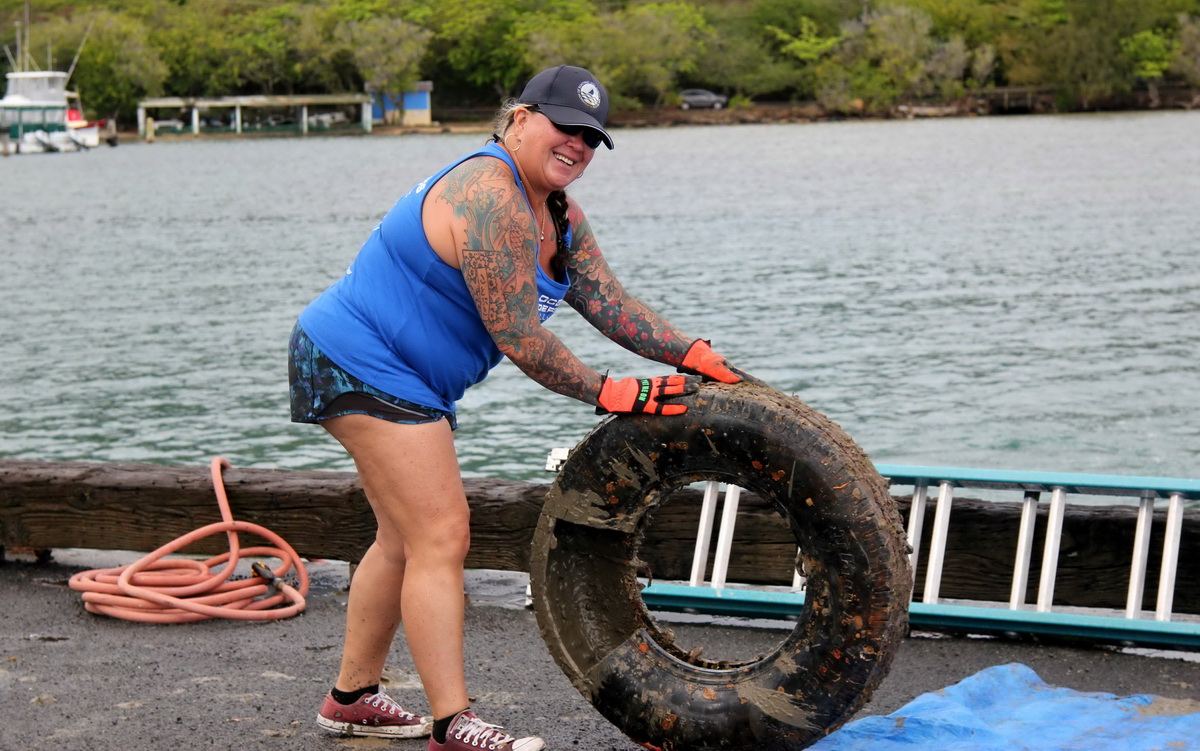 Ken Staples and Glenn Roberts introduced me to the Harbor Master of Kaneohe Small Boat Harbor the last time I was out here.  Her name is Tanya Borabora and she has been a big cheerleader for ODA ever since we started conversing with her.

All our conversations have revolved around doing an UW cleanup in the harbor.  And we set a date to finally make the plunge, September 12th, a Sunday. We were fortunate to have the event covered by three media outlets. More about who helped make that happen below! :-)

A shout out to Ken Staples, for continuing to be the ODA-Hawai'i "masthead."  He's continually reaching out to different agencies to expand the range of our projects, reaching out to the community in general by educating them about the damage that marine debris causes, and getting more and more volunteers to join our outings. Mahalo, Ken! 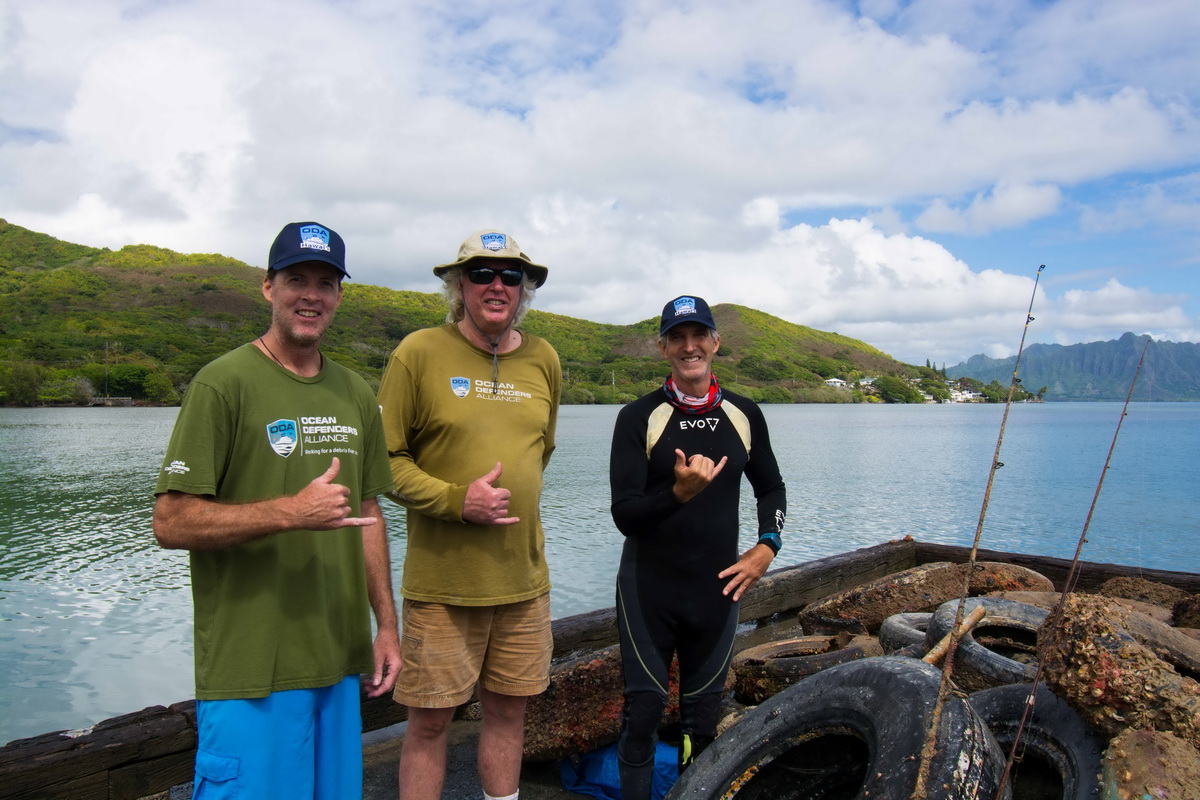 As I was driving from Honolulu to the east side of the island where Kaneohe Bay is located, I received a text from long-time California volunteer Dave Merrill.  He was taking a boatload of divers and deck hands to cleanup an UW site near Ventura, California.  Dave often captains our boat Mr. Barker’s LegaSea when I’m away.

Dave informed me that once he got the boat outside the harbor he had to immediately head back to port.  They were getting slammed by five-foot waves…second weekend in a row that we got blown out by huge waves.

Now as I headed to the Kaneohe Harbor it was raining dogs and cats.  Oh, great I thought, were we going to cancel this cleanup as well?  The rain was getting worse the closer I got to the harbor.

That is, until I finally got there.  There was a little drizzle, but not enough to dampen our spirits!  In fact, we had the beauty of a rainbow to encourage us even more. 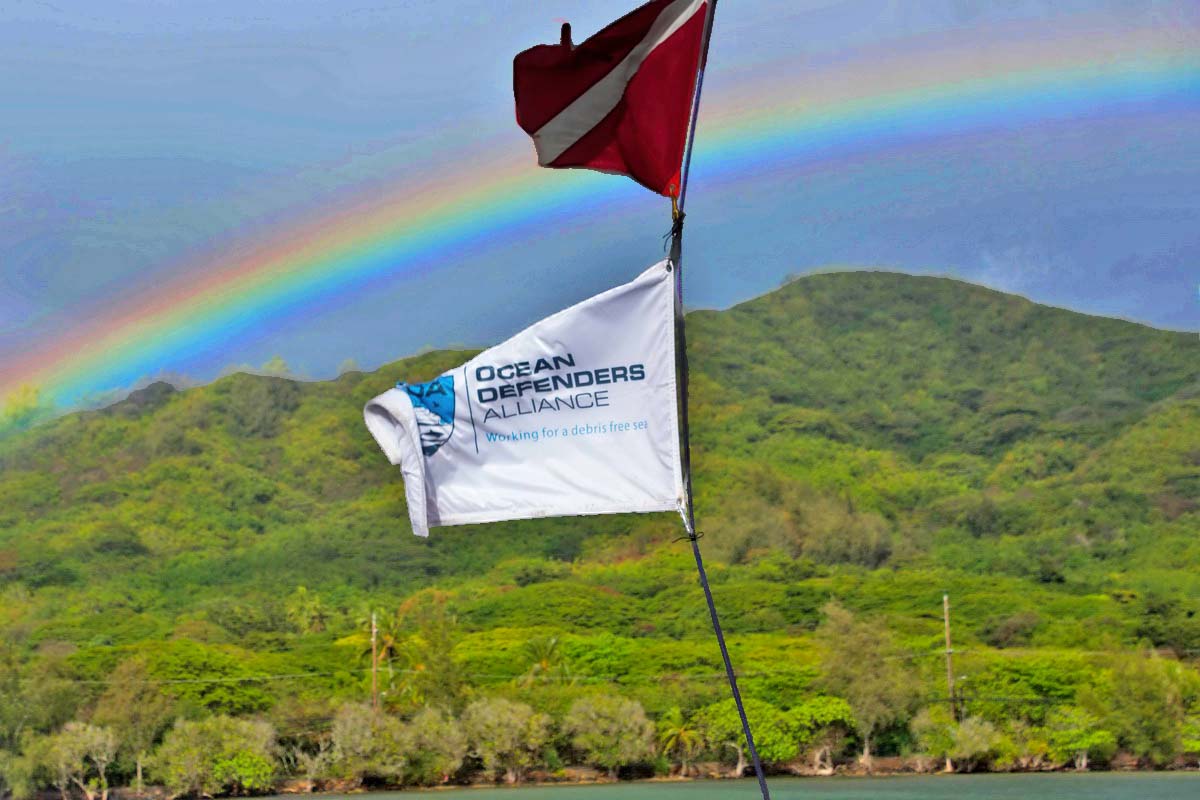 I arrived a little after 7am, and there were already lots of people there.  We set up a pop-up tent, put a table under it, and within minutes we were ready to get things rolling.

Glenn rounded everyone up and gave a short presentation to the 25 volunteers. He explained how the dive teams would work and assigned some to an area with fishing lines and a bigger group to the tires.

He then handed it over to me. I shared a short history of ODA and then oriented people as to what we expected them to see down there, how to attach lines to the items, and how to signal the topside crew to haul up whatever they had attached to the end of their line.

Glenn and Ken, plus a couple of other volunteers, had jumped in the water the week before with their snorkeling gear to get a sense of what was down there.  Pretty much the same thing we see in other harbors: lots of toxic, rubber automobile tires. 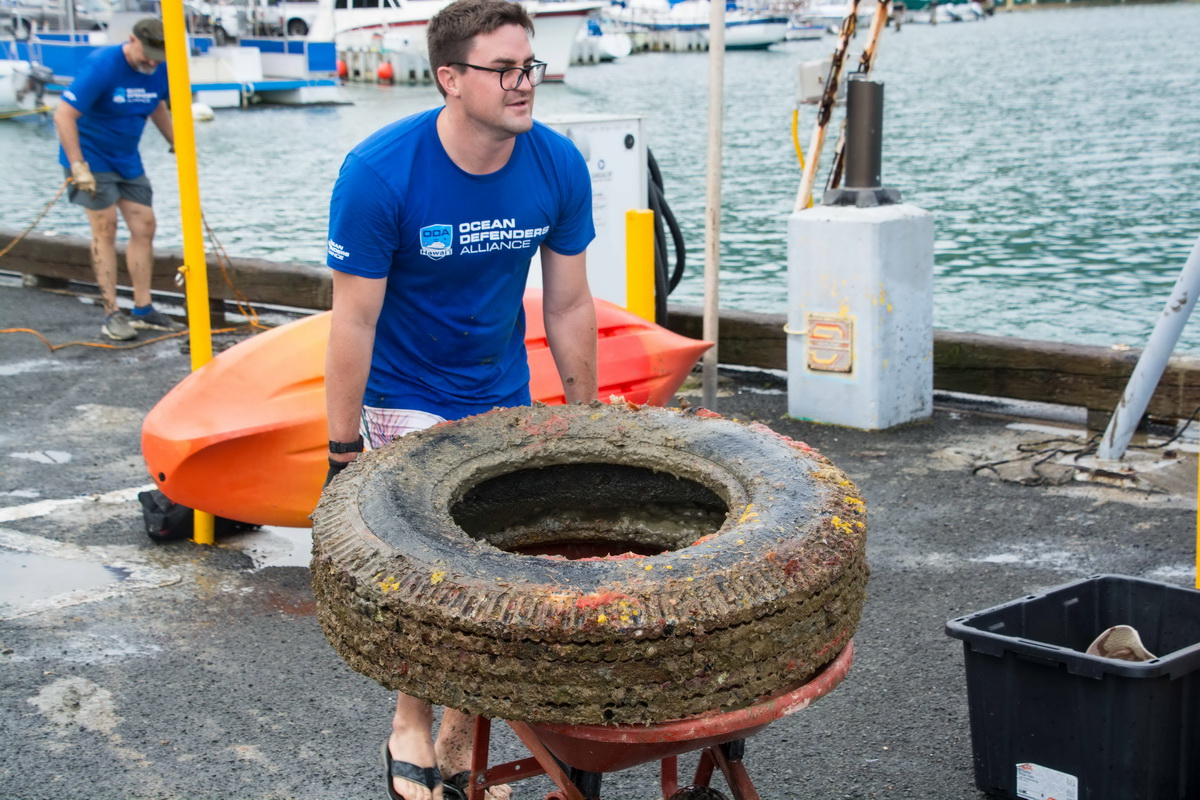 What is With All the Tires?!

Here in Hawaii, instead of using “fenders” – the kind you buy at a boat supply store – they use old tires.  In order to prevent damage to boat hulls when the wind and waves push the boats against the docks, people tie the tires to the sides of the docks with rope lines.

Over time, the lines they use to secure the tires fail.  They fail from wear and tear, degrading over time.  Once the lines break, the tires fall to the bottom never to see the light of day again.

These tires then get tossed around when the big waves come in and get moved all over the place.  They frequently smash into corals that are scattered along the bottom.

In addition to the tires wreaking havoc on the bottom life, they are made out of over 100 chemicals.  The tires leach those chemicals into the water over time and they’re toxic to most of the animals that reside there.  Rarely do you see anything other than moss growing on a tire.

With that in mind, the divers headed to the bottom to start removing all they could find. 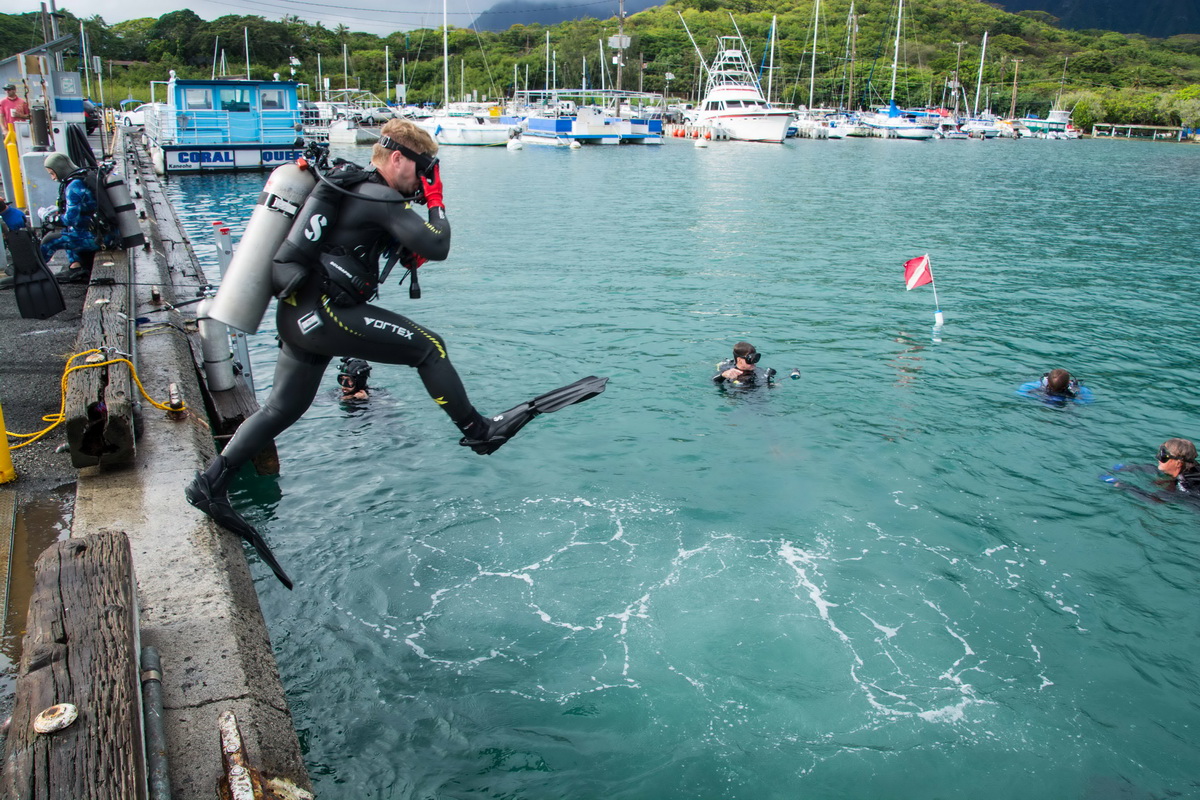 Even though the waters are very shallow here, about 15 feet, UW vis was so bad that you couldn’t see them at all once they dropped down.  Ken took his camera down there and said the vis was less than 5 feet…

You’ll be able to see from his pictures that we’re posting tomorrow, the bottom is covered in mold, with some patches of corals interspersed.

Two minutes after the first dive team descended we had a tire being hauled out.  It was non-stop for the next hour.  It was nuts.  Tire after tire after tire.  Until we just had to call it quits because we didn’t have the ability to haul any more in our trucks.

Nobody ended their dive because they ran out of air supply.  We had to tell them to stop pulling anymore tires because there was nowhere to put them…

As the divers got back on the docks and we took all the group pictures with our “Catch of the Day,” everyone pitched in to get the tires onto three pickup trucks that would haul the catch off to the garbage disposal facilities.

It was then that I got to talk to the majority of people who volunteered this day.  I knew a handful from past adventures, but the majority were new to me.

I heard stories of how many more tires were down there. About 50 feet off the end of the main dock, the bottom starts to slope down to about 40 feet deep.  At the bottom is a kind of canyon.  Several people saw a massive pile of tires there.  50 or more…

Another diver told me about dozens of tires under one of the pontoon boats that is used as a dive boat.

Even in the areas that the majority of the team worked in, dozens of tires were still there, waiting to be plucked out. There are also several thousand feet of fishing lines criss-crossing the area.

Here are most of the volunteers with the "Catch of the Day" - which not only included all those tires but also fishing line and poles, ropes, and random items like a mud-covered lounge chair! 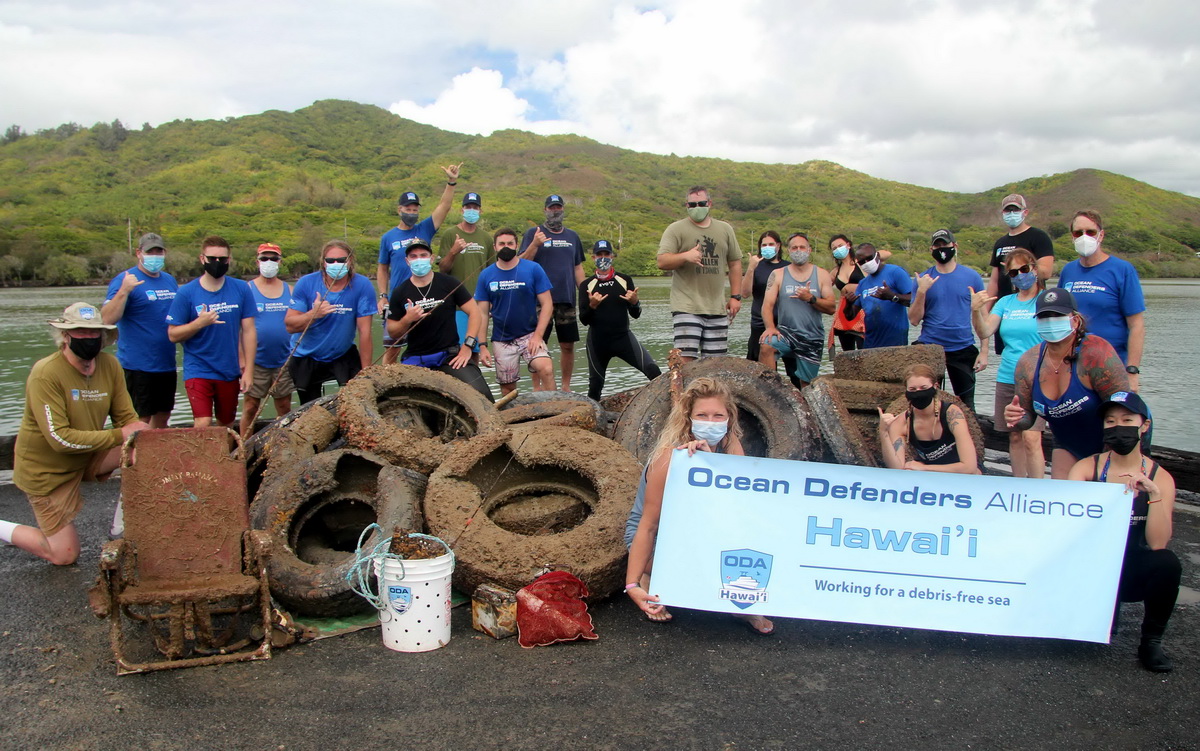 We’ll be performing cleanups hear every other month until we get the job done. I estimate it will take approximately two years.

A big Mahalo to everyone, but especially…

Glenn Roberts.  Glenn really was the Master of Ceremonies.  He organized all the divers, made sure they knew what gear to bring and what to expect when they got in the water.  He and Ken were also in constant contact with Tanya Borabora (the Harbor Master) for the three weeks leading up to the event.  Outstanding job, Glenn! 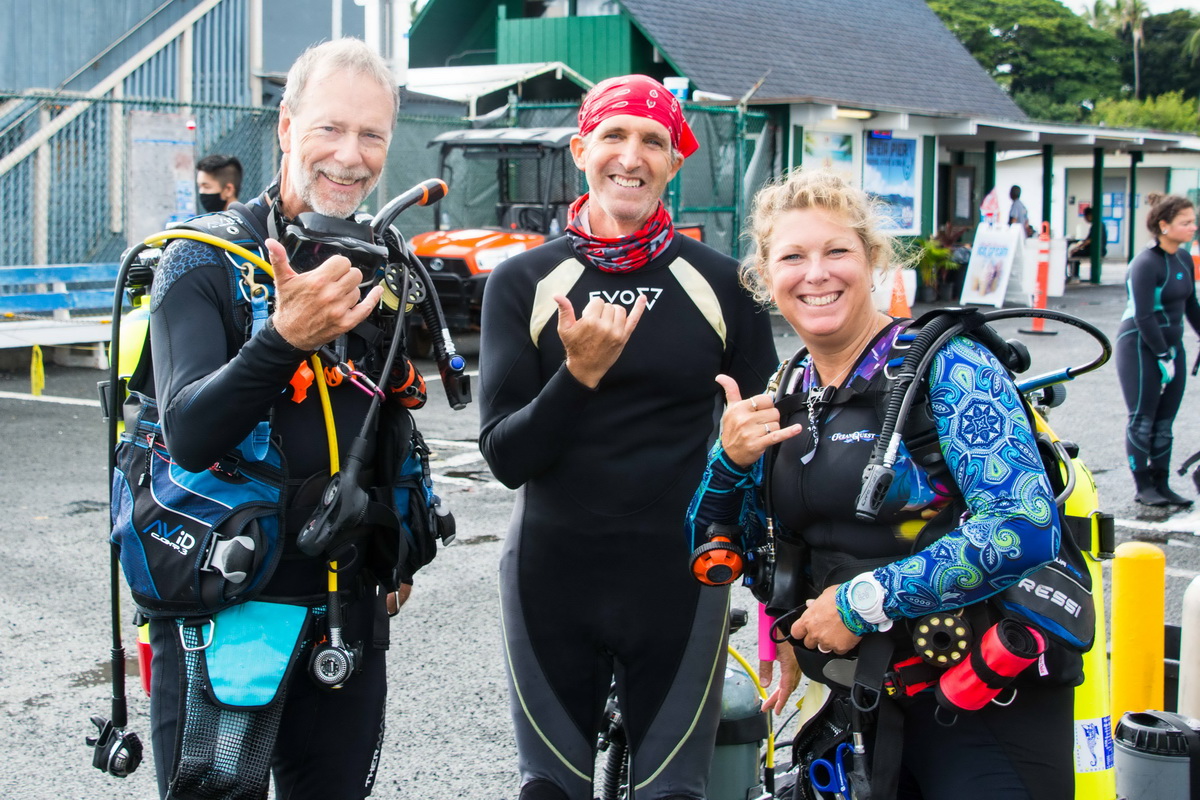 Another person was hugely helpful in getting someone to take these tires for disposal.  Disposing of tires is a filthy, toxic business.  Very few companies have developed the infrastructure to handle tires.  It becomes even more difficult when you’re on an island.

I’ve had the pleasure of working with Allison Keith for many years now.  She works for a company on the Big Island that handles the disposal of waste on that island.  So naturally I turned to her to see if she knew anyone on Oahu who could handle our marine debris.  No, she didn’t, but she took on the project of finding out who could.

No easy task, and even though she started on the project four weeks ago, we were still working out the details the day of the event!  In the end she and her husband, Barry Keith, got it all worked out and we dropped the tires off with an energy company that created electricity from the heat that’s generated when they burn the tires.

Nice going, Allison and Barry!  I have a feeling they will think twice about taking my calls in the future.  ;-)

Another guy stepped up to the plate, big time: Ed Sissino!

Ed has been doing these UW cleanups for years now, and always adds some new mechanical device to make things go smoother when handling debris or even getting divers in and out of the water safely.  This time Ed rigged up a ladder that allowed the divers to climb out of the water at days end.  He also hauled out several of the tires on his time underwater.

So many people had a hand in the success of this event. I’ll keep going!

Thank you to Anke Roberts for helping set up the tables and tent.  But especially for taking most of these pictures.

Rose Zhang, we greatly appreciate your work in getting all the pictures and video footage to the media outlets in time for their deadlines.

Ray Goody, mahalo for going the extra mile (literally) by offering to use his pickup truck and haul the tires 30 miles away, to the energy company.

Finally, thanks to Tanya Borabora.  Tanya loves the ocean, is a native Hawaiian, and was thrilled to see ODA adopt her harbor.  She even pitched in the day of the event and was all over the docks smiling and hauling tires around like they were tricycle wheels. See her photo at the top of the article!!

We are grateful to you, Tanya, and we all look forward to the next haul out…doing vital ocean cleanup work together.

Stay tuned everybody, and we’ll let you know when we have that end of the year tire sale to beat ALL tires sales… Buy one, get four free!! 🤣

If you’re inspired by these hardy souls, feel free to send an email to us and let you know how you’d like to be involved. We’d love to hear from you!