After several months of really bad sea conditions here in California, we finally caught a break in the weather…or did we?

For the last three weeks we’ve been hampered by big waves and stirred up waters here in Ventura County.  We even had a couple of inches of rain pound us last weekend.  So much so that when I drove along the coast last week, the water was a putrid looking brown for at least a mile off the coast. 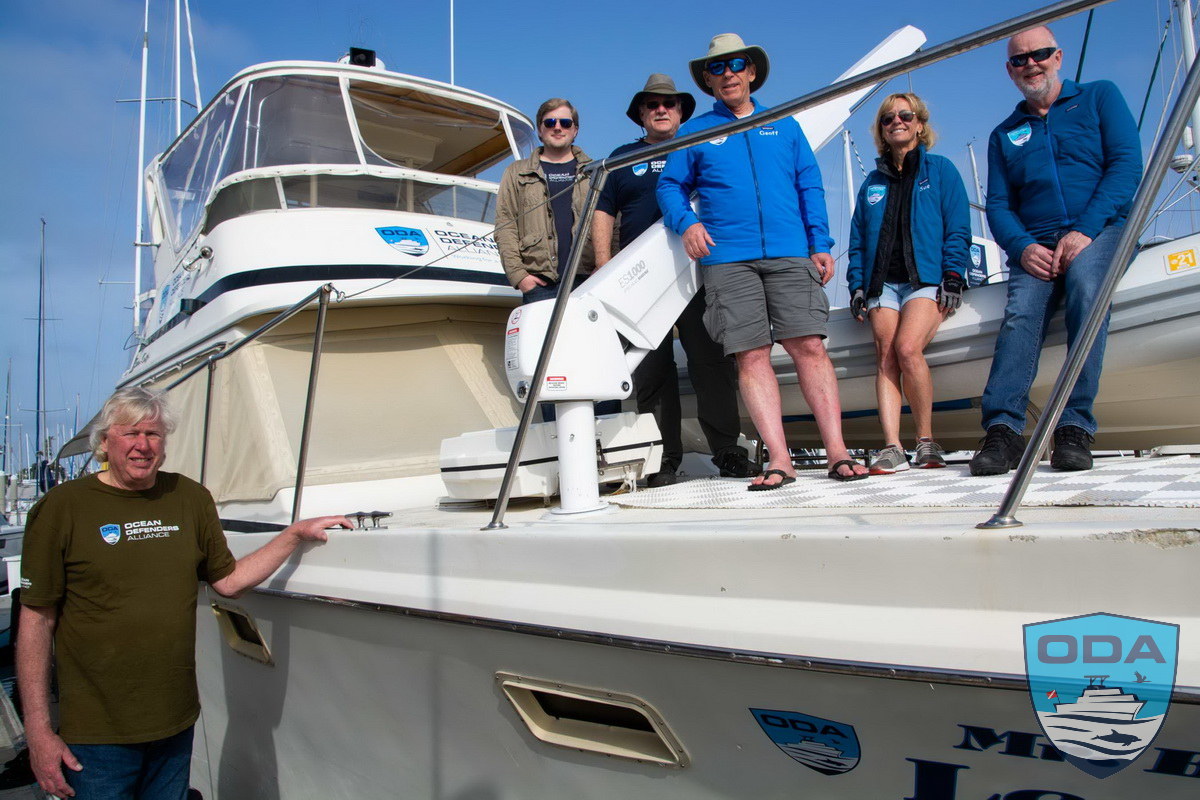 Then things finally started calming down earlier last week.  We’ve been itching to get out for a long time now, so a small group of us got together and headed out to look for abandoned lobster traps.  So, Sunday, April 3rd, we took off from the Channel Islands Harbor.

The divers were: Erich Fertschneider, Geoff Walsh, and Mike Wynd.  Helping out as our deck crew were: Sue St. Sure and Angus Yates.  This was Angus’ first time out with us, so we told him we’d take it easy on him and let him kind of ease into the program.  Hah! 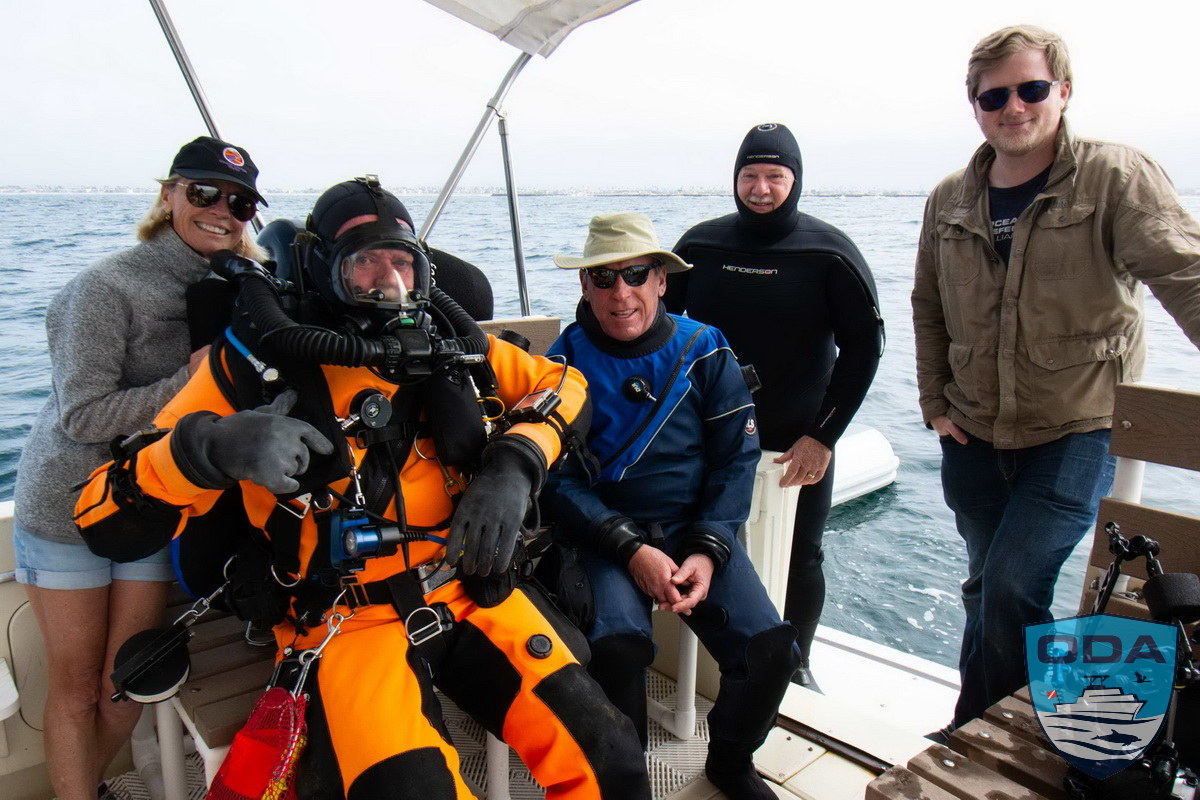 As we headed out to the Channel Islands Harbor breakwall, where we intended to dive first, the waves were pounding on the rocks… so much so that we could see the waves crashing OVER the breakwall.  Not good, so we went to Plan B.

We went a couple of miles offshore to a spot where we had seen a couple of dozen traps set during the legal lobster hunting season.  That season ended on March 16th.  So, according to law, all the traps had to be out of the water by then. This is when ODA kicks into high gear, knowing that the fishermen lose between 10-30% of their traps every year.

Once we got to the site, Mike crawled into his dive gear and headed down the anchor line first.  Erich and Geoff jumped in 10 minutes later. 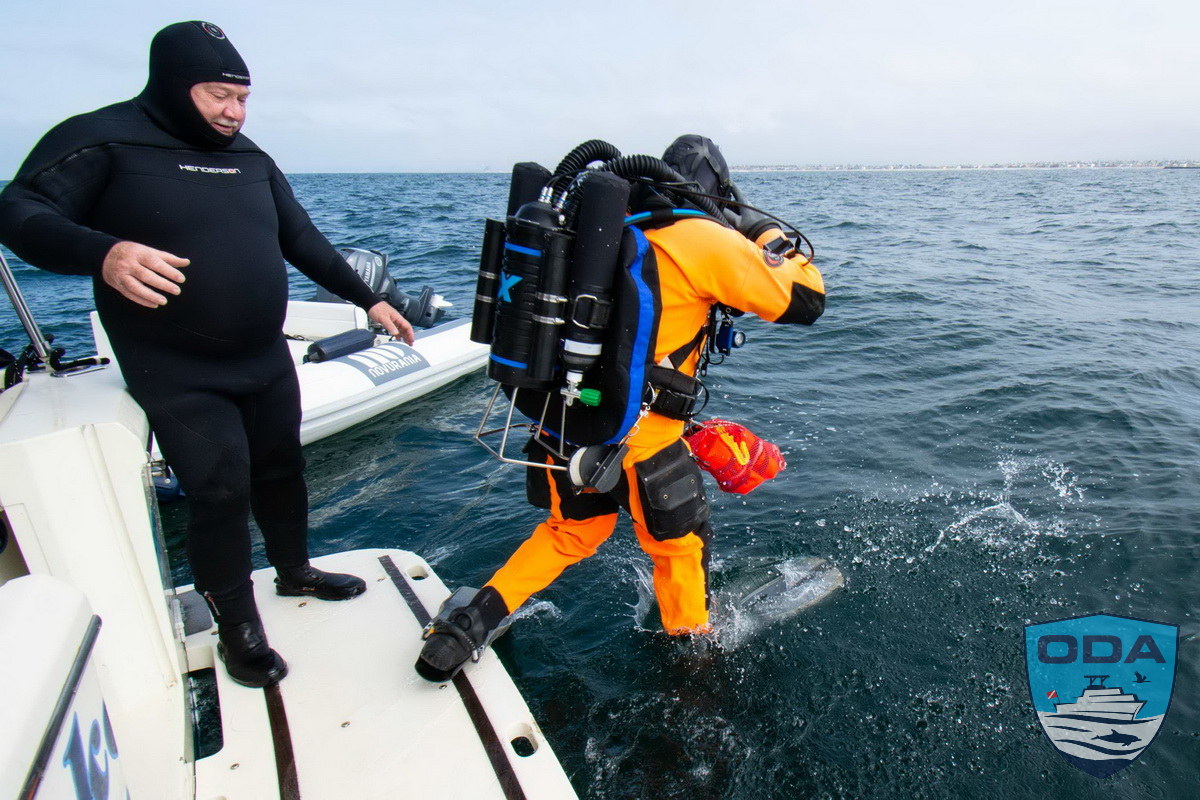 They were down quite a long time before we saw anything happening and assumed that they hadn’t found anything.  Then after about 30 minutes Sue spotted two lift bags at the surface, a good 200 feet away from us.  Sue and Angus jumped in the RIB (rigid inflatable boat) and motored over to the bags, then hooked a tow line up to them and dragged them over to me on the boat. 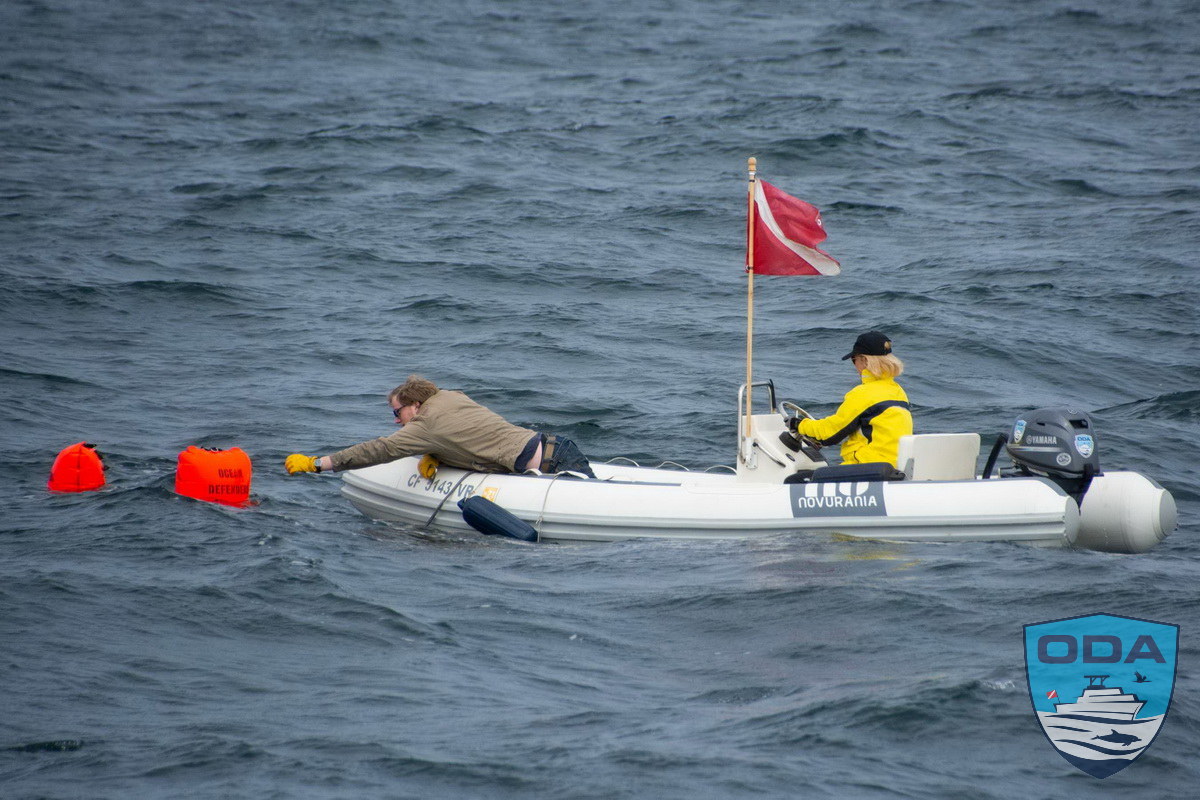 Angus, Sue, and I spent the next 15 minutes trying to get the trap hooked up to the davit (crane) and then hoisted it onto the front deck, all while the waves were tossing both boats all over the place.  Angus was finding out what a trick it can be to get a trap out of the water and onto the boat. 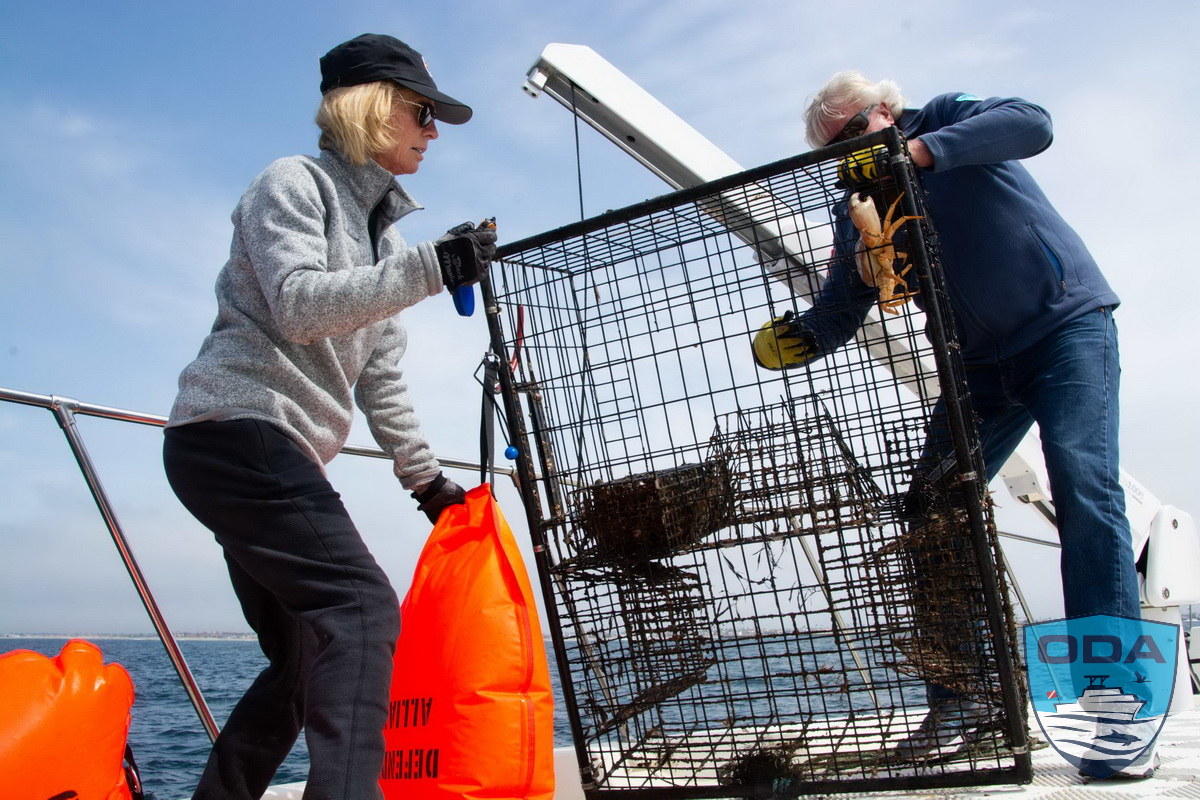 Once we got it on the deck, I saw that there were several animals in it.  Cool!  Turned out to be six lobsters and one rock crab, all patiently waiting for their second chance at life. You can see in the photo below that there were originally TWO crabs, but the small one obviously fell out of the trap on the way up because he wasn't there when it got to the surface! 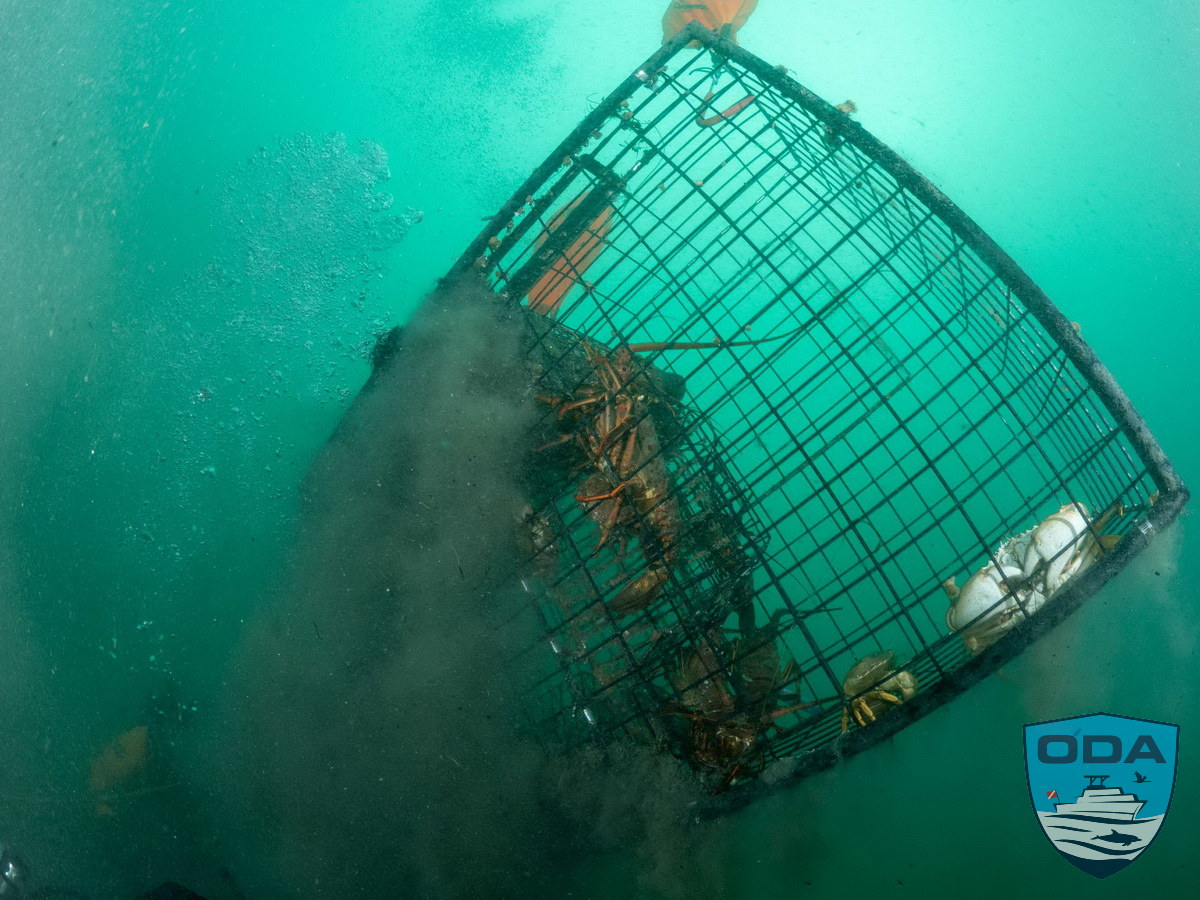 By this time Angus and Sue were back on our boat Mr. Barker’s LegaSea and helped get all the critters out of the trap and back in their natural home, (after we took a few pictures to document the happy moment). 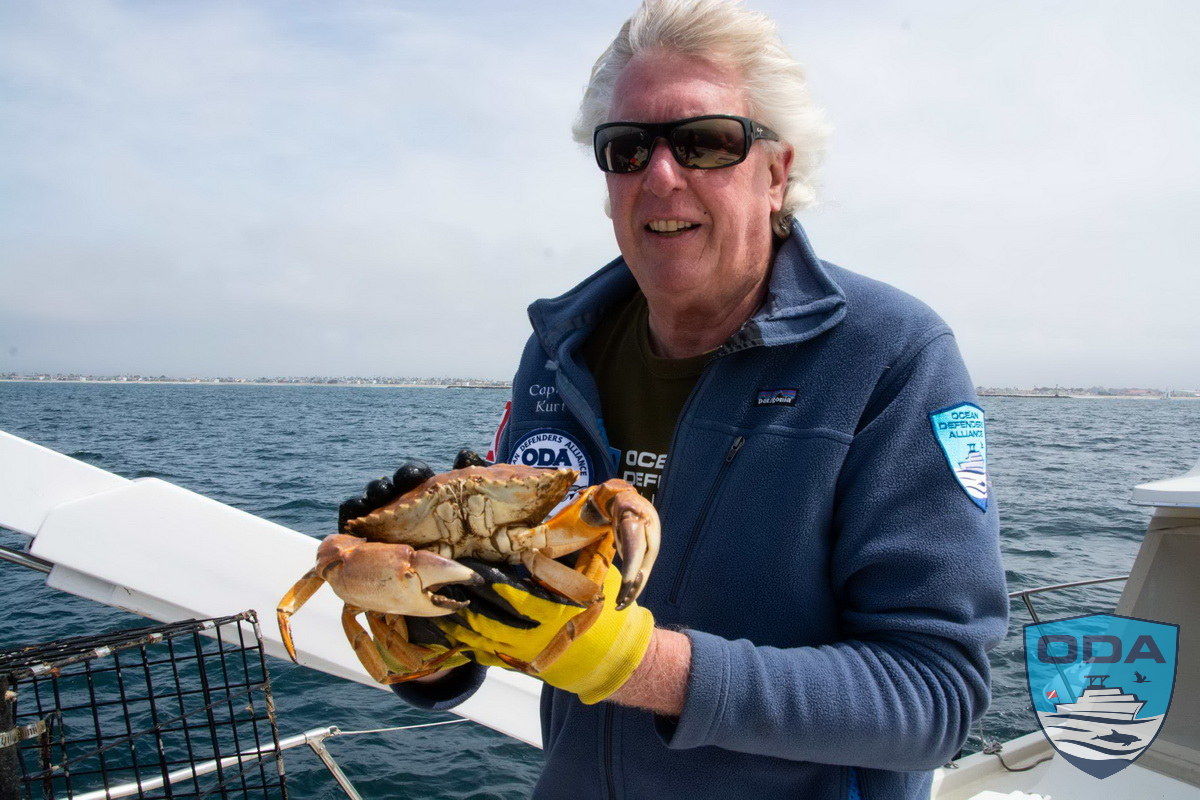 As we were securing the trap on the deck, Erich, Geoff, and Mike climbed back aboard the boat and were telling us about their ordeal underwater.

Turns out the visibility was horrible, at about five feet.  And the surge was tossing them around like rag dolls in a hurricane.  Erich managed to get a few pictures of the action, which as you can see, was very trying with so much gunk in the water. 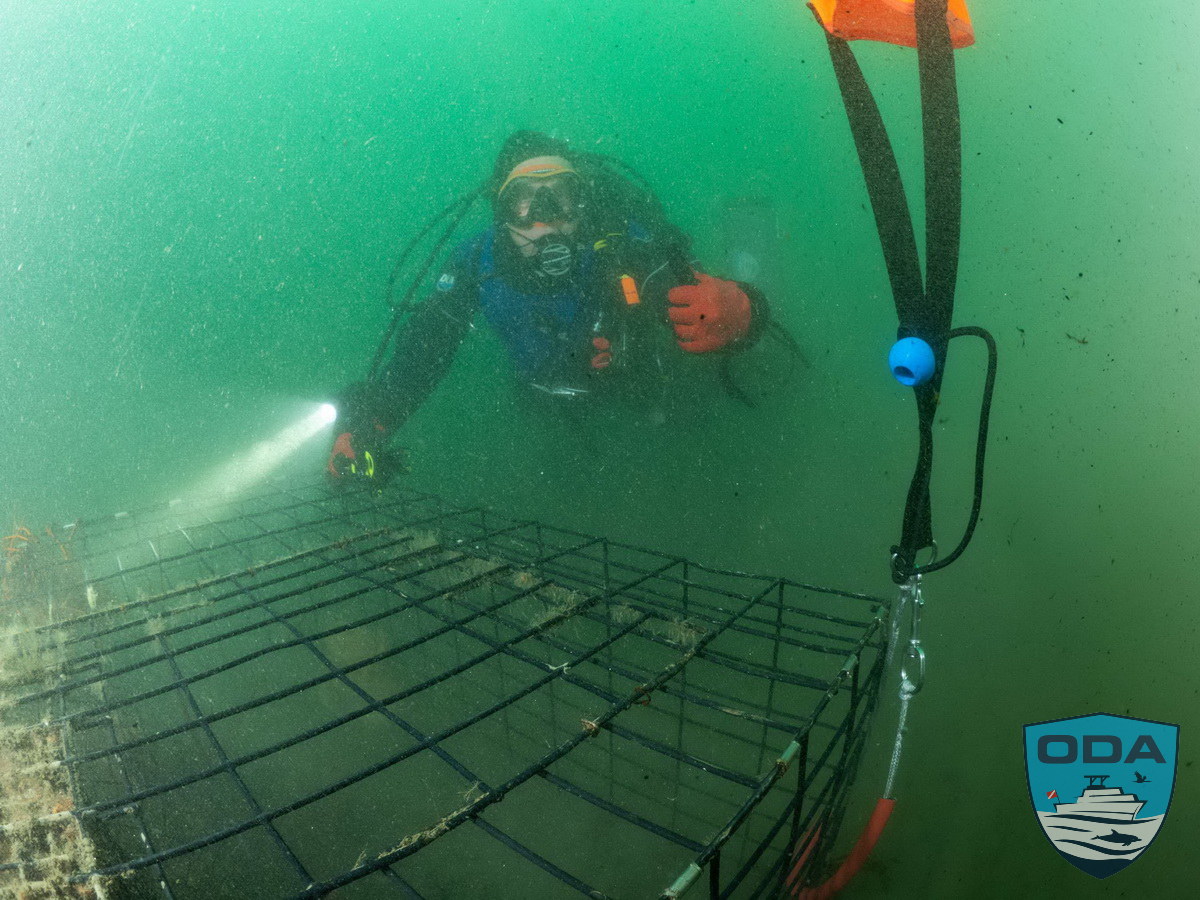 We then decided to call it a day and come back for more action at a later date.  Mike had seen at least two other traps that we could remove, and there are probably more.

Even though we didn’t get to put in another dive, it was still a very rewarding day.  I’m sure those lobsters and rock crab would agree!

Thank you to all of our donor-partners who, from shore, help us get out to sea to clean the waters and save lives!