More Than Meets the Eye

I realize it's been since April that I've reported on our marine debris removal outings in California. The weather hasn’t been kind to us; the waves and bad underwater visibility has barred us from doing our favorite thing to do – cleaning the oceans to save wildlife and their habitats!

In addition to all the good ocean cleaup working going on with ODA-Hawai'i, there's still a lot I can tell you about that's happening in Southern California...

On Wednesday, April 20th, I gave a presentation to the staff at Rivian.  This is the startup company that’s making pickup trucks for the EV (electric vehicle) market.  Pamela Henricksen has been a volunteer with ODA in the past and now works at Rivian as their Environmental Health and Safety leader.  She coordinated the invitation for my presentation which allowed me visit their facility in Irvine to speak directly to some of the staff, as well as others who joined in via Zoom. 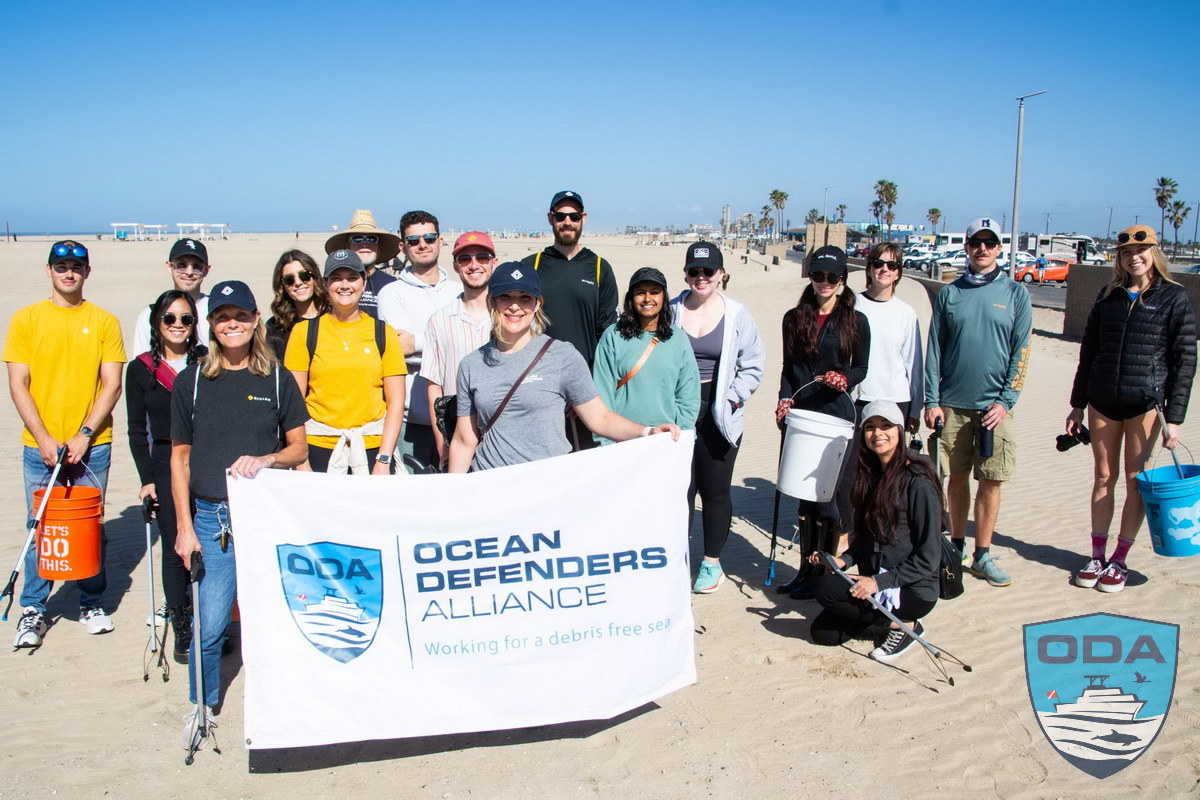 Three days later, Saturday April 23rd, 27 people from Rivian helped celebrate Earth Day by doing a beach cleanup at Huntington Beach State Park!  It was a beautiful day to be at the beach, and all those people scoured the beach and creek channel pulling out plastics from the sand and water. I have photos of some of them, but not all together. Please check out the photo gallery below to see more of these fantastic ocean defenders! 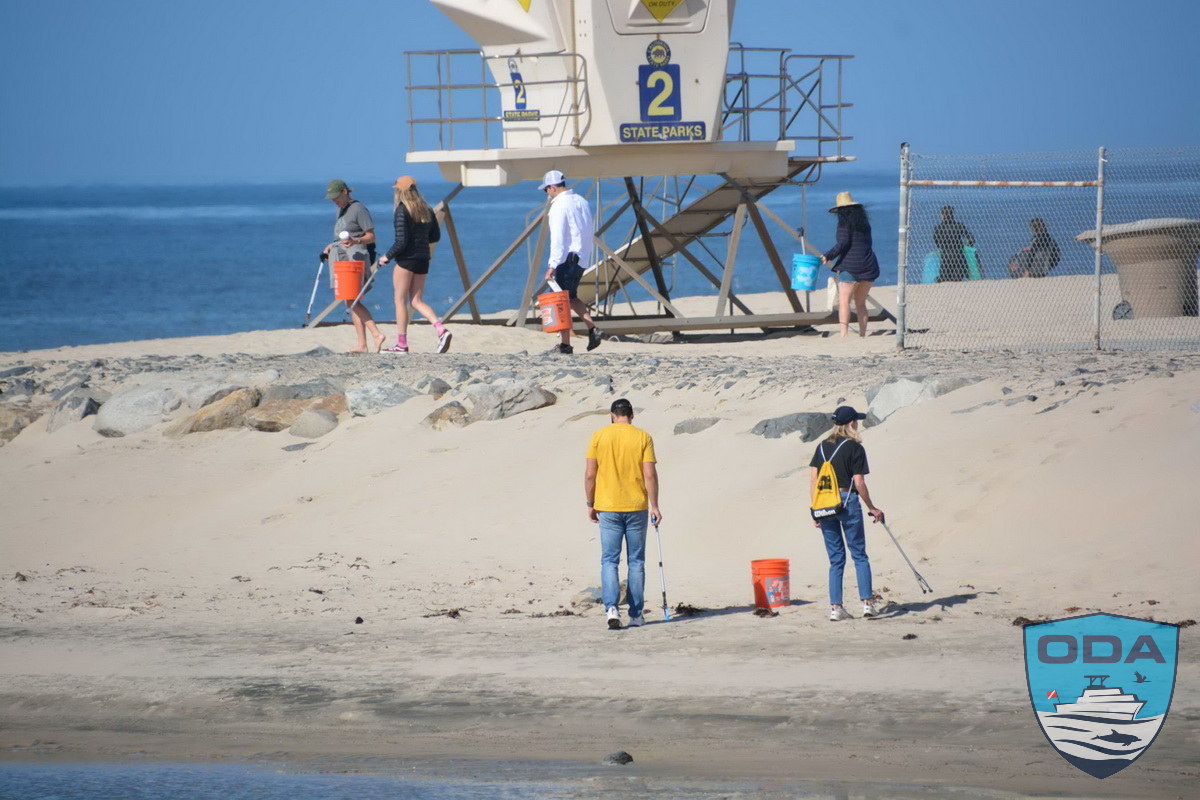 The area we worked on was right next to a nesting area for the endangered California least tern.  The area for these birds has been fenced off to keep predators from killing the birds and to keep people and their dogs from harassing the animals. 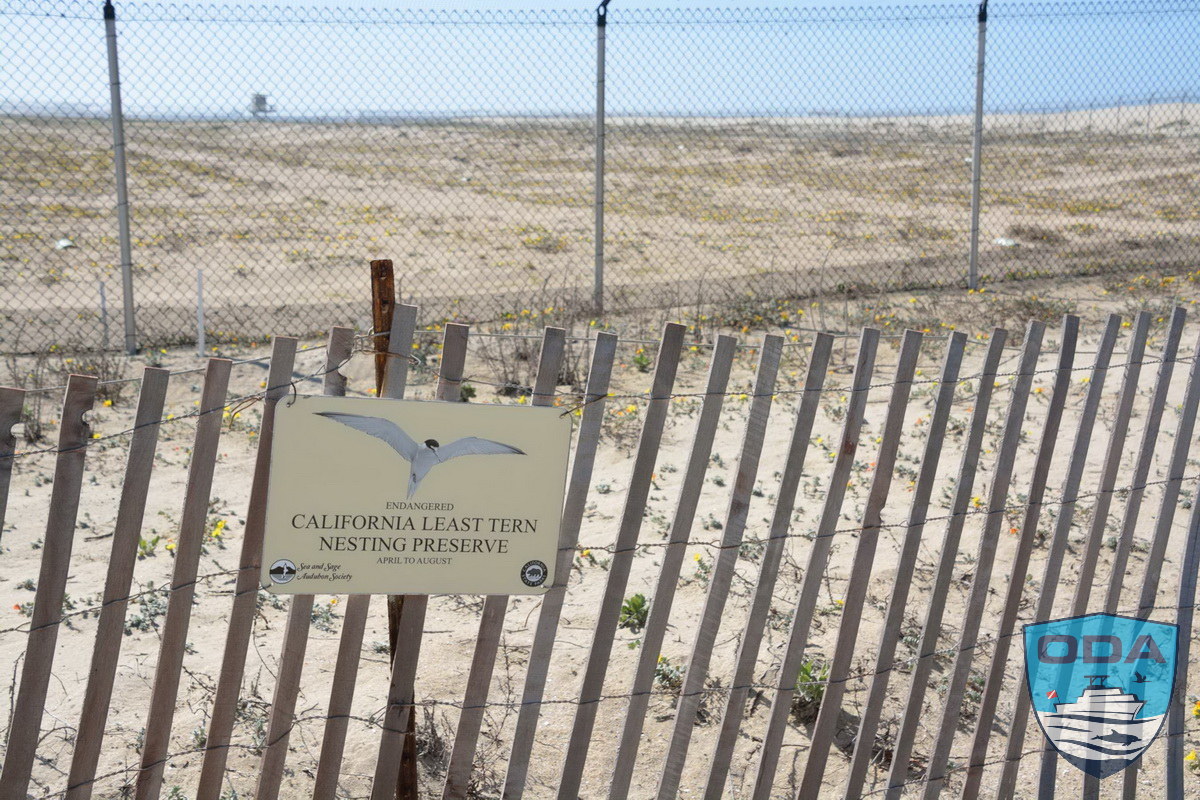 Knowing that a lot of discarded plastics become airborne by the winds, it felt good to know that the wrappers and Styrofoam we removed won’t get into that area where the chicks have been known to ingest that toxic stuff mistaking it for food.

It was a wonderful turnout with the Rivian folks, and several people asked me if we could do this annually.  You betcha!

On May 1st, despite the weather report, a group of us boarded our boat Mr. Barker’s LegaSea and headed out of the Channel Islands Harbor to remove traps from an area we had seen sometime in April, but we had to call off the removal activity due to deteriorating dive conditions. 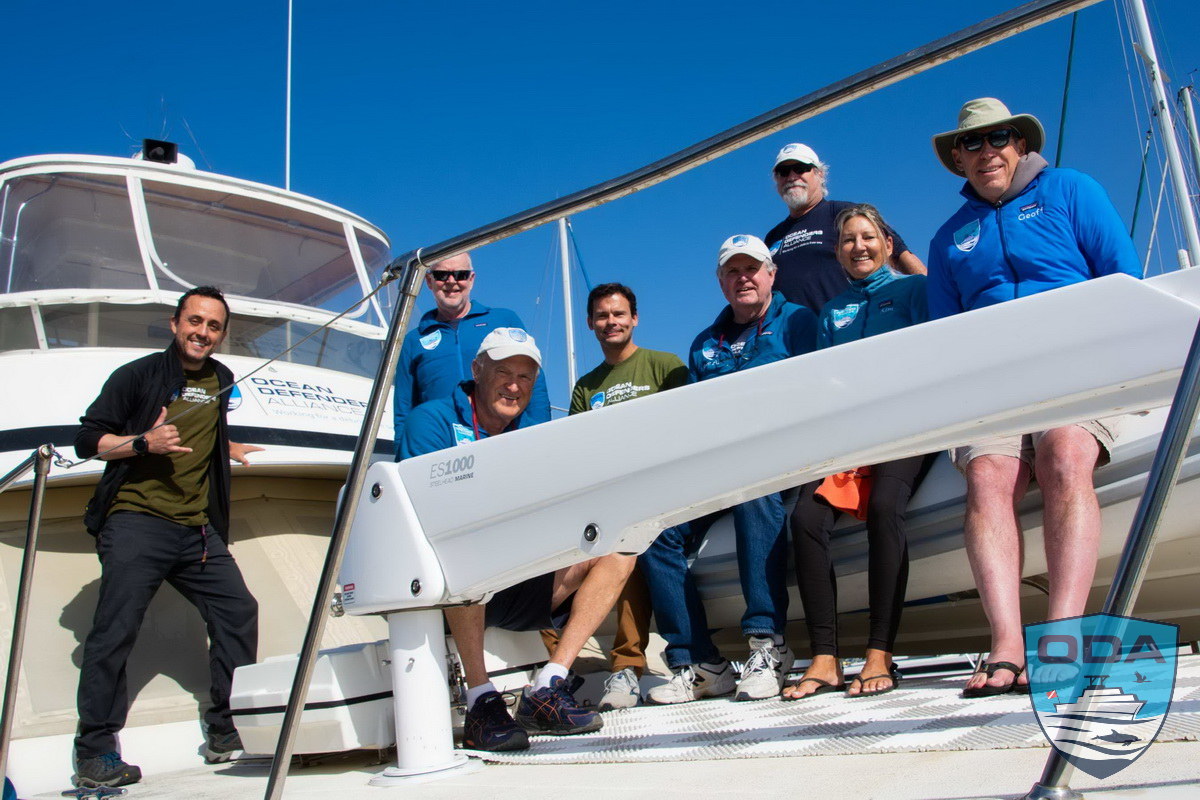 As soon as the boat reached the breakwall, we could see waves crashing over the wall.  No way were we going to be able to dive.  Turned around and vowed to try another day…  The only good thing that came out of it was we got to try our new drone for the first time.  So, not a complete loss, in fact it is pretty exciting!

Check it out (sorry no audio this time):

Since then, we’ve tried two more times to get out, but have been thwarted by strong winds and high seas.  Seven-to-nine-foot waves to be exact.

Several months ago, I was approached by a Master’s student at the University of California, Santa Barbara.  Christina Robinson is a student there who got together with her professor to see if the university might be interested in working with ODA on a Master’s thesis project that would help ODA with our public relations and get the students credit for their efforts.

We’ve had a couple of Zooms calls to discuss the prospect and the school administrators thought it would be a viable project for their Master’s thesis.  ODA has agreed to put up small amount of funding for an internship for one of the students.  There are six students who will be involved with this project, which is tentatively called: The Deadliest Bycatch. 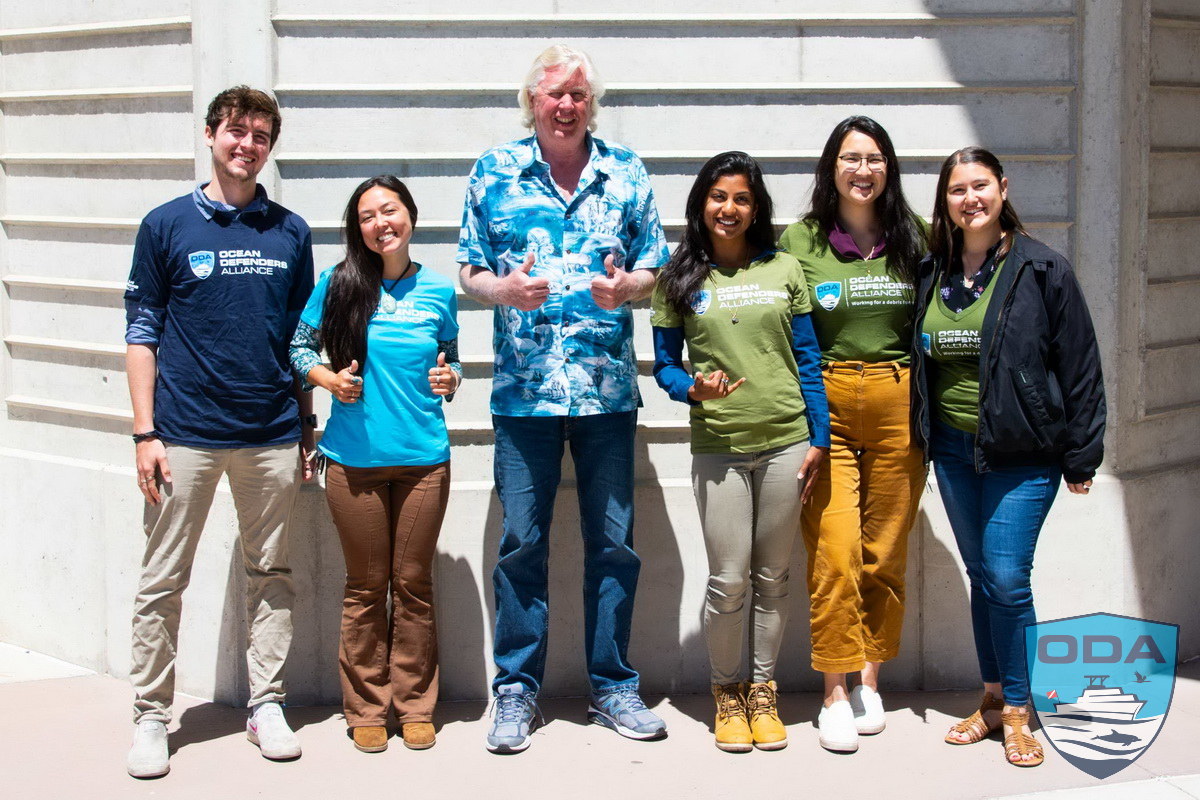 In addition to Christina, the students are: Yutian Fang, Sarah Lam, Logan Ossentjuk, Meghna Rao, and Abigail Sanford.  Their professor is Steve Gaines.

I finally got to meet most of them in person when we had a meeting on campus on May 11th.  I can tell by the interest and enthusiasm that these students are going to be a huge part of ODA’s effort to inform not just the general public, but young people in particular, about all ODA is doing to protect the underwater world of California and Hawai’i.

All six of these students already filled out their crew applications, and two of them actually got scuba certified with Rescue Diver certs that will allow them to dive with us.  Talk about motivated!!

I get asked all the time: What do you do with the abandoned traps after you haul them out?  Much to the consternation of just about everybody, if the traps are still good enough to use, I give them back to the fishermen.

I’ve been doing that with the hope that maybe the fishermen will then start telling me where they lose their traps and give me the GPS numbers so we can go remove them.

Our goal is not to put these fishermen out of business.  Our goal is to save animals.  Some (lobsters, crabs, and fish) die of slow starvation when they can’t get out of the traps, and some (like whales, dolphins and turtles) die when they get entangled by the lines that are attached to the traps.  We want to stop that suffering. 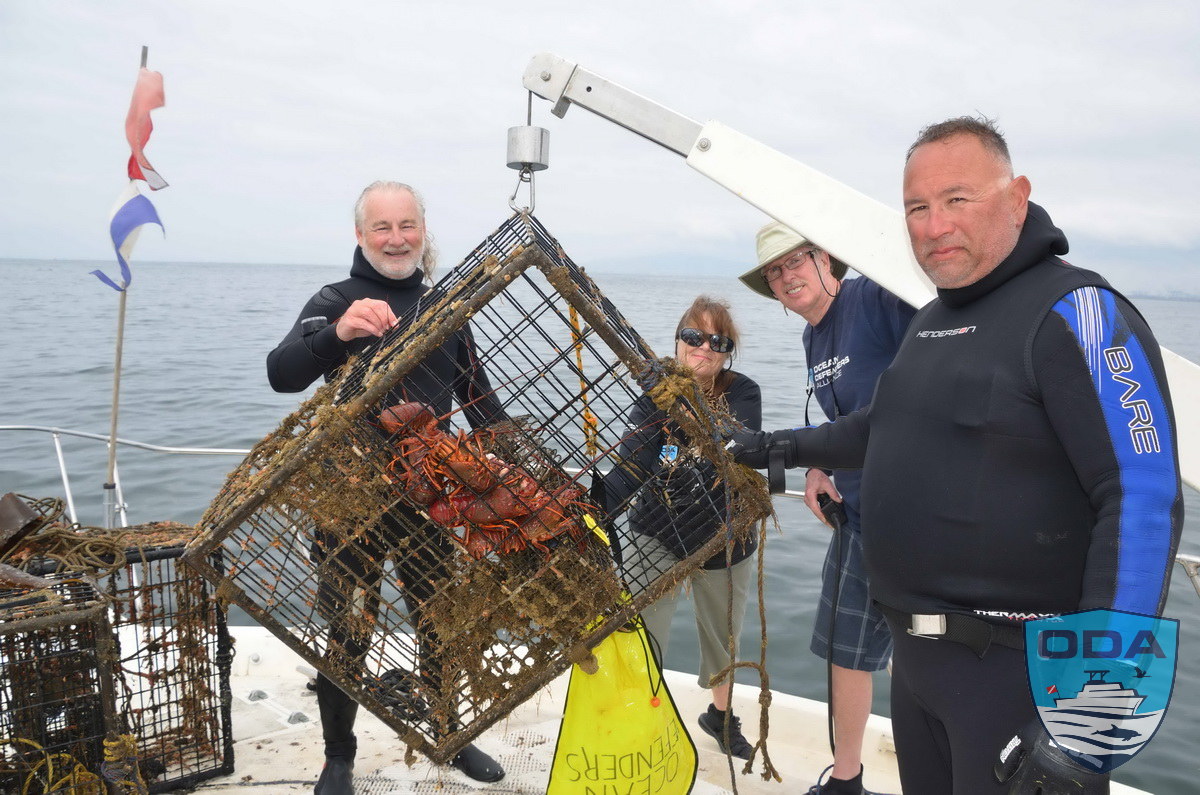 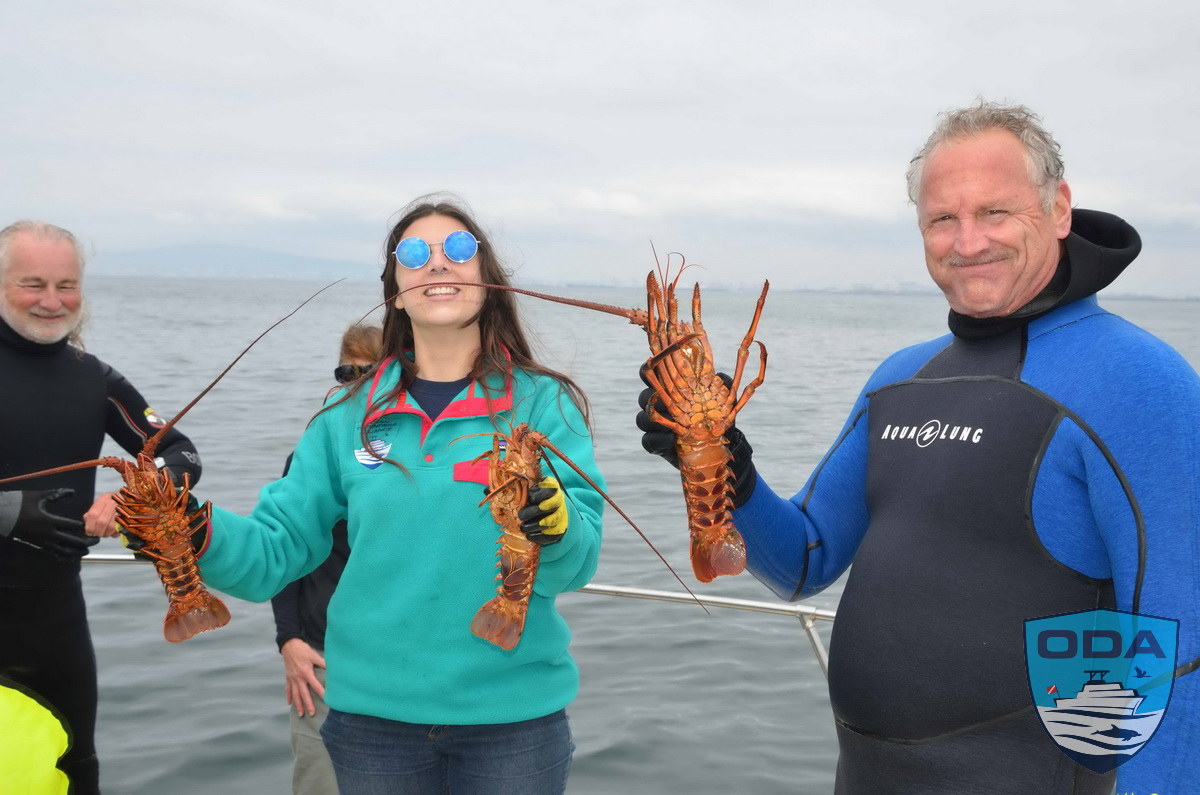 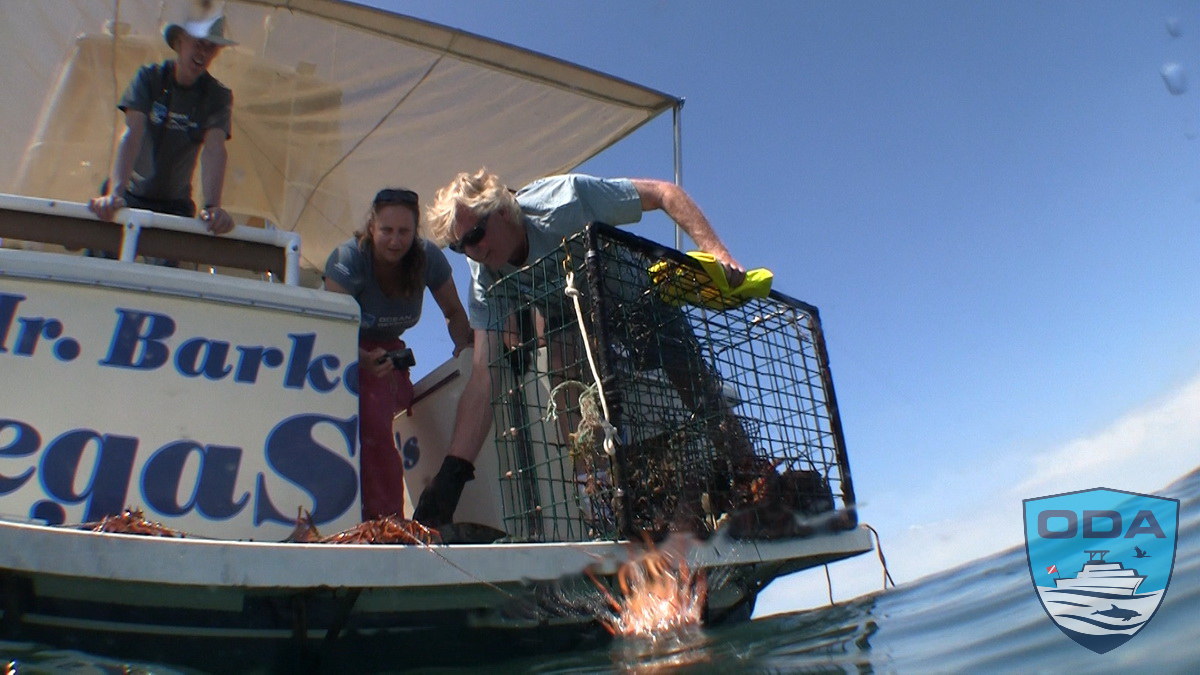 Be sure to enlarge this picture to see the lobster trap on rear deck to more easily release trapped lobsters; see one splashing in!

Within the last month, three different lobster fishermen called me to tell me where they have been losing their traps.  One guy offered to take us out on his boat to remove them.  Another guy gave me the GPS numbers to 13 different locations around Ventura and Malibu.  Thirteen locations!  We’re going to have a busy summer.

Now, if the oceans would just calm down long enough for us to get out of the dang harbor…

From where you are now, you can be part of this busy summer removing traps and other marine debris! Please help cover fuel and other supplies necessary for ocean cleanup operations - thank you!