UPDATE: See video of our crew telling their story! Scroll to the bottom...

Southern California was hit by a double whammy recently: Our first significant rain of the season, followed by a fierce Santa Ana wind two weeks later.  Those winds brought 60-70 mile-per-hour winds to our coastal areas, and even higher in the mountains and hills. 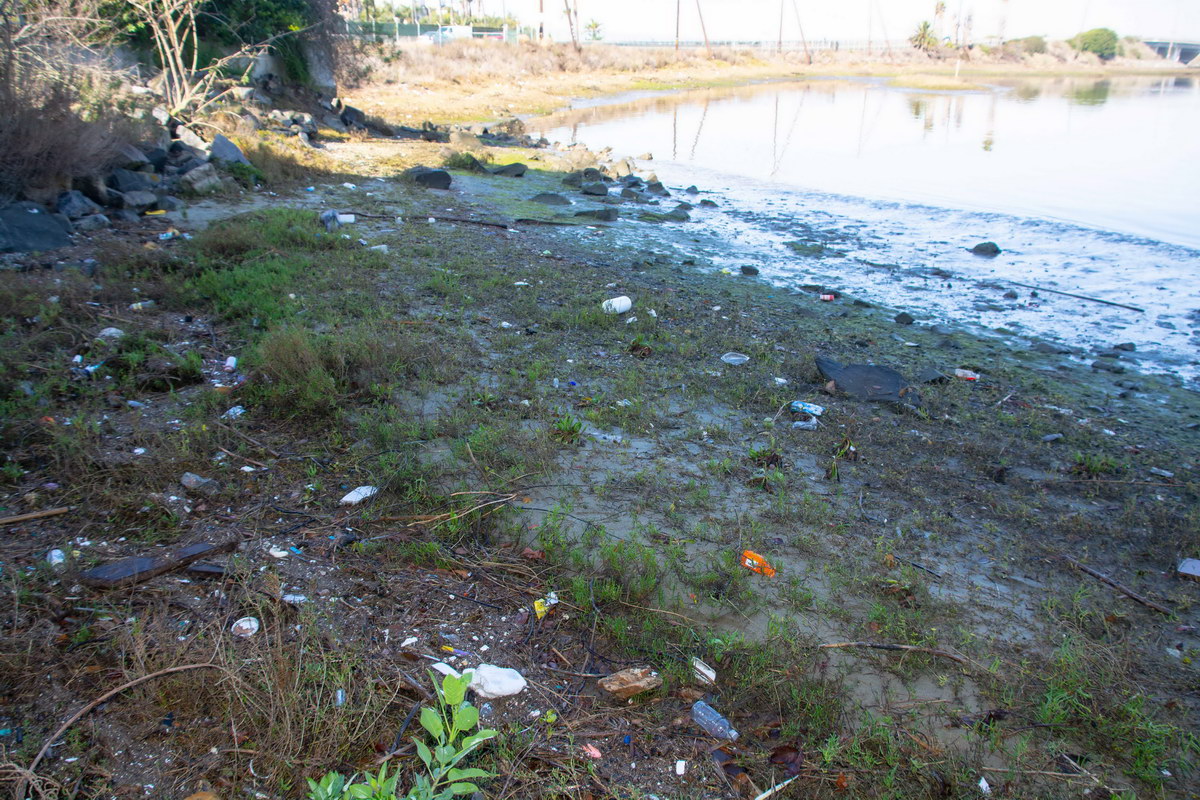 All the trash that’s been accumulating along our streets, highways, and drainage canals only had one way to go…downhill towards the ocean.

Knowing this, I contacted longtime ODA supporter and volunteer Darlene Summers who lives in Huntington Harbor, and asked her to see what it looked like in the harbor.  She quickly responded that it was bad.  The City of Huntington Beach has a kind of barrier erected across the mouth of a culvert that’s supposed to stop the trash that floats in the water from entering the harbor.  But just like clockwork, every year, the barrier breaks when it can’t handle all the weight of the trash.

Then all the built-up debris flows uninterrupted into the harbor and then out to sea.

That would be bad enough, but as it makes its way to the ocean it courses through the Seal Beach National Wildlife Refuge (SBNWR).  There are hundreds of acres of tidal salt marshes here that wildlife thrives in, which is much easier to do when it’s not polluted.  Migrating birds stop here, rest and feed on their way to and from Alaska and South America.

Not wanting all this litter to hit the ocean, I asked a few volunteers if they wanted to spend their Sunday and go remove what we could.  A total of 8 of us showed up on January 24th.

After spending so many months cooped up in our houses and apartments, we decided to meet up, keep socially distanced, and put in some effort to help stem the tide of plastics. 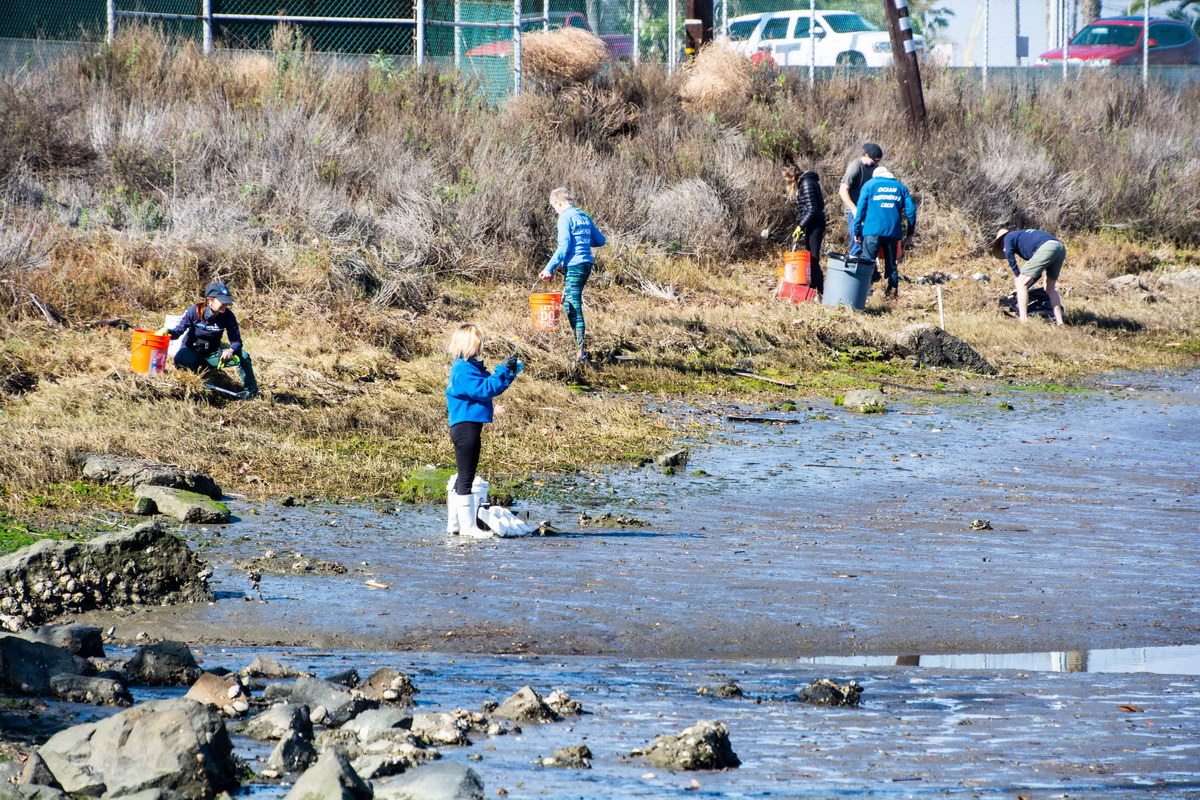 We timed our cleanup to coincide with an outgoing tide.  This site has a narrow strip of land at high tide and we wanted to make sure we didn’t have to squeeze by each other while we picked up the trash.  So, we met at 10am and got to work.

This site is on the border to the SBNWR and it was disheartening to see so much plastic right where these migrating birds were trying to feed.  The worst of the problem is the debris created by Styrofoam.  This is used in packaging for food containers and for shipping.  Once in the open environment it breaks down into smaller and smaller pieces, until they look exactly like fish eggs which unsuspecting birds ingest.

Those little round balls not only offer no nutritional value to the fish and birds but are actually even more toxic than you’d think due to all the oil residue, pesticides, and pollutants that get attached to the Styrofoam. 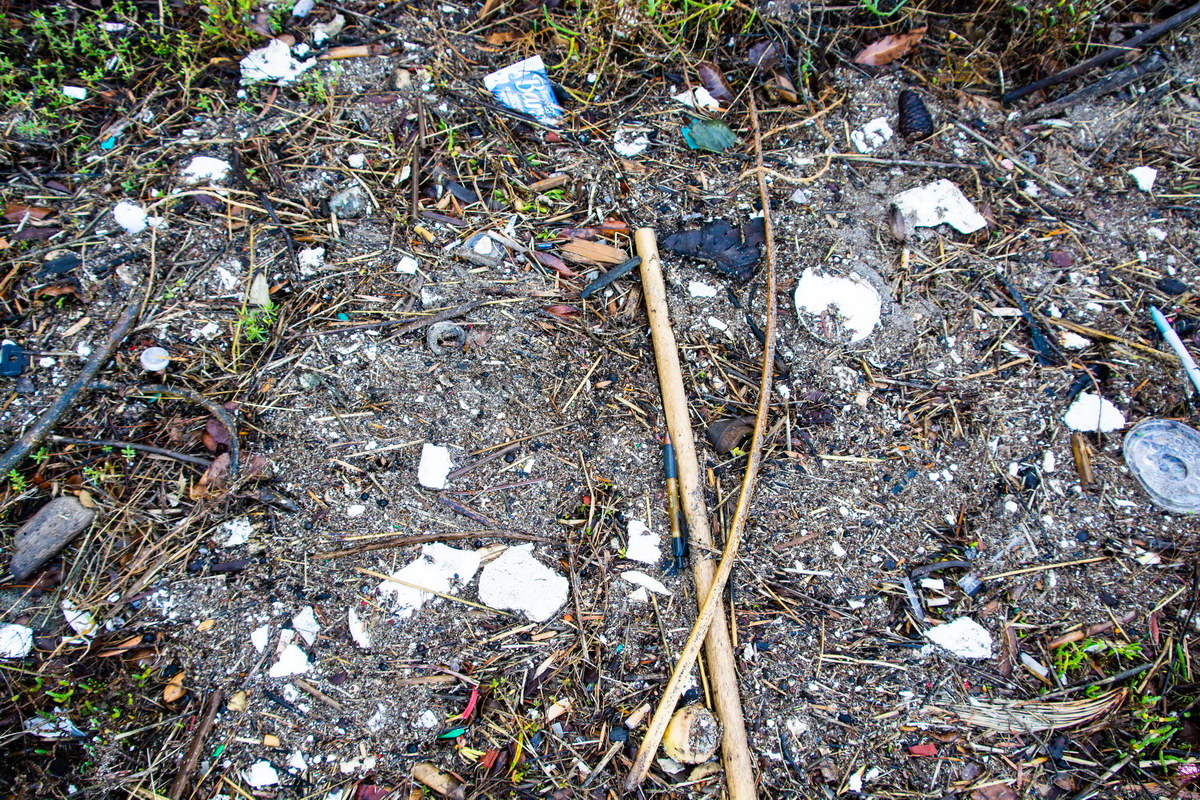 While those little balls weigh next to nothing, they were just everywhere we looked.  One could spend an hour trying to remove them from an area no larger than your two feet!  Knowing how fruitless that would be, we focused on removing the larger stuff, realizing that if we get that stuff out it won’t break down into the smaller impossible to remove Stryo-balls.

As we worked our way along the banks, we got to see several of the migrating birds.  Here is a curlew. And you can see more of the birds in our photo gallery below. 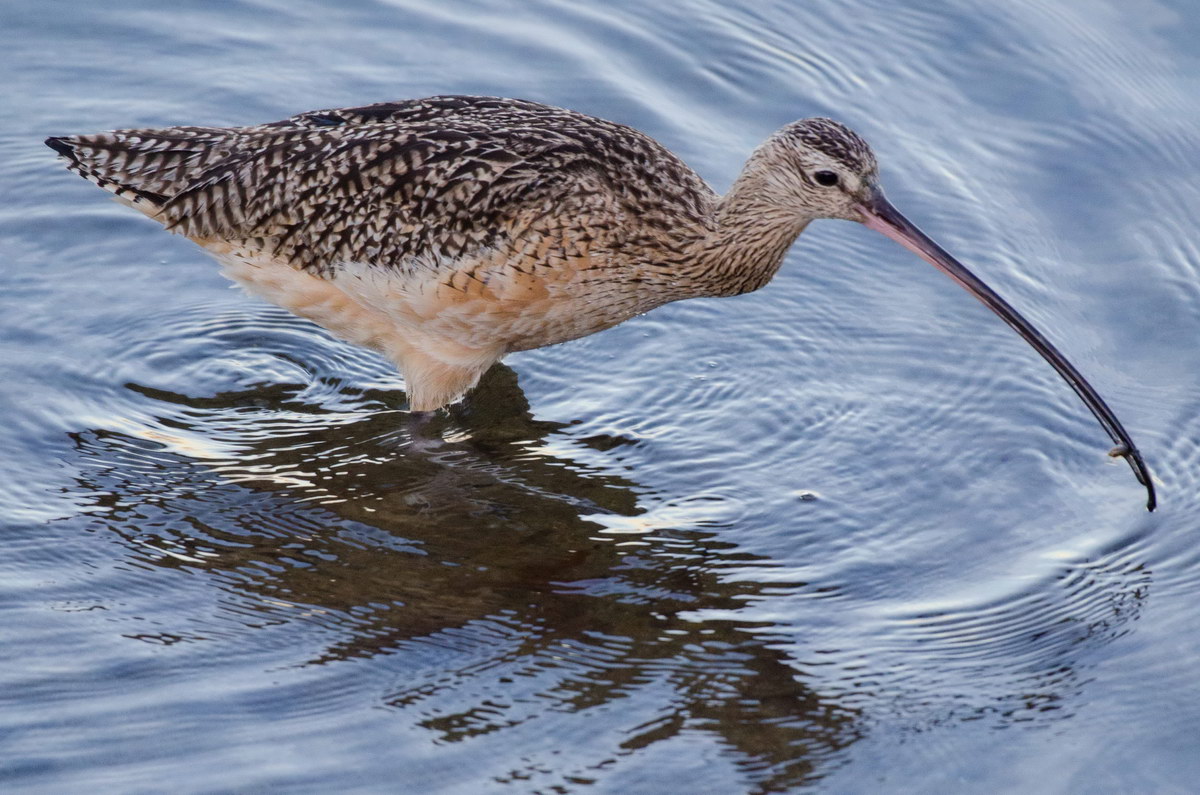 Darlene was so determined that she ventured further out than the rest of us. You can see here, she was determined to get that offensive blue plastic cup. 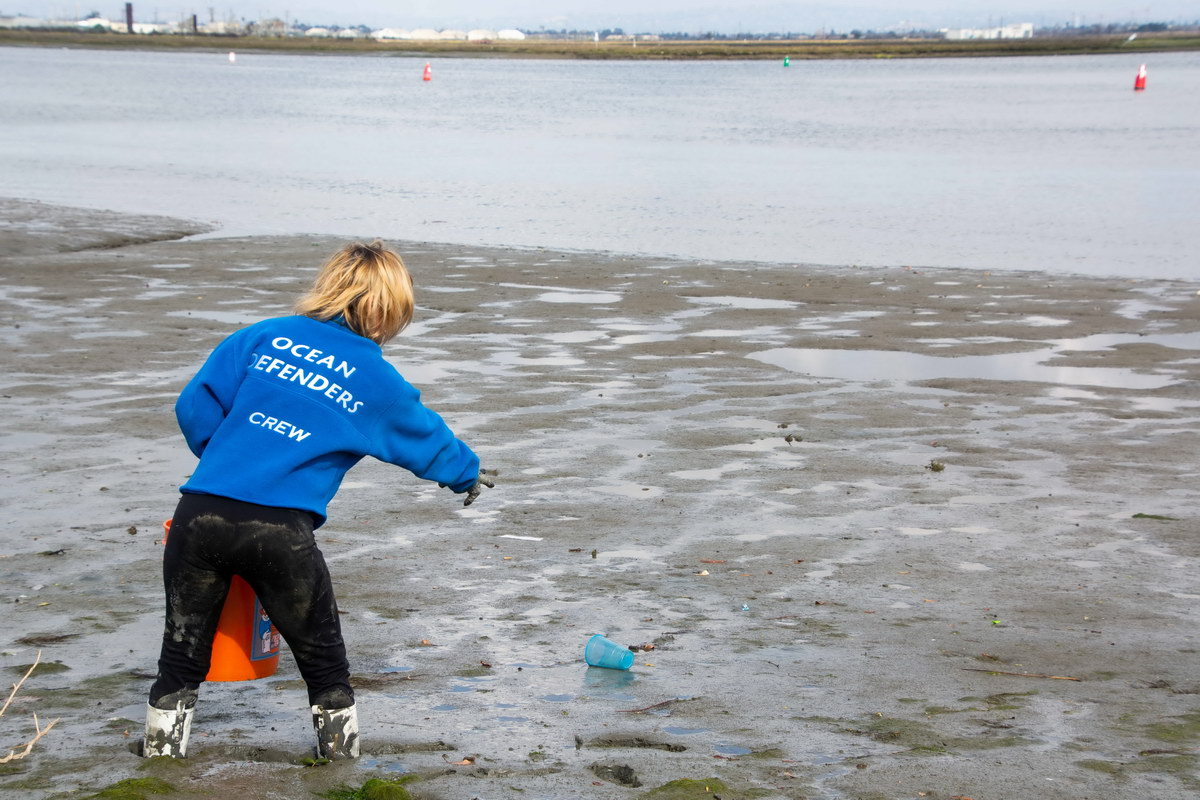 She had her knee-high rubber boots on and figured she could walk right over the mud.  Well, she okay did for a while, but as she reached for a plastic cup, something started to drag her feet down into the mud.  Was this the dreaded Creature from the Black Lagoon?!?!

Whatever it was, she was quickly sinking.  To the point that the mud was almost up to the top of her boots! 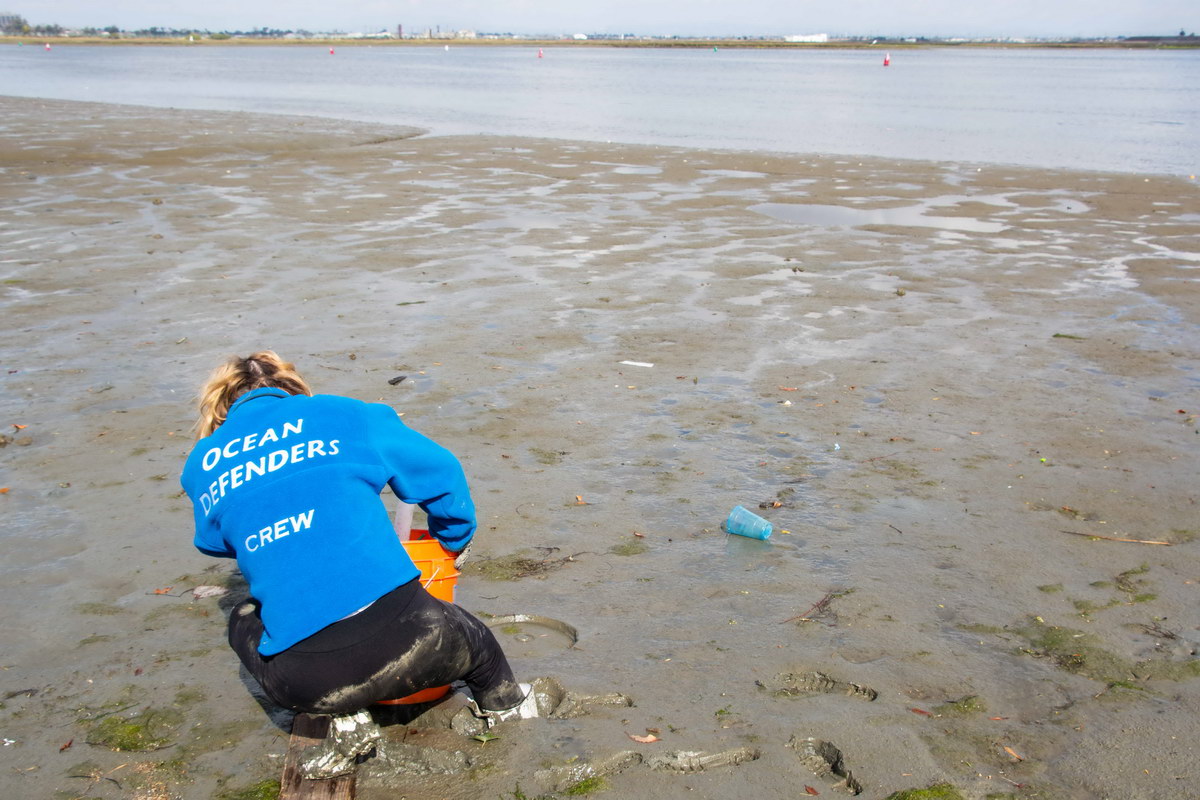 I couldn’t do anything to help her, except take pictures and laugh from a distance.  It took her about 10 minutes to extricate herself.  Everything on her was full of mud, except for her crew jacket… Whew!  Now we know she has her priorities right… 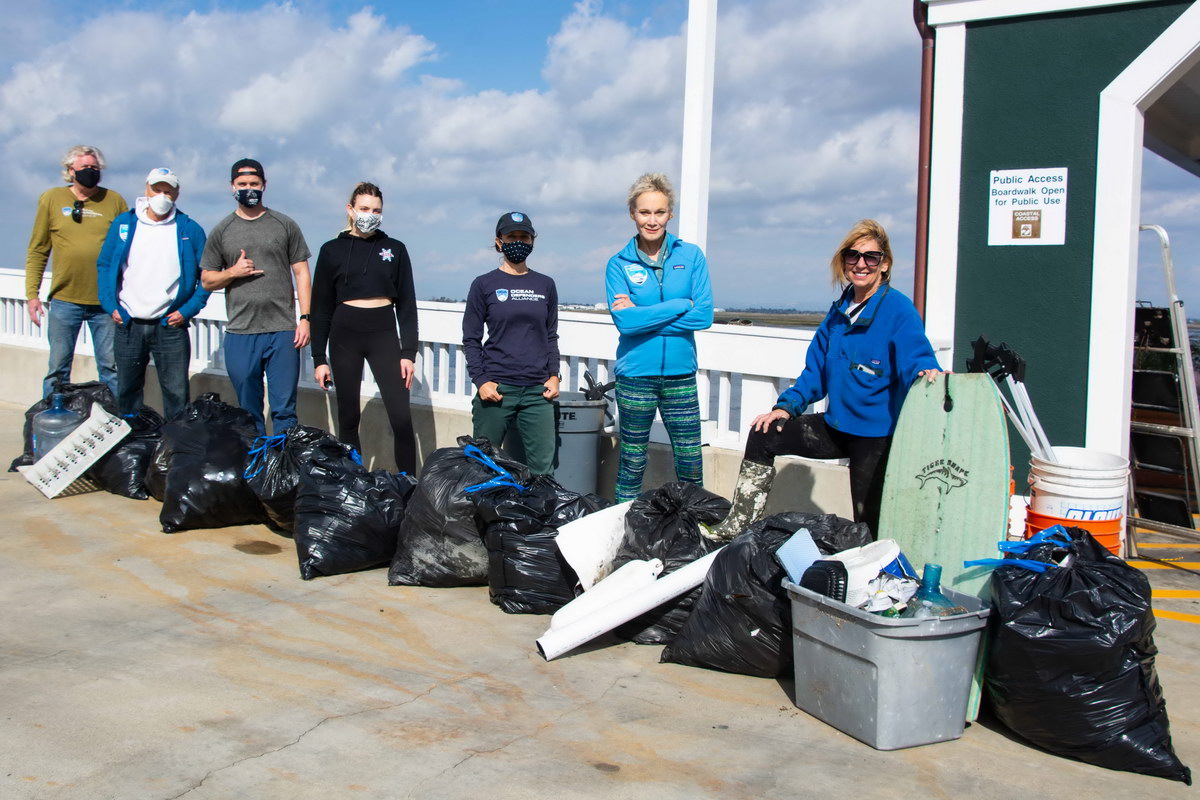 We spent over three hours on the cleanup, and while we removed about 400 pounds, there was still plenty more to remove.  With more rains expected this week, I’m sure when we go back next time it will look like we had never been there.

But at least we know 400 pounds of plastics will NOT be getting out to the sea, where it is next to impossible to remove.

Check out the "after" photo of the area we cleaned! 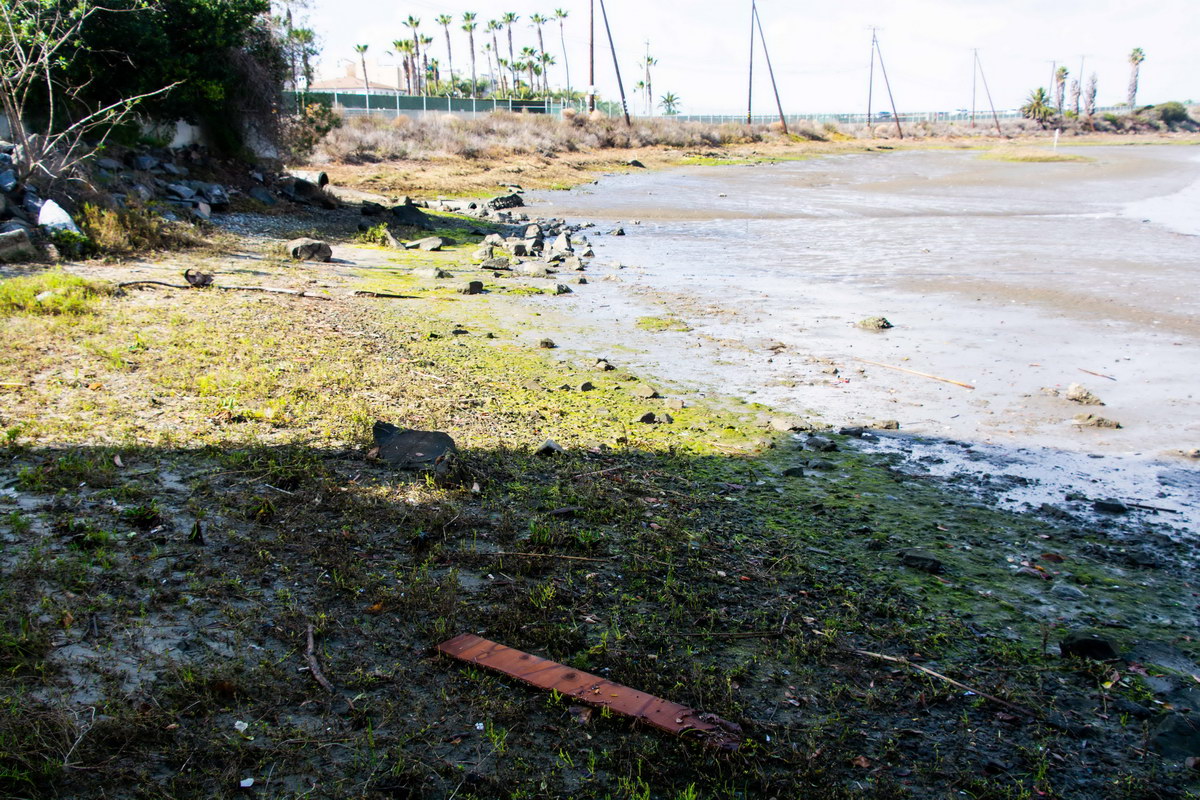 When, oh when, are people going to be concerned enough to STOP using single use plastics and severely reduce all the plastics we use?  We are literally drowning in the stuff!  Scientists are estimating that by 2050 there will be more plastics in the water than fish.  Do we really want to see that prophecy come true?

Check out video of our crew talking about the debris removal:

If you'd like to help out and you live near our bases of operations -- Huntington Beach, CA or Hawai'i (Oahu or Big Island), please check out our volunteer pages.