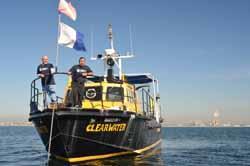 Volunteer Boat Crew John Krieger and Sam Lopez onboard the Clearwater, the coast of Huntington Beach, CA in the backgroundAfter chomping at the bit for the last two-and-a-half weeks, we finally got our chance to head back to Salvio’s Barge, 65-feet under water, just off the coast of Huntington Beach. Last time we tried, December 30th, we got skunked by near zero underwater visibility.

Yesterday’s weather report (for Wednesday, January 16th) said we would have flat seas and “warming” weather. Hah! It was half right. I got in my car at 6am and was greeted to a bone chilling 37 degrees as I headed to our boat Clearwater. Our faithful volunteers showed up on time and we pushed off at 7:35am.

We had a great ride to the site; the seas that were perfectly calm. The guys were ready to jump in as soon as we had the boat secured over the wreck. As always, Steve Millington led the team of divers. Steve was joined by Eric Humphreys and Graham Futerfas serving as the working divers. Andy The was filming underwater (U/W) video of all the action with Dudley McLaughlin accompanying him to shoot U/W still shots.

It wasn’t long before lift bags—which are the float devices that propel the attached debris— started coming to the surface. After about an hour, we got the divers back onboard, and pulled in the bags and net. The guys did a surface interval (rest) and headed back down. 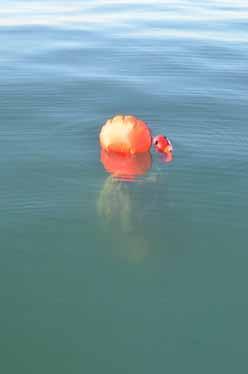 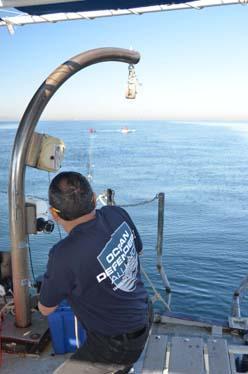 Visibility was really good for this site at 15-20 feet. So the team was able to see that there was a significant amount of net smothering the site. They also saw an abandoned lobster trap, so they attached it to a lift bag and sent it to the surface. In no time at all, we had four lift bags bobbing on the surface.

John Krieger (First Mate), Sam Lopez (boat crew), and I had our hands full on the deck getting all the divers on board, and then retrieving all the bags. 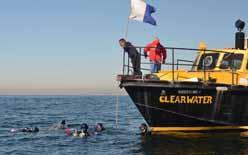 Divers in the water near the
bow of the Clearwater

John and Sam haul in net onto the deck

In total, we removed approximately 500 pounds of net and a 100-pound lobster trap. We didn’t see any dead animals, but it is not that surprising because if there were any they would be predated on and in 3-5 days any remaining carcass would be completely disintegrated. 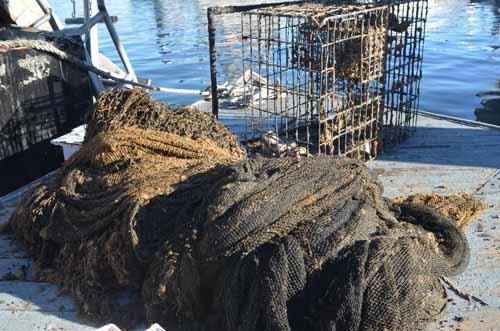 Because of the efficient work of our experienced debris-removing boat and dive crew, we wrapped up this operation and were heading back to our San Pedro slip by one o’clock in the afternoon.

Spirits were high on the cruise back. We were all pumped, ready to go back and remove some more net. The dive team feels that we only got about one-third of what is on the site. So, we are making plans for another visit to this artificial reef that is getting better looking with each ODA visit. 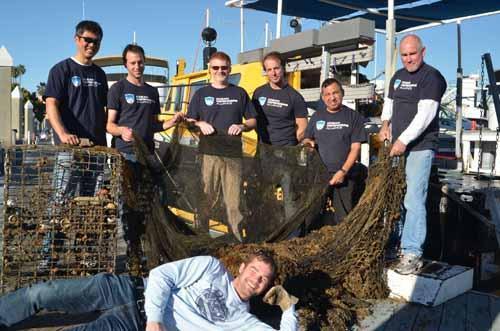 Visit our Facebook page in a couple of days to see what pictures of what it looked like underwater. I am told it is a really pretty site, with lots of large fish around it. But shush…DON’T tell the fishermen!

Please help ODA get back to this site and others like it!