.By Founder and President Kurt Lieber

ODA continues to seek to expand the scope and reach of our efforts to cleanup the underwater world of the Hawaiian Islands.

To that end, ODA Hawai’i Island Chapter Leader Sarah Milisen has been in conversation with Jeff Jones, the manager of a dive shop called Kona Honu Divers (KHD). 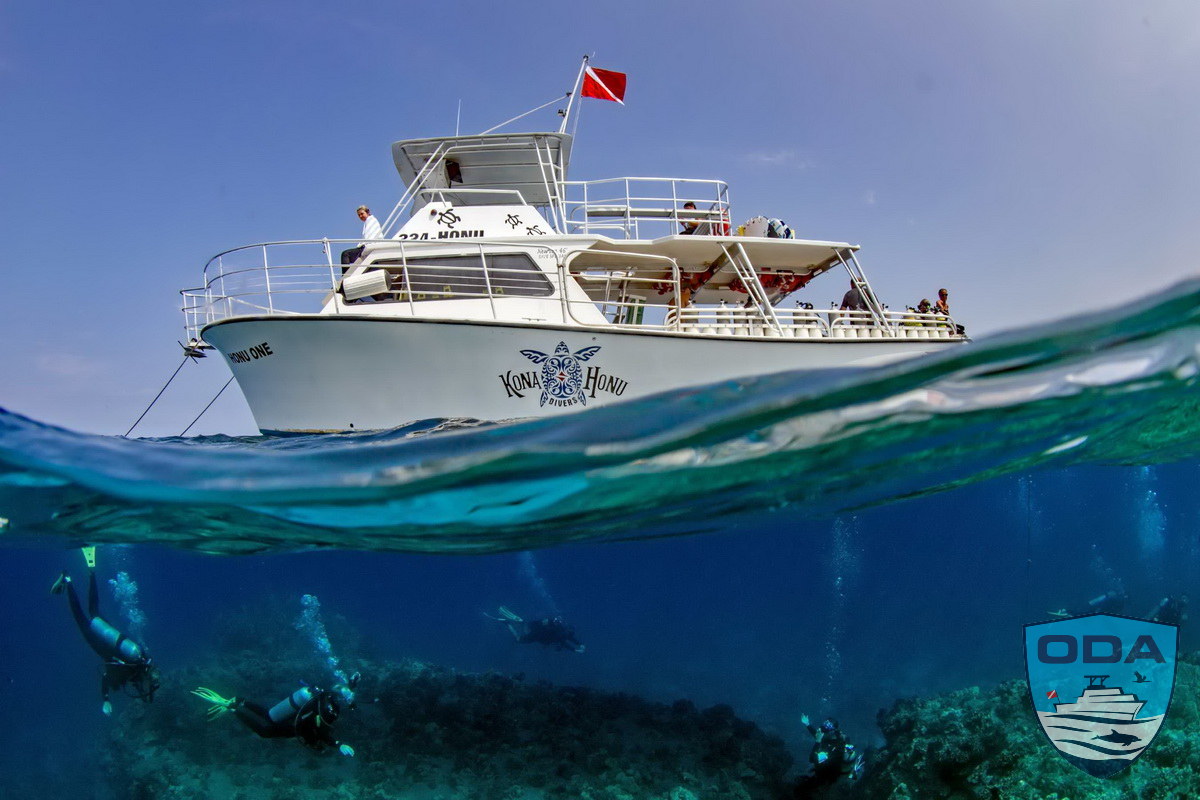 We’re very pleased that KHD Owner Byron Kay is committed to a very eco-friendly model for his business. KHD not only regularly contributes to a variety of conservation organizations, but they have many other green policies like powering their facilities with solar energy and using re-usable/recycled products such batteries, water bottles and t-shirts.

When Jeff presented the partnership idea, Byron was 100% onboard! And boy, are we glad about that!

With both Byron and Jeff being very enthusiastic about partnering with ODA, they offered to let us charter their dive boat, Honu 1, (pictured above) for our marine debris removal expeditions.  The KHD boat safely holds about 15 divers.

To gage interest within the dive community and see if we could recruit enough people to make this project economically feasible for us, Sarah worked with Jeff who arranged for us to give an ODA presentation to their dive club members. 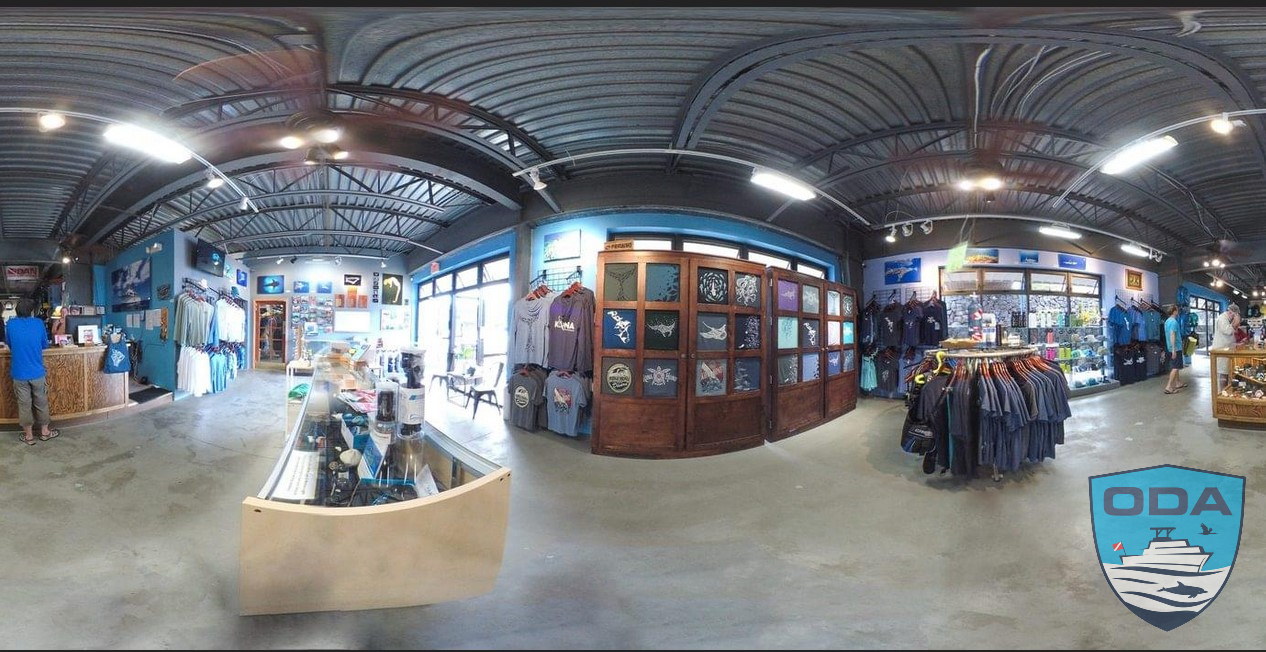 On Thursday, July 7th, Sarah and I were honored to introduce the 25 attendees to ODA.  I gave a presentation about ODA’s mission and briefed them on our current events in California and Hawai’i.

Sarah followed my talk by explaining how this new partnership with KHD is going to work:  We’ll be taking volunteer divers out once, every other month, to sites where there are known accumulations of abandoned fishing lines and other debris.

By the end of the night, we had 15 people signed up for the first cleanup!

On Tuesday, July 12th, we boarded the Honu 1 at 8:30am, stowed the dive gear, and headed north to a site called Tako City.  It’s a deep dive site that sits just off the coast from the Kona Airport.  It also happens to be in the same bay where the manta rays congregate at night for a feeding frenzy that’s witnessed by dozens of dive boats loaded with tourists every night.  This is an event not to be missed, as you get to see mantas swimming as close to you as the person next to you in your car.  Maybe, just maybe, one might swim past us on our dive? 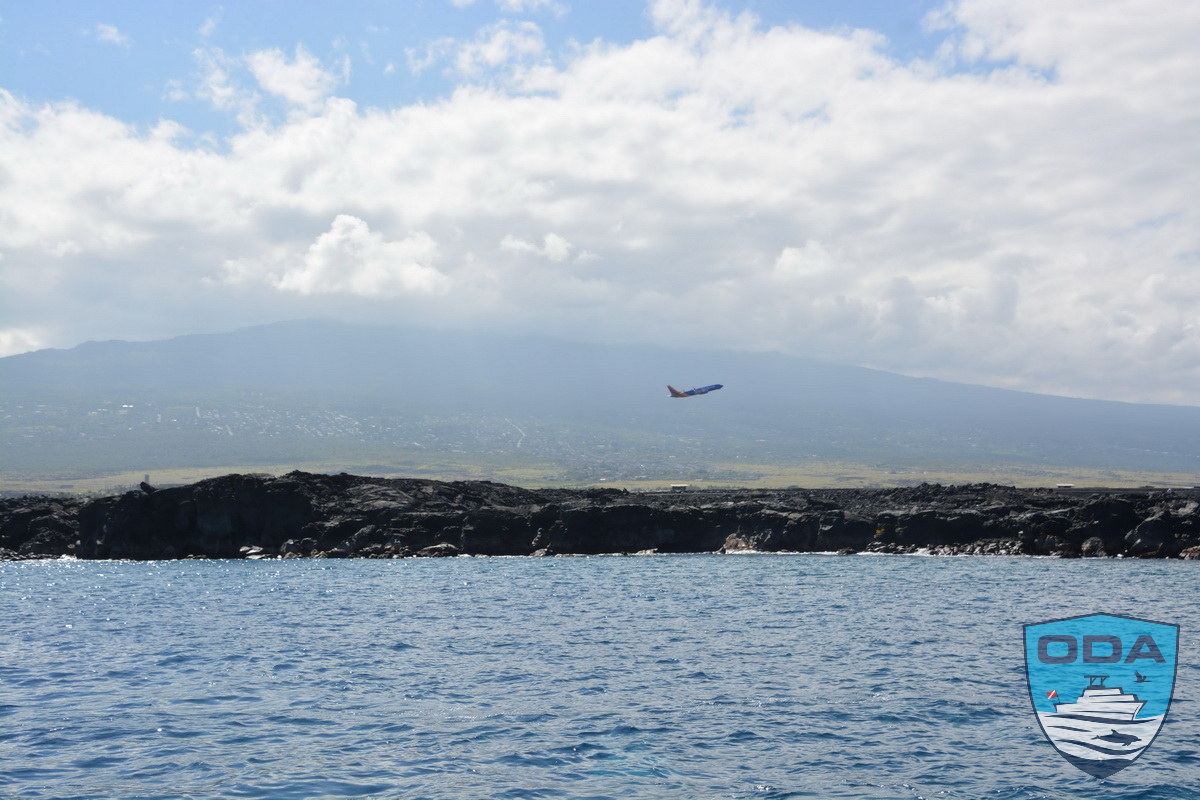 The south end of the bay gets visited by a different kind of congregation: recreational fishermen.  Because there is a steep dropoff from the shore, the fishing community can cast their lines a short distance and their weighted hooks can drop down into waters over 150 feet deep.

As you can imagine, a lot of the fishing line gets snagged on the corals that dominate this site. This is detrimental to the coral and ocean life swimming by.

The boat crew tied off to a mooring line at the site and then Sarah gave a quick briefing about what to expect down there and how best to remove the fishing lines.  She put emphasis on keeping proper buoyancy and not coming into contact with the corals that we were trying to free from the fishing lines. 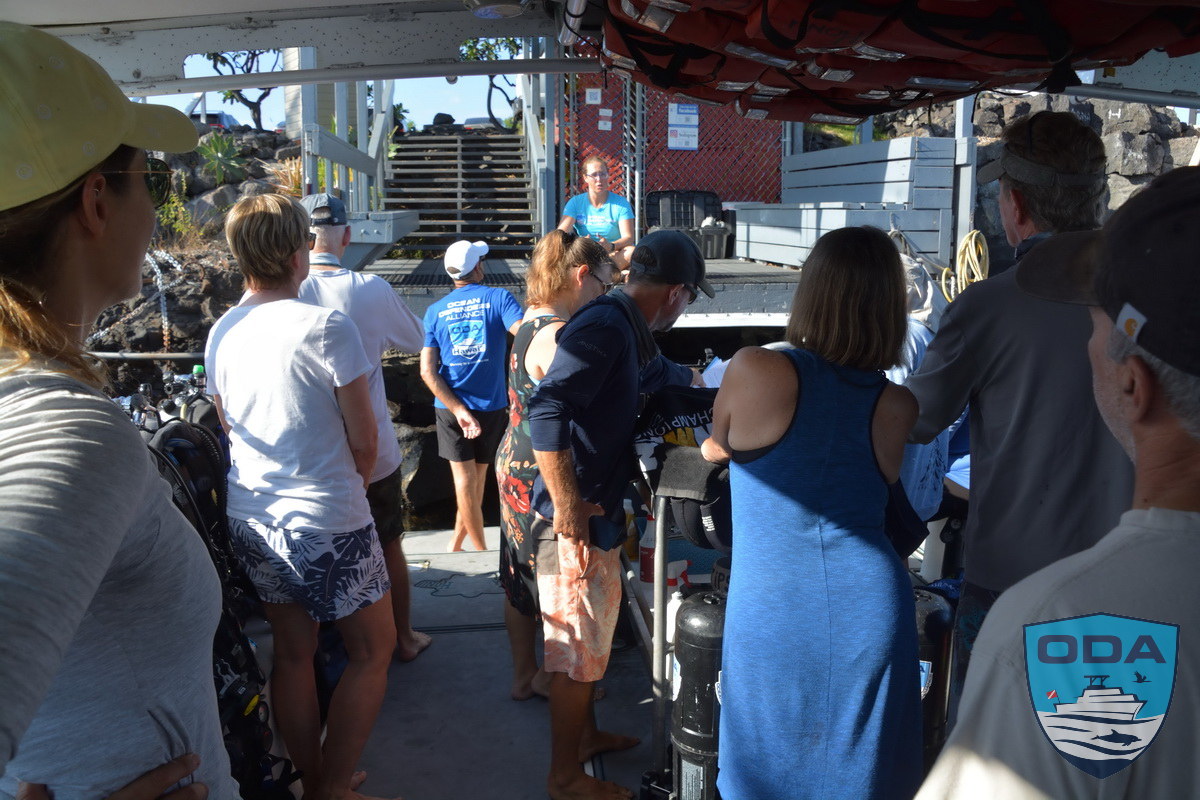 It doesn’t take much of an impact from a fin or knee to break off a piece of coral.  Everyone on the boat was selected because of their good dive skills, so we felt confident that we could do this without harming any corals. 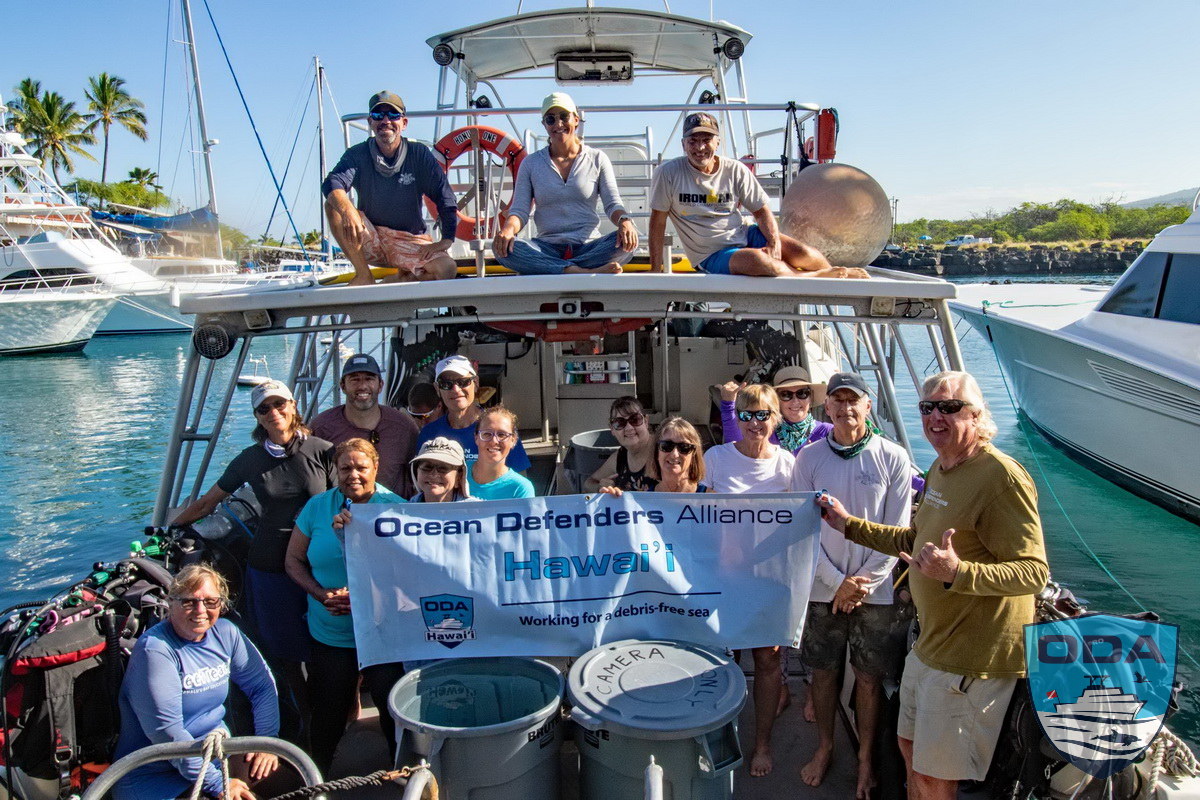 After the dive briefing, all 15 divers headed off in directions that were agreed upon in the briefing.  Some headed to shallower waters near the shore, while others headed down to a site that was just smothered in line, at 100 feet.  I stayed on the boat with Captain John to take pictures and help get the divers back on the boat. 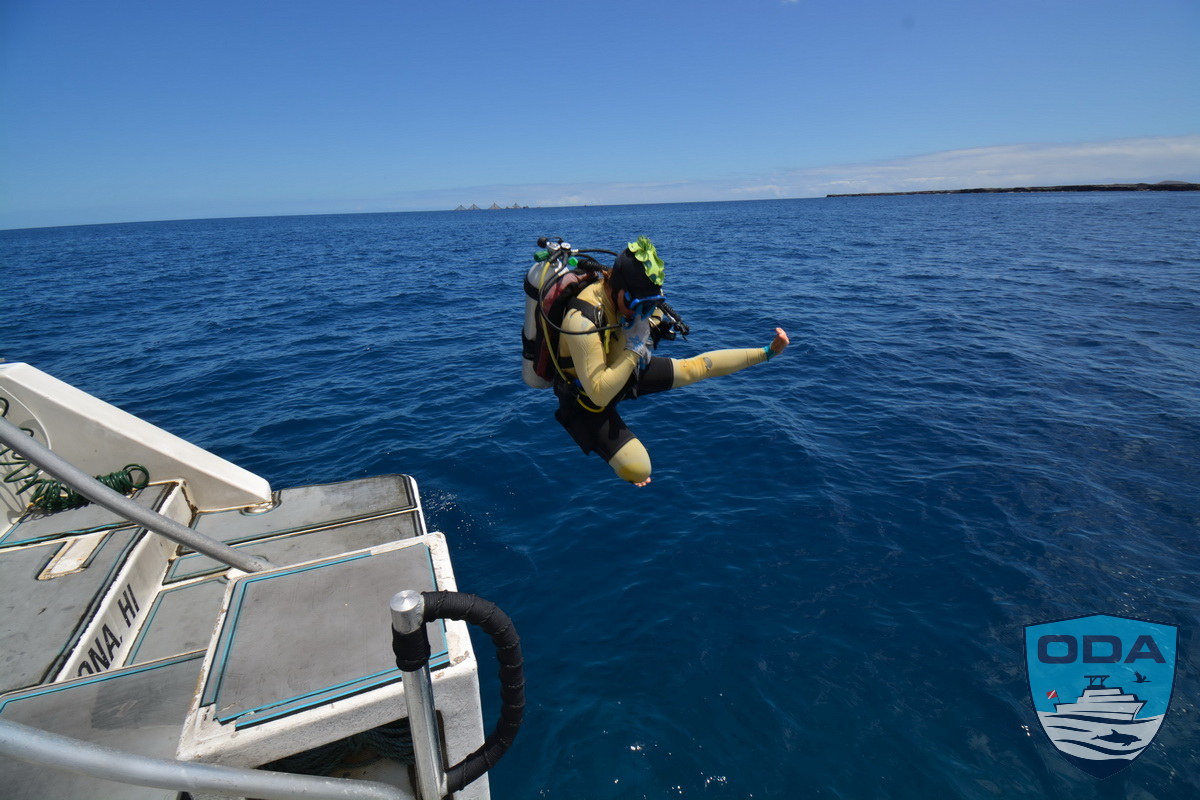 Check out the photo gallery below for some more fun "entry" photos and a bunch of photos of the divers and crew!

Because of the deep depth, the divers weren’t able to stay down very long.  After about 30-40 minutes everyone was back aboard telling their stories of how much debris they saw down there and explaining how time consuming it was to remove the lines from the delicate corals. 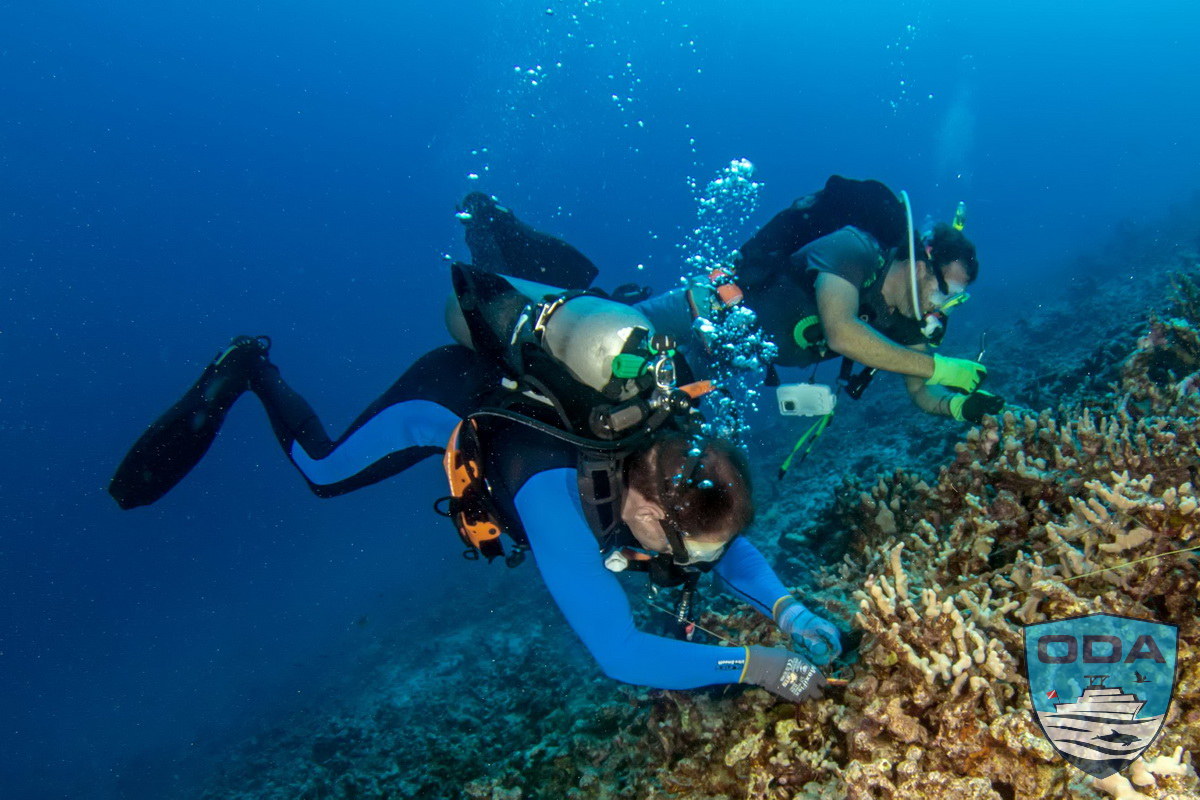 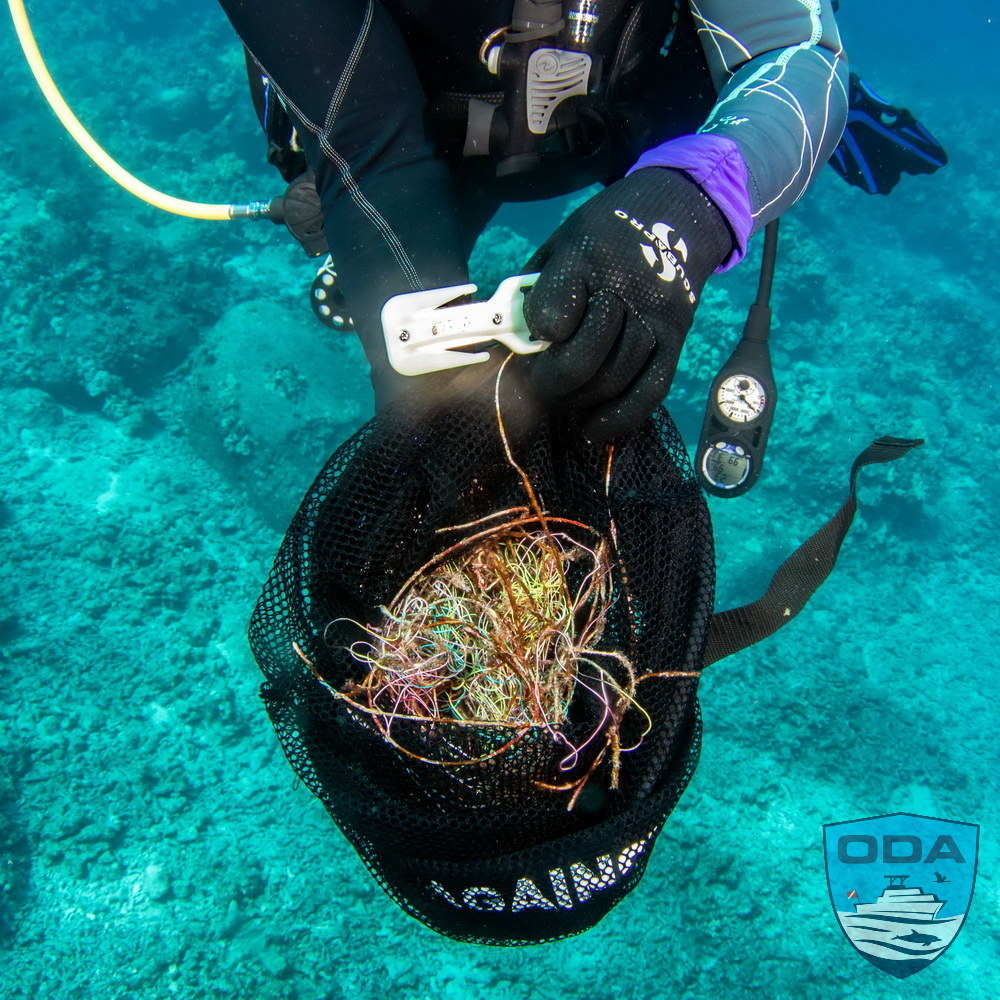 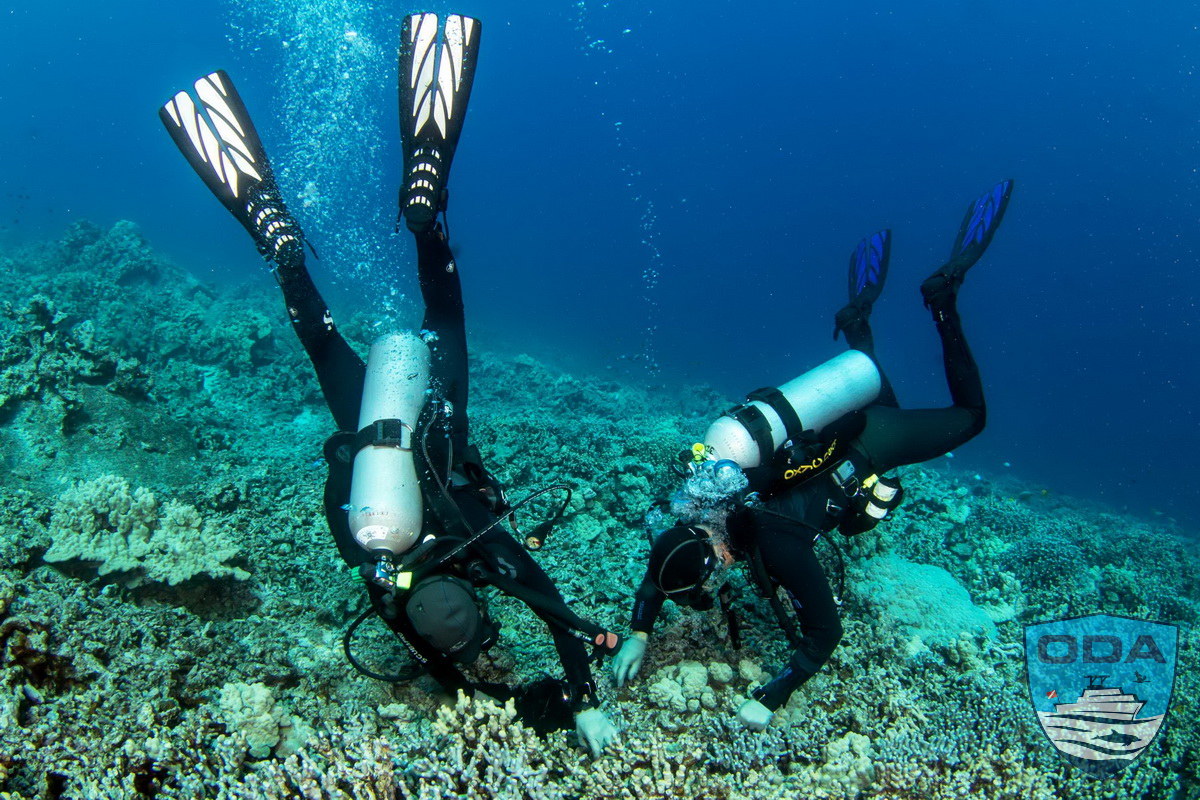 We had planned on going to another site for a second dive, but everyone agreed that this site required another dive to get more of the thousands of feet of line that covered the area. 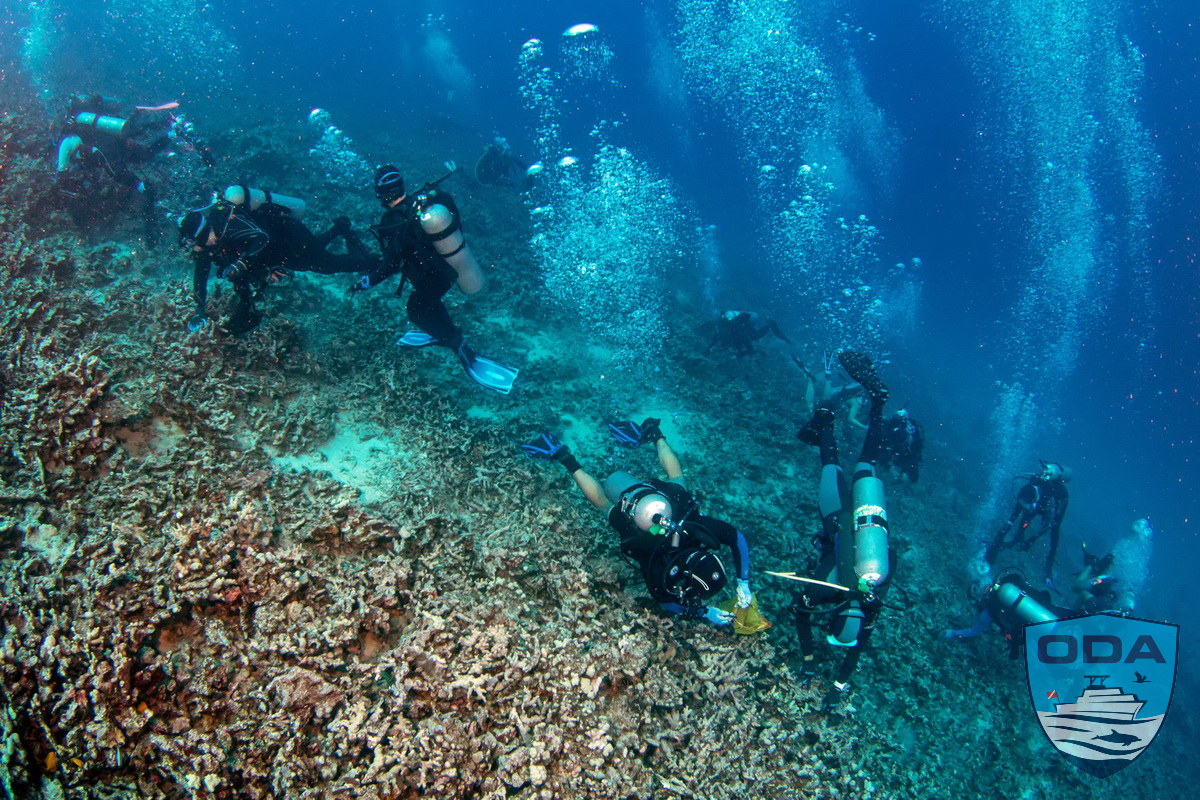 So, we took a one-hour surface interval (break), swapped ocean stories and munched on some decadent brownies that Juan had baked up the night before. Thanks, Juan!

I can’t tell you how rewarding it was for me to hear everyone’s excitement and to see a concerted group effort concentrating on thoroughly cleaning this one dive site.  When these folks are on one of their regular dives, they take a knife with them and remove what debris they can while being herded around by a dive master who’s trying to keep the divers bunched up together while they look for interesting fish and topography.  Typically, they never stop for very long, so there’s not much time to remove the lines they would see.

Sarah had spotted a lot of line at one particular area and prompted everyone to tackle that section of the reef.  Problem was, it was in 100 feet of water.  Since this was the second dive, most people ran through their air supply more rapidly than before.  Some came up after 20 minutes.

At one point during the dive, Sarah came across a large snail, called a Tridents Trumpet.  Gorgeous animal as you can see here. 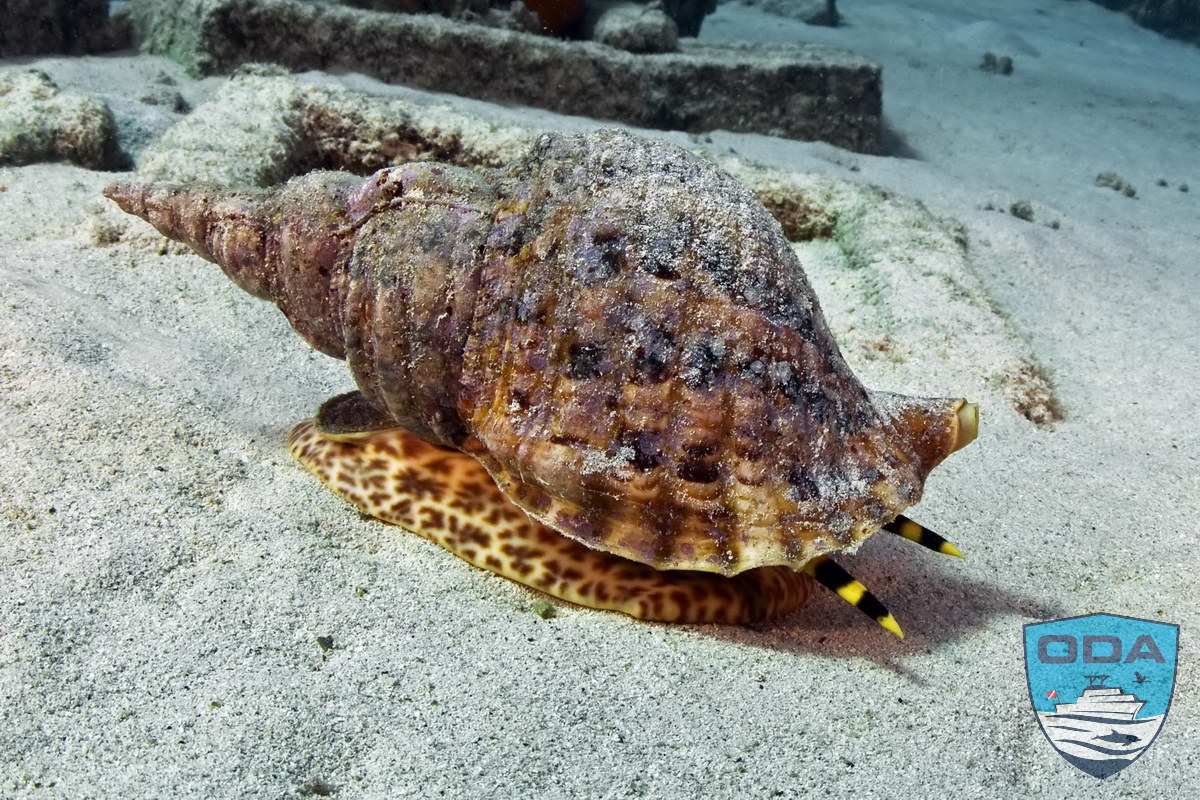 Then she noticed a mess of fishing line underneath it.  When she picked it up the animal closed its “hatch.”  This is what it uses to protect itself from predators that want to get at the fleshy meat that they love to eat.  When the Trumpet senses something trying to get at its body, it quickly closes that hatch.

Well, the fishing line was entangled in the hatch.  So, the animal was forever towing itself through the sand taking the mass of line with it.  If the line were to snag on something, like a rock or a coral, it would be unable to move any further.

So, of course Sarah spent several minutes cutting the line away, until the critter was free.  Even though Bo wasn’t in the area to get a picture of it, he let us use this picture that he had taken prior to this event.

Even though the divers weren’t down for very long, the end result was worth it all.  About 1,000 feet of fishing lines removed! 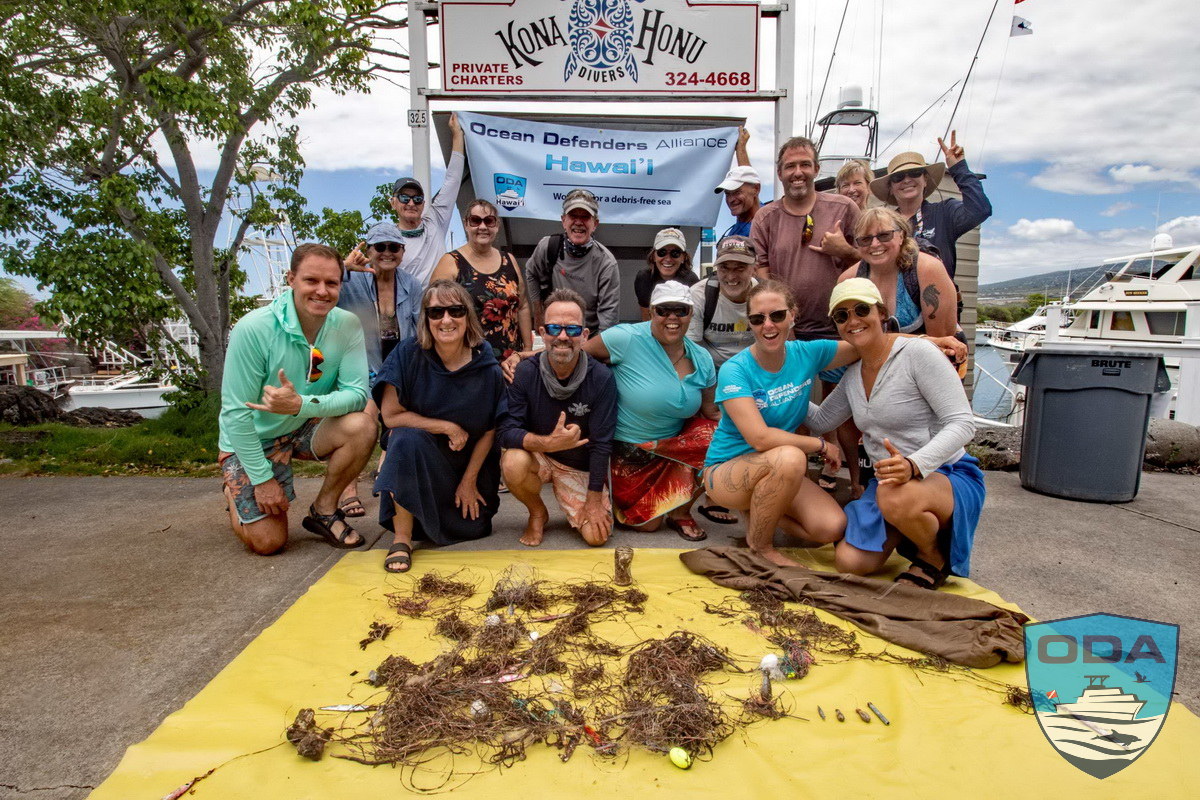 It might not look like much on this tarp, but everyone said it made a huge difference to the corals and fish that call this area home.

One of the best parts of this day was having a top-notch UW (underwater) photographer with us.  Bo Pardau has had his images published in all kinds of magazines and other publications, including National Geographic.  He took all these great UW shots.  Thanks, Bo!

Mahalo to all the divers who took time out of their busy lives, during the week no less!  Some of them actually participated in the Honokohau Harbor cleanup we did two days prior to this dive.  Juan, Dan, Becky, Dot, and Kaleb:  the oceans are lucky to have such doubly dedicated ocean defenders!

It was a blast hanging out with everyone, getting to know each other better, AND making plans for the next dive.  We all agreed – the sooner, the better! With Kona Honu Divers on our ODA-Hawai'i team, we're confident we'll be able to do more to care for ocean wildlife and their habitats. Thank you, KHD, for your partnership! We look forward to doing great things with you all.

Check out our ODA-Hawaii page and see what we've been up to prior to this outing!