Even with all the great weather forecasting being done these days, when it comes the oceans, you can never tell if you’re going to be heading into great conditions or a great mess… 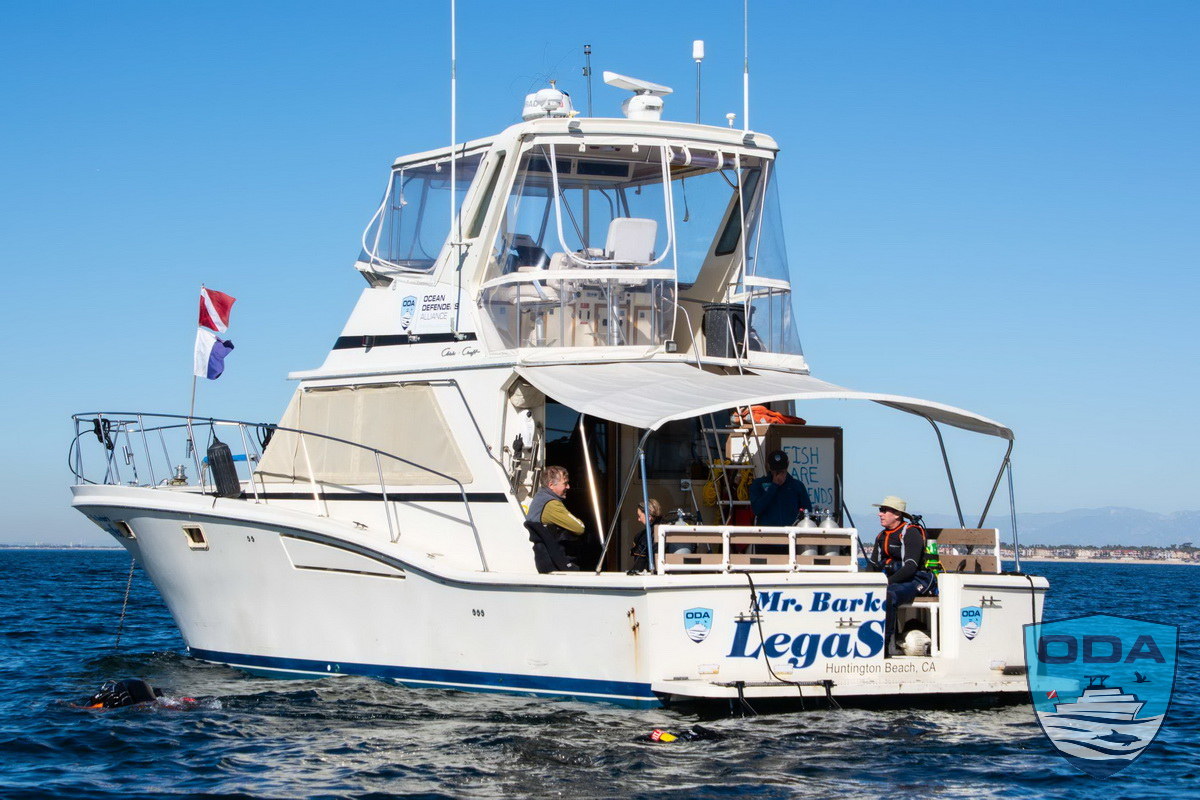 Our boat the LegaSea has been out of commission for the last six weeks while we had extensive work done on the electrical systems and the fire suppression system.  The mechanics who did the work finally let me know that they had finished their job and we could now take the boat out for some trial runs.

On Wednesday, January 19th, Jeff Connor, Dave Merrill, and I met up at the temporary boat slip in San Pedro.  We had a brief conversation with the mechanic about how the new upgrades work, and then Jeff, Dave and I took her out for a test drive to ensure everything was working well.

Thankfully, everything ran fine, and we decided that we were ready to take a longer run and bring some divers along to get our feet wet again.

In December, Walter Marti had called me and to let me know that he had come across an abandoned net that needed to be removed.  But because the boat was inoperable, we had to put it off for several weeks. 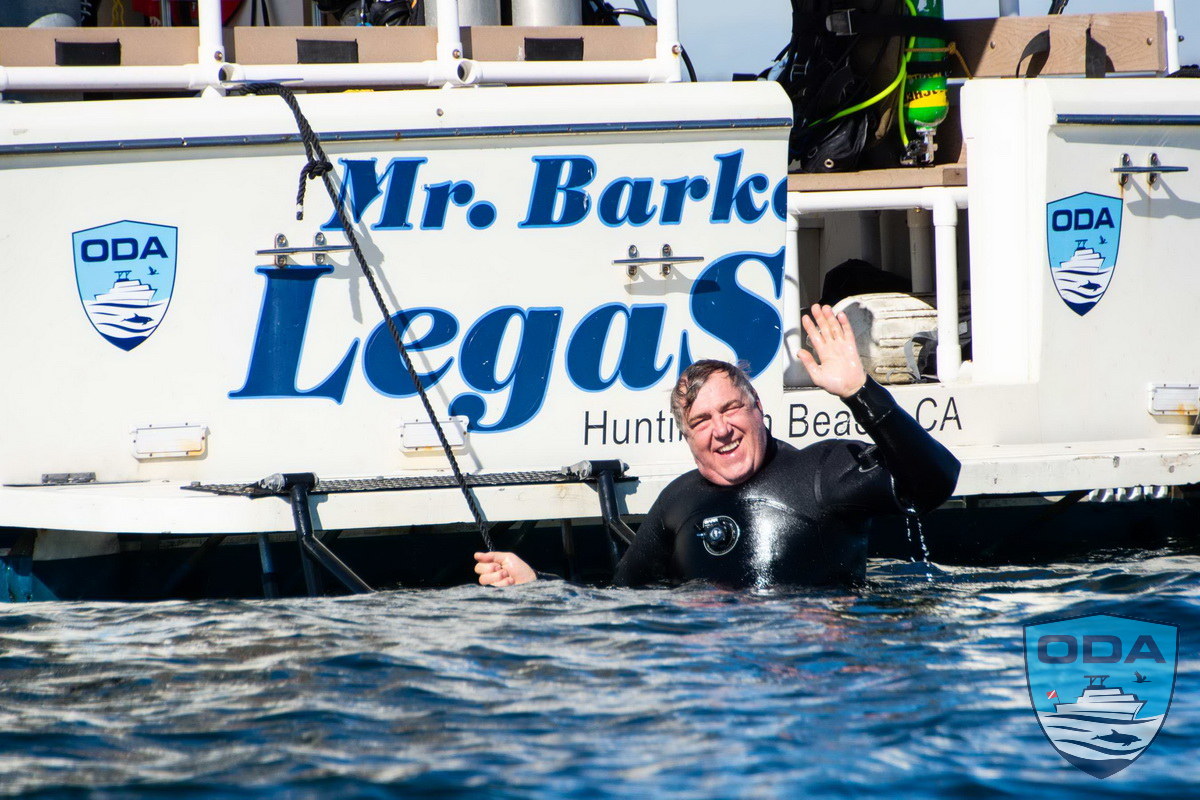 Walter is an avid diver, an outstanding underwater videographer, and a long-time ODA volunteer.  So, when he suggests something, we pay attention!

On Sunday, January 23rd, we boarded the LegaSea and headed down to the spot, which was about two miles off the coast of Huntington Beach. 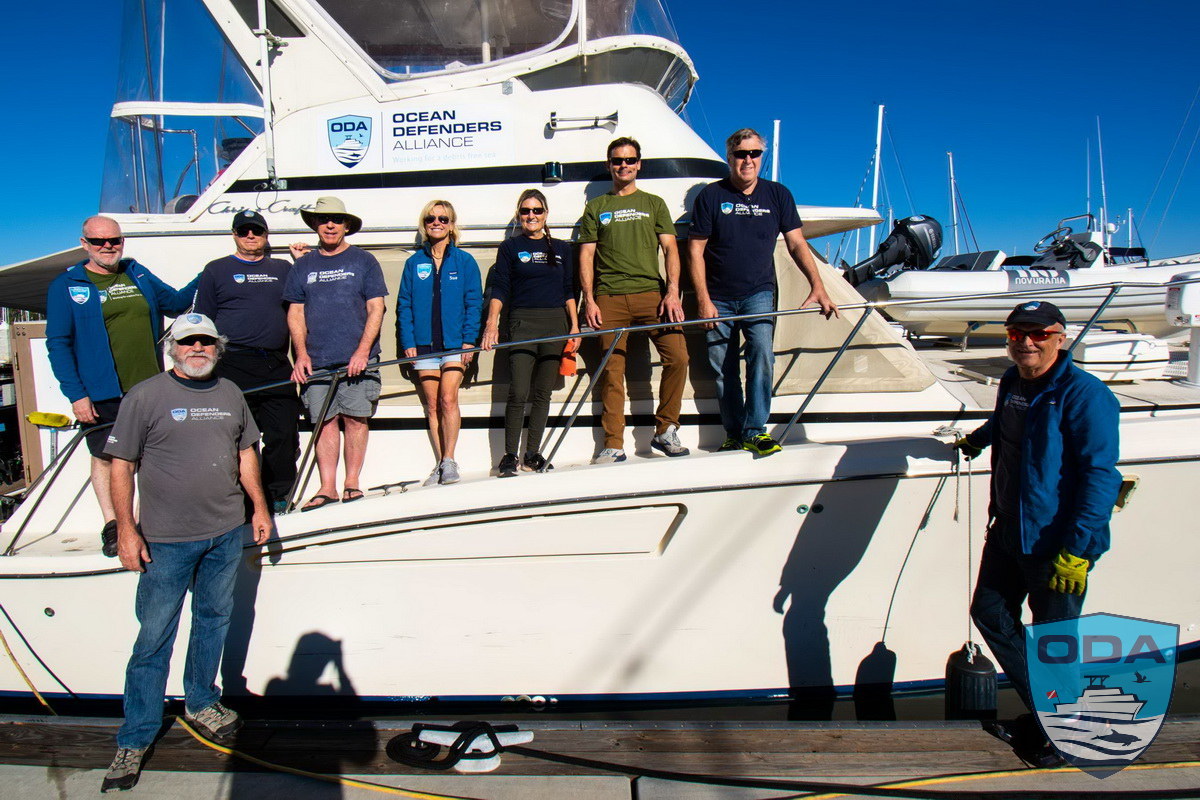 The deck team was Jeff Connor, Dave Merrill, Bill Maley, Sue St. Sure, and me. 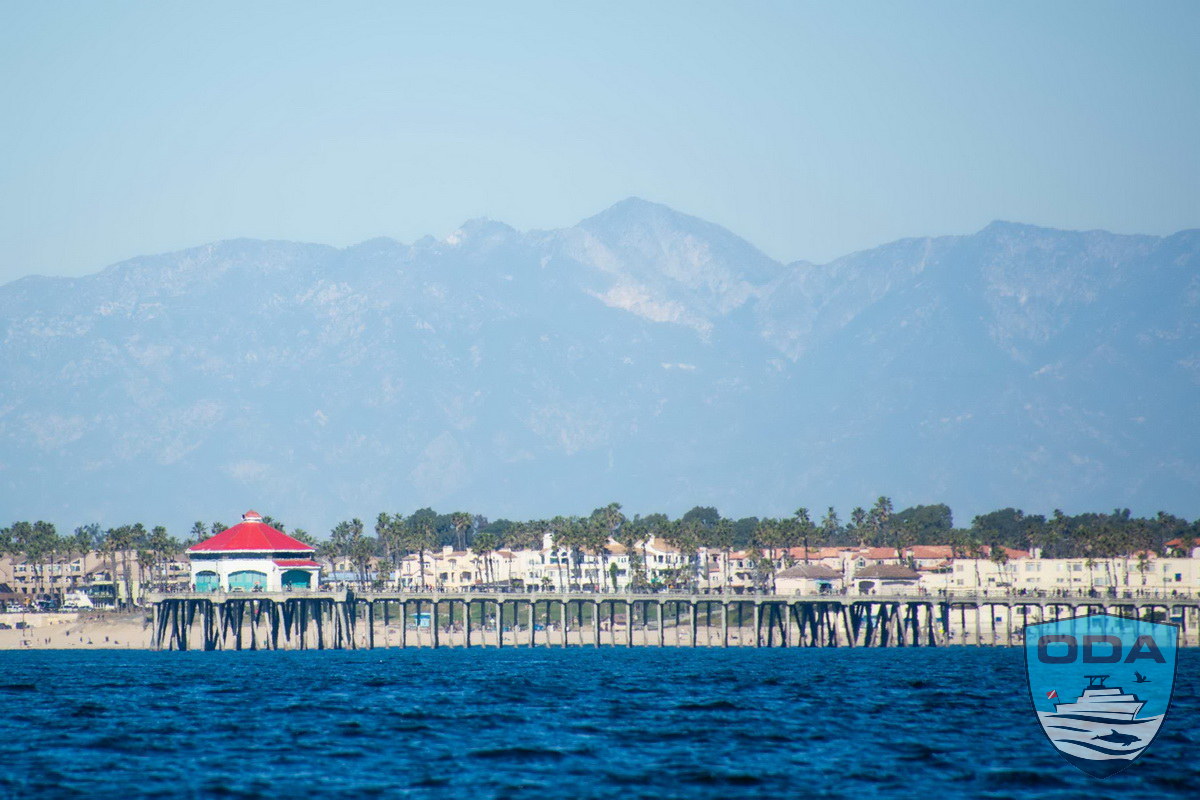 This was Craig’s first time out with us.  Mike had met him on some recreational dives and thought he would be a good dive partner as well as a good person to help with our mission.  Both Craig and Mike use rebreather systems, so their bottom times will be the same.  Kim, Walter, and Geoff use traditional scuba gear, and can’t stay down for as long as people on rebreathers can. 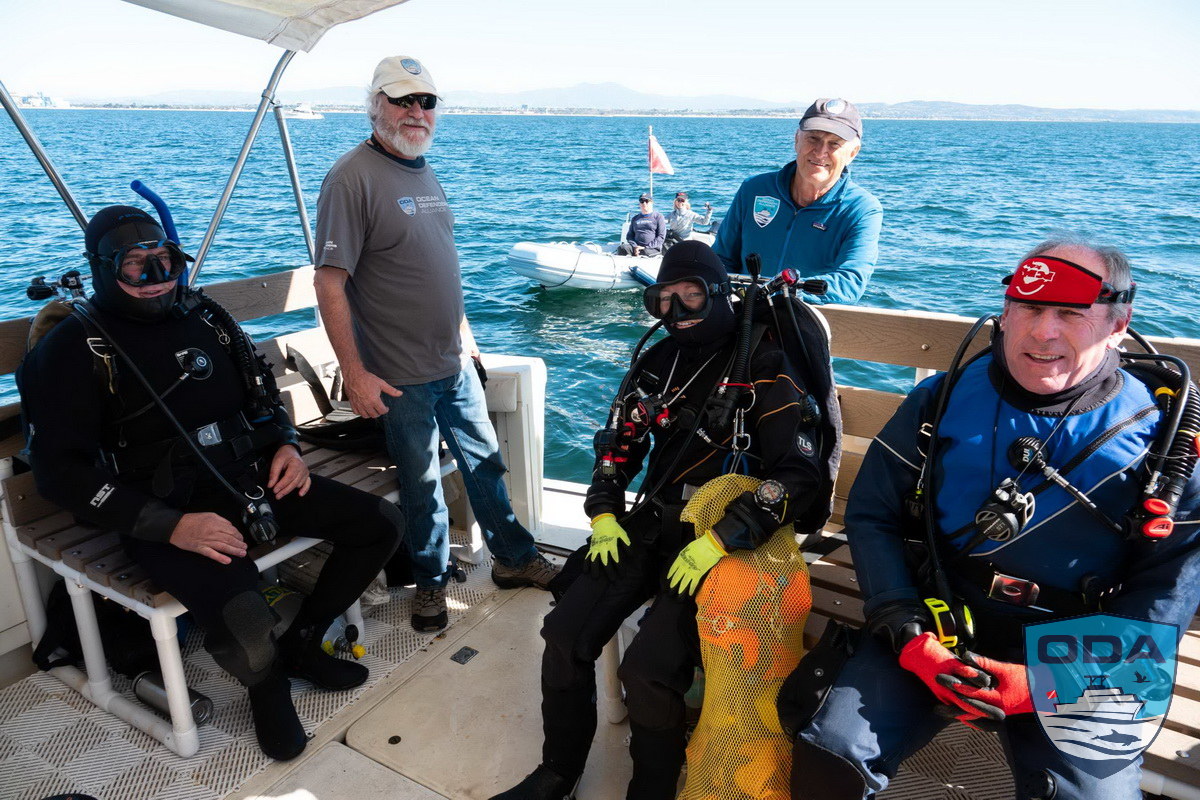 We dropped the anchor where Walter thought the net would be.  We crossed our fingers and hoped that we were close.

Mike and Craig splashed in the water around 10:30am, we handed them their scooters, and they headed down the anchor chain.  About 20 minutes later Kim, Walter, and Geoff followed their trail.

We had gotten reports of superb dive conditions on Friday and Saturday:  35-to-40-foot visibility (vis).  Great!  We thought.  In anticipation of this, the crew had happy dreams of being able to see beyond their extended hand for a change.

As soon as Walter got to the bottom he looked around and couldn’t see where Mike and Craig were, so he headed a few feet away when he ran into Mike.  Literally!  Vis was horrible, less than 5 feet…So, much for their dreams of good vis! 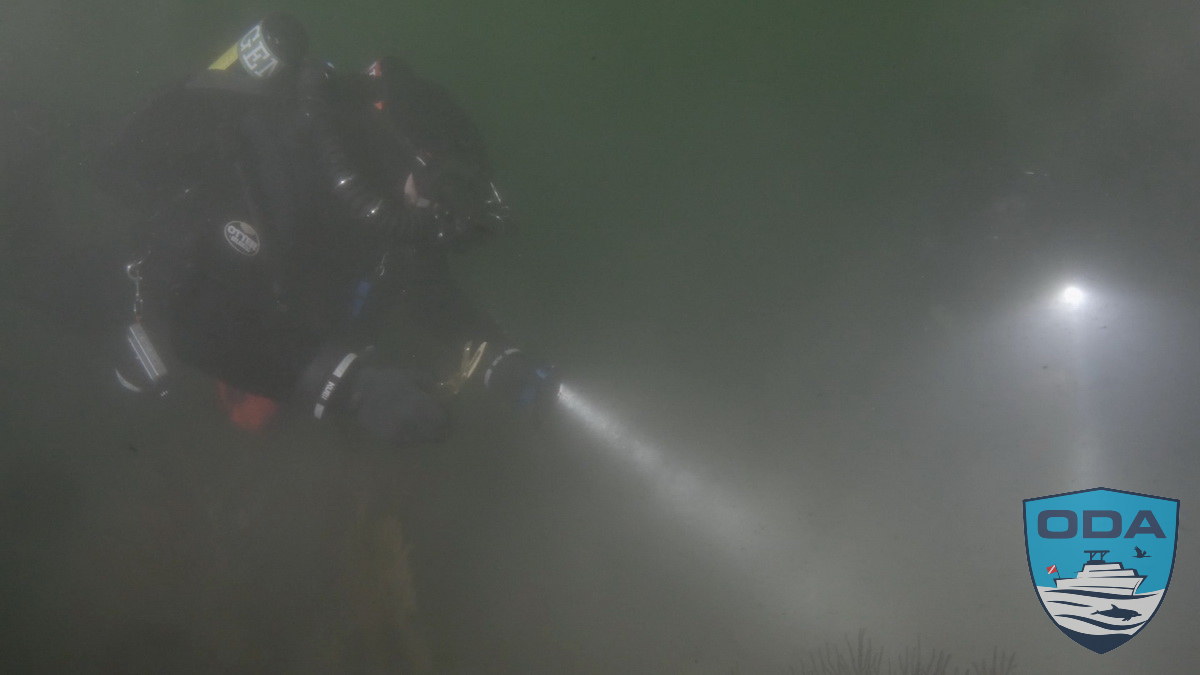 Luckily, we dropped the anchor just about on top of the net, so Mike and Craig got immediately to work.  They assessed the situation first and then started attaching lift bags to different sections of the net.

This was an abandoned squid net, made out of nylon.  And it stretched out about 70 feet along the sandy bottom.

As those two were doing what they could with the net, Kim and Geoff had found an abandoned lobster trap, which they send to the surface post haste.

As soon as we saw the bags at the surface, Sue and Bill got in the RIB (Rigid Inflatable Boat) and tracked the bags down.  They saw that what was attached to the float bag was a trap and proceeded to drag it over to the LegaSea.  Dave and Jeff then hauled it onto the front deck. 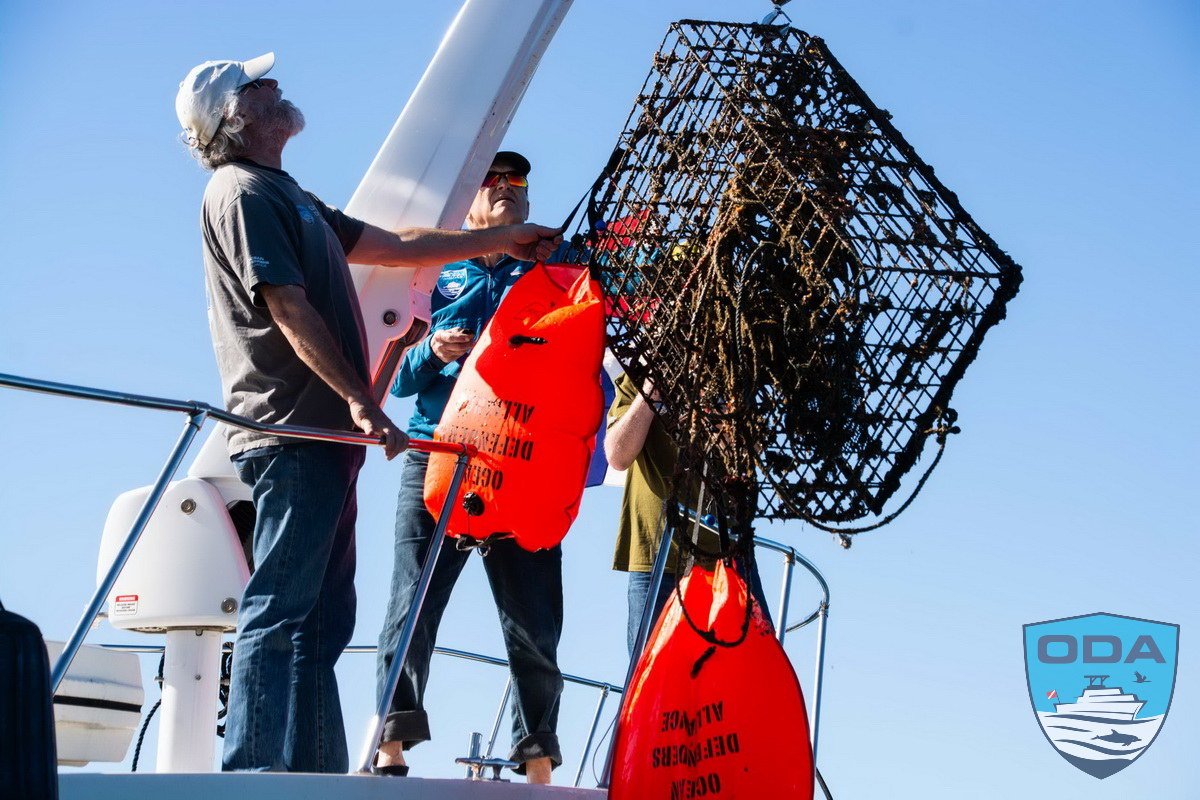 Ten minutes later all the divers were back on the boat, filling us in on what they had encountered.  Mike drew a sketch of what the stretched-out net looked like, and how best to get it off the bottom and then to the surface. 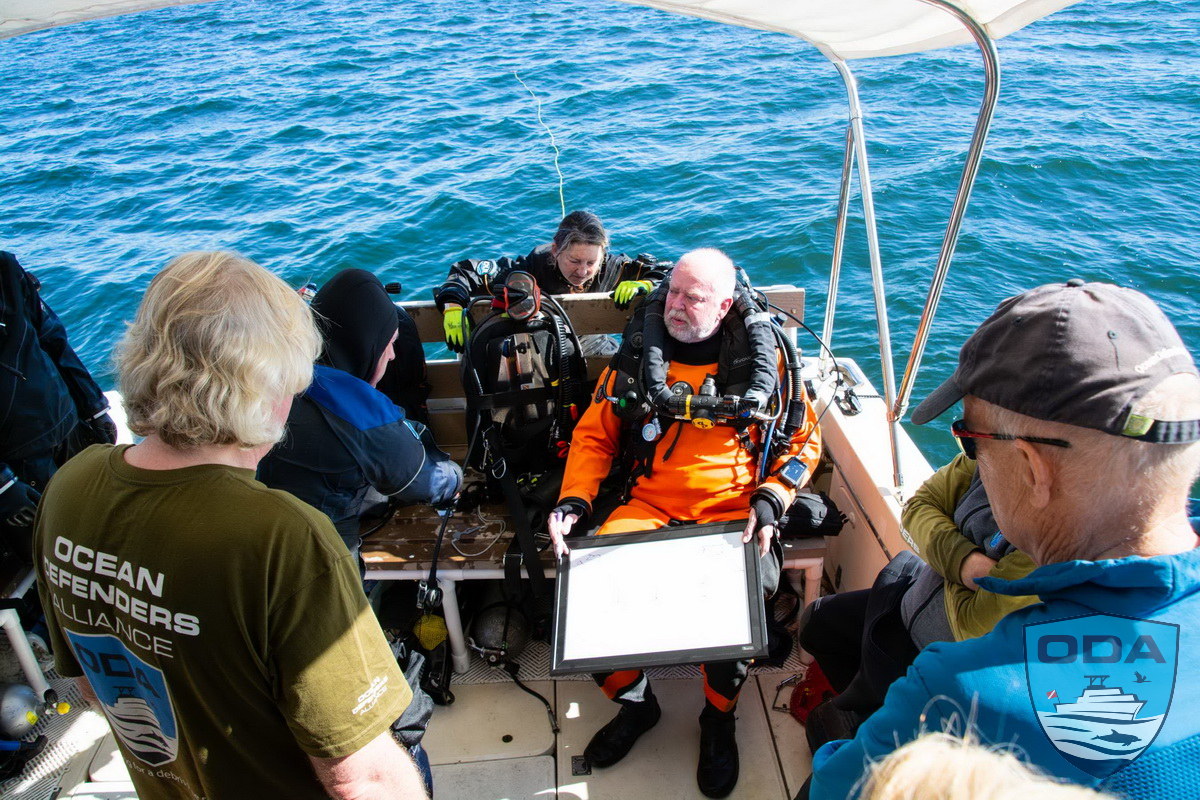 We ate some snacks and 90 minutes later all divers were headed back down.  Apparently, they did such a good job of prepping the net that they only needed 20 minutes to cut the net free.

Then we got to see all these lift bags break the surface! They were aligned almost in a straight line.  Sue and Bill attached a line to the first bag and dragged it over to us on the boat. 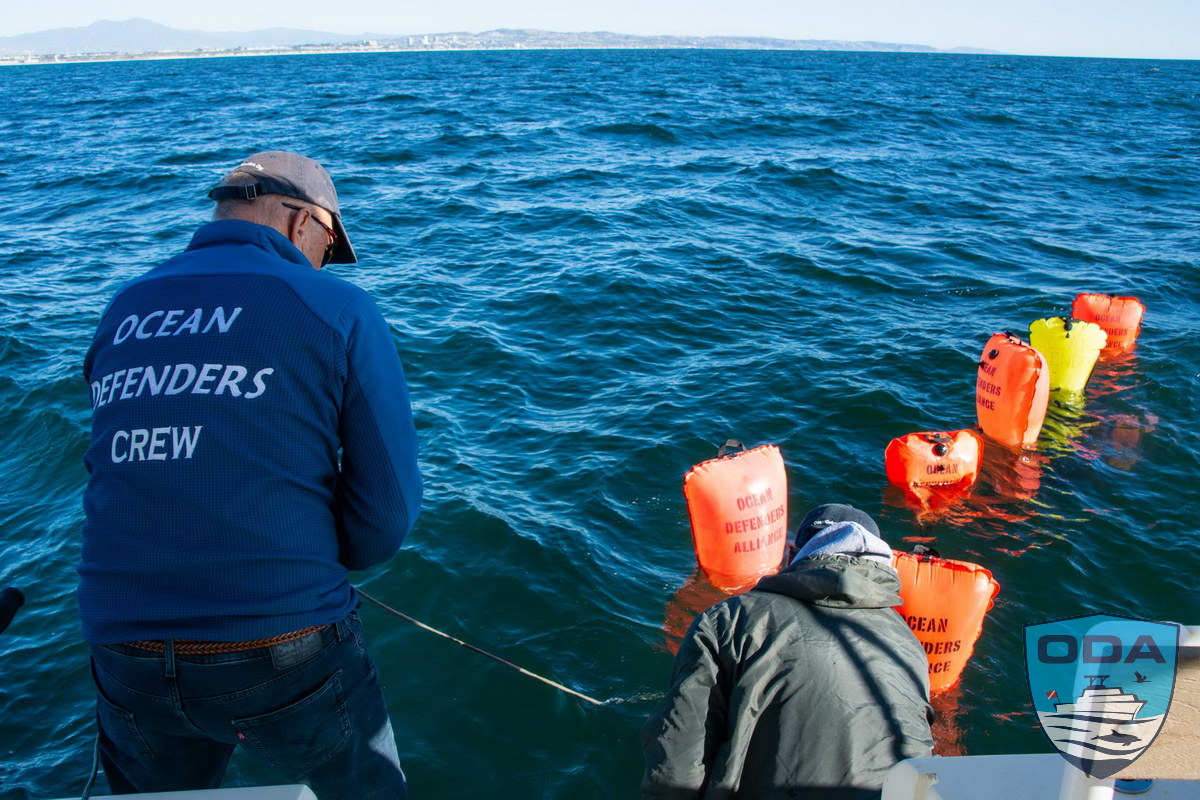 Dave and Jeff slowly hauled it onto the rear deck where they put the net in a trash can we had brought.  There was so much net that the trash can was overflowing.  But we kept piling it on until we had it all contained.  When I tried to move the can, it wouldn’t budge. 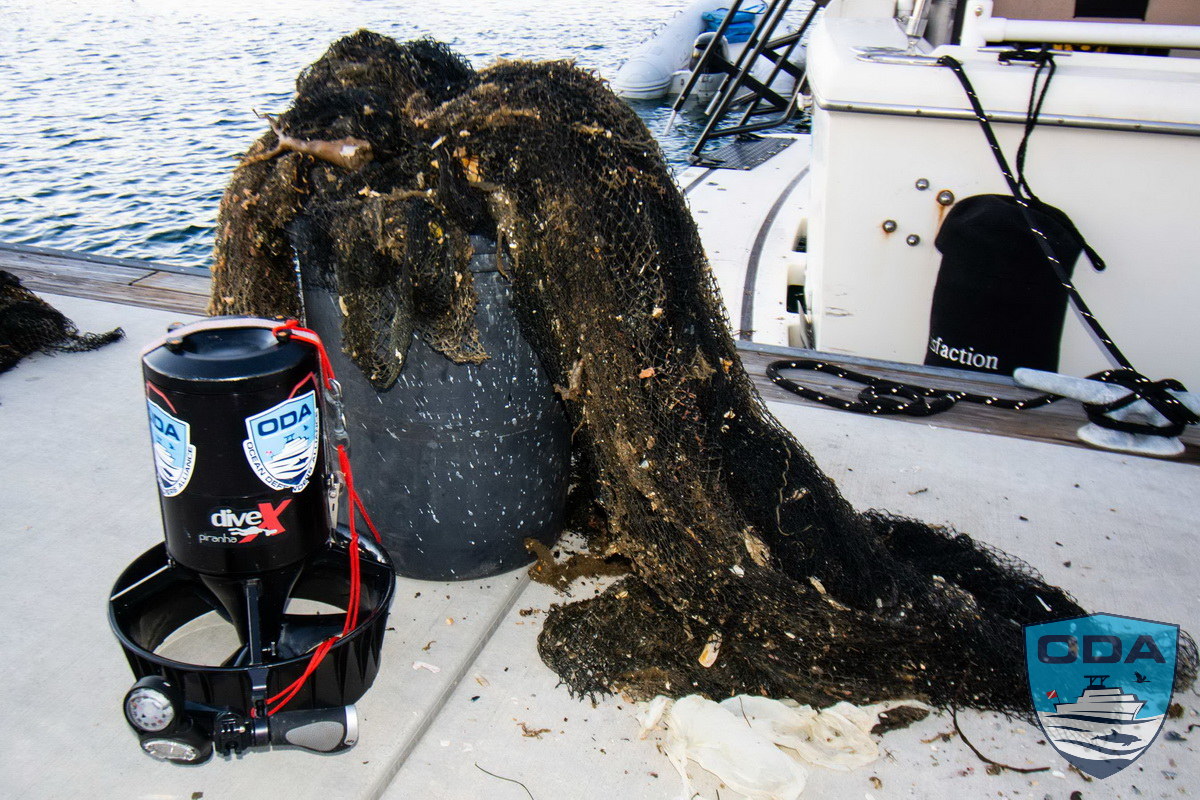 It was too heavy for one guy to move, so Jeff and Dave added their muscles.

We finally pulled up the anchor and headed home about 4 o’clock.  When we got back to the dock, the sun was setting.  Then we had the privilege of hauling the net to a dumpster, getting everyone’s gear off the boat, and then cleaning the messy boat.

Walter did his best to get some video to let people see the scope of the problem net.  As you will be able to see, the underwater vis made for some trying dive conditions.  Thanks Walter!  Without your video, we wouldn’t have any idea why Mike was complaining about not being able to see anything.  Now we can see for ourselves.  Hard to see your hand while it’s got a sharp knife flailing away while cutting the net!

Bill Maley took a lot of these still pictures, AND he helped haul the trap and the net out of the ocean and onto the boat.

Sue, as usual, did a great job of handling the RIB.  It is not easy steering that boat in reverse while dragging hundreds of pounds of net. 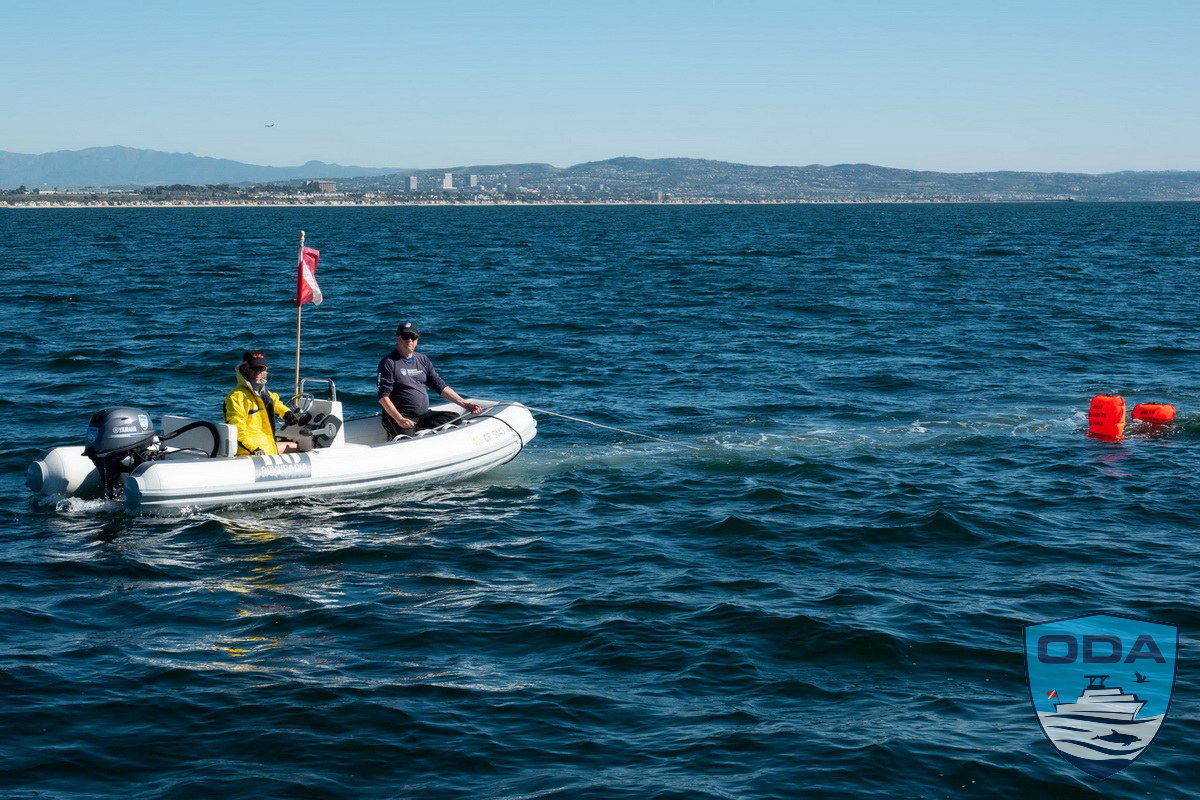 It was a great day to be out on the water, the seas were completely flat on our way down to the site at Huntington, which was a 12-mile jaunt.  Going back home there was some strong wind in our face, so we took it slower at about 12 mph.

In all, we removed the lobster trap and the squid net which weighed between 250 to 300 pounds.  It took three of us just to lift it off the boat and onto the dock!  Oh, my back… 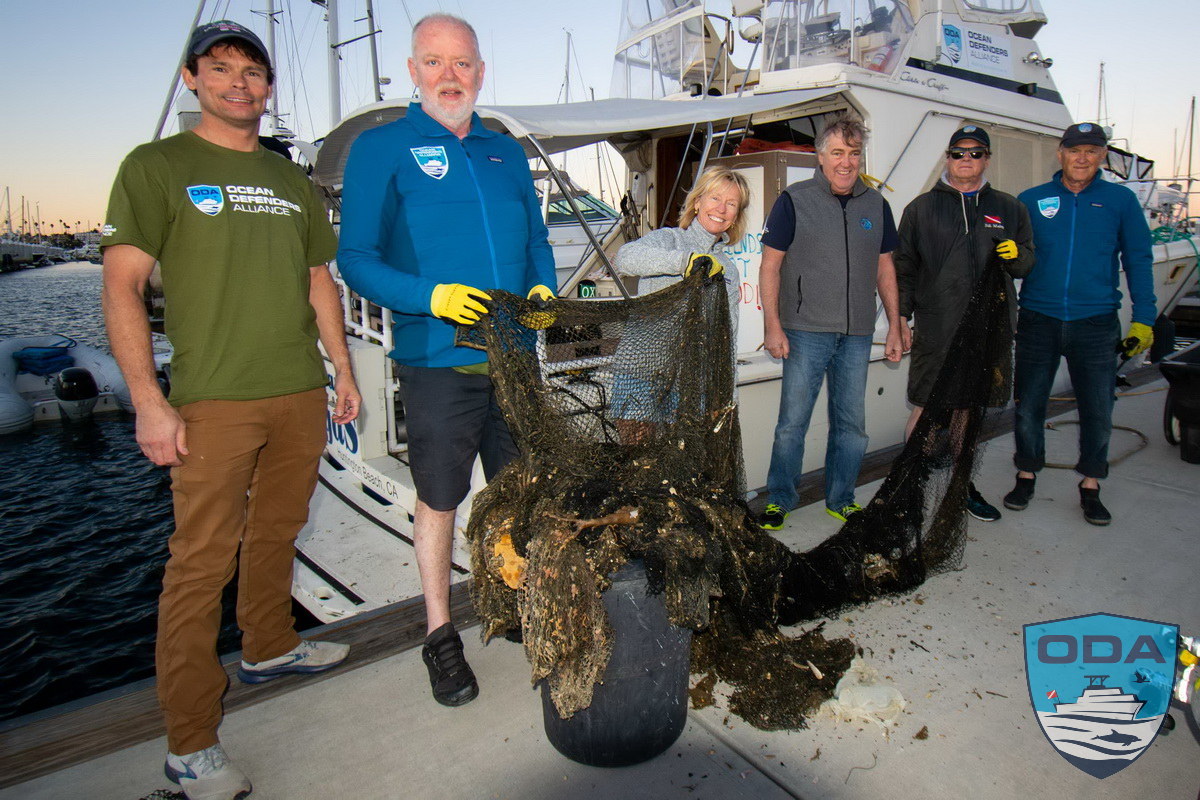 Thanks to everyone who made this a stellar day in the ODA catalog.

Kim, Jeff, Craig, Bill, Walter, Dave, Sue, Geoff and Mike, I can’t think of better people to spend the day with! The oceans are fortunate to have you as defenders!

If you'd like to be part of the physical crew who removes debris or you'd like to do your part from home, we welcome your partnership! Check out our Volunteer Page and/or visit our Donation Page. Thanks so much!