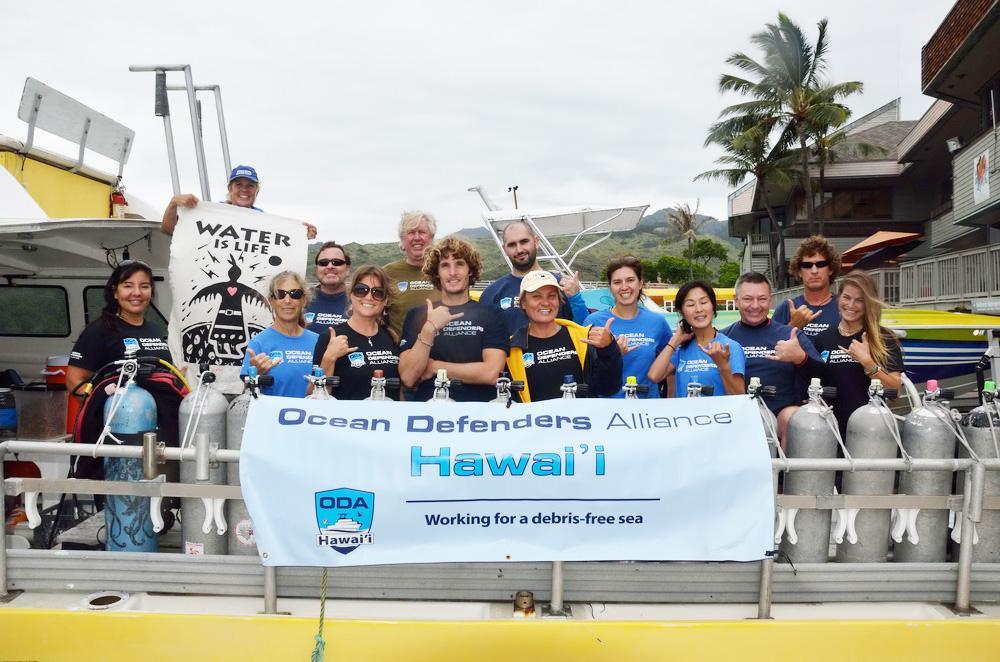 Coastal waters everywhere need the help of Ocean Defenders Alliance (ODA) and our debris cleanup crew, so we have been super excited to expand our work into the waters of Hawai’i.

In the recent past, ODA had attempted two underwater cleanups on Oahu, but each was thwarted by big surf. Sometimes our best-laid plans are nixed by Mother Nature!

Before leaving for Hawai’i, I made arrangements with Matt Zimmerman, who owns Island Divers Hawai’i, to charter one of his boats for a day to take some volunteer divers out to do an underwater cleanup. One of the scuba instructors who works there, Mary Christensen, has organized these kinds of cleanups before and welcomed the idea to get more people cleaning up a dive site called China Wall. It is near a boat harbor called Hawai’i Kai. That's me, Mary, and Matt in the pic below! 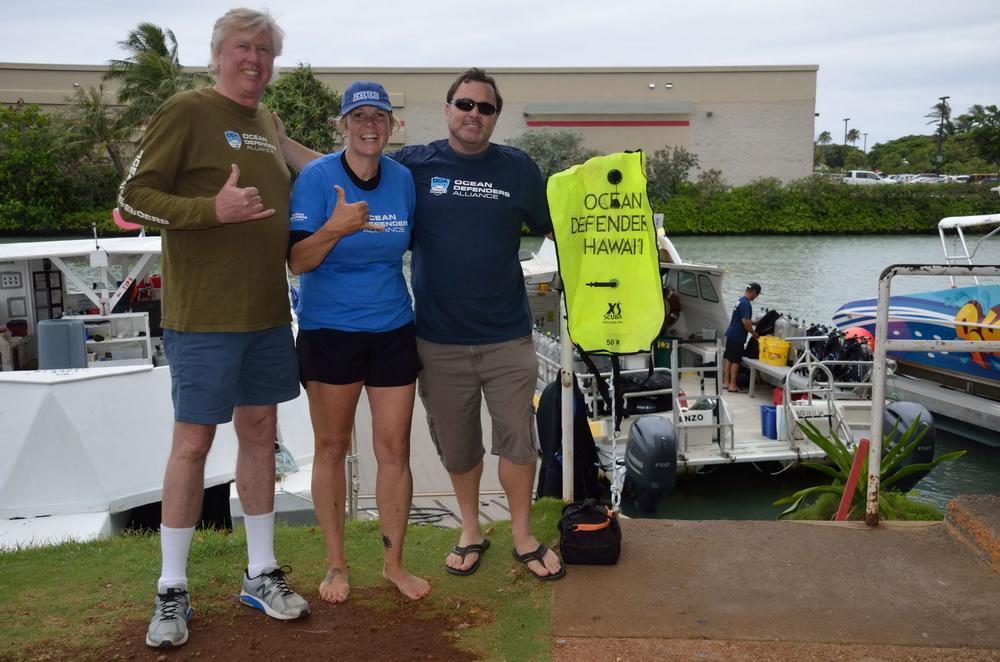 ODA Advisory Board Members Vicki Szymczak and Mash Hatai both live on the island and had rounded up several people to go out for this trip. As we gathered at the dive shop on Saturday afternoon, it was raining and a good wind was blowing. NOT a good sign… It was bad on the water too, with 6-foot surf around China Wall.

So, we were forced to change course—there is no way to dive safely in these conditions. Instead of doing a cleanup, we took eight divers out to an area that wasn’t getting pounded by big waves to go over the fundamentals of how to safely remove debris underwater and get that nasty stuff to the surface. 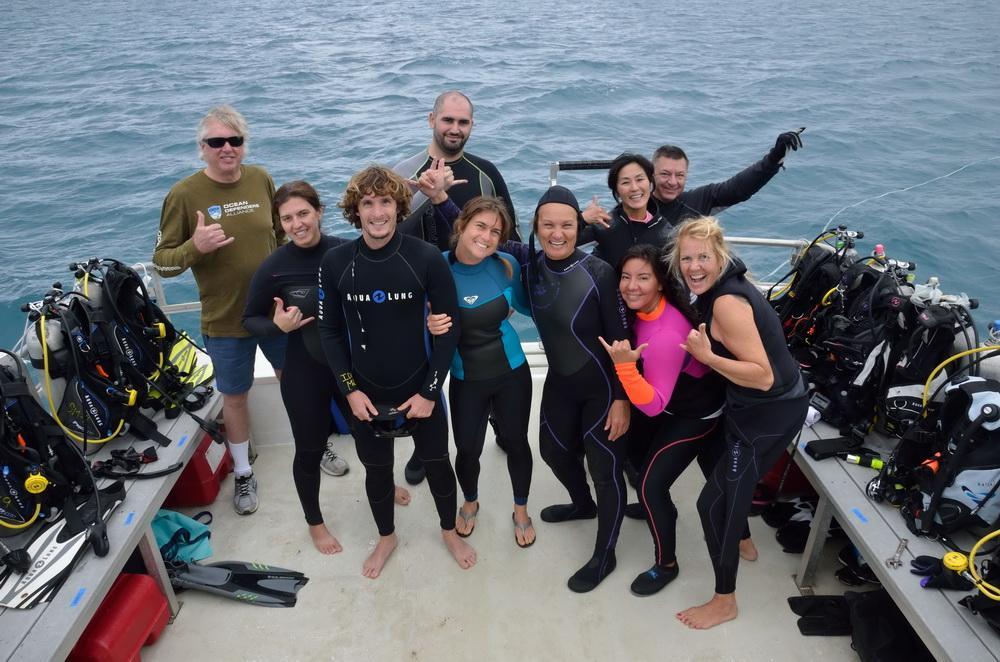 The divers were: Vicki Szymczak, Dominique Boeuf, Kelle Freel, Olivier Poiriou, Sarah-Jeanne Royer, Fusayo Wilchek, and Scott Wilchek. Leading the dive was Mary and her husband, John. Filling out the ODA crew was AJ Jaeger, who took all the topside pictures.

While conditions weren’t ideal and visibility was around 15 feet, everyone had a good time. The team got comfortable doing the work, AND they got to see some of the wonderful wildlife that we focus on saving. Thank you, Dominique for taking the underwater shots! 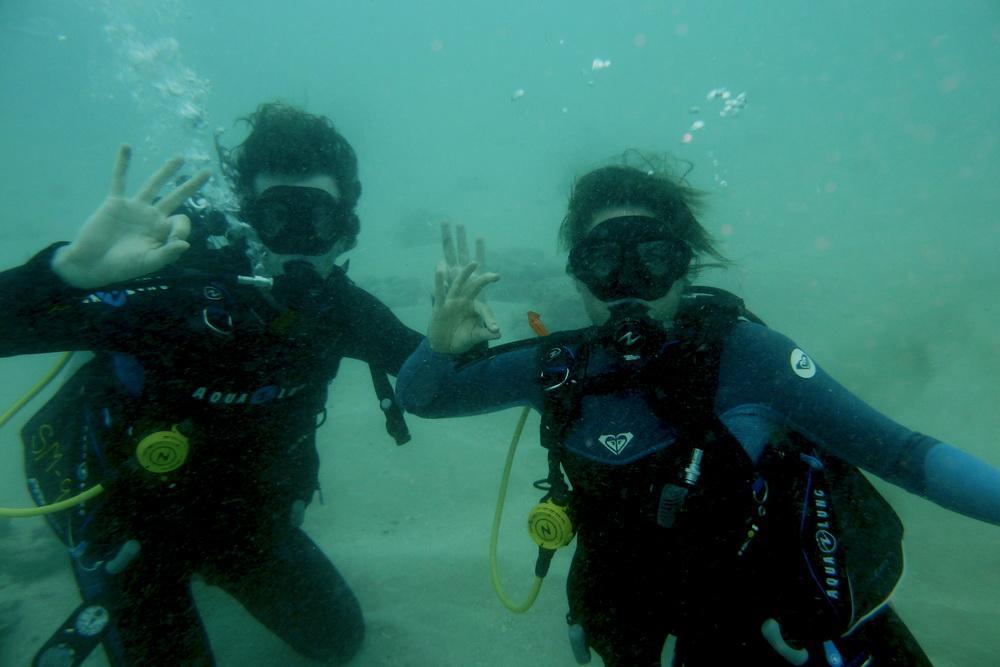 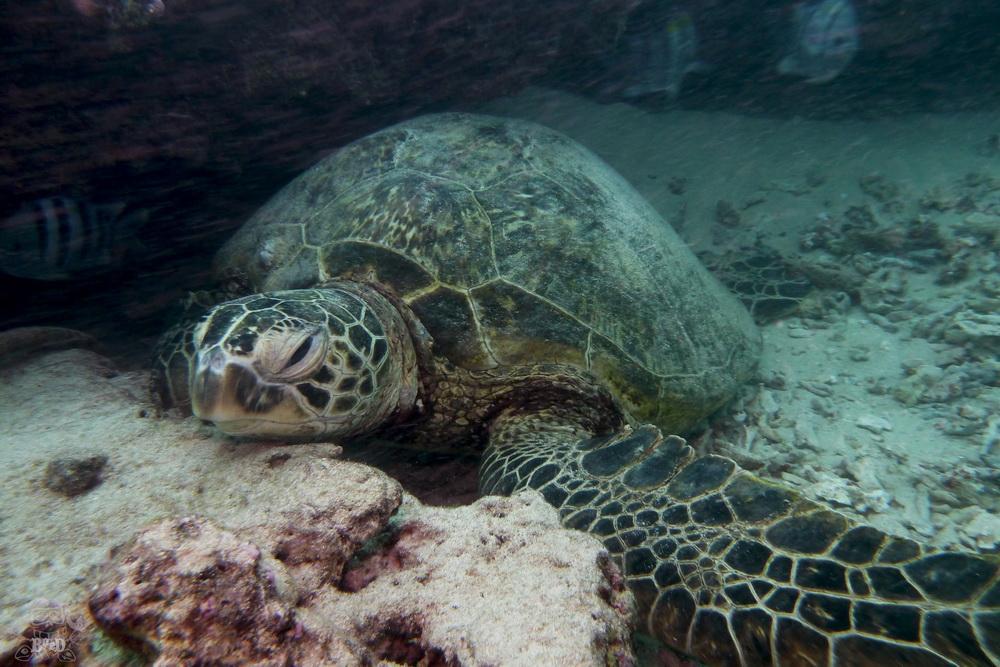 When we got back to the dive shop, Matt, Mary, and I created a plan to do one of these cleanup dives each month. You can now see it on our online calendar, and can make plans to come out with us based on those dates. If you want to attend any of these, you’ll need to contact Vicki ahead of time (email her at ), complete our Volunteer forms, and get your name on the roster. Come on out! 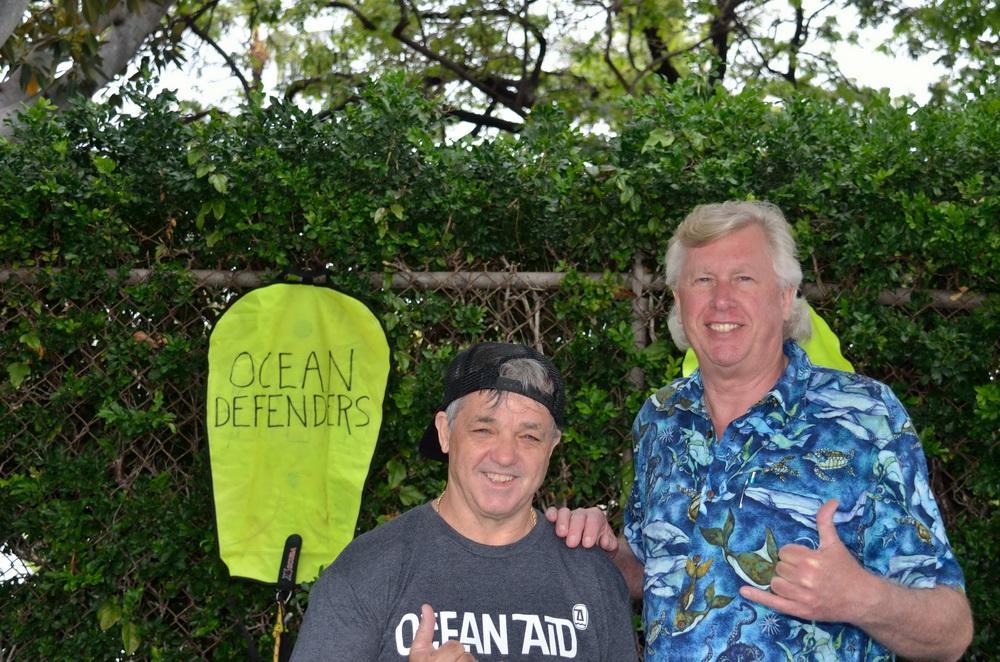 The following day, Sunday April 30th, a concert was held in Waikiki. This was a 6-hour concert featuring many bands, and the theme was ocean conservation and PLASTIC FREE! One of the main organizers behind the event was Bill Wyland, who promoted ODA to the staff of the event. Thanks Bill! [That's Bill and I to the left!]

ODA was invited to have an information booth there. I was also asked to get up on stage and present an award to Sylvia Earle for her outstanding work in raising awareness—not just the decline of the marine environment, but what we can do as individuals to help restore some of those areas. Since Sylvia couldn’t be there, Hannah Bernard accepted it in her honor.

This concert was broadcast live on local television, and it was run by the staff with precision. I got to talk with a lot of people about ODA and how we are working to cleanup some of the coral reefs around Oahu. Ray Hollowell and Patti Mitchell from Sea Inspiration (formerly known as PlanSEA.org) were there as well, and Ray took these pictures from that day. 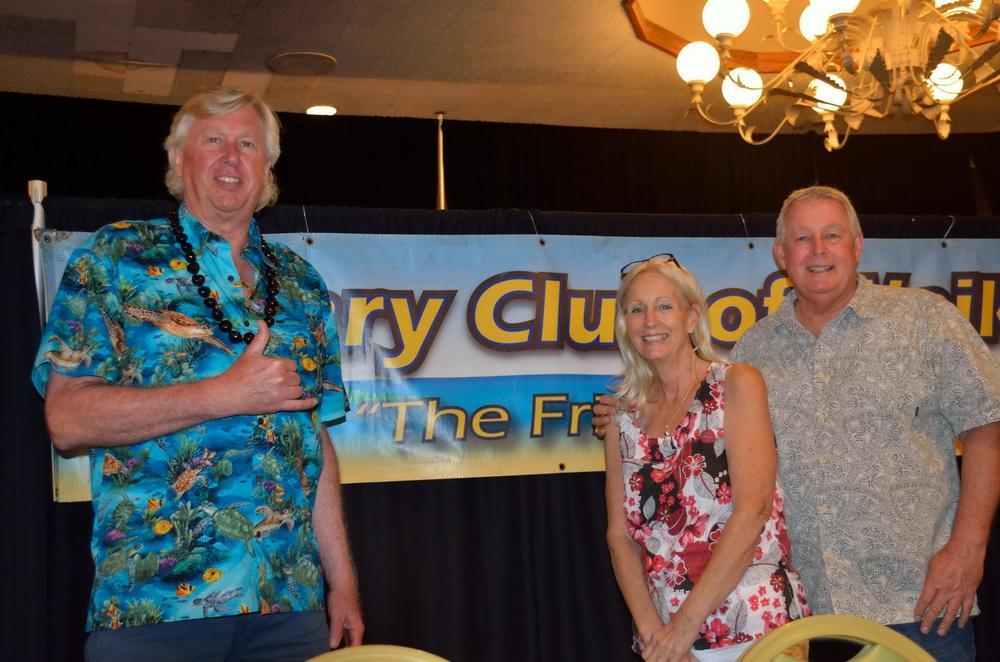 Patti Mitchell is involved with the Honolulu Rotary Club, and she got me invited to give a presentation to their members on Wednesday, May 3rd.[To the right: That's Patti Mitchell and Ray Hollowell of the Honolulu-based nonprofit organization Sea Inspiration - thanks, guys!]

It was fun to talk to these people who are VERY involved in the civic activities of the local community. About 50 people attended.

After my talk, several people spoke with me about how they might be able to help out. One young guy is a dive instructor and does a lot of work with military veterans. 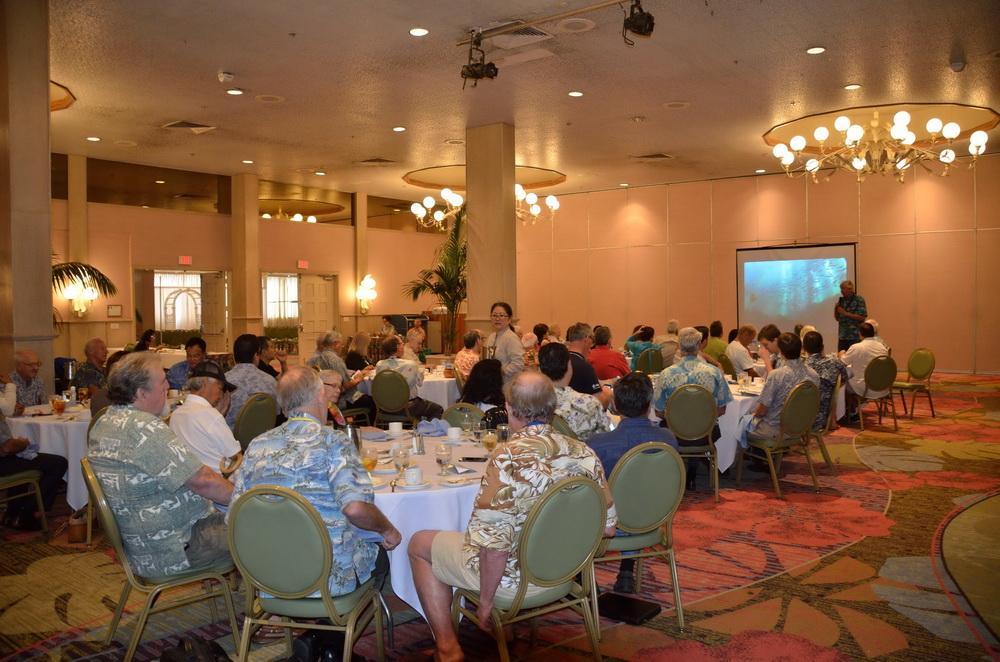 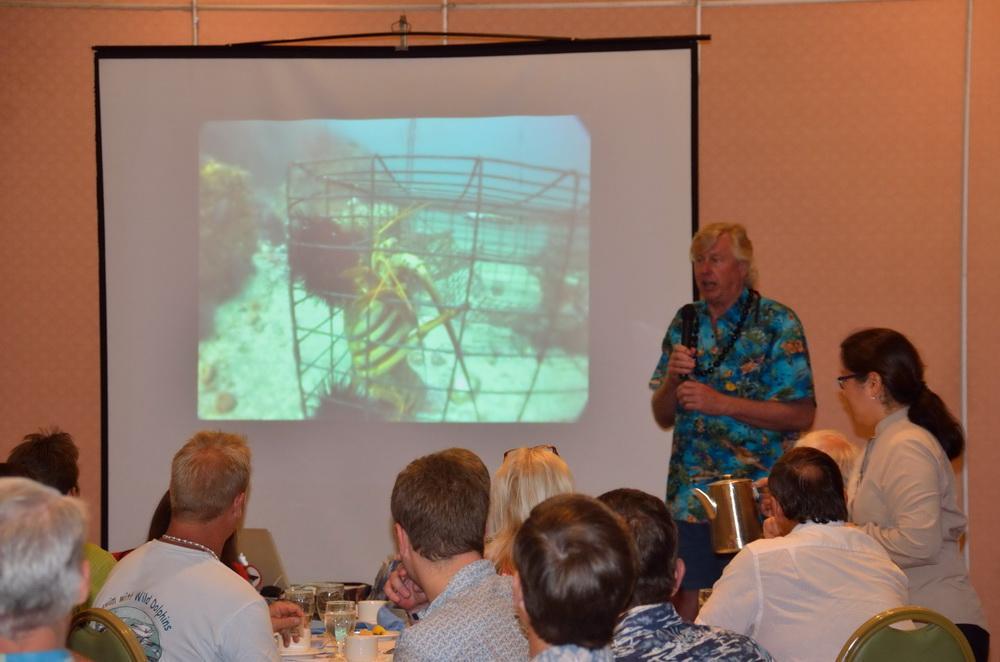 Another guy, Dave Meyer, wanted to let me know that he removes plastic from the beaches where he lives…which happens to be on the island of Bermuda (something like 7,000 miles away from Hawai’i!). He just happened to be on Oahu for a vacation and was pulling up plastics from the sands on Hanauma Bay, a Marine Protected Area. 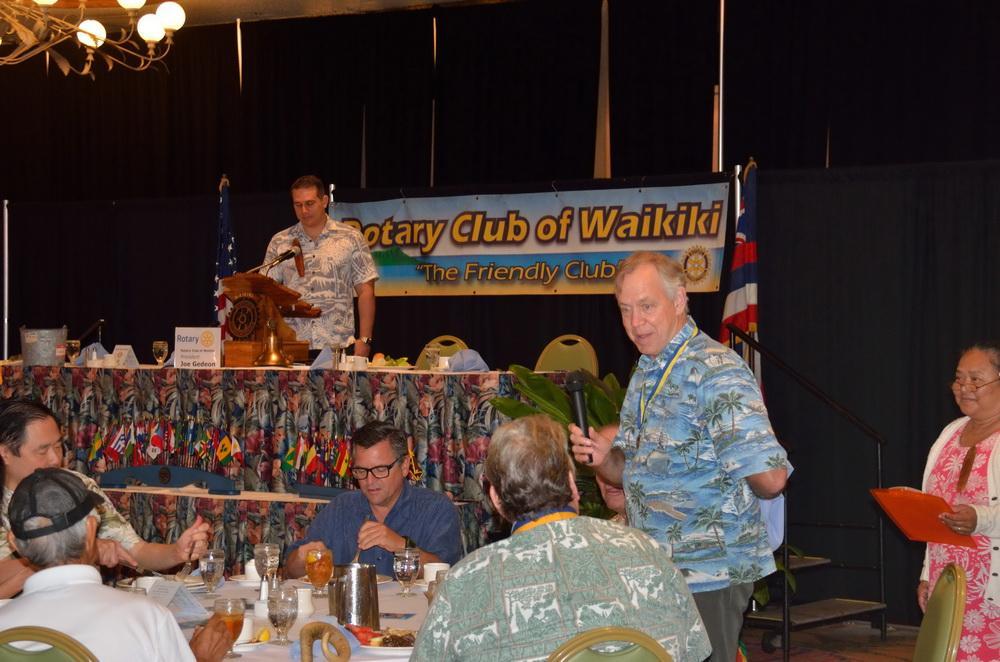 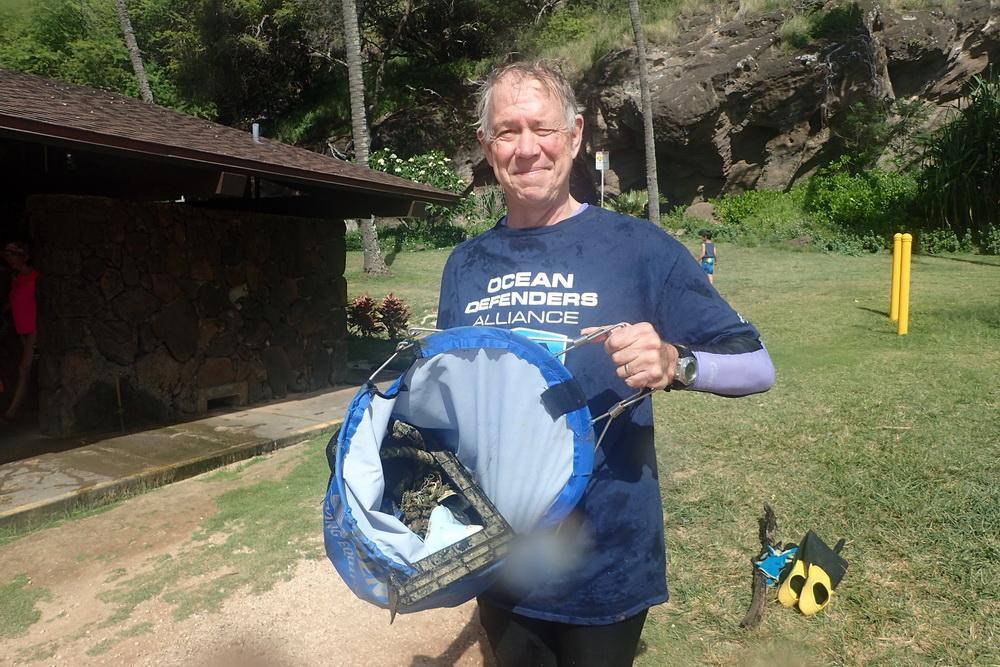 Dave was wondering if I had any mesh bags that I could loan him to make removing these plastics any easier. I just so happened to have two of them with me. I gave him both bags, and he sent me a picture the very next day of some stuff he pulled out. He left one bag with a lady who lives there and cleans the beach there about five times a week. He took the other one back home with him to Bermuda, where he will continue sending pictures of the stuff he removes there. Way to go Dave! 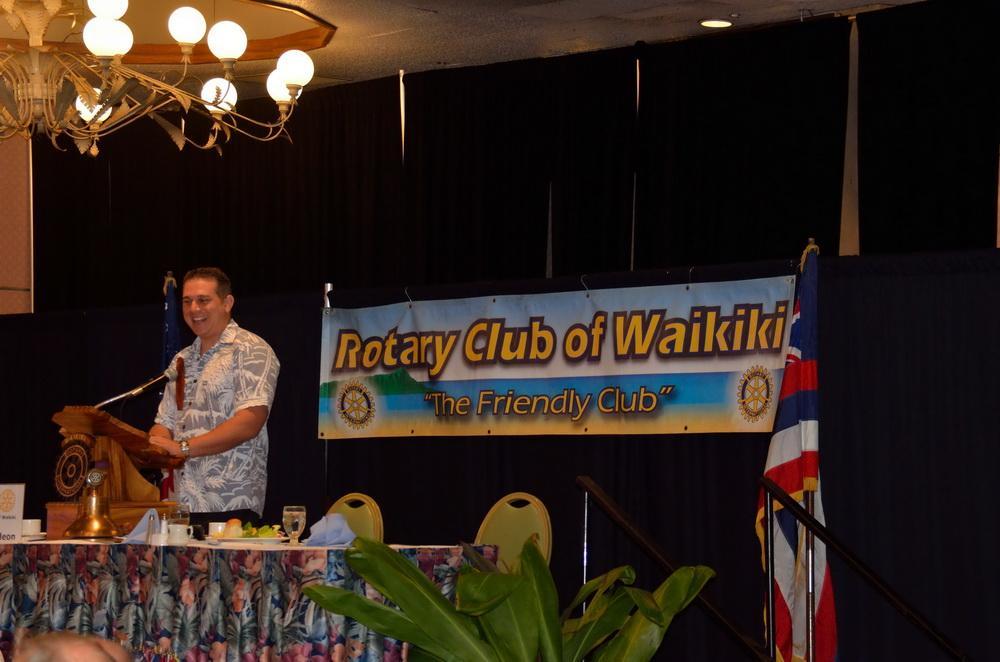 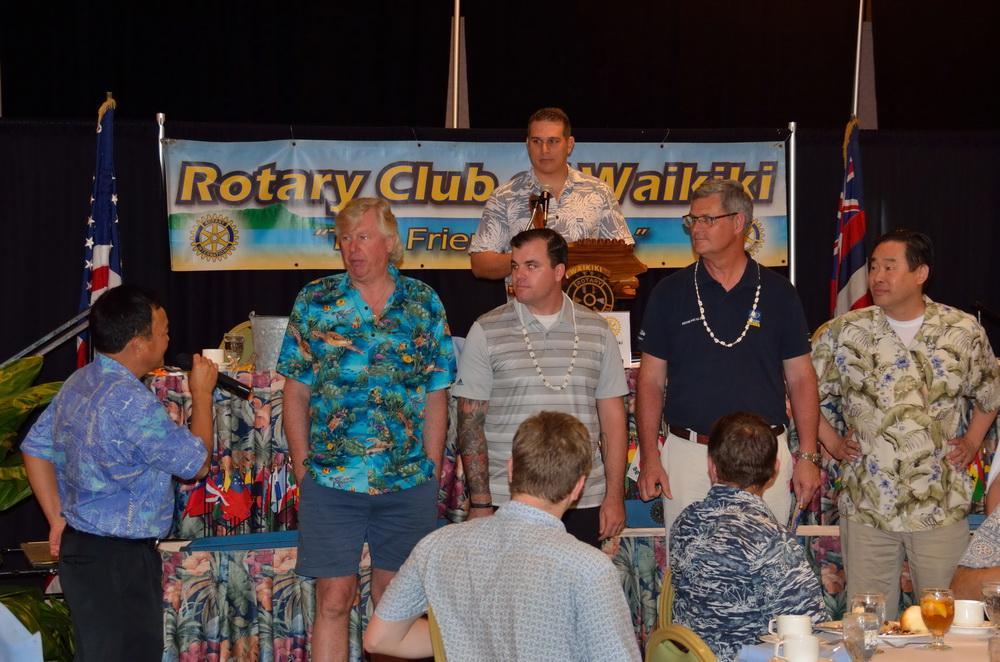 Oahu is known the world over for its white sandy beaches and friendly atmosphere. I can attest that both are richly deserved. I had a wonderful time, but was dismayed by the amount of plastic in and around the water. ODA’s Hawai’i chapter will have its hands full trying to remove it from the beaches, and more importantly—preventing it from reaching the water in the first place.

Stay tuned to find out more about this exciting development in ODA! If you want to support this important work in Hawai’i, you can be part of it by making a donation and writing the word “Hawaii” in the comment box. Mahalo! (Thank you!)