I traveled to Oahu on Friday the 13th to tend to various business with our ODA-Hawai’i chapter and take part in our monthly debris-removal dive with our partner Island Divers.

ODA Links Up with Ocean Researcher

One of my first appointments was a meeting with a research scientist by the name of Nikolai Maximenko. He studies ocean currents at the University of Hawai’i. His main focus right now is studying the plastic gyres. 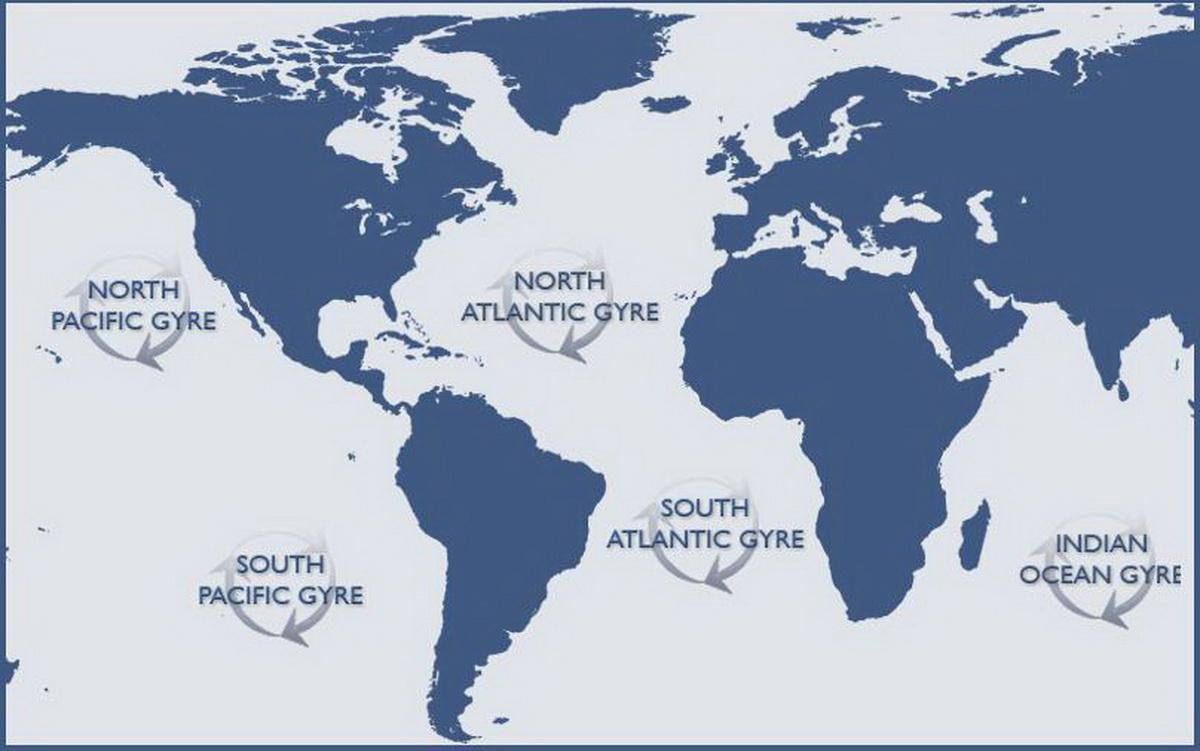 My goal in meeting with him was to see if there is anything ODA can do to help reduce the amount of plastics around Hawai'i. We had a great conversation, and I learned a ton more about how plastics are traveling around the world thanks to the dynamics of ocean currents. 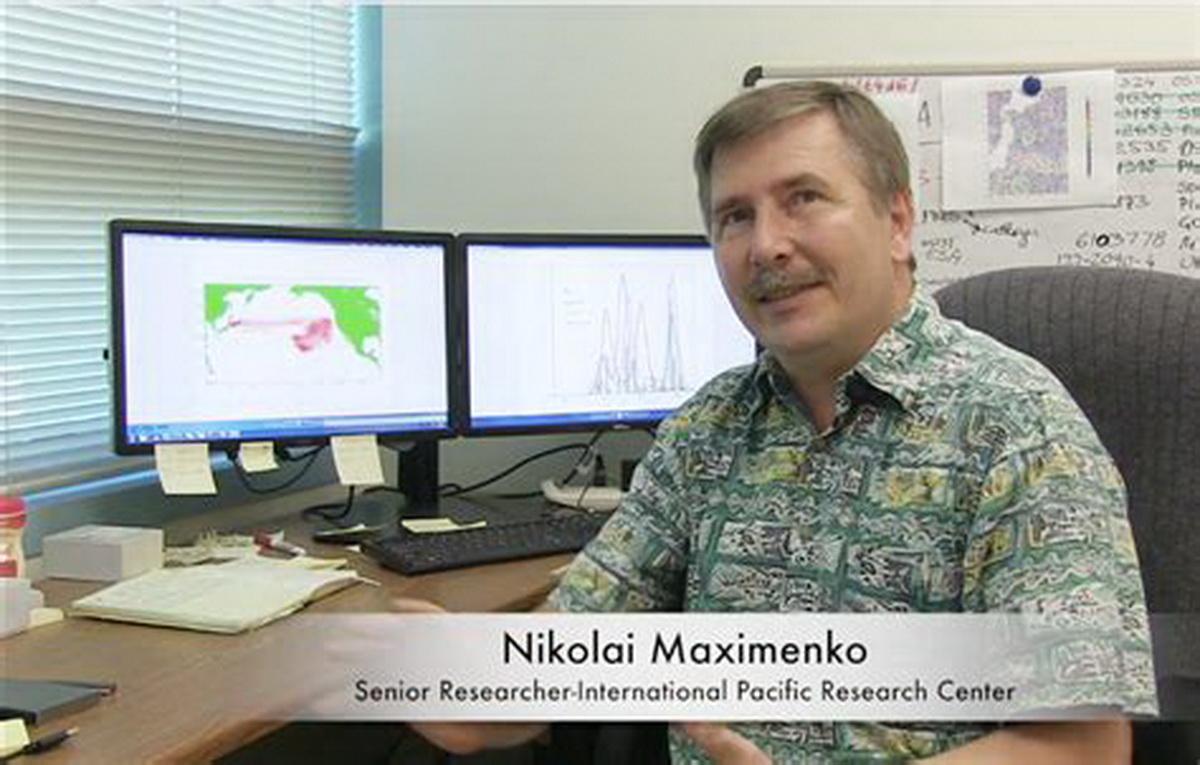 He took me to a different office to see some of the strange pieces of debris he and his team have collected over the years.

As we opened the door, I was pleasantly surprised to see one of ODA’s volunteers. Wholly mackerel, it was Sarah-Jeanne Royer! She has gone diving with us in Hawai’i several times. Turns out she has another life as well, one as a Post-Doctoral Research Fellow. Well you could have knocked me down with a feather… And to think she took time out of her life to go on an ODA dive is just humbling for me. Sarah-Jeanne is pictured below on an ODA debris-removal expedition. 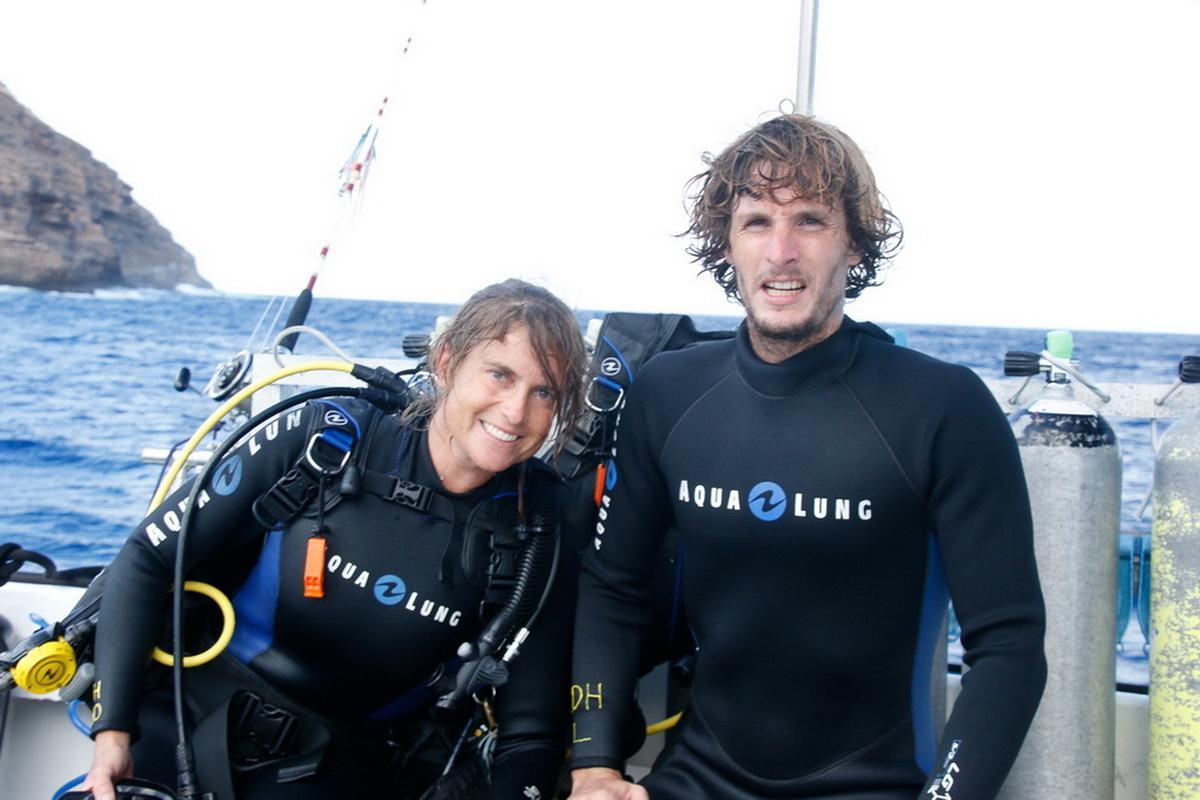 After our two-hour meeting, I got a call from one of ODA's most vocal advocates, AJ Jaeger. She told me that there was a massive pile of net in the surf zone of a place called Kailua Beach, on the east side of Oahu. So, off I headed to the far side of the island to see what could be done.

When I got there, it was raining really hard. But as soon as we saw the pile, all trepidation flew out the window. I know I sound strange to the majority of people, but seeing a massive pile of net gets the adrenaline pumping in my veins.

We saw five other people looking it over, with some kind of a beach buggy stuck up to its axles in the wet sand nearby. They had already removed some of the net and were trying to figure out how to get the buggy out. 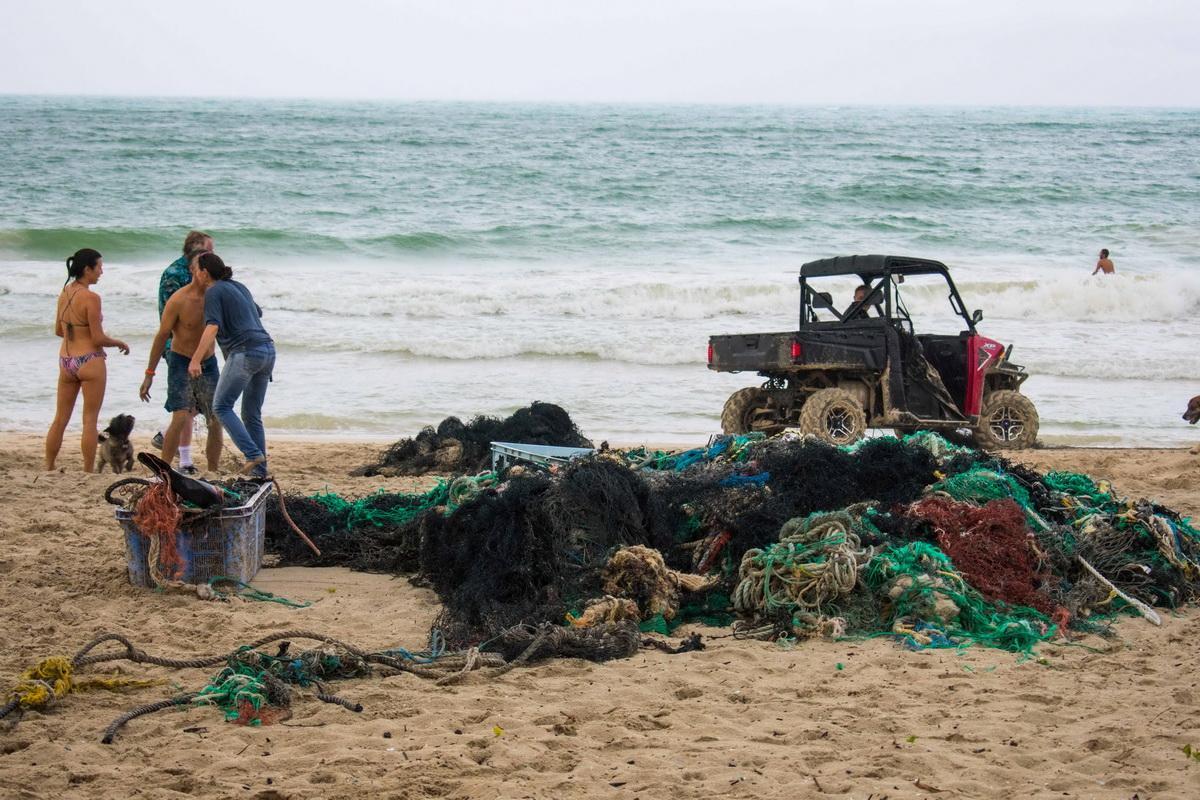 We eventually got that buggy unstuck, and then proceeded to put piles of the netting on the bed of the vehicle. It was like this contraption was specifically designed for this job. I found out it is a Polaris, owned by Todd Branson. Very cool (and helpful), Todd!

After we introduced ourselves, we found out that one of the gals, Lianne Cameron, volunteers for 808Cleanups, which is a nonprofit that conducts decentralized cleanups all over Hawai’i. We had a nice chat and exchanged ideas on what has worked best for each one of us in the past. I have a good feeling that we will work together again.

Since ODA has started working on these beautiful islands, I’ve seen some pretty sobering amounts of nets and plastics. Keep in mind also that most of these nets are made out of plastic as well. But to see these piles on an idyllic sandy beach was really disturbing.

With me were two ODA volunteers: AJ Jaeger and her husband Keith. Together, all eight of us spent the next hour-and-a-half cutting nets like crazy to reduce the weight and volume so it would be easier to lift the debris on to the truck bed. Fortunately, AJ and I had brought the special knives we use for cutting nets when we do our underwater debris removal. They are small pocket knives but have serrated edges that cut through nets and lines quickly, and proved to be just what we needed to get the job done. 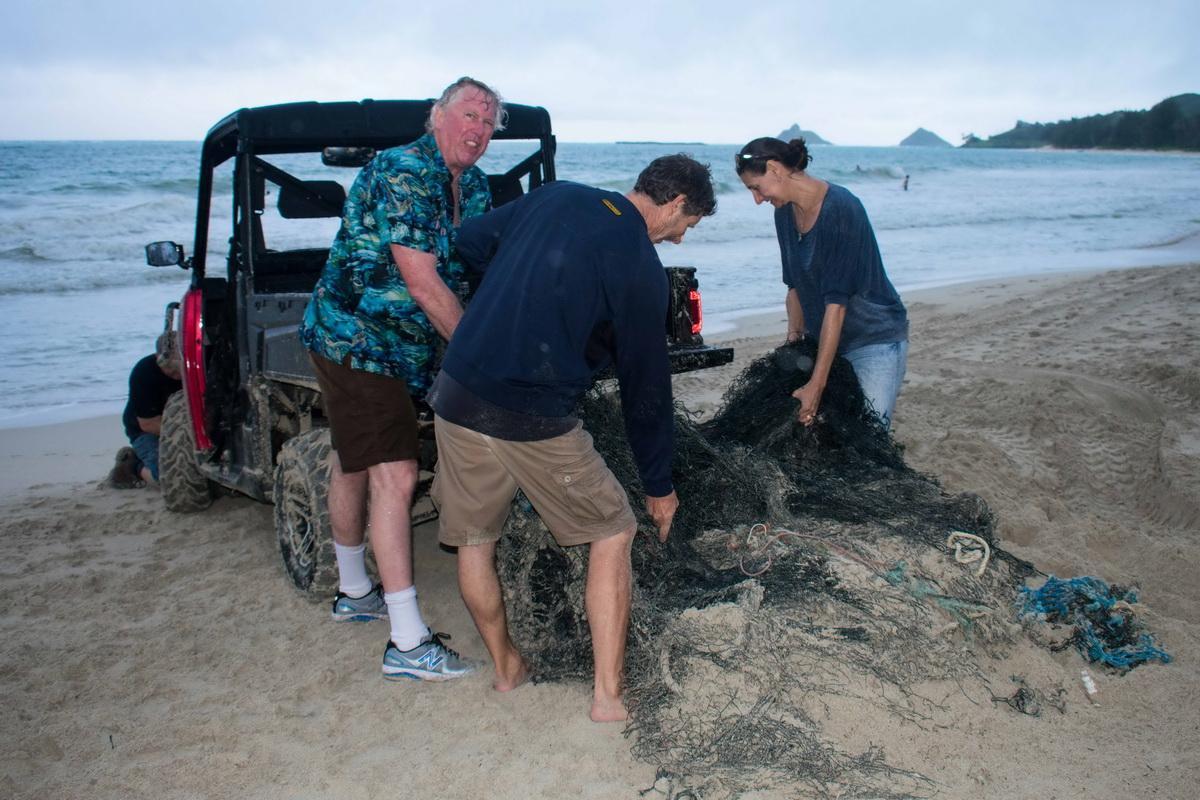 Once we had a pile on the truck bed, they hauled if off to a staging area where another organization will pick it up, and then send it off to be used to create steam energy.

We were able to haul out two of the piles. Each one had to weigh at least 800 pounds. But as night was setting in, there was one more pile still on the sand. Everyone’s hands, legs, and necks (not to mention, everything in between), were hurting. So, we all agreed to call it a night and bid adieu. 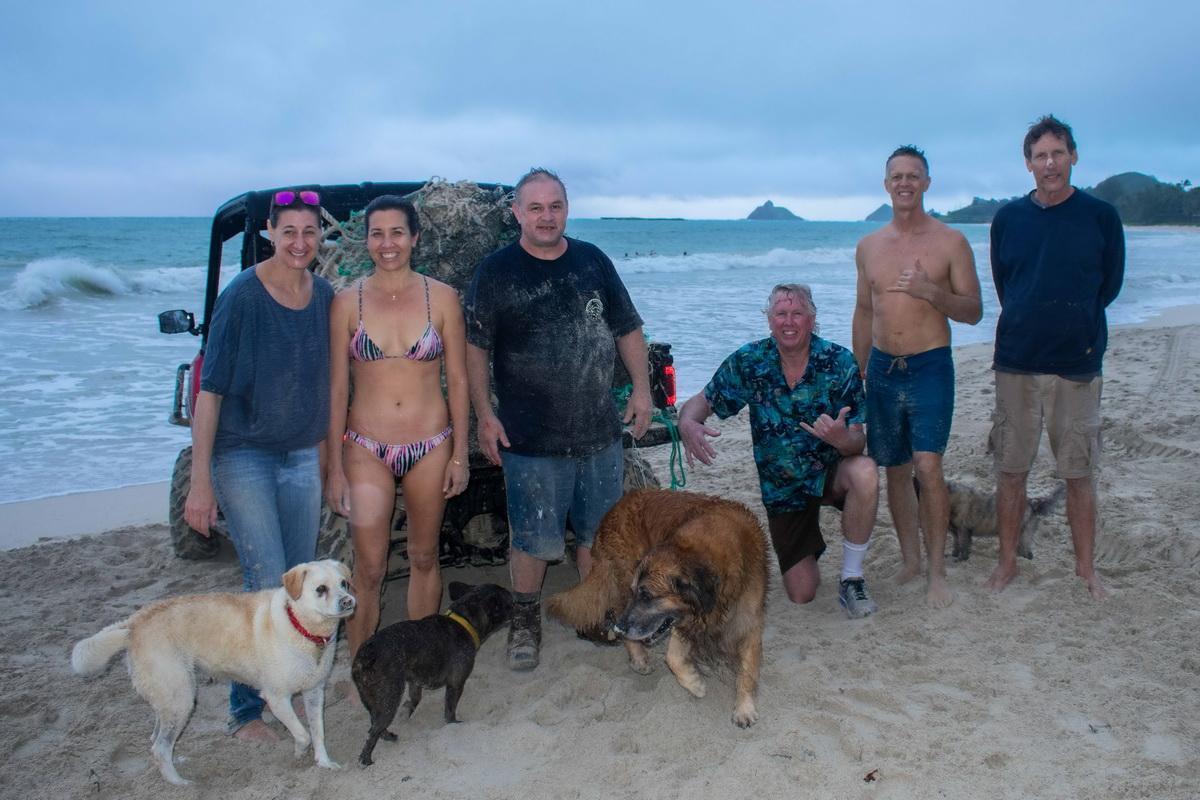 That night a strong tropical storm overran the island. There was lightning, thunder and sheets of rain. I had taken a walk to get some dinner when it really hit. I got soaked, again… and the wind was so strong it blew my glasses off my face.

I saw on the news Saturday morning that a lot of the low-lying areas around Oahu got flooded. Roads were closed and houses inundated with mud. Several trees were stuck by the lightning.

I had come here to go out on another one of ODA’s monthly dives with Island Diver Hawai’i, which was scheduled for this day. Well, you can say it got washed out. I hope no one got hurt during the storm.

So, we quickly moved to plan B. I called volunteers Ray Hollowell of Sea Inspiration, Ken Staples, and AJ to see if they wanted to meet me back at Kailua Beach. I wanted to get some more documentation on the net and the remaining plastic debris that was embedded in it.

They agreed, and we met at the pile to look around for signs that might indicate where these nets are coming from. We did find some pieces of plastic that had writing on them. So we took a few pictures and will send them to Nikolai with the hope that maybe he can help trace it back to the source.

When we had finished that search, we grabbed our knives and started cutting the remaining pile into smaller pieces, knowing that Lianne and Todd were going to be back soon with his net-pulling jalopy. 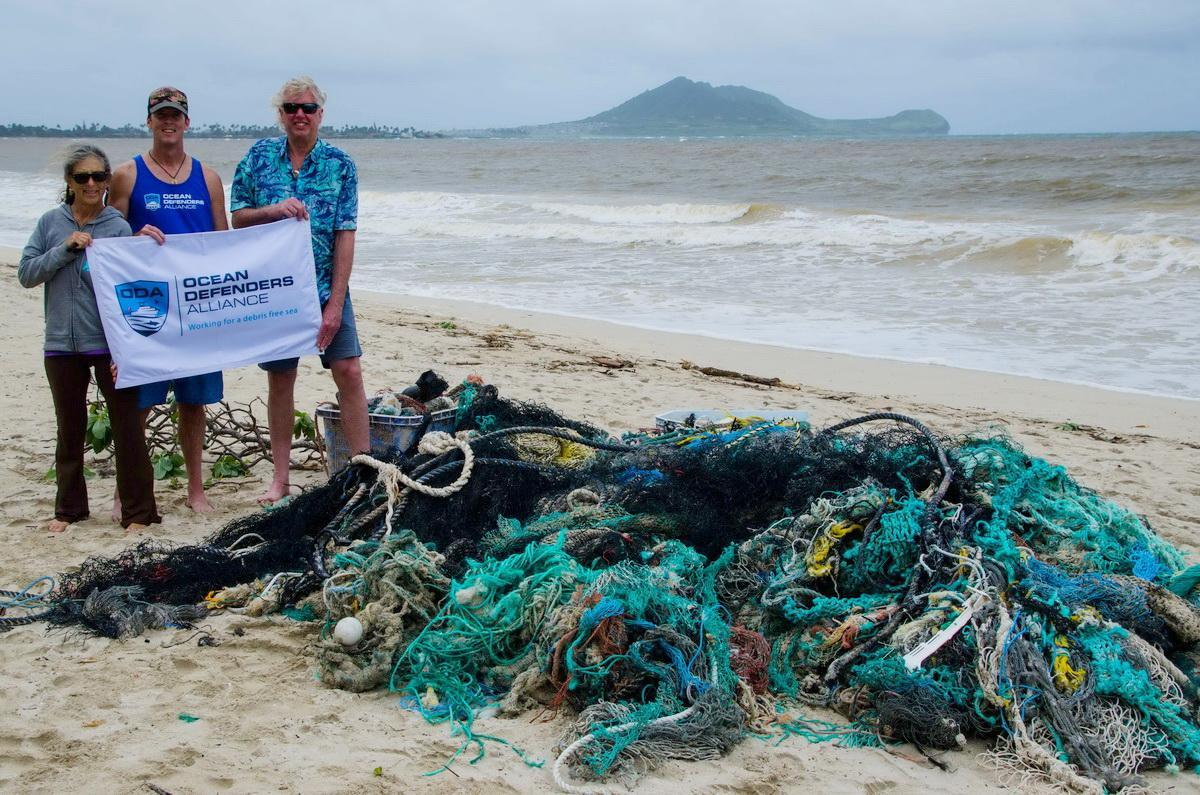 In all, I would say we removed well over 1500 pounds of nets. And as you can see from these pictures, this is an accumulation of dozens of nets. This is exactly the type of marine debris that entangles a range of wildlife, from sea turtles, to dolphins, to whales and fish. The only thing to escape entanglement from these nets, are the profits of the fishermen.

Your donation will help keep efforts like this going! When you make a financial contribution, you ARE part of the ODA Debris Removal Team!