Passion for the Ocean Fuels Big Cleanup at He’eia Pier

It was 6:30am Sunday, February 6, 2022.  Darkness still covered the pier and there was a slight chill to the Hawaiian morning.

But already He’eia Boat Harbor Pier was busy with activity.

Tanks and dive gear, DPVs (diver propulsion vehicles), ropes, tent, dive flags, banners, and t-shirts were all being hauled out of cars as more and more Ocean Defenders Alliance (ODA) volunteers showed up.

Finally, everything including hauling lines were in place and after a briefing by Oahu Dive Team Coordinator Glenn Roberts and me, 17 divers and four surface safety swimmers jumped in the water. 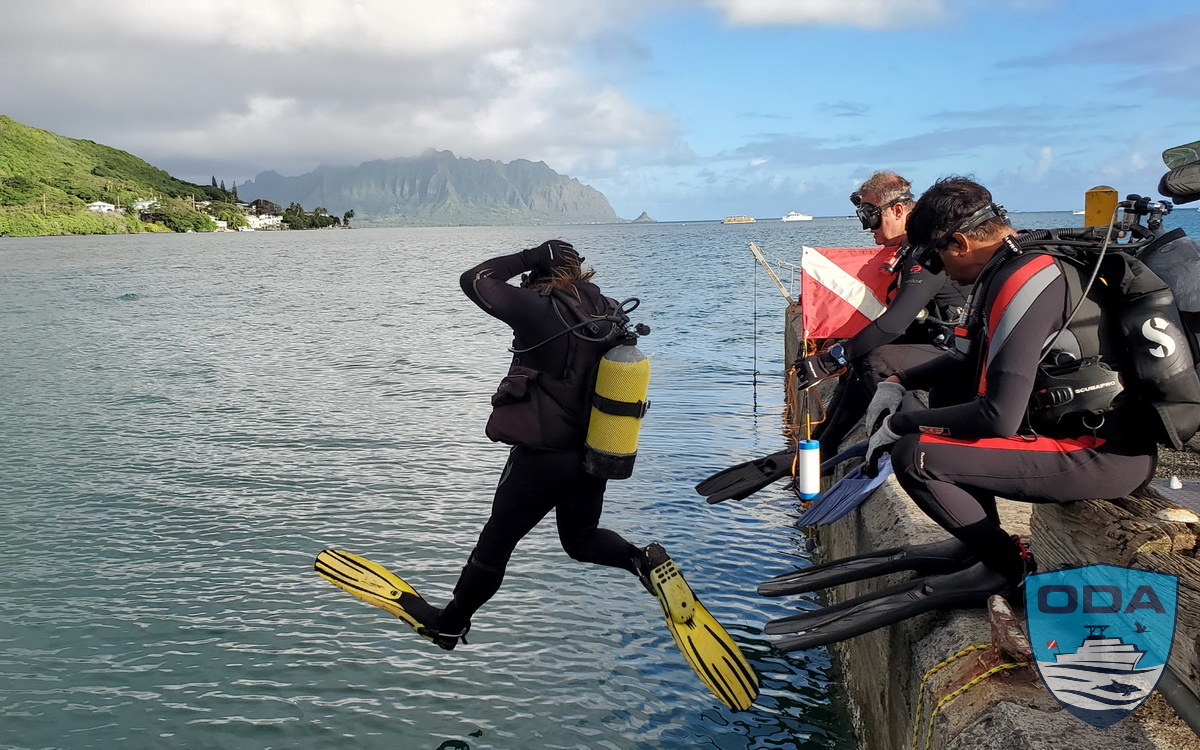 Within minutes, the 16 ODA volunteers on the pier were scurrying as divers shouted for lines.  Tires, big tires, and a couple of HUGE tires were immediately attached to the lines and ODA’s pier volunteers started hauling and hosing down the mucky tires, dumping mud, and checking for any “hitchhikers” that needed to be back in their ocean home. 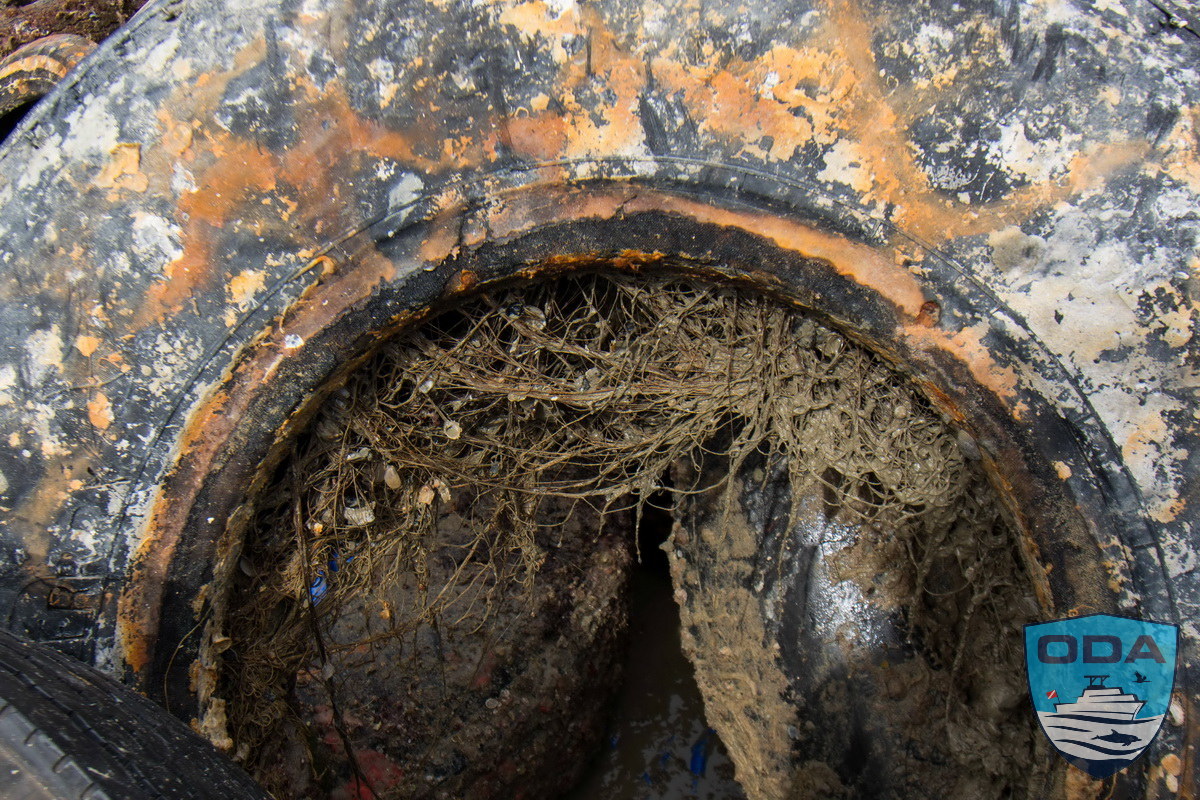 As you can see here, some of these tires had hundreds, if not a thousand feet of fishing lines enmeshed inside the tire wells.  These are spots where all kinds of critters like to hide out.

We found, and set free, two eels and one really large crab. 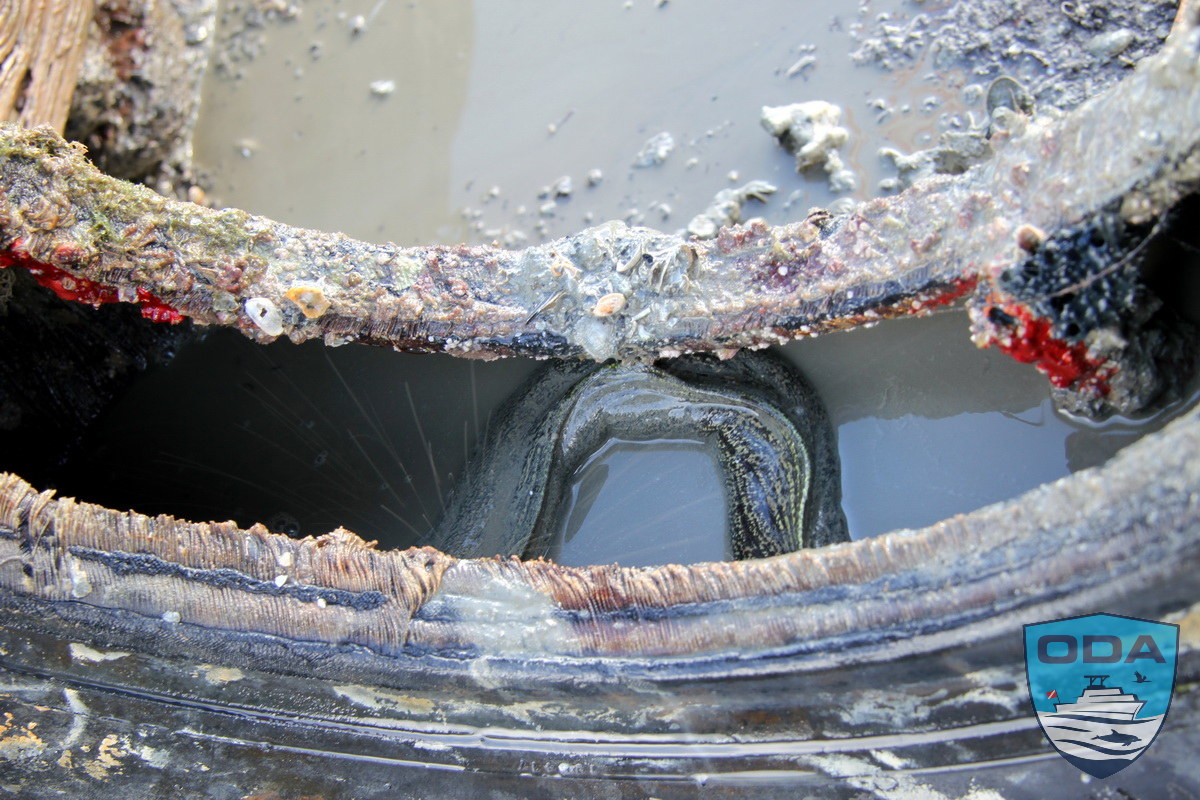 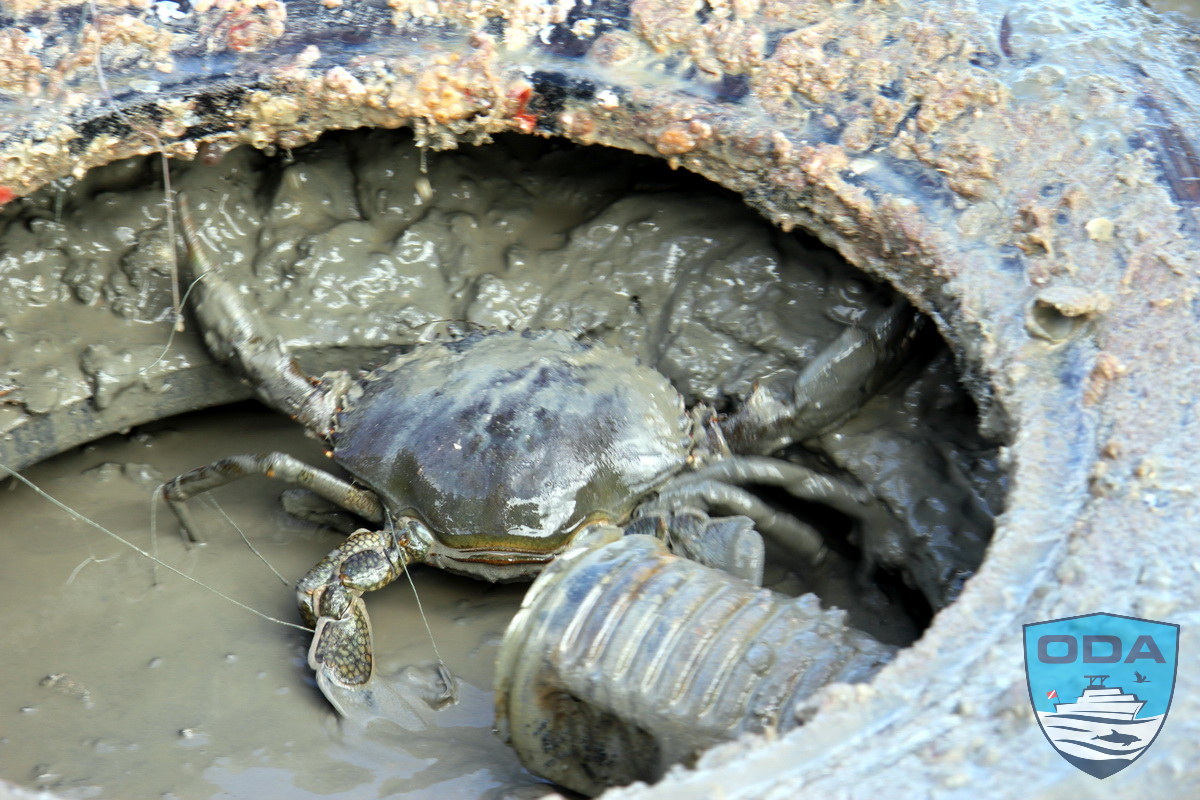 For the next two hours this was the scene:  scurrying, pulling, more pulling, yelling for more line, muscles burning, and cheers of success!  The pile grew to 61 massive tires, many masks and snorkels, fishing poles, and an assortment of other trash. 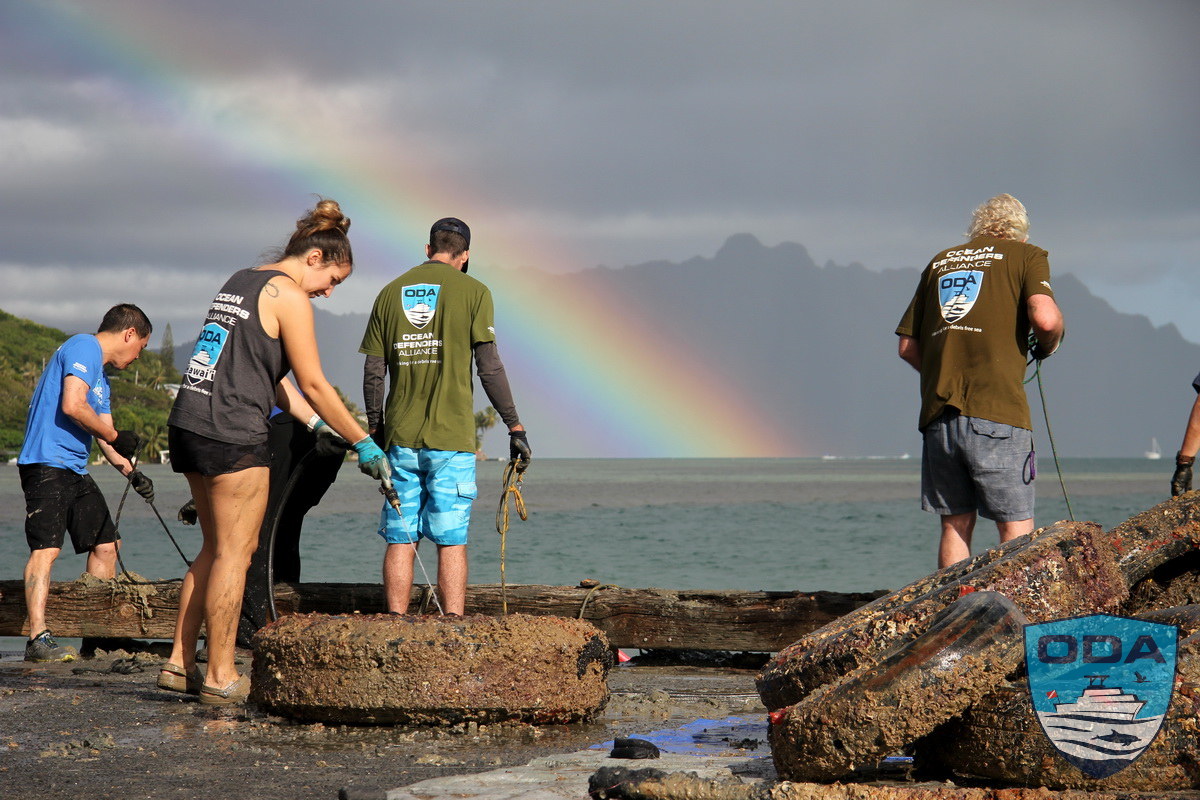 The biggest relief of the day was when two Aloha Junkman trucks pulled down to the end of the pier!  Matt and Luke jumped out of the trucks like the heroes they are and after a brief inspection, they got to work, loading their trucks.  Within a short time, the 61 tires were loaded.  What an incredible job, guys!  But what was really noticeable was the heart that these two guys have for their community and their immediate willingness to come out and give of their time and trucks so that all those tires could be taken to H-Power where they incinerate the tires and convert that heat into electricity. 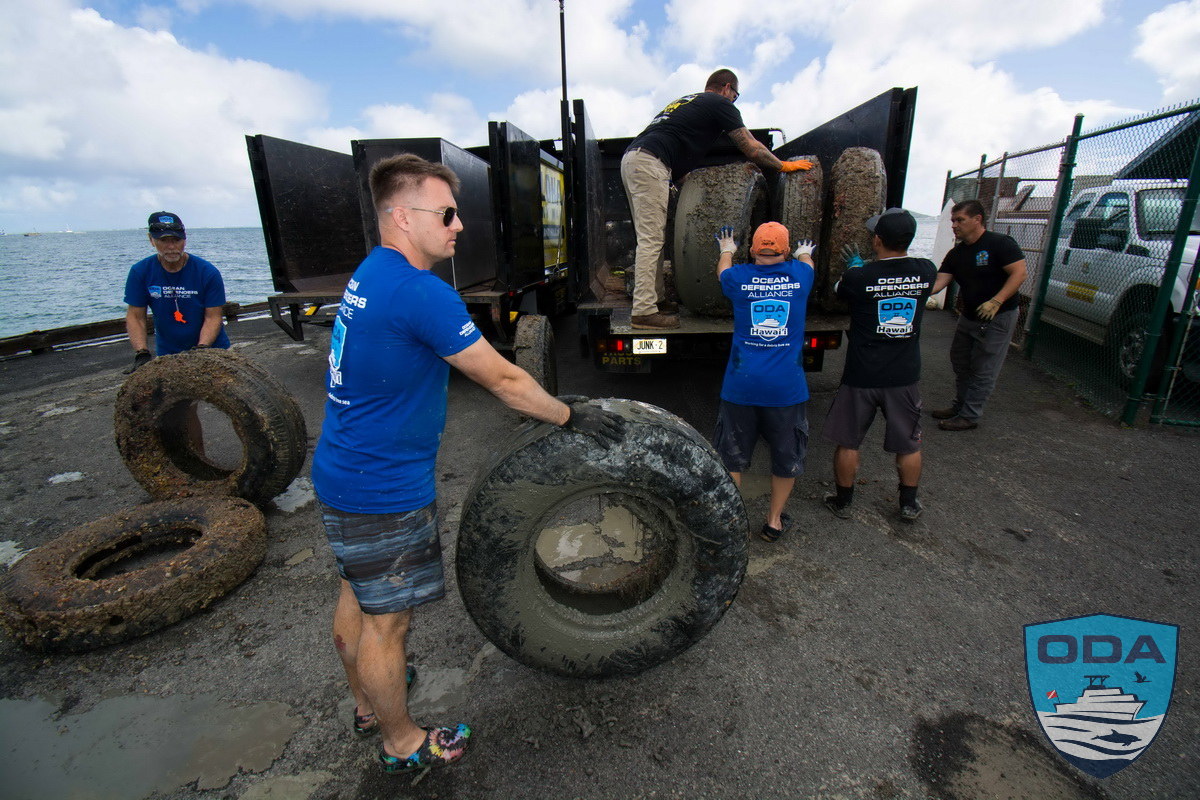 The energy on the pier was staggering.  Not just the physical energy but the energy that comes from passion.  Every one of those ODA volunteers were there because they care. They care about what happens to the environment and this is what they could do TODAY.

For those of you reading this, you may think “Oh yeah! This is cool for them, but I don’t live in Hawai’i.”  Maybe you don’t, but there’s always something that you can do every day.  Maybe that means using reusable bags at the store or staying away from straws and single-use plastics.  Maybe for you it’s educating and helping to nurture a passion for our earth in children.  These are only a couple of suggestions but each one is important.  Just as important as pulling 6,400 pounds of debris out of the bay. 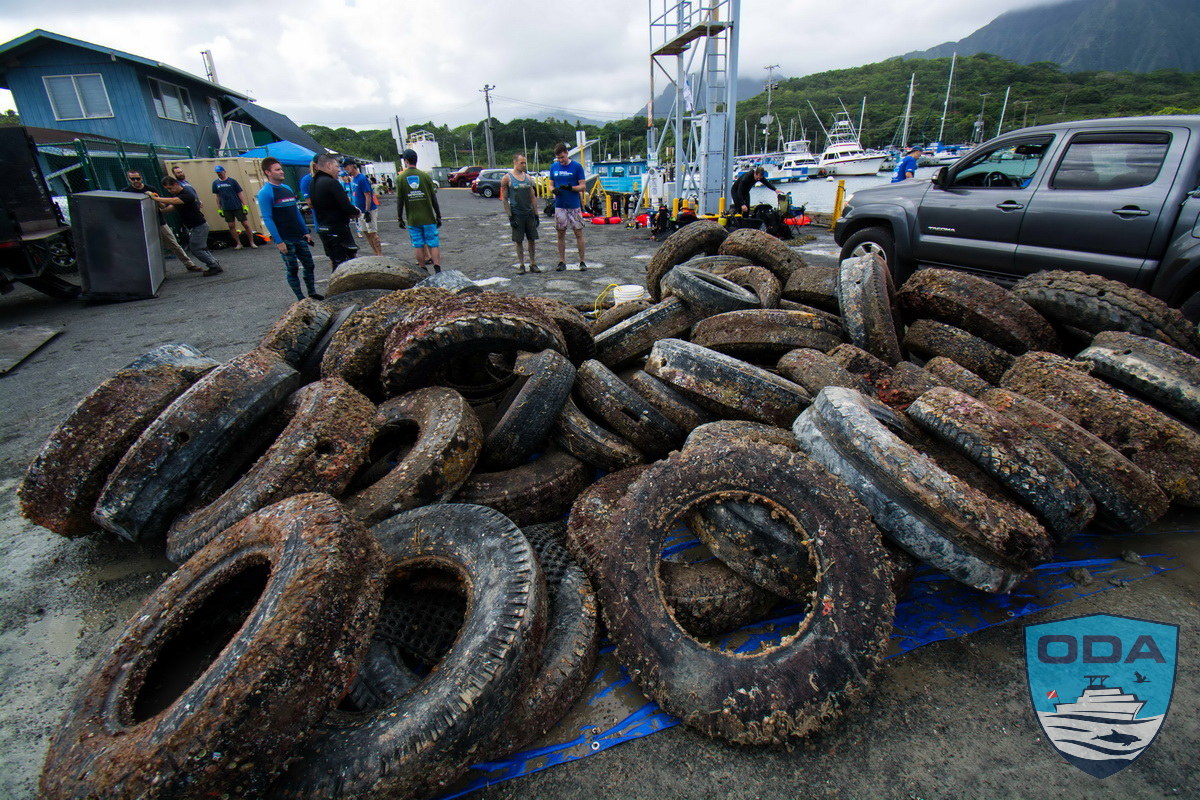 A HUGE MAHALO goes out to:

Aloha Junkman and all of the Ocean Defenders Alliance Volunteers including Alison Keith who worked for weeks with the folks at H-Power to make sure that all arrangements were in order, and ODA wouldn’t have to pay any fee for the disposal.  Matt from the Alohajunkman told me that it normally costs $110 just to dispose of one of those large tires.  We hauled out something like 50 of them! 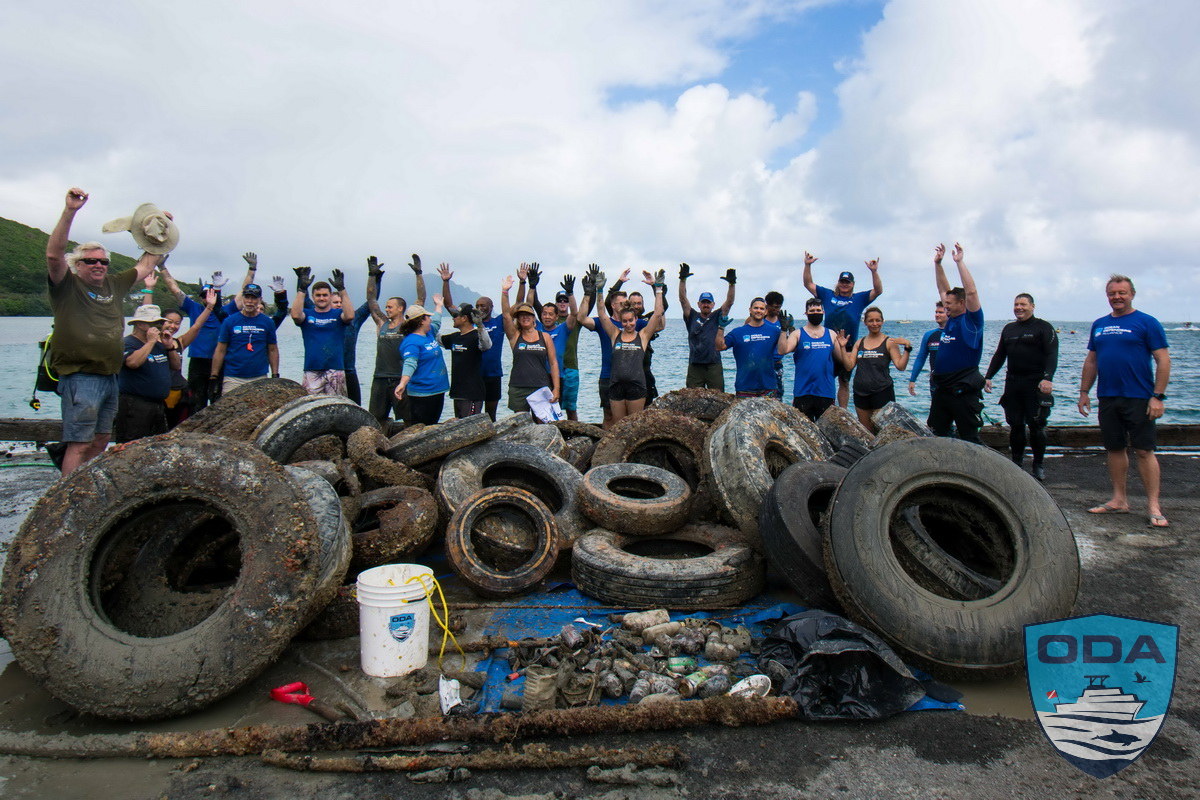 In addition to what Marjorie had to say here, I want to thank the core ODA volunteers who strategized for weeks on how best to run this event.

Marjorie, Mark England, Glenn Roberts, and Ken Staples had many discussions, and had everything and everyone prepared to make sure all the gear was in place, all the logistics were worked out and…Yes, they did it! The entire day flowed seamlessly.  No minor feat!

Anke Roberts for taking all these great photos!  She scrambled around all morning getting all the shots worth taking, smiling all the while.

Tanya Borabora is the Harbor Master at this location. She made sure all the boaters in the harbor knew that divers would be in the water for three hours and (to literally) steer clear.  She also arranged to have the pier closed for those hours to fishermen making sure no one got snagged on a baited hook.  On top of all that, she was out there getting tired and dirty helping to remove all the debris!

Lastly, I want to thank all the volunteers who showed up, as well as all the donors who make the financial investment to ensure this great work can happen.

Unfortunately, there are still tons more down there.  But you just know, like the creature from the Black Lagoon, we’ll be back…