or "Lobsters Have Feelers too"

This was one of the most memorable Memorial Days I've ever had; maybe more so for some lobsters and sheep crabs!

Determined as ever to remove as much abandoned fishing gear as we can, ODA spent Memorial Day-not drinking beers and hangin' by the BBQ-but by getting up before sunrise, climbing aboard the Clearwater, and heading back to Anacapa Island in the Channel Islands National Marine Sanctuary.

We headed south from our slip in Channel Islands Harbor, and as we passed the breakwall we were met with a bank of fog.  We could only see about a half mile, so I switched on the boat's sonar unit, which allows me to see any solid objects within a two-mile radius of our boat.  This ensures that I don't run into any boats-step one for a safe expedition!

The seas were nice and flat, with nary a ripple from the wind; a great day to be out on the ocean.  As we neared our destination on Anacapa Island, the fog started to break up and the sun tried its best to shine.  Although the fog and clouds never did reveal a blue sky, the water was quite different, and took on the kind of tropical sapphire blue you see in the tropics. Not your typical green soup we usually encounter in southern CA for sure. 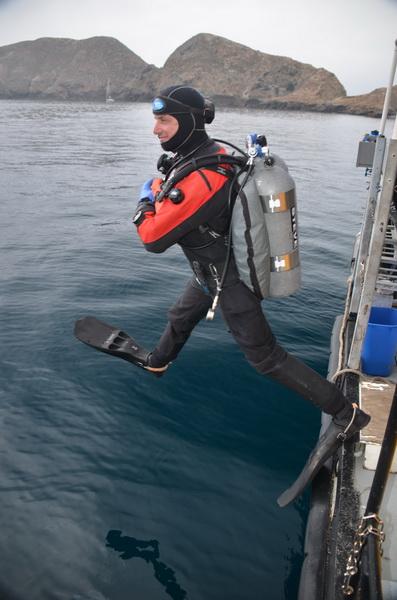 As the dive team jumped into the blue, we could tell this was going to be an extraordinary day for underwater visibility-and that is was, at roughly 40 feet!  A rare, rare occurrence here in Southern California.

As the dive teams were preparing to drop down and start looking for abandoned traps, there was an unusually light-colored sea lion swimming all around our boat.  Turns out it was an Atlantic sea lion!  We had been told by Danny Black that he had seen some out on Anacapa, in addition to some blue-footed boobies.  The warming oceans are bringing some unexpected visitors to our waters. 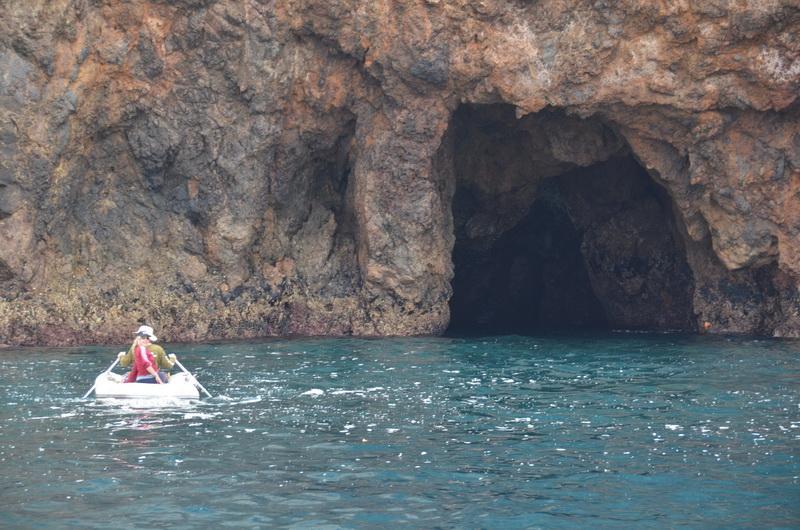 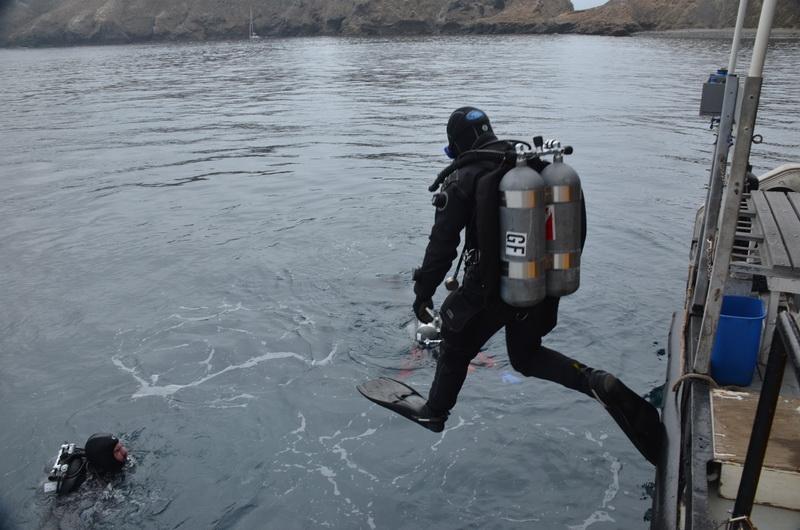 So Steve, Eric, and Kevin jumped in and went scootering off in search of abandoned traps.  They found a lobster trap in 105 feet of water and sent it to the surface with a lift bag.  Jim and Julia hopped into the Zodiac and hauled it back to the Clearwater.  We have previously removed a lot of debris from this site, so we were pleased to see that no new debris had accumulated here. 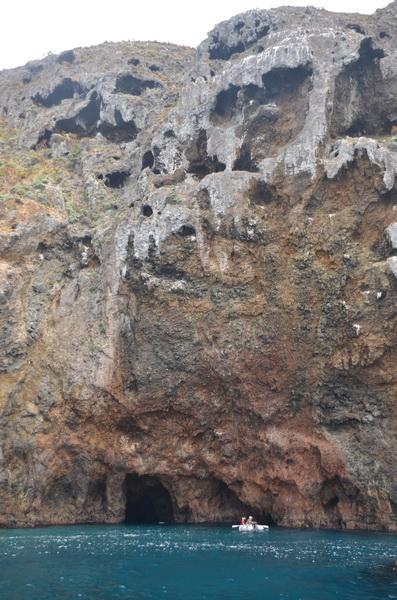 After the divers got back onboard, we headed west about two miles to a site where a dive boat had reported to me that their divers spotted two abandoned traps.  This is on the north side of West Anacapa, and is a gorgeous site: lots of caves worn into the rocks, many of which you can safely paddle into with a kayak or Zodiac.   The cliffs here went almost straight up, to about 400 feet.  There were pelicans, cormorants, sea gulls, and oystercatchers swarming all over the cliffs and over the water.

Kevin had issues with his dive gear, so he couldn't participate in this second dive, but off went Steve and Eric.  They soon had float bags breaking the surface, with Jim and Julia in hot pursuit to haul them back to our boat.  In all, they recovered two more traps, about 100 pounds of trap debris, and an aluminum tube.

When Steve and Eric got back to the boat, they told us about a VERY unusual encounter they had.

One of the traps they located had five lobsters and eight sheep crabs in it.  The animals were listless and appeared to be starving.

As soon as the divers released the lobsters the animals hardly moved, and immediately started eating some of the brittle stars that carpet the area.  99% of the time when a lobster is released, they take off like a jet and look for somewhere to hide.  These are nocturnal animals and become easy prey for other animals during the day, hence their usual rapid retreat for shelter.

After a couple of minutes feeding, one of the largest lobsters walked over to Steve and started to put his feelers on his arm.  Typically, lobsters use their feelers to ward off predators, but this seemed more like the animal was inquisitive.  Almost like it was thinking "what in the world is this creature that just saved my life?"

You can read into it what you like (or not), but this was a VERY unique experience.  The entire team was extraordinarily inspired by the entire day.  Phenomenal visibility, outstanding dive conditions, great company, and 13 animals live to see another day!

Saving animals from senseless death is what ODA is all about, from lobsters to whales and all things in between.  While we get thanks of appreciation from lots of people, this is the first time a lobster has reached out to us.  THAT, my friends, made for one very memorable Memorial Day!

Thanks to all of you donors for making ODA's operations possible, and to all our GREAT volunteers for spending their precious holiday out on the water with us, saving lives.

Please help us clean oceans and save lives!