Special Status & Field Report - Summer 2010 Clearwater Painted and Back in the Water! 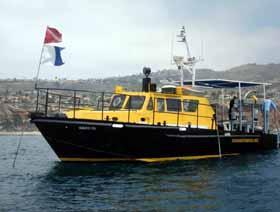 After finally completing the new paint job and overhaul during the spring, ODA was back in the water nearly every weekend in May and June.

I want to personally thank everyone who worked so hard on prepping and painting the Clearwater. Don Robarge not only put in countless hours, but also coordinated the whole paint crew. We had so many people donate their time and efforts over the last few months, I can't hope to remember you all, sorry, but here it goes:

Jim Lieber, John Milligan, Jeff Connor, Jeff Shaw, Billy Arcila, Greg Cooke, Al Laubenstein, Steve Smith, Cameron Freels (all the way from San Diego!), Sam Lopez with his 2 daughters, Mona Beckman, newcomer David, Robin Bronner...my hat is off to each one of you for enduring the sun, the heat and the hard labor. What a wonderful job you all did, and the paint job looks fantastic!

Our first dive of the year was on May 9. The dive team consisted of Don, Jeff Connor, Greg Cooke, Al Laubenstein, Andy Huber and Tobias Ehnus. The crew was filled out by Jim Lieber and Sami (Tobias's girlfriend). We headed for the first time to a site called the Old Marineland Pier. It is just south of one of the finest dive sites in S California, Old Marineland. The pier lies in 80 feet of water and is covered with nets. Even with terrible visibility the team removed about 200 lbs of nets, after two very arduous dives.

To help streamline the remainder of this over-due status report, it will be presented in chronological format.

May 13: I gave a presentation to the Sustainability Club of UC Irvine. Great group of concerned students, who got a lesson about the unintended consequences of ghost gear. Thanks for the invite!

May 15: Marked the annual Scuba Show at the Long Beach Convention Center. Even though ODA was not able to get a booth there this year, we were well represented for the duration of the show by myself, Jeff Connor, Andy Huber, Nic Ambrose, Greg Cooke and Maciek. We had a chance to get reacquainted with lots of old friends: Dr. Bill Bushing, Deb Karimoto, Dale Sheckler, the crew of Santa Monica Baykeepers, Dorsel Friends and a host of others.

May 16: I went to the best environmental festival in S. Cal - WorldFest. Lots of great organizations there, good live music and a very compassionate crowd. ODA did not have a booth there, but I wore my shirt and talked to many folks about what we are doing, including showing off all the great articles, pictures and video we now have.

May 22: Bonny Shumaker and I took off for Louisiana to see what we could do about the Gulf Oil Disaster. You can read about that whole experience on this special status report.

June 6: Old Marineland Pier. Went all the way out there and canceled the dive when the first divers couldn't see their hands.

June 16: ODA presentation to the Los Angeles Underwater Photo Club. This was held at the History Museum on the campus of USC. I was Invited by Scott Gietler who is one of the top U/W photographers in So Cal in my opinion.

June 19: Went back to Old Marineland Pier only to be turned away by seas that were too rough to dive in.

June 27: Returned to Old Marineland Pier once more only to be greeted with bad visibility. Went slightly north, past Old Marineland and removed 3 traps from some very dense kelp beds. It took us almost 4 hours to pull those traps! The kelp is the densest I have seen in years. We couldn't get the boat through the mats of kelp at the surface, so we had to float the trap to the surface, tie a line to it and pull it to the boat, which was at least 150 feet away. Good thing we have rope that long, thanks to all the wonderful donations we have been getting.

On the way home we pulled a very large bait tank out of the kelp beds that was destined to pummel anything that it came in contact with. Measured 3.5' x 3.5' x 4' deep. It was a mother to pull out but or team was determined. We also pulled about 6 of those incessant balloons from the surface of the water, and one large bundle of them that had about 30 balloons attached.

July 9: I represented ODA at the annual Watermans Ball in Dana Point. As a new SIMA grant recipient in 2010, ODA was invited by the organizers to attend this wonderful fundraising event which benefits several key organizations in California. Elizabeth Duffy accompanied and introduced me to several notable people in the surf community. We met up with Dan Stetson of the Ocean Institute, Jim Moriarty of Surfrider, and Robert Kennedy Jr. who was the featured speaker. Mr. Kennedy provided a great talk about the current state of the oceans and what individuals can do about it.

Later on July 9: ODA participated on a panel of experts after the screening of moving documentary "The End of the Line". The event was hosted by the Burbank Green Alliance. Other panelists were a proponent of fish farming, from the Aquarium of the Pacific, and a chef from The Ritz-Carlton. There were at least 100 people in attendance. I feel the majority of the questions from the audience about what fish were still OK to eat tell a larger story about a society not yet ready to let go of seafood at a time when we should be ending all consumption, according to experts like Dr. Sylvia Earle.

July 23: Rigs to Reefs conference. I attended this event in hopes of learning more about the issues surrounding this initiative to leave the Oil Rigs in place when they have run their course and are no longer producing oil. I'm going to write more about it in a separate article. Much thanks goes out to Garry Brown of Orange County Coast Keeper for putting such a diversified panel of experts together.

Although ODA has a very busy 6 months ahead both in the water and on land, we have encountered a new unexpected challenge to overcome to ensure ample time in the water during the height of the dive season. Our rusty ol' electrical generator as finally given out despite years of doing our best to fix and keep it running. While it's just one component of the Clearwater, it's as critical as an engine -- most of the power on the boat runs off AC rather than DC, including the anchor windlass, which is virtually almost impossible to lift by human hands.

Therefore, ODA is in search of either a donated generator, or $8,000-12,000 to help us get past this unexpected and possibly expensive hump. If you can help in any way, please see our home page for ways to donate, or feel free to contact us directly at .