Spring cleaning and a change of scenery

As March gave way to April, on March 31st I moved the LegaSea up to Oxnard to be closer to the northern Channel Islands.  The trip from San Pedro to Channel Islands Harbor is 54 miles, and it took 5 hours to complete the journey.

Along the route I saw several dozen mylar balloons floating on the water, but because I was by myself, I had to let them be, as I couldn’t handle the boat and the “fishing net” at the same time.  While I didn’t see much in the way of wildlife, I did see one whale less than 100 feet in front of me, and as I approached Channel Islands Harbor, I was treated to a pod of several hundred dolphins, some of whom came over to greet me and do some bow riding.  Sweet! 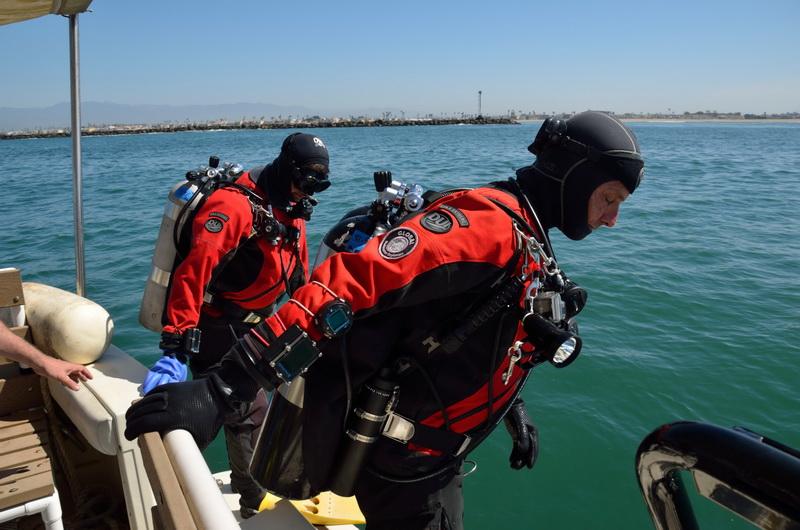 1st dive of the year in Oxnard

We had scheduled a dive for April 2nd, but because of high seas we had to cancel that.  On Tuesday the 5th, Steve Millington, Bob Sherwood, Stacey Garrett, Jeff Connor. and I headed to the CI Harbor break wall to see if we could find any abandoned lobster traps to remove.

Steve and Bob were pumped to get in the water and clean up this area.  While Steve has been diving with us regularly for the last 5 years, Bob had only gone out with us once before, way back in 2011.  He brought along his girlfriend, Stacey.  Great to have them both taking the initiative to help ODA with our mission.

As Steve and Bob jumped into the water, I could see that visibility was not going to be looking very good.  Bob had on bright yellow fins, and you could barely see them 4 feet beneath the surface…

They grabbed their scooters and headed to the bottom: 40 feet down.  Turns out visibility was even worse at depth.  They only discovered where the bottom was when they hit it with their feet.  But Steve and Bob are very skilled divers (both are actually dive instructors!) and decided to navigate a route that would take them along a path where the lobster fishermen lay their traps, about 200 feet parallel to the break wall.

After about 15 minutes we saw them pop up at the surface about 300 yards away from where we were anchored at.  They got their bearings, dropped down again and headed to the break wall.  They then swam the entire length of the break wall.  When they got to the end of it we finally saw 2 lift bags break the surface.  Excellent!

They surfaced a short time after that and swam back to the boat.  As soon as they were back onboard, Jeff took the RIB out to retrieve the bags, attached a line to them and then towed it back to us.

Within minutes we had a trap on the front deck, along with a trap weight bar and about 100 feet of trap line.

As we headed back to our boat slip, Steve and Bob told us how bad this vis was.  In order to not lose sight of each other, they had to scooter along literally touching arm to arm.  They couldn’t see more than 2 feet.  In fact, even while they were making their way along the bottom, they couldn’t even see it, they had to put their hands down and touch it to confirm it was even there.  Yikes.

In years past we have found a lot of debris here, but because of the horrible visibility Steve and Bob just couldn’t see what they were most likely passing.  We’ll come back another day when the vis it better. 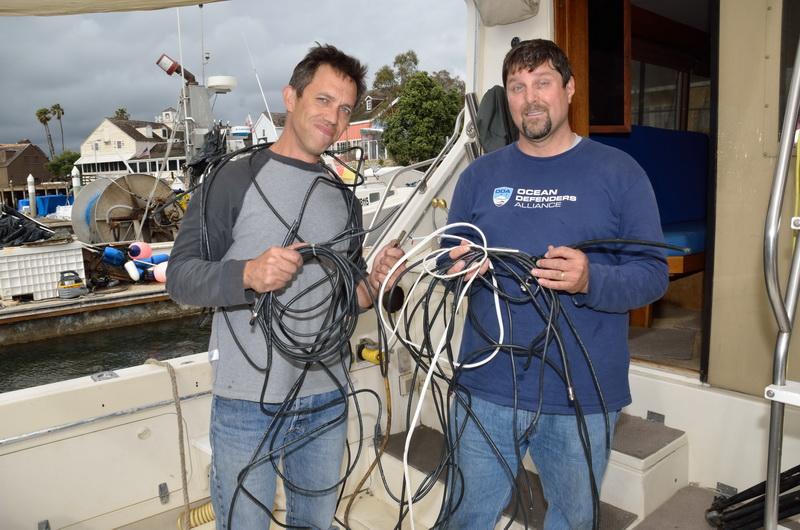 Because of the storms we’ve been having lately, I was forced to work on the boat instead of diving in waters that you can’t see your hand in front of your face.

Jeff Larsen volunteered to take a look at several of the electrical issues we’ve been experiencing on the boat.  We met up on Saturday, the 9th, and he was knee deep in wires and bad connections when Andre Casanave showed up to lend his skills to help diagnose the many issues we have.

The two of them worked on not only fixing the problems but also started removing hundreds of feet of wire that is strung throughout the boat.  These wires are leftover remnants of systems that are no longer on the boat.  But when the past owner had this work done, he didn’t remove the cables and wiring, they just cut the ends and left them in place.  It makes it VERY difficult to trace any electrical problem with so many unused wires running all over the place.  As time and expertise allow, we will continue to clean up this frustrating issue.  If anyone out there wants to help with this phase of boat maintenance, let me know! 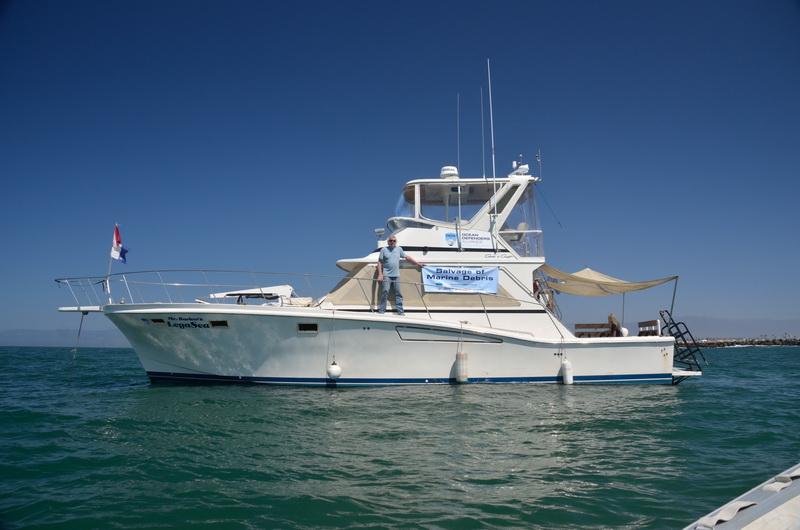 The Los Angeles Port Authority has decided to renovate the San Pedro waterfront, and in the process will completely remove the marina that we called home for the last several years.  So, while we look for a new boat slip in the Los Angeles area, in the meantime we’ll be located in the CI Harbor this summer.

If you are in the Ventura/Oxnard area, stop by for a visit.  Better yet, come on out with us while we work on cleaning up the wonderful underwater world of the northern Channel Islands!

And if you can’t make it to the boat, please remember that your donations from afar always make a huge difference.

Please donate here, and be an ocean defender!