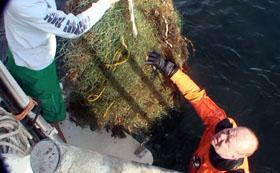 After 6 weeks of rain, rough storms and unseasonable cold weather, ODA finally got a window of opportunity to get back in the water. Sunday, Jan. 16th was looking like a pretty good day to dive – our first official expedition of 2011. The Santa Ana winds had been blowing for the last couple of days and the sea's were nicely flattened as we headed out of our slip in San Pedro.

Before the bad weather got the best of us in early December, we had been working on a mitigation site called the "African Queen", a modest wreck that lies 3.5 miles out of the Port of Los Angeles. There isn't much known about the wreck, but it is a small boat (approx. 50 feet long) resting in 85-feet of water, surrounded by sand. The site is a splendid dive destination, featuring lots of colorful anemones', beautiful metridiums, and hundreds of small fish that take refuge on this accidental artificial reef.

Back in December and November we had been scouting the site to evaluate the best method for removing the abandoned commercial fishing nets that engulf it. There are several types on it: rope, hemp and monofilament, all of varying thickness and mesh size.

As we motored out of Angels Gate and into the open ocean to the inviting ocean, and it felt like Poseidon was on our side. The sun glistened off the surface of the water as we took our course to the wreck. The usual hazy/smoggy view of Catalina Island was so clear this day, it seemed within swimming distance despite being over 25 miles away! To the North were the snow-covered peaks of the San Bernadino Mountains, and slightly to the east of them were the San Jacinto Mountains, also covered in snow.

As we were approaching the site we saw the floating black flags that let you know there are gill nets attached to them. We saw tow sets of the fish traps, with one set being approximately 150 yards away from our dive site. YIKES, we sure don't want anyone getting caught in a current and getting blown into one of those potential life-threatening commercial fishing devices.

We found the exact site on the depth finder, and Jim and Cameron dropped the anchor. Next the dive team discussed their plans for the first dive. It was determined to do conduct a short dive, shoot video and stills, and come back up and talk about how to best approach this particular project.

The dive team consisted of six highly skilled people. Mike Wynd and Mike LaPrade were on rebreathers, while Heather Hamza, Chris Robinson and Andy Brohard were diving on normal compressed air. Tom Boyd was with them as the underwater cameraman, taking both stills and video.

Tom got some good footage, which showed there is plenty of net smothering the wreck for more than one team to work at a time. After a short surface break, the team's headed back down. It was determined that Mike W. and Mike L. would work on one area and the rest of the team would work in a different side of the site.

Heather, Chris, Andy and Tom returned to the surface after about 40 minutes, at that depth they only have about 20 minutes to stay on the bottom. After taking their 15 minute safety stop, they all clamored back onboard with good news. They were able to cut away a lot of net, but didn't have enough time to tie it up and bag it...that was left to the two Mikes still down below.

Note: Rebreathers allow divers to stay down for extended periods of time compared to those who breathe normal compressed air - their only enemy is the cold. But with everyone wearing drysuits on this day, the frigid waters were not much of an issue.

Mike Laprade surfaced first, he looked exhausted and said that they were able to remain at the bottom for 100 minutes! With their safety stops, they were in the water for well over 2 hours. Mike Wynd surfaced shortly after that, but this time he had something in tow.

He swam to the stern with a lift bag fully inflated, and told us to drop the davit line into the water to haul his "catch" up. As soon as Jim and Cameron got it hooked up Mike got back on the boat. When he got out of his diving rig we started hauling the catch up. When it got near the surface of the water I could see it was rather large. Finally after several minutes it broke clear of the water and we could see it was a HUGE pile of monofilament net.

As we moved the pile onto the rear deck, all kinds of life started falling to the floor. Bristle Stars, Sea Slugs, Shrimp, Crabs and other bottom dwellers that were at home in the net. We also found several live and dead fish tangled in the web. We removed as much life as we could and gently placed them back in sea to find new homes in their indigenous habitat.

While there was some rope in this massive pile, 95% of it was monofilament net. The same kind used for the gill nets that we were seeing as we motored out to this site. This kind of gear is near impossible to see with the naked eye underwater to humans and wildlife alike. These nets are indiscriminant killers. Birds, turtles, seals, sea lions, dolphins and even large whales risk becoming drowning victims as soon as they come in contact with man-made objects.

We estimate that our salvage of the day weighed over 125 pounds. I wish we could have untangled the net to show how much surface area that covers, but we were running out of daylight and energy with most of the crew working over 11 hours this day.

It was a GREAT day, and a very refreshing way to start the New Year. ODA's team was able to set several fish free to live another day while carefully and permanently removing some deadly ghost gear from vital habitat. Heather even went back down a 3rd time to cut a crab loose from the net still attached to the African Queen. These lost fishing nets are a human community problem and it takes the whole community to undo the harm that this ghost gear causes. ODA accomplished much this day and will return.

Thanks to all the divers who have worked on this project. Thanks to Jim and Cameron for doing all the deck support work. And, thanks to all of you who have contributed financially and/or by volunteering. Please pass the word on to your friends, family and co-workers: ODA cannot do what we do without your support, be it monetary, diving, or spending time working to maintain our flagship, the Clearwater.