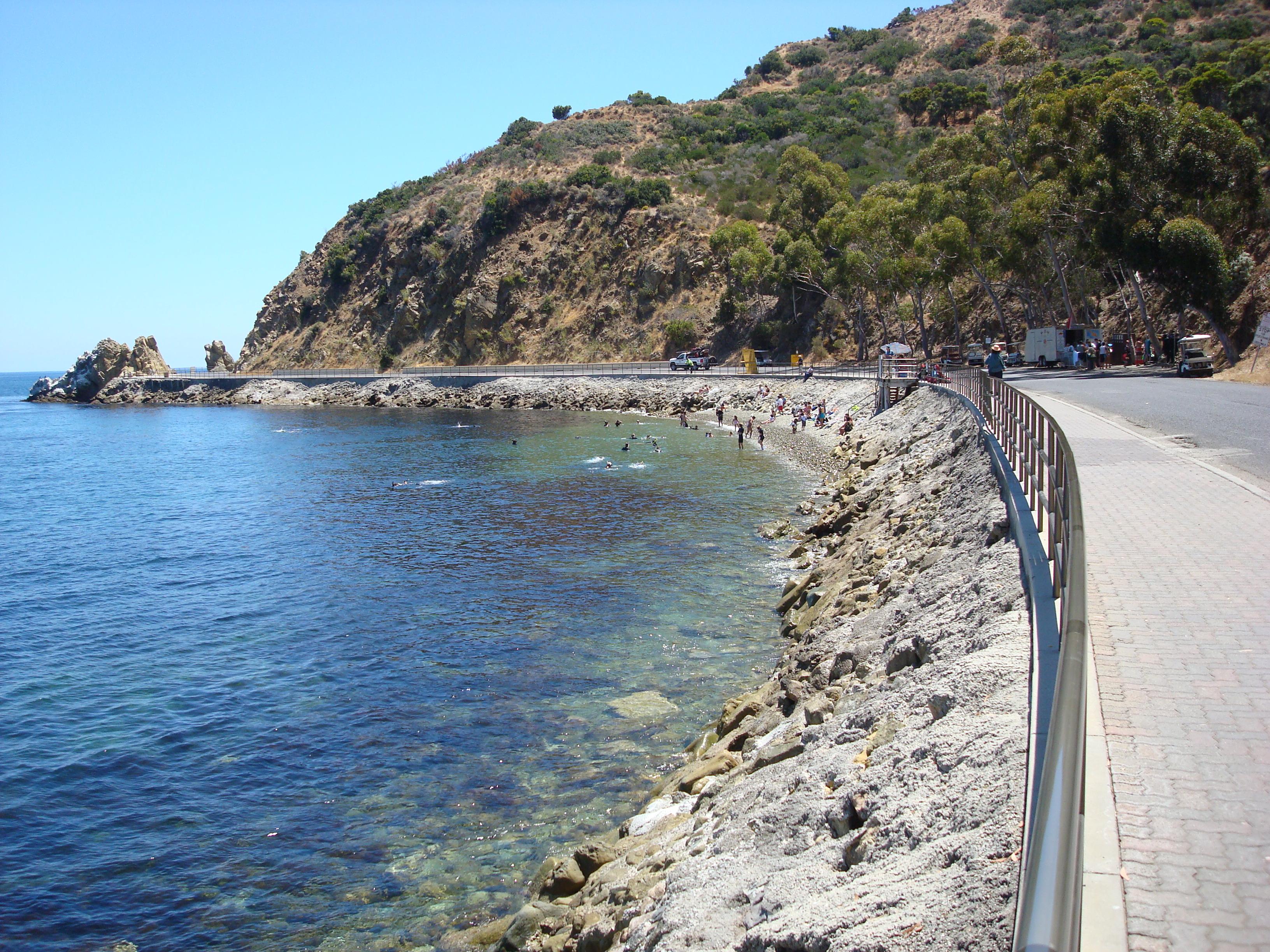 This story begins In 2011, with a 60-foot sailboat that was anchored just outside Avalon Harbor on Catalina Island, CA. One night the boat dragged anchor and came to rest in Lovers Cove, where it sank shortly thereafter.

The vessel, named Godspeed, then drifted into the shallow waters just outside the harbor, sunk, and came to rest in Lover's Cove.

The cove is as magical as the name implies and was designated as a Marine Protected Area (MPA) decades ago.

In 2013, California's Governor, Jerry Brown, established 119 Marine Protected Areas (MPAs) along the California coast with the goal of helping our marine life rebound after centuries of abuse by the many extraction industries that saw the oceans as nothing more than something to be exploited for financial profit.  These MPAs now protect 16% of state waters, with 9.4% of state waters being no-take zones!  Although Lover's Cove was already an established marine park when these designations were made, the boundaries were expanded as the others zones were created.

Without "going deep" into reasons these areas were set aside, suffice to say that MPAs are the most cost effective and easiest way to help nature rebound to its once prolific state.

In 2013, ODA applied for and was granted permits by the California Department of Fish & Wildlife that allow us to go into most of the MPAs in southern California-for the sole purpose of removing manmade debris that is harming or killing wildlife.  We are one of only two organizations (that I know of) that have these permits. 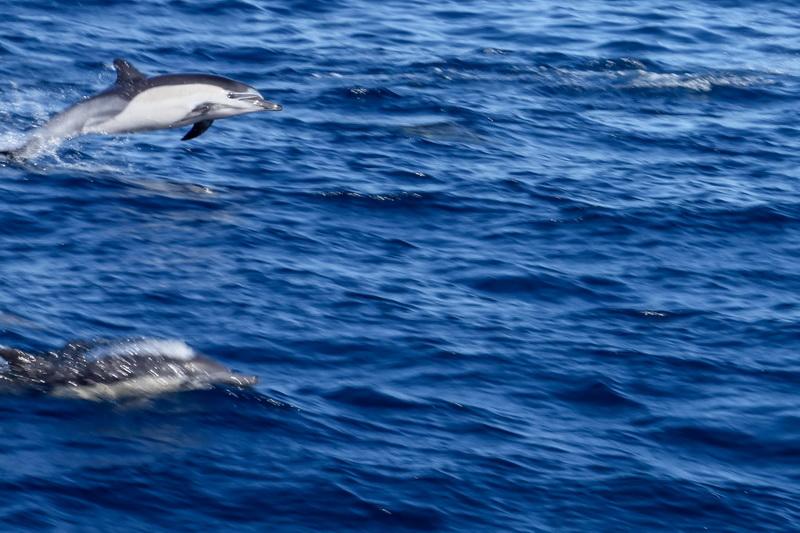 So anyway, fast forward to Sunday, July 26th, 2015.  Knowing the history of the vessel Godspeed, we loaded up our boat, Mr. Barkers LegaSea, with five divers and crew.  We left the dock at 8am and headed towards Catalina.  We had a rough ride over, with 4-foot swells hitting us on our starboard beam.  To make things worse, the time between swells was a short seven seconds, making for a very rock-n-roll ride.  When we got within five miles of the island the waves started to calm down and I saw two huge blue whales no more than 200 yards in front of us.  Everyone else was below decks in the shelter of the cabin, so we didn't get any pictures of that, BUT the images are fresh in my mind!

A few minutes later we saw a herd of dolphins coming right at us.  So, I turned the boat around to see if they might be interested in riding our bow wake.  Interested?!  You might say that they were downright excited, as it seems like all of them were leaping out of the water.  There were probably 200 of these common dolphins in the pod.  It was a nice way to get everybody fired up for our arrival in Avalon. 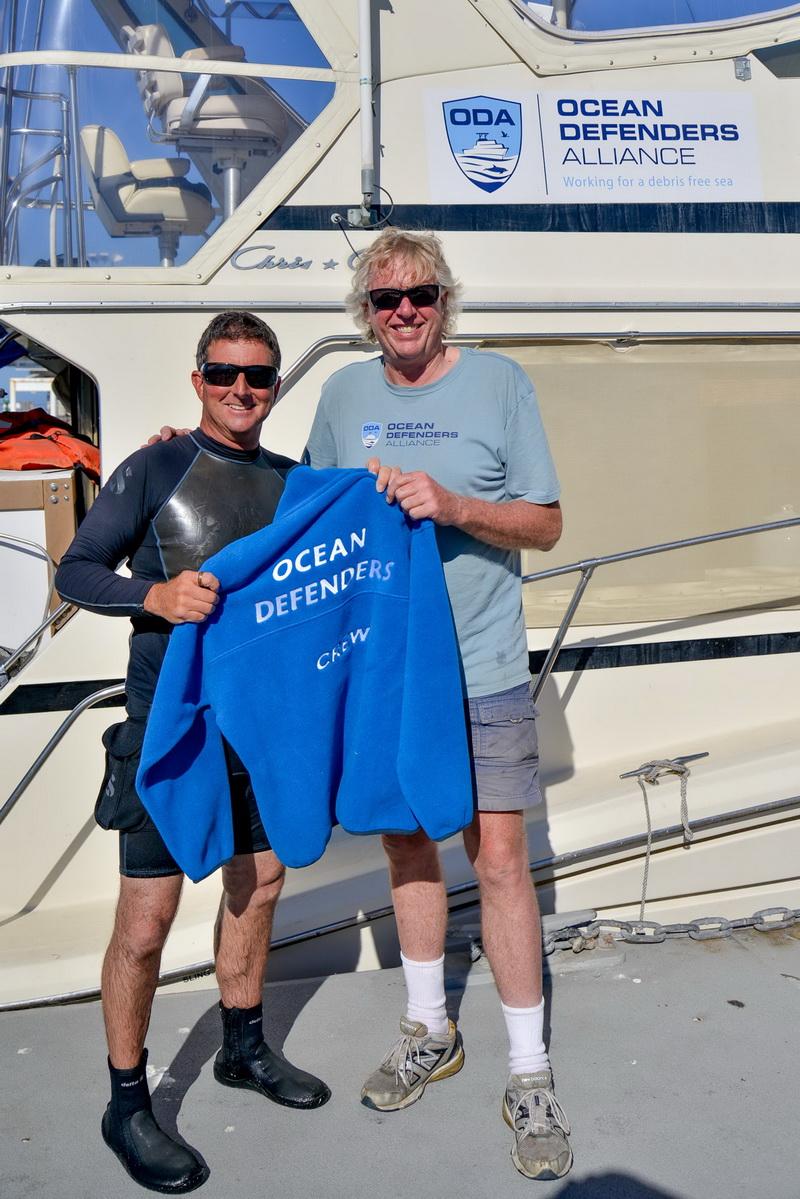 We pulled into Lovers Cove around 10 o'clock, and were met by Jason Manix and his buddy Jeff Palmer.  Jason has decades of experience in several areas of the dive industry and volunteers with ODA as a dive coordinator and sits on our Advisory Board. Jeff used his skiff to bring Jason to meet us, saving ODA the time and money of going to Avalon Harbor before getting to work.  We quickly got Jason aboard with all his gear, and after the introductions, we got down to the business of strategizing how we were going to attack this project.

When the Godspeed went down it was in one piece, but the forces of nature soon had her broken up into thousands of pieces.  We dived this site in 2013 and saw large pieces of debris scattered over an area approximately 30 yards by 50 yards.  Now the field was much larger, and the pieces were broken down into smaller chunks.  One thing that was still intact was the mast.

Even though the mast was still in one piece, it had moved a considerable distance from where we initially saw it,  which shows us that as things are tossed about by the tides and storm surges, they act as battering rams…destroying the many plants and animals that can't move out of its way.  That is why it is important to remove it-and other debris.

As soon as we got the LegaSea securely in place, we got all our divers in the water.  In addition to Jason Manix, we had Al Laubenstein, Kim Cardenas, Dan Eisenbeitz, and Bill Maley as the working divers, with Walter Marti on hand to do the underwater filming. 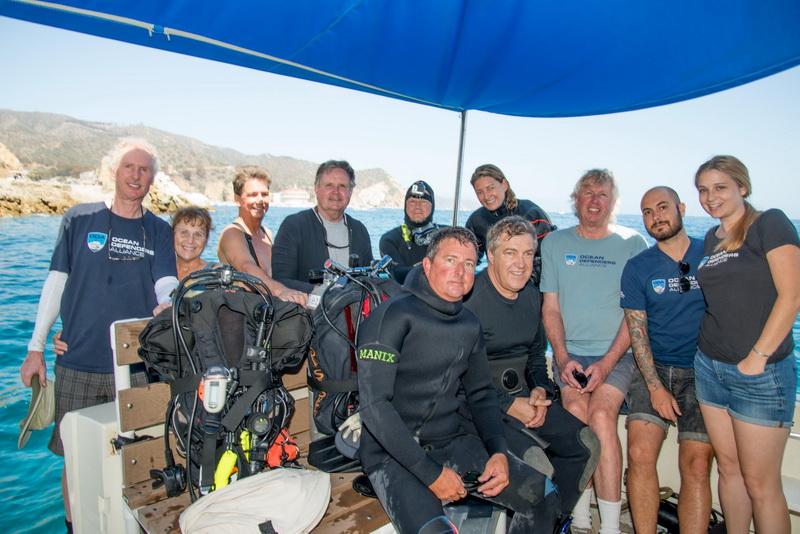 The mast Kurt, what about THE mast?!?!

As any sailor knows, masts are really long and have all kinds of rigging fastened to them to help stabilize them on and attach them to the decks of boats.  Well, when said boat is in a million pieces, the rigging dangles all over the place.  This mast was made out of steel, and as a result is very heavy.  To further challenge us, the rigging wasn't made out of rope, it was steel cables…this was NOT going to be any easy extraction project.

One of the good things about the mast was that it was in shallow water: about 10 to 20 feet.  The mast was probably 40 feet long and roughly 12 inches in diameter (imagine a huge razor "shaving" the bottom of the ocean).  The team started by tying short sections of thick rope around the mast, spaced about eight feet apart, and then attaching each of the ropes to lift bags.  After about an hour of doing this, and with all the lift bags carefully filled with air, the mast refused to come to the surface.

To see the complete series of underwater photos, be sure to check out the photo gallery below!

The dive team climbed back on board the LegaSea, refueled themselves with some lunch, and talked about how best to attack the mast.  It was decided that we needed more lift bags and some big cable cutters.  So Jason and Jim jumped in the RIB (rigid inflatable boat) and headed to the harbor to pick those items up from Jason's house. 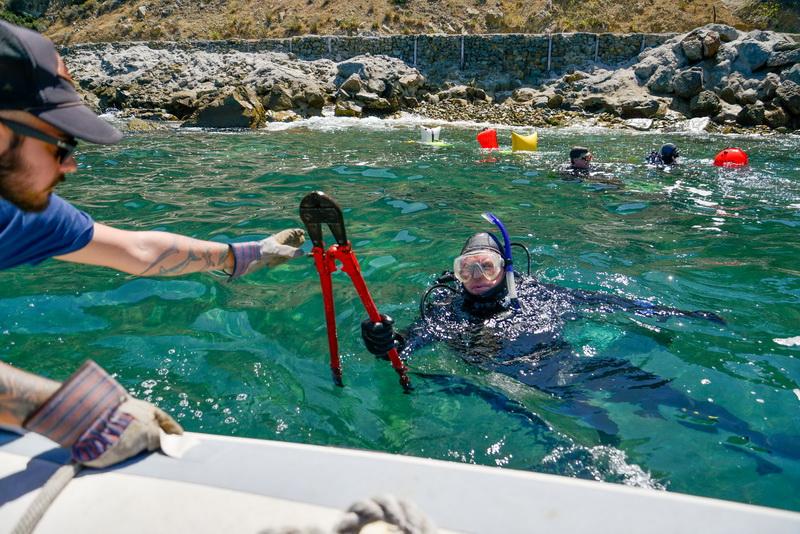 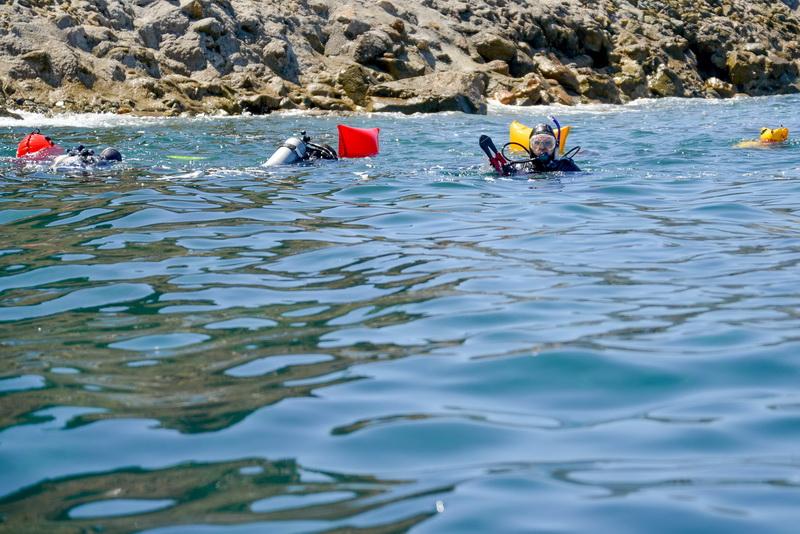 As soon as they got back, all divers and boat crew returned to the task at hand.  Within 15 minutes, all the lift bags were peeking out of the water, and we could see the mast just below the surface.

Thanks to Jason's guidance and foresight, I had contacted the City of Avalon, told them what we were doing, and asked if they would allow us to use their crane to remove any large/heavy objects that were too big for us to remove by hand.  They told me that they would have someone available to operate the crane, and all I needed to do was call them when we were ready.
With that in mind, we proceeded to attach a towline to the mast and Jim slowly towed it over to the crane with our RIB.

Lover's Cove is an underwater wonderland.  Because there is no fishing allowed, the park is teeming with fish and other marine life.  While they don't allow scuba diving in the park, snorkeling is permitted, and we saw several dozen people doing just that while we worked on the site.

While everyone was focused on the divers, I saw a Harbor Patrol boat pull up near us.  I waved hello to them and they waved back and gave me the thumbs up sign.  They were thanking us for what we were doing.  In fact, several times during the day different boats gave us the same message...including the yellow submarine that takes tourists around the marine park to see what lies just under the waterline.  I can see why they would be appreciative, who wants to spend their hard-earned money on a submarine ride and see the bottom wrecked by the remnants of a broken up sailboat?

As Jason, Kim, Jim, and Adam were hauling the mast over to the crane, Al, Dan, and Bill put our remaining few lift bags onto some metal tubing that was sticking up off the bottom.  It turned out to be the pulpit from the same boat. The pulpit is the railing at the bow (front) of a boat, which sometimes extends past the deck. Once the team got it to the surface, we hooked up a towline to it and used the LegaSea to haul it over to the crane.

As we arrived at the crane, we could see that it wasn't going to be easy to get the mast out of the water.  Fortunately, Jesse Delgado, who works for the city of Avalon, was there to help Jason get the mast properly tied up and balanced so we could place it on the cement dock: it was no minor feat, and took about an hour to complete this phase of the job.
Comparatively speaking, it was a piece of cake to get the pulpit out and onto the dock.

I'd like to thank Brian Bray of the Harbor Department for allowing us to use the crane.  There was no way we would have been able to lift that 1,200 pound, 48-foot long mast; or the 400 pound pulpit; without his help.  I also thank Jeff Palmer for ferrying Jason and his gear back and forth from the harbor to the LegaSea.  Last but not least, thanks go out to Steve Batty of Avalon Environmental Services; they let us use one of their containers at no charge, and are going to send the debris to the mainland for recycling.

As always, much appreciation goes out to the entire ODA volunteer crew, and this time especially to Jason.  He was a workhorse the entire day, and didn't even stop to eat.  Because of his commercial diving skills we got this job done safely and well.  Everyone was glad to be involved, AND we all learned at least five new knots from the knot king: the AMAZING Jason Manix.  Thanks buddy! 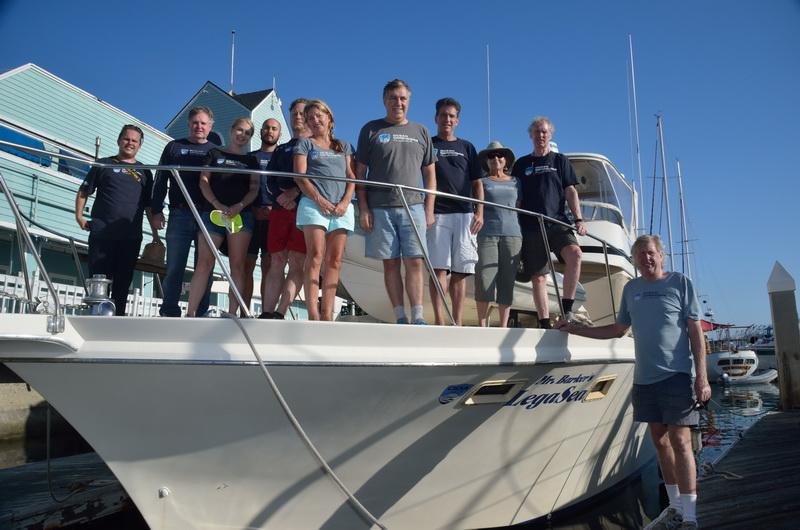 We ended up leaving Avalon at five o'clock and headed back to San Pedro.  The ride back was much smoother than the ride over, and most everyone took turns resting in one of our many bunks.  I wish the story ended there.

Even though we had a GREAT day….

…all did not end well.  As I pulled into our San Pedro slip, the engine began to act up. We could tell it was a big problem, so the days following this outing will involve a lot of labor to get the boat running again.

Please stay tuned.  We will be back out defending the oceans as soon as we can.

Take a moment to enjoy these fantastic photograph, many taken by Dakotah Rains. You can see which ones are his in the gallery below!