One of the things I love about living in Hawai’i is that people come together and make things work, even if it may be slightly inconvenient. Not only that, but everyone goes the extra step and supports each other! And that’s what happened on April 23rd during our Magic Island Earth Day Cleanup! 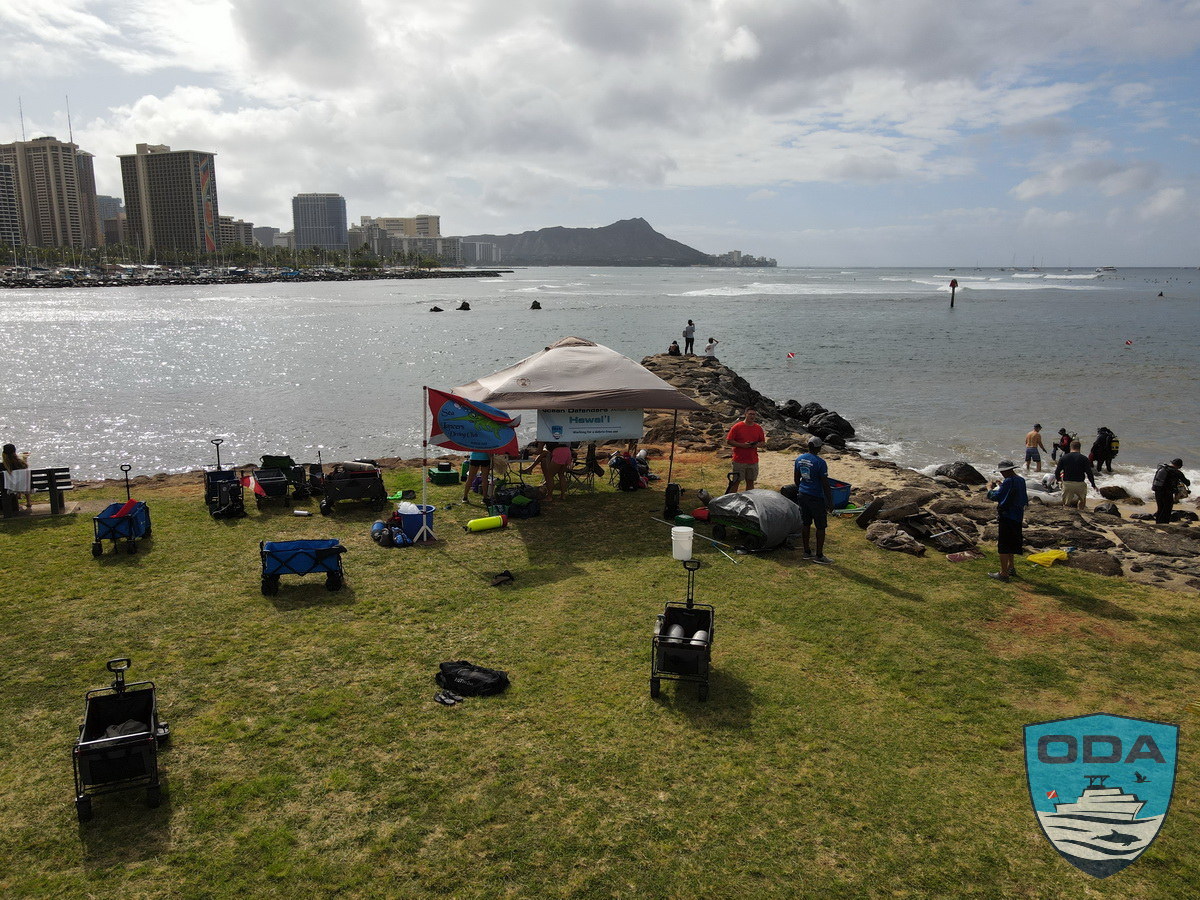 After loading our wagon with supplies for the cleanup, my husband Mark England and I started the long walk to the gathering point for ODA’s Earth Day cleanup. As we walked the path, I noticed an “announcer tent” and realized there was a surfing competition going on. The surfers were entering the water where our divers would also be entering and doing their cleanup work! Fortunately, ODA’s Glenn Roberts had already talked to the competition coordinators, and they were perfectly fine with what we were doing. So, we continued the trek and got things going.

The day wasn’t the most beautiful. We had strong gusts (that eventually took down our cleanup partner Sea Lancers’ tent), it was overcast, and we had some drizzle. But little could deter the nine onshore volunteers 21 ODA and Sea Lancer divers from getting in the water!

Check out these photos from volunteer Leland Hasty's drone! Pretty cool shots of the volunteer tent and the area where the divers were coming in and out of the water. There are a lot more great photos in the photo gallery below – be sure to check them out! 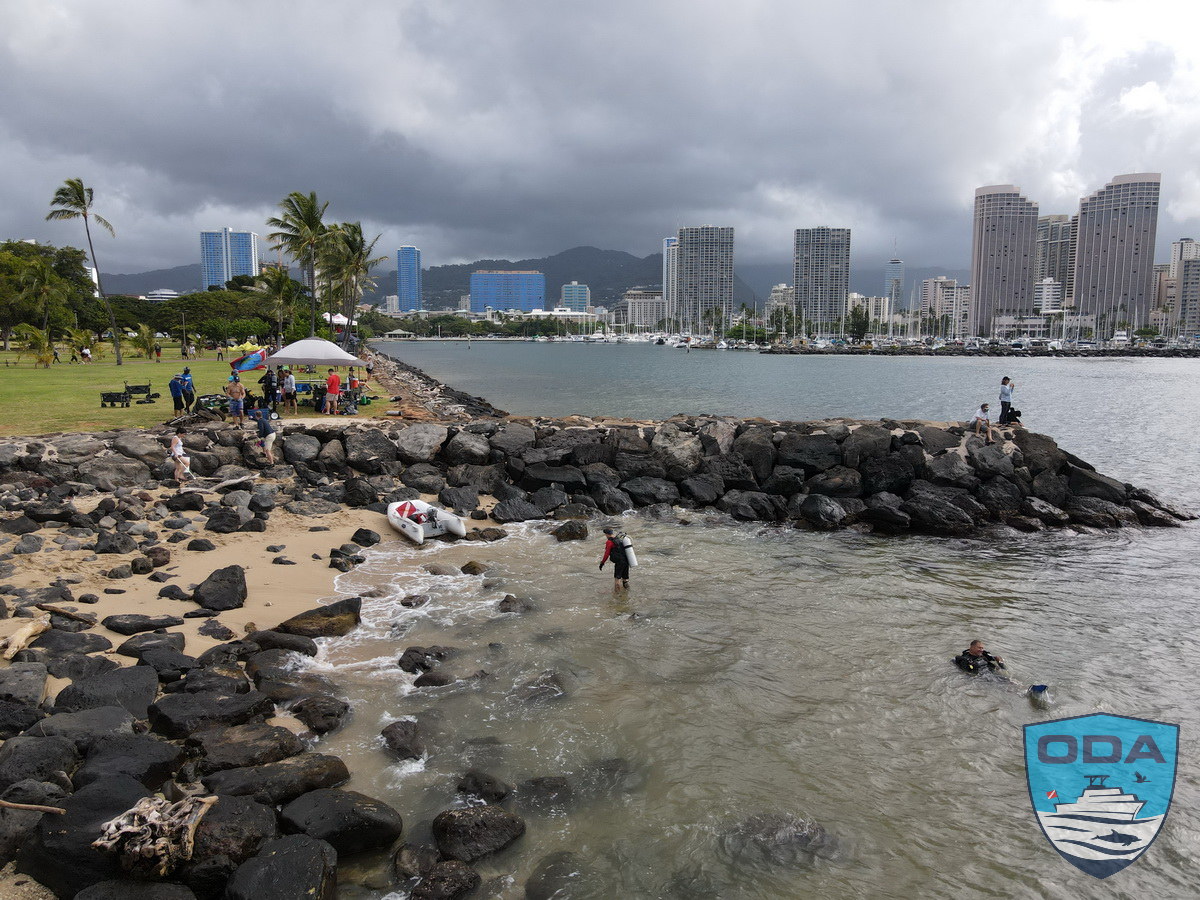 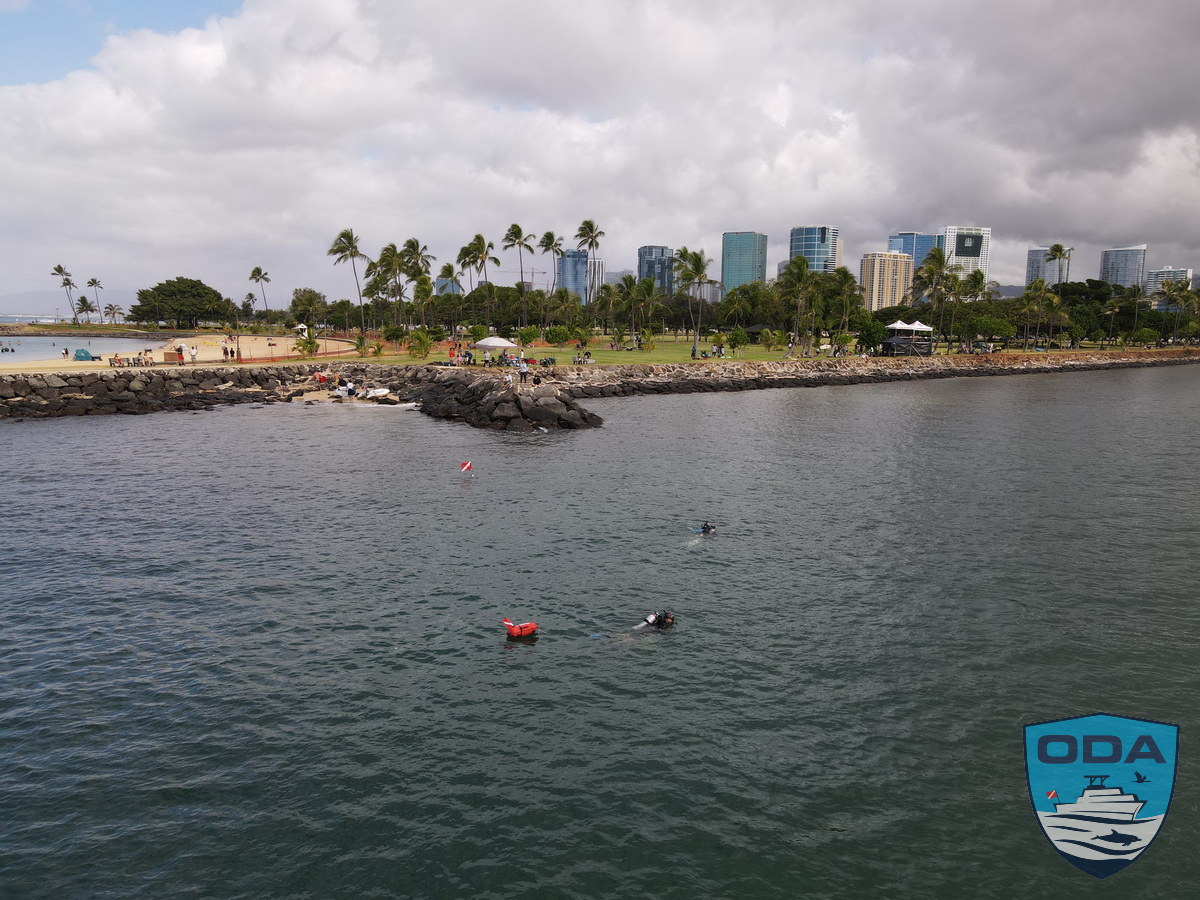 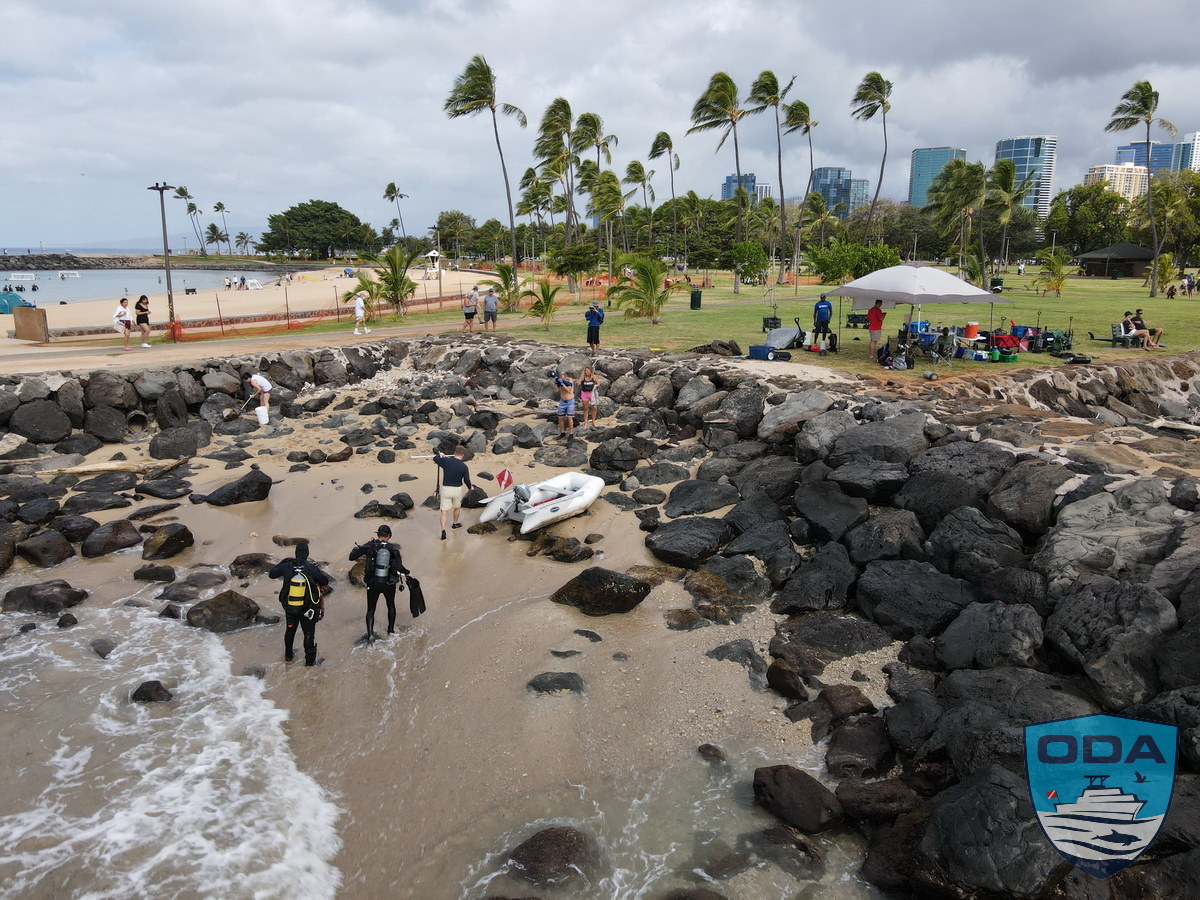 For the next couple of hours, Mark and fellow volunteer Walker Embrey climbed up and down the rocks, retrieving trash from the divers so they could head back out for more.

Bags full of fishing line (about 1000 yards worth) were gathered along with fishing hooks and weights, and many, many water bottles, slippahs, wallets, and other smaller trash items. 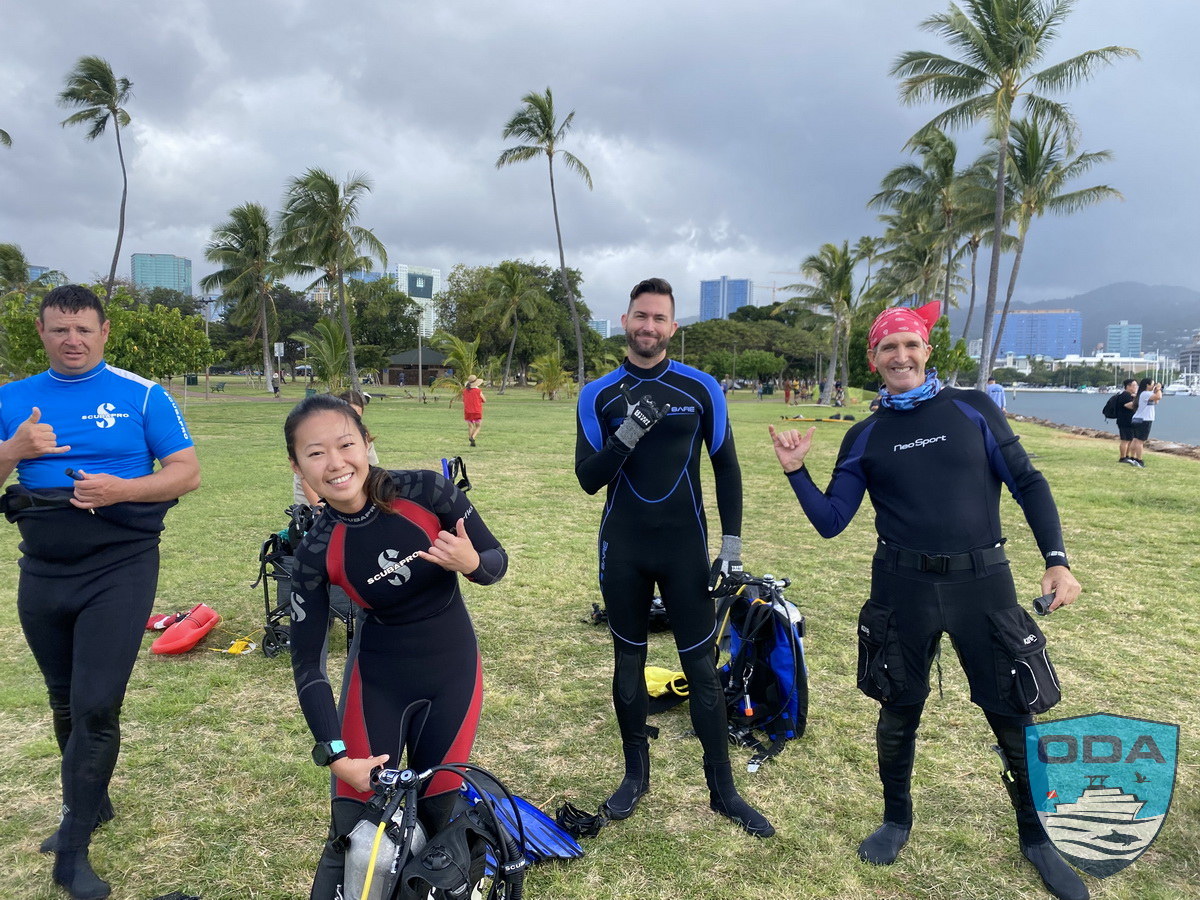 Then the divers brought in a pallet, tires (7 in total thanks to the lift bags!), a drone, pillows, and even a can of spam with the spam still in it (…nobody was brave enough to take a taste though!)! 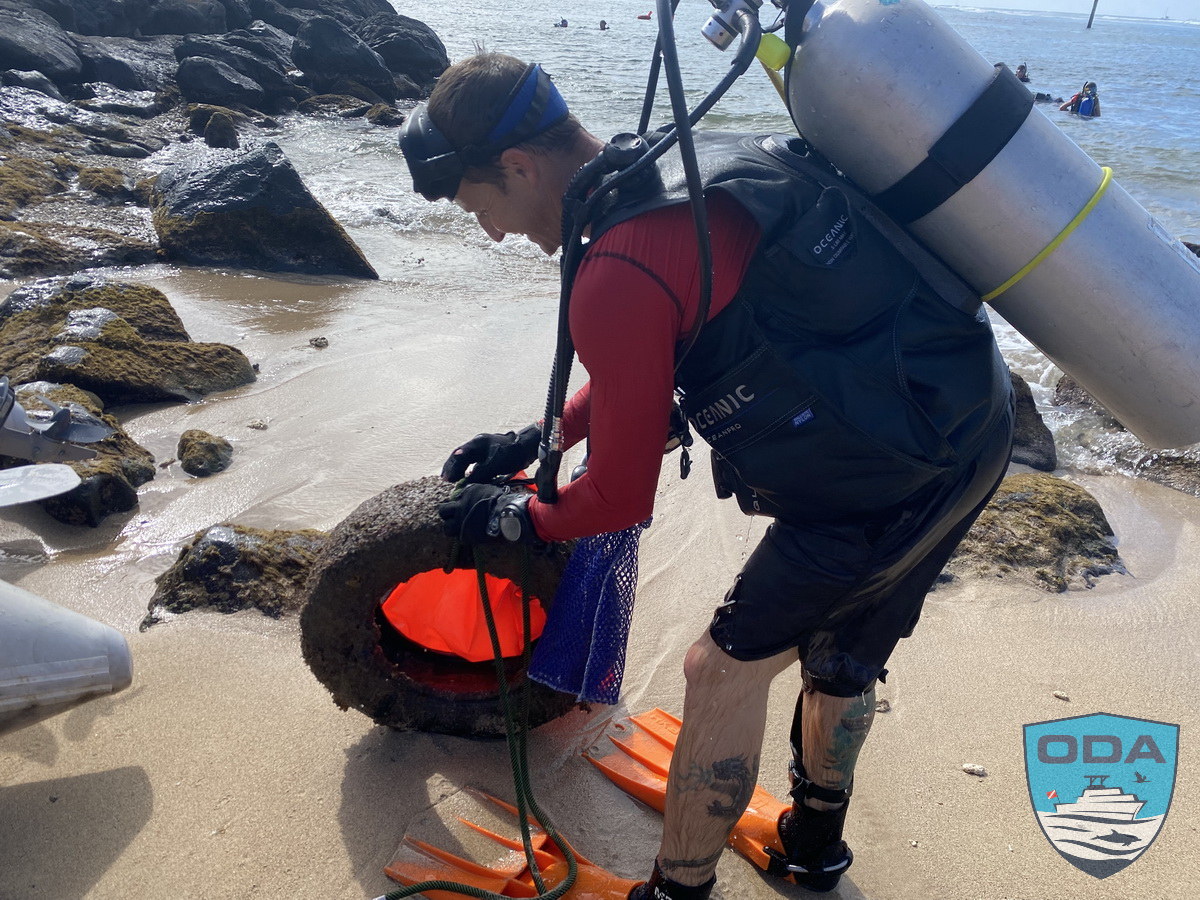 While the divers were battling extremely low visibility and strong surges underwater, we had some people topside also pulling debris from the rocks that make up the retaining wall.  Christine Pang would NOT give up until she pulled out a comforter that was completely buried in the rock wall! 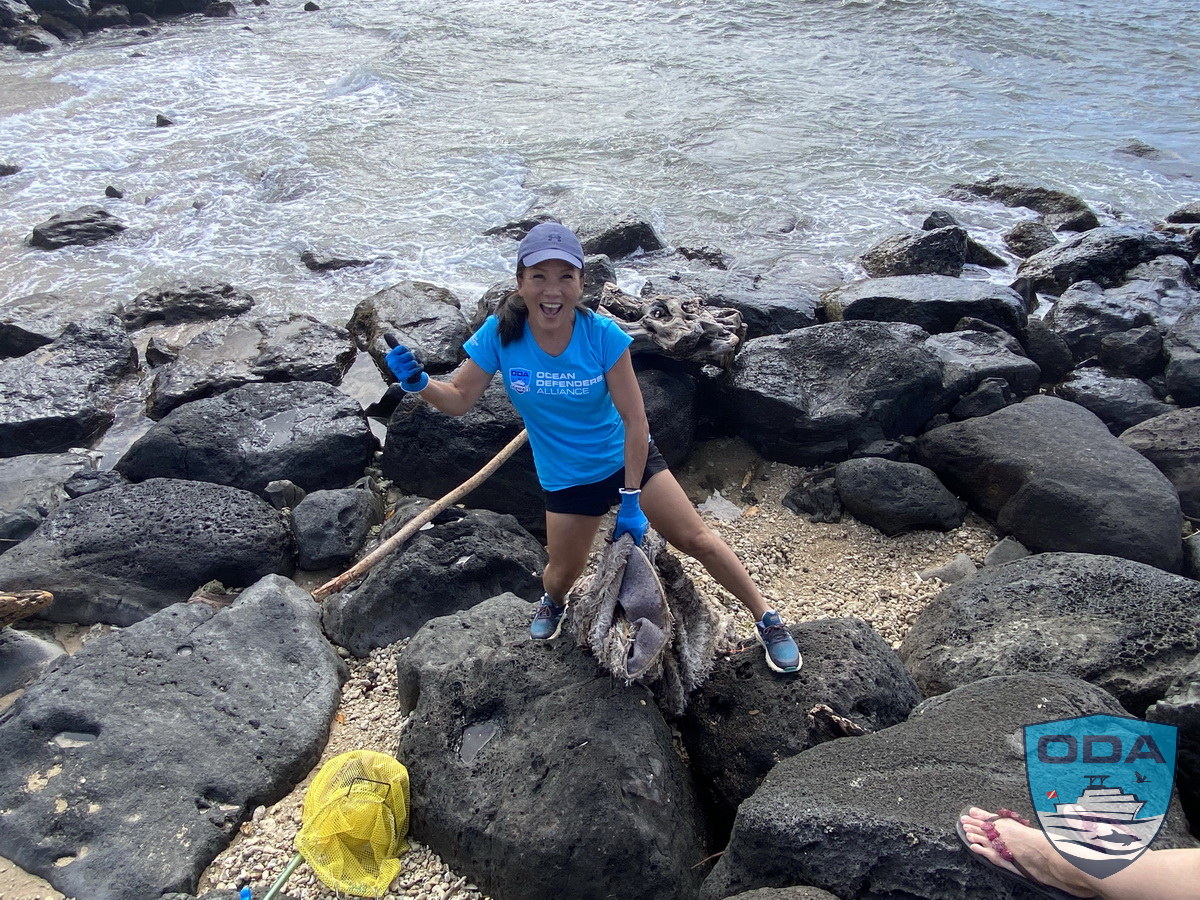 Victory was sweet as Christine wrestled that thing out and hauled it off to be properly disposed! 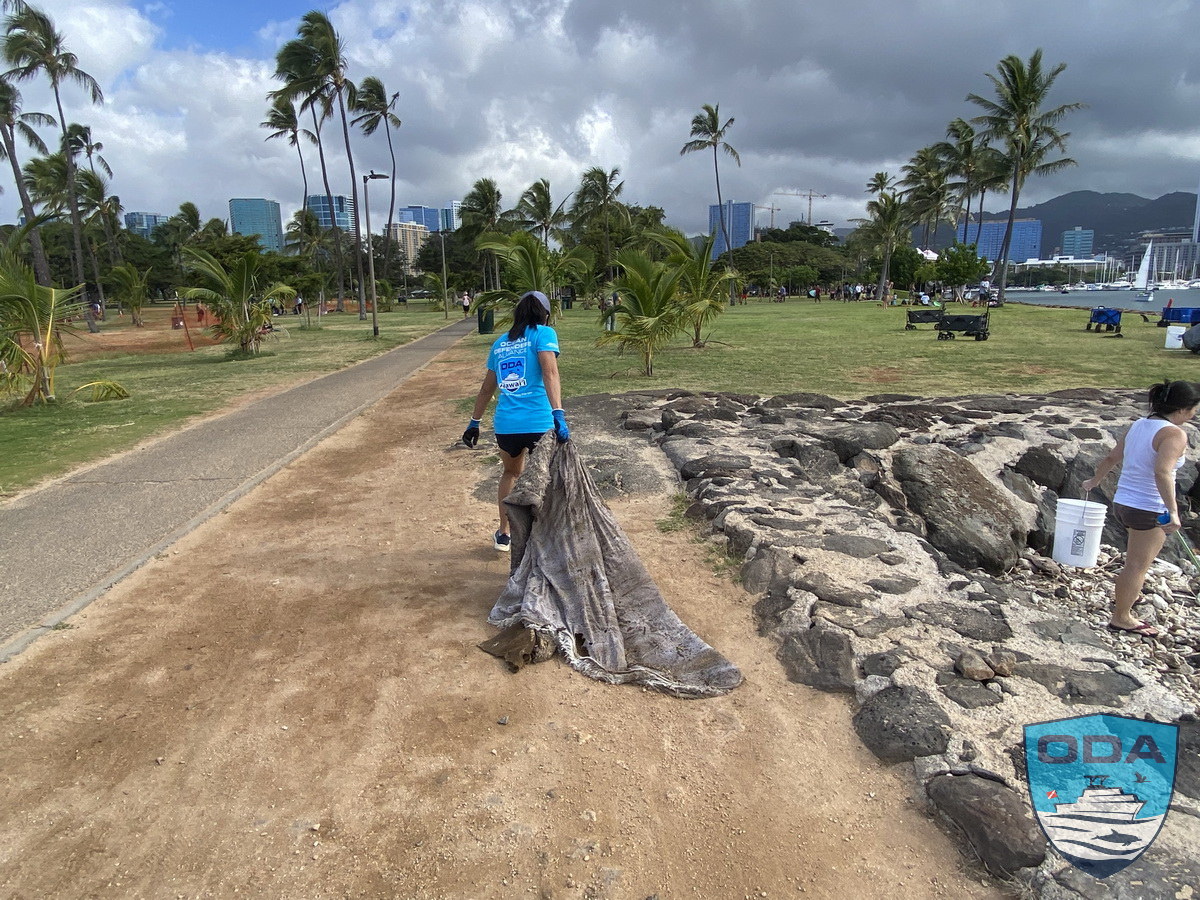 Ray Goody and Andrea Mann and newcomers Jen, Kendra, and Rose also helped in pulling bucket after bucket of trash and debris from the rocks and the beach for which we are so grateful. 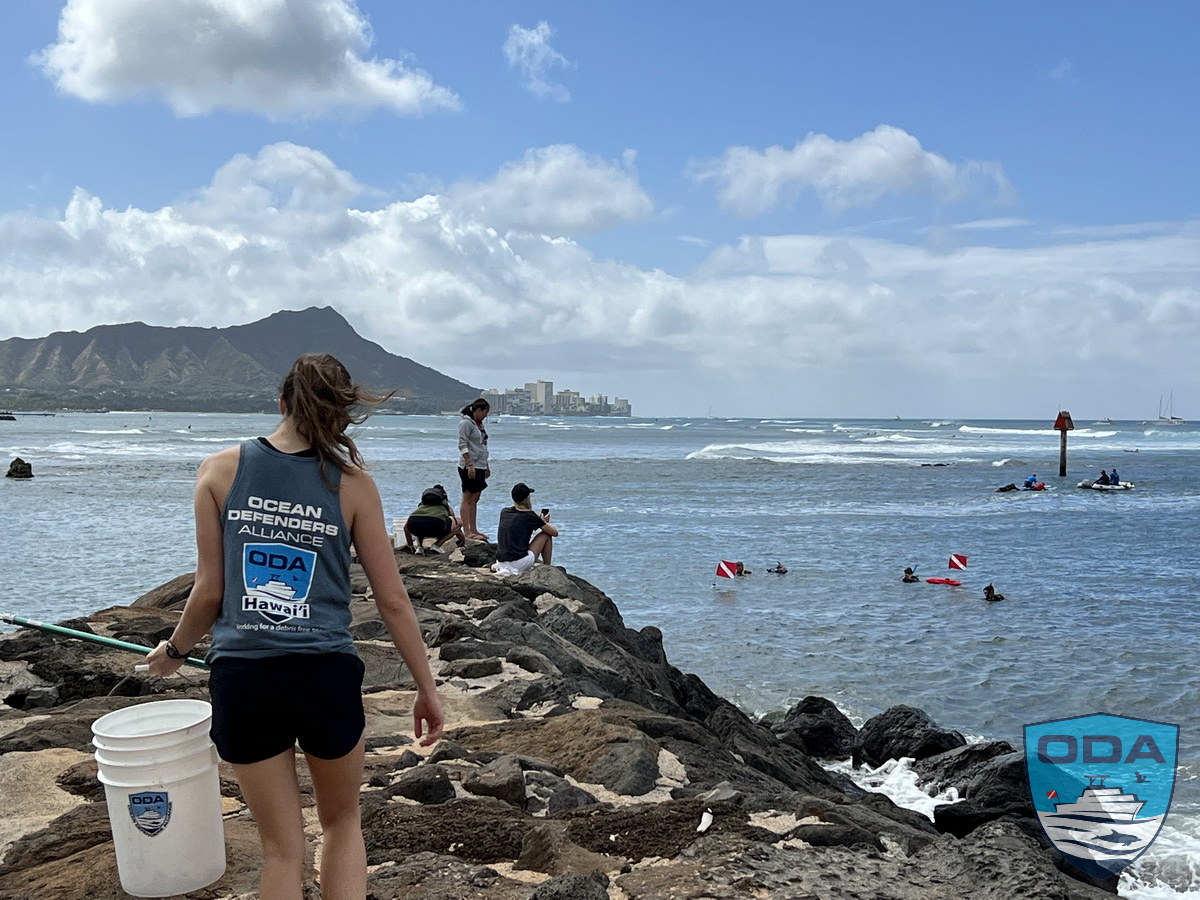 Usually we would share underwater pictures, but as you can see that we didn’t this time… and there’s a reason for that. The visibility was so poor and the surge so strong that it just was not possible to take pictures! But you can see the efforts from the topside pictures that I took as well as some that Leland took. 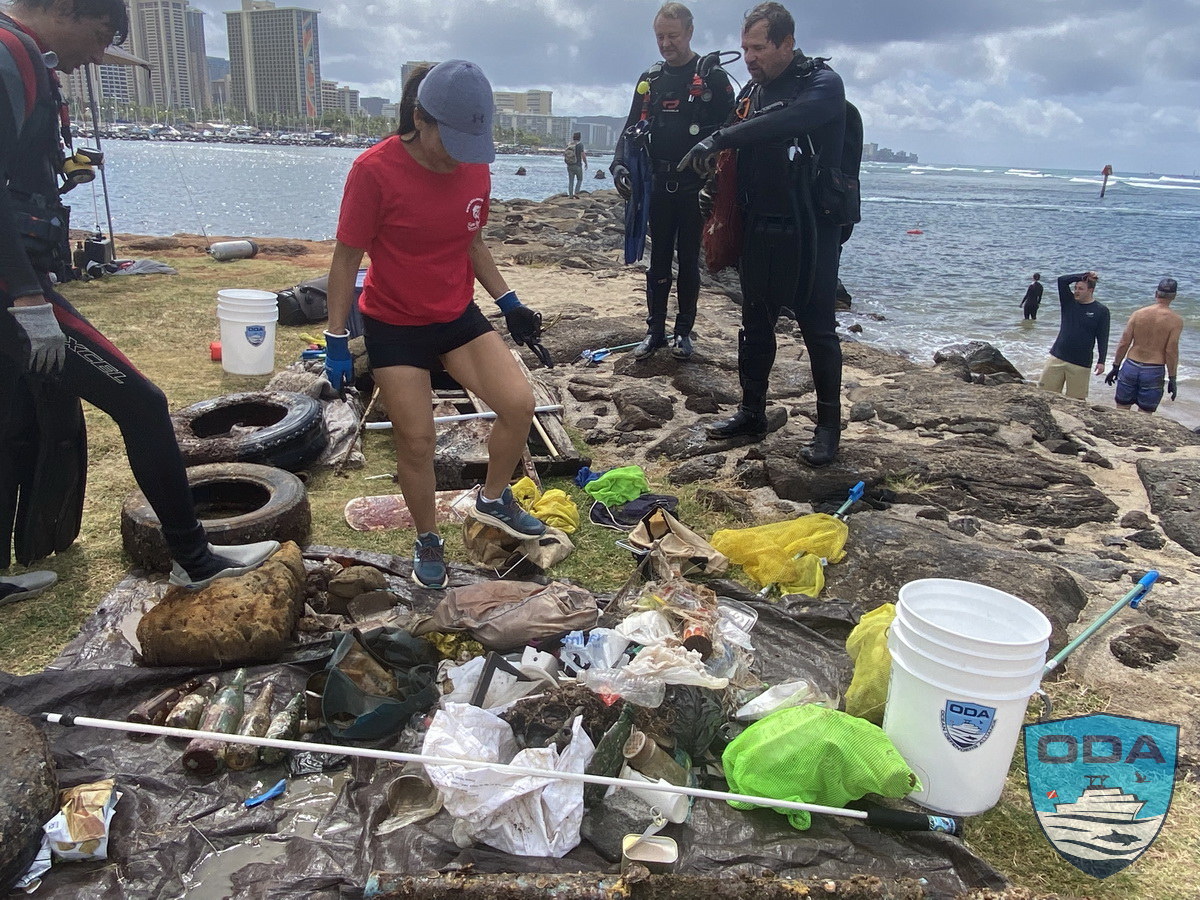 Every now and then, being topside myself, I would hear the surfing competition announcer letting everyone know that there were divers in the water who were cleaning up debris. He thanked us multiple times over the speaker for cleaning the ocean and then went a step further and challenged others (whether on land or in the sea) to do likewise! I was so grateful and thankful for the “aloha spirit” that he showed. He went the extra step and instead of being annoyed that we were in the way, he joined forces with us! Not only that, but as the surfers passed us heading out to sea or coming back in, they also thanked us. A definite camaraderie was formed between our groups! 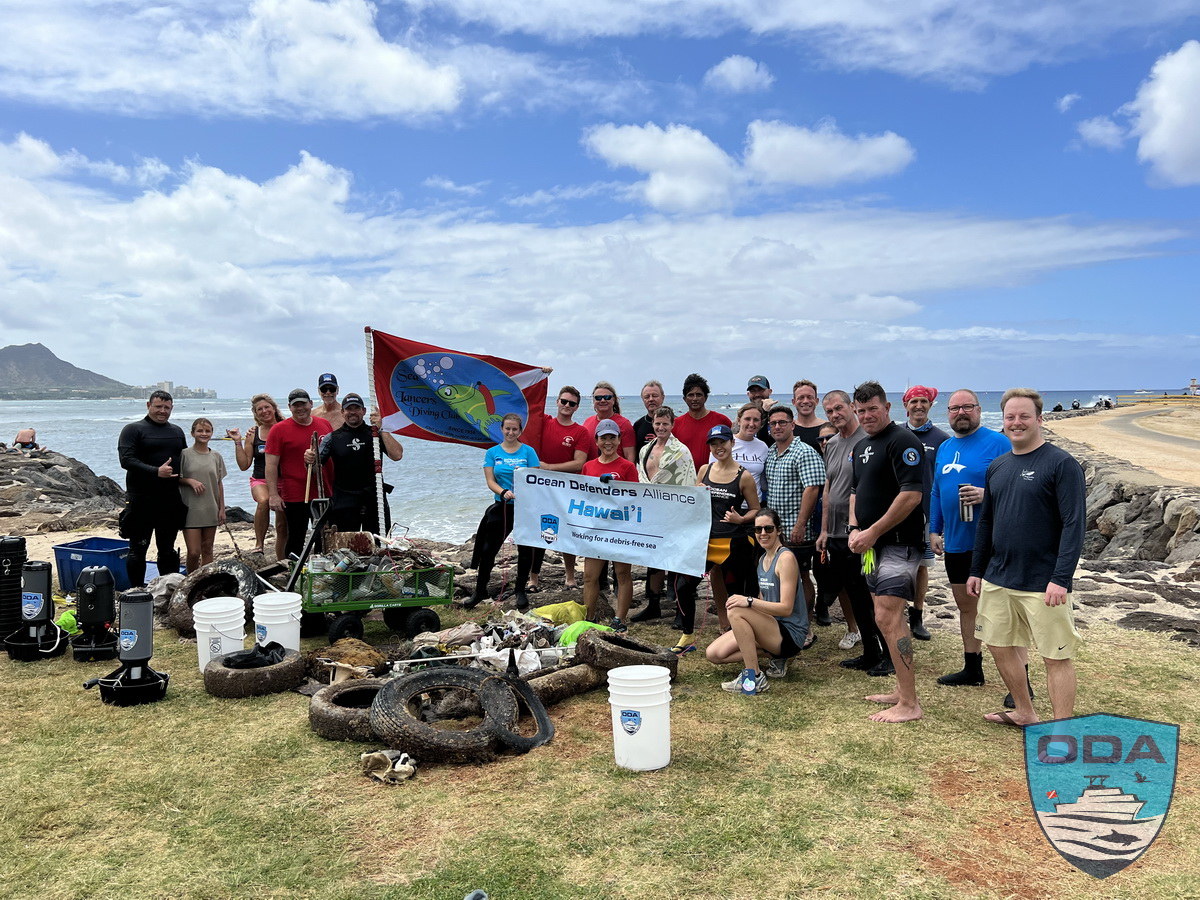 A big mahalo to all the volunteers who came out to help. Thanks to the above-mentioned people: Walker Embrey Mark England, Ray Goody, Leland Hasty, Andrea Mann, Christine Pang, and newcomers Jen, Kendra, and Rose.

Special shoutout to Leland Hasty for the awesome drone footage. Oh yeah! Speaking of that...

You can help clean Hawaii's waters from wherever you are! By making a contribution, you make sure these cleanups keep happening. Thank you for your participation!