It’s been a couple of weeks since we were out on (and under!) the water, due mostly to the fact that I had taken time out to get my Master 100 Ton certification (captain’s license).  The good news: We were back in action on Thursday…the boat filled with six divers thanks to Steve Millington organizing the dive team.

We met at our vessel the Clearwater at 7am and were under way 45 minutes later. Ocean conditions were nice to start with, but there was an unusual layer of low fog covering the area; it was so thick that you couldn’t see the hulls of the boats that were in transit, only the topside of the cabins, and we couldn’t see the break wall, only the top of the LA Harbor lighthouse!

We returned to the area just west of that landmark lighthouse and the divers were in the water at 8:45.  By the time they came up at 9:50 there were four lift bags at the surface for us to pull.  We had two dive teams work, and each had found enough debris to send two lift bags with lobster traps, some that were falling apart and others intact.

After we got all the divers onboard, we pulled the anchor and retrieved the bags.  This took almost an hour.  By the time we had all the recovered debris on the rear deck there was no room to move, so we had to shift most of the traps to the top of the cabin.

As soon as the deck was relatively clear, we anchored about 100 yards from our first dive location and sent down all six divers again.  This time the site was mostly sand, so they didn’t find as much debris, but they did find a HUGE abandoned lobster trap.  It was so big that there was no way to get it onto the rear deck, so we secured it to the transom and towed the zodiac behind us.

We got back to the dock around 1:15pm, and after the guys got their gear off the boat, we tried to move the massive trap to the dock.  This turned out to be very difficult.  It weighed well over a hundred pounds and was very awkward to handle.  It took six of us to wrestle it onto the dock.

All told, our total haul for the day weighed over 400 pounds, and included several hundred feet of that pesky polypropylene line.  The more we get that stuff out of our oceans, the less there is for any more whales to get entangled in it!

Thanks to the dive team, each one a GUE certified diver: Steve Millington (ODA dive team coordinator), Peter Fulks (ODA videographer), Trevor Fulks, Graham Futerfas, Eric Humphrey, and Andy The for taking the time out of their busy lives to dive in and take care of a problem that few know about but affects many lives – marine debris.

Also, thanks to Jeff Connor (ODA First Mate) for assisting all the divers, and keeping the deck safe.  Unfortunately, he got a piece of one of the traps stuck in his finger and the piece broke off. He had to work it out while we loaded more traps onto the deck.  As soon as we hit the dock he took off to get medical treat         ment and after some simple treatment, he is fine.  Talk about giving blood at the office…

I also want to send a sincere thanks to Eric Cabrera for spending a 10-hour day modifying the Clearwater’s dive ladder.  He is a welder, and volunteered his services to make the ladder more diver-friendly by widening the top of the hand rails, adding a step, and putting flat strips of metal on top of each rung so it is easier on the feet.  These modifications may seem trivial, but all of our divers were unrestrained in their praise for how much easier it is to get back aboard the boat after some very strenuous dives.  GREAT JOB, ERIC!

After our dives, as we were heading back to our slip, Trevor told me, “This is so much better than just going out to Catalina to dive.  This makes me feel so much better, knowing that I can actually make a difference.”

I’ll close with a big “Thank You” to all of our supporters out there.  Without your donations, we could not do all this life saving work! 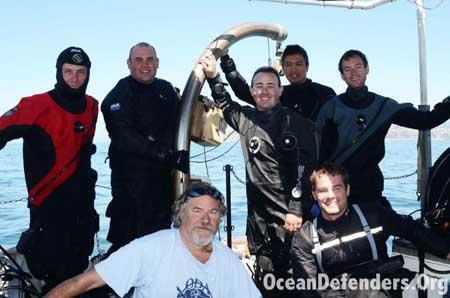 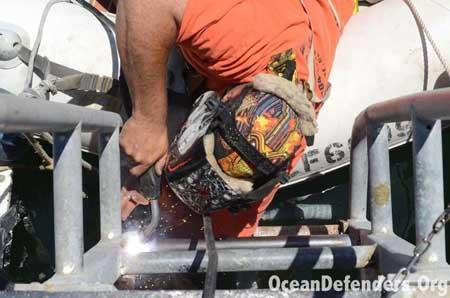 Eric Cabrera, fixing up the dive ladder on the Clearwater. 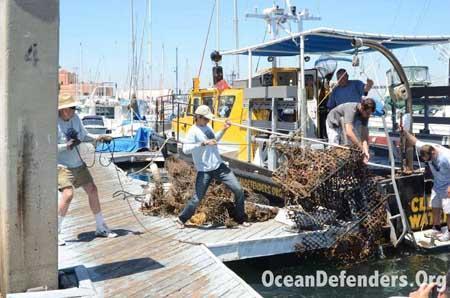 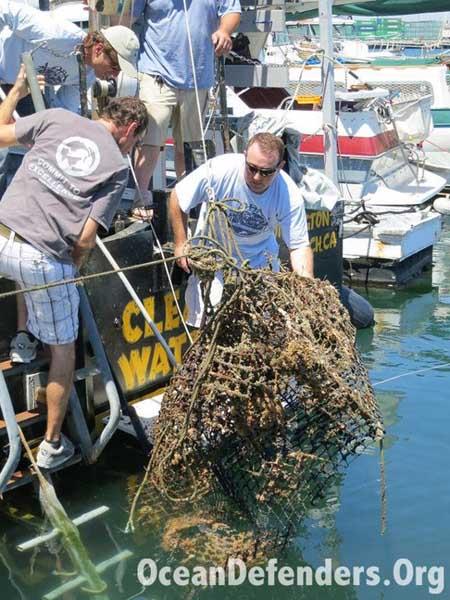 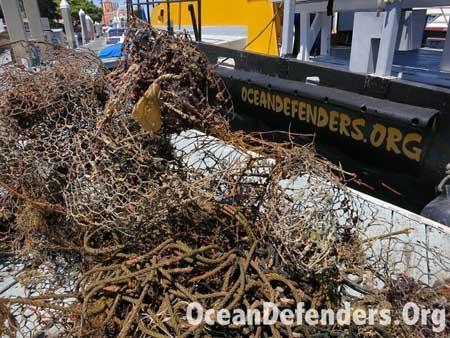 Monster Trap sitting on the dock after being hoisted off the Clearwater. 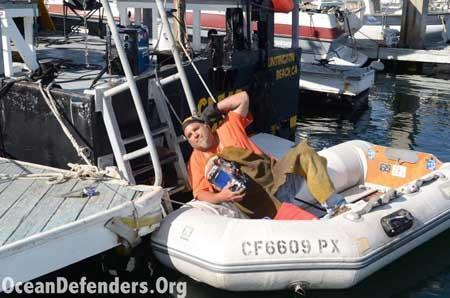 Eric Cabrera after improving the step ladder on the Clearwater.