The Tale of the Malibu Crab Trap

Moral of the story: This crab trap will never get entangled around a whale’s tail!

On Wednesday, December 12th, I received a call from Patricia VanOver Indictor.  She was out on her boat with a group of ladies from the Los Angeles chapter of the American Cetacean Society (ACS).  They go out about once a week to remove plastics from the coastal waters of Santa Monica Bay (SMB).

They were concerned about a trap buoy they found floating on the surface, a short distance from Malibu.  There was a lot of line attached to the buoy, so they tried to pull it out of the water, but it was attached to something on the other end and they couldn’t lift it because it was so heavy.

They took some pictures of the buoy, contacted the California Department of Fish and Wildlife (DF&W), and were told it was a Dungeness crab trap.  Say what?!?!  First off, no commercial traps are allowed to be set in SMB, and secondly it is extremely rare to see Dungeness crab traps set this far south.  They are seldom found south of Point Conception, near Santa Barbara.

Patty had heard one of my presentations a few years ago and remembered that ODA removes this type of ghost gear, so she called to see if we would be willing to try to remove it.

So, I called ODA veteran divers Jeff Connor and Al Laubenstein to see if they’d be willing to help out with this removal.  They didn’t hesitate.  We set it up to take our flagship the LegaSea out on Friday, the 14th.

I told Patricia that she could bring some of her helpers along if they wanted to go out with us, thinking one or two might show up.  But, lo and behold, she had a total of six show up! Her crew included Alisa Shulman-Janniger.  Alisa is THE go-to person when it comes to anything related to the cetaceans that call California home. 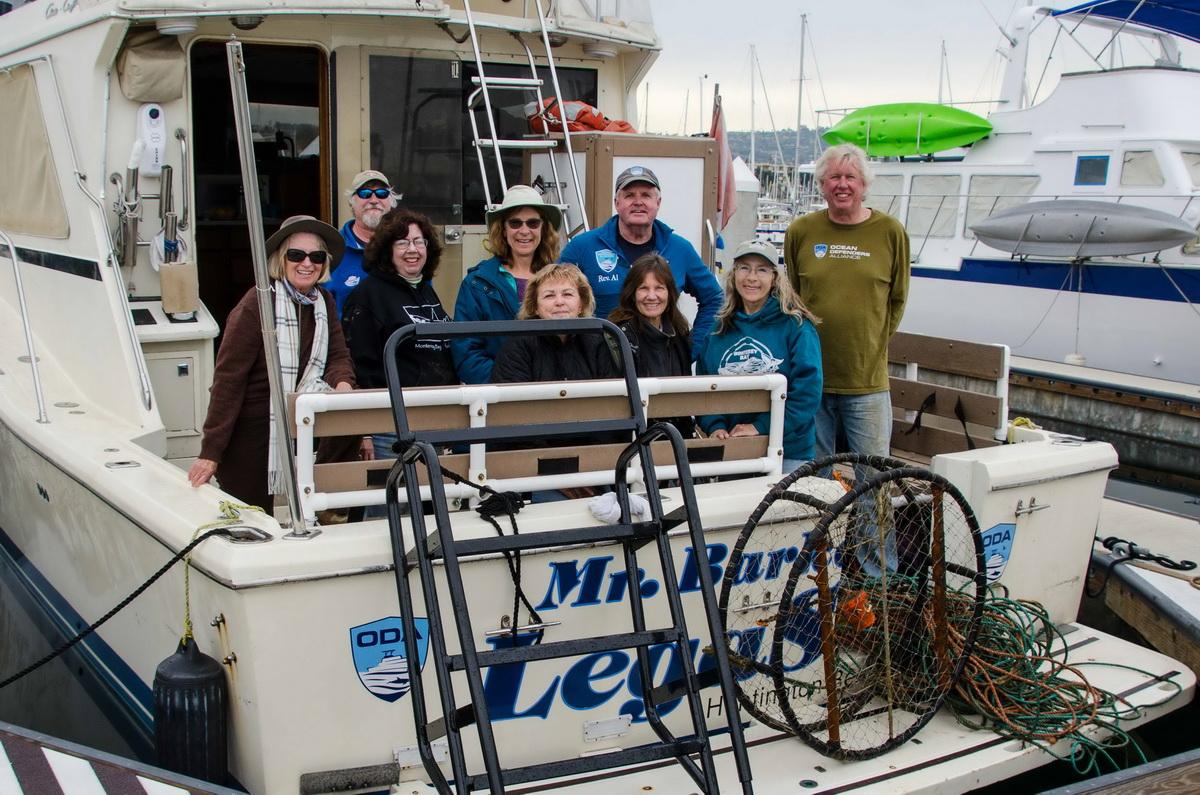 To Remove or Not to Remove, That is the Question!

So, under cloudy skies (which never broke), we headed out from San Pedro to Malibu, about 22 miles away.  The surface conditions were just outstanding, with hardly any waves at all.  An absolutely perfect day for spotting any whales that we might come across on this trip.

Thanks to the new engines in the boat, we made that 22-mile journey in a little over an hour.

As we were making our way, Alisa was on the phone with the DF&W, as well as Justin from NOAA’s Whale Entanglement Team.  She asked if it was okay for us to remove the trap, only to be told that they were not authorized give us that permission.  Hmm…

I then decided that we’d remove it anyway and suffer the consequences if anyone gave us grief for it.  We give these traps back to the fishermen anyway, so it’s not like ODA gets anything out of this other than the satisfaction that we removed one more obstacle for whales to have to navigate around.

Because Patricia and her team had documented the exact location of the trap, we were able navigate our way directly to the buoy.  We pulled up alongside it, and Jeff and Al grabbed the line and started the arduous task of hauling a 125-pound trap, up from 230 feet deep… 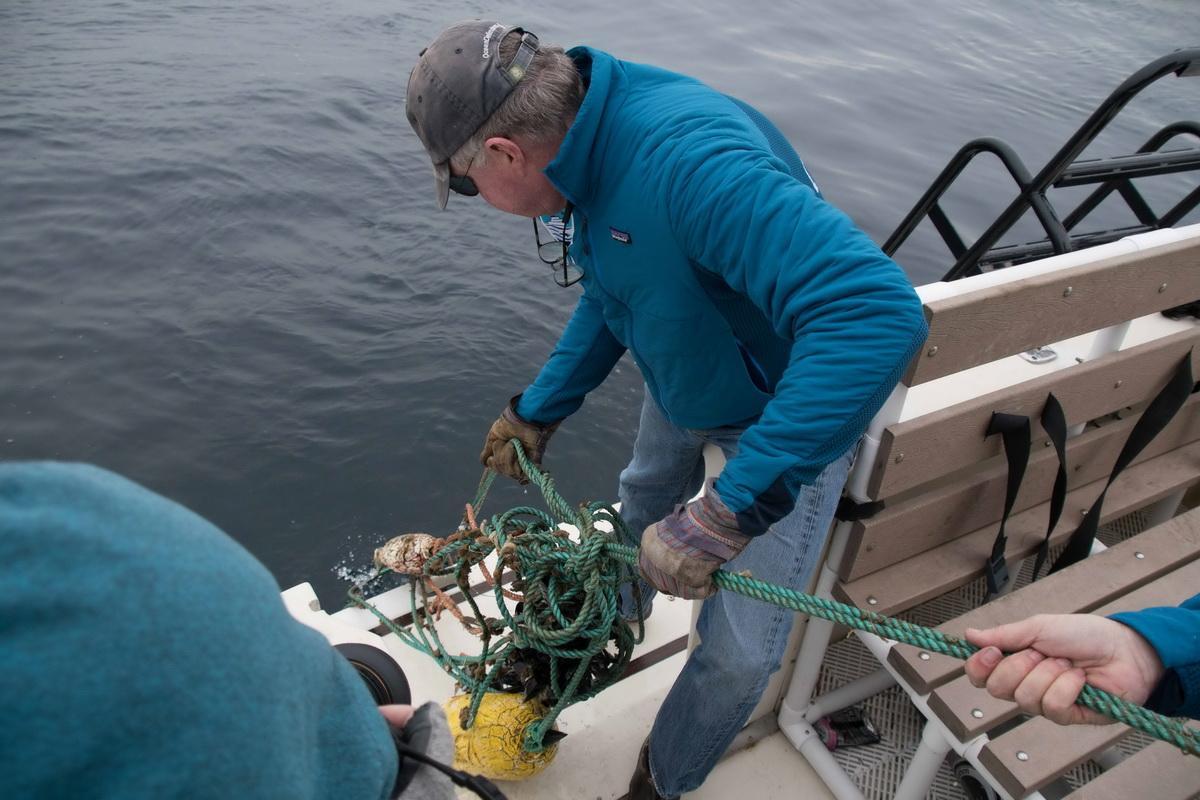 As they were hauling it up, we found dozens of large anemones attached to the line.  We were able to coax them off the line and promptly sent them back in the water.  It took us about 20 minutes to haul the trap onto the deck, but we did it, and fortunately there were no animals stuck in the trap. 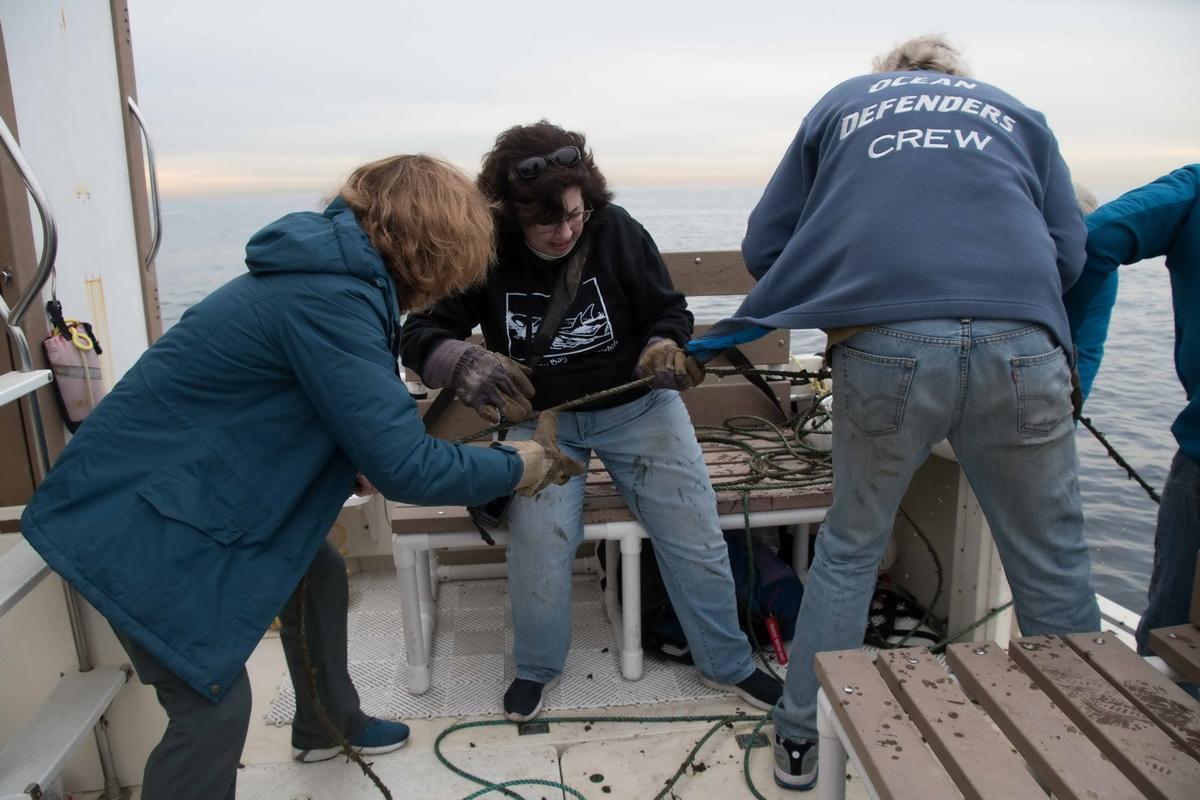 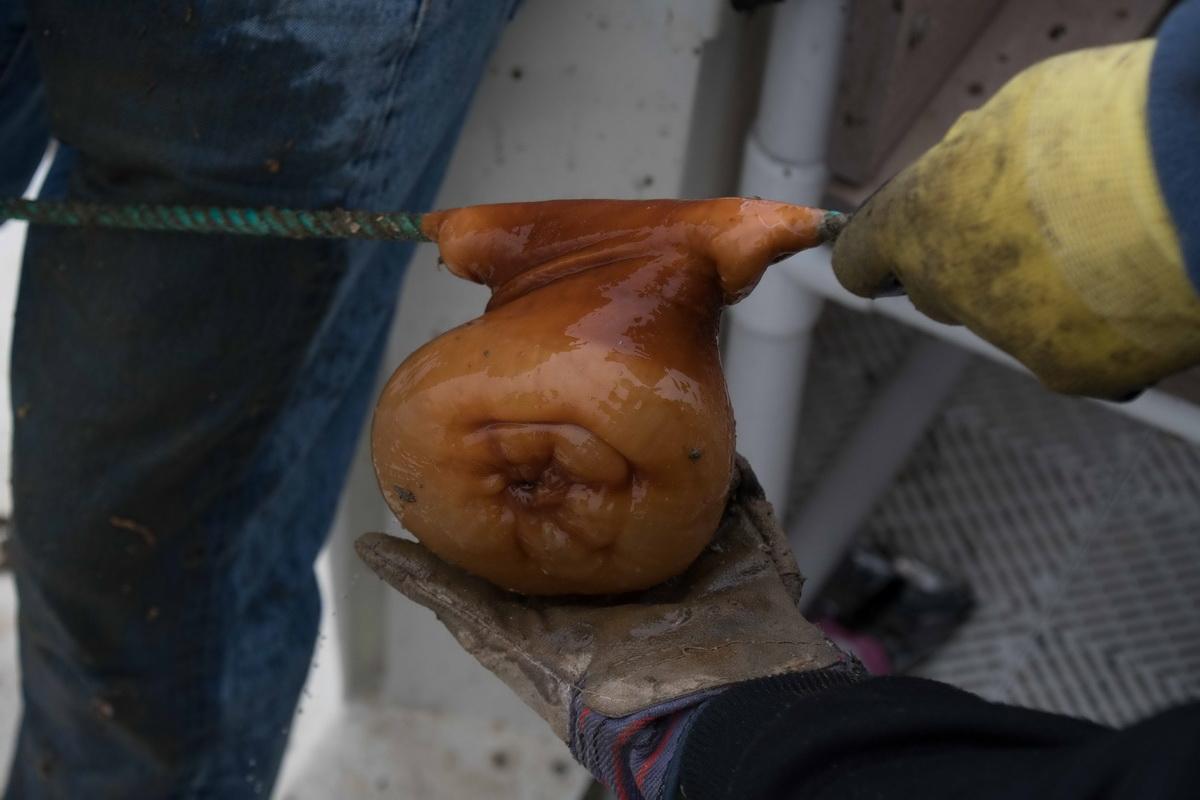 I have no idea how long this trap had been down there, and I guess it really doesn’t matter.  The trap tag indicated that it was legally registered from 2015-2017.  What does matter is that this is no longer a cause for concern for migrating whales.

The ride home was spent talking with everyone about their love for the ocean and especially all things cetacean.  We were hoping to see some whales, but they never materialized.  We did see a few common dolphins and three or four bottlenose dolphins. 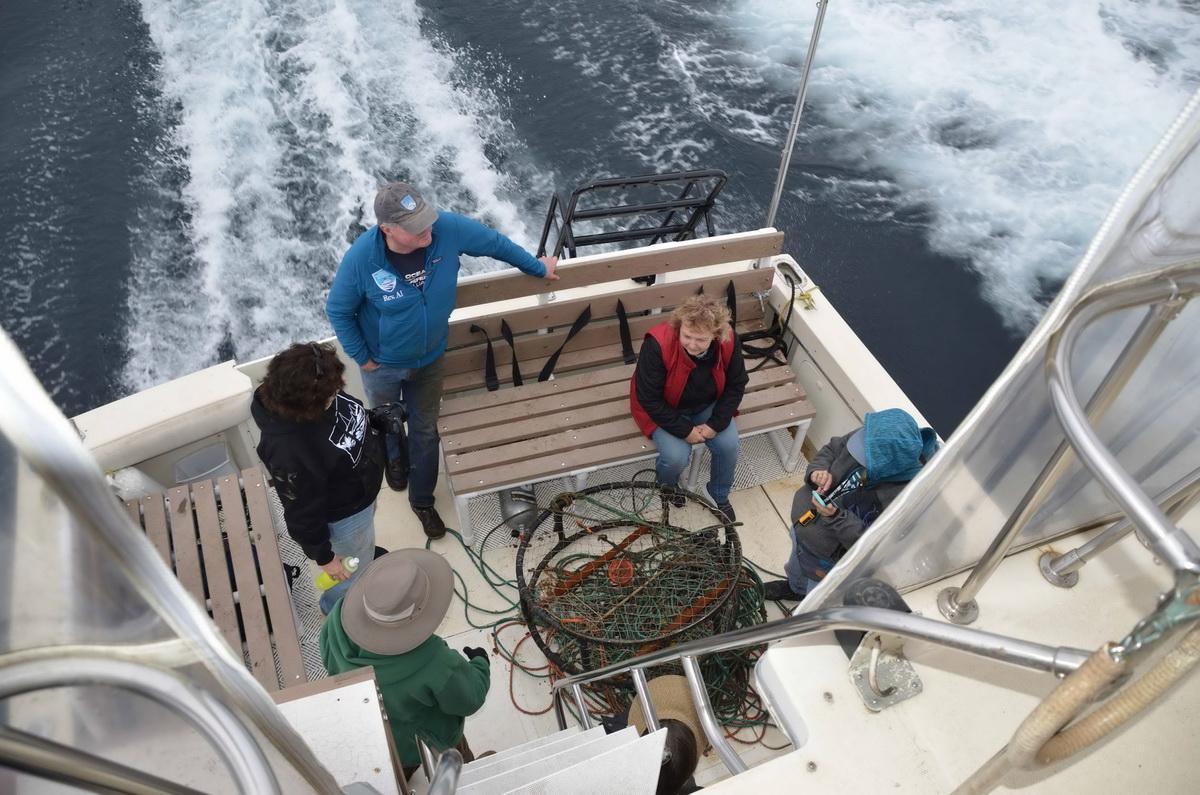 When we were about three miles from the Los Angeles Harbor, we came across a gal in a strange vessel.  It was a large row boat.  As we got closer one of the ACS folks onboard with us recognized what this was all about. 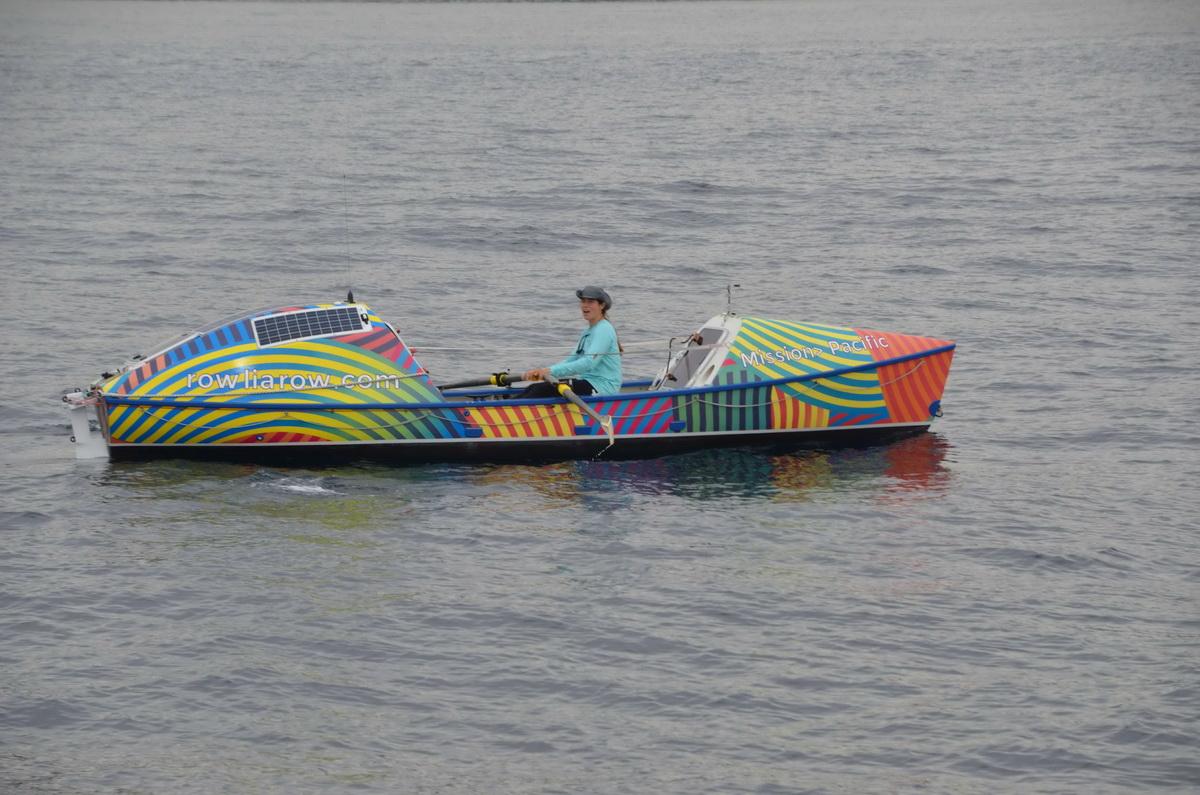 Turns out this lady, Lia Ditton, is rowing AROUNG THE WORLD!  We motored nearer to her and shouted out our awe and support.  She was smiling and seemed to appreciate the vocal support.  Best of luck on your journey!

I want to thank everyone who helped out with this trap removal.  It was a fun AND rewarding day!