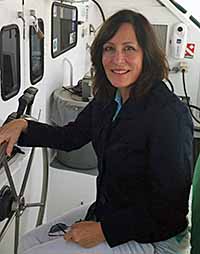 I come from land-locked Elmira, NY where the closest thing to an ocean was the largest Finger Lake -- Seneca. It was there I learned my love for the water whether I would be swimming, windsurfing, water skiing, or ice-skating. At the age of five, I saw the ocean for the first time, not because of my father (who feared the water), but my uncle who transformed into a fun-loving child the moment his nostrils hit the salty air. I knew then I would be back to stay.

It took 40 more years, but by August of 2004, I had made the North Atlantic coast my home. My love for the ocean grew as I learned to scuba dive, paddleboard, and surf. But, it hasn’t been all fun and games.

In 2010, I went back to school to get my master’s at UNCW. There I learned of the problems with plastic in the marine environment and decided to research this malaise for my thesis. The research led me to work with Captain Charles Moore sailing 3,400 nautical miles across the North Pacific “Garbage Patch” assisting with his 10-year anniversary resampling in that region. I also spearheaded annual sampling of the North Atlantic with Bermuda Institute of Ocean Sciences as well as sailing from Brazil to South Africa with 5 Gyres Institute collecting 110 surface samples. In 2013, I sailed around the Fiji Islands collecting samples in the South Pacific. Sailing the cobalt blue became another ocean passion with nearly 10,000 nautical miles at sea to explore. To my chagrin, all 204 samples from the four oceans contained plastics and has fueled my fervor for action and outreach. I founded the nonprofit, Plastic Ocean Project, Inc. in 2012, and working at the University of North Carolina Wilmington, I mentor students involved in marine debris research.

Besides Plastic Ocean Project, Inc. and Ocean Defenders Alliance, I am involved in the following:

I have presented to elementary, junior high, college, and Life Long Learning students, camps and conservation organizations both nationally and internationally. I have a BA at State University of New York Cortland – Communications with a concentration in Journalism, and a Master of Arts and Sciences at University of North Carolina Wilmington – Graduate Liberal Studies.

I am nitrox certified and have dove North Carolina, Bermuda, Hawaii, and Fiji. Like anything, it isn’t until we are under the surface that wecan really understand what is going on. And that is why I support Ocean Defenders Alliance. I have feared for my life because of ghost nets that have fouled our ship's propellors a thousand miles away from land. I have also seen the ill affects of fishing gear on marine life. I am a huge advocate for cleaning up the oceans, but it requires skilled divers with experience in handling dangerous nets, therefore, ODA's debris-clearing work is vital to our country's coastal waters. My work, while focusing on the surface, literally overlaps with ODA and I believe it is essential work done in tandem. 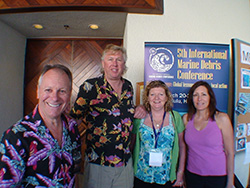 Pictures above at the 2011 IUCN Conference. In the right hand picture (from left): ODA Director Bill Cooper, Kurt Lieber, Jo Ruxton, and Bonnie.

return to Board of Directors