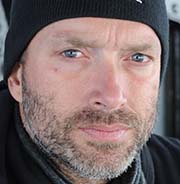 Chuck began pursuing his passion for activism and nonprofit work more than 25 years ago.

“Waking up,” (as he calls it) in the late 1980s, he was soon active with a variety of causes. He participated in forest and wetlands protection with Earth First!; animal protection with a wide variety of organizations; and ocean conservation through the Sea Shepherd Conservation Society where he soon volunteered regularly. Chuck held a number of formal positions at Sea Shepherd through 1998, and returned in 2009 to serve as Sea Shepherd’s Deputy CEO. Through 2011 he co-managed and positively influenced the organization’s global administrative and field operations. Perhaps most notably, he helped secretly acquire and refit the vessel Bob Barker before captaining it to Antarctica—as documented on Season 3 of Animal Planet’s TV show Whale Wars.

Chuck’s activism has led to appearances on Larry King Live and the Huckabee Show with TV celebrity Mr. Bob Barker (of Price is Right fame); and he’s been featured on Fox Business News Live; CNN’s Issues with Jane Velez-Mitchell; and numerous other print and broadcast media outlets in the US, Canada, Europe, and Australia.

In addition to his voluntary and paid work with eco/animal nonprofits, Chuck is a US Army veteran with many years of experience in manufacturing, operations, process improvement, private education, and nonprofit public healthcare. His education includes a B.S. in Business Administration, a professional certificate in Change Leadership from Cornell University, and is halfway to his Masters in Communication and Leadership from Gonzaga. Chuck is also a member of MENSA, the international “high IQ” society.

Chuck has known ODA’s Founder and President, Kurt Lieber, since 1992. They have served together at sea, and Chuck has been on ODA’s Board of Advisors for several years.

While seriously dedicated to the protection of ecosystems and animals, Chuck maintains that a good sense of humor and positive attitude are critical to the success of any movement. He has been heard to say, “We should take our mission seriously, but never ourselves.”