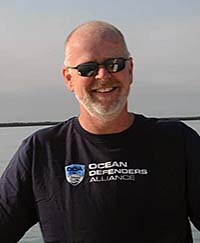 I was born in Melbourne, Australia in 1962 where, as I was growing up, I had the opportunity to develop a passion for the sea in the form of diving and sailing. I’ve been fortunate over the years to travel fairly extensively in my role as a Visual Effects Supervisor and a career move in 1990 took me to Auckland, New Zealand, back to Sydney in 1998, eventually arriving in Los Angeles in 2007.

Taking up Graphic Design in High School I went on to complete a Bachelor of Art in Graphic Design in 1984, where shortly thereafter I was hired at the third of the Computer Animation and Effects companies set up in Australia. It was early days and the technology was in its infancy but I was fortunate enough to continue using the right software and develop the right set of skills that have lead me to my dream job as a VFX Supervisor for MPC (The Moving Picture Company) in their Los Angeles office.

The skills that I can bring to the Ocean Defenders Alliance revolve mainly around my technical diving experience. Currently I hold a CCR (Closed Circuit Rebreather) Trimix Level 3 qualification which enables me to dive to the limit of my equipment, which is 200 metres (650 feet). Basically it qualifies me to perform deep dives of long durations.

To give you a bit of my diving background I started diving in 1976, technical diving in 2000 and then moved exclusively to rebreathers in 2004. My rebreather experience has been pretty extensive starting with the “Sydney Project” in Australia, www.sydneyproject.com, where our mandate was to discover new wrecks along the New South Wales coast. We had a few successes while I was there finding a number of historically significant wrecks in depths ranging from 75 to 135 metres (250 to 445 feet). I’ve been involved in a couple of ‘specialty’ projects of the years including support for Sacha Dench where she, at the time we believe, performed the deepest freediving penetration of a wreck in the Southern Hemisphere, www.youtube.com/watch?v=UeliAGbyCm4. But definitely the highlight of my diving career thus far has been the AE2 Expedition where I was part of a team that surveyed an Australian submarine lost during the First World War in the Sea of Marmara, Turkey, in 72 metres (240 feet) of water, www.youtube.com/watch?v=H5VR3z_QQ9M.

What attracted me to the ODA was being able to take my skills and apply them from a purely recreational pastime to a working situation that actually does a bit of good for the environment. The challenge of planning and successfully executing net removal from some of the deeper targets is something that I particularly enjoy.