A Heavy Day for All Divers

As I was boarding my plane in Hawaii to come back home to southern CA, I received an email that shook me and the entire dive community to our core…

In the early morning hours of Labor Day, Sept 2nd, 34 people lost their lives in a fire aboard the dive boat, Conception.  The news came totally out of the blue, as NOTHING like this has even remotely happened like this on any dive boat in California before.

Just about anyone who has been diving in CA had been on the Conception at some point in time.  It was one of the most reputable boats out there.  I had been on it several times going out to Santa Cruz, Santa Rosa and Santa Barbara Islands.  All my trips on that boat were fun, rewarding and filled with adventures.

Hearing that news brought ODA to a halt.  Not knowing what had happened, made us all think about how we could make our boat, Mr. Barkers LegaSea, safer.

I sent around an email to our core volunteers, and asked their thoughts on what we could do to be better prepared for an emergency aboard our boat.  Due to those conversations, we figured that there really wasn’t much more we could do other than replace our older smoke detectors with new ones, and put more fire extinguishers in high visibility areas.

So the LegaSea is ready for action again, and even though our hearts are heavy for the loss of all those wonderful souls who perished that day, we are going to push on and keep them all in our memories. 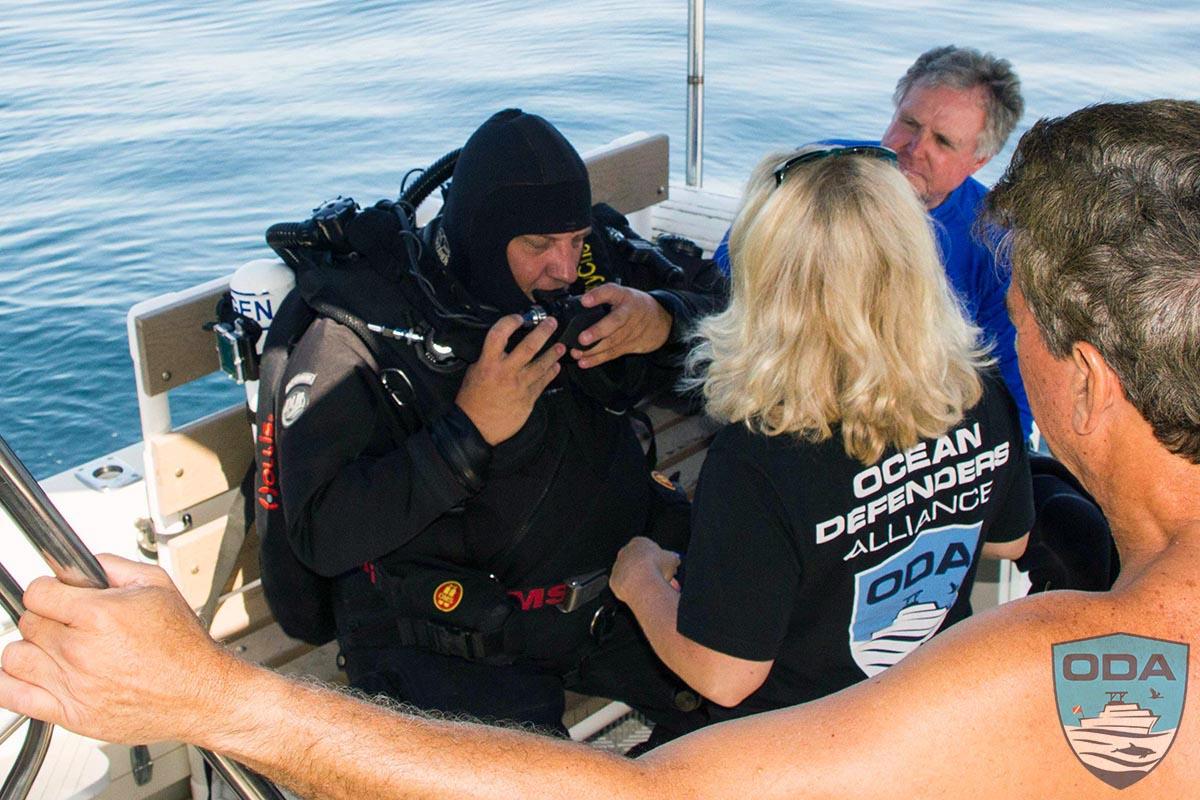 Despite that heavy day, our divers pulled up a heavy load

Even though I was not going to be able to make the dive on that day, I had been talking with Sheldon Jones about taking my place as the boat captain.  After he discussed it with his wife, Trisha, he gladly said yes.  With the caveat that she would go along too.  Can’t say no about having a new volunteer helping out.  Thanks you two!

The crew met up in San Pedro and headed out to the African Queen to pull more of that nasty net that we’ve been working on for months now.

The divers this time out were: Dan Eisenbeisz, Al Laubenstein, Billy Stedman, Bob Walls and Mike Wynd.  Helping out on the deck were Jeff Connor, Lisa Davis, Linda Flores and Jim Lieber. 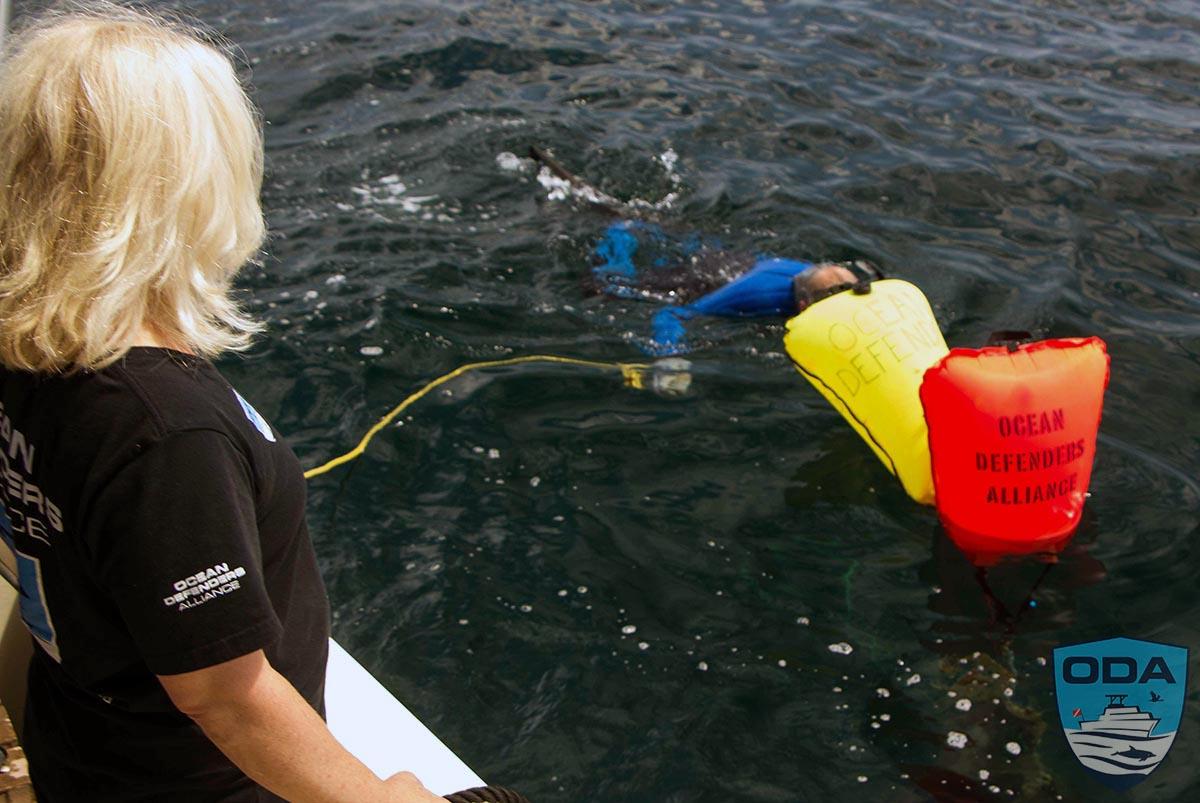 When they got to the site the GPS unit was fritzing out, so Sheldon and Jeff spent the next half hour trying to figure out what was wrong.  They finally got it working and the divers were in the water around 11am.

As is usual for our divers, the lift bags started floating to the surface a few minutes after they descended.  Always a welcome site!

Dan, Al and Bob surfaced first and climbed back aboard.  But things were getting pretty crazy with several boats veering really close to our boat and putting our divers at risk of being run over if they had to surface away from our boat.  Our divers always use the anchor chain to make their way to the dive site and back up again at the end of the dive.  But if they need to surface in an emergency and can’t get to the chain, they could be at serious risk if any boats are running over the area where they come up.  Sheldon and Jeff did their darndest to alert those boats, but most of them weren’t paying attention even though the dive flags were up to alert them that divers were in the water.  Boaters are supposed to stay at least 100 yards away.  Unfortunately those boaters were negligent.

When Billy and Mike surfaced an hour later, the entire crew decided to call it a day for safety reasons. 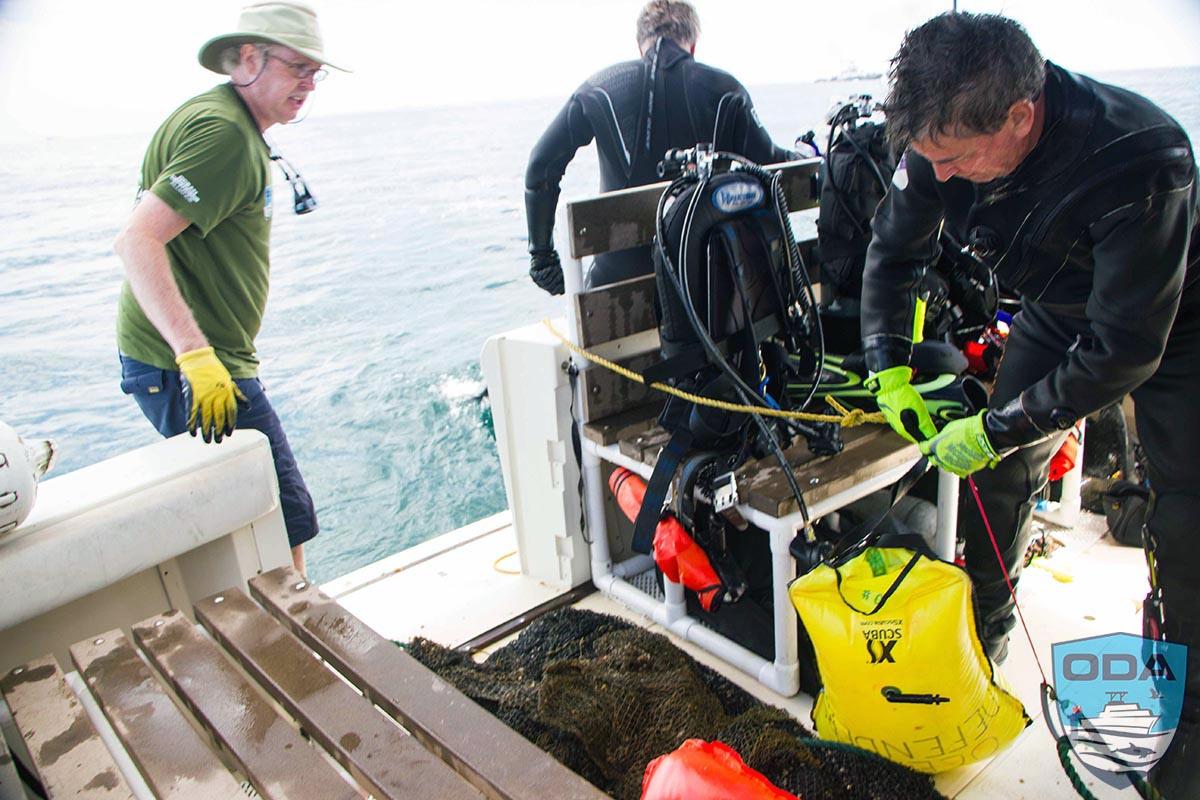 So, they pulled the anchor and positioned the boat to start retrieving the lift bags.  And once onboard, you could see that they still had quite an impressive haul.  About 200 pounds of squid net will no longer be down there harming or killing our precious wildlife.

We have to congratulate the entire crew.  They did all this with the thoughts of the Conception disaster hanging over their minds all day, and then being put in harms way by out of control holiday boaters.