A Season to Give Thanks

By Founder and President Kurt Leiber 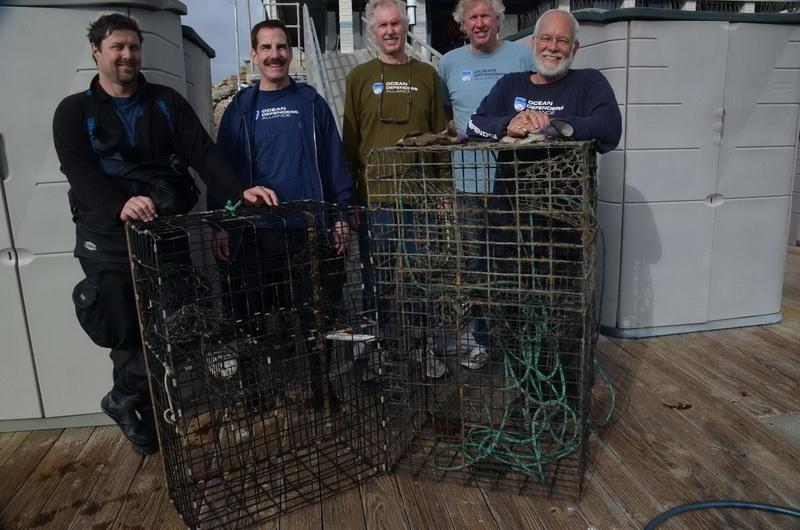 ODA gives thanks to all you lobster lovers!

As we worked through Thanksgiving time and right into the middle of the holiday season, ODA remains actively committed to giving the gift of Clear Water to the ocean wildlife this winter.

Mid-month, we kept up our vigilance by heading back to the Channel Islands Harbor breakwall and doing something we hadn't done before: explore the marine habitat under the commercial boat slips inside the harbor itself.

While talking with Jack Peveler and Tom Bazemore of the Harbor Patrol about ODA's activities; they asked me if we would take a look underneath a couple of these slips, scout out what is there, and come up with a plan to remove whatever was found.

What an eye-opener this turned out to be!  Despite really bad visibility in the harbor, ODA Dive Crew Kevin Augarten and Jeff Larson jumped in and took a look.  Despite the 3-foot visibility, they were able to see that there was a LOT of junk under there.  Rubber tubing, milk crates, alternators, computer screens and a plethora of un-identifiable stuff, including a shopping cart and-literally-a kitchen sink!

In addition to choking up the water with its bulk: this collection of human-dumped debris was full of toxics, plastics, and other bad-for-the-ocean junk.

Now that we know what is down there, with the Harbor Patrol we are going to organize a cleanup of this area.  If you are interested in helping out by diving or helping haul the stuff up onto the docks and transport it to some waste bins, please contact us today!  We plan to do this on Saturday, December 14th.  Please contact me at if you would like to participate in this much needed cleanup effort.

And now…back to our action report!

After that muck diving, we headed out to the harbor breakwall.  We had GREAT conditions there, with 20-foot visibility and not much in the way of wave action.

Kevin and Jeff jumped in with their DPV's (Diver Propulsion Vehicles, AKA underwater scooters) and within minutes we saw a lift bag rise to the surface.  ODA Boat Crew Jim Lieber and Tim Pearson already had the zodiac in the water, fired up, and ready to go.  They quickly attached a line to the bag and hauled it over to the boat.  Jim and Tim got back on the Clearwater and we soon had a huge trap onboard; inside was a surprise gift for us:  Three really big, healthy lobsters were trapped in it!

Well, you can imagine our delight when we were able to set them free!

In the meantime, Kevin and Jeff were continuing their way north and found two more traps.  By the time we had picked up the divers and gotten them aboard, the lift bags had been carried by the currents and were now very close to the breakwall itself.

Jim and Tim managed to get a line attached to one of them so and haul it over to the boat, but the other one crashed into the rocks.  The lift bag got punctured, deflated, and we could not find it due to a sudden high surge on the rocks.  DANG!  Because of the rough conditions we were forced to leave it there, but we know where it is and will go back next time and retrieve it.

When we got everyone back on the boat, we hauled that trap up and were pleasantly surprised to find four more lobsters in it.  Release time!

We motored over to a rocky outcropping to release our new friends.  By this time the guys had become fond of them and given them names.  Each guy got to release his newfound friend.

It was an exhilarating and productive day, and ended one of our best runs ever.  Over the course of eight days, we removed eight traps, 120 pounds of net, 650 feet of polyline, 300 pounds of debris…and freed one large sheepcrab and 22 lobsters.  TWENTY-TWO LOBSTERS!!  Remember: this is important, and lobsters are predators and eat organisms that damage kelp forests-and kelp is sort of the "tropical jungle" of the ocean, providing shelter for various marine flora and fauna!

I followed up that incredible week by giving two presentations about ODA and the issue of ocean debris.  One was to the Laguna Sea Dwellers Dive Club on Wednesday, the 20th.

I'd last spoken there three years ago, and it was great to see so the familiar faces of Debbie Karimoto and Joe & Cara LiBurdi, and finally meet face-to-face with some people I'd only emailed with.  Nice to finally meet you, Mike Bartick!

Then on Friday, the 22nd, I spent all day talking with some very enthusiastic young people at La Mirada High School.  I gave six presentations to the biology and science classes of Karen McDonald-Emge and Patrick McGrath.  I gave them an introduction to ODA via a 30-minute video and followed that up with a 20-minute Q&A.  I love this interactive part of the presentation, because I get to hear observations and concerns that our children want to talk about.  I had a GREAT time and I feel most students enjoyed themselves-and learned-as well.  I only saw two of them napping the entire day.  I think any teacher would be happy with that statistic!  ;)

Happy and Healthy Holidays…for Oceans, too!

So, as we leave Thanksgiving and Hanukah behind and move toward Christmas, I wish you all happy, safe, and warm times with your friends and family.

Thank you for your support and interest, and for helping keep our oceans free of dangerous man-made debris. We are committed to working right through the holidays and into the New Year.

From myself, the ODA crews, and the 22 lobsters that are now living their lives out naturally in their salty homes: Happy Holidays!!!