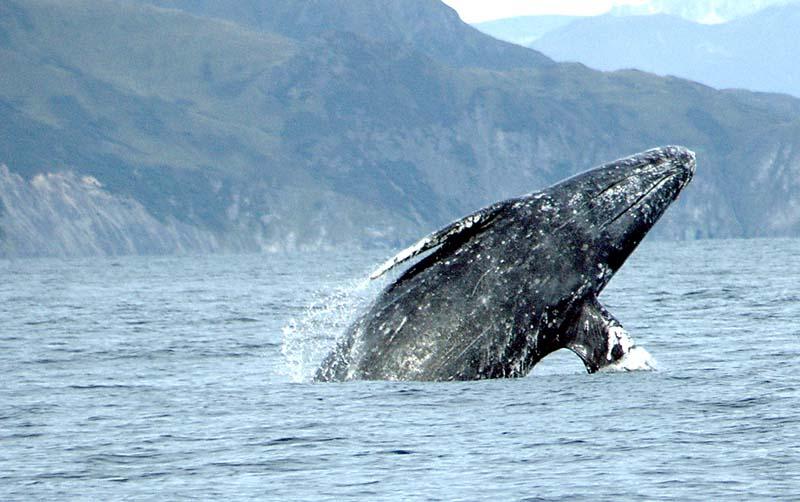 A traffic jam of whales off the coast of California!

They quoted the captain of a whale watching boat who said they have recently seen all kinds of whales in larger numbers than ever before, including orcas, sperm, humpback, blue, and fin.

With all these whales passing through coastal waters, it is imperative that ODA remove the dangerous lines and nets that lurk below the surface waiting to snare these magnificent creatures.

Especially susceptible are gray whales, because they are bottom feeders and can more easily become entangled in deadly man-made debris. 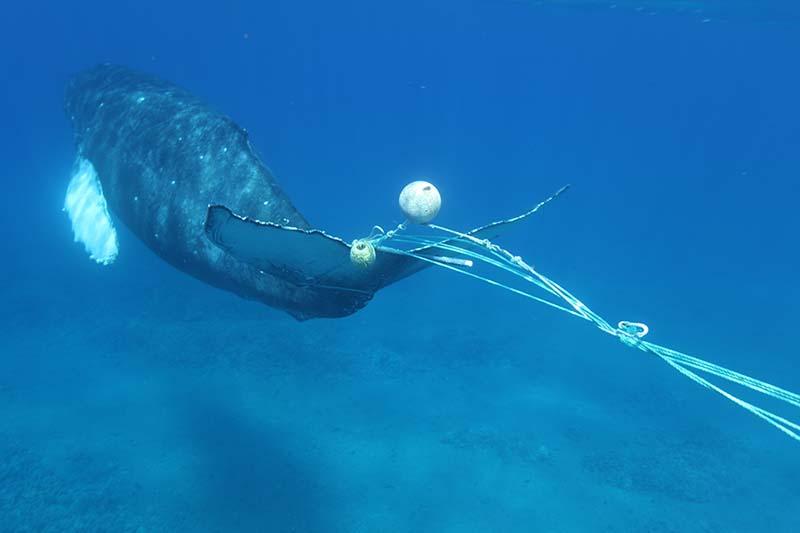 Recent insights into humpback feeding behavior helps us understand the risk they face from marine debris when scientists attached video cameras to the backs of some of these whales.  For the first time ever, we could follow whales and document their activity.  Researchers observed humpbacks diving to the ocean floor and rolling along the bottom as they scoop up fish...which offers an excellent example of the value of ODA's work.  We clear the way for these animals, so they can eat, live, and thrive without the risk of entanglement and death in abandoned fishing gear.

ODA's crews have removed many tons of abandoned commercial fishing gear that these whales-and other marine wildlife-might get caught in when they dive, swim, or feed.

During a debris removal expedition in 2012, my volunteer crew and I were SCUBA diving to pull up some abandoned commercial fishing equipment.  In 60 feet of water, we spotted abandoned traps on a natural reef.  The purpose of the traps was to catch periwinkle snails, an invasive species that's wiping out local native snail populations.  Ironically, these traps are not set by people concerned with the oceans: rather, the snails are considered a delicacy in Asian markets-so commercial fishing operations drop traps onto living reefs, causing much damage to the reefs.

When we mention periwinkle or lobster traps you might think, "What harm could they possibly cause to whales?"  Well, both trap types create unintended and devastating "collateral damage."  Regarding periwinkle traps: fishermen fasten them together in groups of three to five in a row with 100-foot lengths of polypropylene line between them and on both ends-and with floats attached along the entire set of lines.  The floats cause the already buoyant line to arc up from the bottom.  Once in place, the lines float in the water until the fishing boat comes back to get them. 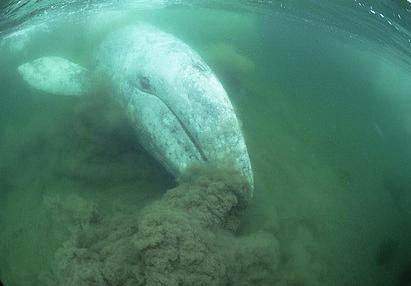 Imagine these traps: 50 feet apart with 100 feet of line between them.  The floats and buoyant line create big arches rising between the traps sitting on the bottom.  This is where the trouble starts.  We just described the humpback whale behavior above.  In addition to this: gray whales are bottom feeders, so when they swim through, they often become entangled in the line and drag it with the traps still attached.  This weighs them down, causes abrasions on their skin, tires them, and they often drown as a result of these entirely preventable circumstances.

Individual lobster traps are slightly less hazardous because they only have one line each, but the overall risk they create is much greater because there are many more of them…and whether or not they have floats attached, these buoyant lines rise and drift through the water.  Imagine the whales moving through-their flukes horizontal most of the time-and you can understand how the line can wrap around, become entangled, and turn a casual migratory meal into a death sentence.

Back at our dock after that 2012 trip, we untangled the trap lines we'd collected and laid them out on the sidewalk to document how much we had recovered from this single debris removal dive.  The ODA Dive & Boat Crew was stunned to discover the lines totaled a staggering 1,000 feet!

In 2012 we know of six (yes 6!) unfortunate and avoidable whale entanglements in Southern California alone, and three of these whales died.  We are certain that more entanglements occur than are known/reported, which is one of the reasons ODA is so proactive: with your help, we eliminate the problem-causing nets and lines before they strike!

Please be a debris-remover from right where you are, and support this important work today!