A Tale of Two Cleanups

This is a story about how two awesome, self-motivated ODA volunteers (and a Disney employee!) have taken it upon themselves to gather together fellow ocean-lovers to physically reduce the amount of plastics that enter the Pacific Ocean. 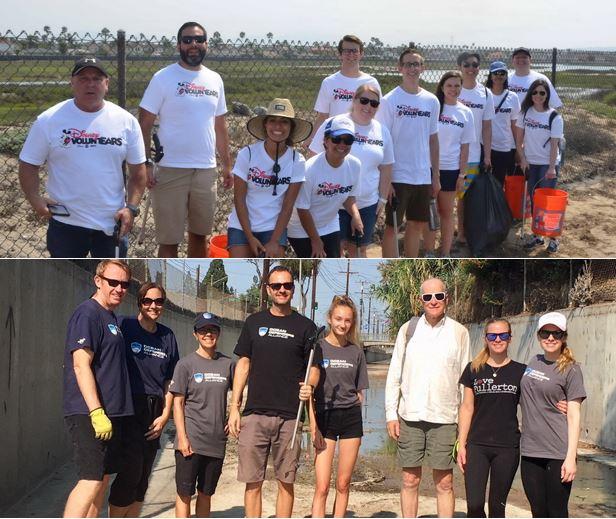 Cheryl McCarthy has been removing plastics from the beaches where she lives in Dana Point, California for several years, even before she heard of ODA.  When she found out about ODA, she started volunteering with us on our underwater cleanups.  Then in 2014, she took her involvement to another level and started contacting local companies that she thought might want to donate funds or resources to ODA.

One of those companies was The Walt Disney Company (Disney).  Cheryl found out that Disney has a program in place that encourages employee participation in community projects. 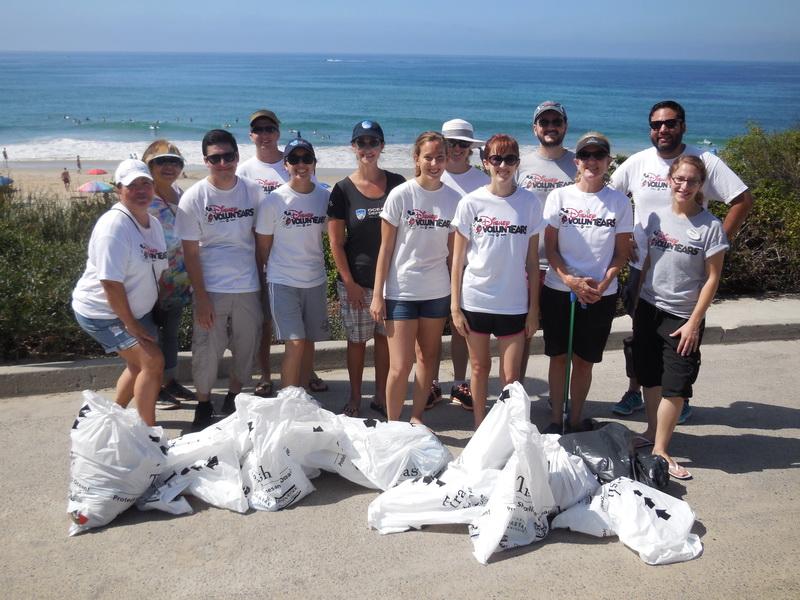 This led to several employees going out with her to cleanup Orange County beaches and wetlands on November 8th, 2014 and then again on September 28th, 2015. See Cheryl pictured above (in the middle in a blue ODA shirt) with the 2015 gang of Disney VoluntEars. Cheryl, your efforts over the years with ODA are very much appreciated! And your husband, Marc, too!

Recently, on August 10th we got help from 12 more Disney employees who pitched in and removed about 100 pounds of plastics (!!!) from a spot along Pacific Coast Highway in Huntington Beach.  The area is mere feet from a marshy area that fish and birds call “home”; we call it Talbert Marsh. 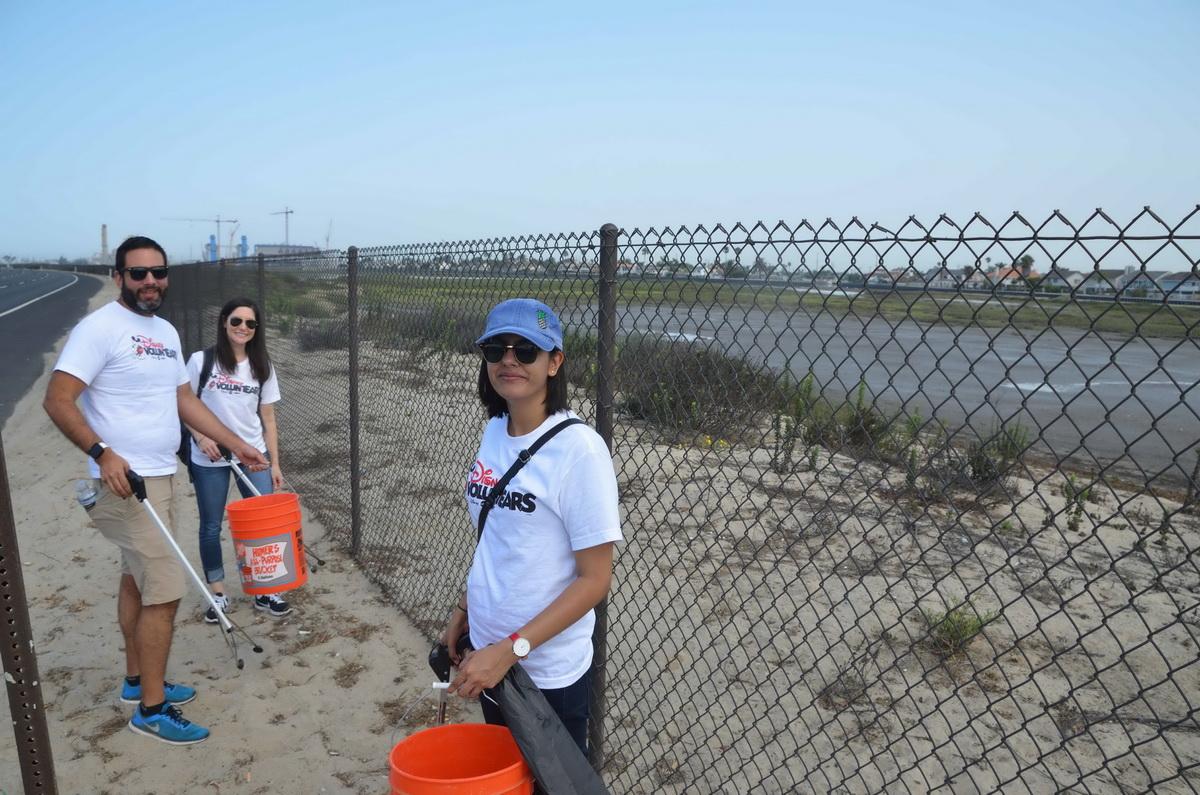 I met up with Michael Austin and the other Disney employees at a parking area near the site at 10am.  I had a chance to talk with them about why it was so important for us to clean up this site, and then handed out buckets, bags and pickers to help them collect all the debris.

Honey, We Shrunk the Debris!

This marsh is a protected area, there is a fence all around it, and people are prohibited from going in there.  This is a welcome respite for the fish and birds.  But unfortunately, the fence doesn’t stop all the plastics from entering those waters.

Right across the street is the Pacific Ocean, with a stretch of sandy beach that thousands of people use every weekend.  And as with any large gathering of people, plastic waste gets left behind with little regard for the damage it can cause.  The city put up the fence for a reason, to keep people out of the marsh, but the fence also manages to snag a lot of the debris before it gets into the waters of the marsh.

However, as you know, plastics are very light in weight and get wind-blown. They can fly over the fence and end up in the marsh anyway.  So, that’s why we decided to remove this stuff, before it gets into the marsh, sinks, and becomes a much larger problem for a variety of marine wildlife who will unfortunately think the plastic items are some kind of food. 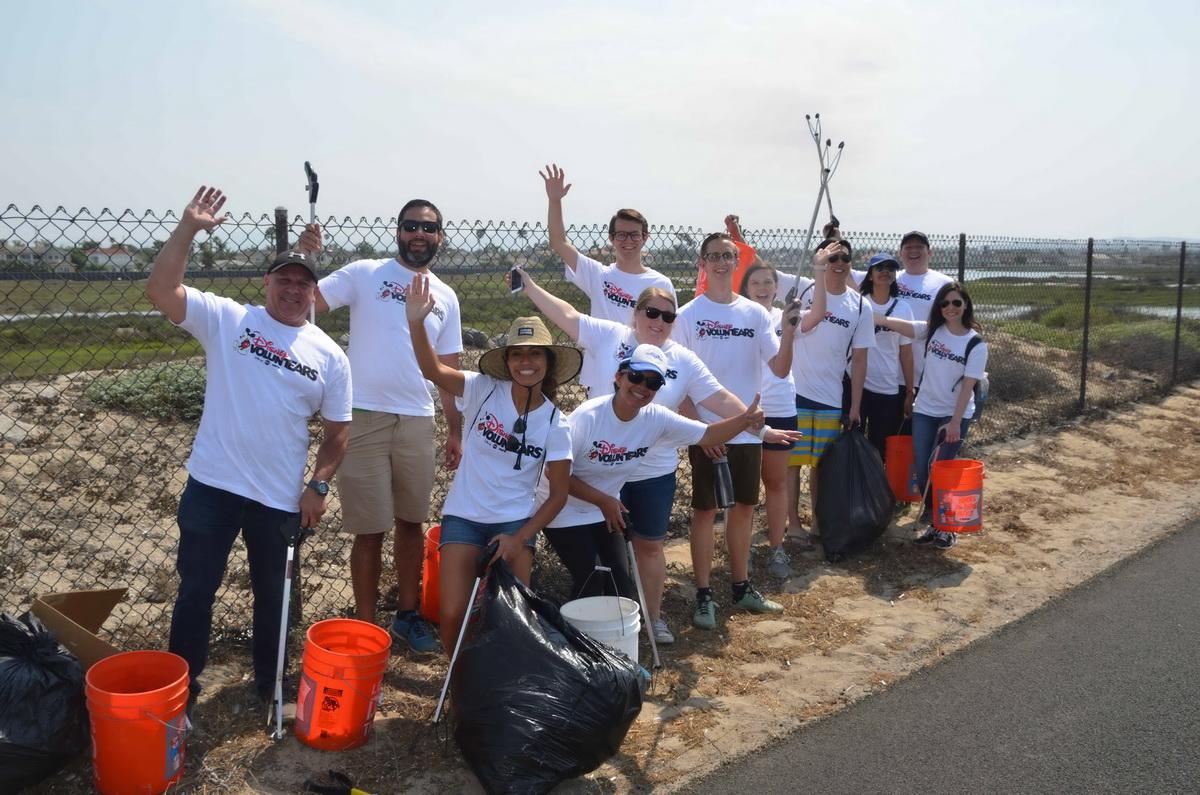 All told, we spent two hours on the site (that’s 24 man-hours!) and removed all the plastics we saw.  We collected a lot of different items: cigarette packages, fast food containers, Styrofoam plates and cups, mylar balloons, kites, plastic bags in all shapes and sizes...This section of PCH is a half mile long, and at least for a day, was debris free.

“Thank you” to Cheryl and Michael for initiating this great haul! And much appreciation goes to each of you Disney VoluntEars for generously giving your time and effort to defend our oceans from hazardous debris!

Next up, the Fullerton Channel

On Saturday, August 11th, another one of our longtime volunteers, Karla Reinhardt, organized yet another cleanup of a site that she has been cleaning for about a year now.  She worked with the city of Fullerton so that ODA could officially adopt this section of the channel to clean on a regular basis.

As you whiz by on Fullerton Avenue, you can see a sign that the city put in place acknowledging ODA’s commitment. Check it out here! 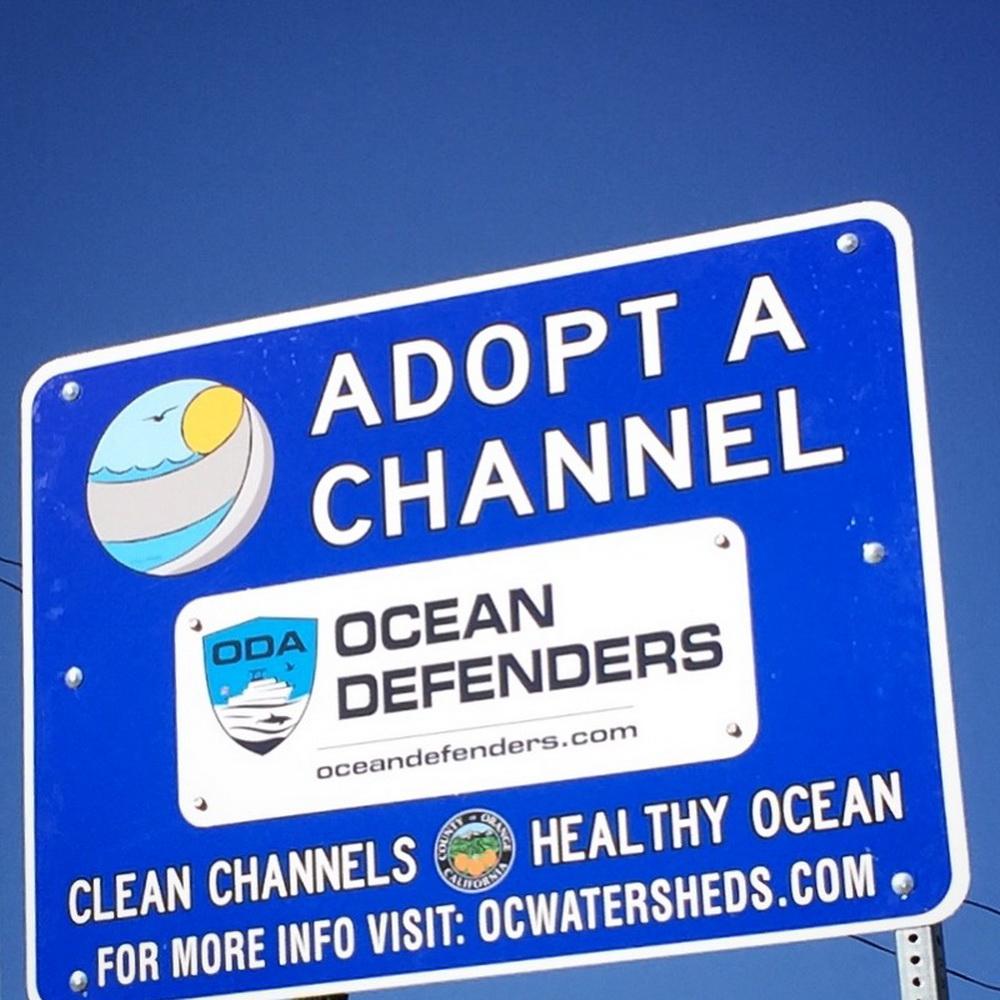 Chasing Trash in the Storm (Channel)

You may be aware that southern California has many concrete storm channels. Maybe you’ve seen a movie scene with a car chase careening down the channel!

Well, that’s not the channels main purpose. They have been put in place to prevent water damage to properties, and, if and when we get rain, these channels quickly divert rain waters to the Pacific Ocean. 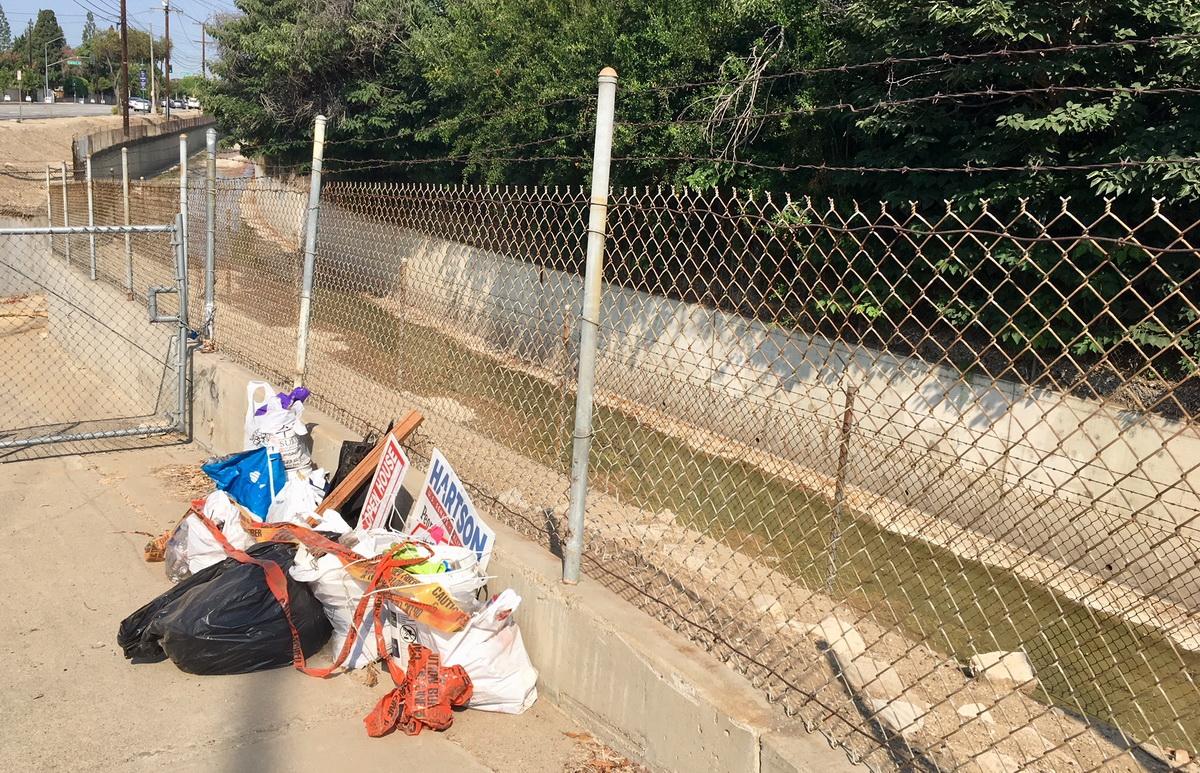 For anyone who has ever taken a look at one of these channels, you’ve no doubt seen huge amounts of waste in them.  Plastics are the number one offender, but people throw all kinds of things in there as well.  Clothes, sleeping bags, batteries, paint cans, tires…  Sometimes homeless people are living in the channels and they leave their own wide variety of garbage behind as well.

So, you can only imagine if the rain comes and there is trash in the channel. Yes, the trash all gets whisked out to the ocean.

So, Karla enlisted some of her friends and neighbors to go out early in the morning to cleanup up this .6 mile stretch of the channel. 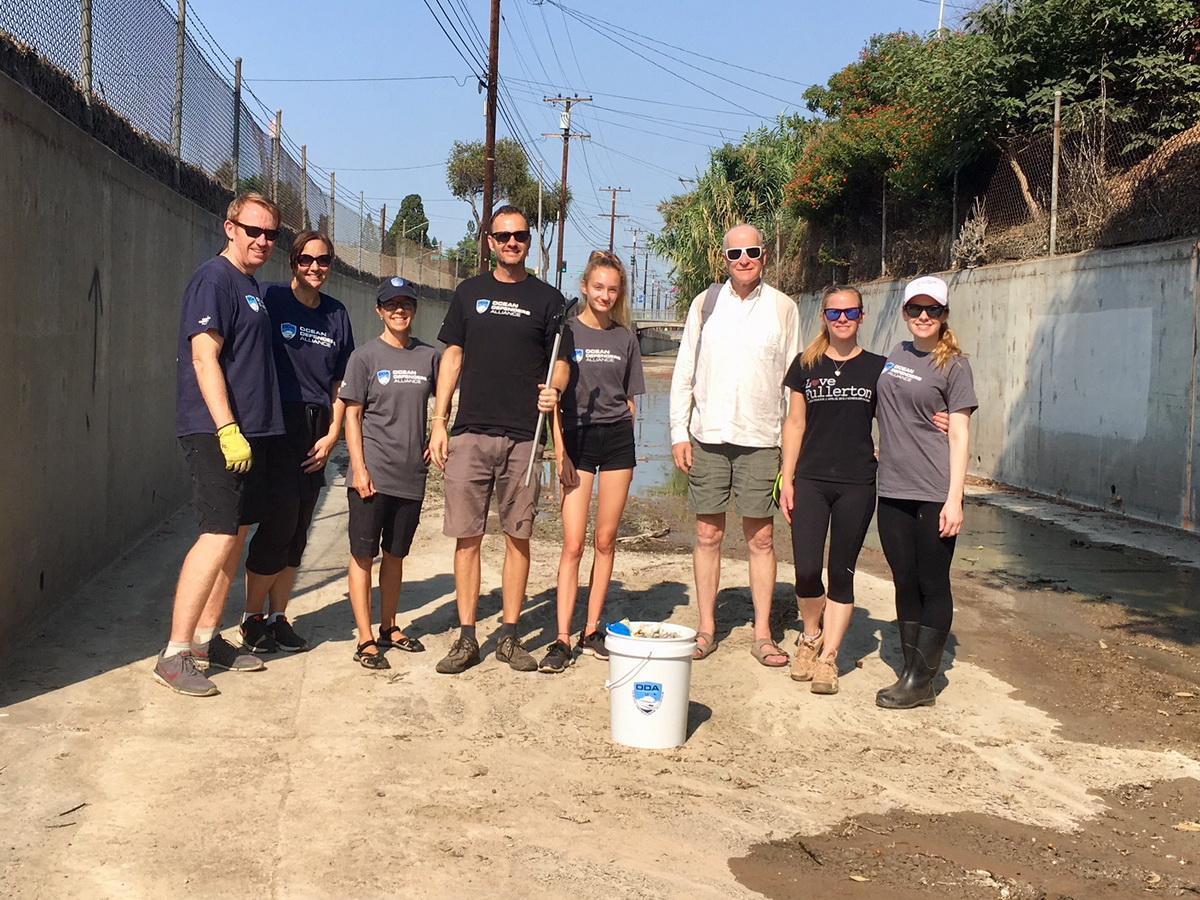 Thank you to each one of you for joining in ODA’s mission and doing your part to make sure this stuff doesn’t end up in the oceans!

I hope these stories inspire you as much as they do me. If you’d like to either join ODA on a beach/channel/harbor cleanup or initiate YOUR OWN cleanup in honor of ODA, please email us at .