On the same day (July 29th) the ODA Hawai’i Crew removed hundreds of pounds of marine debris from coastal waters of Oahu, our California crew took our flagship the LegaSea down to Laguna Beach to remove debris. 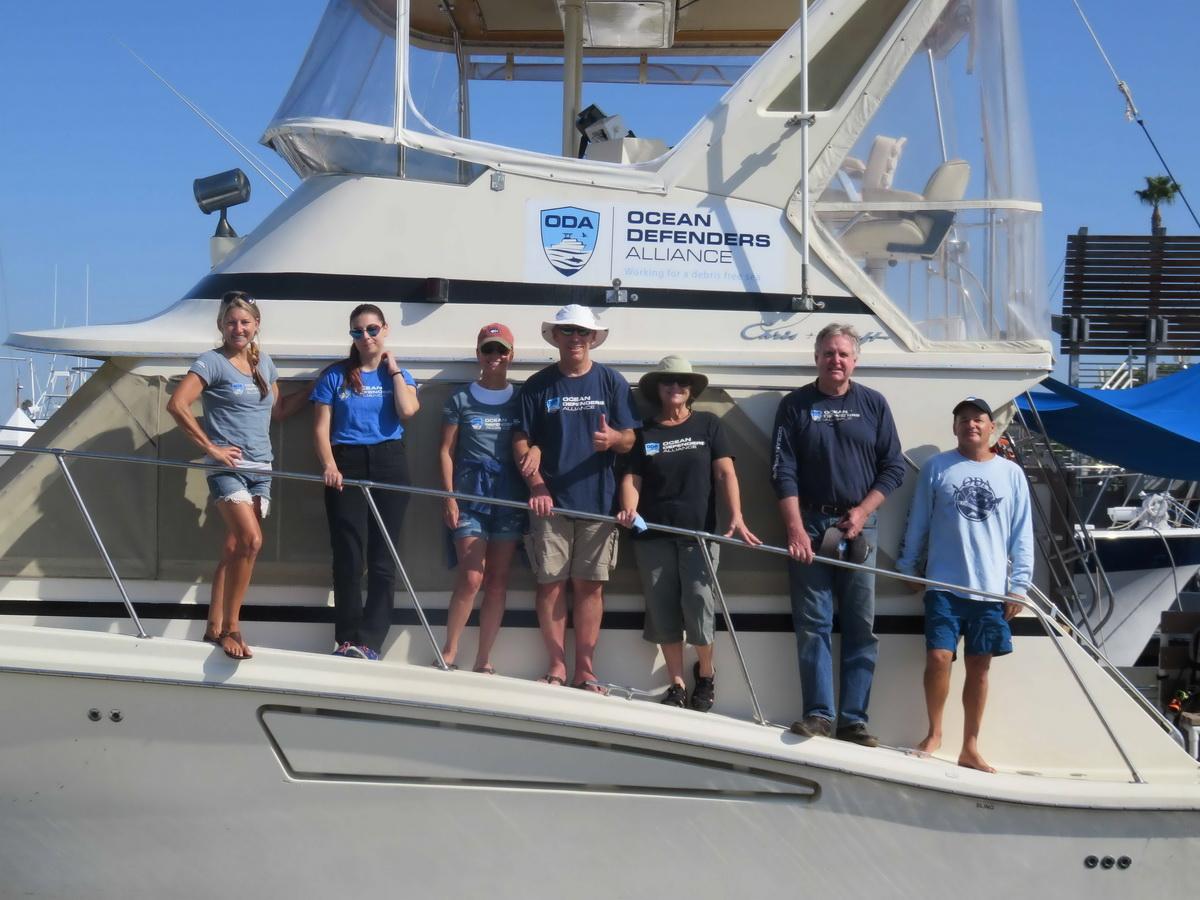 It turned out to be perfect conditions on the water, and it was really helpful because this was a long haul, 32 miles each way…

The first spot they scouted was the northern boundary of the Laguna Beach MPA (Marine Protected Area).  This is a spot known as Abalone Point.  We had documented over 100 traps set there during the height of the commercial lobster season last year and felt there would probably be some abandoned ones left behind. 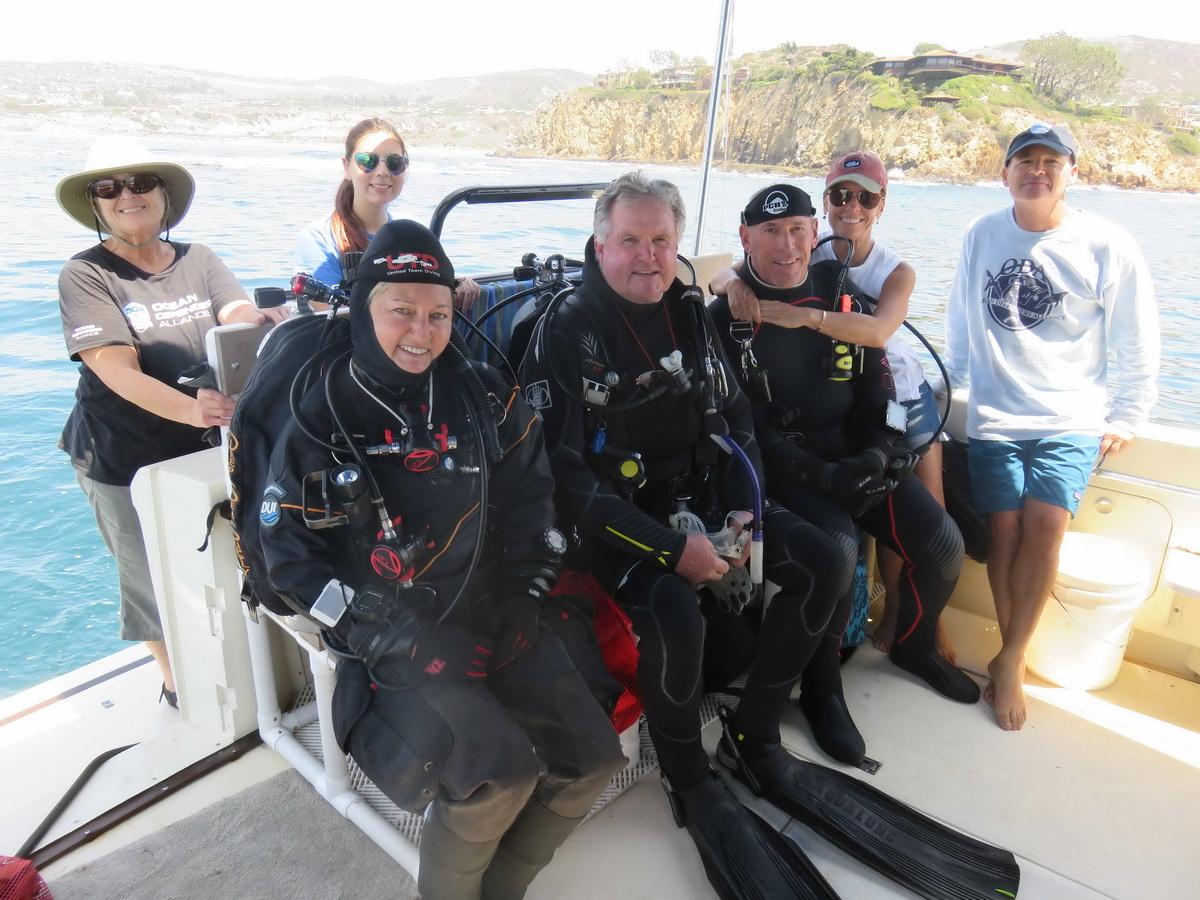 Rex dropped the anchor in 35 feet of water, and SCUBA divers Kim, Al, and Geoff grabbed their scooters and headed along the boundary line.  After 45 minutes they came up with some trap lines and remnants, but there were no intact traps to haul out.

So, they then headed to a spot called Reef Point, about a mile away from the first spot.  This is an extensive reef area that spreads out over several acres.  It’s a beautiful area for scuba diving, as there are countless rocks scattered over the area, with nothing but sand between the rocks’ outcroppings.  Perfect habitat for fish, divers, AND lobsters.

They dropped anchor in 40 feet of water, and soon Kim and Geoff were scooting around the area searching for our prey: abandoned lobster traps.  Al cut his hand on something and had to call it quits for this dive.  Within 10 minutes the first set of lift bags broke the surface.  Five minutes later and 40 feet away from the first bags, two more lift bags were spotted.  Another few minutes and the pattern repeated. 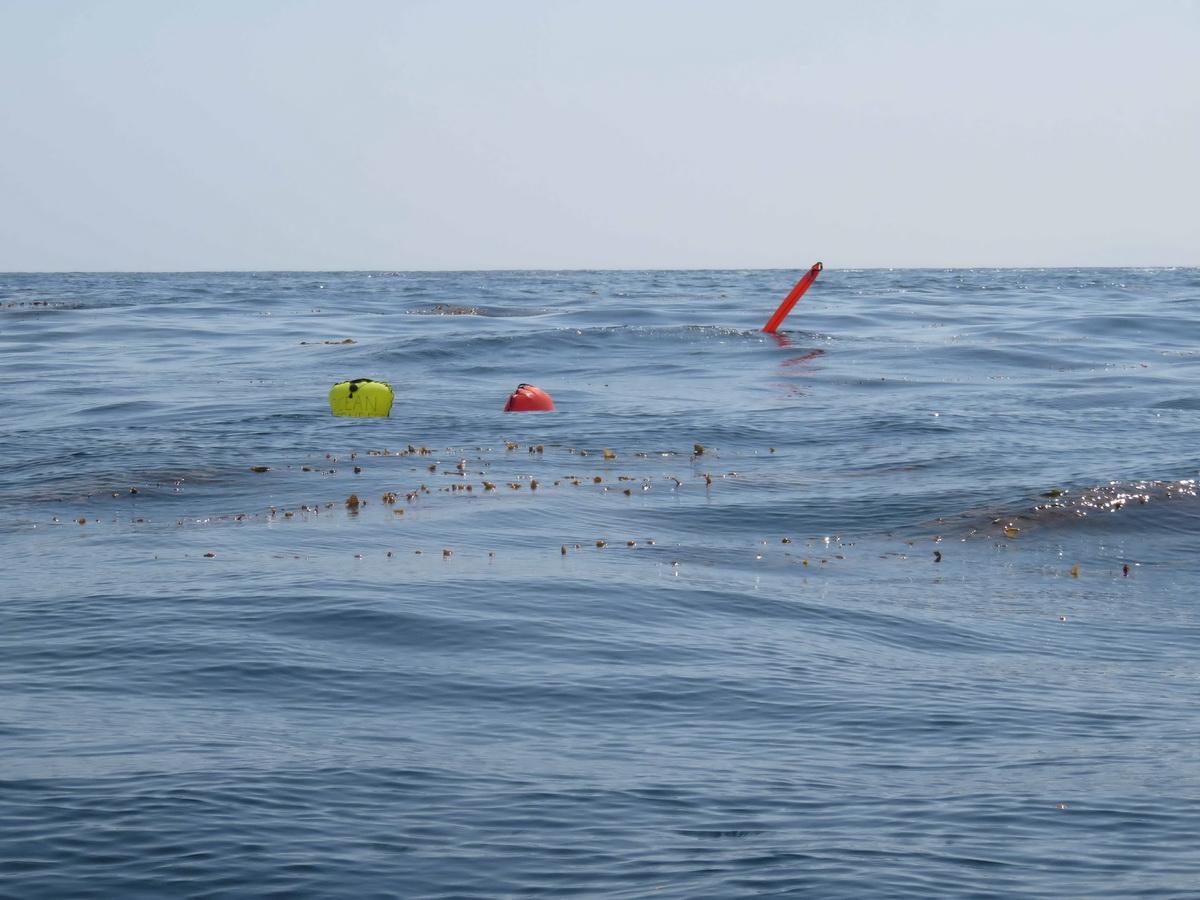 Jim, Brooke, and Susan were in the RIB (rigid inflatable boat) keeping track of the divers and the bags.  They also were actively chasing other boaters away from our divers.  Seems a LOT of people don’t know that a dive flag on a boat means they should keep at least 200 feet away!! 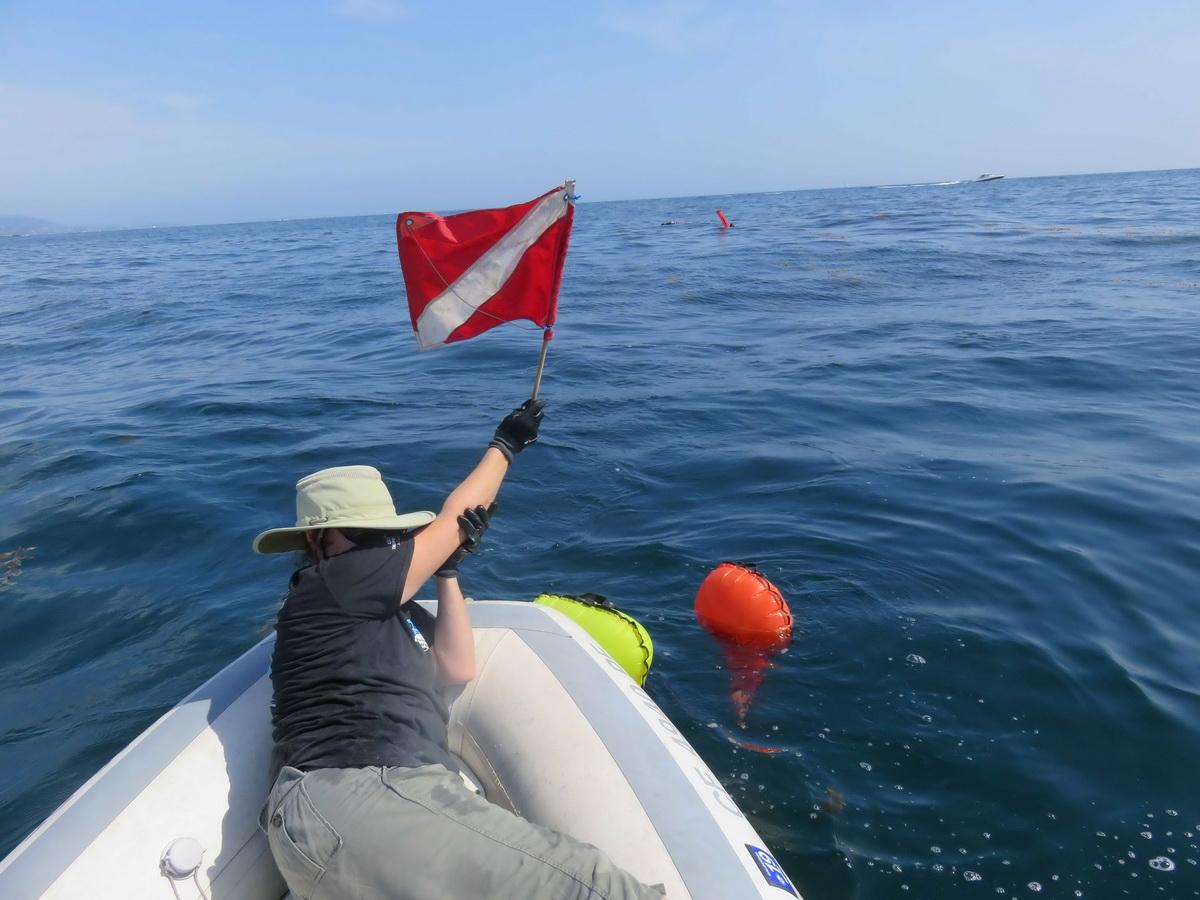 When Kim and Al got safely back onboard the LegaSea, the RIB crew started hauling the traps over to the to the boat where the ODA Boat Crew used our crane (davit) to haul the abandoned fishing gear onto the front deck. 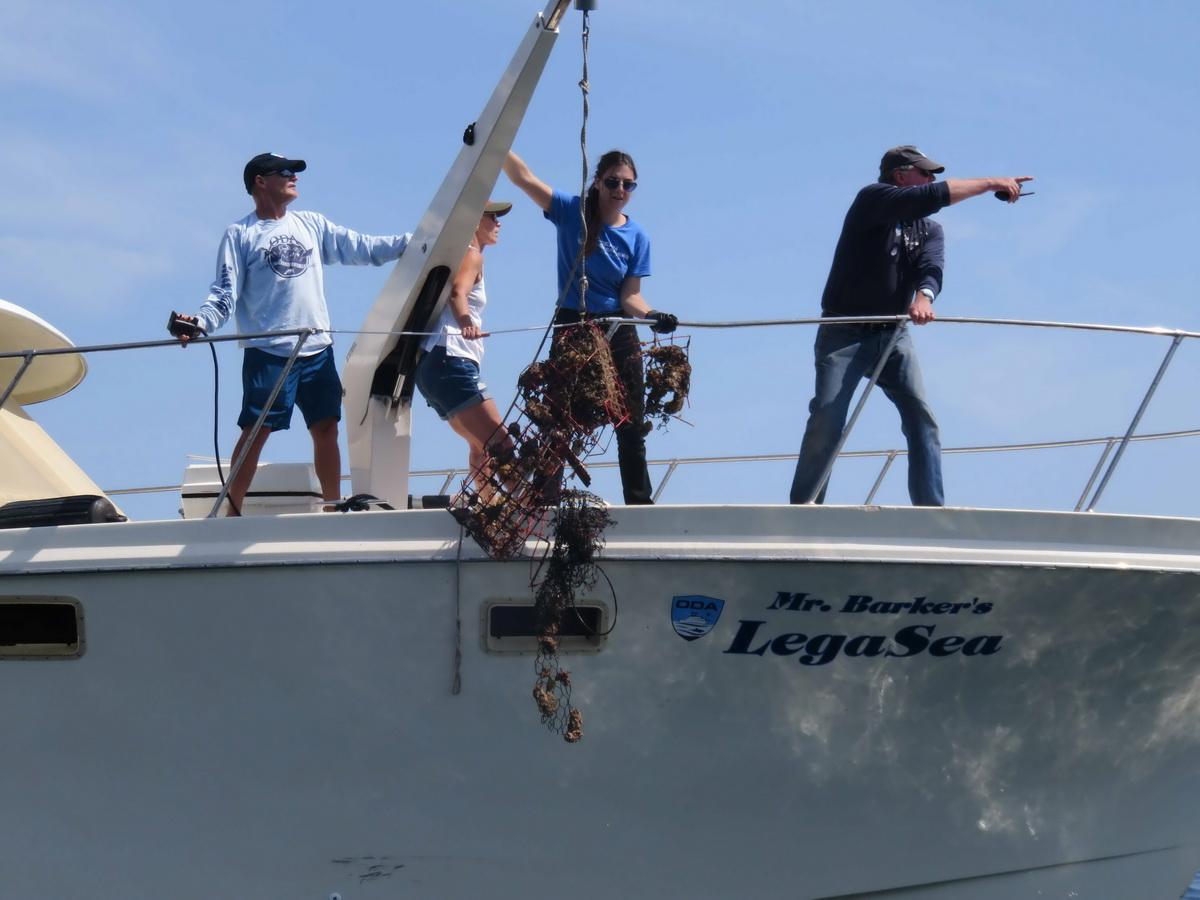 Spirits Soar as Debris is Lifted

As they headed home, the divers reviewed the events of the day. They were very glad to be able to remove traps that would continue to kill marine debris and trap lines that can entangle whales. 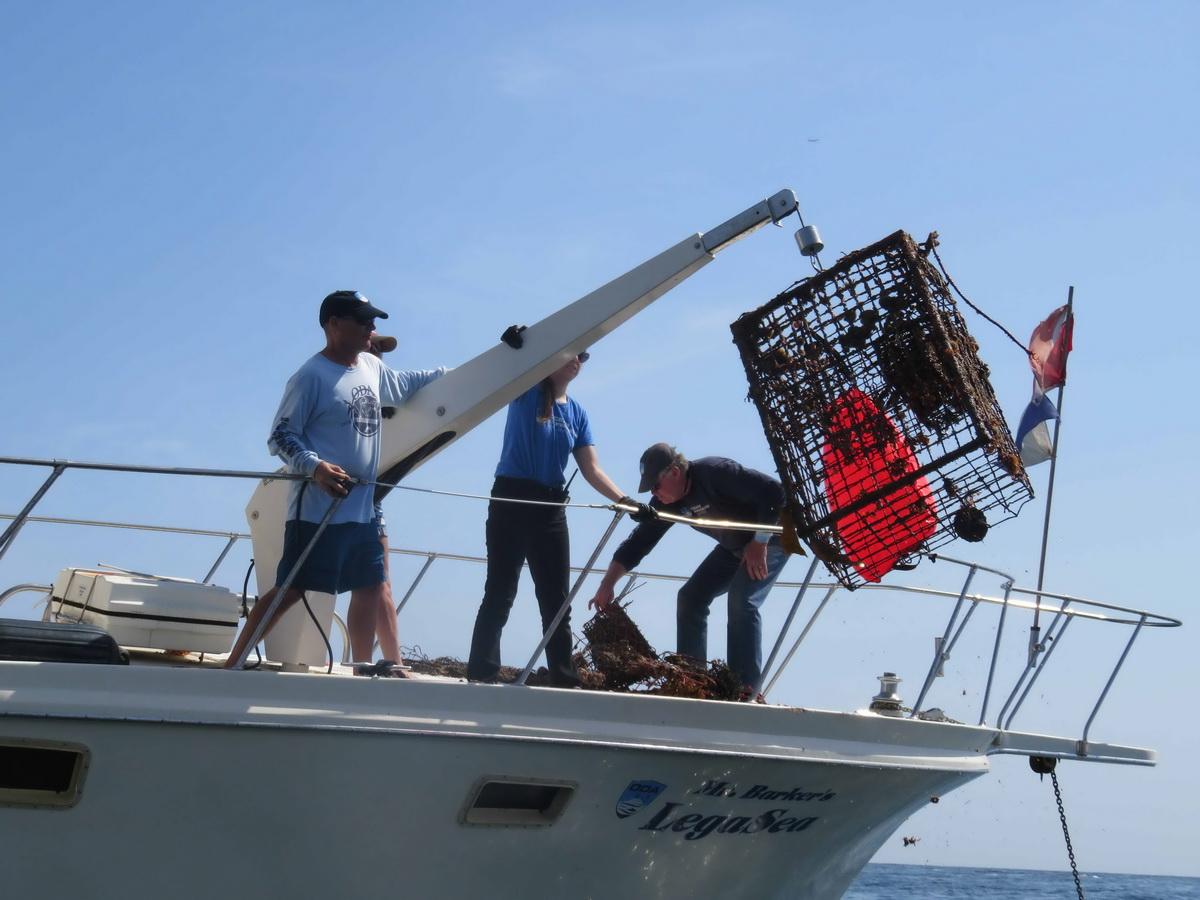 The divers shared about how nice a dive it had been.  They had 20-foot visibility, had seen lots of fish, some lobsters, and three large bat rays.  Nice bonus when you get to see some of the animals that we work so hard to protect from this potentially dangerous marine debris!

In all we removed three lobster traps, 300 feet of trap lines, and a spear that someone lost from their speargun. 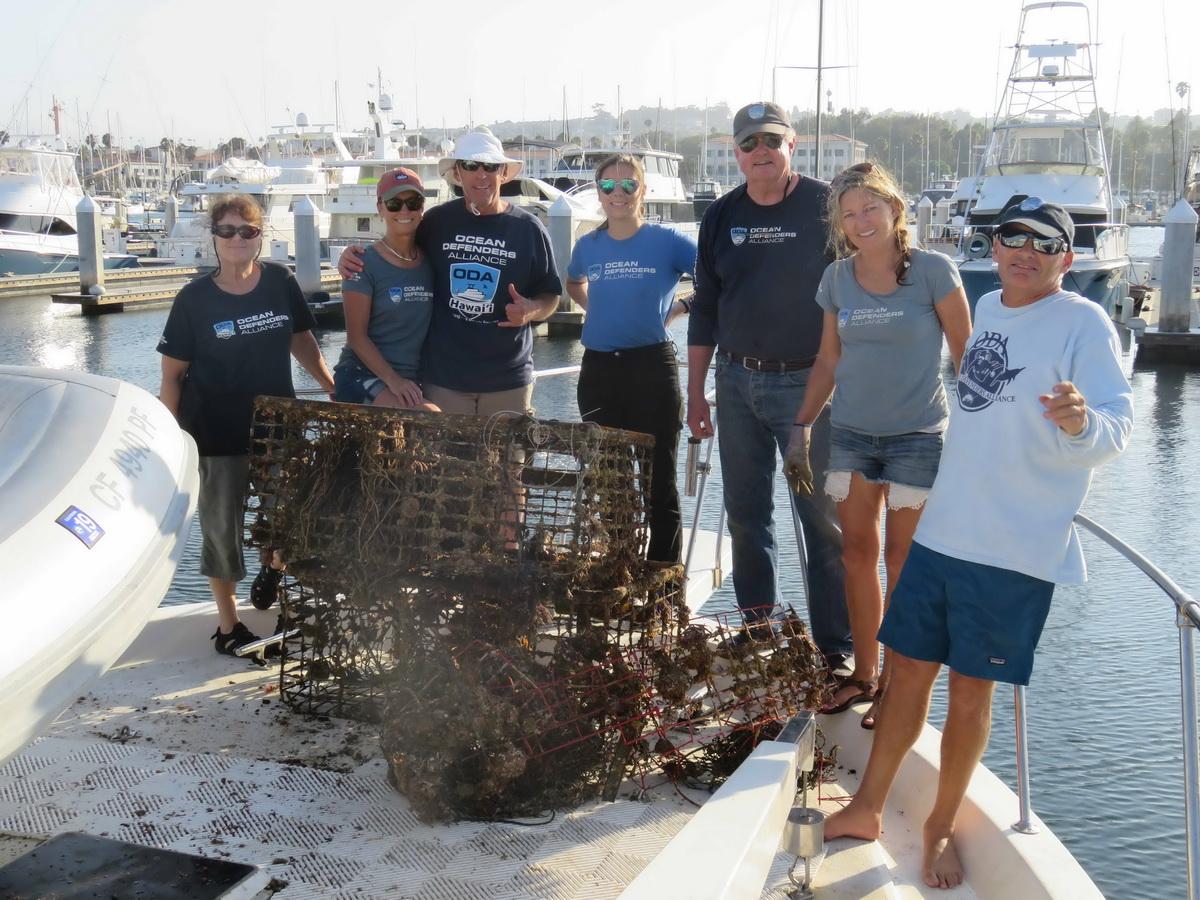 ODA Boat & Dive Crew with "catch of the day".

Excellent job team!  And it was a thrill to know that we had ODA chapters in action on the same day, just 2,000 miles apart.

You can be part of this dual-location cleanup action by donating financially to keep fuel in our tanks! Many tanks for your help! ;-)