As the commercial lobster fishery swings into full gear, a few Ocean Defenders Alliance (ODA) divers took our 50-foot vessel LegaSea out to document the locations of more lobster traps.  Not only do we want to see regulations changed to set the traps farther apart, we also want to know the locations of traps so we can return in the Spring after the legal lobster fishing season is over and remove any that are abandoned.

On Saturday, October 17th, ODA veteran divers Kim Cardenas, Walter Marti, Dave Merrill, Geoff Walsh, and I left our slip in San Pedro at 9am and were thrilled to have flat seas for our long haul down to Laguna Beach.  We had perfect conditions for boating, and we all enjoyed the cool, breezy ride down the coast. 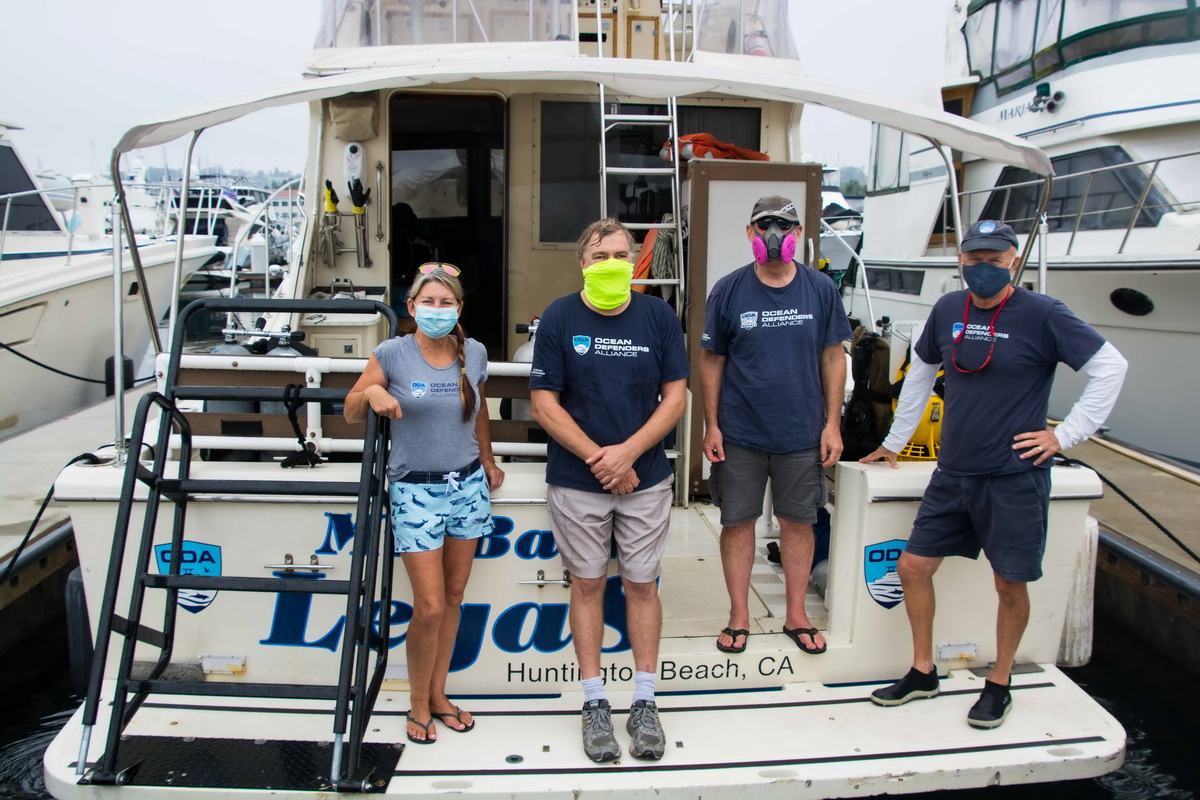 Trap Tracking to Save Whales

Our objective was to get the GPS locations of the lobster traps that abound off the Laguna Beach coast.  Laguna has one of the largest Marine Protected Areas (MPAs) in Southern California.  The entire coast of Laguna is a “no-take” area and is roughly seven miles long.  “No-take” means that no animals can be caught for any reason in this area. People are allowed to go into these areas for snorkeling, surfing, scuba diving, boating, and swimming.  You just can’t take any of the marine life. 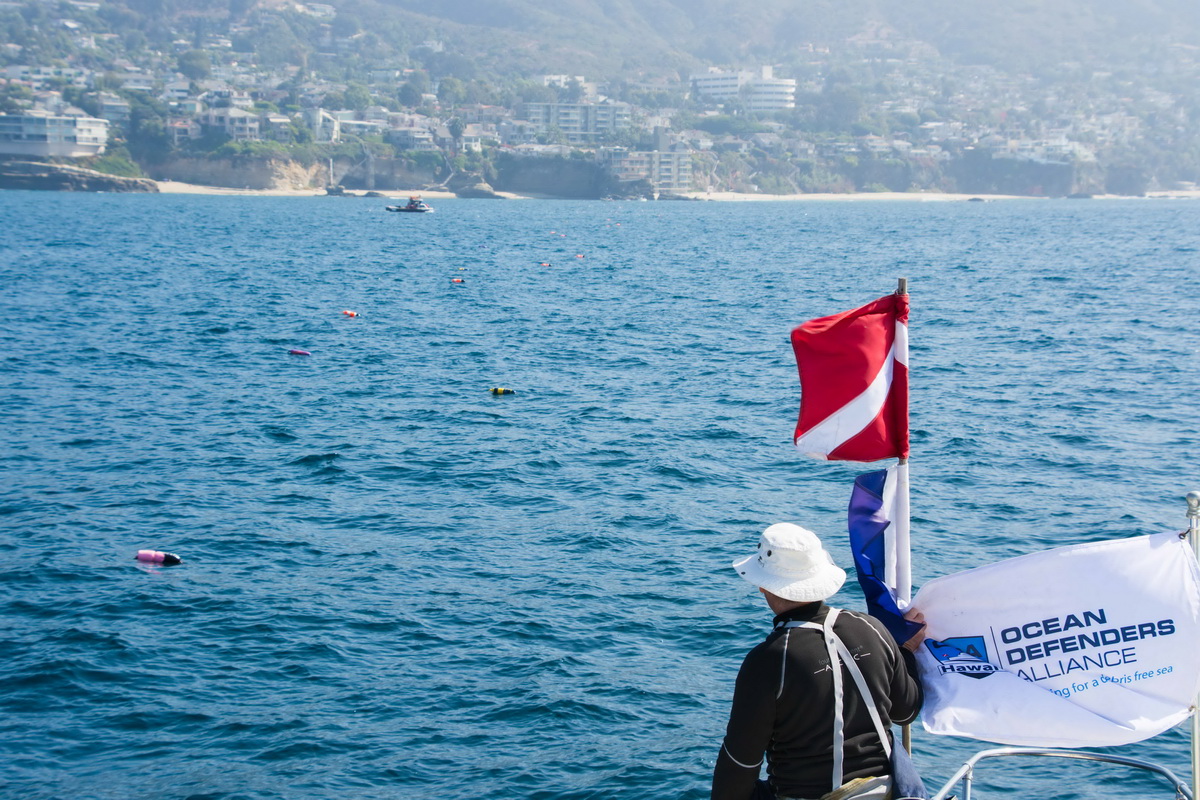 Because of this stringent protection, wildlife thrives here.  Lobsters can be found in abundance and the fishermen know it.  Therefore, the fishermen set their traps just outside the MPA boundary, legally, knowing that the lobsters go in and out of the park each day in their search for food and adventure.  The lobster fishing season started on October 7th this year.

ODA started documenting the traps that are set here because we’re very concerned about the potential for whale entanglements by the hundreds of lines that float up from these traps.  Each trap has line that’s connected from the trap to a marker floating surface called a “buoy”.  Please take a moment to imagine what that would look like underwater: hundreds of traps sitting on the ocean floor spaced 10 to 40 feet apart, each one with a vertical line “hanging” vertically in the water.

Traps from Shore to Horizon

We headed all the way down to the south end of Laguna for our first efforts.  When we got there, we saw what looked like over 100 traps going straight out from shore to the horizon.  We began logging the location of the traps about 100 yards from shore, and just as we started, we looked out to the horizon along the line of traps we were going to record and we literally couldn’t see the end of the trap sets! 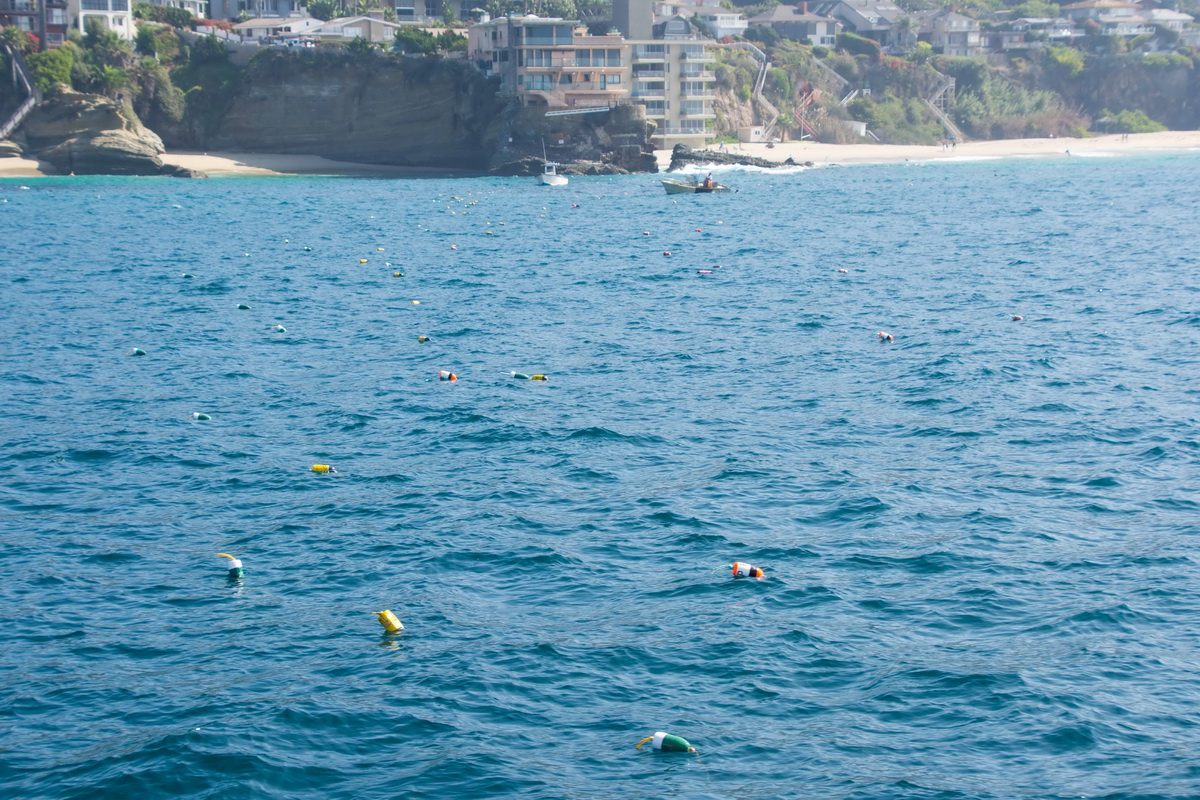 As we motored our way out, we had to keep far enough away to make sure we didn’t catch one of the trap lines on our propellers.  When we got to the last trap, we had documented 165 along that south end of the MPA.

After that, we headed back towards shore and dropped anchor about 200 yards from the shore.  It was 45 feet deep there.

Kim, Walter, and Geoff soon had their dive gear on and swam over to some traps where they dropped down.  Their goal was to get some underwater (UW) footage of what it looks like down there.  Walter, as always, was our man with the cam! 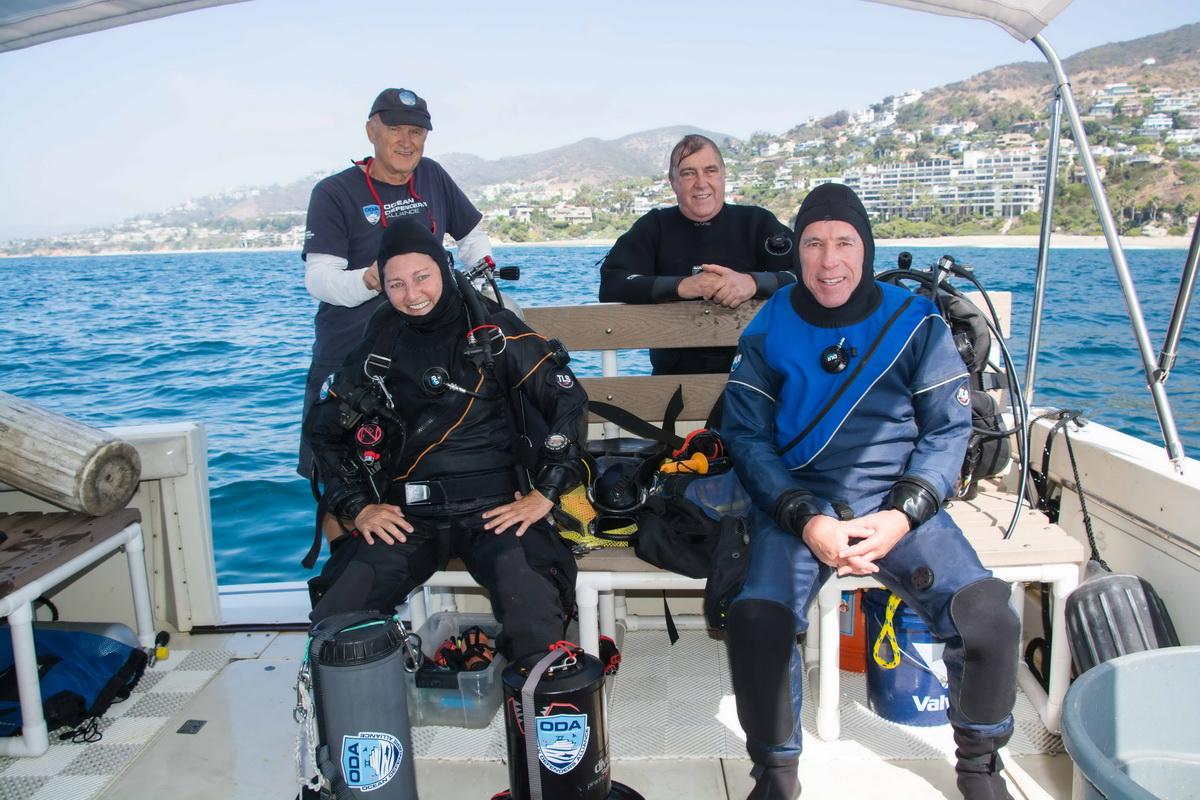 Within 20 minutes Kim came back to the boat…  Uh oh, what happened?  Turns out the UW visibility was so bad that she got separated from Walter and Geoff.  Shoot.

About 15 minutes later Walter and Geoff surfaced and swam back to the boat.  Unfortunately, Walter wasn’t able to get the clear footage we were hoping for, but he did get a few decent still images. In fact, this one is tough to look at, but this is the reality of what these traps do: 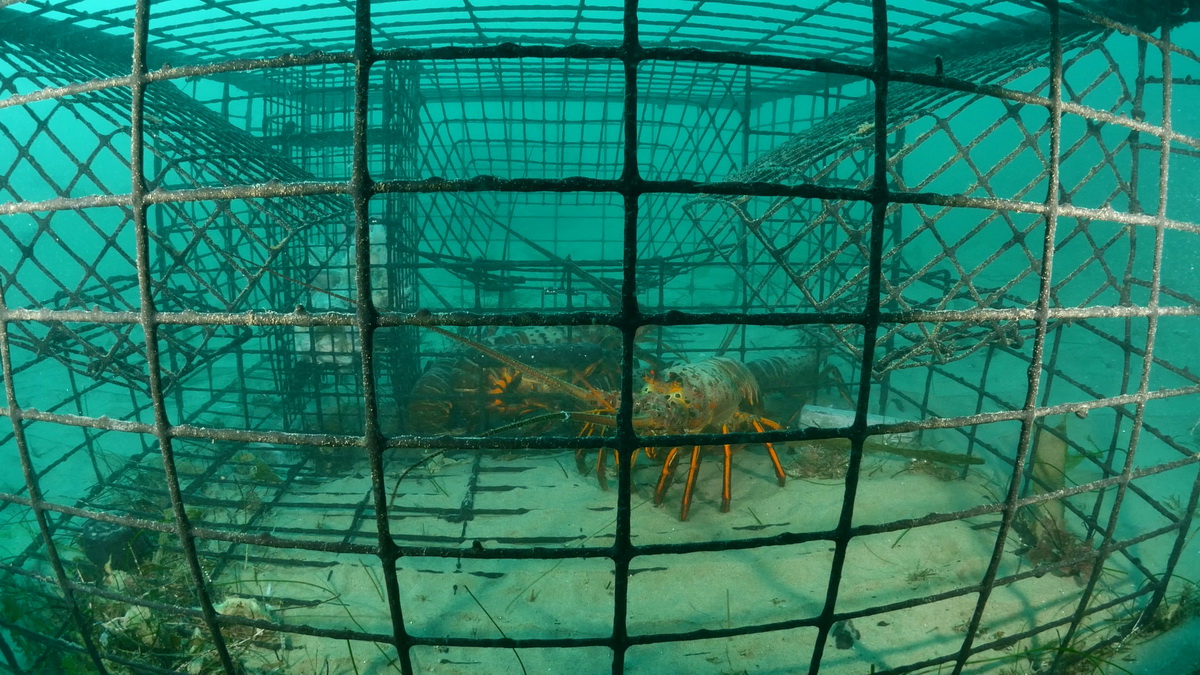 We’ll go back on another day to get video; it's so important to build our case.

After everyone was back aboard, we headed to the north end of the MPA to see what we could find there.  Sure enough more traps set in an almost straight line from shore, heading out to sea…as far as the eye could see. 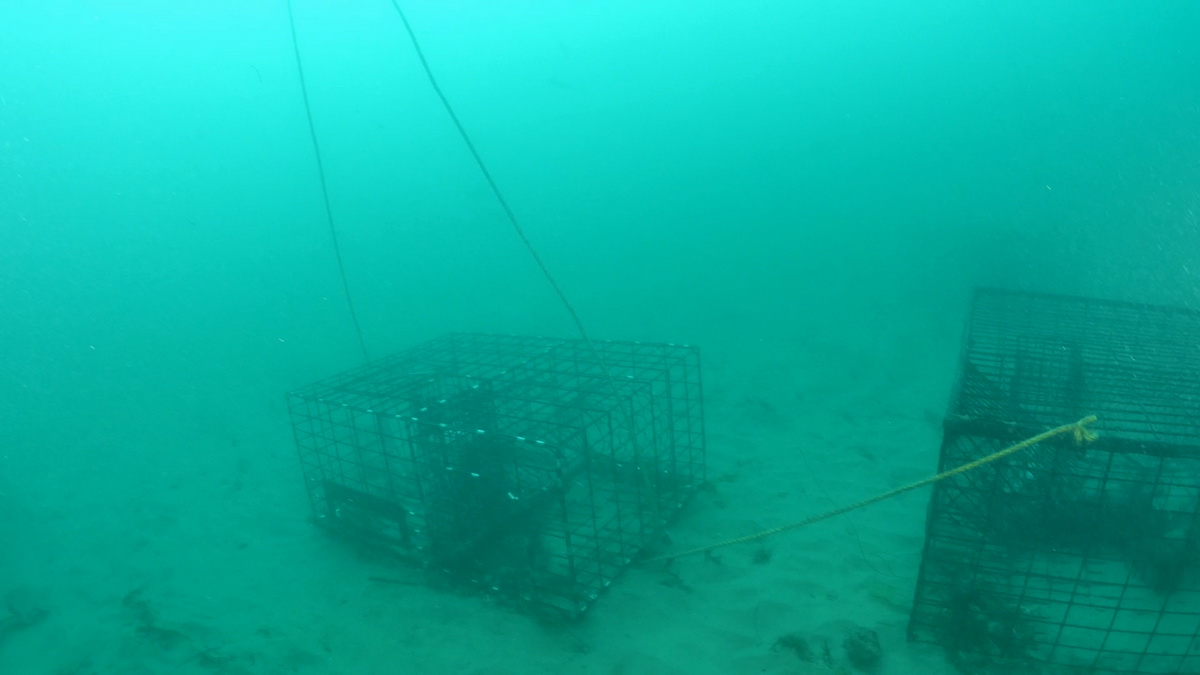 We repeated the same routine, starting as close to shore as we could and headed along the line, getting the GPS coordinates for all the traps.  We documented 142, but there were another 70 that we didn’t get the numbers for because they were too close to shore for us to get close to safely.

We had planned on the divers going down again here, but there was just too much boat traffic for us to feel the divers would be safe.

So, we called it a day and headed back to San Pedro.  Along the way we documented another cluster of traps around Corona del Mar and Newport Beach. 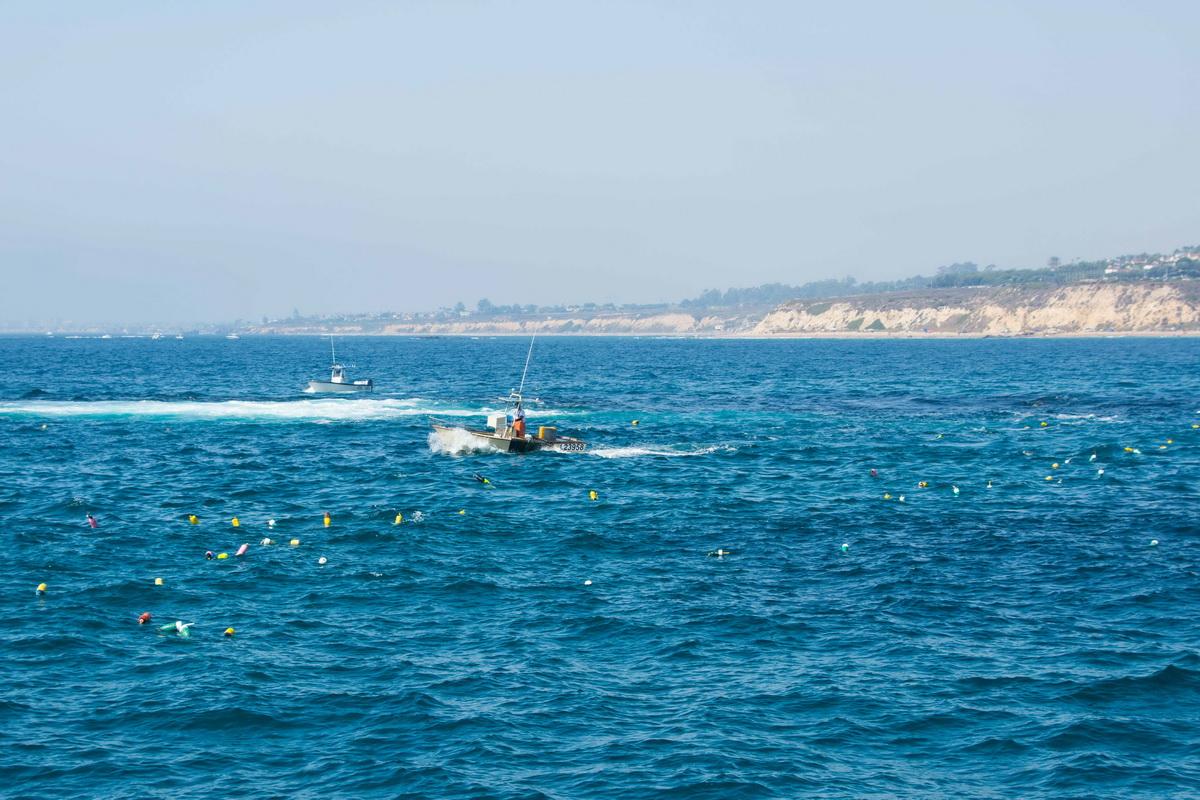 In all we got the GPS numbers for 427 traps and observed 100 more along the north and south end of Laguna.

It was another great day on the water working to save whales. The boat ran perfect and you would be hard-pressed to find nicer people to spend the day with.  Kim, Walter, Dave, and Geoff: YOU GUYS ROCK IT!

Learn more about our Trap Trackers program in this article.