After getting our dive ladder repaired, we jumped right back in with a boat full of enthusiastic divers and deck crew.

We made a short journey on Sunday, July 15th to look for abandoned traps and other marine debris along the breakwall that protects the Los Angeles Harbor.  We’ve been removing ghost gear and man-made pollution from this area for over a decade now, and rarely do we not find anything to haul out.  This time was no different. 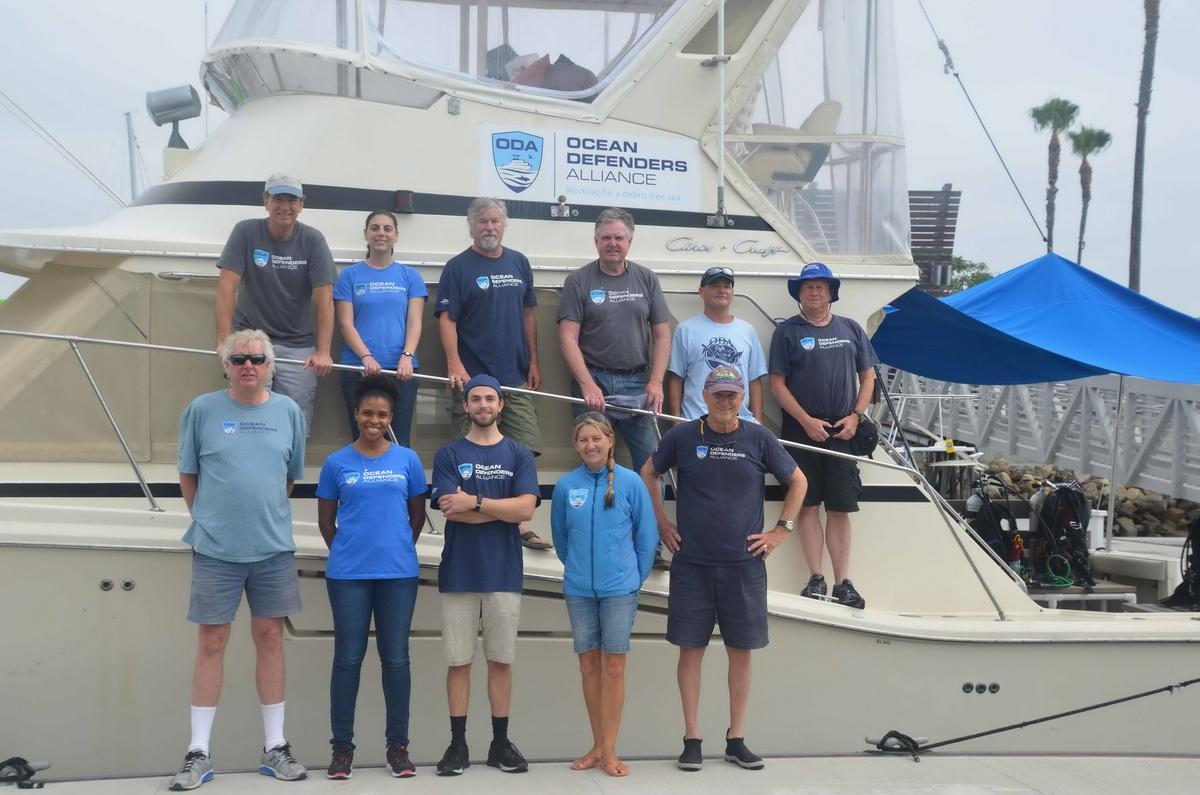 This time out we had Kim Cardenas, Dan Eisenbeisz, Al Laubenstein, Bill Maley and Dave Merrill as our volunteer divers.  Rex Levi was the boat captain.  Shani Tennison assisted the divers and served as our Dive Master.  Karla Reinhardt took all of the great photos you see on this page; be sure to check out ALL of them in the photo gallery below.  And then on crew we also had Jeff Connor, Brooke LaDouceur, Jimmy, and myself as deck support. 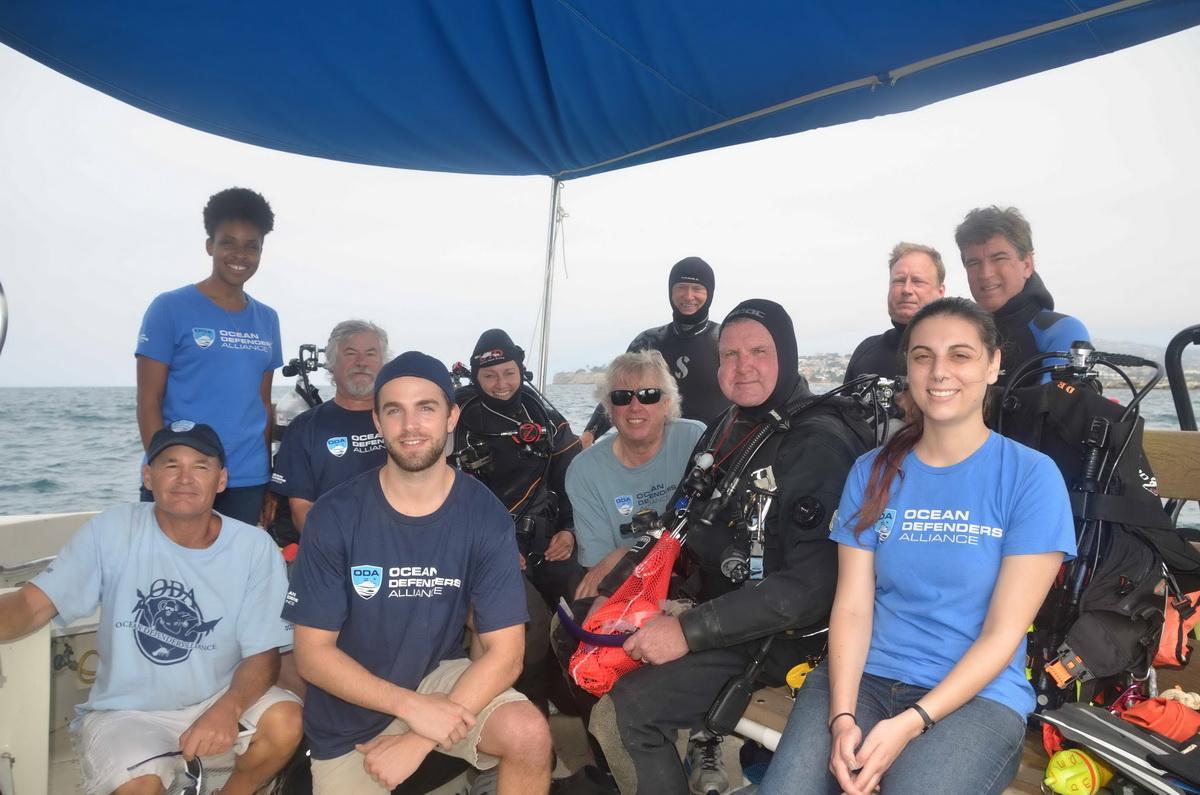 Before we left our slip, we put the RIB (rigid inflatable boat) in the water and towed it behind us.  Even though this smallboat of ours is reaching the end of its serviceable life, we count on it to perform many functions.  When the RIB crew boards the smallboat, they safely maneuver the boat to where we see the divers are working, then when lift bags appear at the surface they retrieve the brightly colored bags so they can tow the debris (which is attached to the lift bag by a line) over to the LegaSea.  Another task for the RIB crew: When boaters get too near where the divers are, the RIB crew runs interference to keep the offending boats clear of the area. 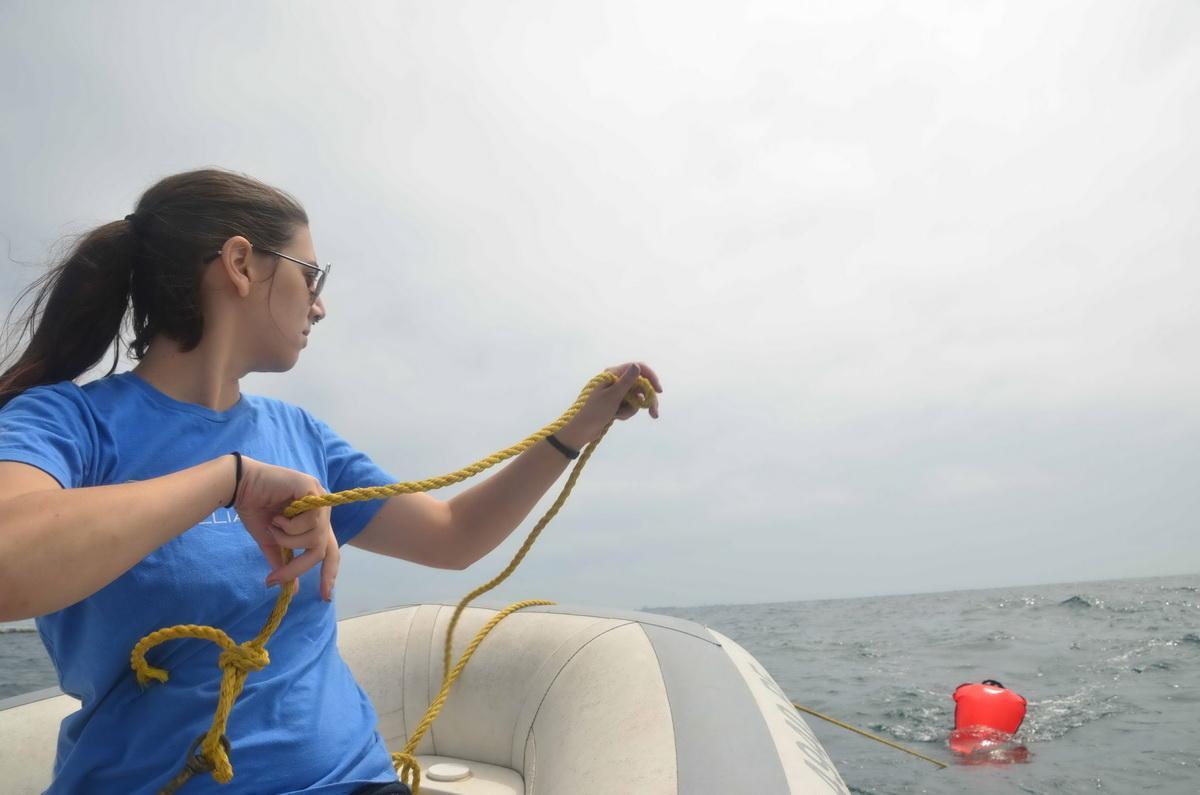 The area we were working on this particular outing is just outside the entrance to the harbor and gets a lot of boats traversing on their way out to the ocean.  Even though we have dive flags up on the bow for other boaters to see, it’s been obvious at times that some people are oblivious to what those flags mean.  When a boat displays a dive flag (a red flag with a white diagonal line), boaters are supposed to stay at least 200 feet away to ensure diver safety. 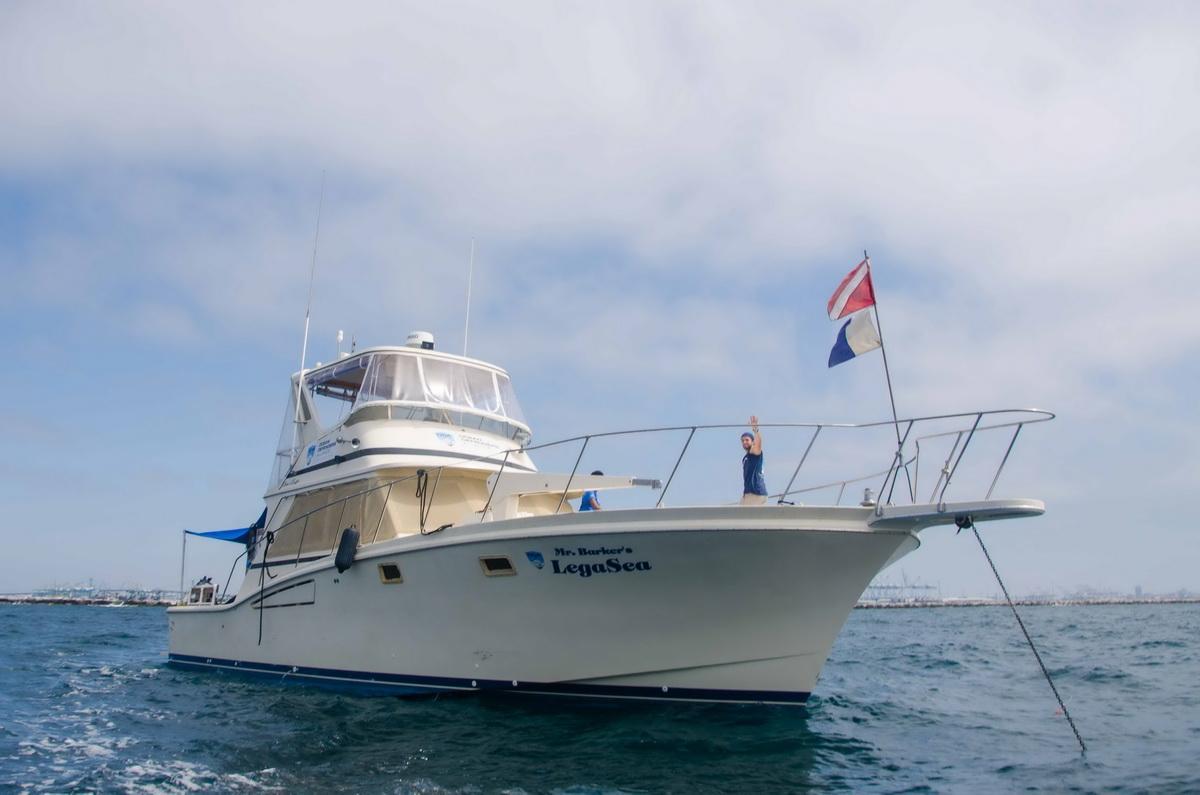 See the red dive flag on the front (bow) of the boat.

Unfortunately, a lot of boat captains don’t heed the warning and we have had many instances when we have to start yelling at them, activating the horn, and jump up and down to get their attention to steer clear.  The RIB is the final safety measure we deploy to alert them that we have divers in the water.  If the offenders continue along their path, the RIB crew will safely position themselves right in front of the approaching vessel to get them to change course.

On this day, when Jeff and Brooke were operating the RIB, they had to run in front of several boats, to keep them away.

The RIB pictured here is really old and the engine “is on its last legs.”  We hope you will consider making a donation to help us purchase a new one so we can continue removing hazardous debris and making the oceans safer for marine life. We thank you! 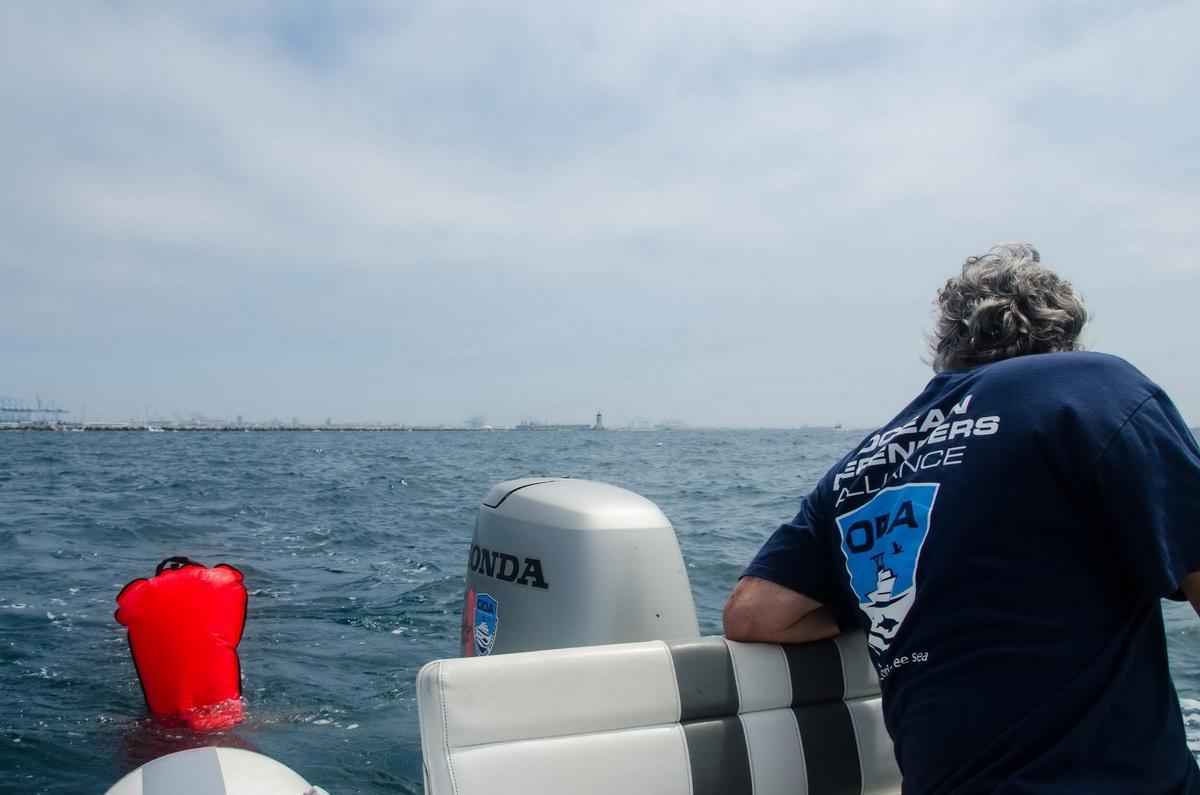 Back to the Task at Hand…

We had five divers ready for action, but we only have three scooters (these motorized handheld units help move the divers forward underwater).  So, they broke in to two teams.  Al, Dave, and Kim took off using the scooters, while Bill and Dan used their leg muscles to propel themselves for the entire dive. 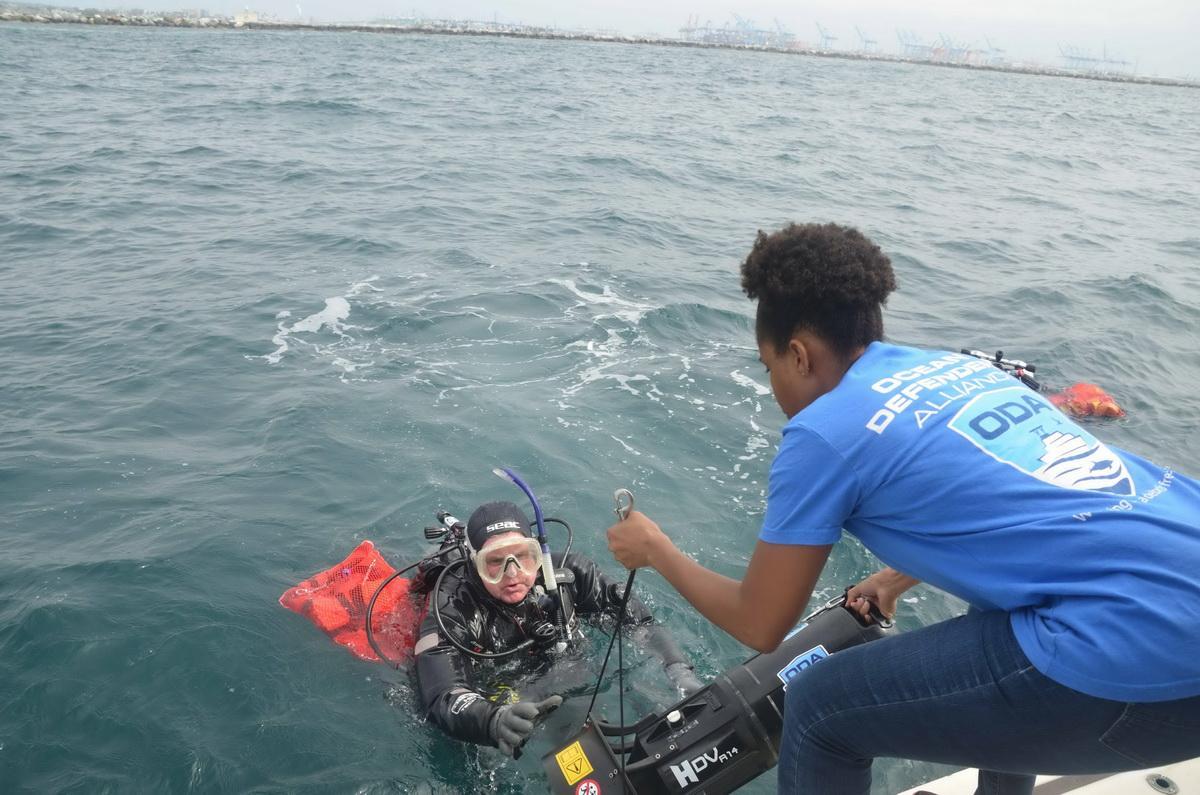 We dropped anchor near an artificial reef, and knowing that traps get set there every year, I thought this would be a good site to search for debris.  They all dropped down in to 60 feet of water and each team headed in opposite directions to maximize the area they could cover.  After 40 minutes, we saw two lift bags break the surface about 300 feet away from the LegaSea.  Sweet!

We soon had all the divers back onboard, pulled up the anchor and went looking for another spot to do our second dive.

Our Dolphin Friends Join Us

Just as we were pulling up the anchor, a group of about 30 common dolphins cruised right by us, some coming within 10 feet of the boat.  Wow!

As soon as we got the anchor in place, Rex started following the dolphins at a safe distance.  But of course, the dolphins couldn’t resist the temptation to do some bow riding. 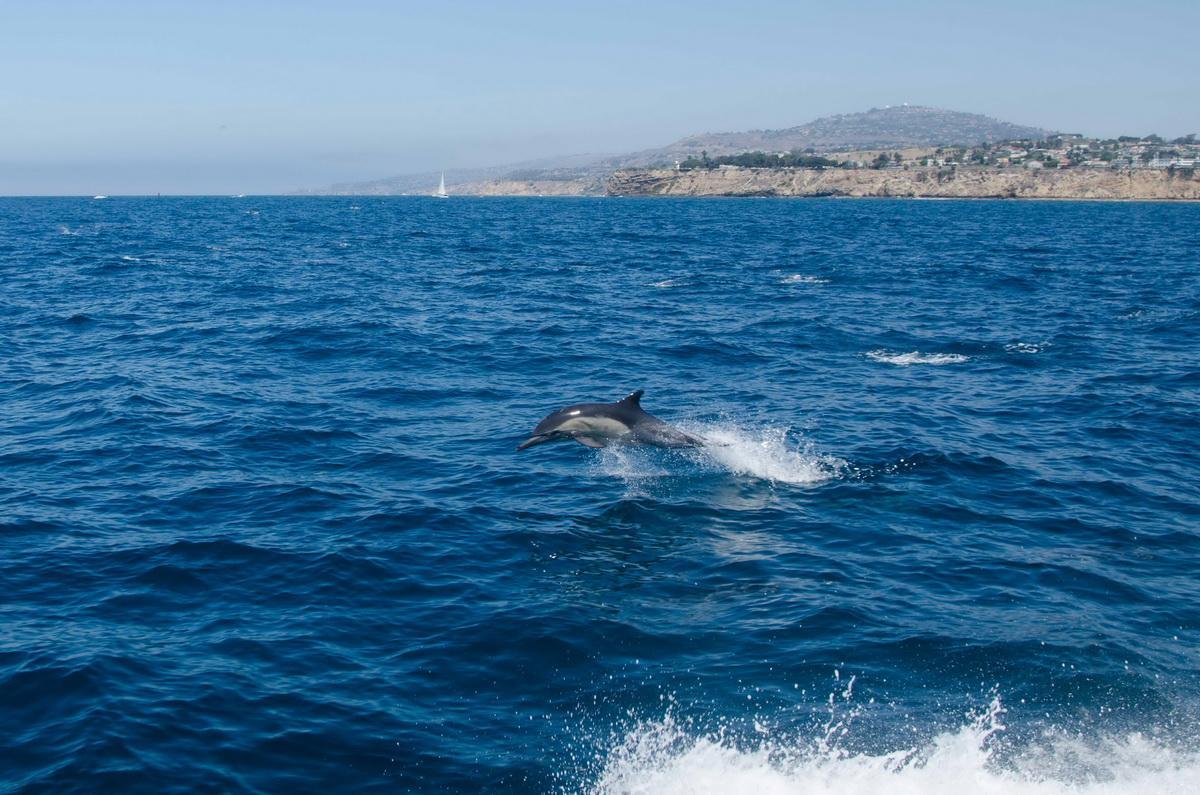 And that they did for about 10 minutes.  Karla got some GREAT shots of the pod, which I estimated at over 200 individuals.  There were dozens of babies swimming with the pod, with some no longer than three feet.

When we dropped anchor at the next site, we decided to position the boat as close to the breakwall as we could.  This allowed the divers to inspect the wall itself to see if any debris was stuck on or near the rocks.

For the second dive, Dan had to take a break.  So, Bill took off west on his own, and the scooter team headed east.  RIB crew Jeff and Brooke followed Bill’s bubbles and tracked him well over 400 feet from the LegaSea.  Hey Bill, how does an old guy kick that far?!?! ;-)

At about the 40-minute mark, we had lift bags from both teams bobbing at the surface.  The RIB team did their job, attaching a tow line to each group of debris and hauled it over to us on the LegaSea. 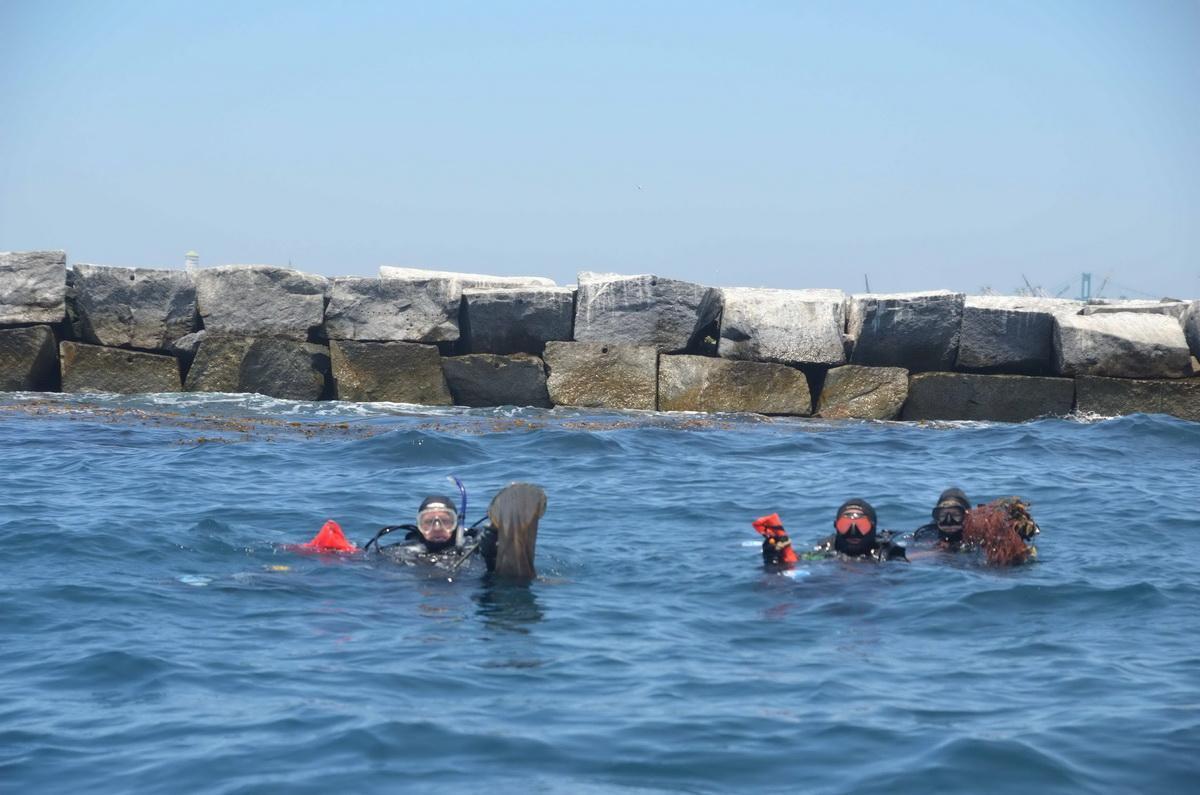 As the divers were getting out of their gear, they started talking about how nice of a dive it was.  Visibility was really nice at 20-25 feet, and the breakwall is actually a nice habitat for a lot of critters.  They saw several octopus, lots of sheephead fish (some really large males), lobsters, and lots and lots of small fish.  The small fish were just what the dolphins were after, with seabirds such as pelicans, cormorants, and terns joining the feast as well. 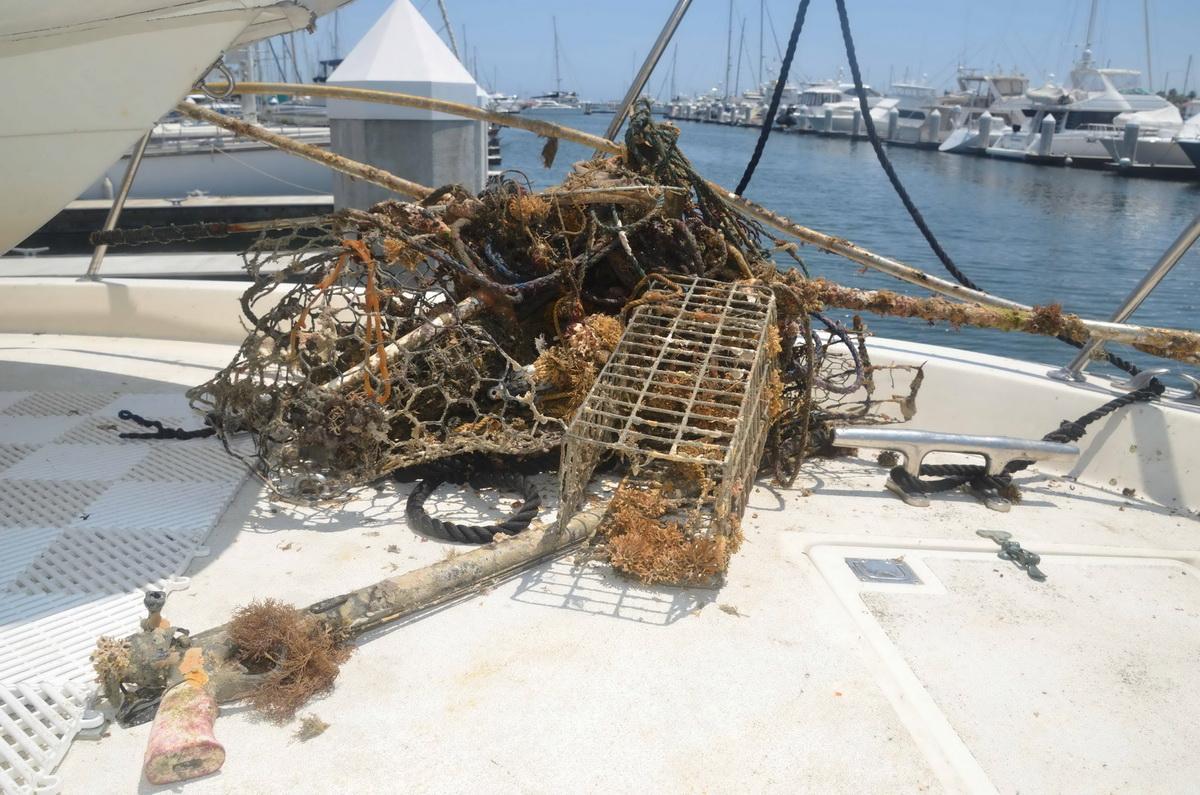 The debris we removed might not seem like a lot, but if left down there it would cause havoc with the habitat that supports all the life forms that call this area home.  Even though we didn’t find a whole lot of debris, it is a good sign that we are keeping even highly-fished areas relatively cleaned of man-made debris.  We did remove lots of trap remnants, 300 feet of trap lines, some bow rails from a wreck, and a spear gun.You know what I want to do with a spear gun, right?! Well, Shanti ended up taking care of it. Thank you, Shanti! 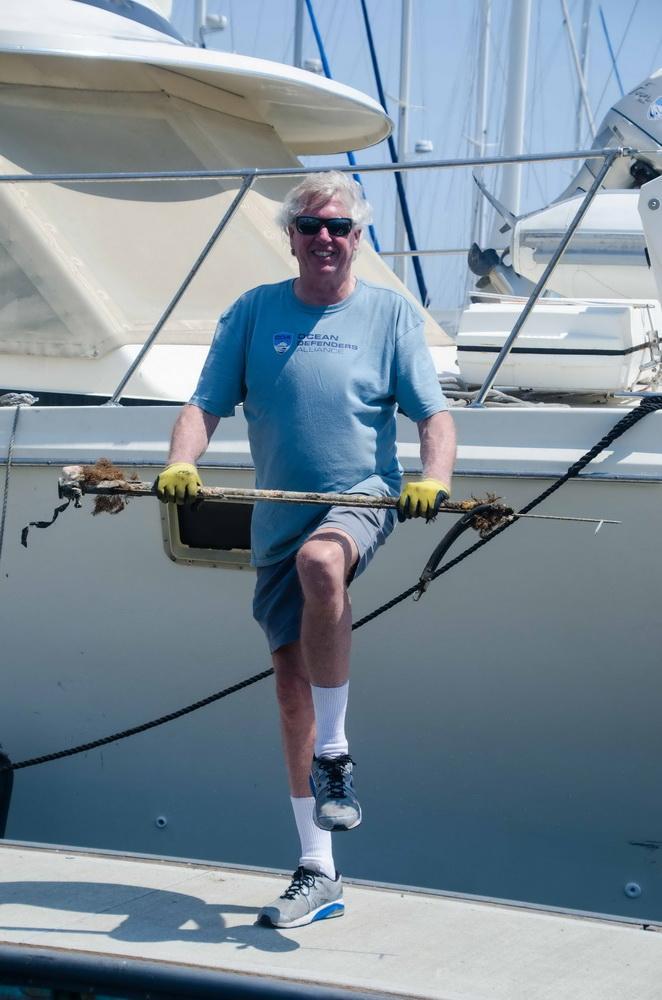 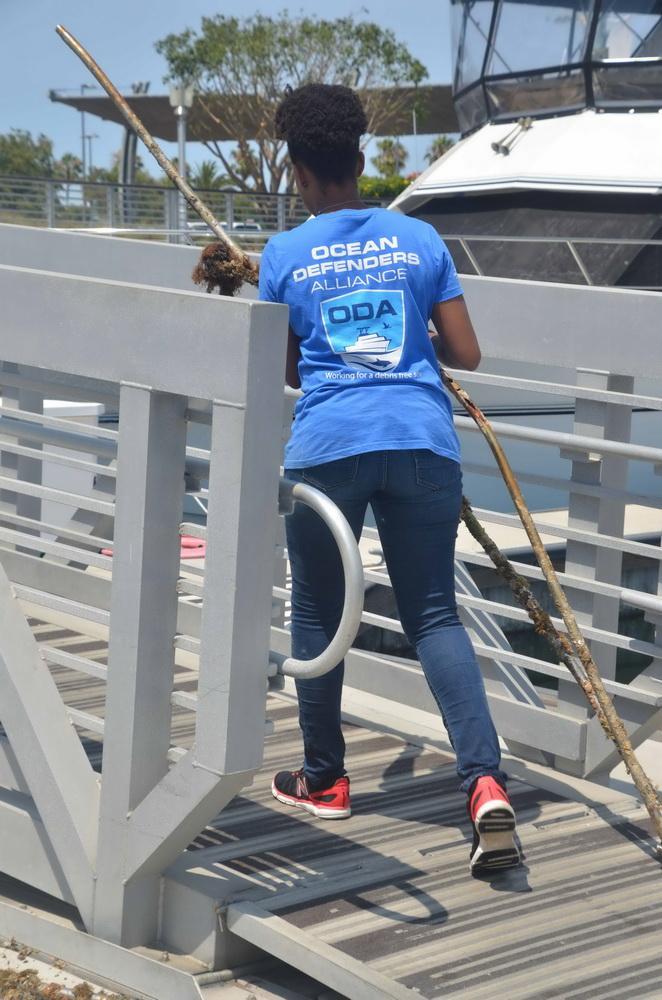 Thanks to all who made this day possible: the divers, boat captain, photographer, AND the deck crew.  Great team effort!

If you’re interested in helping out on the deck or locating debris as a SCUBA diver, please check out our Volunteer page. Then, if you’d like to pursue getting involved please download the application and return it to us. We hope you get to experience the joy of removing debris from the ocean and making it a safer place for all wildlife (and humans, too)!