We headed out from our slip in San Pedro with a small but mighty crew on Sunday, July 1st. It’s encouraging to see how much man-made debris a few determined people can remove! 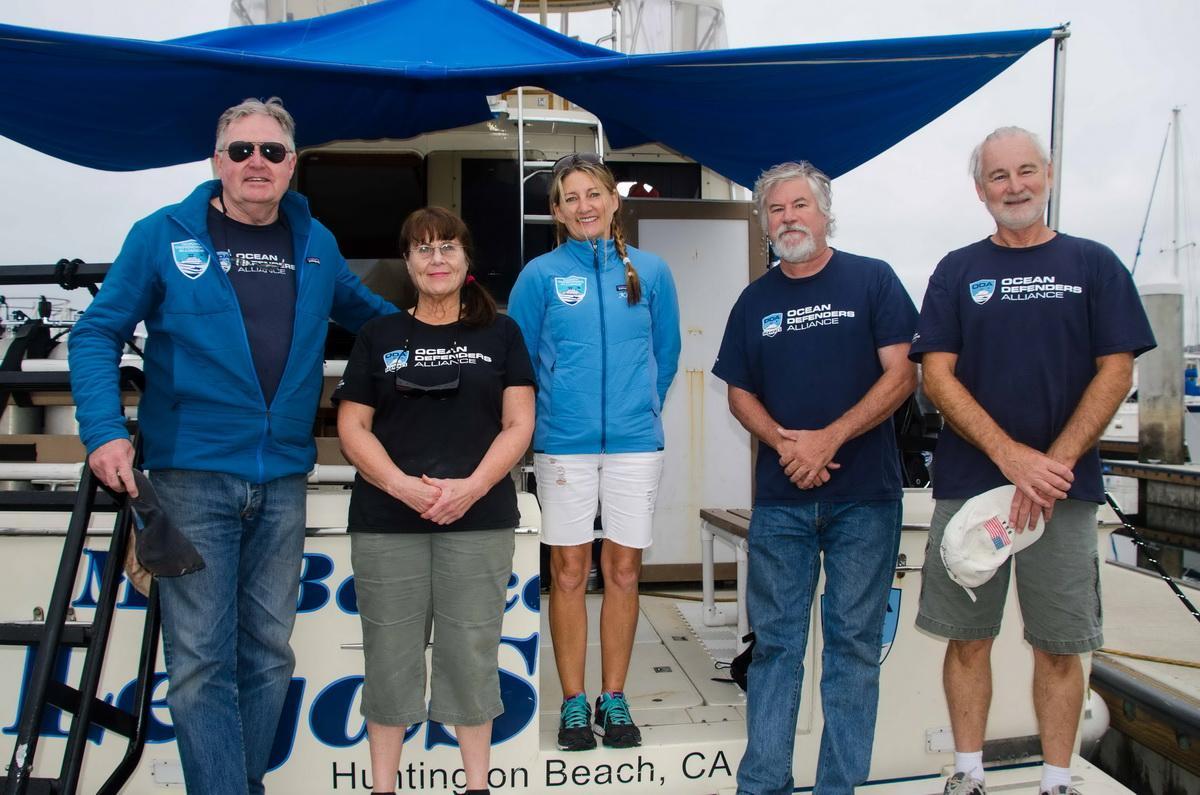 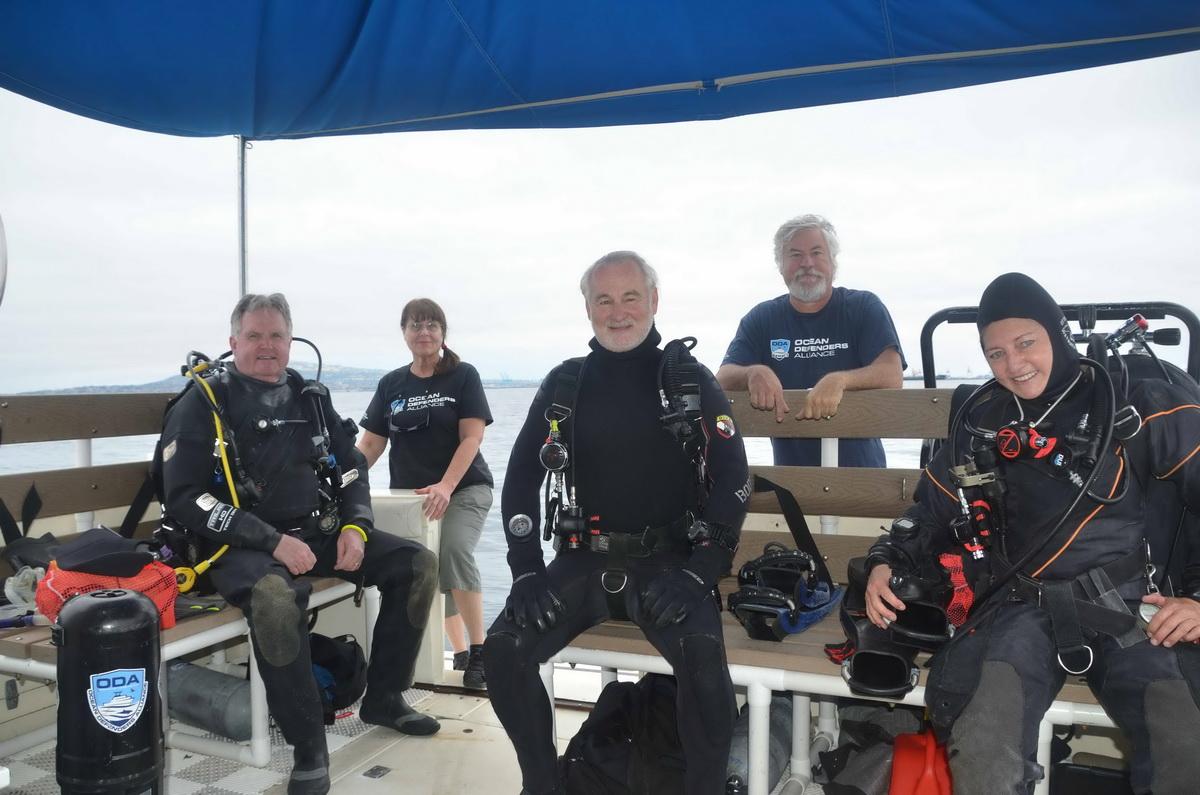 Ghost Gear in Our Path

We decided to go to a site we haven’t been to in many years.  It’s a sunken boat about six miles away from Angels Gate, which marks the entrance/exit to the Los Angeles Harbor.

Our cruise to the site was just gorgeous with flat seas, no wind, and some dolphin sightings along the way.  When we arrived, we dropped the anchor where I thought the wreck would be, in 82 feet of water.

Dennis, Kim, and Al donned their suits, grabbed their motorized scooters, and headed down the anchor chain. 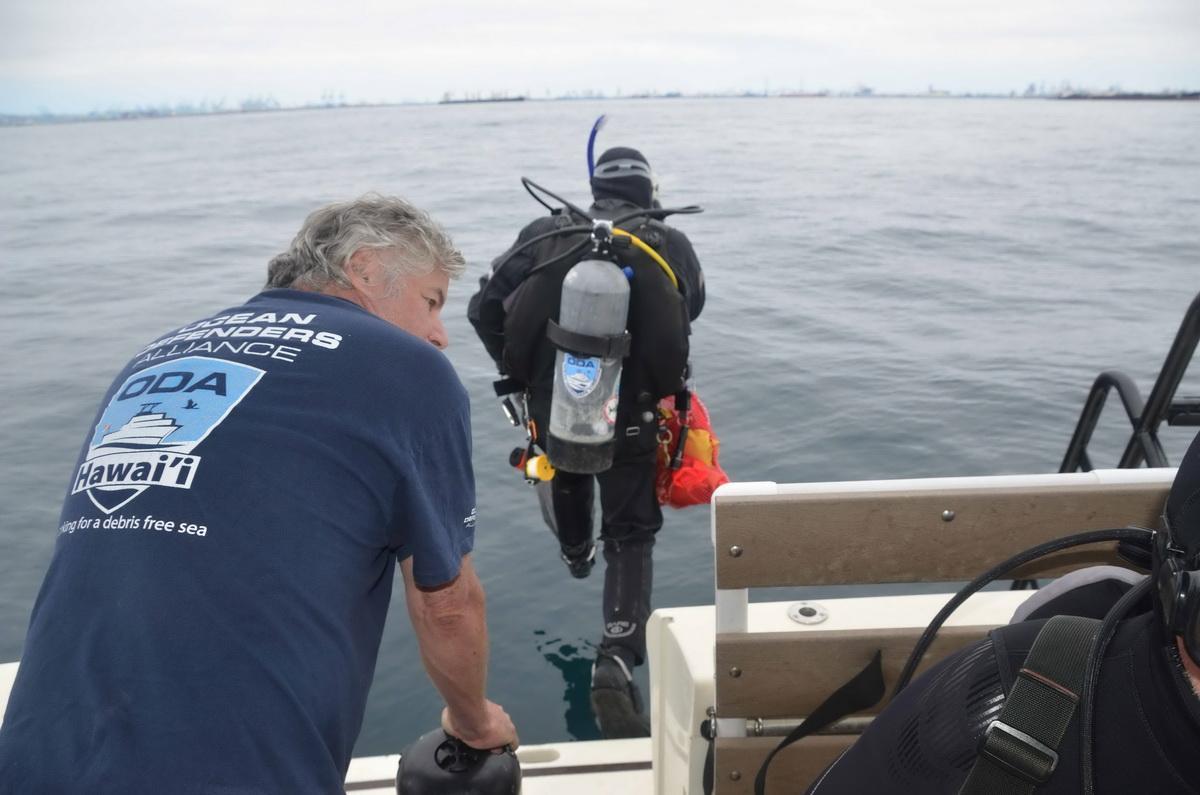 They were down for about 30 minutes before we saw a lift bag break the surface, about 200 feet away from us. 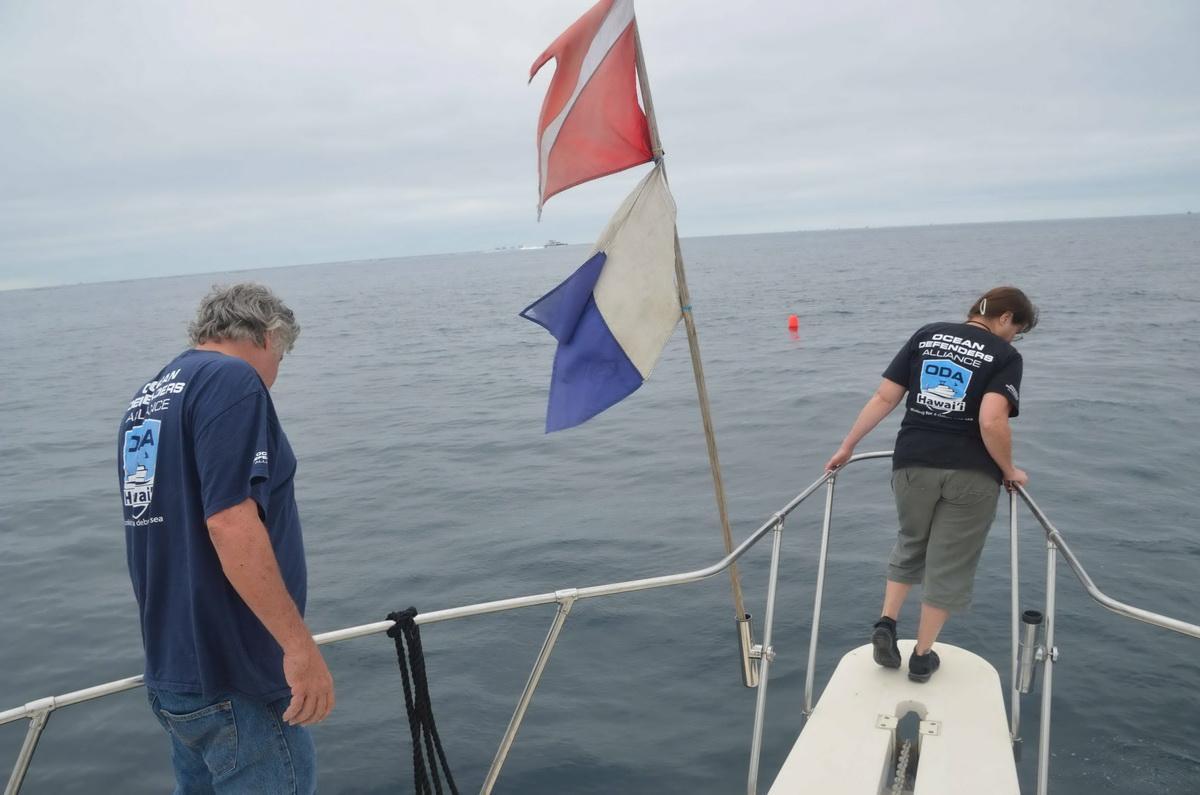 By the time all the divers were back on the boat, the lift bag was pushed by the currents to only 100 feet away.  Al grabbed a line, jumped back in the water with his fins, kicked over to the lift bag, and then attached the line to the abandoned lobster trap. Jeff and Lisa then pulled it over to the boat.

When we got it to the stern of the boat we could see that the trap’s weight bar had fallen off it, so it was light enough for us to lift on to the rear dive platform.  The trap had been in the water for at least a year and had some growth on it. We looked to see if any critters were in it, we were surprised to see about a dozen small fish in it, no more than three-inches long.

They were not trapped in the trap but were using it as a hideout.  Hiding from predators.  We tossed them back in the drink and wished them well on their efforts to find a new hiding place on the wreck.

We Find the Wreck and Confirm It Continues to Collect Debris

As we were talking with the divers about what they had seen down there, they told me that they never found the wreck; the trap was just lying in sand.  Dang, I missed it!

Here’s what happened: When we arrived and were trying to drop the anchor, we had about a one-minute lull between when I asked Jeff and Lisa to drop anchor and when they actually were able to drop it.  Turns out that was just enough time for us to drift past the wreck site.

So, we picked the anchor up off the bottom and headed back to the wreck, which turned out to be about 80 feet away.  This may not sound like a far distance, but when you have five-foot visibility it would take some really good luck to find the site when you can hardly see past the tip of your fingers… 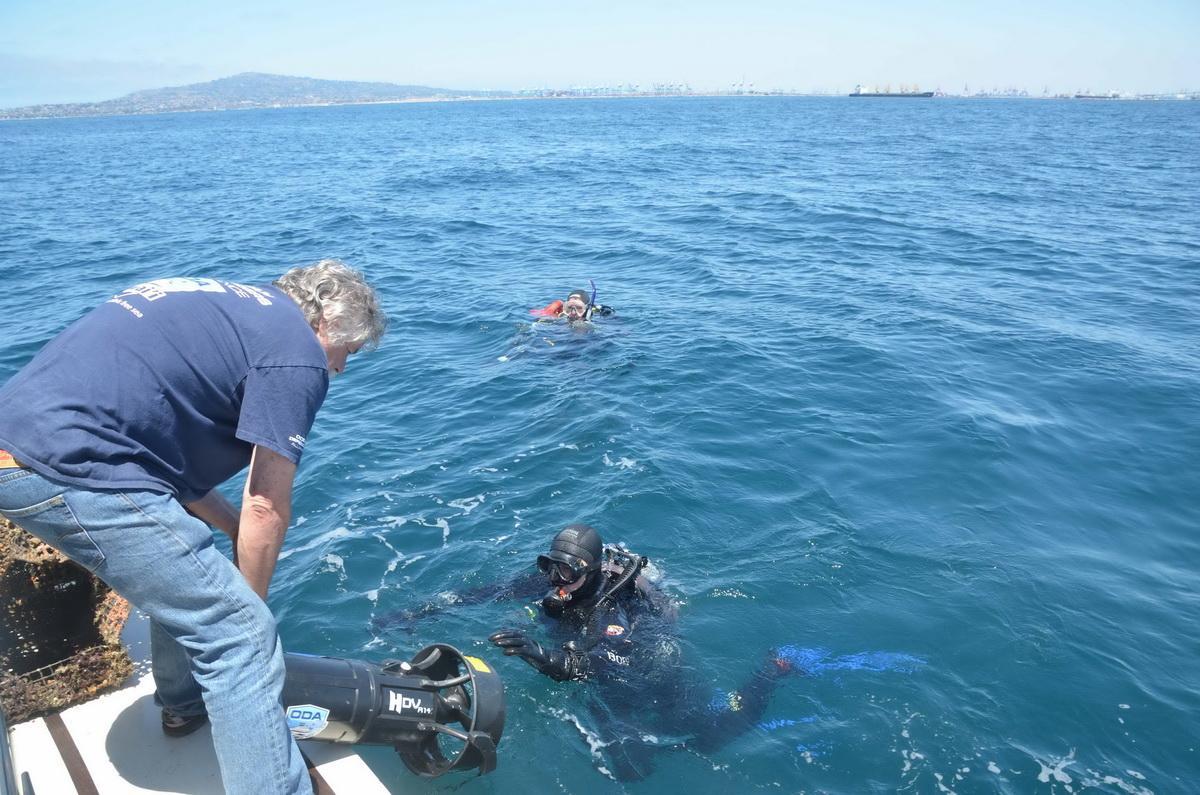 This time we coordinated the anchor drop well, and the divers descended to 80 feet and found that the wreck and the anchor had actually met this time.

Within a few minutes we had another lift bag at the surface.  Cool, another abandoned lobster trap!  As the time passed Lisa, Jeff, and I could tell the divers were working on something else, as we saw their bubbles coming from one spot for 10 minutes.

But, we never saw any more lift bags.  Turns out there was a net that they were working on, but it was too buried in the sand and entwined in the wreck for them to remove it, because they had very little bottom time left before they had to surface for air.

It was a fun dive for them, as they saw a variety of marine wildlife. They treated to the sighting of some large sheephead fish, which can grow up to three feet long and are really colorful.  There were also several sea lions that were cavorting all around the boat and buzzing by the divers 80 feet down. 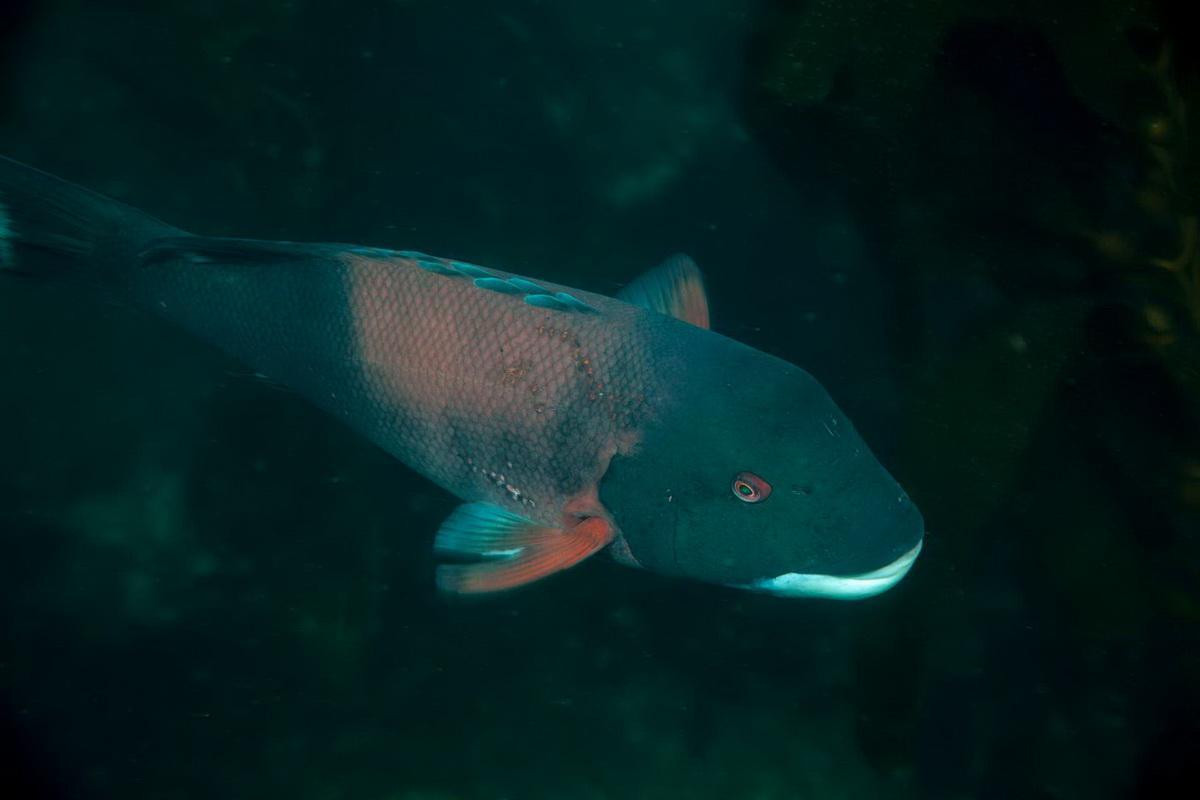 The underwater vis (visibility) was really good at this site, at almost 30 feet.  Don’t ask me how you can have five-foot vis in one spot, then move 80 feet away and get 30-foot vis… Makes no sense, but nature (and current) moves in mysterious ways. 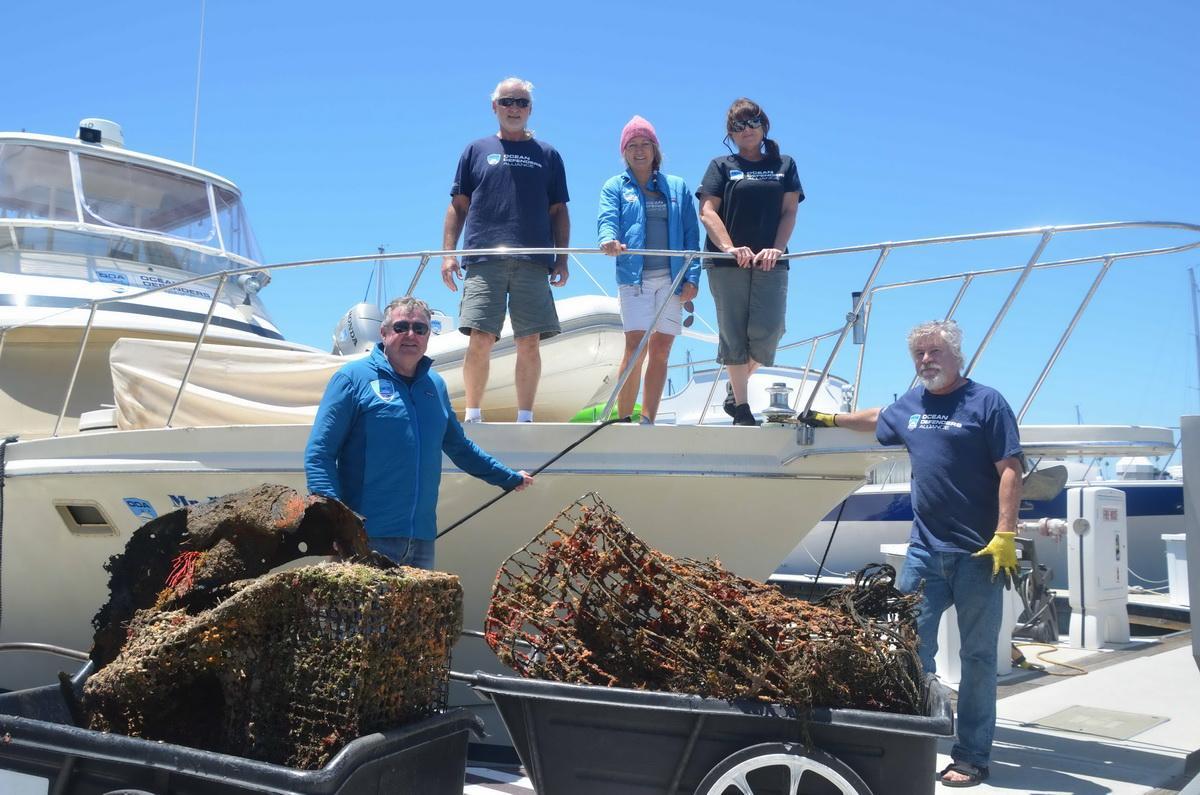 So, two more traps are out of the water, and we got about 200 feet of trap lines, a small amount of net and some other man-made debris that was made out of plastic.

On the 4th of July, I was cleaning the boat when I saw a young male sea lion cruise by the LegaSea.  He found a spot on the dock to sun himself.  He seemed to smile in approval of our efforts and the boat itself…  He’s got good taste! 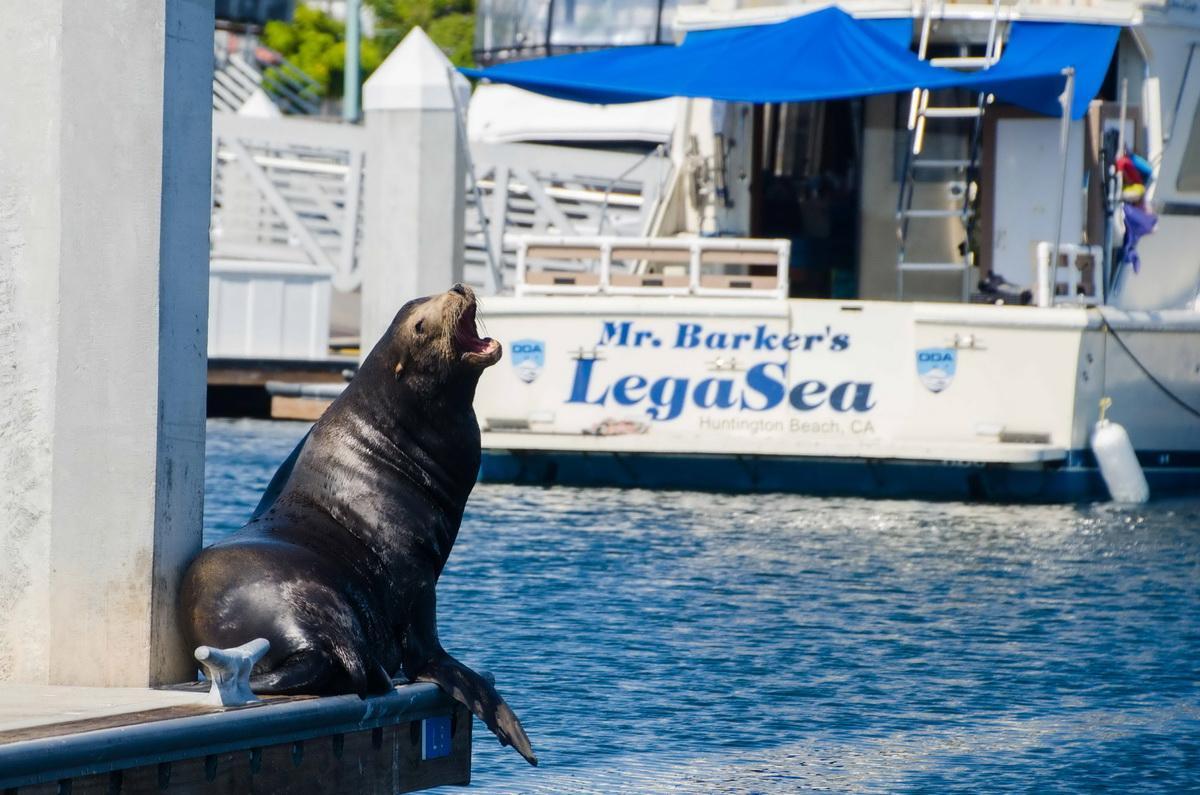 You can make more seal lions happy by becoming an Ocean Defender! Your donation today will help fuel our boats so we can head out to sea to get more hazardous marine debris of their way. :)