With Southern California roasting in the heat (it was 106 degrees on my ride to San Pedro), a few diehards wanted to try to cool off…

So, on Sunday, August 16th, a small crew of five of us decided to take the LegaSea out to the Los Angeles Harbor breakwall and pick up where we left off on our last outing, July 30th. 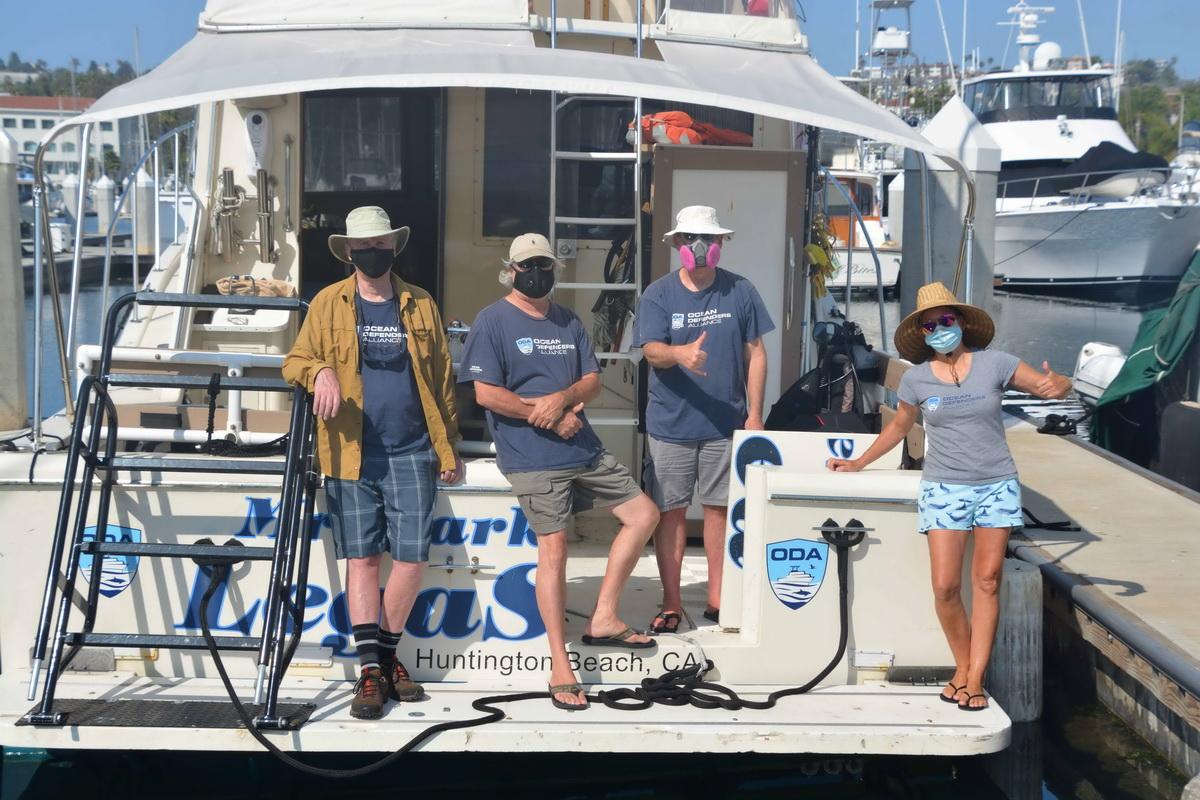 During that dive we had to cancel the dive almost before the divers even hit the bottom!  The underwater visibility was so bad that divers Jeff Connor and Geoff Walsh couldn’t even see their fins let alone each other.  So, we had called it a day and headed back to the slip.

This time out we were hoping for better dive conditions and were hopeful as we exited the LA Harbor and rounded the corner to continue on our Seven-Mile Wall Crawl.  We were pleasantly surprised to see absolutely no waves and the surface conditions couldn’t have been better.

Veteran ODA volunteer divers Kim Cardenas and Geoff Walsh climbed into their dive suits as we discussed strategy and what we thought we could accomplish.  But because of the high temperatures and black dive suit, Kim quickly started to overheat and asked Jeff Connor to      dump some water on her head.  That worked for a few minutes, but she had to jump in the water to get her body temperature down.  Geoff entered the water just a few minutes later, and feeling cooler, they headed for the breakwall. 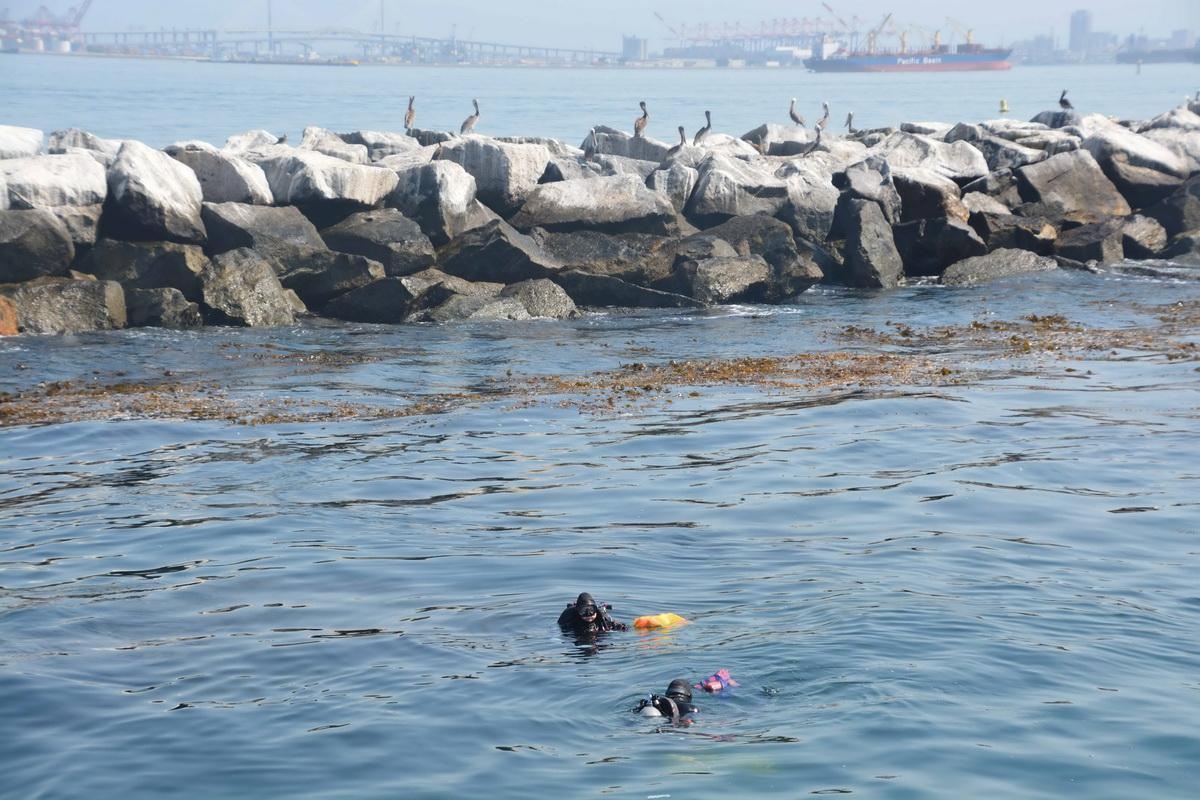 As usual, debris is found in this area!

As they descended under the surface, Jeff and Jim Lieber launched the RIB (rigid inflatable boat) and started to follow the diver’s bubbles at a safe distance.  After roughly 20 minutes, two lift bags broke the surface. Jeff and Jim pulled up next to them and hauled the debris onboard the RIB. 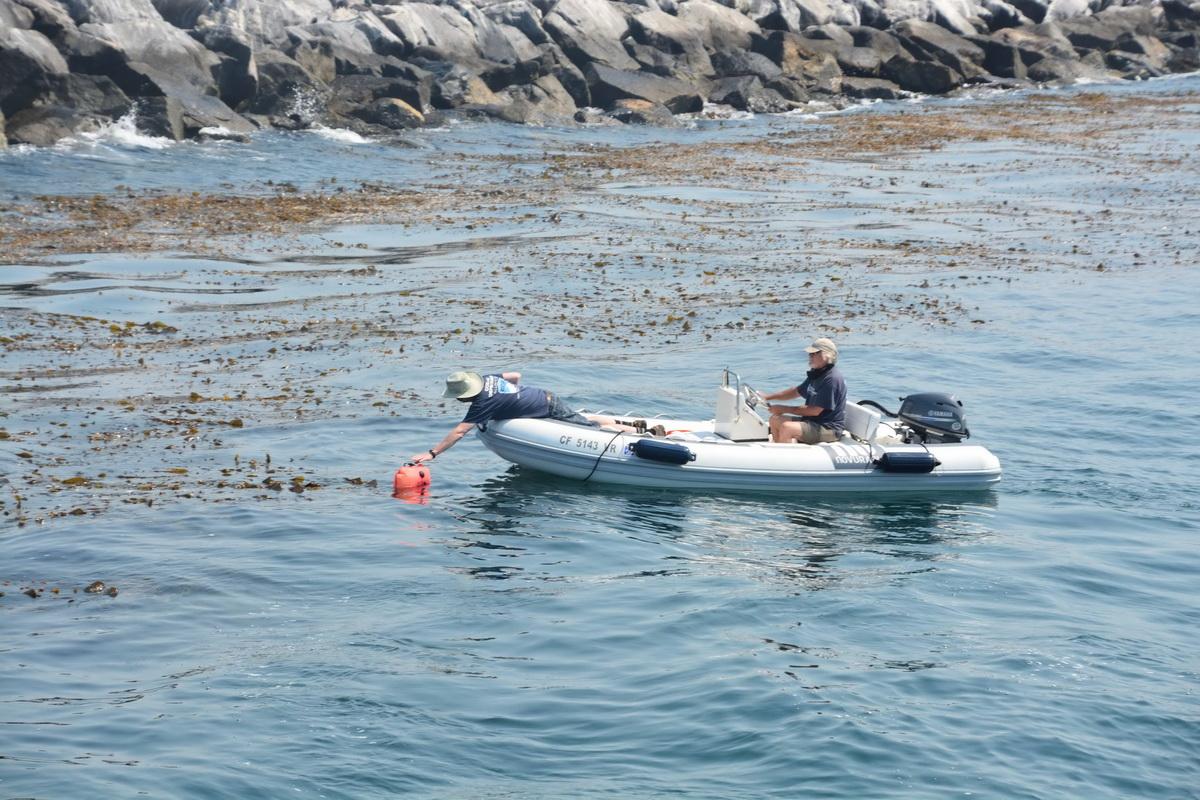 About five minutes later another bag popped up, but when they tried to get the contents onboard, they found that it was a lobster trap.  Way too heavy and bulky to get on that small boat!  So, they towed it over to me on the LegaSea. 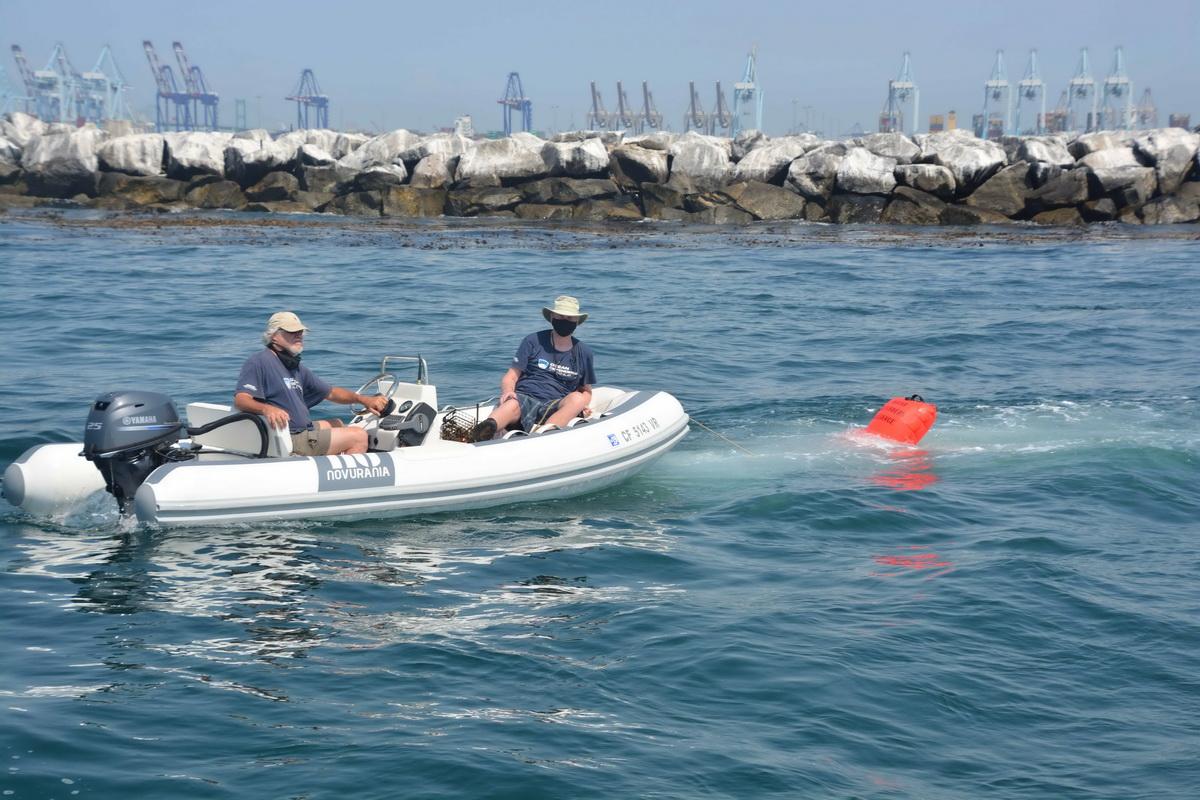 Because of ideal sea surface conditions, the boat wasn’t moving much, and I felt safe enough to leave the bridge and operated the davit (crane on the front of the boat).  Jim hooked the davit line to the trap and we soon had the trap on the front deck.  Alrighty! 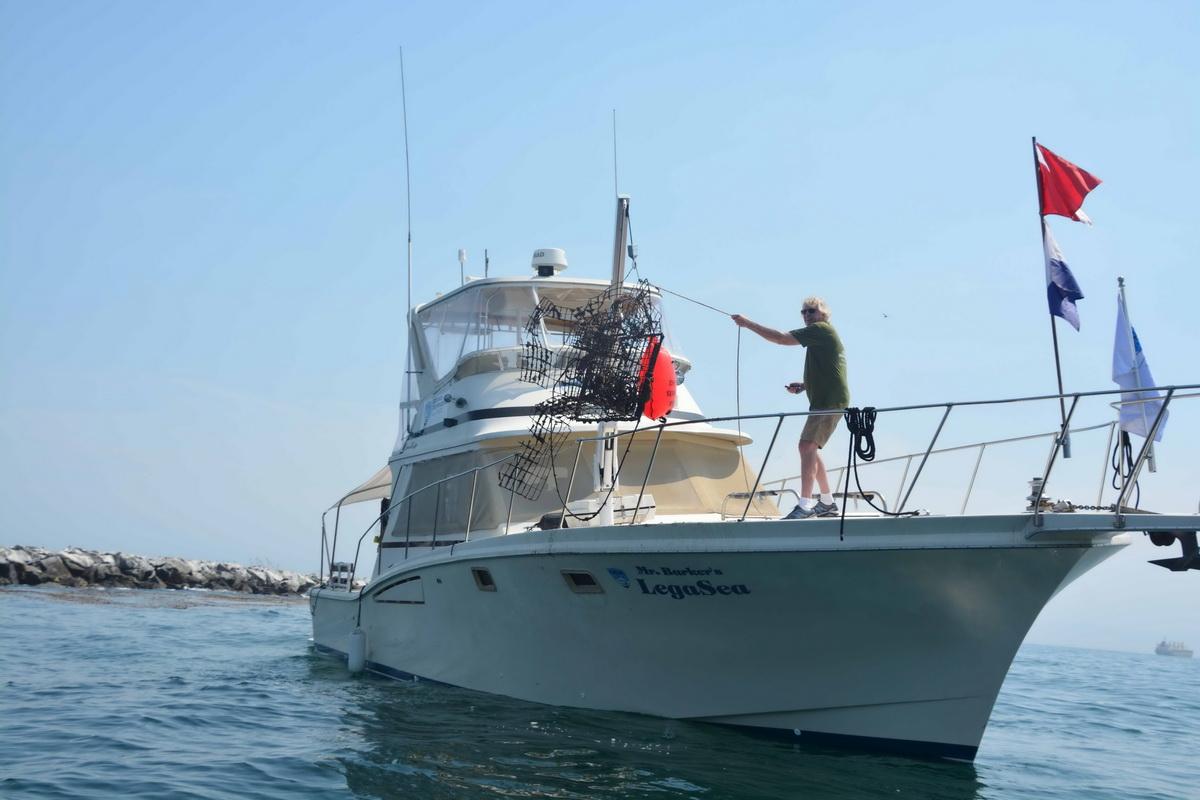 A funny way to find a trap

Pretty soon Kim and Geoff came back to the surface and we had both of them onboard.  When they started telling us about their adventure, we realized how lucky we were.  The visibility (vis) was horrible, at less than five feet.  Even though they were using their scooters, they had to go really slow for fear of running into the rocks of the breakwall.

Kim relayed that it was so bad, the only reason they found the trap was because the trap lines were floating in the water column, and it hit her in the face.  Hey, what is this?  She followed the line down like reading brail and lo and behold there was a trap on the other end of the line! :-D

Learning in this new paradigm

With the heat of the day just draining us of energy, and the bad vis making our further search feel hopeless, we decided to call it a day and come back when the weather and dive conditions would be more favorable.

It’s a real challenge doing all this work with such a small crew.  But because of the COVID-19 pandemic, we’re doing our best to keep the number of people onboard to a minimum.  We’re figuring it out as we go along, but we now realize that five people is NOT enough to do this safe and efficiently.  With only five people, everyone has to be on top of their game all day long and perform all the tasks that are normally handled by 10-12 people, with very little time for a break.  Next time out we will see how it goes with six people.

The day was not a total waste, we got one trap, 200 feet of trap line, 100’s of feet of fishing lines, and half a dozen pieces of trap remnants.  The trash container was filled up with debris, and we covered about 300 more yards of our Seven-Mile Wall Crawl. Oy, this is going to take a while… 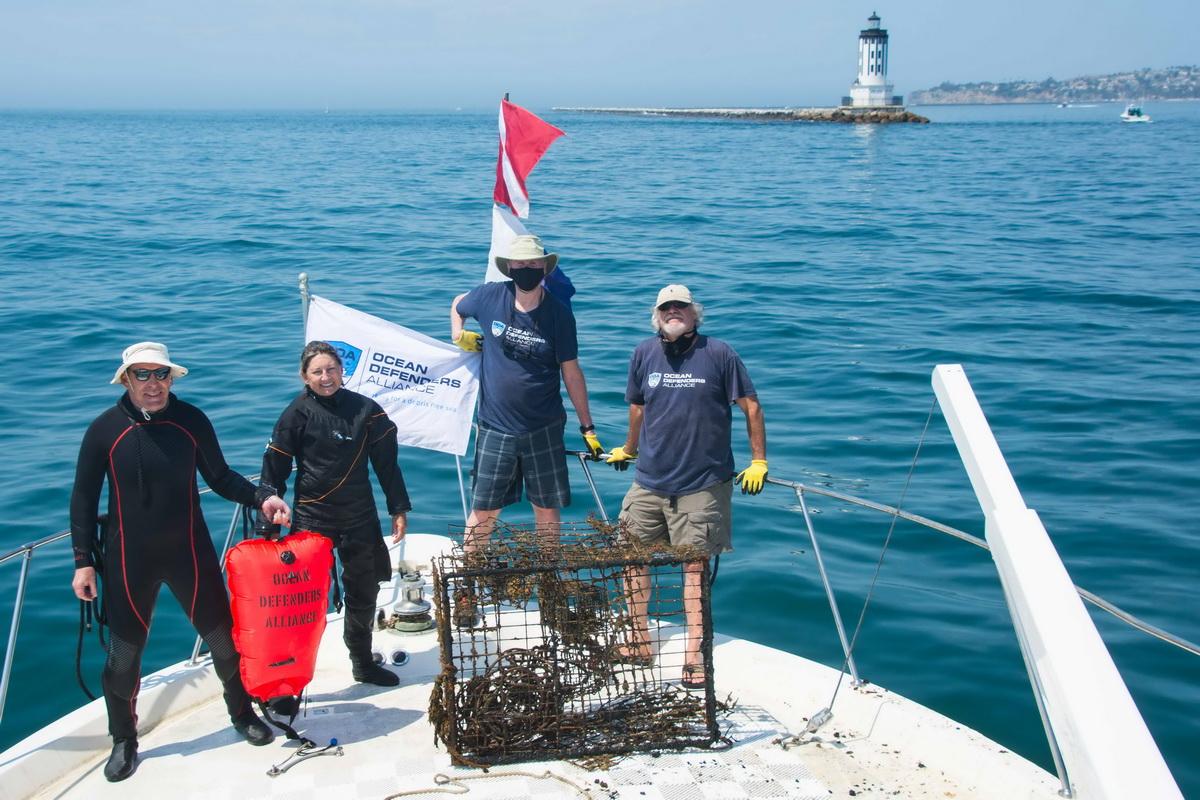 Thanks Kim, Jeff, Jim, and Geoff.  Even in the blistering heat, you guys rock!

We'd love to have you on our team to ensure that no matter what's happening on land in our nation, we continue to help defend the oceans! Please contribute to keep our boat on the water and our crew at sea, doing what we do best. Thank you!