Aloha from Hawaii! Before I tell you the story of this outing, I want to point out that at the bottom of this article, we have a photo gallery with a ton of photos of all these great volunteers!

Two days after I arrived on Oahu, on August 17th, I was out on the water with the other Ocean Defenders Alliance (ODA) volunteers. 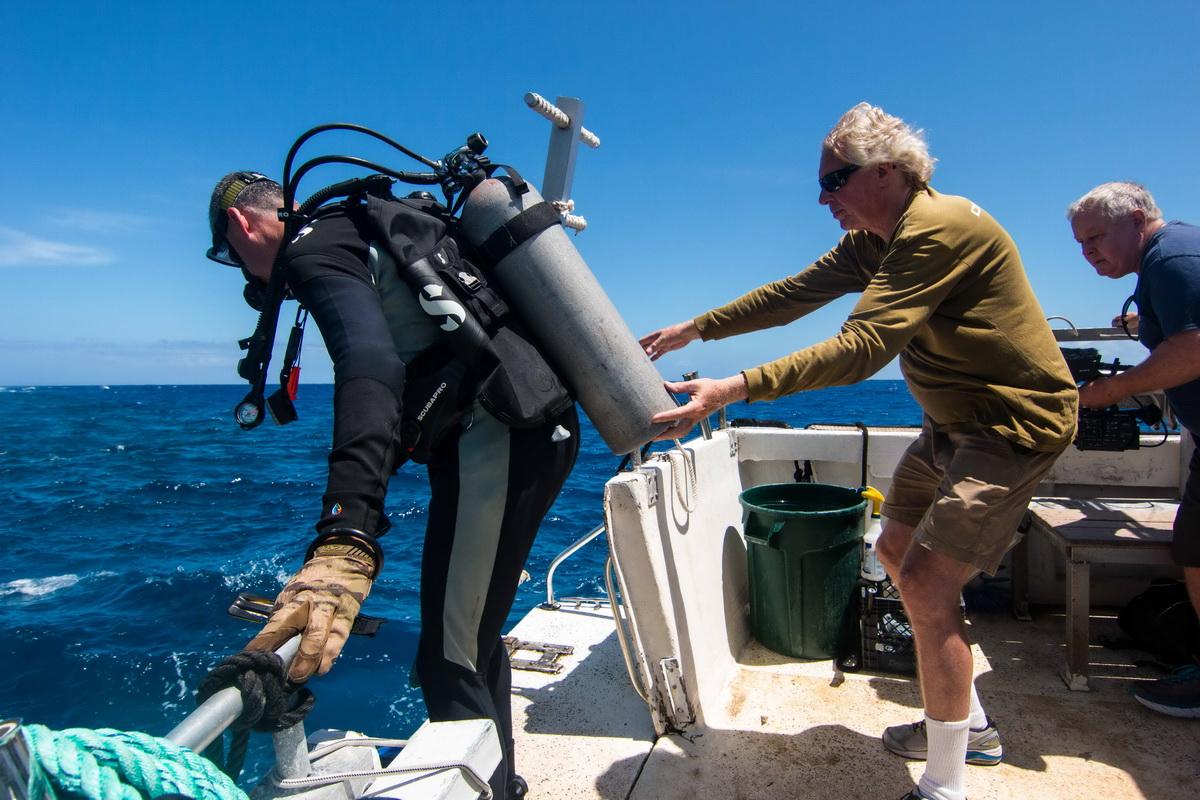 We met at 1pm and as we were meeting with the other dive volunteers, the talk was that sea conditions were going to be pretty rough.

Captain Joe, the skipper of the Island Divers Hawaii boat the Sea Fox, had taken divers out earlier in the day, and told us that there were 5-6 foot waves crashing into the sheer cliffs of China Walls, which is where were heading… 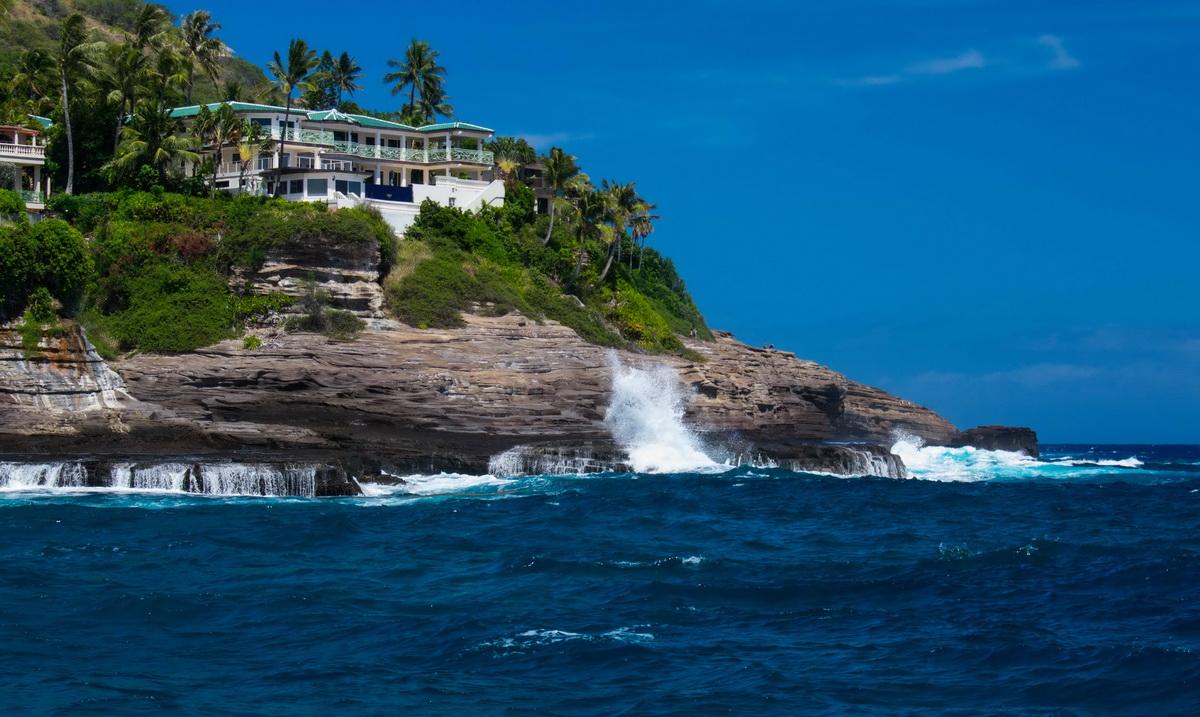 This is the dive site where we’ve been removing abandoned fishing gear for about the last three years.  We’ve had to cancel some dives because the conditions can get “hairy.”  Safety is our number one concern, and we will never put people in the water if conditions are questionable.

After discussing whether we should go or not, Matt Zimmerman (owner of Island Divers Hawaii) suggested that since we had a boatload of divers ready to go, we should proceed to the site and see if the conditions had gotten any better as the day wore on.

So, we loaded all the divers and their gear and pushed off for the great unknown… 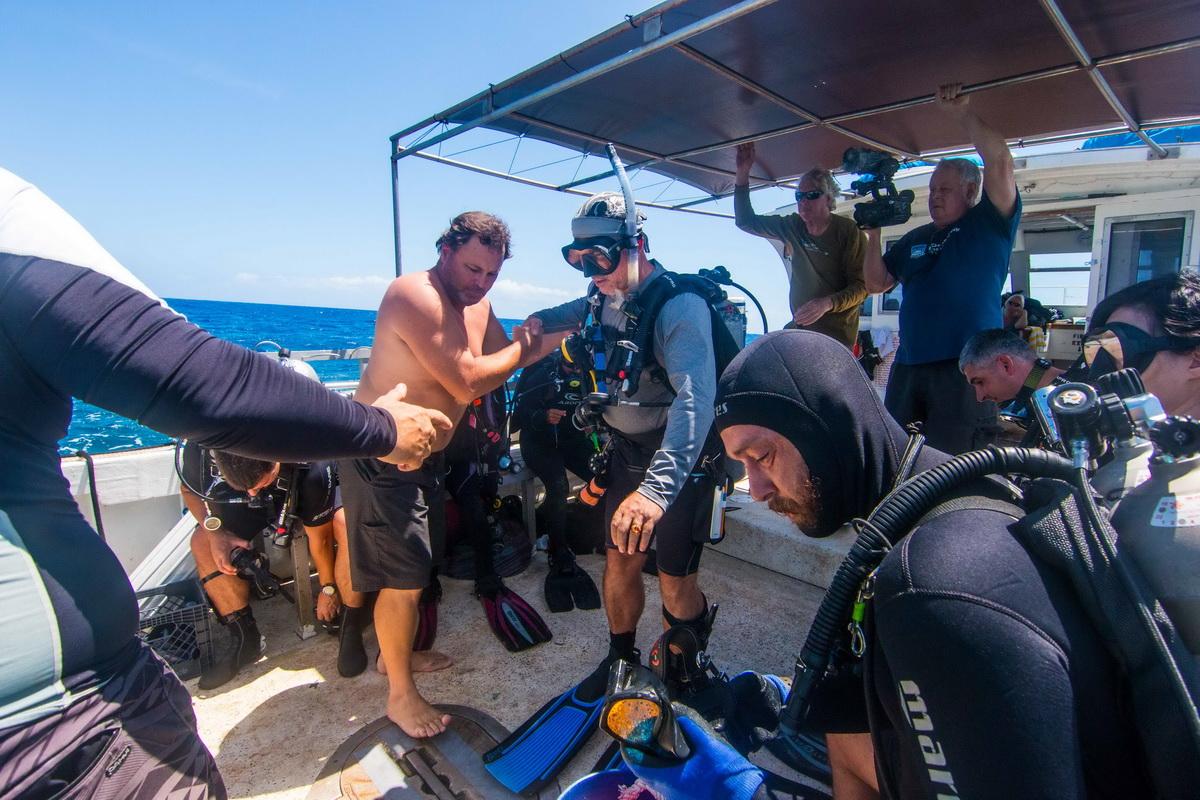 We motored out to the site, about three miles away, and could see that there was no way we were going to be able to dive our intended site.  But Matt noticed another area that seemed to be protected from the waves.  He thought we wouldn’t find as much abandoned gear here as the other site, but hey, anything is better than nothing!

Next thing I knew, all 20 divers, were in their gear and ready to jump.  Captain Joe pulled the boat up close to the cliffs, and the first team of 10 divers splashed and quickly descended to the bottom.  In this case the bottom was just 25 feet below the surface—not too far!  About five minutes later we dropped the other 10 divers off at the same spot. 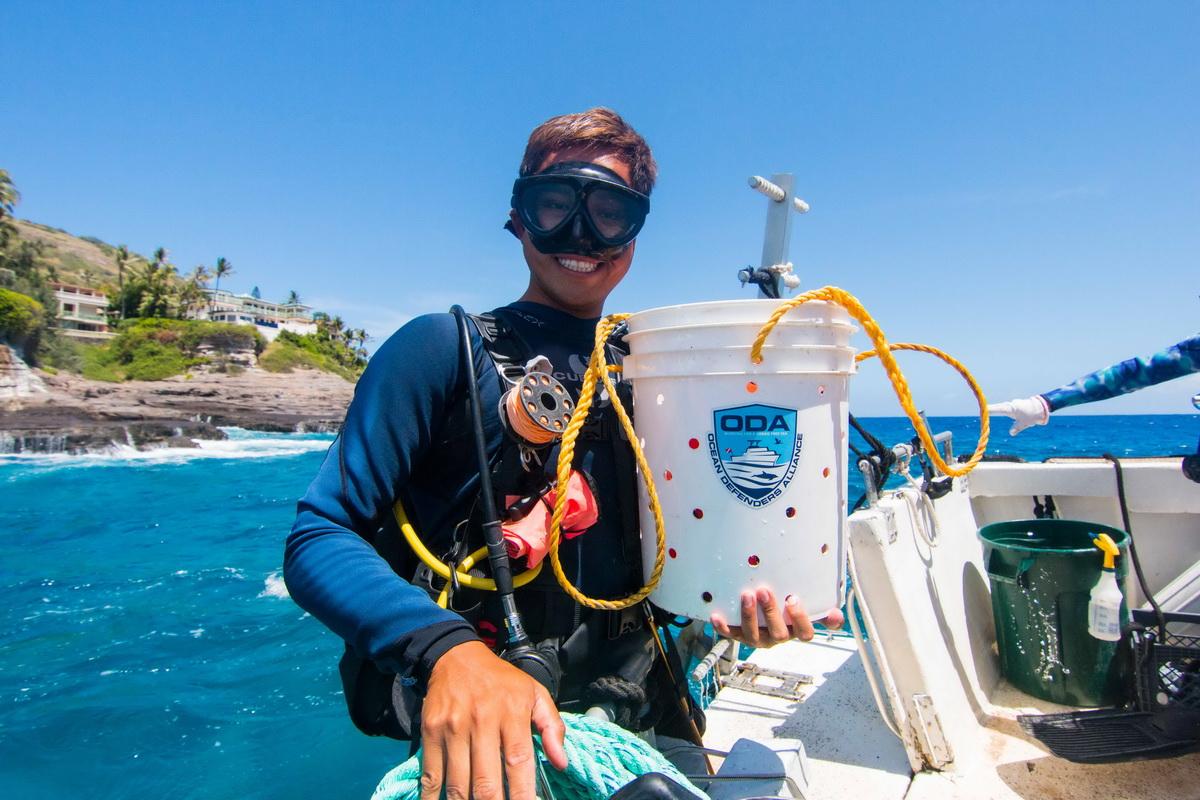 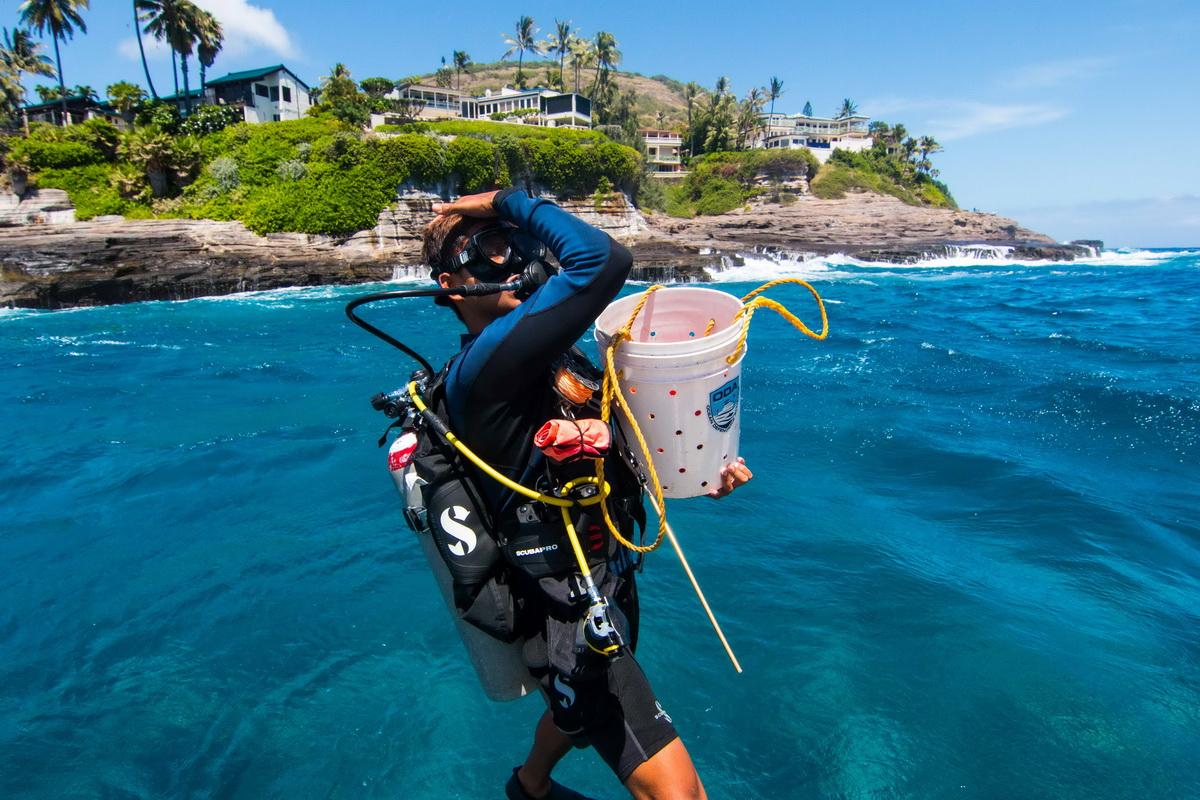 We then motored about 300 feet away and kept our eyes on the surface to see when the teams started to come up.  We waited for 30 minutes, then 40. Finally, they surfaced 50 minutes after they had gone down

Because of the shallower water, the divers didn’t consume as much air and were able to get a lot done in a small area.

Crew Gets Their “Catch of the Day”

Four divers had lift bags with buckets full of stuff. 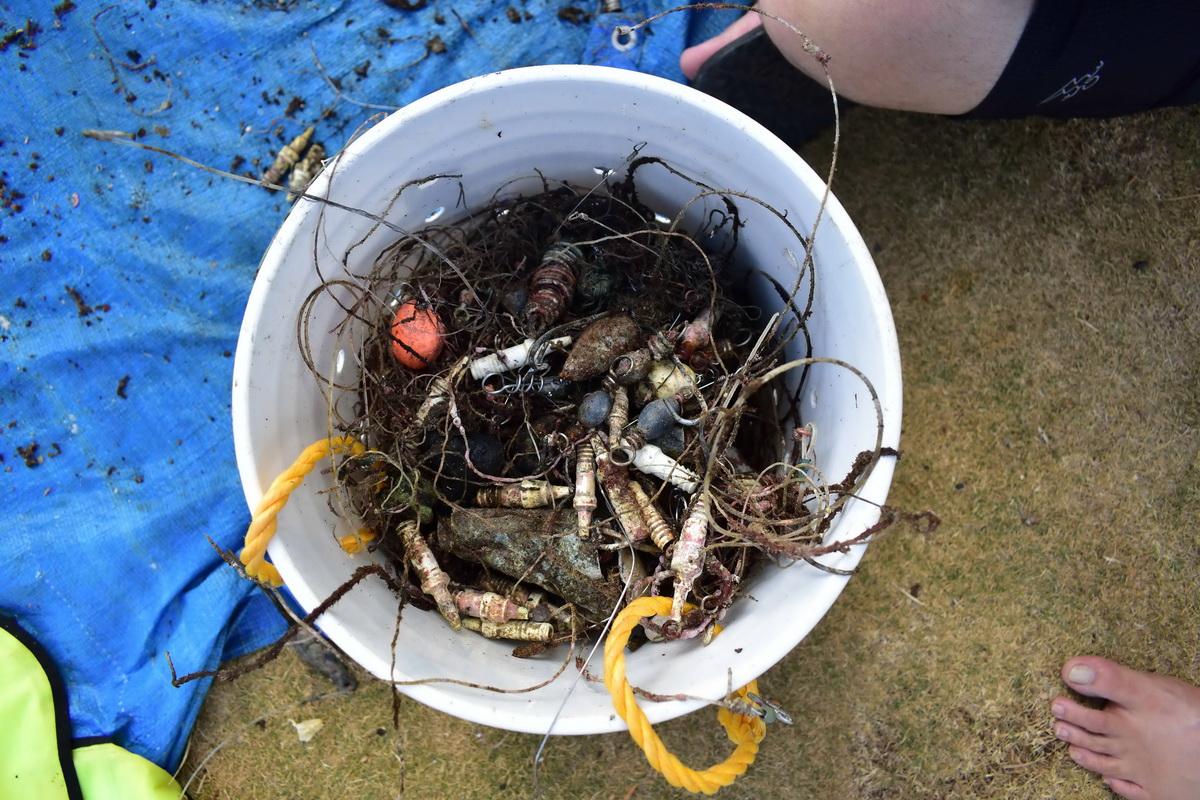 As we were yanking the buckets out of the water, each one was getting progressively heavier.  To the point where with the last one, which—Volunteer Coordinator Ken Staples was handling—required three of us to get onto the back step of the boat. 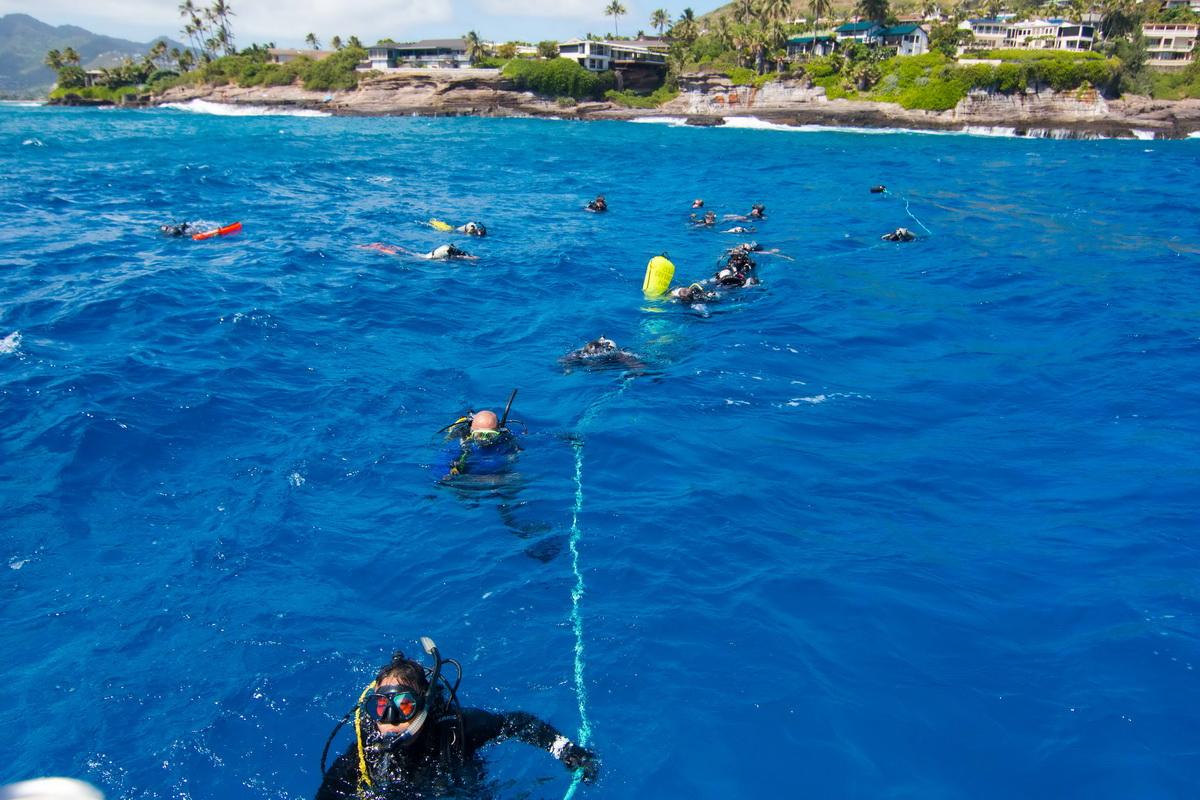 While the divers got out of their gear, I asked a few of them what they had seen down there, any cool animals?

Each one said they were too focused on finding the fishing gear to have a look around.  What a team!  All work and no play on this dive. 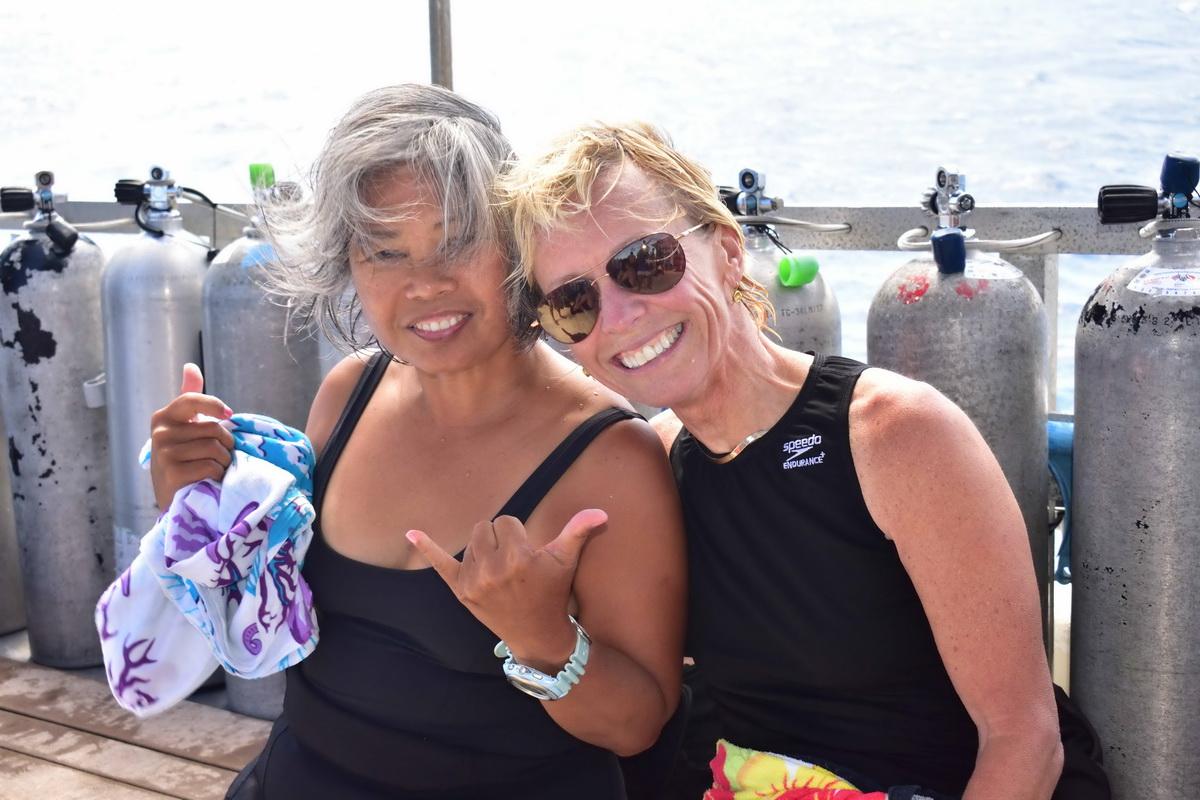 When we got back to the boat slip, the buckets were packed with mostly lead weights, which weighed 107 pounds.  We also hauled in about 3,000 feet of fishing lines, and another 30 pounds of plastic debris!  That lead will not be poisoning the reefs anymore, and the fishing lines will not be entangling any fish, turtles or corals.

Getting the Word Out to Help Our Oceans

Before this outing, we had sent a press release to some news stations on Oahu.  One of them responded and did a short blurb about our cleanup dive.  The piece ran on KITV, on their evening news at 5 and 10pm.  We’re glad some of the people living on Oahu got to hear about our work cleaning the local waters! 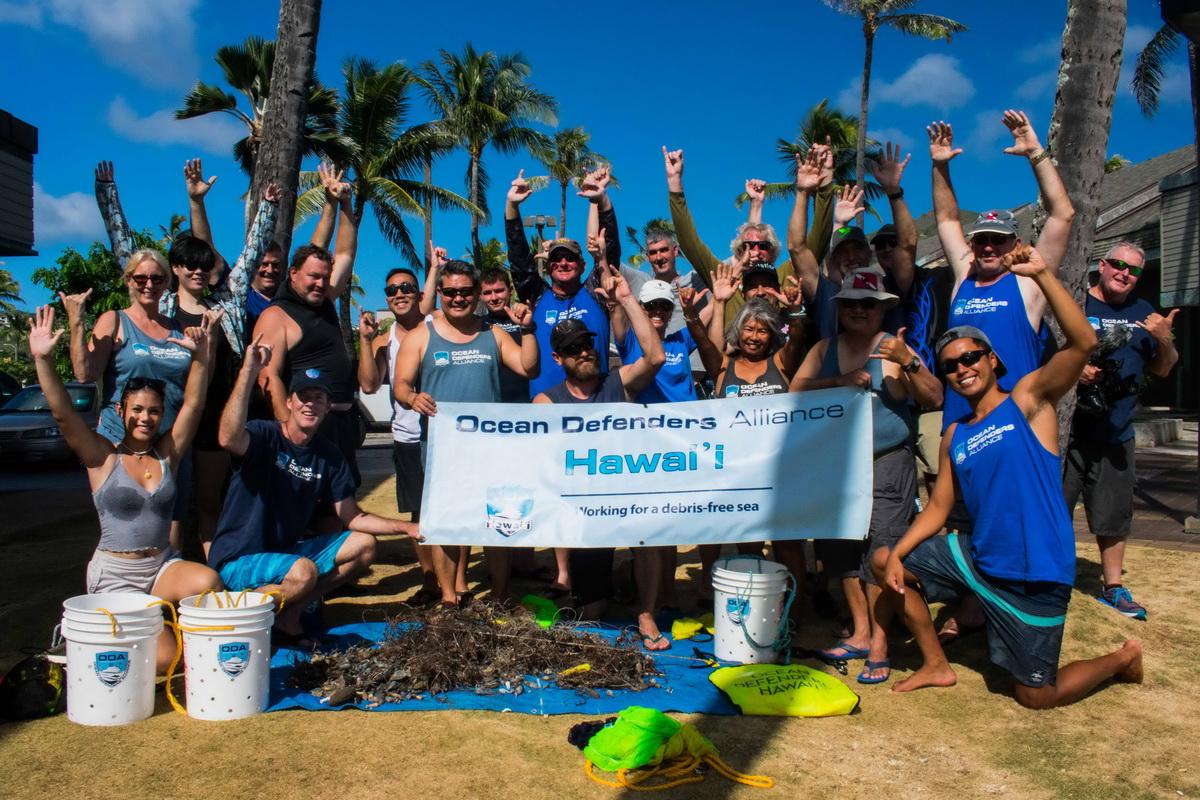 I want to thank Ray Hollowell (founder of Sea Inspiration) for coming along and shooting some topside video for us.  KITV used some of it for their story. 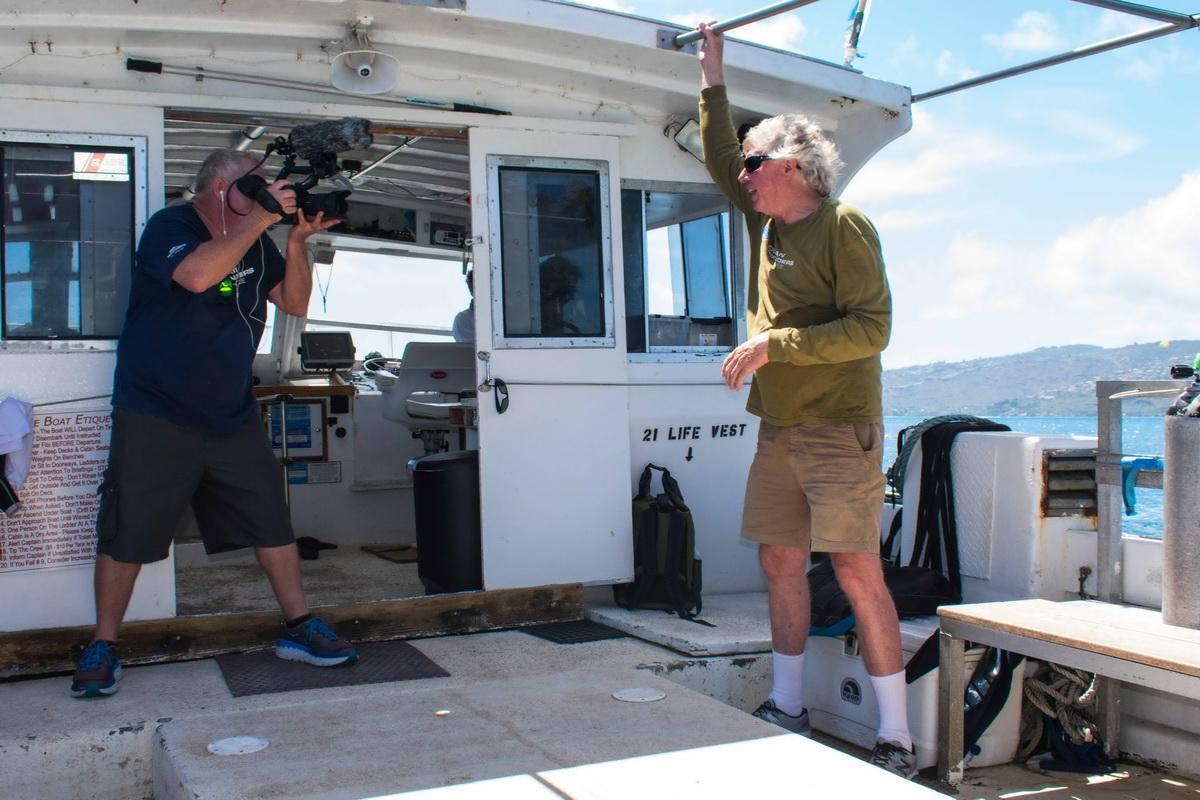 Ray doing what he does best: filming and interviewing!

Thanks also to veteran ODA volunteer AJ Jaeger for taking all the still shots you see here. Since she's always behind the camera, we'll have to make a special effort to get a photo of her next time! We appreciate you, AJ!

Commendation & Encouragement to the Crew

Hanging out with these dedicated divers is a wonderful experience.  Everyone had smiles on their faces and were glad to be a part of the solution rather than part of the problem that many humans are exacting on our friends in the oceans.

As anyone who has been paying attention knows, the natural world is changing rapidly, right in front of our eyes.  It can feel overwhelming at times because the large corporations of the world want to stick with their “business as usual” plan.  At the same time our governments seem incapable of doing anything to change course.

That is why it is SO important for us as citizens of this planet to put our collective will together, do what is within our abilities, and make meaningful change.  ODA divers have unique skills, and their enthusiasm is helping to make the underwater world safer for our marine wildlife, as well as leave the place in better condition than we found it.  Even if it is only: ONE HOOK, ONE LINE, ONE SINKER AT A TIME.  It all adds up in the long run.

ODA’s partnership with Island Divers Hawaii is a perfect match between the nonprofit and the for-profit worlds. 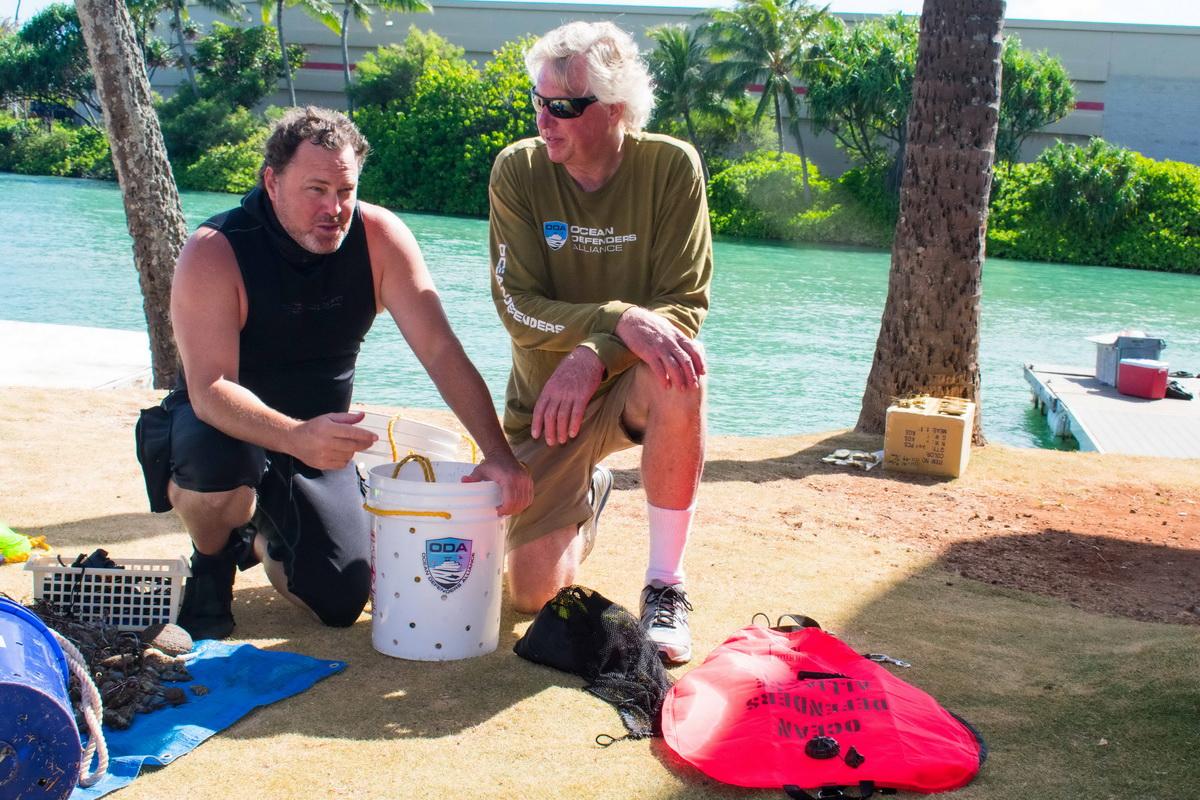 Matt Zimmerman of Island Divers Hawaii with Kurt -- a partnership made in paradise! ;-)

Our work is made all the better because of all the great people who consistently go out on these cleanup dives.  I’m proud to say I know you all!

Before we part ways for now, I just want to make sure: If you haven't "liked" our Facebook page, please visit there now and give us the ole thumbs up! Thank you! Go to the ODA Facebook page now!