Just when you thought you’d had enough of the year 2020 and were glad to see it fade into the past, ODA Hawaii made sure to send it off in fine fashion.  We got rid of a FAD!

Not in a fashion sense, or a political sense, but with a sigh of relief…

FAD’s in the ocean realm are Fish Aggregating Device’s (FAD).  These contraptions are designed to float on the surface of the water and are large enough to create shade underneath them. It's a bit hard to see, but here is the one we found (lots more photos in our gallery below): 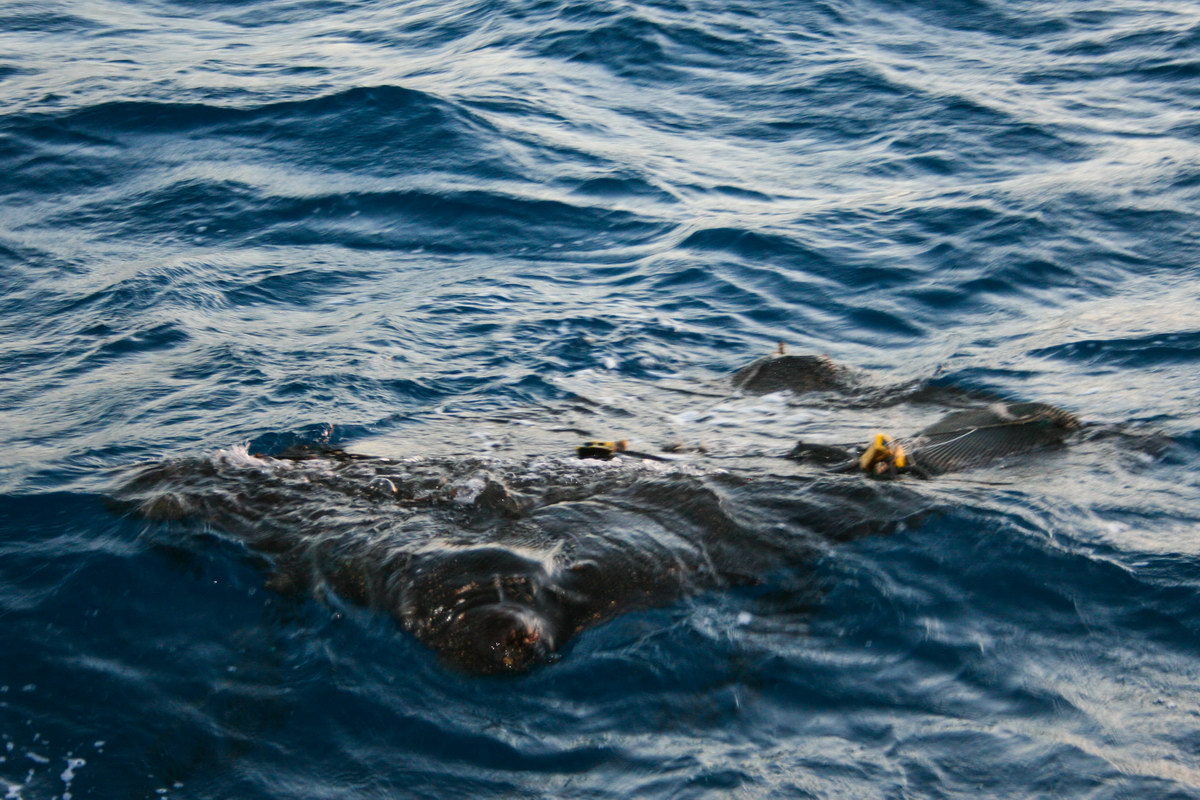 This offers an opportunity for fish, turtles, dolphins, and other open-ocean species to spend some time underneath them as they cool down under what otherwise is the relentless equatorial sun.  Yes, fish do get overheated!

The fishermen know this and use these devices to lure the fish. Once the fish concentrated there (unlike the surrounding waters, where fish are few and far between), the fishermen drop their hooks in the water.

These FAD’s can be simple to construct or slightly more complex, depending on who is doing the building.  The state of Hawai’i has several of these throughout the islands that are well-built and lighted, so they don’t become a navigational hazard.

Components of a FAD

The basic design has three components to it.

The FADs that are put in place by the state have lights on the platform, so people in boats navigating near them can see the structure and not run into them.  But there are thousands of these things set in the water throughout the world that don’t have lights on them and aren’t even anchored.  Floating hazards…

What has this got to do with ODA?

On December 30th, our Oahu boat partners Island Divers Hawaii, were returning their clients from a dive outing at a site near Hawaii Kai, on the south side of Oahu.  Captain Tim Hollandsworth noticed something floating very low in the water and took a closer look.  It was a large rectangular shaped object, about 6 feet by 8 feet.  It had netting all over the top of it, and he could see a big line attached to it that was running down to the bottom.

He quickly figured out that it was a FAD.  But what was is doing here, right near the entrance to the boat harbor?  Tim called Matt Zimmerman, who owns the boat and the dive shop, to ask what he thought he should do.  Matt and I had been talking recently about having an ODA Rapid Response Team to jump into action if/when a situation like this comes up.

Matt then contacted me, and we agreed this would be a perfect time to put our previously discussed plans into action.  Matt then called ODA’s Oahu Coordinator Ken Staples to apprise him of the situation.  Within two hours, we had three divers at the harbor where they boarded the vessel Sea Fox and headed out to where Tim had last seen the device.

In addition to Tim and Ken, ODA volunteers Glenn Roberts and Ed Sissino jumped at the chance to help out.  When don’t they!?!  I have a hard time recalling when all four of these guys weren’t on an ODA outing.  They really are the core of our ODA Oahu dive team.  Ken and Glenn are both on our Board of Advisors so we appreciate their ongoing expertise in Oahu marine-related matters.

They left the dock around 6pm with Tim handling the boat. The other guys donned their dive gear and discussed how they were going to go about evaluating the situation.  All three of them were in the water by 7pm. 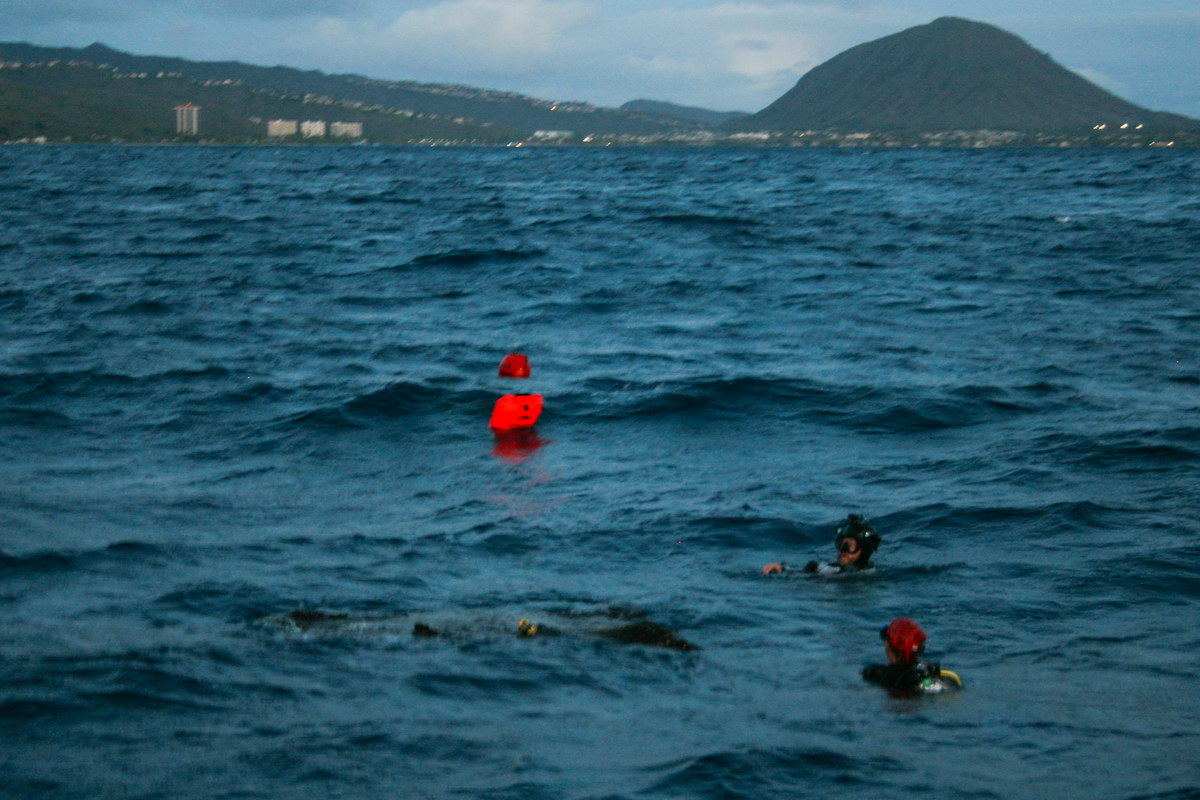 It was nearing dusk, so they had to work fast.  Ken handled the video camera, and Glenn and Ed were prepared with lift bags and ready to do the heavy lift if it was needed.

Luckily, the water wasn’t very deep, about 40 feet.  So, they had some reasonable light and quickly could see the situation. 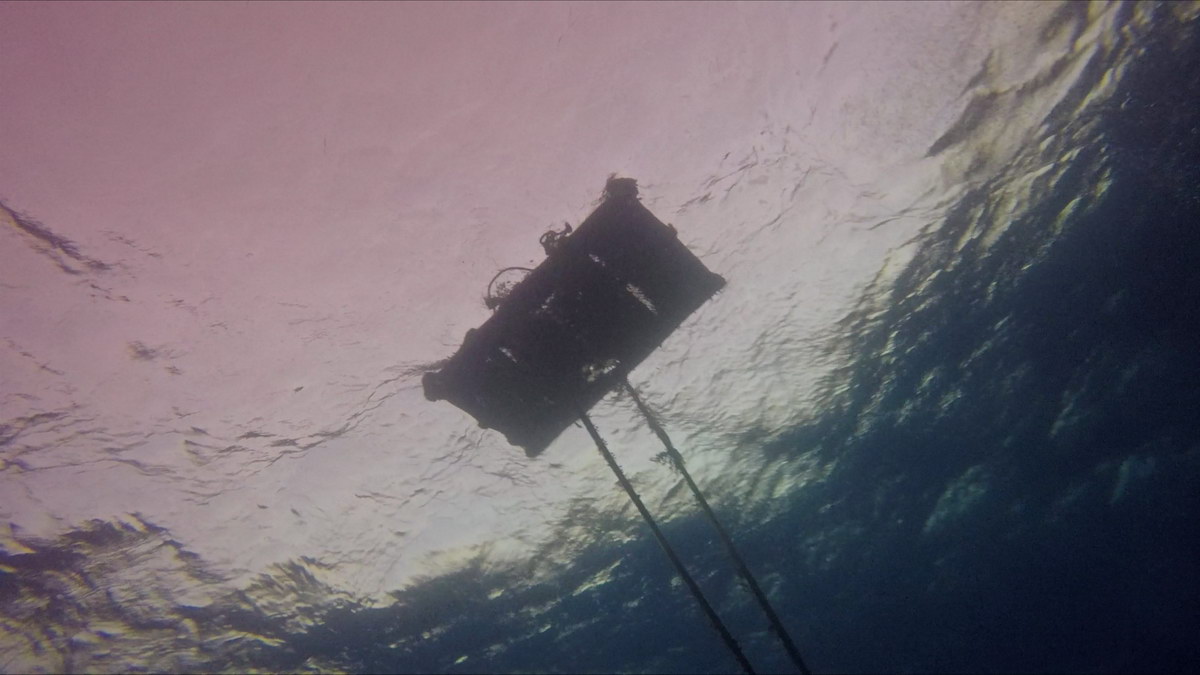 This was a homemade device and did not have a proper anchor, but whoever made it used some dead coral heads to weigh the line down with the hope that that would keep it in one place.  Ha!

The dead coral heads were encased in a bunch of net, which was attached to netting that had been rolled up into a bundle and acted as a line.  That line had stretched to about 90 feet up to the FAD platform. 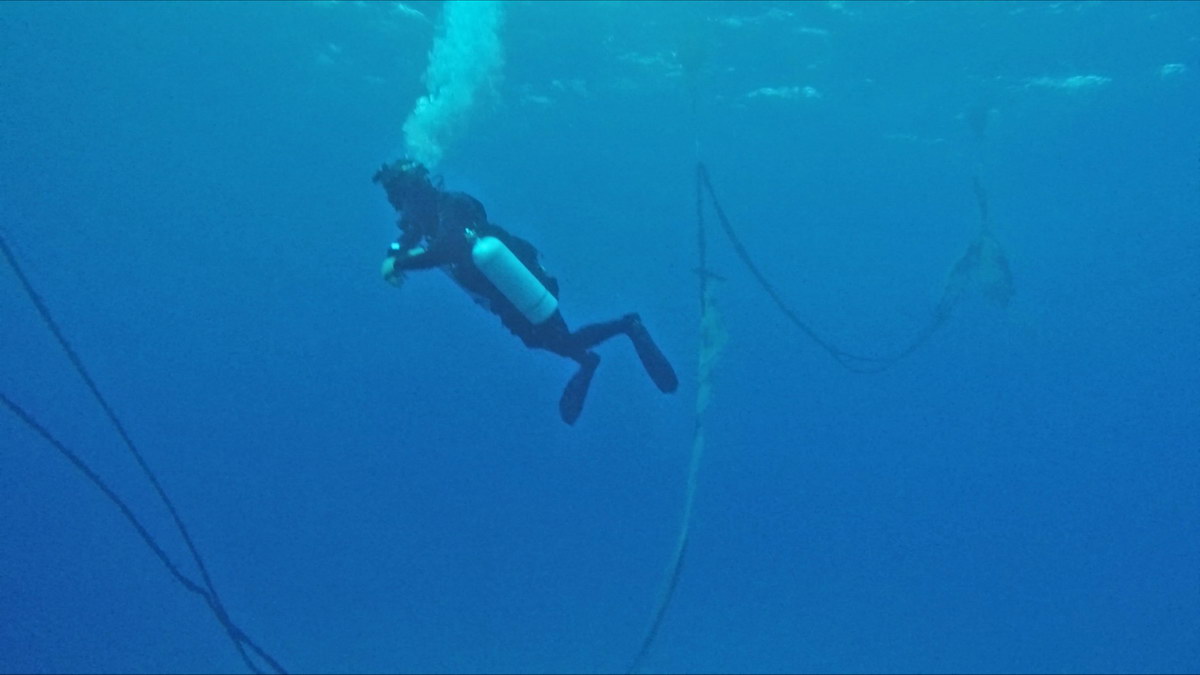 The line was wrapped around a rock outcropping which had several live coral heads that were getting pummeled by the line as it stretched and strained by the movement of the platform.

Ed and Glenn quickly went to work. They attached lift bags to several points along the anchor line, then slowly filled the bags with air.  After about 15 minutes they had that end of the line completely off the rocks and safely floating near the surface. 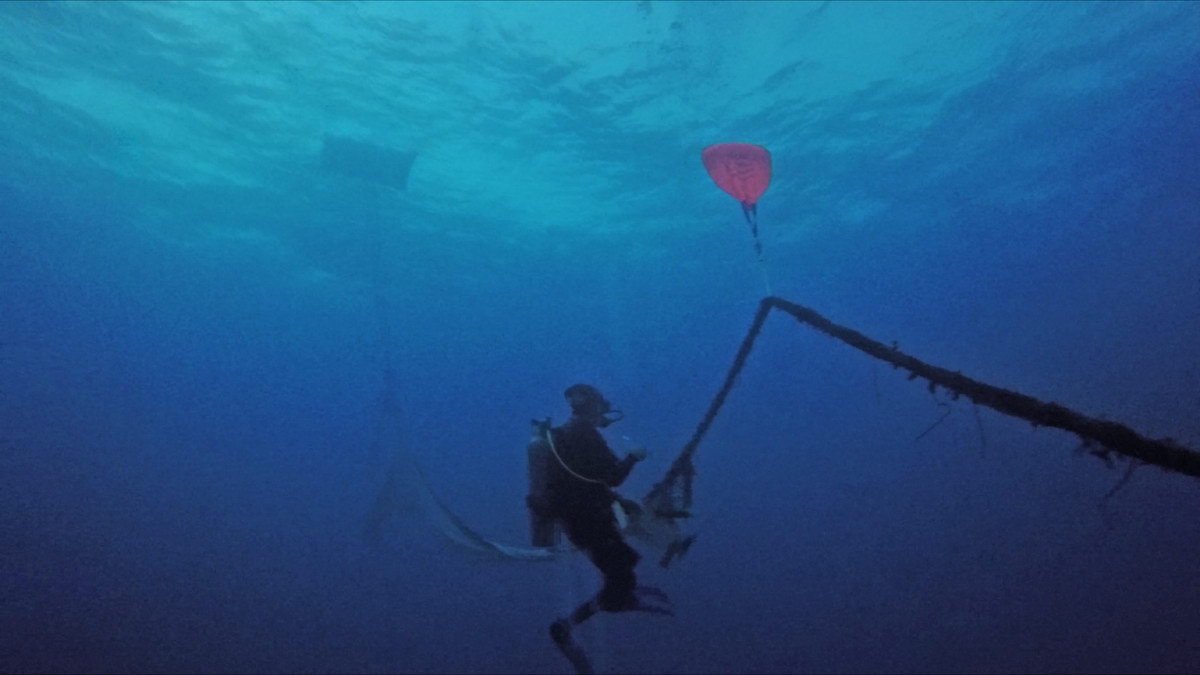 After doing their safety stop at 15 feet, Ken, Glenn, and Ed surfaced.  Tim maneuvered the boat within a close but safe proximity of them and shut the engine down. 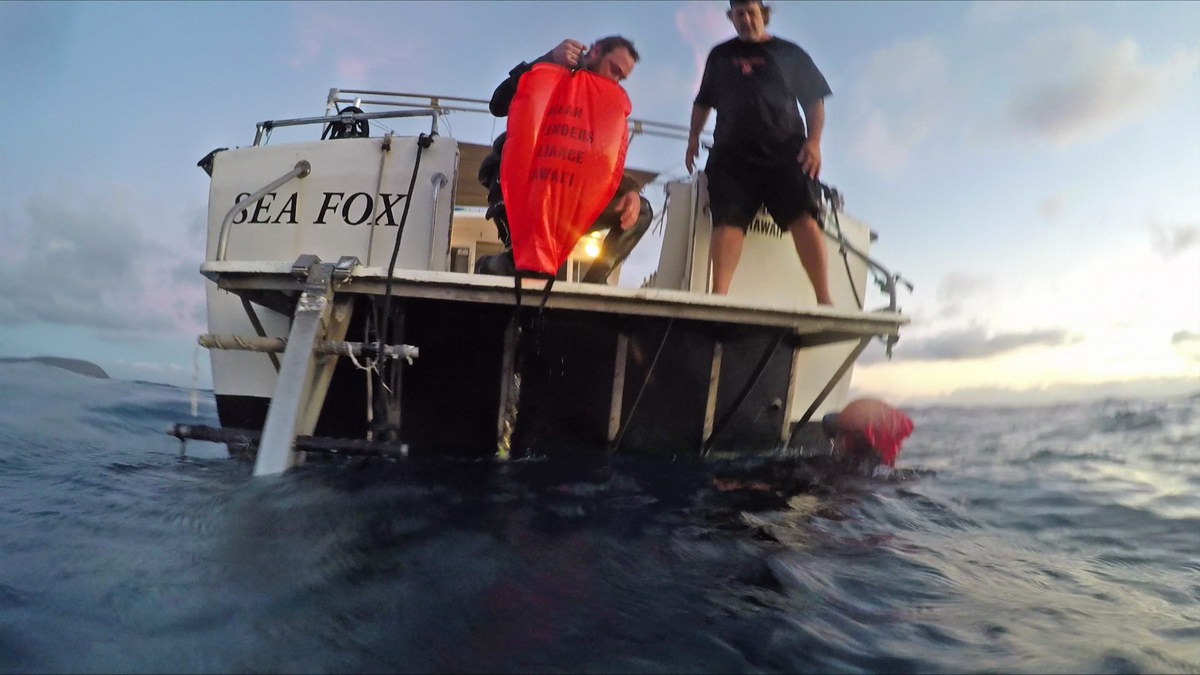 Ed climbed onboard to help Tim wrestle sections of the FAD onto the rear deck as Glenn pulled it towards the stern.  During this process, a lot of the line was getting caught in the propeller and the dive ladder.

Glenn had to untangle all that while somebody hauled in the dive ladder.  Phew! 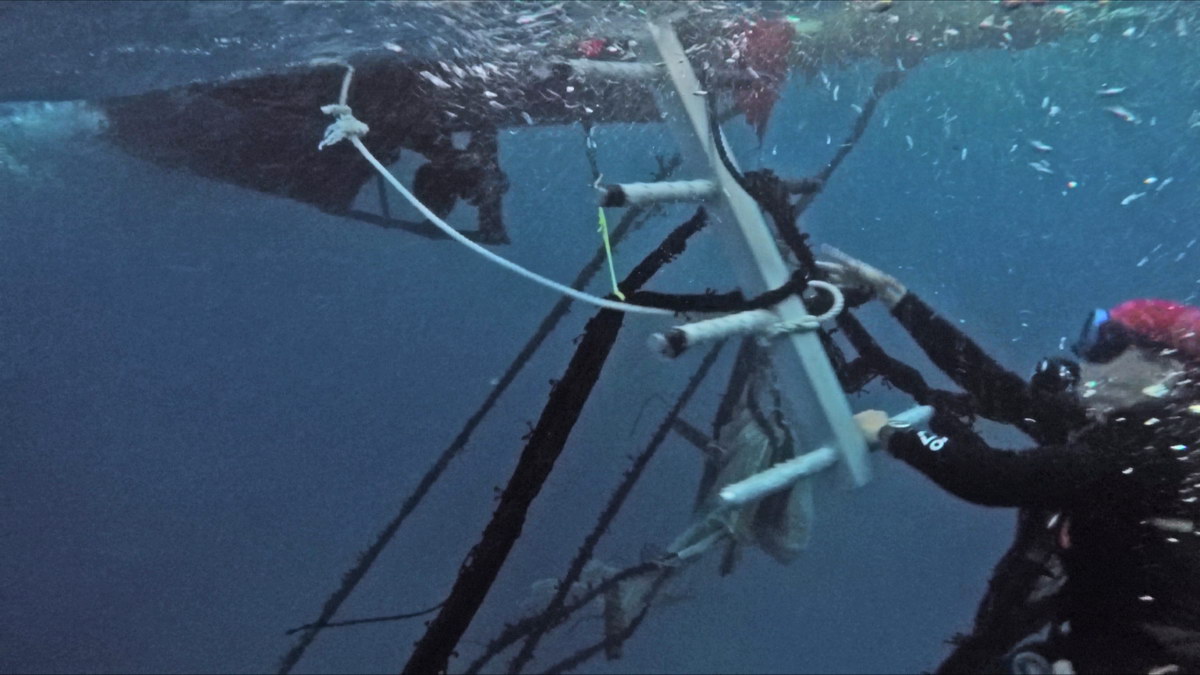 Now it was a clear shot getting the entire FAD on the boat.  No minor feat giving that it weighed about 700 pounds! 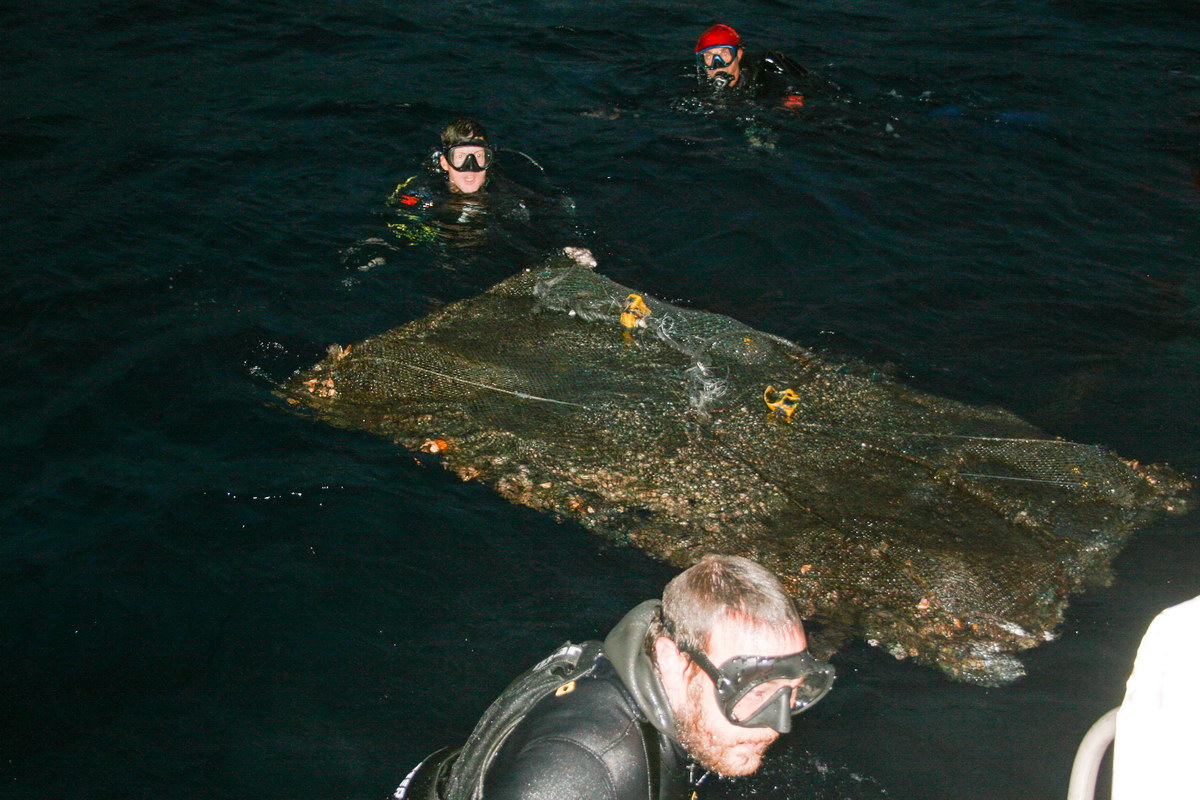 It was totally dark by the time they got back to the harbor.  But they made it, and the ocean critters can breathe a sigh of relief that that thing isn’t doing any more damage.  As you can see from this picture taken from the boat deck, there is NO way a boater would see this during the day, let alone at night. 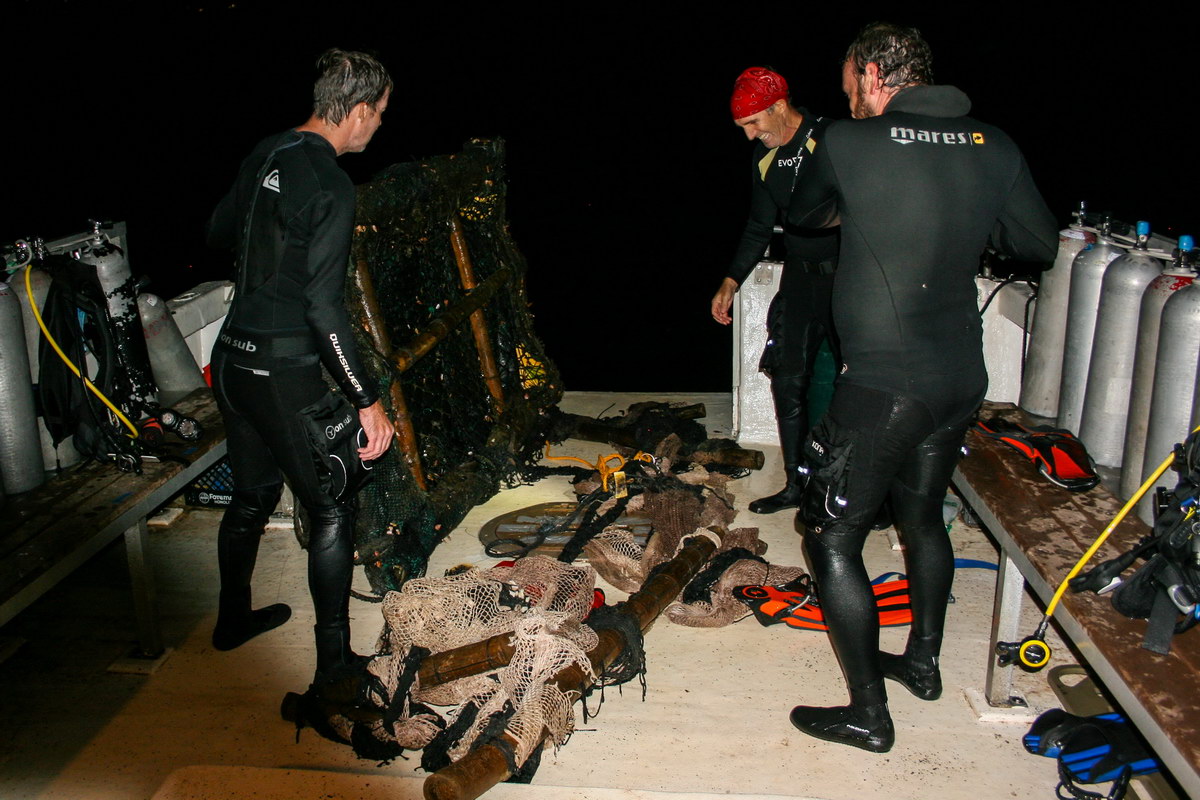 Once the FAD was onboard, we can wish everyone safe passage.

Thanks Matt, Ken, Glenn, Tim, and Ed.  You guys sure figured out a way to ring out 2020 on an uplifting note!

Be sure to check out the WHOLE story in pictures -- underwater, too. See our gallery below.