It’s been awhile since we’ve been able to get out on the water here in So Cal. 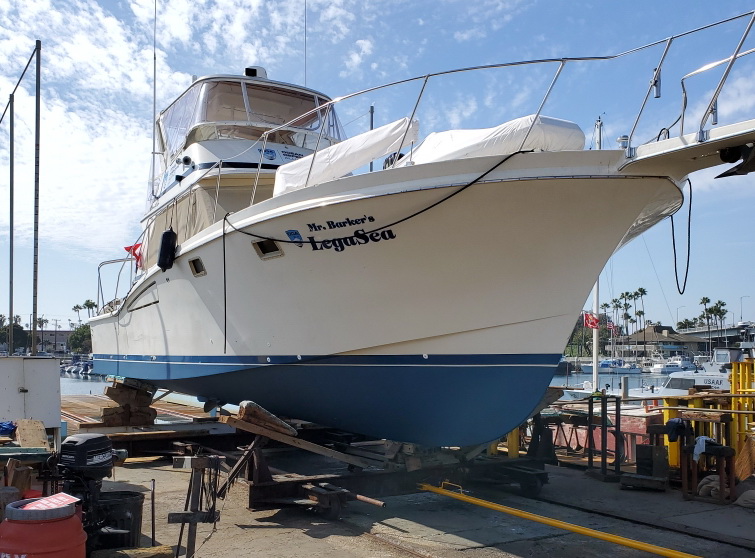 There were several reasons for that: winter storms, upgrades to our flagship LegaSea’s fuel system, and having the boat drydocked to get the bottom painted.

Now that all those issues are behind us, we had a group of volunteers all ready to go on Sunday, February 23rd.  Onboard were: Jeff Connor, Al Laubenstein, Rex Levi, Dave Merrill, Daryth Morrisey, Jen, Sue St. Sure, and Geoff Walsh. 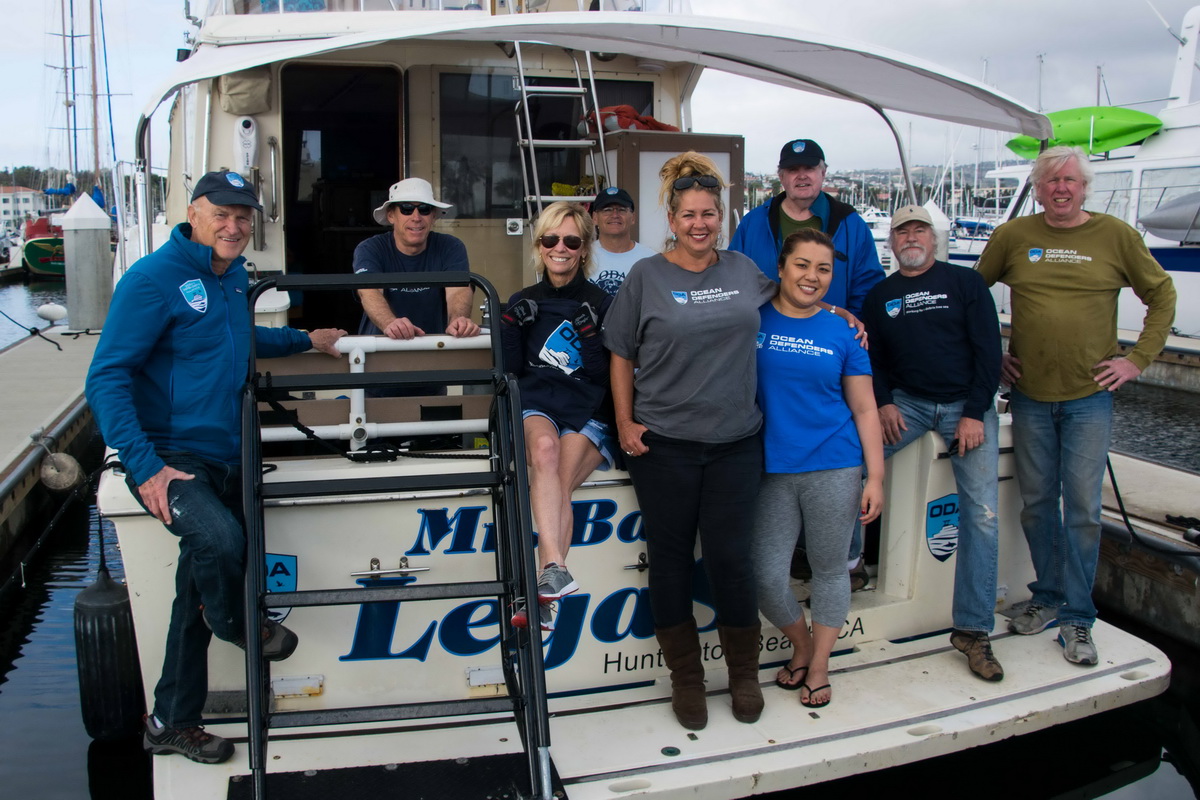 We headed out to a wreck site seven miles outside of Los Angeles Harbor.  But as we started approaching the dive site, we noticed that the boat wasn’t functioning normally.  When Jeff and Rex went down in the engine room, they saw an unusual amount of water in the bilge.  We couldn’t figure out where the water was coming from, so we headed back to our slip. 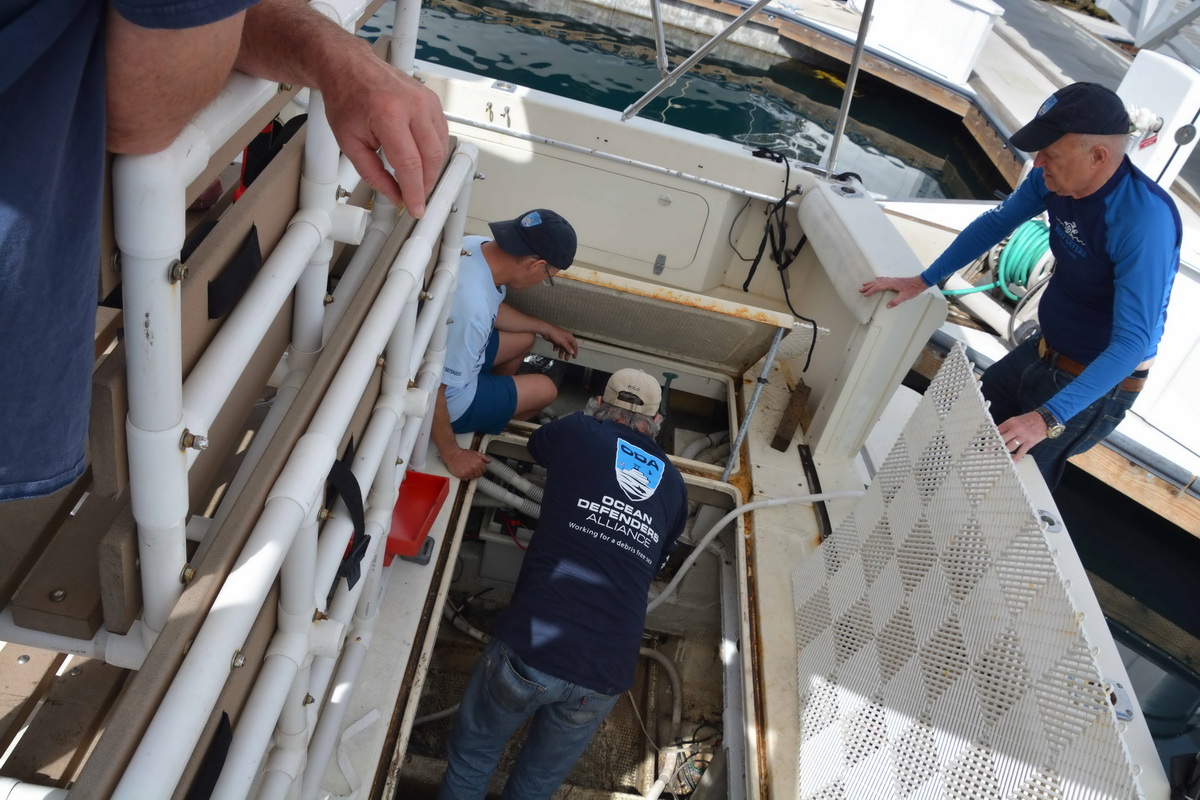 We spent the rest of the day trying to figure out the source of the water and did some other maintenance while we were at it.  We had ideas about where it was leaking but couldn’t be certain, so I had some professionals go in and see what they found.  They determined that it was a broken water exhaust port.  They replaced it and we haven’t seen any water in the bilge since then, thank goodness!

So, on Saturday, February 29, we had four divers and four crew ready to give it another try.  The divers were: Al Laubenstein, Dave Merrill, Geoff Walsh, and Mike Wynd.  The crew were: Jeff Connor, Rex Levi, Sue St. Sure, and myself. 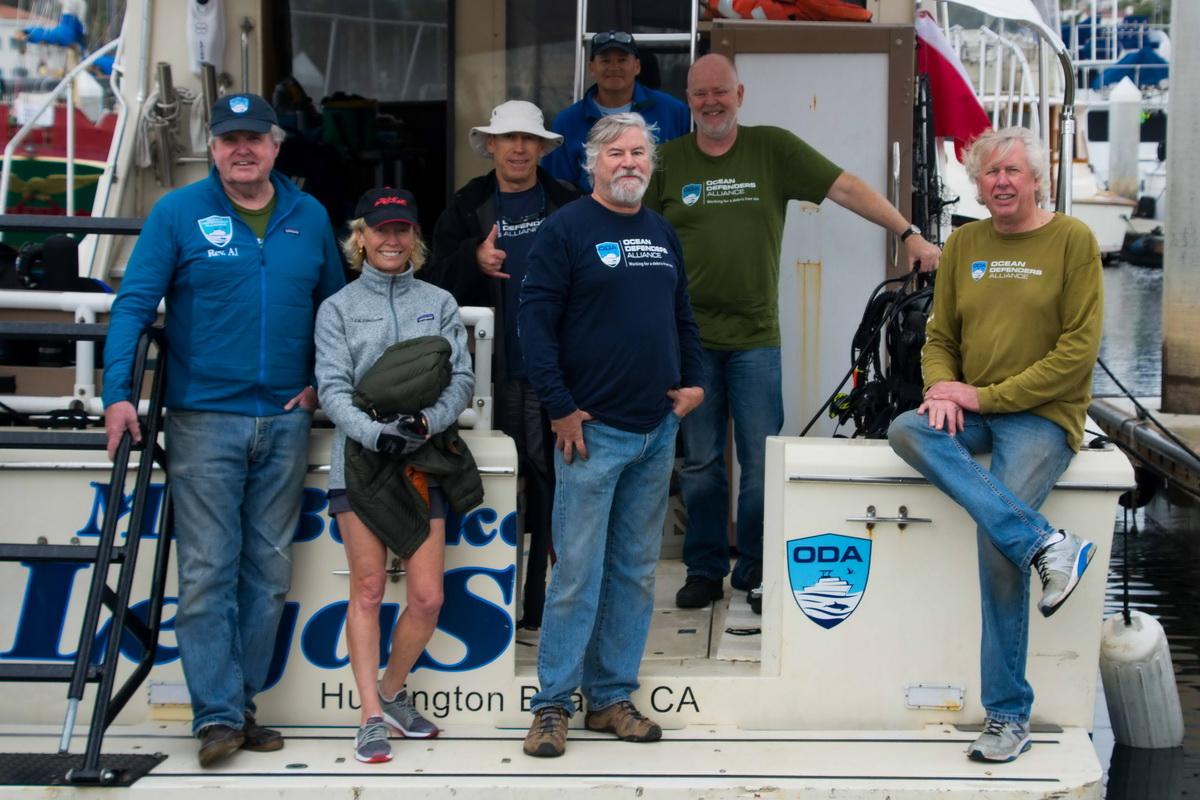 We were going to clean up the Los Angeles Harbor breakwall (a known collection site for abandoned lobster traps, but as we headed out of the harbor the ocean was filled with white caps and the waves were smashing in to the breakwall, so we decided to go to another site that would hopefully have better dive conditions.

We then went seven miles out to a boat wreck site that we hadn’t been to since 2008:  A fishing boat, about 60-feet long, called the Fog wreck.

Sunken vessels are “magnets” for abandoned fishing gear, so we make it a habit to return to boat wreck sites to clear the debris off them.

The Fog wreck site is pretty deep at approximately 100 feet. That means the divers wouldn’t have much time to work down there because of the depth…except we had an ace in the hole this time: Mike Wynd.  Mike uses a rebreather system that allows him to stay down for hours at that depth. In the photographs on this page, you’ll see Mike in his very technical-looking, bright orange dive suit. 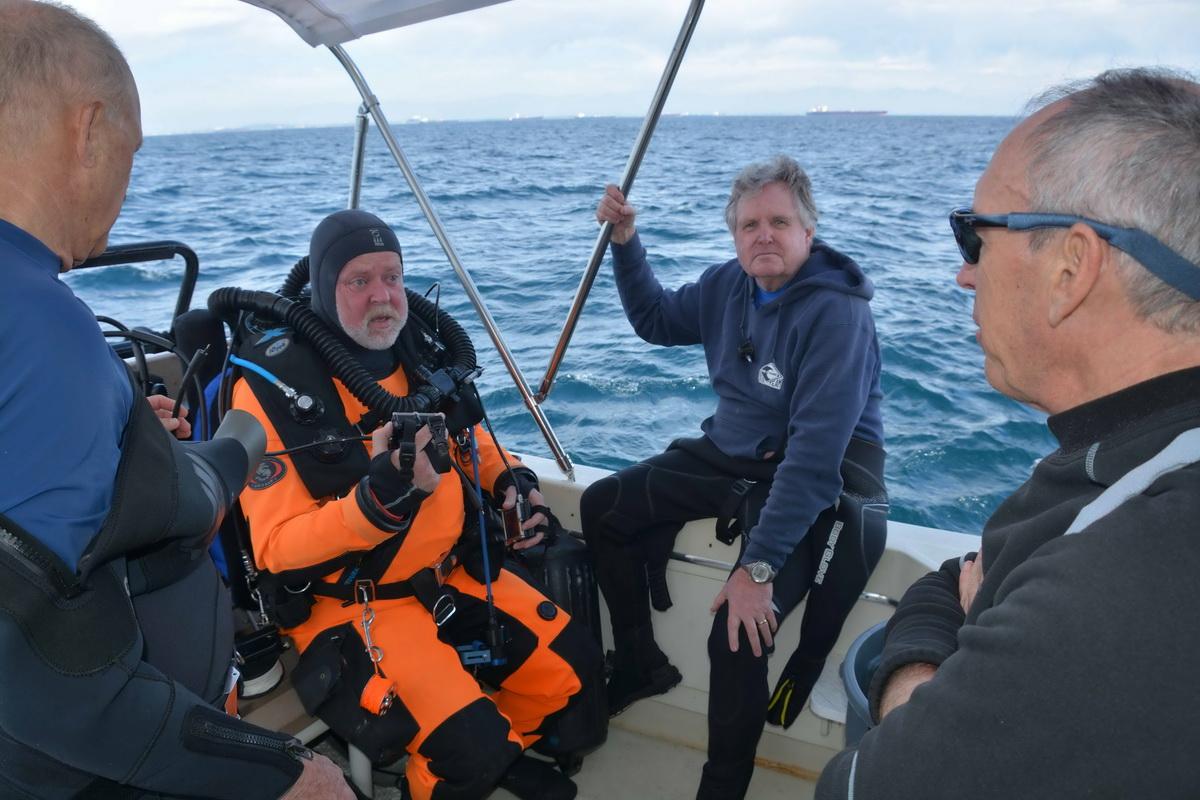 So, Mike jumped in first and headed down the anchor chain to make sure that I had dropped the anchor close to the wreck. 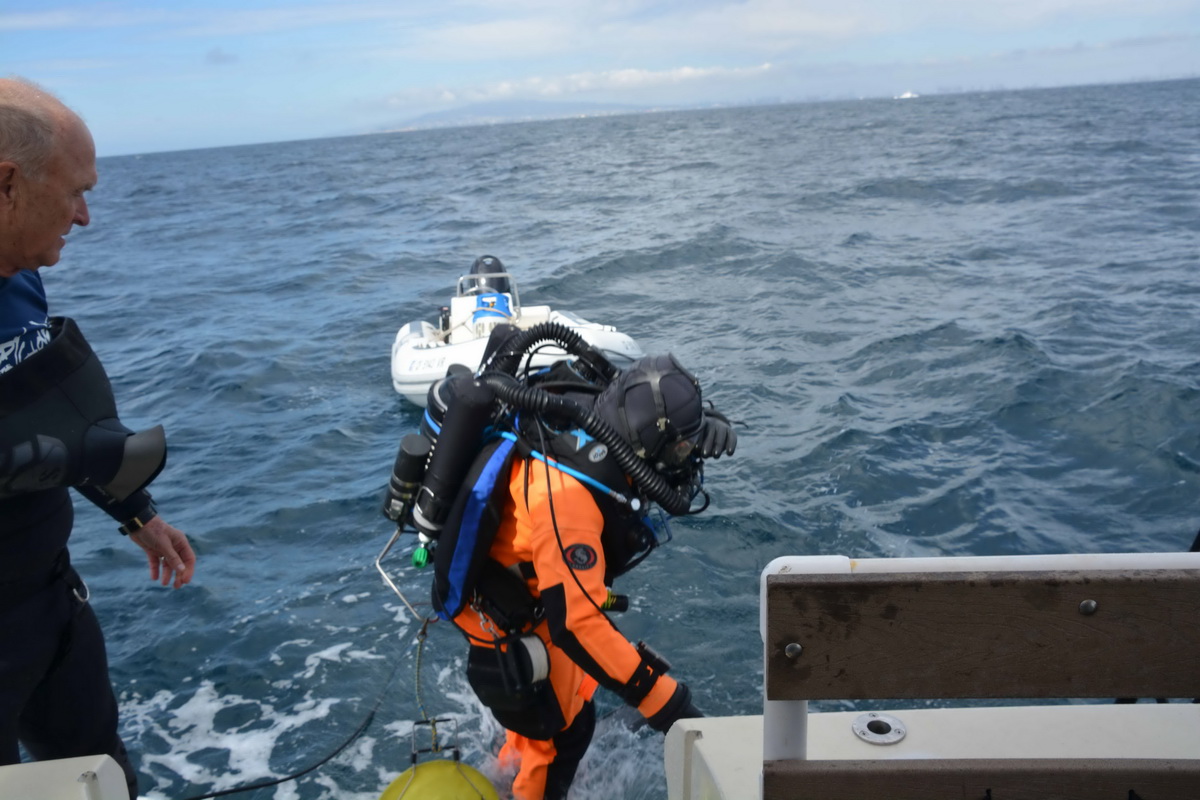 Once he got to the anchor, he saw that it was just 20 feet from the wreck.  He sent up a marker to let us know that he had found the site.

Al, Dave, and Geoff then jumped in and headed down to meet Mike.

Usually we start seeing lift bags come to the surface shortly after the divers reach the bottom, but we didn’t see anything this time…

Maybe the site didn’t have any fishing gear on it?  Al, Dave, and Geoff surfaced about 25 minutes later and said that they didn’t see much to remove other than some fishing line, and they had about 100 feet of it in their pockets.  Not much to brag about, but it really is good news that not much was caught on the wreck. 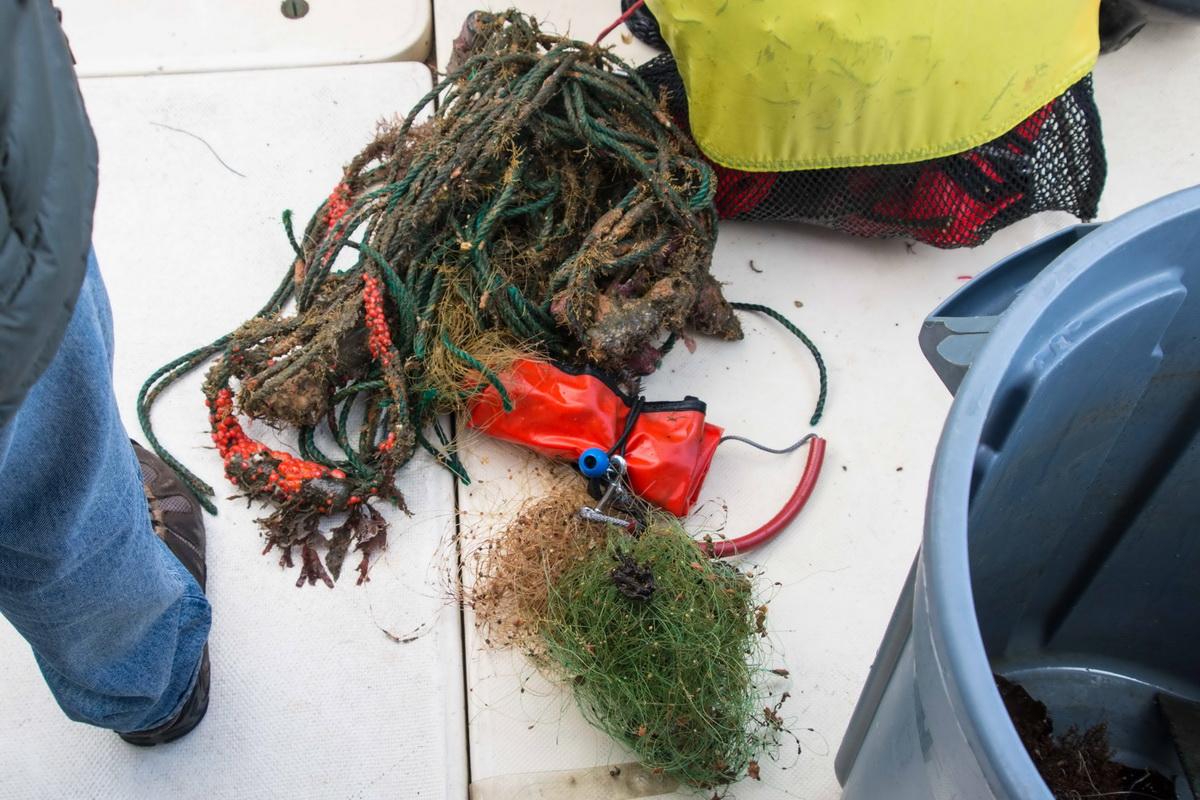 Debris Collected, Above and Below

While we were all talking about what they had seen at the wreck, we spotted some mylar balloons floating nearby.  Rex and Sue immediately jumped in the RIB (rigid inflatable boat) and retrieved them.  Each one had HAPPY VALENTINES DAY written on them.  Happy for whom?  Certainly NOT the animals that might get injured or killed by ingesting them. 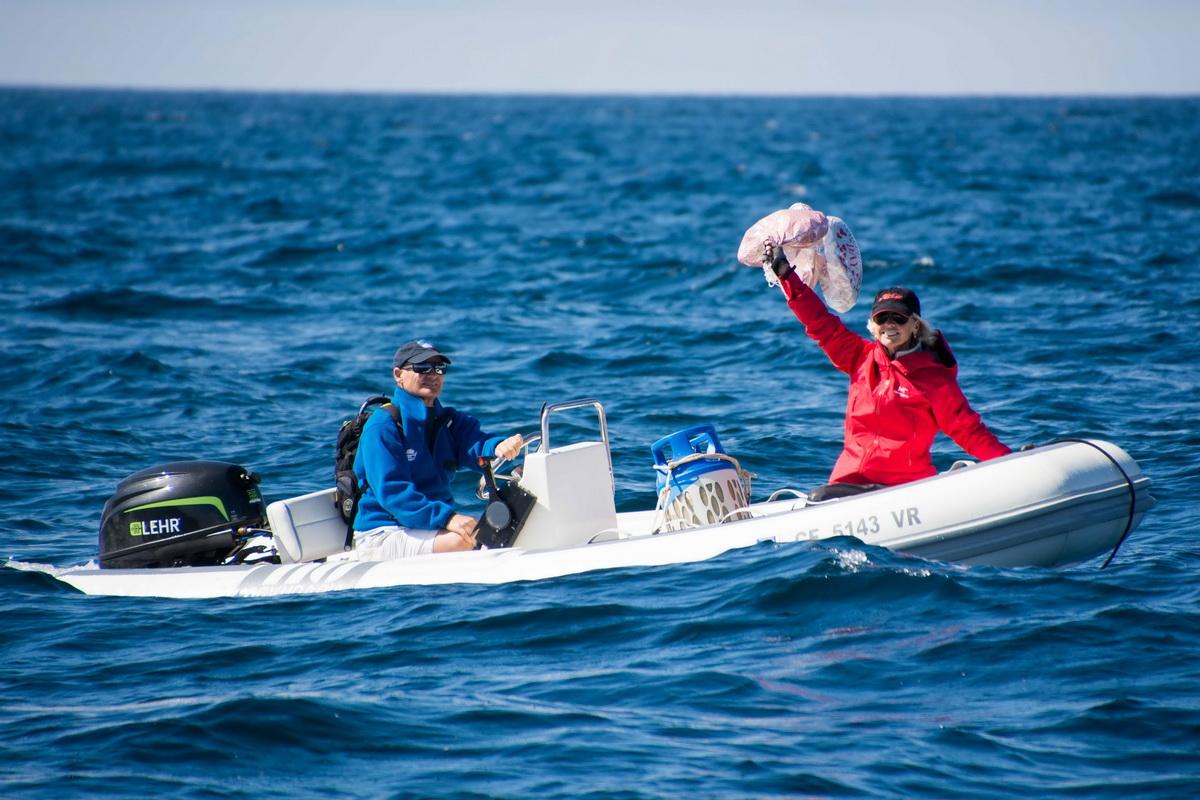 About an hour after he had gone down, Mike came back with a mesh bag full of nets.  Most of it was gill net, the kind that is REALLY devastating to marine life because it is so thin that the animals can’t see it to avoid getting entangled in it.

In all, it didn’t weigh much, about 50 pounds, but gill nets don’t weigh much because it is so thin.  The real problem is that it would cover a large area despite its light weight. 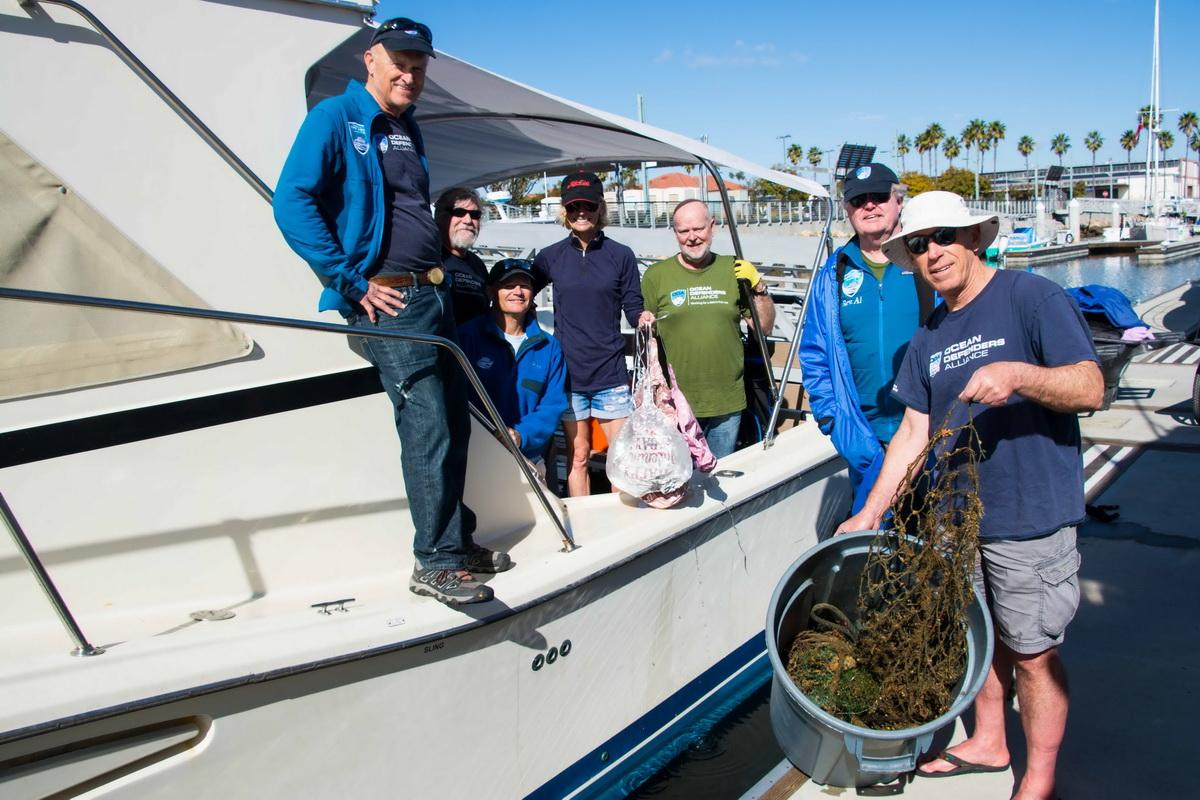 By then the seas had calmed down and we had a nice ride back.

When we got inside that harbor, we saw a whale not far off.  Rex and Sue scrambled into the RIB to see if they could get a closer look and get some pictures.  They kept a respectable distance and got a shot of it which we share here with you. 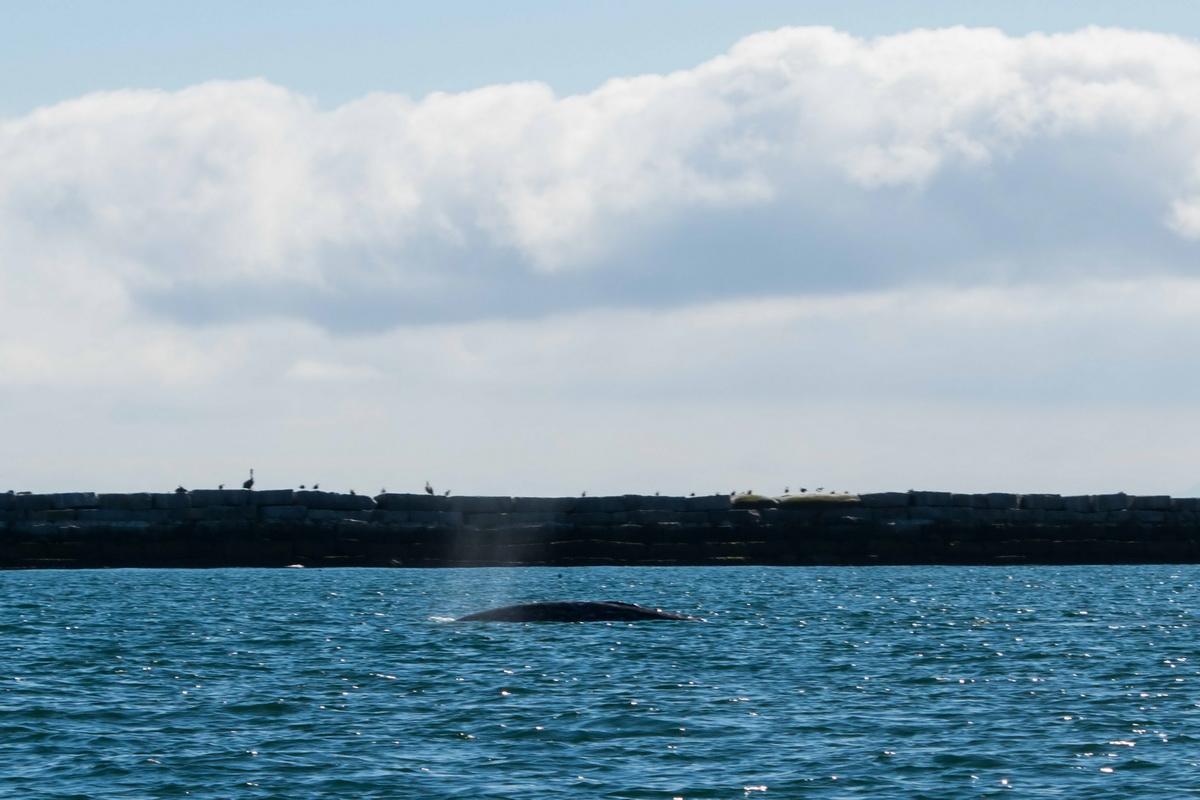 It felt great to be back in action and it showed on everyone’s face.  Both boats ran great and we are well situated to perform regular debris-removal outings this Spring.

The fishing season for lobsters ends in two weeks, so we'll start locating and removing abandoned lobster traps at that time.  After the specified legal trap-setting time ends, any traps left in the water are fair game for us to remove.

Thanks to our all-volunteer crew and our ocean-concerned donors, we will be out again shortly! I'll leave you with one more beautiful wildlife photograph of this great blue heron, and then after that, please see ALL the photos by clicking on the slide show below. 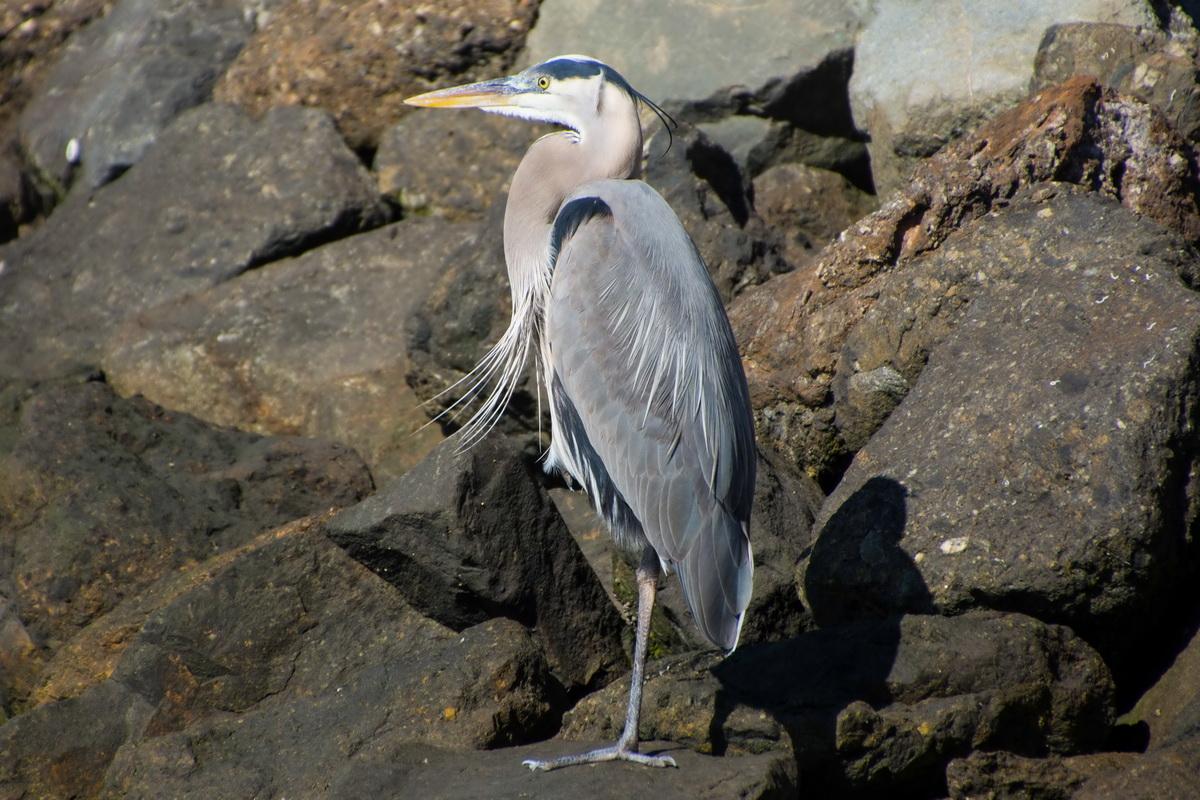