On Saturday, January 25th, ODA volunteers once again descended on Honokohau Harbor.  This was to be our 6th effort to remove marine debris from this world-renowned scuba diving and fishing port.  It lies about 10 miles outside of Kona, on the Big Island of Hawai’i. 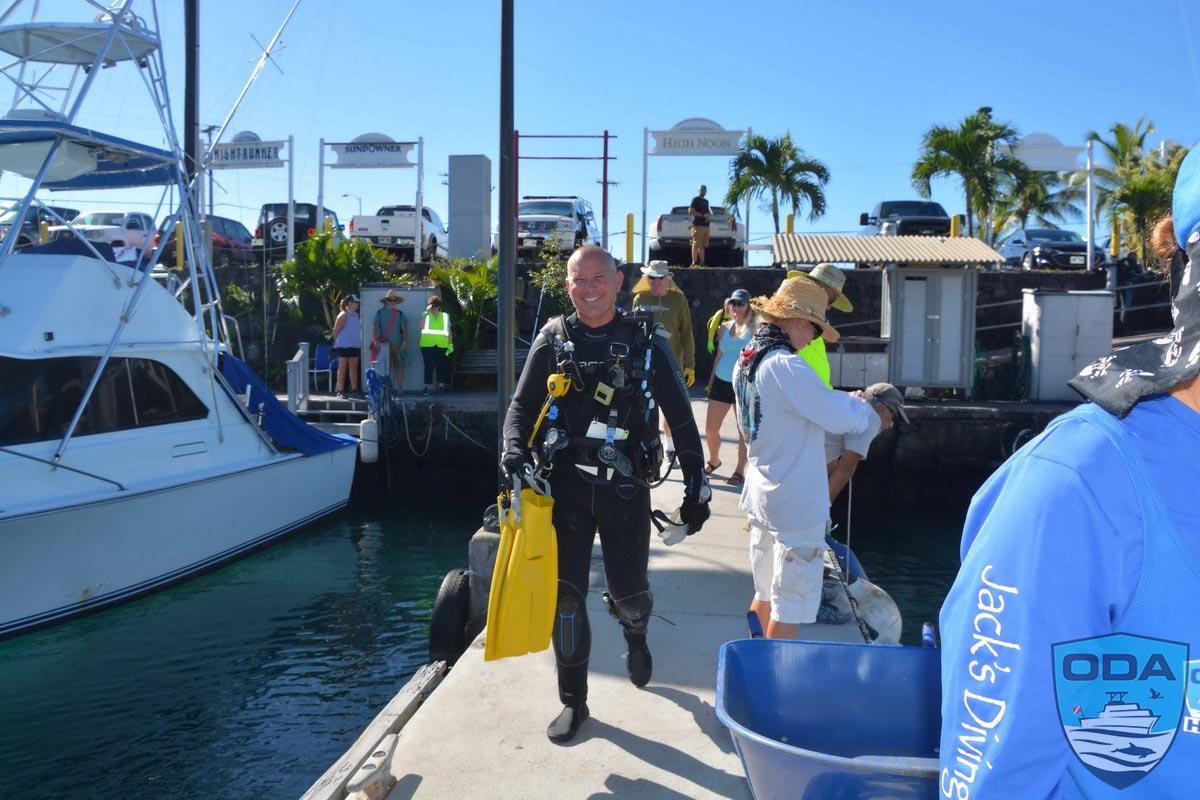 We’ve been doing these cleanups in collaboration with the wonderful people at Jack’s Diving Locker.  Owners Jeff and Teri Leichter have been kind enough to help us recruit divers that hear about these cleanups via posters that they put up in their stores, and by using their website and social media to get the word out.  The participation in these events has grown each time we do it.

The first time we did a harbor cleanup here, we had about 18 people show up.  The last time out, in August of last year, roughly 30 folks showed up.  This time we were expecting a modest increase as well, but were completely overwhelmed when over 45 eager volunteers arrived!

It was really interesting to hear how people knew about this event and where they came from.  Two guys from Arizona had read about it on Facebook, and thought, “Hey, this sounds like a good reason/excuse to go dive Hawai’i.”  They’ve been involved in lake cleanups with their dive club and were pumped that the visibility was so much better than the 2-3 foot range they usually get in their freshwater dives. 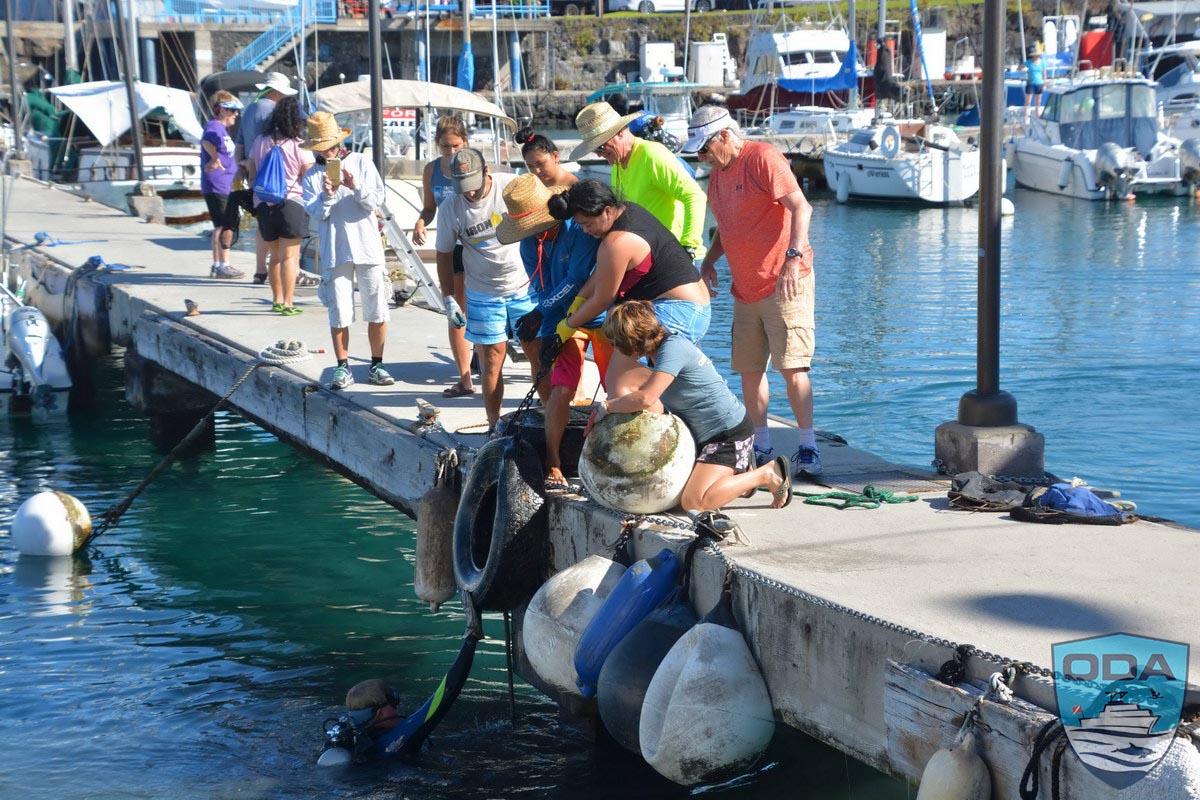 Another group of four had heard about it via social media the day before, and came all the way from Hilo, about 2 hours away on the other side of the island.  When I asked one of them (Channel) why they came, she said it was their Mother’s birthday and they thought she would appreciate her kids remembering her by helping to clean up the place they all love. Two other divers came all the way over from Hilo too.

Another delight for me was seeing a young lady there with her scuba gear in hand.  Her name is Manami Alspach.  She had attended a cleanup we did in Kawaihae Harbor last August, and she helped by being part of the deck crew.  She had talked her Mother into driving her there and it was great to get to know her and hear how much she loves the oceans and all its inhabitants, too.  She was 14 years old at the time.  Turns out her father, Tim, is a Dive Master and has been tutoring her in all things scuba since she first started to swim.  She is now 15, and is the youngest diver we have ever had! 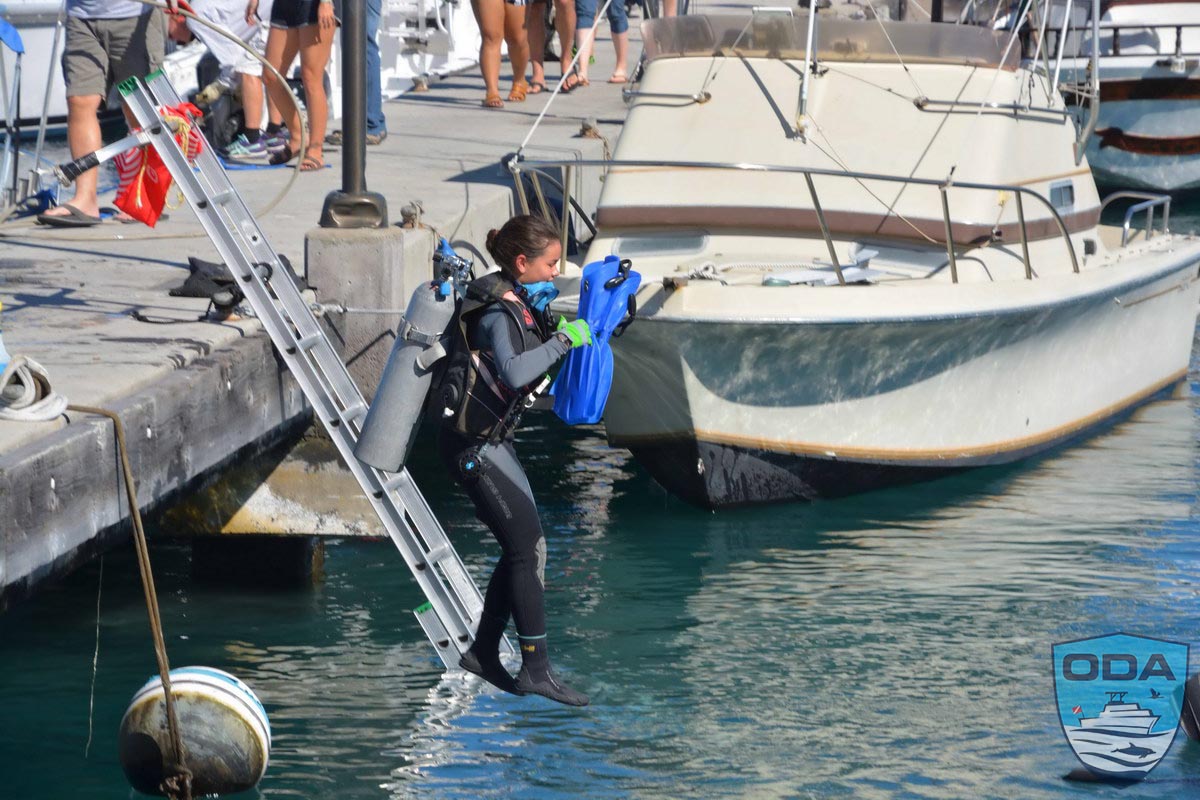 One of the goals of ODA is to pass our reverence for the oceans on to the next generation of young people.  To see Manami with her sweet smile and scuba gear, well, it just made my day.

Around 9:30 everyone had gathered around our staging area and I gave a brief orientation as to how the deck crew would work with the scuba divers to coordinate the removal of all the things the divers were going to find.  It’s hard to know from the dock what the divers are doing underwater, so we’ve come up with a system for the divers to let the topside help know when and where they need ropes to attach to the debris. 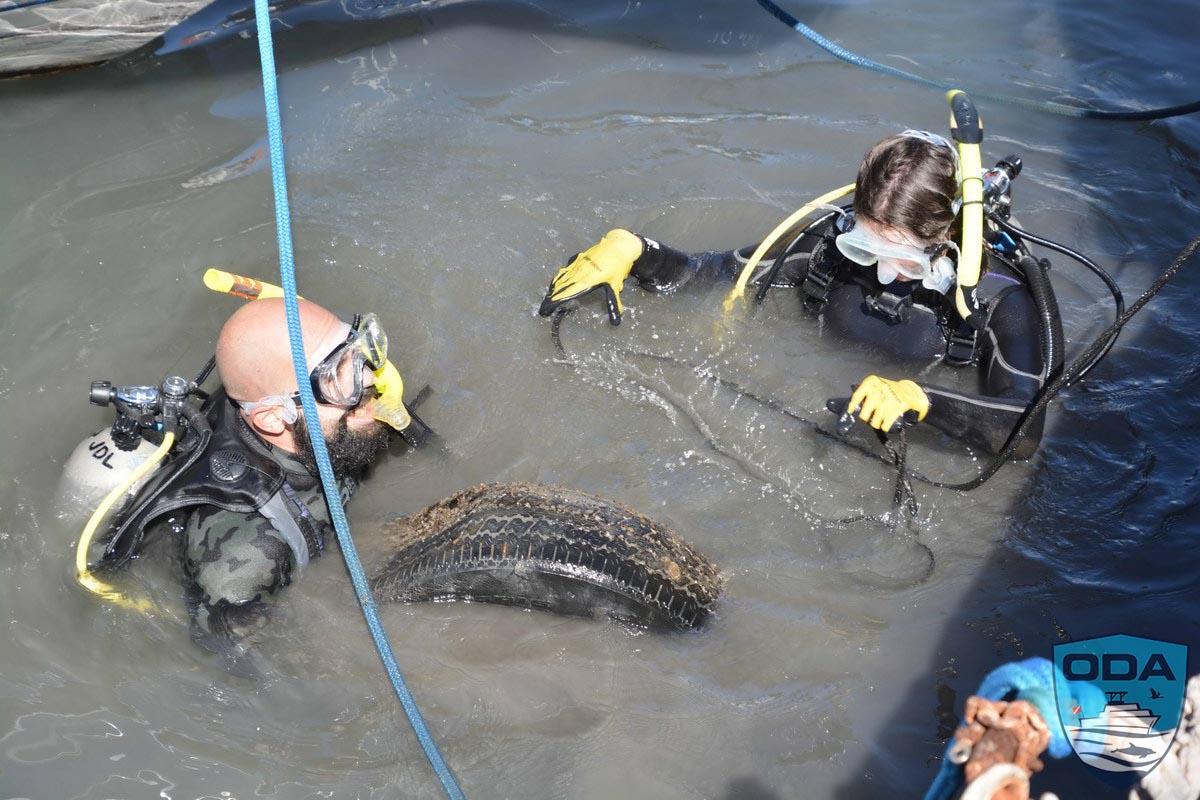 By 10 o’clock the divers started to jump into the water, and within minutes they had attached lines to some of the debris and the crew started hauling the items up.  This is when things got chaotic and continued that way for the next two and a half hours.  We had all kinds of stuff coming up: tires, garden hoses, PVC pipes, anchors, hundreds of feet of dock lines, over 1000 feet of fishing lines, bottles, cans, plastic bags (one of which had a nice assortment of fingernail polish), some fishing nets, a tool box filled with tools, a car battery, and some jugs filled with oil.

One of the divers, Jack Kent, found an eel who had recently died.  It was entangled in a small amount of fishing line -- further proof of the value of our cleanup efforts.  Usually a dead animal gets eaten by crabs, shrimp and fish within 2 days.  Because of the condition of this poor eel, it looked like he had just died that day.  Damn… 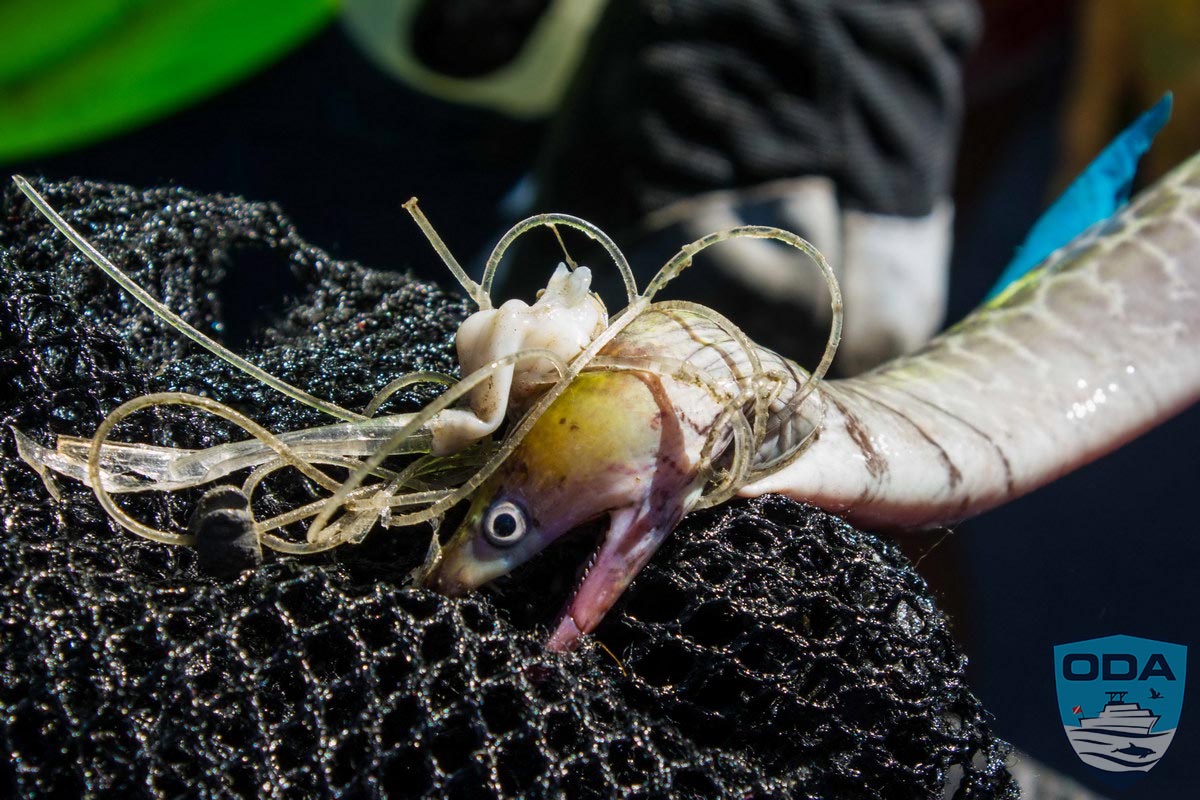 By noon we had to stop because the Harbor Master had told the boaters that we would be out by then.  And the boaters were appreciative of what we were doing, so we didn’t want to overstay our welcome.

In all, we removed roughly 2,000 pounds of marine debris of all sorts, plus 45 tires.  Most of them were car tires which are used to keep the boats from ramming into the wooded docks, damaging the boat hulls.  But a few of them were bigger and most likely came from large trucks.  One of them was huge and was probably a tractor tire.  It probably weighed 200 pounds!  Several the guys wrestled with that beast for ten minutes until they finally landed it on the dock.  Here you can see Teri and Katelynn rolling it up to the staging area. 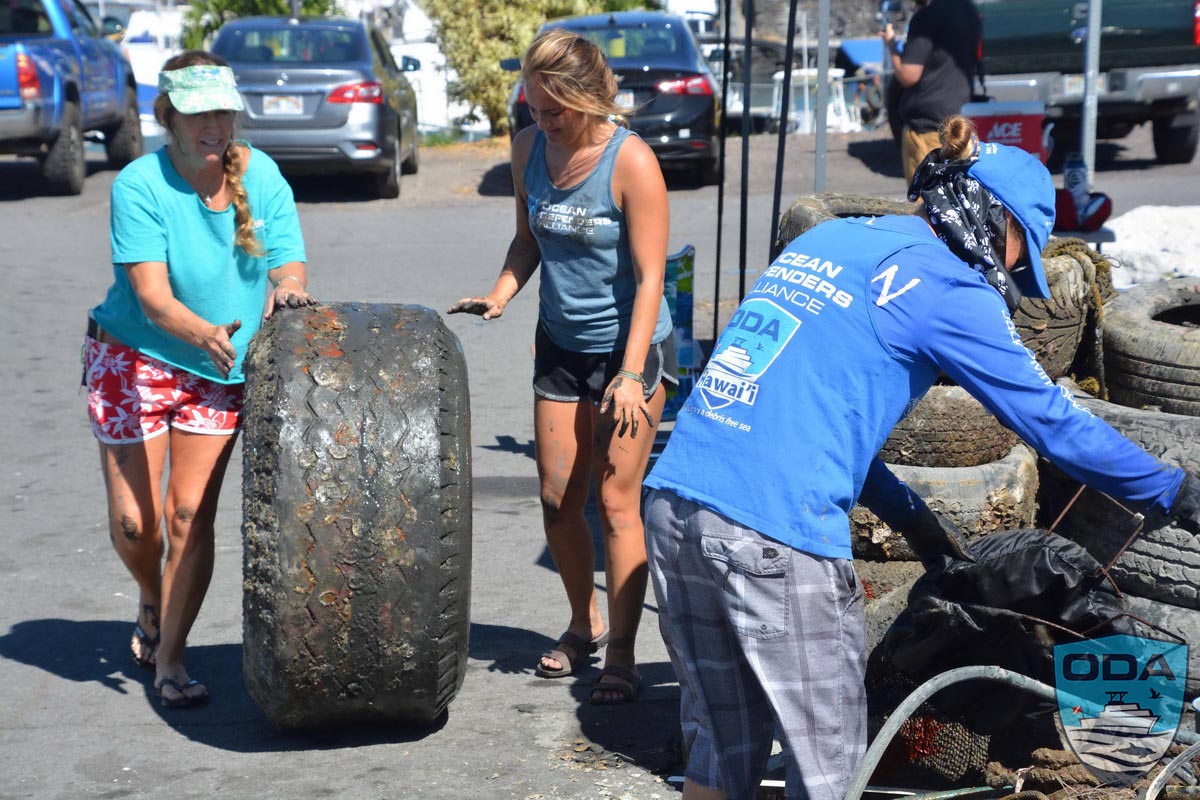 A few innovative ladies, seeing that we had enough help on the docks, took the initiative and removed 2 huge bags of litter from the surrounding parking lots and dock areas.

After we put all the debris in one spot, we posed for some group shots then threw all the debris in to the trash bins.  The use of the bins was donated by Superior Sanitation.  A special Mahalo to Alison Keith, who works for them, for helping to facilitate that donation. 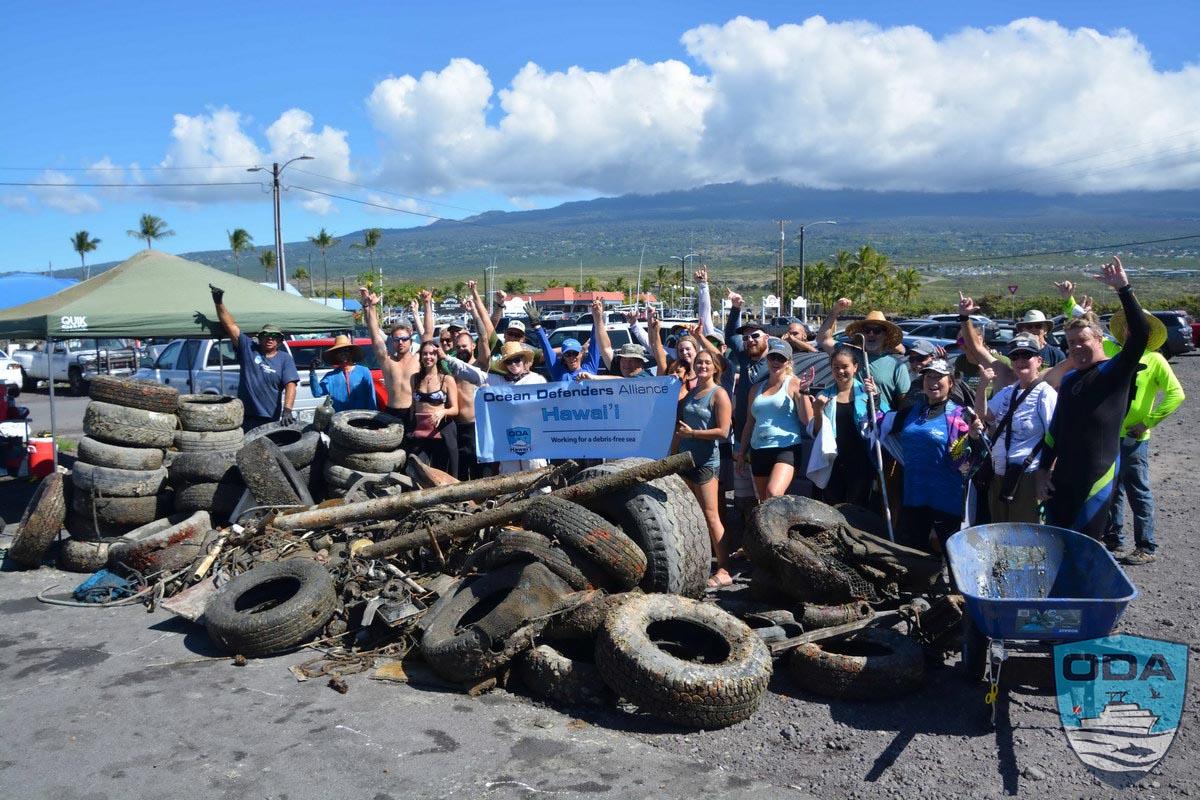 Before heading off into the rest of the beautiful Hawaiian day, we cleaned up the docks by hosing off all the mud and junk that invariably get left behind as we removed debris from the harbor.

The docks looked just as if nothing had happened, and I felt the floor of the harbor letting loose a sigh of relief as 5,300 pounds of debris will pollute the harbor no more. 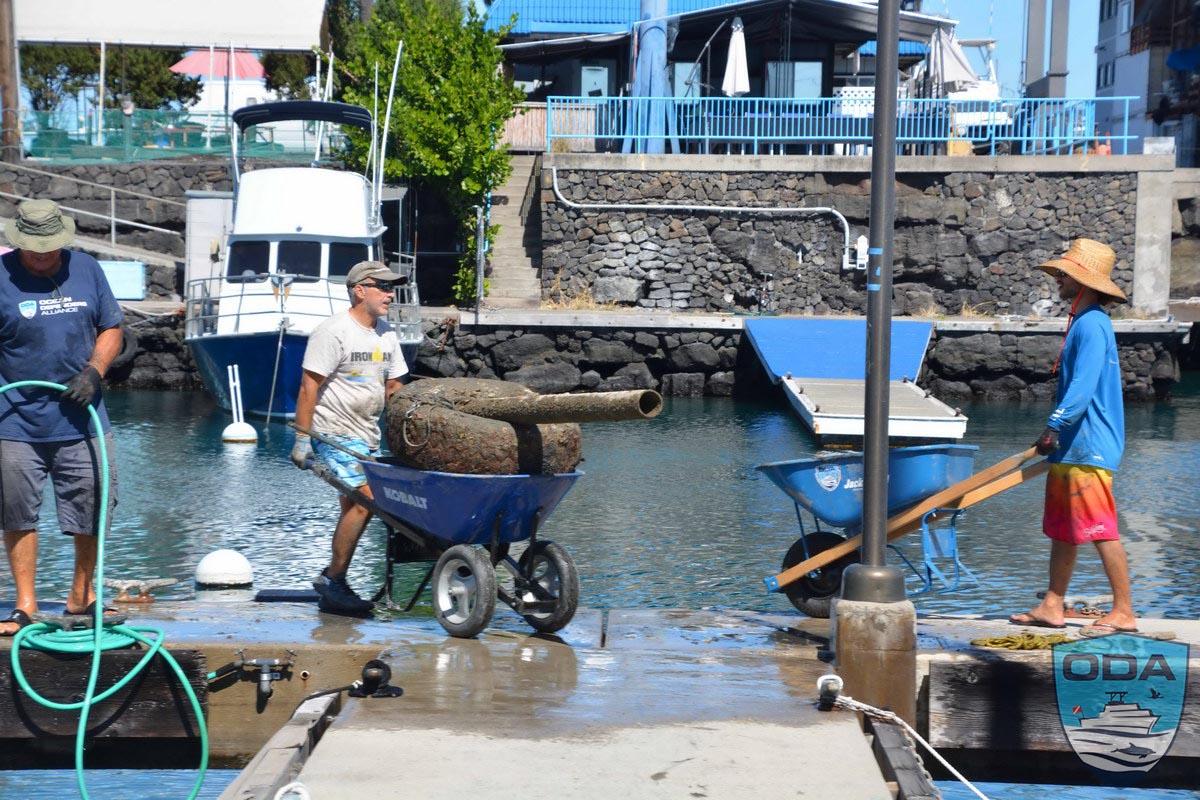 Mahalo Nui to everyone who helped out for this momentous day!