If you can’t take the heat, get out of the kitchen?

Just when you thought our lives couldn’t get any worse, with Covid severely curtailing our health and social lives, BAM… a historic heat wave arrives.

We were planning on continuing our 7-Mile Wall Crawl on Sunday, September 6th, but had to cancel at the last minute due to sweltering weather that blanketed the western states of the US.  The day before, Saturday, it was 93 degrees in the shade in San Pedro where our boat is located.  It was 121 degrees in Woodland Hills, a city I pass through on my way to the boat.  ONE HUNDRED & TWENTY-ONE DEGREES!

Recently, I received a call from Walter Marti, one of our long-time volunteers.  Turns out, a friend of his (Nanette) informed him that she’d found an abandoned fishing net during a dive outing.  She suggested that Walter let ODA know about it.  She then sent a 16-second video of the net.  It was a shocker to me when I saw a dead shark stuck in it.  Dang… 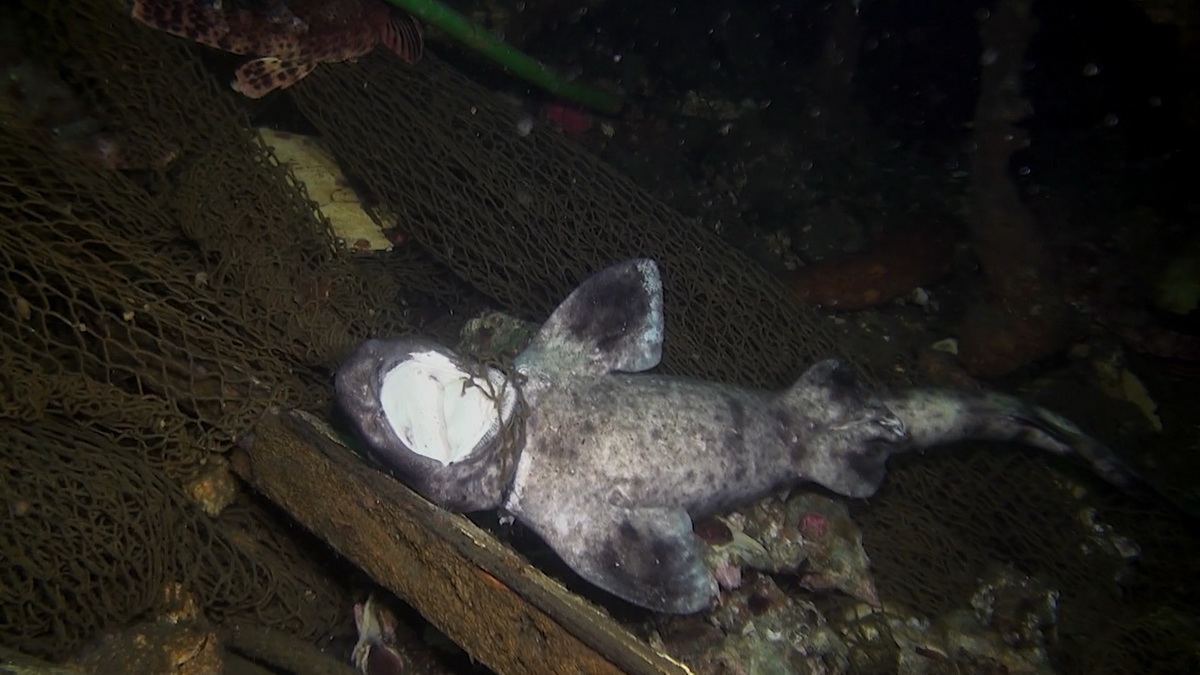 This is a still from Nanette's video showing the shark caught in net.

I immediately sent out an email to several of our volunteers, asking if they could go out ASAP.  We don’t want that thing killing any more animals if we can help it!  Within hours we had six people signed up to try to locate and remove the net.  We agreed to head out on Wednesday, September 9th.

The divers were: Kim Cardenas, Walter Marti, and Geoff Walsh.  Walter is an underwater (UW) videographer, and he gladly brought his video rig along to film the site.  On deck were: Jeff Connor, Dave Merrill, and me. 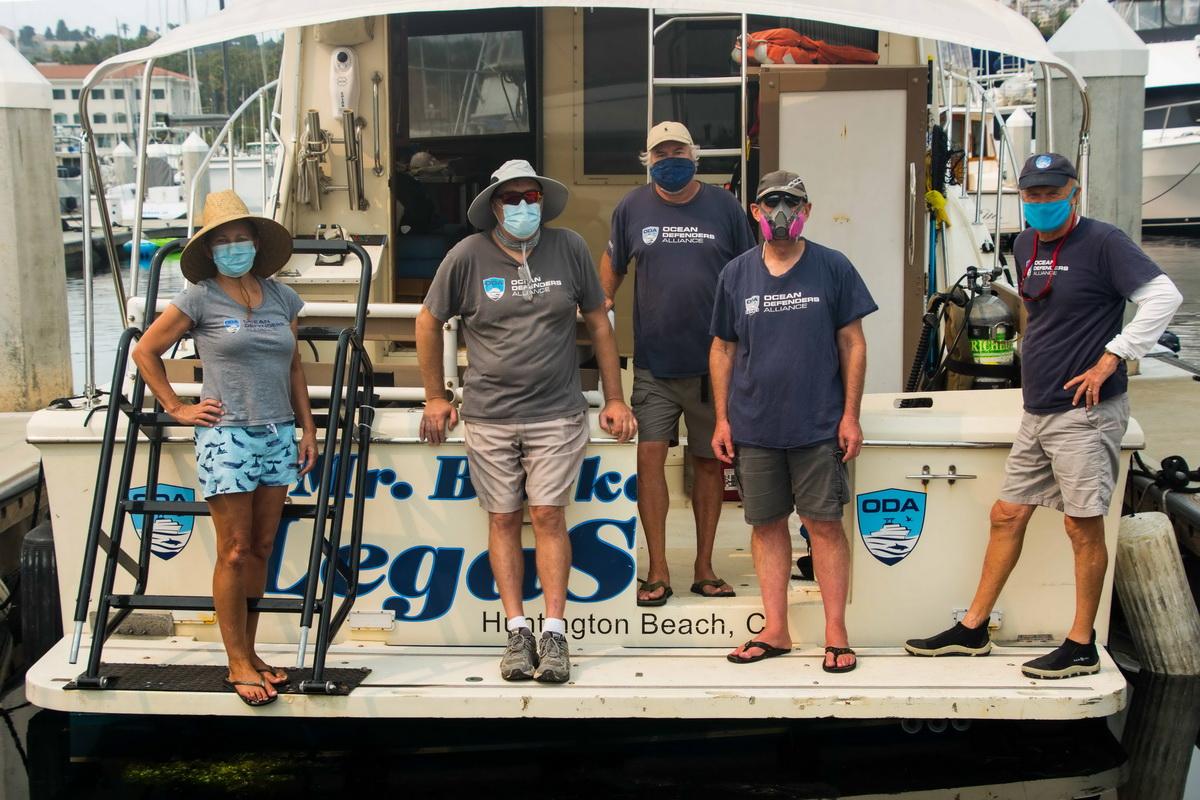 As we headed out of Los Angeles Harbor, there was a wall of fog blocking our vision.  It was so bad that even though I could hear the fog horn sounding, I couldn’t see the lighthouse, until it was 200 yards away.  We turned on our radar unit to make sure we wouldn’t run into anything.

We slowly made our way to the site as the fog got even worse, to the point that we couldn’t see more than 100 yards in front of us.  It took us about an hour to reach the site where we dropped the anchor in 80 feet of water.  As the divers got into their dive suits, the fog started to lift.  Phew! 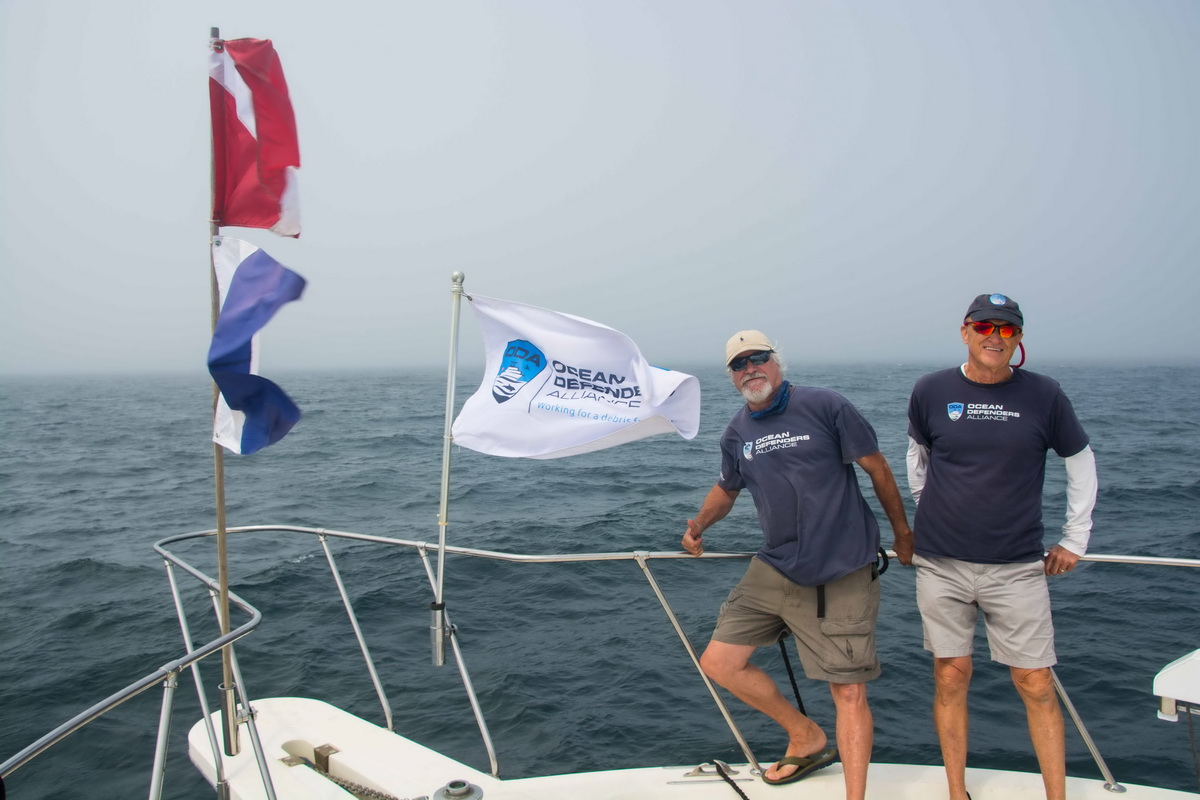 Jeff, Dave, and I made sure the anchor was staying in place before the divers descended and had to keep checking it because the wind was really howling, and the waves were getting bigger as the day wore on.

Walter jumped in first so he could start filming the site before Kim and Geoff got to work removing the net.  The UW visibility was really good at 20 – 25 feet, so he was able to get some nice footage of what the site looked like.  A few minutes later Kim and Geoff joined Walter and started to scan the site for the net with the dead shark. 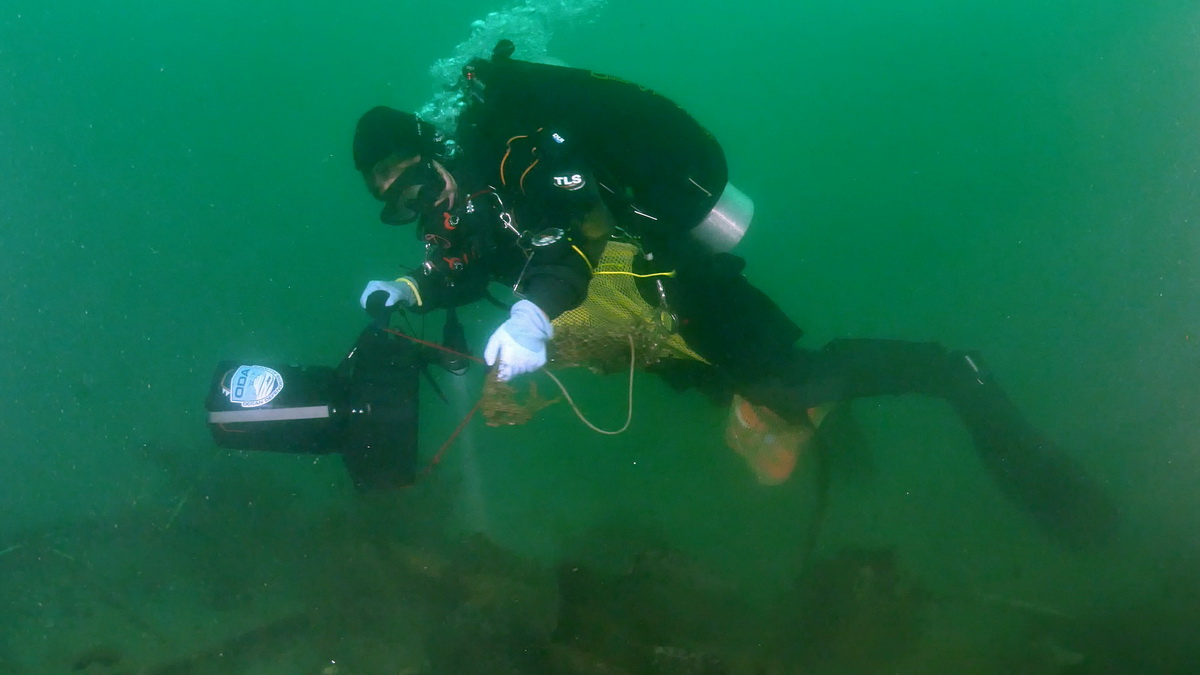 Only to find that it wasn’t there… Oh joy.

They all swam around the site and couldn’t find anything looking remotely like the net in the video that Nanette had sent us.  So, they started removing some small pieces of net that they did find and sent those to the surface. 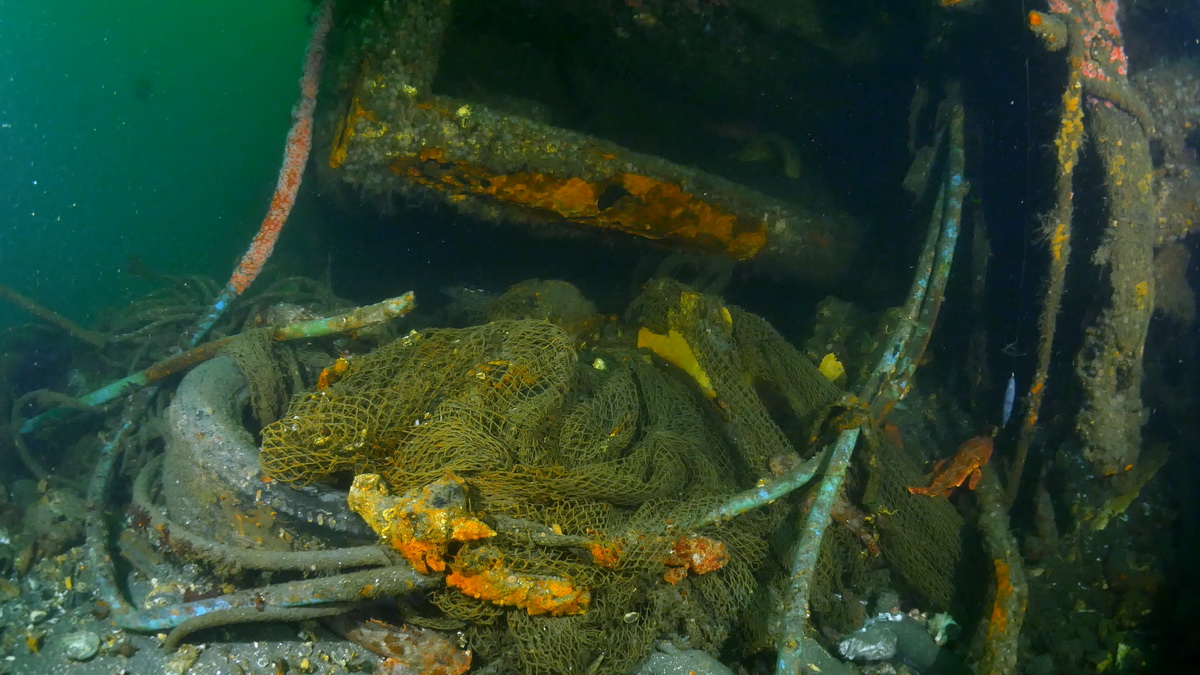 Below you can see the net being sent to the surface. The divers attach an inflatable lift bag to the debris, fill it with air, and it pulls the derelict fishing gear to the surface. 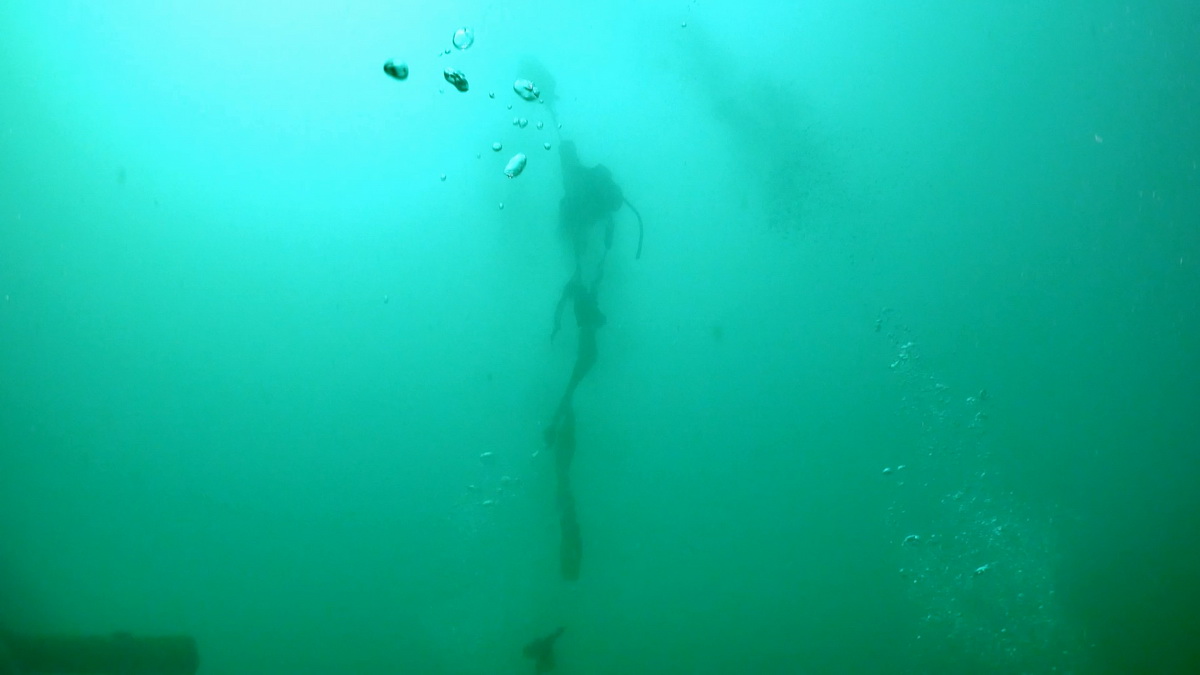 What happened to that big piece of net that we couldn't find?  Most likely some scavengers found that dead shark and started feeding on it.  Could have been some sea lions or other sharks.  While they were tearing into the flesh, they probably dragged the carcass, with the net, out away from the site and who knows where that all ended up…

Walter had a little bit of time to film some of the wildlife that call this site home.  Dozens of kelp bass, some sand bass, and one really large metridium. 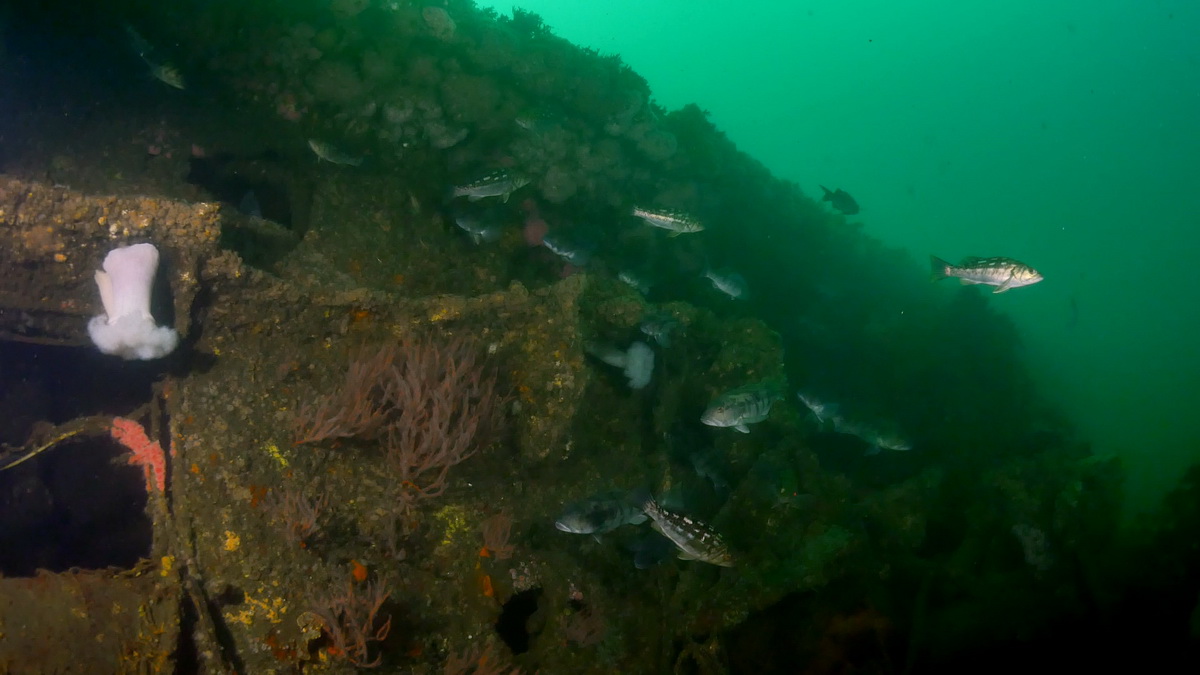 Metridiums are anemones and are white in color.  Some can get quite large, at 9-10 inches tall and with a bell roughly six inches in diameter.  They are filter feeders with the ability to “walk.”  They do that to find suitable habitat to snag their prey, usually in areas of high water flow.

Kim, Walter, and Geoff did two dives and removed about 25 pounds of net.  Not what we were hoping for, but at least no animals will get caught in that stuff.  AND we got out of the kitchen!

Help us get out of the kitchen more often...and get out on the boat to find more of these roaming predatory ghost nets! Your donation will help keep our boat in ship-shape and full of fuel - thank you!