Hauling and stalling in the Channel Islands National Marine Sanctuary 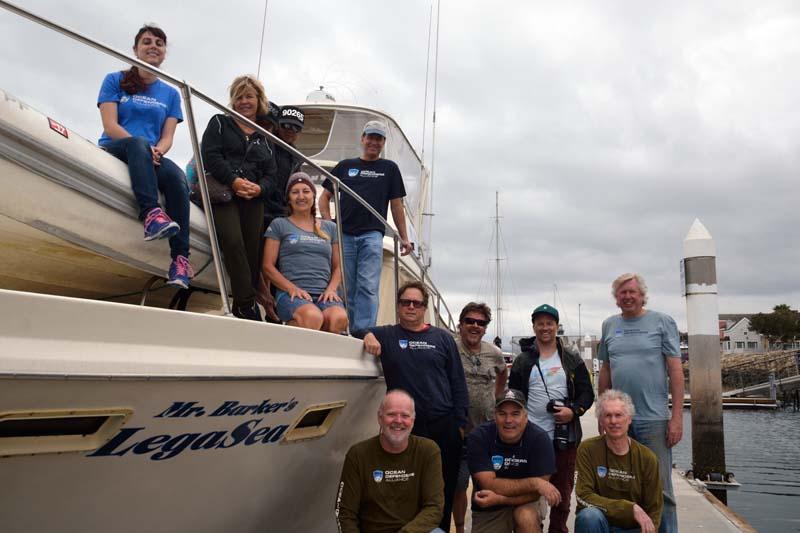 Crew before departureOn Sunday, June 12th, we headed out of Channel Islands Harbor (Oxnard, CA) to see about fulfilling Mr. (Bob) Barker’s LegaSea; of course we did this on our our conservation vessel of the same name.

As soon as we pushed past the harbor breakwall, I could tell we were going to have excellent conditions for motoring out to Anacapa Island.  Seas were flat, and even though there was thick cloud cover, the clouds were up at 3,000 feet or so.  We could not only see Anacapa in its entirety, we could also see Santa Cruz Island from one end to the other.  Wow, what a remarkable scene!

Though we’ve cleaned other locations in the Channel Islands chain, this was our first time back at Anacapa in 2 years.  We headed to the far west end of the island to a place called Wash Rocks.  We’ve removed many abandoned lobster traps here in the past, so we thought we’d go have a look.

As Kim Cardenas, Danny Graham, Dan Eisenbeisz, Bill Maley, and Mike Wynd got into their dive gear, we anchored about 200 feet away from the island.  It was nice and calm, so we launched the rigid inflatable boat (RIB). 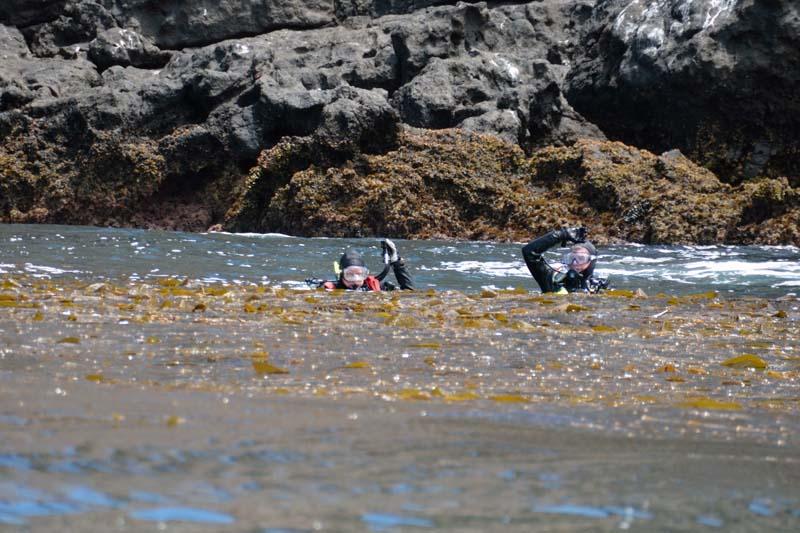 Dan and Bill in the water 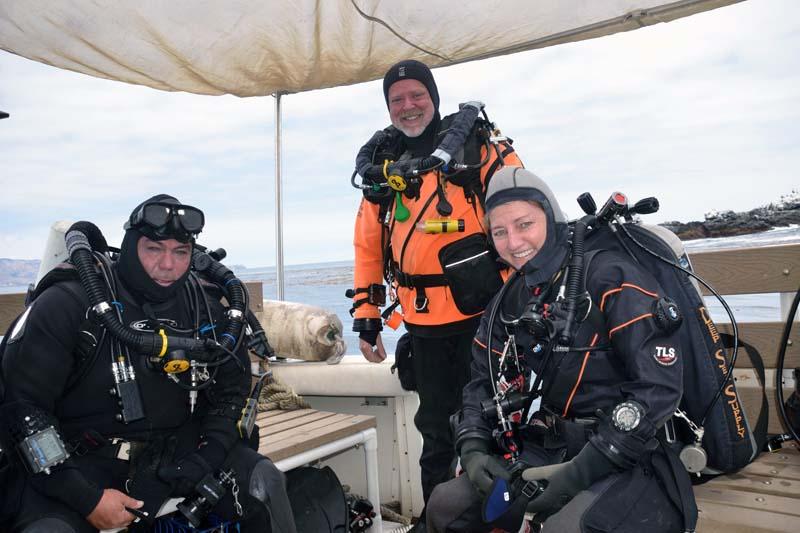 Danny, Mke and Kim suiting up

The deck crew consisted of Jim Lieber (first mate), Brooke LaDoucuer, and myself.  Also onboard were a team of reporters and a photographer from THE LOCAL: Jennifer Wiser, Keith Larsen (photos), Cece Woods, and Steve Woods.  The LOCAL is a newspaper that is published twice a month, and is based in Malibu, CA.  They also have an online version of the paper where they’ve written about ODA in the past. You can see one such recent article here:

Great, passionate, smart people to hang out with.  But then again, so are ALL ODA people!

Kim, Danny, and Mike formed a dive team, with Bill and Dan forming another.  Kim, Danny, and Mike used underwater scooters to get themselves around, so they were able to cover a lot of the ocean floor quickly.  They found 2 traps and some trap remnants and sent them to the surface on lift bags, where Jim and the RIB team quickly retrieved them before they drifted off in the current.

After about an hour we had all the divers back onboard.  Then we moved over to a spot about a mile away called Cat Rock.  We had been on this site about 3 years ago and removed a big section of deadly ghost net, but we had to leave some behind due to fast currents making it unsafe for the divers. 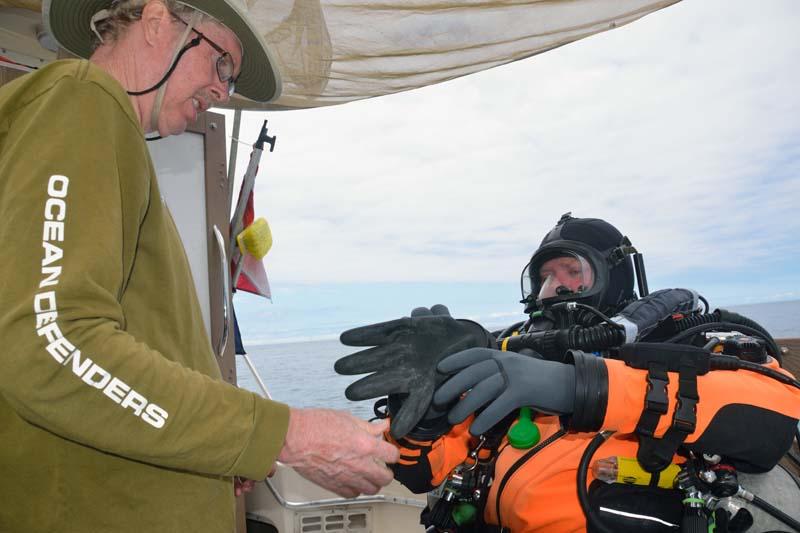 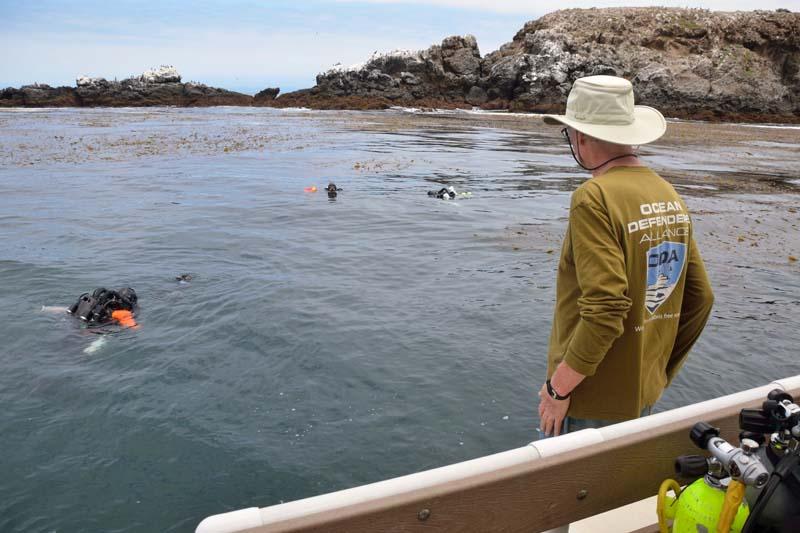 Divers in the water

For this dive just Danny and Mike dropped down into the clear cold water.  While they didn’t see any of the net that we’d seen before, they did find some trap remnants and sent that to the surface.  When they got back to the boat, I could see the current was just howling.  They held onto the rear dive platform and their legs were strait out behind them.  They were holding on and looked like leaves in a tornado!

We got them back onboard, but when I tried to pull the anchor up, it was stuck.  Mike volunteered to go down and set it free.  After 10 minutes he surfaced and we were on our way back home.

On the return trip we saw a lot of dolphins.  They were feeding on some small fish, with pelicans and seagulls joining in on the feast.  It was a long day and as we approached the Channel Islands Harbor, the sun was setting and then the engines both died.  Dang it! The fuel filters had become clogged with debris from the fuel tanks, for the 3rd time, despite our repeated cleaning of the tanks and fuel system. 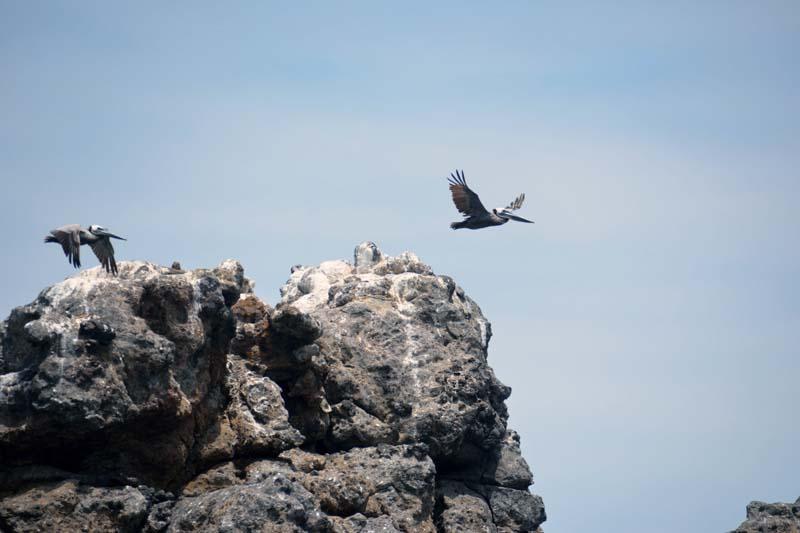 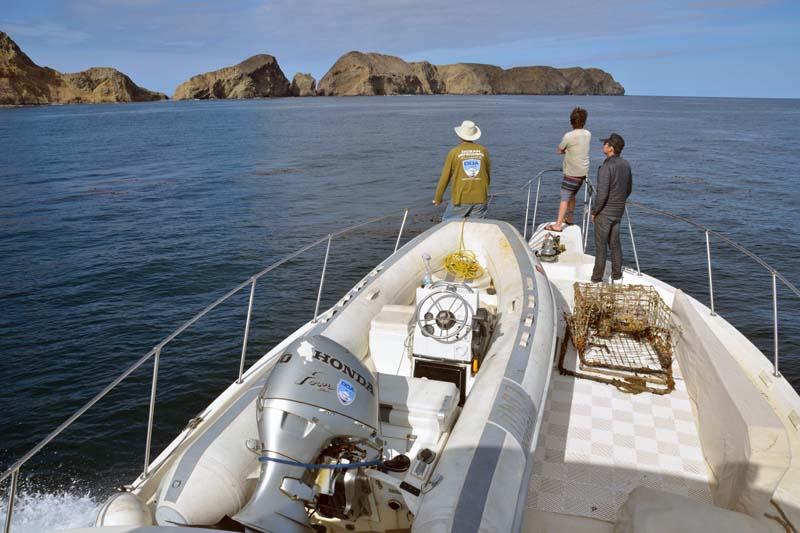 I am going to have the tanks cleaned out, again. This is just not normal!

So, I called a tow service to have us towed back in.  Even though we were less than a mile away from our slip, it took several hours for the tow boat to arrive…

A long day turned into a MUCH longer day.  Because of the high caliber of our wonderful ODA volunteers...no one other than me complained.  We were lucky that it was so calm, and as we watched the sun set we were surrounded by diving birds and little silvery fish jumping all around us.  It was a beautiful display of the critters we all (and this means YOU!) work so hard to save.

PS: You have a chance right now, by making a donation, to help ensure our boat is ready to serve—and that this fuel system repair happens quickly! We need to resolve this issue once and for all; will you help?