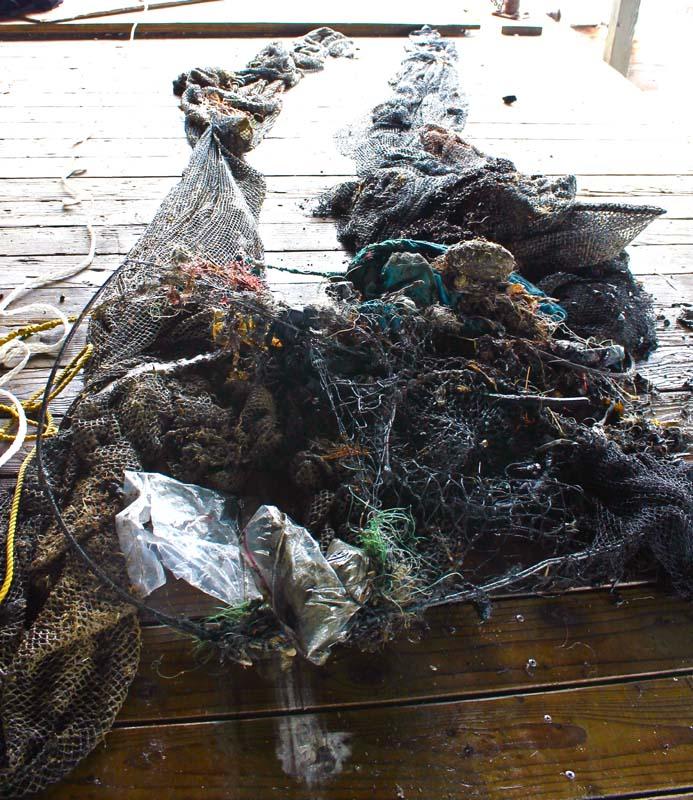 Abandoned net from under Newport Beach pierWith summer now in full swing, your ODA team finally got the chance to remove an abandoned net found by Jim McKeeman and Mike Coufer.

The deadly net was underneath the Newport Beach (CA) pier, and we’d been trying to remove it for 2 months! Unfortunately, high winds and big waves forced us to cancel 7 dives in a row. It felt like destiny that we removed this deadly net so close to World Oceans Day (June 8th), and we are thrilled to be able to accomplish this achievement for the seas!

Jim and Mike dive this site pretty regularly, doing research on giant sea-bass and looking for lost items near the pier that people inevitably lose to Davey Jones’ locker. Jim has found 5 Go-Pro’s over the last 2 years. Who says diving doesn’t pay?

As soon as I found out about the net, I contacted Dave Kiff, the city manager of Newport Beach, via email.  Within 10 minutes of sending that memo, I received a response from him with several people added to the email. One of those people was Mike Halphide, who is the manager of the Newport Beach Lifeguards.

I called Mike and we had a great conversation. He was very helpful, and got his staff to work with us to make sure we could get to the dive site, remove any debris we found, and give us access to an emergency ramp that is at the very end of the pier, underneath the main deck.

Last Sunday, June 5th, we gathered 13 people in the parking lot of the pier and talked about the best way to tackle this net. Since Jim and Mike Coufer had already seen it, they knew exactly how to approach it.

Team assembled to remove the net.

We soon had 6 divers in their gear, heading toward the water. They swam underneath the pier (about 200 yards) to avoid all the active fishing lines that were dangling from the fishing poles on the top deck. The divers were: Kim Cardenas, Al Laubenstein, Bill Maley, Walter Marti (underwater video), Jim McKeeman, and Dave Merrill.

Our deck crew consisted of: John Bello, Sam Lopez, Wendy Marshall (photographer and provider of the images we’re sharing!), as well as Steve and his wife. 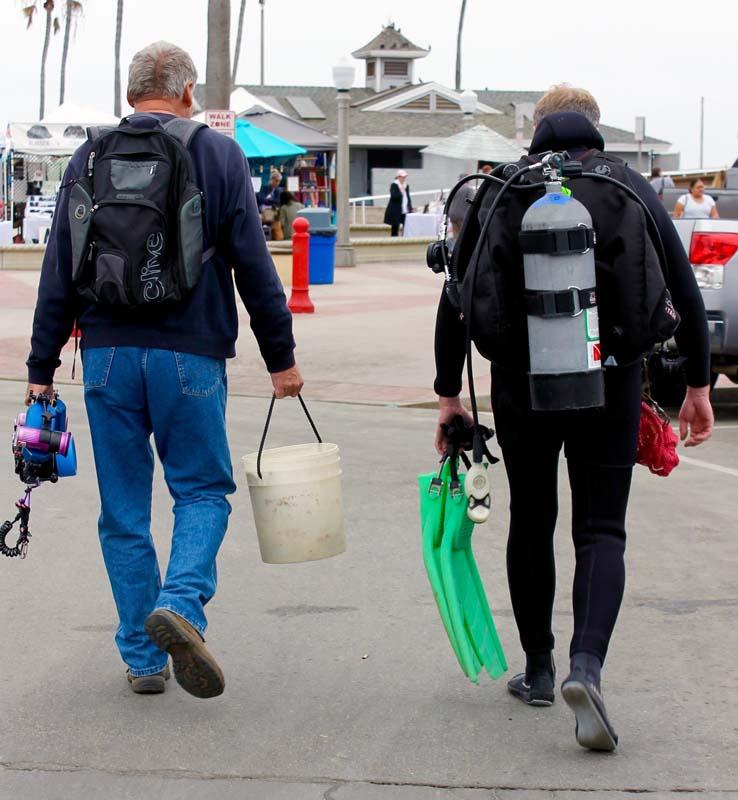 Divers getting ready to remove net. 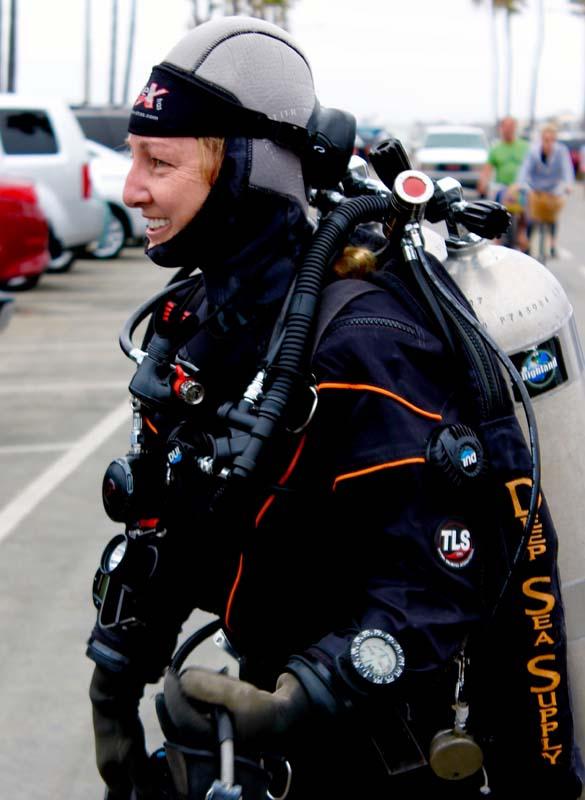 As the divers headed into the surf, a lot of curious people approached the team to find out what they were doing. As they learned about our mission to protect the oceans, they became “instant ODA fans” and several of them asked for photos with the crew; others thanked us for our service. We all agreed that although we are here for the sole purpose of protecting marine life, it still felt good to be acknowledged so warmly by so many. 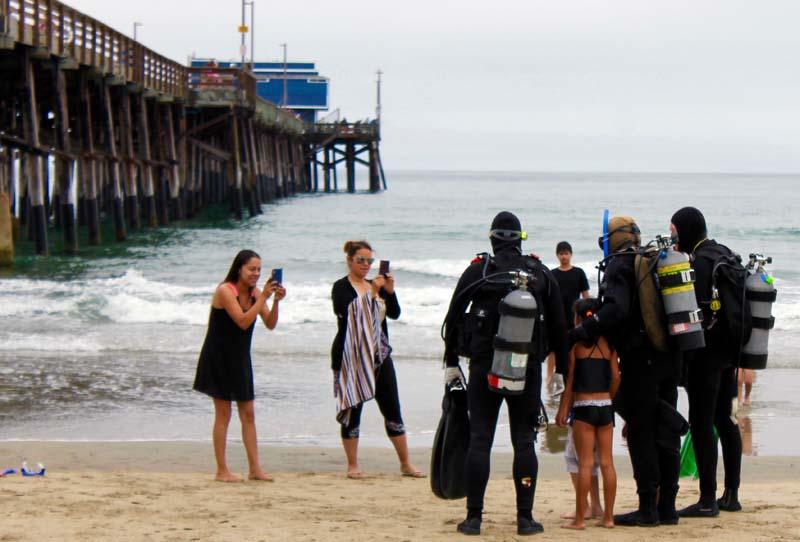 Current and future ODA crew pose just before the dive.

As soon as the divers were underway, the deck crew made its way toward the end of the pier with lift bags and lines for us to hand the dive team when they got to the site.  Mike Halphide told me it would be alright to ask anyone that was actively fishing within 100 feet of the divers to remove their hook and lines for the safety of our crew. We didn’t want anyone to become accidently hooked! All the people fishing readily removed their poles and were very curious about what we were up to. We also drew attention from local wildlife, some of whom seemed to be critically overseeing our work!

As soon as the divers dropped beneath the water they found the net. It was tightly wrapped around one piling and stretched northward to another piling. These are ideal conditions for a sea lion, fish, or seabirds to become entangled in.

Within minutes of the first lift bag coming to the surface, a boat with 2 lifeguards on it joined us at the scene. They stayed for the entire time it took us to remove the net. It was especially nice to have such dedicated professionals standing by in case something went wrong (though nothing did). Thank you Newport Beach Lifeguards: You guys and gals ROCK!

Wildlife took an interest in the operation. 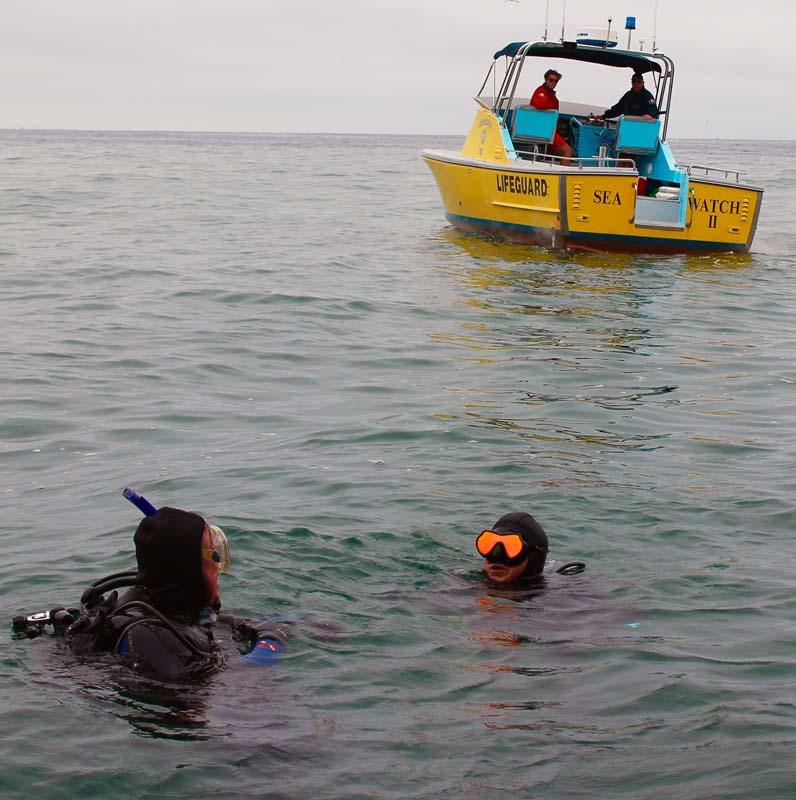 Divers in the water

When the lift bags started breaking the surface, the deck team quickly grabbed the bags and started hauling the net up and out of the water. It was a squid net; these have a small mesh size and are made of nylon. This is the exact kind of net that scientists estimate will last 650 years in the water...killing the whole time, and releasing toxins into the water as they very slowly degrade.

Squid net from under the Newport Beach pier 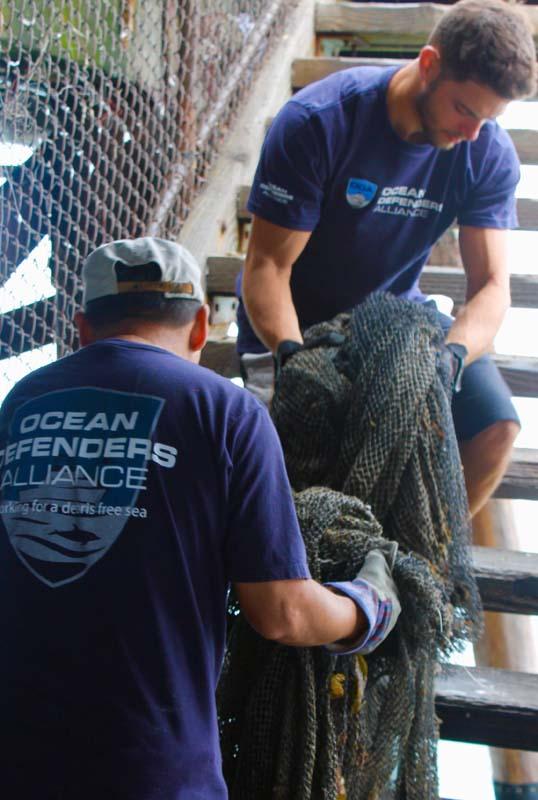 Hauling the net from under the Newport Beach pier

At one point Al came to the surface with another find. They had located a lobster trap with a bunch of lobsters in it. What, you might ask? How could that be? The end of lobster season was way back in March! Well, it turns out this was a poachers trap. There were chicken bones in it meant to lure lobsters in. The trap had a very thin string attached to it that went between the trap and one of the pilings. 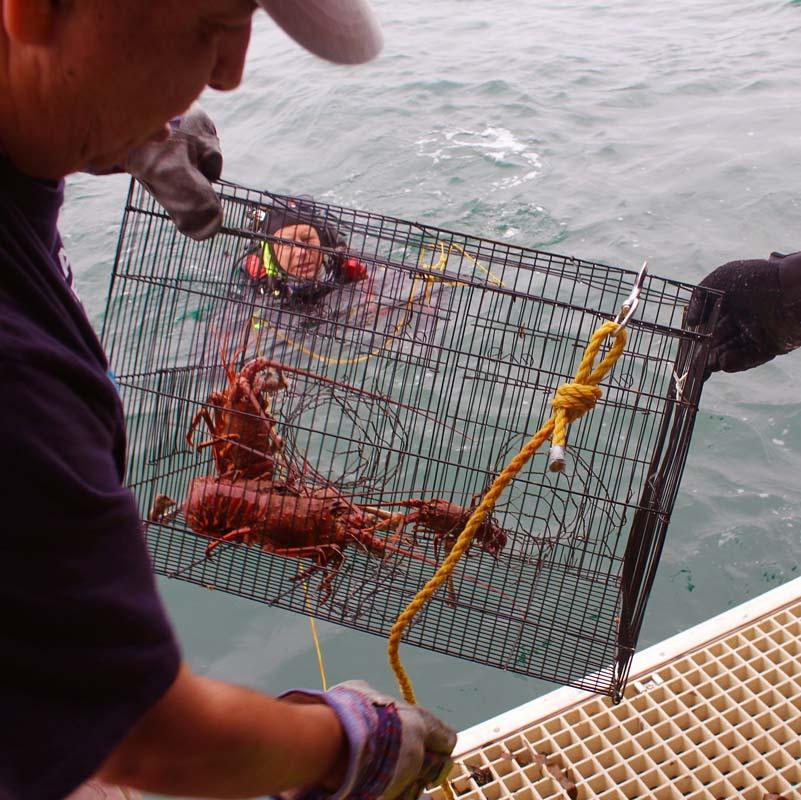 Illegal lobster trapThere was no way that string could pull up that trap. So, what the poachers were doing was swimming out to the site, locating the string, and then swimming down to the trap to remove the lobsters. Does this make you as angry as it makes me? GRRRR!

Anyway, when we got the trap to the surface there were 4 lobsters still in it, and more had escaped on the ride up.

So, in this one dive we removed about 300 pounds of net, 2 lobster traps, 2 fishing poles, too many fishing lures to count, 3 pairs of sunglasses, and a large fishing knife. We also freed 8 lobsters, a rock fish, lots of little crabs shrimp, and quite a few octopi.

What a GREAT day it was, and to have 13 people show up to lend a hand was a real treat.

I offer my sincere thanks to all who participated, our wonderful and faithful donors, AND the great lifeguards that helped us defend ocean life. The marine habitat underneath the Newport Beach pier—all everything that swims or crawls through that area—can breathe a sigh of relief now that the net has been removed.

No more animals will be dying a slow death due to entanglement in that net, and THAT is a fabulous way to celebrate World Oceans Day, don’t you think?

PS: Wherever you are, you can help us continue this life-saving work! Will you donate today to protect ocean life? 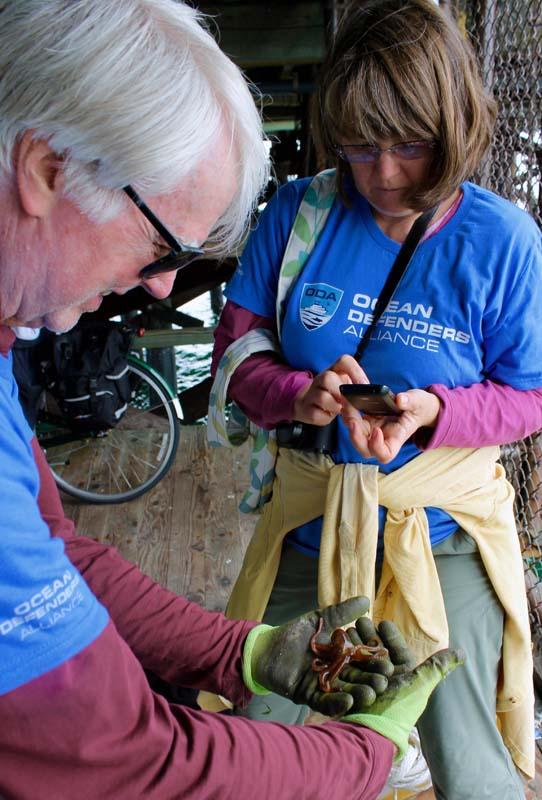 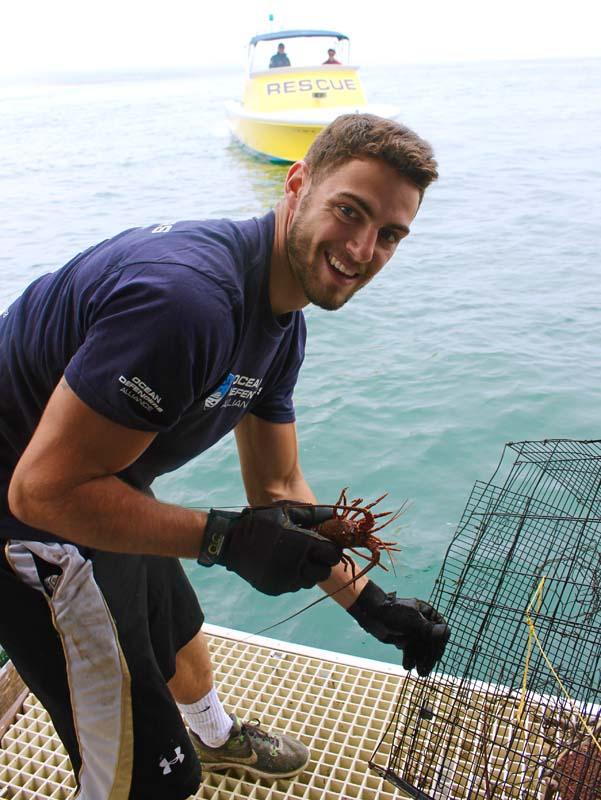 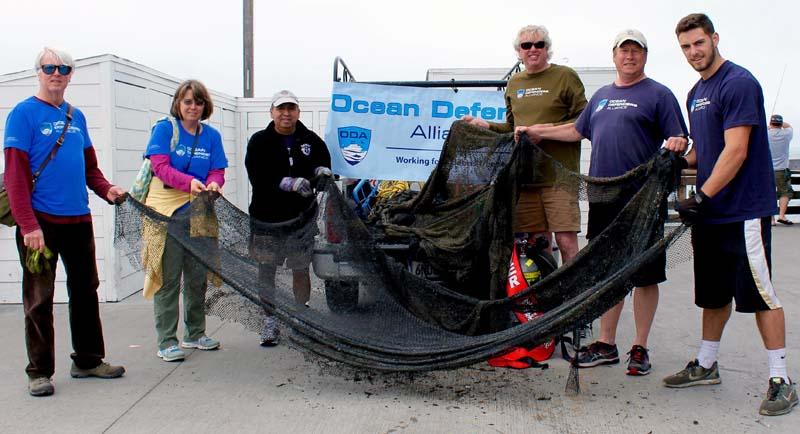